The fallen log is the upper portion of a dead red maple tree that broke off some years ago. The broken end of the log is up in the air a bit while the other end, to the rear of the camera, rests on the ground. It’s been a productive spot the have a camera trap, the first video from the fallen log was posted here and others have been posted more recently.

Here are the best videos from last fall –

That large antlered buck is what is called non-typical since his two antlers are not symmetrical. He appeared before the camera trap three times, always going in the same direction and at the same distance from the camera; at first glance the clips appear the same, but there are subtle and not so subtle differences. 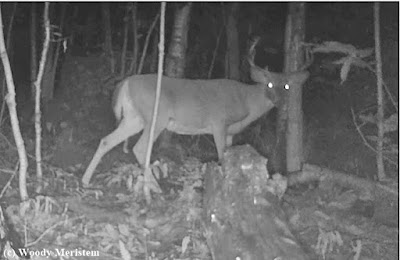 Although eastern coyotes have been caught by this camera trap in the past, they made multiple appearances this fall. At one time six of the animals were there at one time, probably a breeding pair and four almost-full-grown pups.

So the camera trap will stay at the log for the foreseeable future.

Posted by Woody Meristem at 8:42 AM

What a haul! Great visitors!

Great captures on the wildlife cam. It seems like the coyote population is increasing. I love the Owl and Pileated Woodpecker. Thank you for linking up and sharing your post. Have a great day and a happy January! I wish you a happy and healthy New Year!

I always enjoy seeing your videos! I'm off to wander in the woods this afternoon and hopefully see some deer. Happy new year!

Happy New Year Woody! I really love how you put together these videos! Loved seeing the deer hop the log and the owl. Such a wonderful spot to catch critters on video! Thank you so much for sharing!! ☺