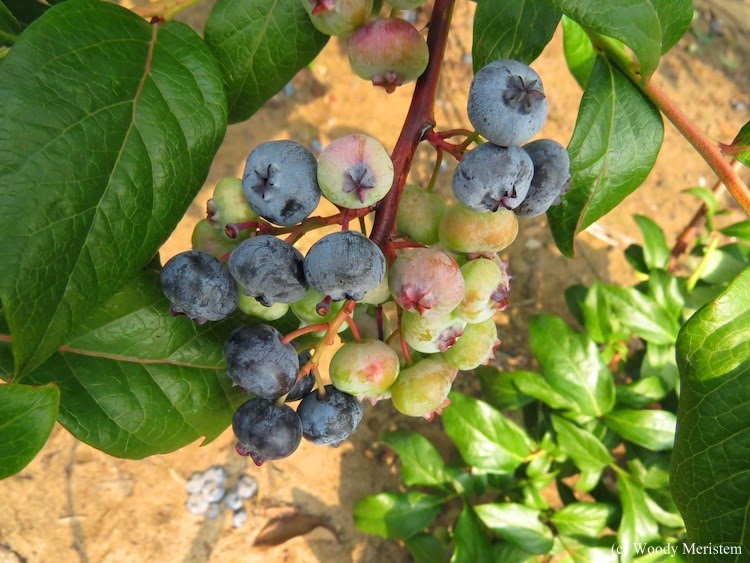 At the berry farm there are strawberry, red and black raspberry and blueberry plants galore, but this day we were after blueberries. Since it promised to be a hot day, we went fairly early in the morning and in just over an hour picked 20 pounds of blueberries. 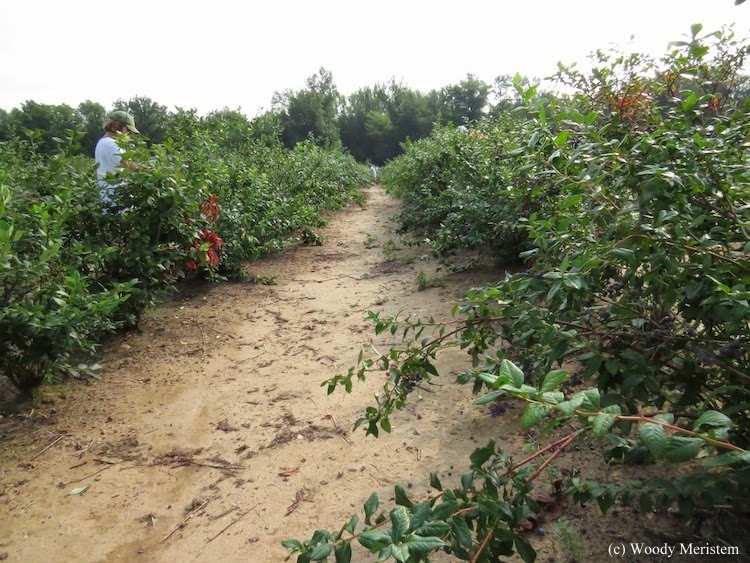 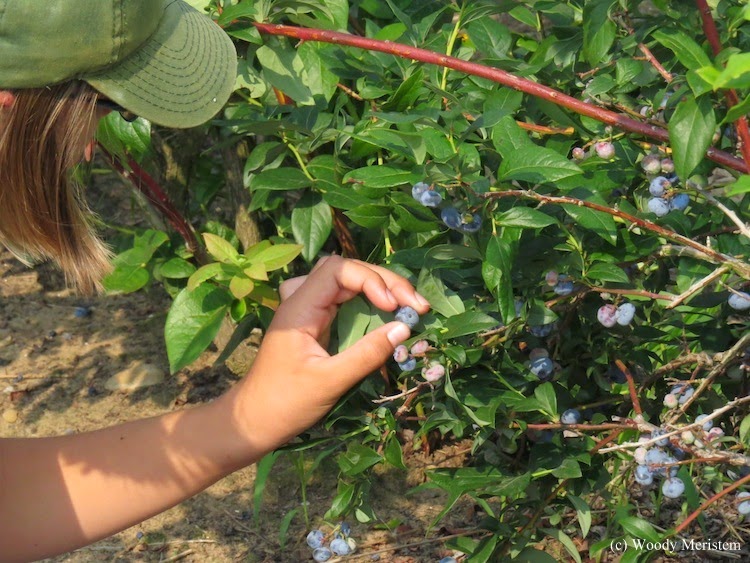 Some of the berries went home to Mom and Dad, but most went into our freezer to supply blueberries for pancakes, muffins and cakes. We’ll have to go back to get more before picking time is over or we won’t have enough blueberries to last the winter.


It’s a pleasure to buy locally grown food and support nearby farmers who, in turn, support local businesses when they purchase supplies and equipment. Buying from local farmers gives them an economic incentive not to sell their land to have it turned into habitat for McMansions or parking lots for big box stores. One of the area’s supermarkets also buys fruit and produce locally, supporting local agriculture and keeping their own transportation costs down. 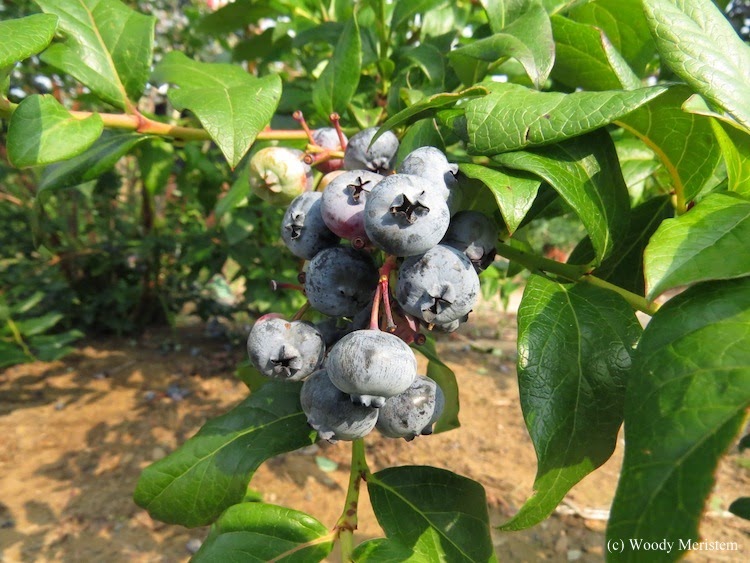 How much better to purchase locally grown food rather than blueberries flown up from Chile or lettuce trucked across the country from irrigated fields in drought-stricken California. Unfortunately, some of the finest agricultural land in the area has already been put under roof or pavement. “There ought to be a law” say some – but there ain’t.
Posted by Woody Meristem at 6:53 PM No comments:

Wildlife activity seems to have been pretty low lately – hot humid weather has the same effect on wildlife as it does on us. It hasn’t been extremely hot, but for many days the humidity has been truly oppressive, so I checked my camera traps in the cool of the morning.

Had a couple of photos of a bear – 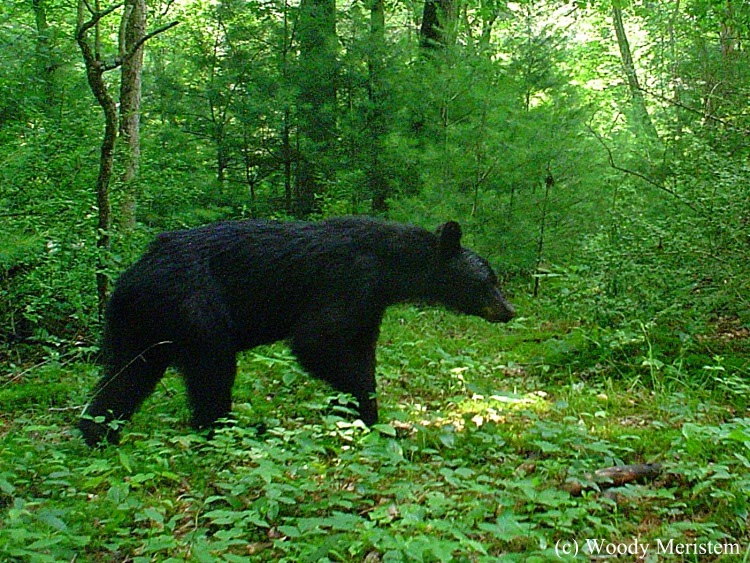 and an opossum, but surprisingly most of the photos were of bucks, from a young one with small antlers – 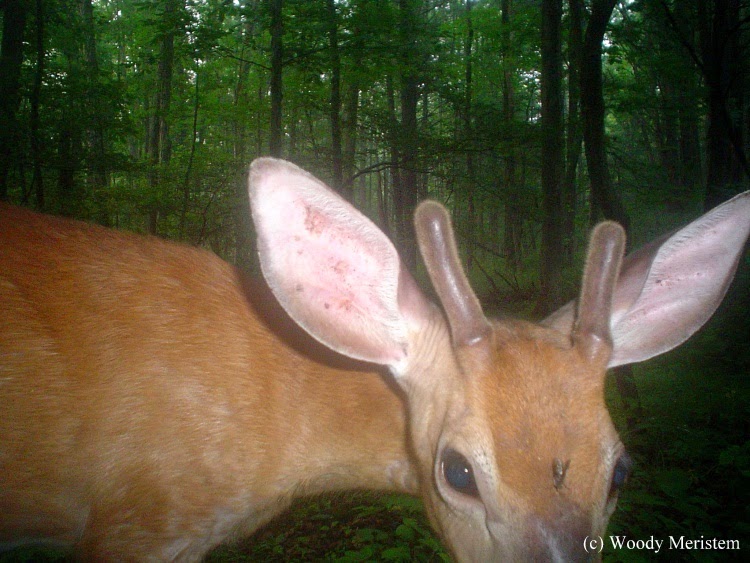 To bucks with larger antlers – 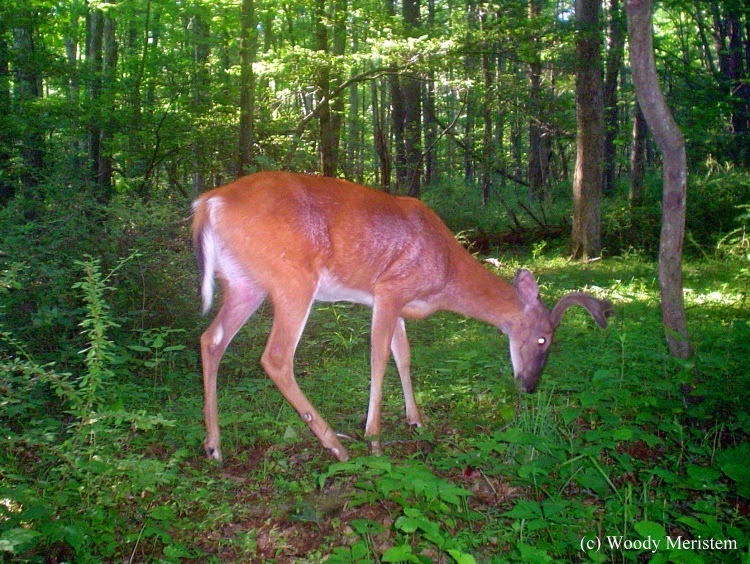 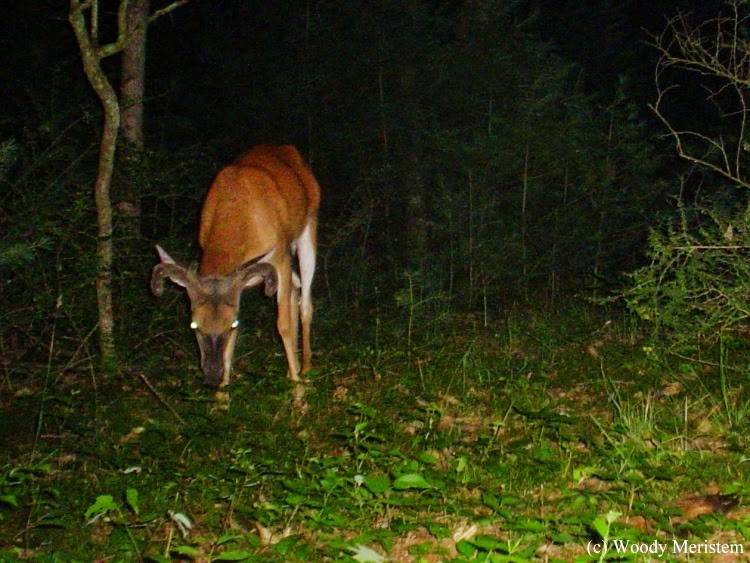 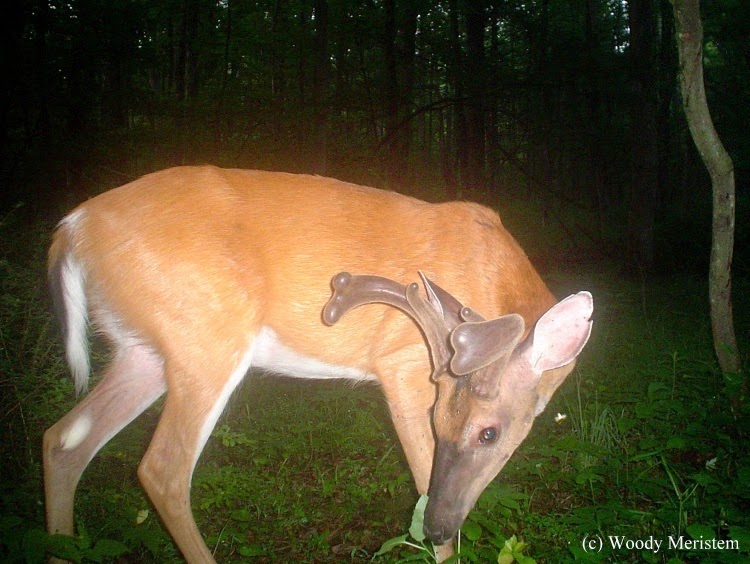 The buck in the last picture was even caught in what would have been a regal pose, except he chews with his mouth open. 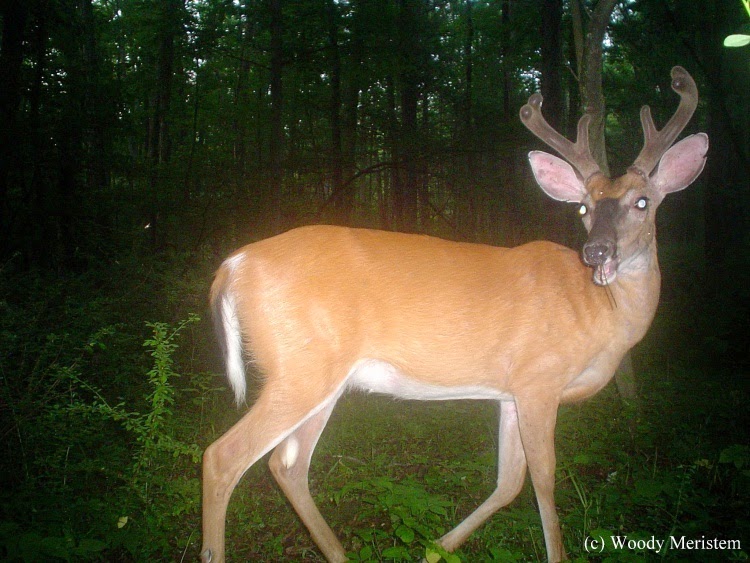 A few miles away, a camera trap caught a buck that looks almost identical. But it’s not the same deer; even if distance didn’t preclude them from being the same animal, a look at the brow tine on the right antler shows they are different bucks. 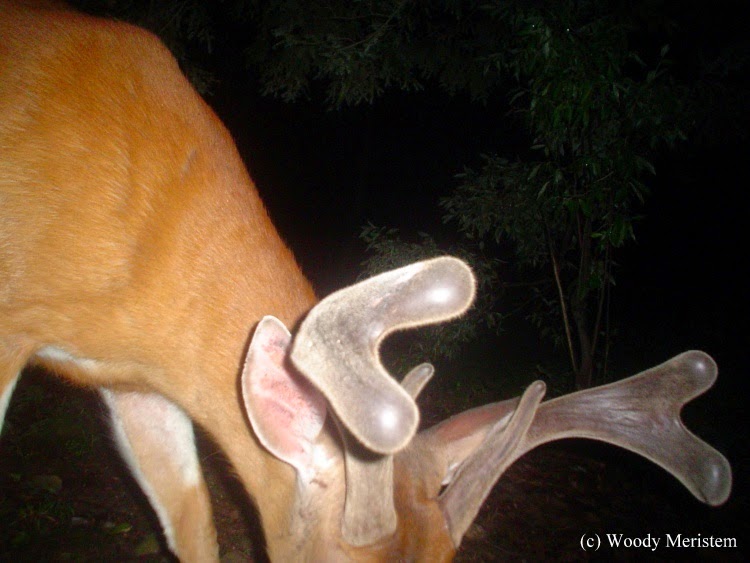 The camera trap also caught another buck; this time it was one that was probably less than a month old standing beside his mother. 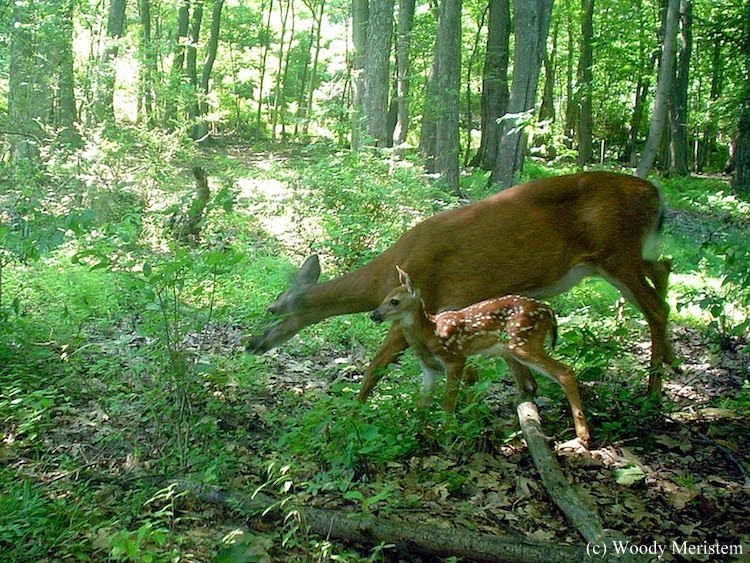 By zooming in on the photo the tiny buck’s diminutive pedicles can be seen. 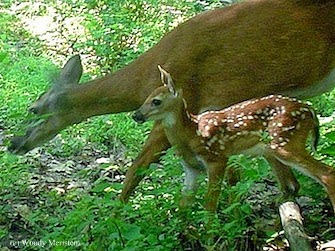 Posted by Woody Meristem at 5:58 PM No comments:

‘Twas a beautiful day, temperature in the 60s, crystal clear, with a gentle breeze and we were riding our bikes on the Pine Creek Rail Trail. There are a few benches along the trail at irregular intervals, some with good views of the surrounding hills or overlooking the stream. We were sitting on one of the benches, taking a break, when my wife saw a mink in the water.

The mink was swimming and diving like a small otter; then it would climb out onto a rock, dive back into the water and occasionally swim into the patches of emergent vegetation along the shore. 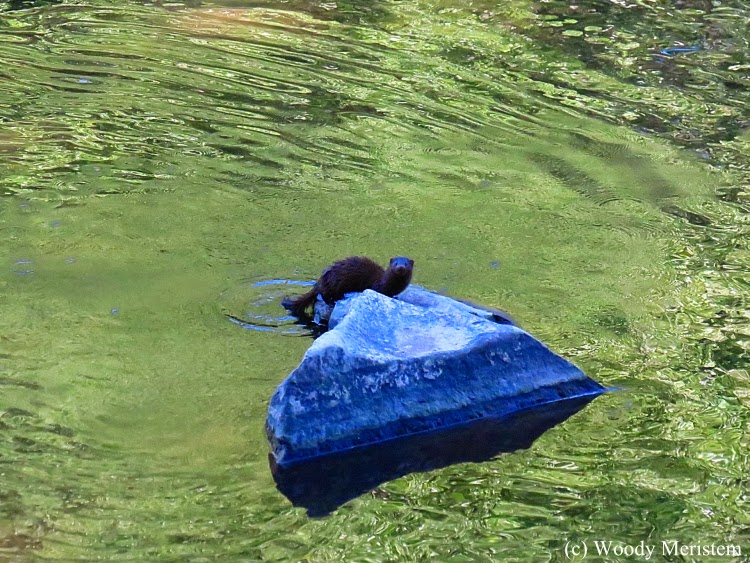 It spent the majority of its time swimming rapidly underwater seemingly at random, but probably in pursuit of small fish. Once it emerged with something dark in its jaws, probably a crayfish, but ate it so quickly that we couldn’t tell what it was.

It eventually climbed onto a rock long enough for me to get a few photos before it dove back into the water, swam rapidly downstream and disappeared 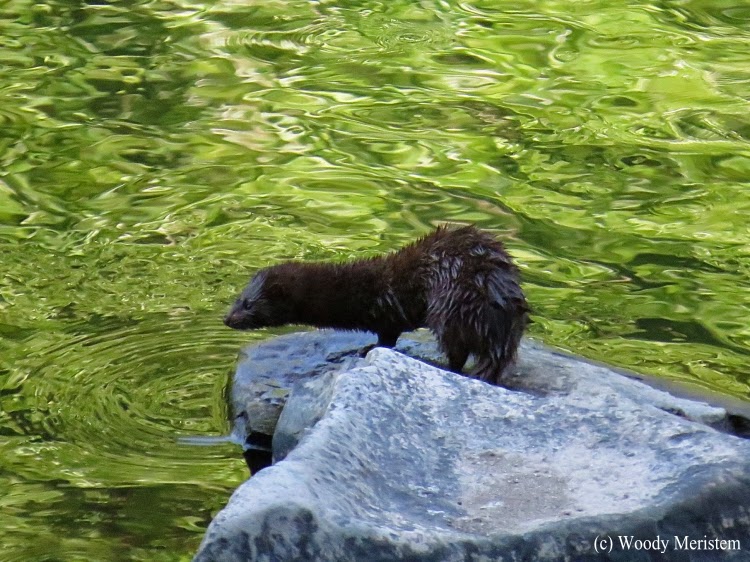 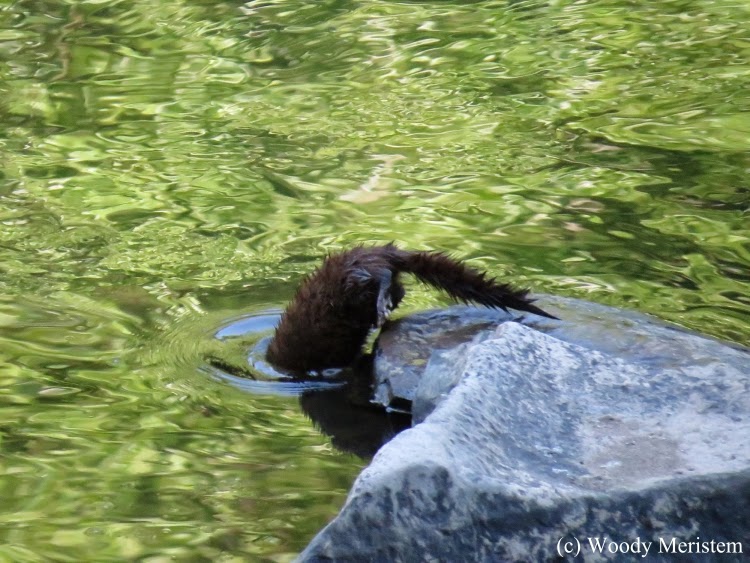 Whenever it was on the surface I tried squeaking like an injured small animal in an effort to get the mink to hold still for a moment or even to come closer  - to no avail.

Other mink have been much more cooperative and reacted to squeaks. This one even came closer in spite of the fact that it was already carrying prey – 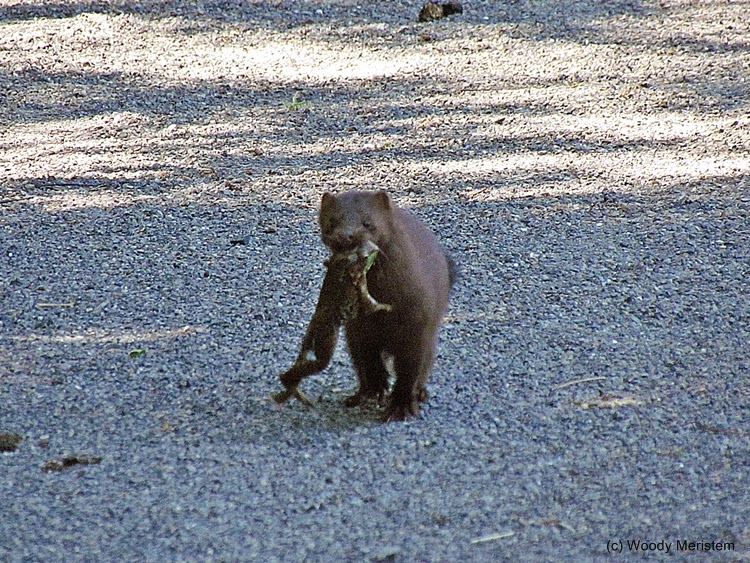 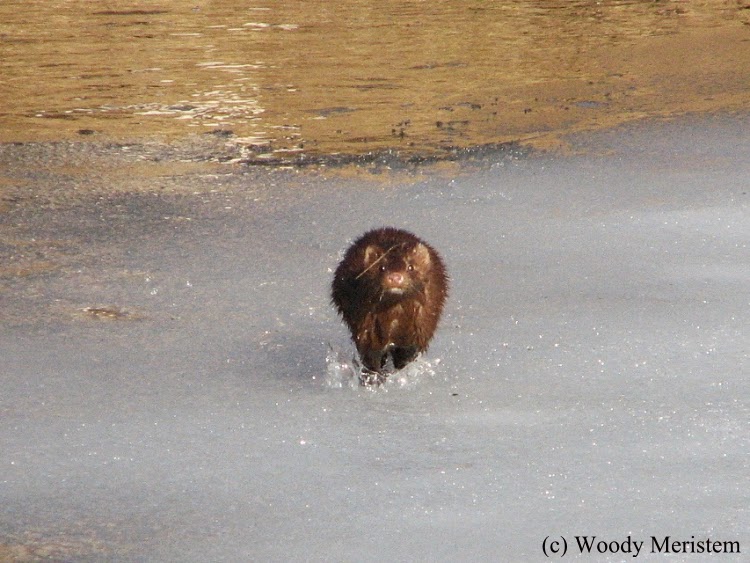 Posted by Woody Meristem at 2:33 PM No comments:

A few weeks ago on a gray blustery day with some mist in the air I walked through L’s woodland to see what I could see. In places the tall trees were festooned with grapevines that must have had a good crop of grapes last fall – turkeys had scratched beneath each tree where grapes grew.

When I stopped to look around a bit, something on the ground that was lighter than even the palest fallen leaf caught my eye; it was a tine from a white-tailed deer’s antler. I went over to look and it turned out to be an antler shed last winter. A nice 4-point but not heavy or large, so it was probably from a buck that was two and a half years old last fall. 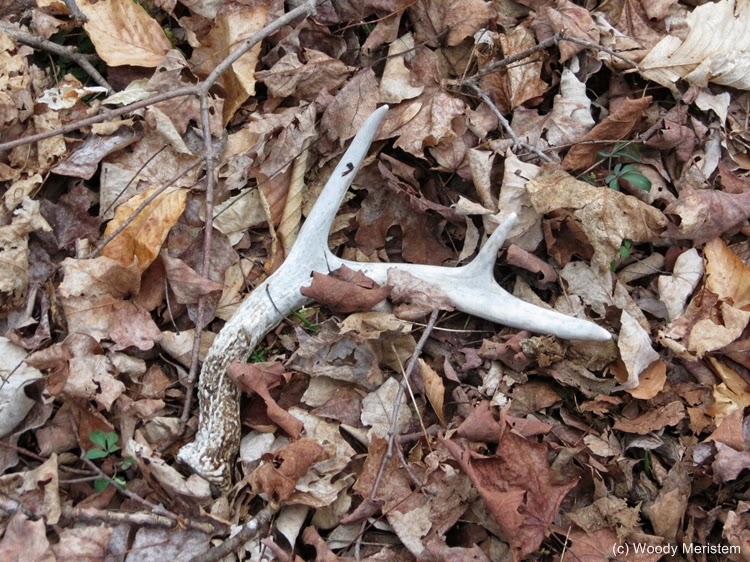 The antler showed no evidence of gnawing by squirrels, chipmunks or mice, unlike many I’ve found over the years. Rodents usually find shed antlers quickly and gnaw on them both for their mineral content and to keep their own ever-growing incisor teeth worn down. 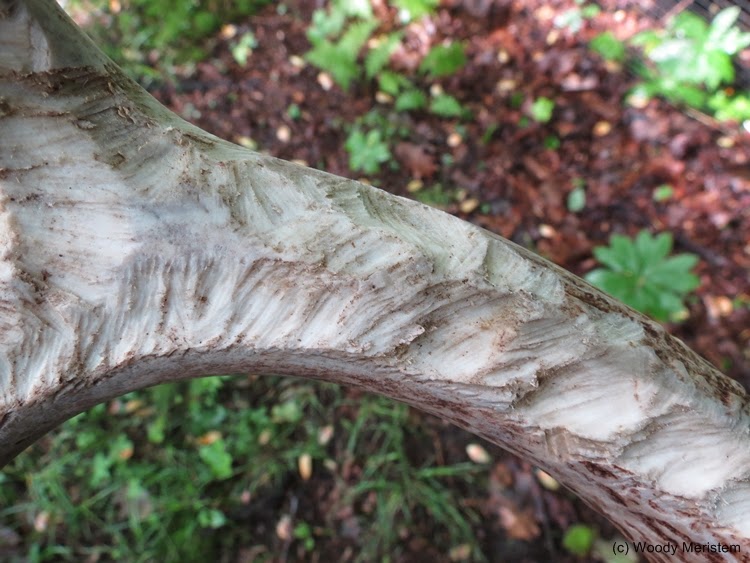 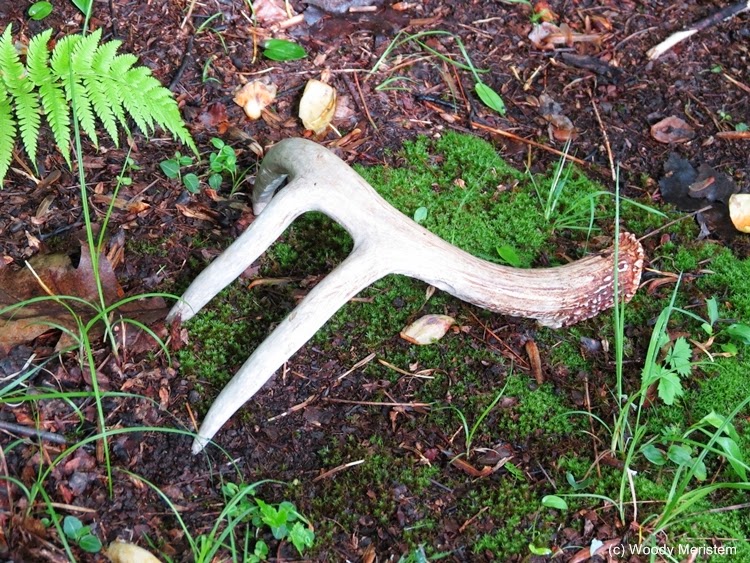 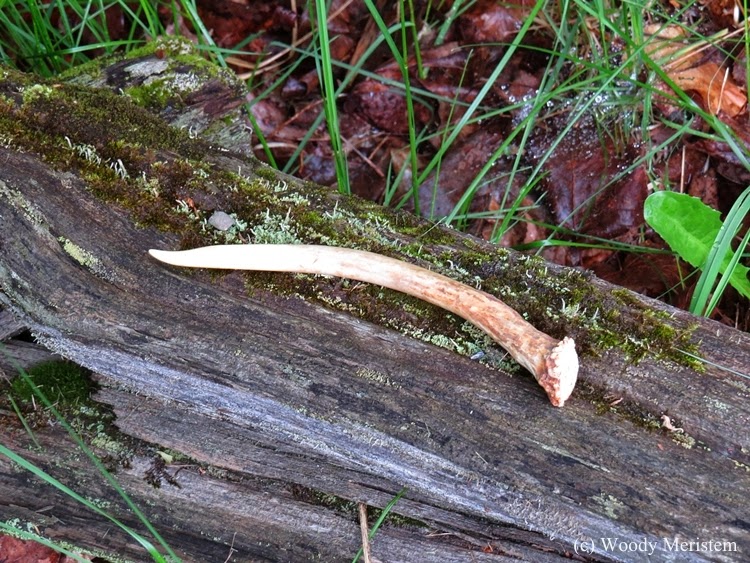 Once, while looking at a large property I stopped to take a short break, looked between my feet and there lay a shed antler – 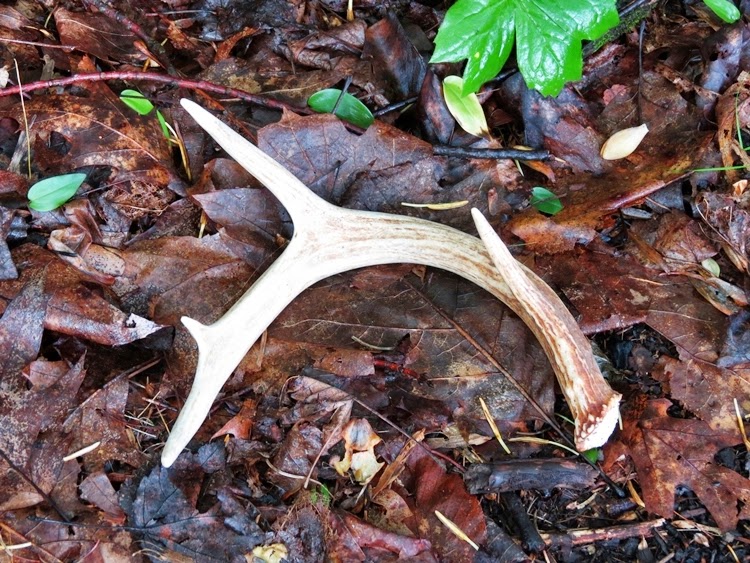 and less than 24 inches away was its mate – 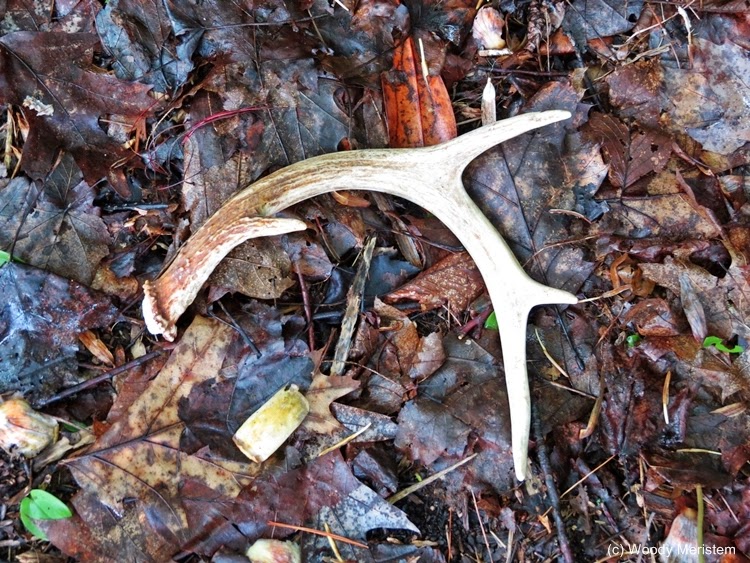 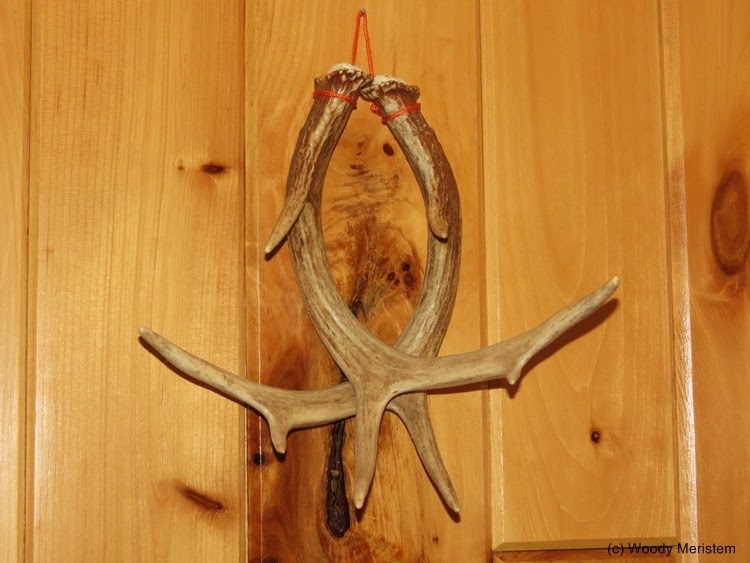 I’m not a shed hunter, only gathering sheds that I come across by accident, but some folks are active shed hunters and spend hours afield as soon as the snow melts looking for them. An acquaintance has an extensive collection of sheds that he's found over the years. Many of them are of impressive size – truly significant since each of the bucks that bore those antlers survived the previous hunting season. Actually, the bucks must have survived multiple hunting seasons in order to grow some of the large antlers in the collection. 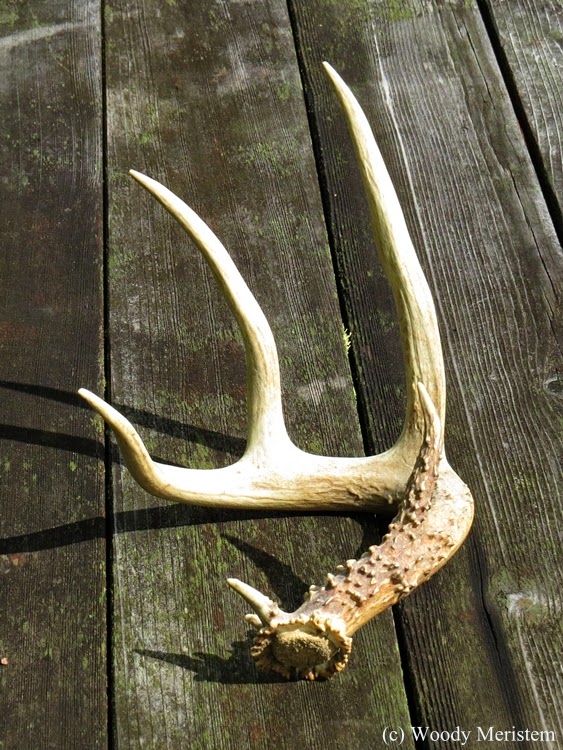 Posted by Woody Meristem at 5:37 PM No comments: