More from the Beaver Pond 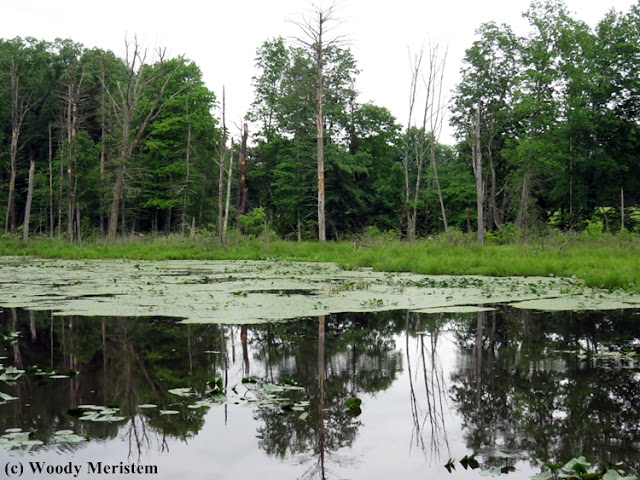 Beaver ponds are fascinating; they provide habitat for an abundance of wildlife from frogs and dragonflies to deer and bear, most of which then attract many other species as well as naturalists, fishermen, hunters and photographers.


Earlier this year I’d put a camera trap on the shore of a beaver pond near the beaver’s lodge. Photos from the camera were posted here. At the beginning of June that camera was replaced with another camera mounted on a different tree. The new camera takes videos during the day and still pictures at night.

A few weeks later the camera had yielded photos and videos. First the still photos, beaver – 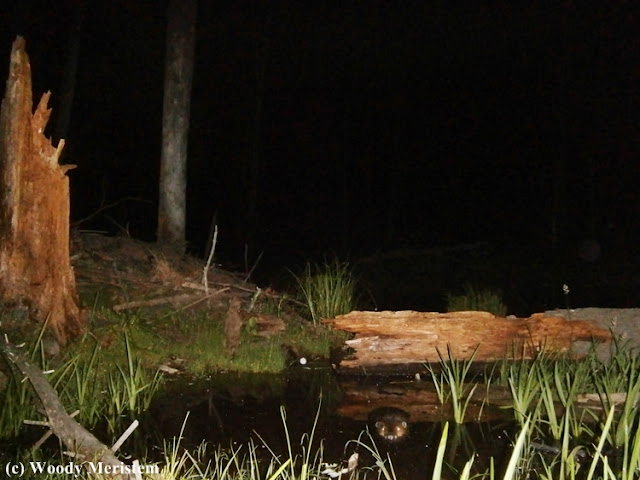 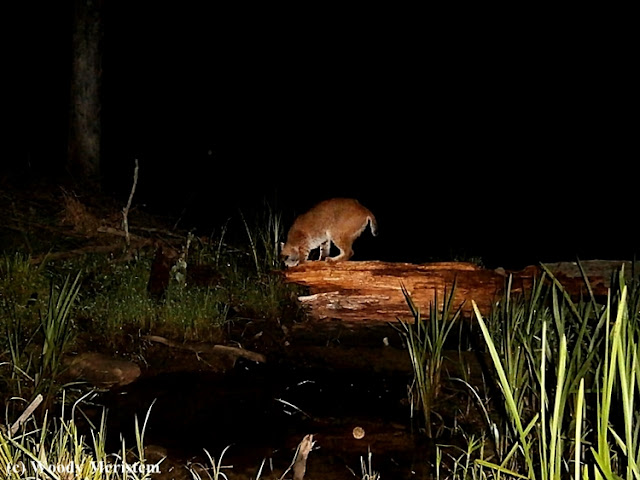 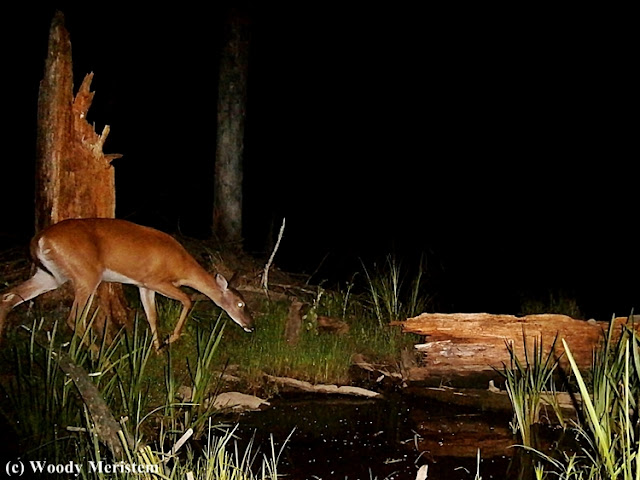 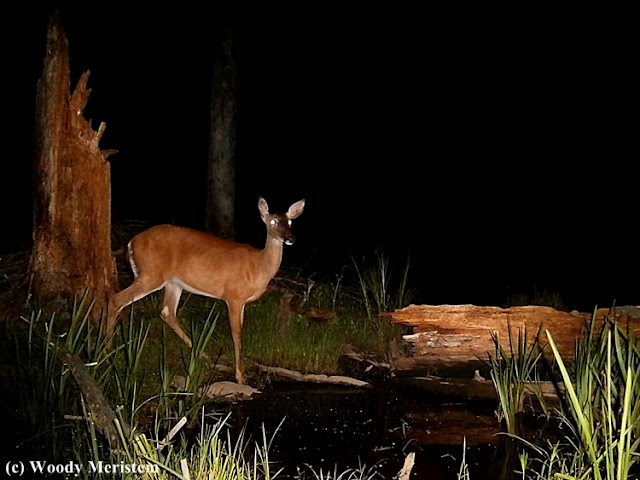 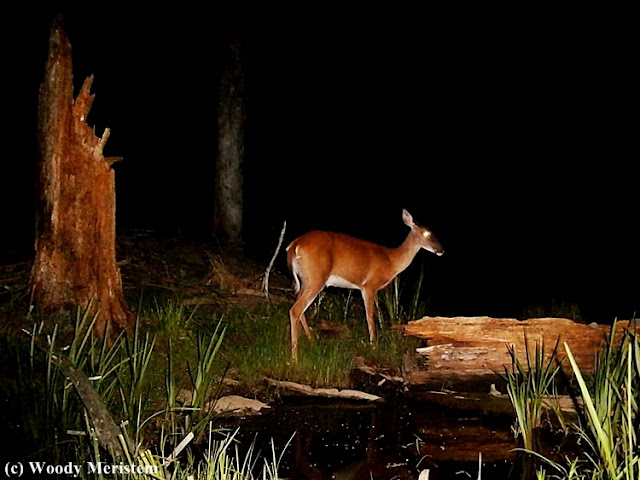 And now for some of the best videos –

Did you see the splash from the beaver's tail slap? If not, it occurs at 55 seconds into the video and again at one minute 23 seconds.


What will the heat of the summer bring to the beaver pond? We’ll see.

One week, seven days – only one week among many. There was nothing really special about those seven days in May, just an average week in forest and field – a week to see and experience the natural world in northcentral Pennsylvania.


Day 1 – Walking in the rain – everything dripping wet, including me. The Big Woods were quiet except for the drip, drip, drip of the rain and the sound of a nearby brook. Next to a decaying log several sweet white violets were in bloom – 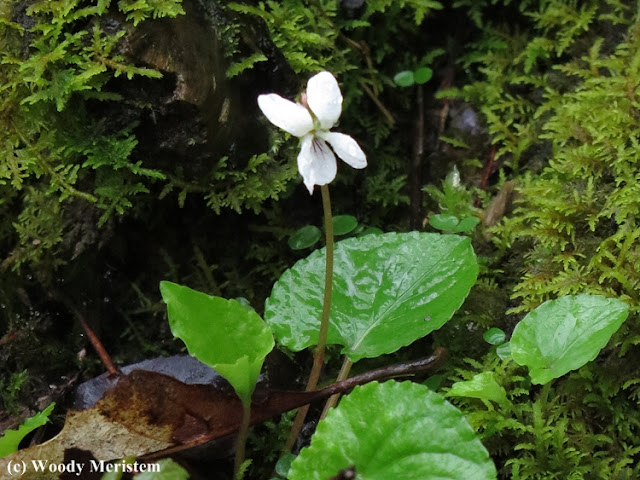 Day 2 – Still raining. In the ravine of a small stream a profusion of purple trillium were in bloom. But the flower on one of those purple trilliums wasn’t purple, it was a yellowish-white (or whitish-yellow if you prefer). A small percentage of purple trillium produce white or yellow flowers, they’re few and far between and it’s always a treat to find one.
Unfortunately, this flower was past its prime, but still a great find – 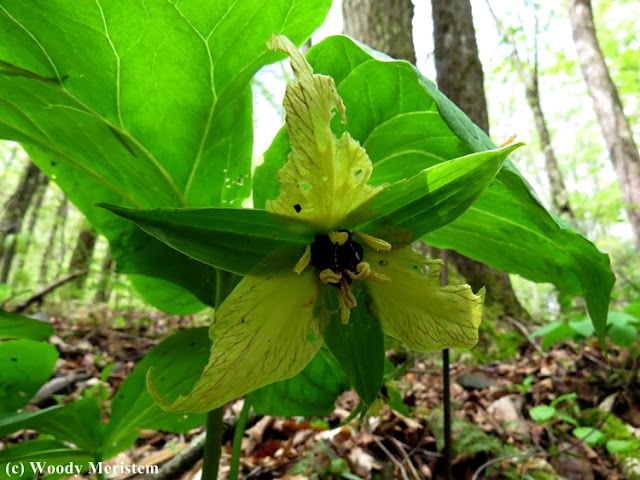 Day 3 – Walking along the border between a hayfield and woodland I came across a black rat snake; a large one, about 5 1/2 feet long, one of the largest I’ve ever seen. The snake quickly assumed a defensive posture: widening its head and body, rearing back as if to strike and rapidly vibrating its tail producing a sound resembling that of a rattlesnake. The snake crawled rapidly toward the woods and smoothly ascended the low-hanging branches of a shrub to lie on a horizontal stem. 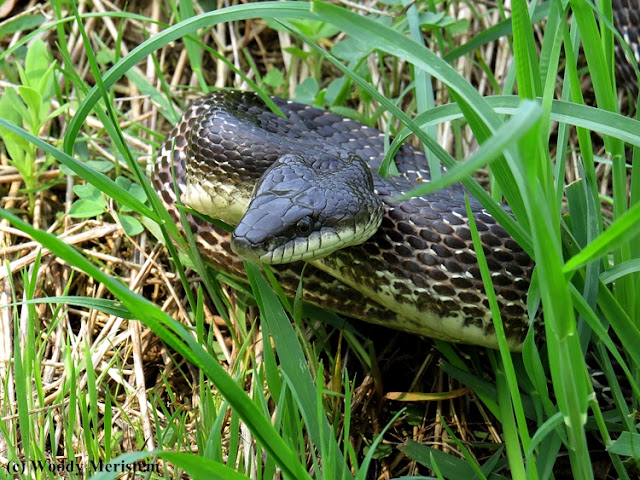 Day 4 – Heavy rains during the last few days brought a sudden flush of fungal fruiting bodies including some interesting mushrooms. There are a number of species of mushrooms collectively lumped under the common name of “inky caps”. On this damp day there was an abundance of small inky caps in the mulch along a wooded path – 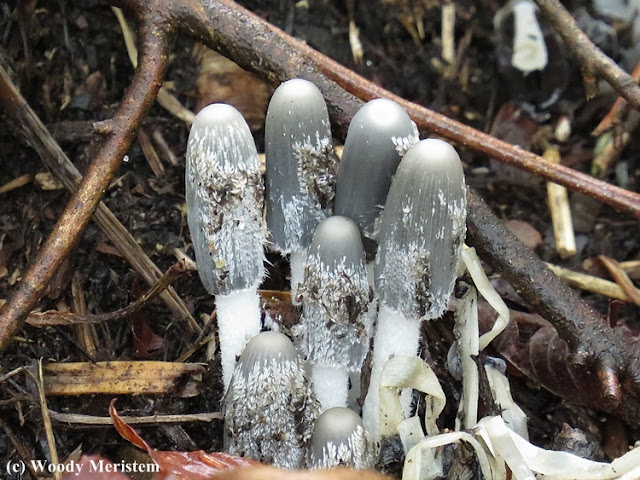 Day 5 – The rains have finally abated and in a hayfield a beautiful orange and black butterfly visited one dandelion after another. It was one of the large group of similar-appearing butterflies called fritillaries. Comparing the photographs to illustrations in a field guide revealed it to be a silver-bordered fritillary – 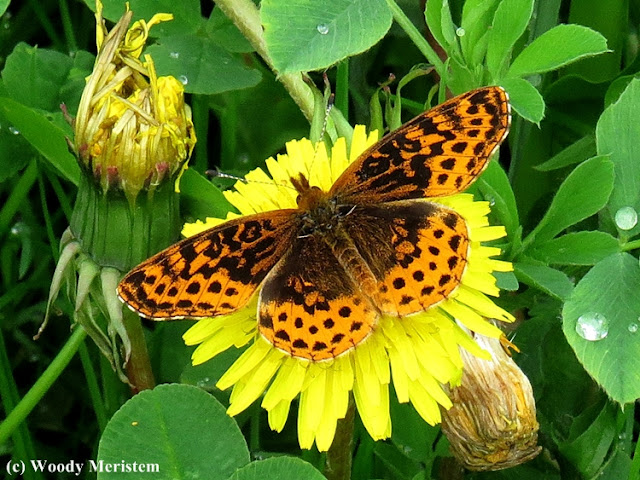 Day 6 – Today I walked along the edge of a small wetland where a male Carolina saddlebags dragonfly was perched on a dead plant stalk. It made periodic forays to chase off another male that was regularly encroaching on the 25-30 feet along the edge of open water it had claimed as its own. Carolina saddlebags are usually considered “flyers”, spending most of the day on the wing, but this male repeatedly returned to the same perch. 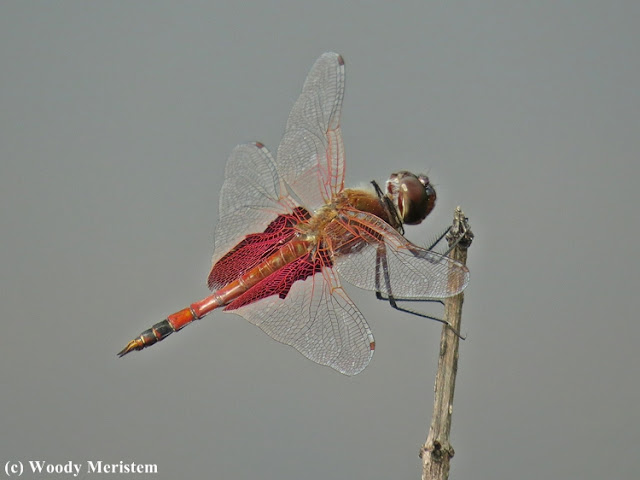 Day 7 – Rain again, virtually all day long. Raindrops hung from needles of the white pine, the fresh green leaves on the trees and shrubs, and the twigs of the apple tree, the drops reflecting the scenes around them. Almost four inches of rain fell at the house that week and the streams were bank-full after a winter of little snow and dropping water levels. 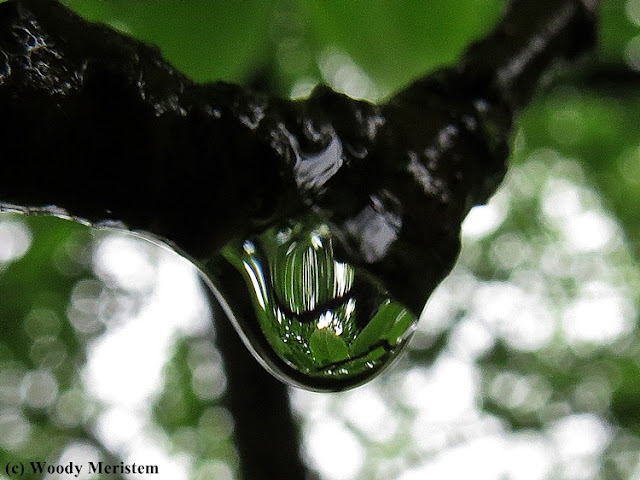 There’s always variety in the natural world – all we have to do is look.
Posted by Woody Meristem at 4:44 AM 3 comments:

Bear in the Night

In 2005 I photographed a black bear out behind the house for the first time. That certainly wasn’t the first time one had been there – on a rainy day a few years before we had found the wet footprints of a bear that had walked through our breezeway. 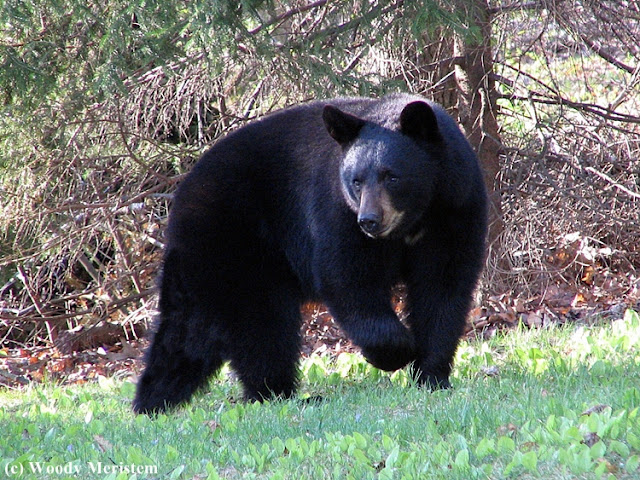 Several years later I began keeping a camera trap or two behind the house. A bear has been photographed by a camera trap once or twice a year almost ever since those camera traps were put in place –


In 2017 the camera traps didn’t catch a bear, but one appeared again this spring. It seemed to be a different individual since it was much smaller than the one that had so often been photographed here. 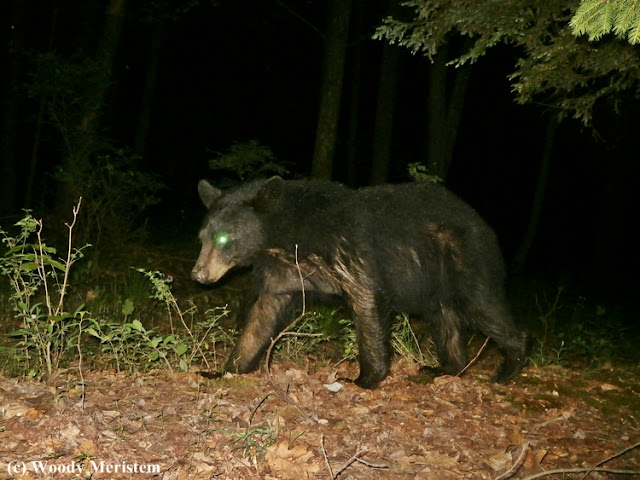 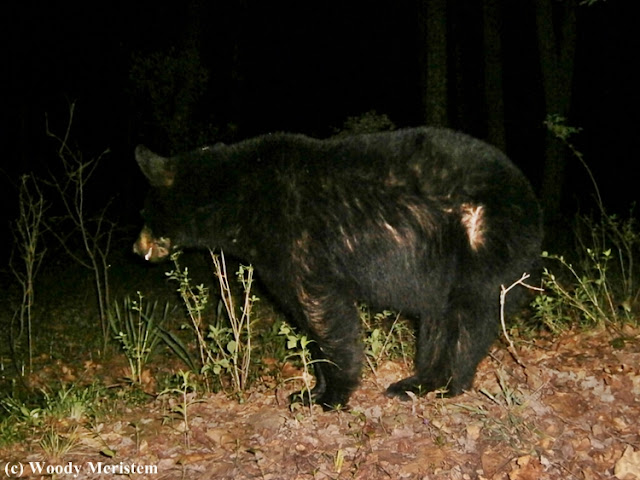 This time, in addition to the still cameras with the white flash, one of the camera traps took infrared video of the visitor –


We don’t mind our visitors; they almost always come in the night and except for occasionally scattering a few things from the compost pile barely leave a trace of their passing. The neighbors would be alarmed if they knew of the visits by the bear so we keep mum.
Posted by Woody Meristem at 4:23 AM 3 comments: