A camera trap has been watching a small opening in a brushy forest since 2013 and has only missed a few months in all that time, chiefly after a photo has shown a human walking past and the camera has then been removed for a while lest it disappear. My cameras are usually checked at monthly intervals; the memory card changed and the batteries replaced with freshly recharged batteries.


The camera’s location is in what was once an agricultural field, but that was over a century ago. As is the case with almost all abandoned fields in northcentral Pennsylvania, the field was then gradually occupied by trees after it had first become a field of goldenrod. Now some of those pioneer trees are quite large while others trees are small, having begun growing much more recently.


When this camera was checked it had taken 386 videos during the month of April, primarily gray squirrels and cottontail rabbits, but also a number of other species. This location has been very productive of interesting photos and videos, including those of the mammals attracted to a small hole in the ground as seen in this post.

Now, three years later the opening and the hole are still attracting wild creatures. Here’s a sampling of the most interesting of April’s videos. Many of the mammals left their calling cards by defecating, urinating or scent marking in or near the hole.Did you notice the porcupine scent marking the two small woody stems by straddling and walking over them at 4:25 into the video?


This has been a great location for a camera trap so I’ll probably keep one there for a long, long time.
Posted by Woody Meristem at 5:46 PM 7 comments:


What most people don’t realize is that, in almost all species, those new leaves have been there since last fall, tightly furled in the buds that adorn the tips or sides of the twigs that rattled in winter’s winds.


Some species leaf out much later than others: ash, walnut, sycamore and black locust are examples. Years ago one of our neighbors cut a beautiful white ash tree because “it was dead” – only it wasn’t dead, it was just leafing out later than the other trees at his place because it was an ash. 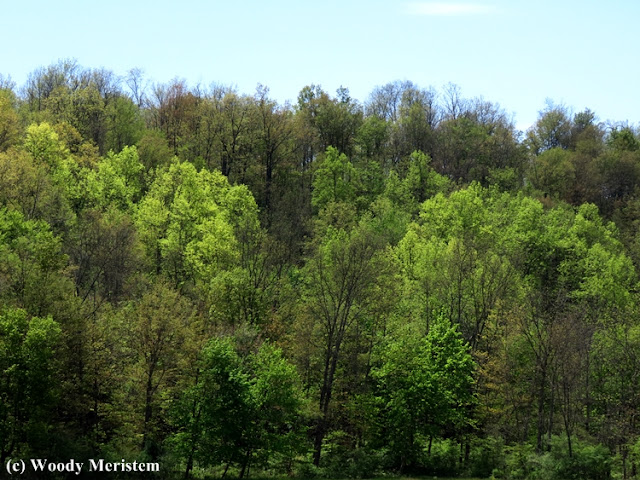 Newly expanding leaves are miniatures of the leaves we see in summer and come in varying shades, giving the hillsides a variety of color that will soon blend into the uniform green of summer. A sampling of new leaves –

Depending on where you are, it may already be too late to enjoy the sight of these small leaves before they expand to their full size, but they’re worth examining next spring.