In the farming country on the edge of the Big Woods there’s an area of a few hundred acres that’s too wet to farm although, over the years, some folks have tried. They even channelized a stream, straightening and deepening the stream to hurry the water on its way downstream. Farming ended more than 70 years ago, but the stream still gently flows through woodland that is occasionally flooded in spring.

When I found a faint trail containing deer tracks that crossed the stream the temptation to put a camera trap at the crossing was too strong to resist. A camera trap has now been at the crossing for about two months and the results have certainly justified my decision to place it there. A sampling of photos from the crossing –


The camera trap will remain in place at least until fall to capture photos of the wildlife that uses the stream or crosses the waterway there.

Posted by Woody Meristem at 5:23 AM 5 comments:


It was about 10 o’clock in the evening when my wife happened to notice it on the outside sill of our kitchen window. Responding to her summons I looked out and there it was, right on the sill where the light from the kitchen illuminated it somewhat.

The answer to the question of “How’d it get here?” is fairly simple. Scaling the concrete foundation, and siding and making its way around the sill’s overhang is fairly easy for a creature with suction cups on each of its toes. Why was it there? The kitchen light we leave on in the evening attracts the moths and other insects on which it feeds.

I went outside and easily caught our visitor – the first gray tree frog we’ve seen here after 44 years. Since I wanted some photos of the visitor, the frog was placed in a glass container we’ve used a terrarium over the years where it would spend the night. It quickly demonstrated its climbing ability by climbing part way up the glass side of the container.

In the morning as soon as it was light enough for photos we went outside, camera in my hand.

Gray tree frogs live up to the species portion of their scientific name, versicolor, since they can change their coloration to blend into the background. In the morning, the frog appeared a somewhat Kermit-like green – 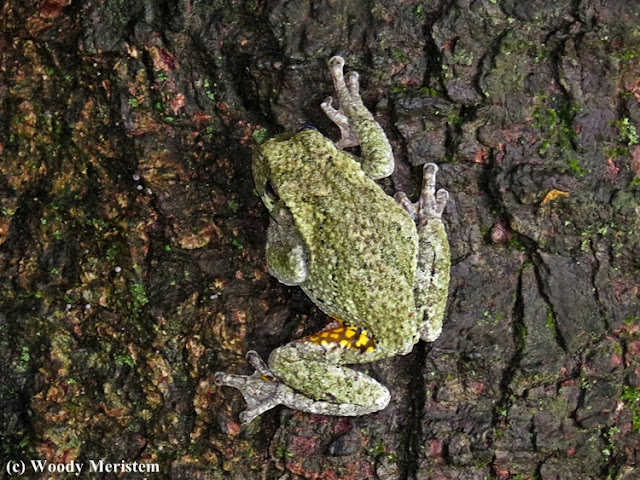 A little while later, after resting on the grayish bark of a red maple, the frog gradually assumed a blotchy grayish color – 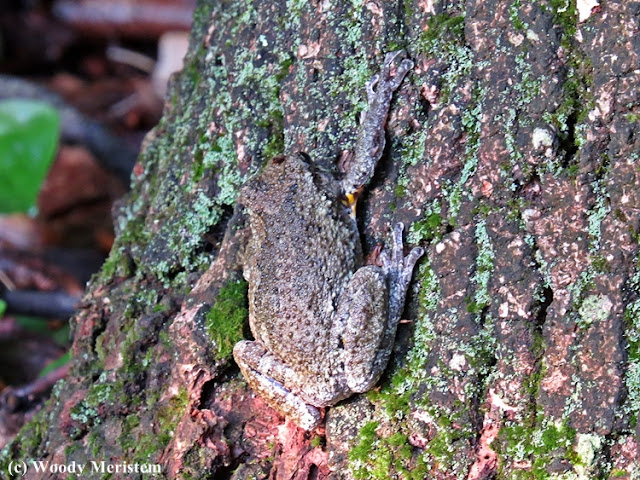 With its lumpy-bumpy skin and varied color the gray tree frog is almost perfectly camouflaged against tree bark. 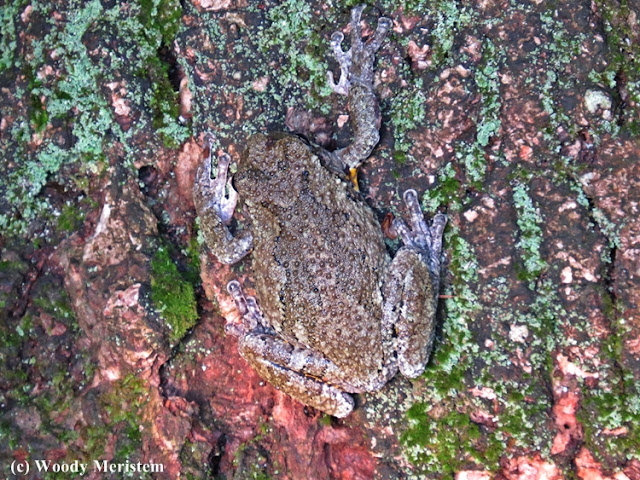 Gray tree frogs, except during winter and the short time when they descend to breed in standing water, spend their time high in the tops of trees. There, they quietly pass the day on a branch and spend the night feeding on insects – especially moths. Their camouflage protects them from predators, but if a predator threatens the bright yellow coloration of their inner legs distracts the threat as they leap to safety. 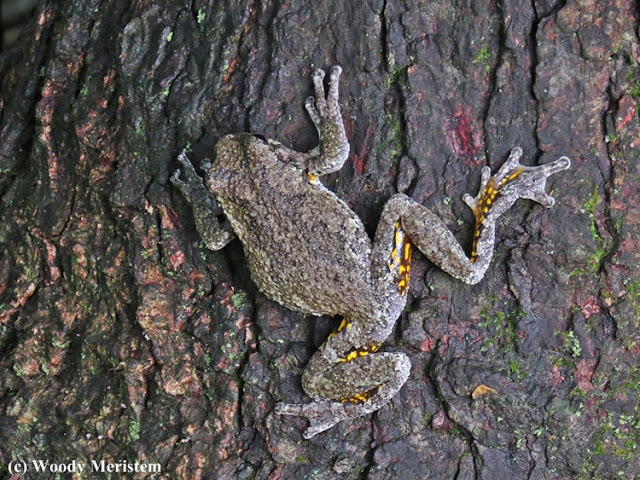 Although gray tree frogs are reputed to make good pets, our visitor was released to resume its life in the treetops.

Posted by Woody Meristem at 5:14 AM 3 comments:

Spring at the Brush Pile


Things were quiet at the brush pile during late March, April and May. As the camera trap completed its year of watching and capturing the comings and goings of the wildlife that utilizes the brush pile behind the house, activity has seemed to drop off. Earlier accounts of the brush pile were posted here, here and here.


One of the cottontail rabbits that we see frequently seems to have taken up permanent residence beneath the pile and the camera captured so many photos of the rabbit that I deleted almost all of them. 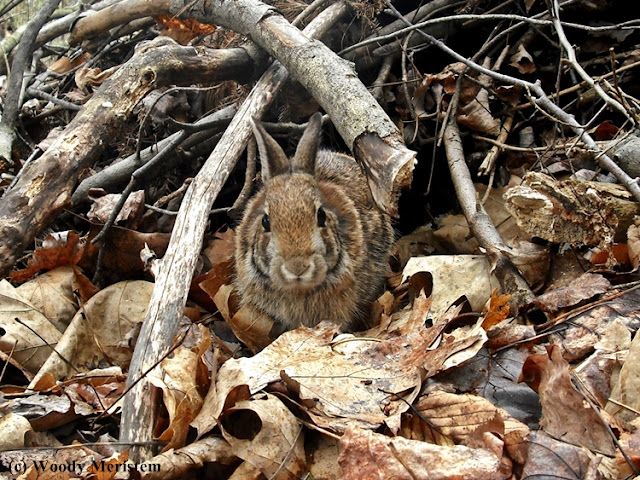 Although nothing unusual made an appearance, the usual cast of characters did appear – although less frequently than they have in the past. Second to the rabbit in the number of photos were the gray squirrels that climb around on the brush pile and occasionally disappear in to the rabbit’s shelter under the pile. 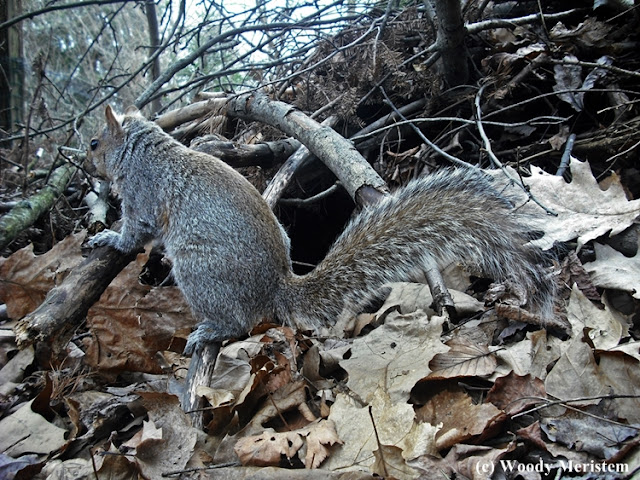 
So, we’ll say Good-bye to the brush pile and the cottontail after a year of spying on them. 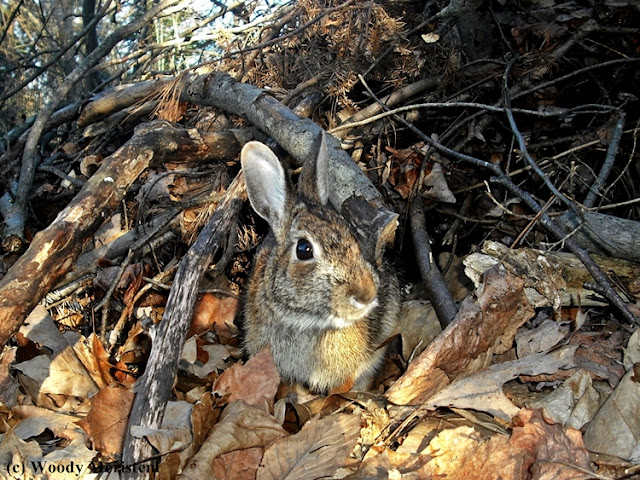 Perhaps I’ll put the camera back at some point in the future and resume checking on activity at the brush pile.
Posted by Woody Meristem at 7:54 AM 3 comments:


Thirty-nine years ago a group of us that I’ve long called “The Naturalists” went botanizing below Rocky Ridge where plants that are rare or non-existent in the area where we live grew in some abundance.

In the late 1990s our son-in-law and I returned to Rocky Ridge to hike in the area where he’d spent time deer hunting the previous fall. It was one of the last times we hiked together before his heart failed him at a much too young age.

Recently, I decided to go back to Rocky Ridge to find and photograph some of the plants we’d seen those many years ago. I couldn’t find the obscure orchid called puttyroot which blooms in the spring, but whose single leaf only emerges in late summer, then withers and dies during the winter.

But I did locate some showy orchis, a beautiful small orchid – 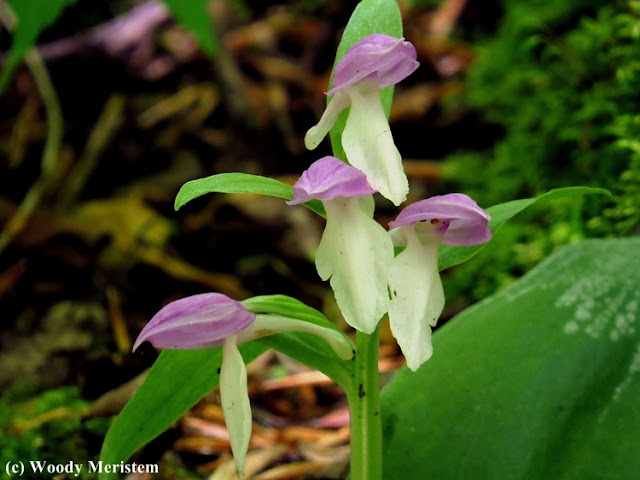 A second highlight of the trip was the hike to the ridgetop which is occupied by the sandstone outcrops from which the ridge’s name is derived. 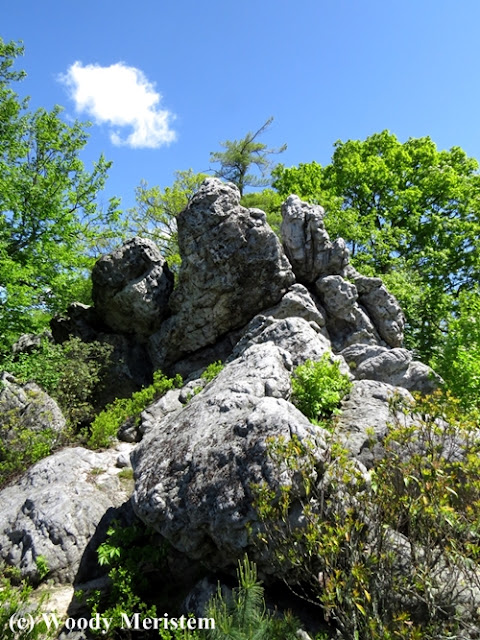 A trail winds over and between the outcrops – 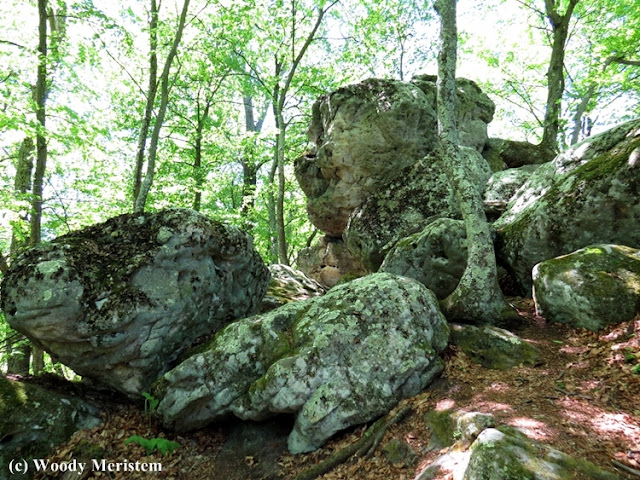 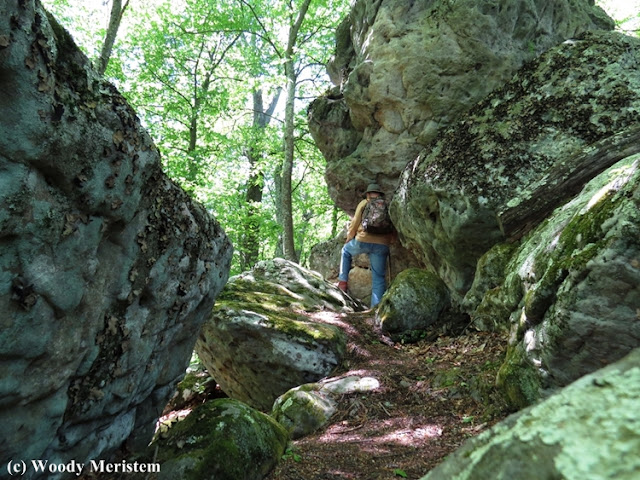 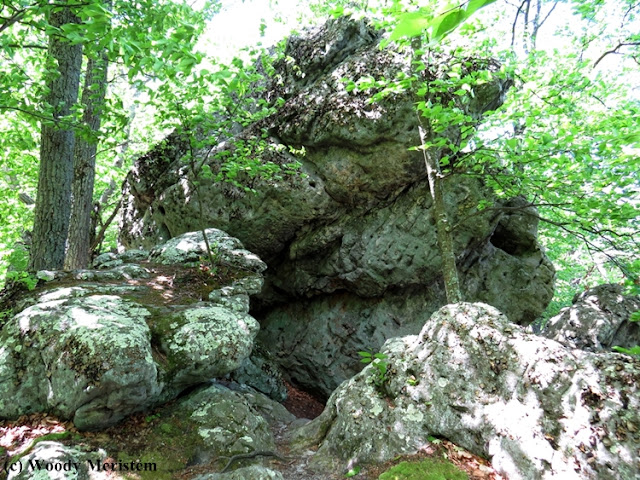 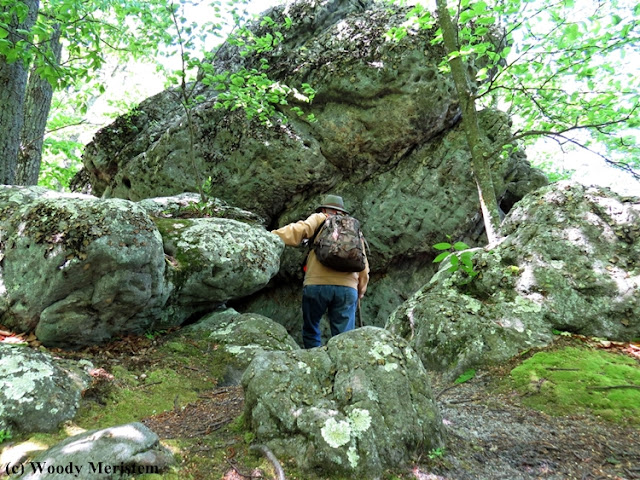 At several spots clambering atop some of the rocks affords views over Stone Valley and some of the many long ridges of Pennsylvania’s Ridge and Valley region. 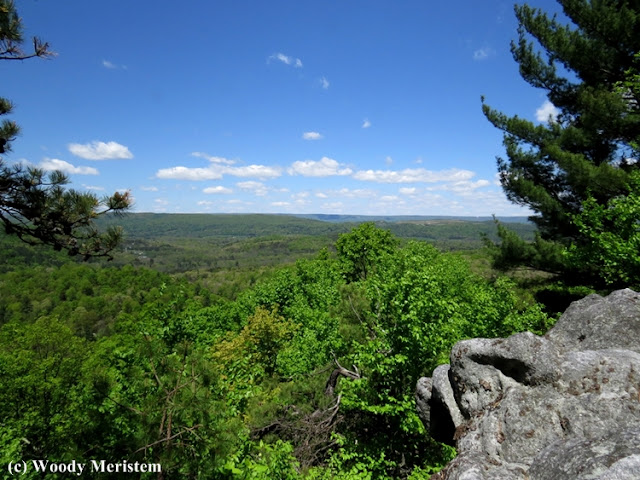 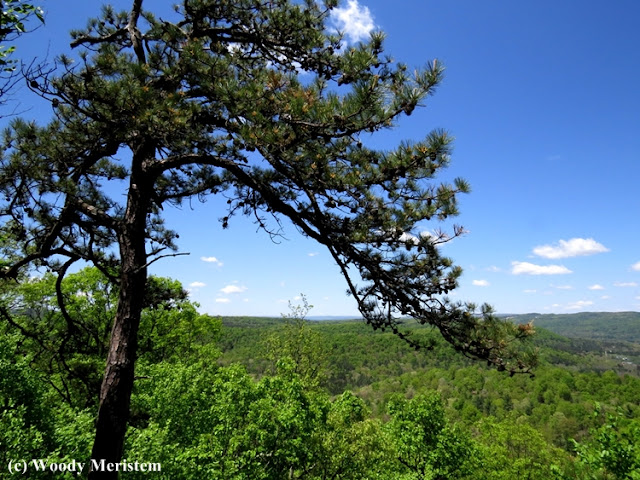 It wasn’t just the rocks and the views that made this hike enjoyable; it was also the many flowers, among them, the pinkster azalea – 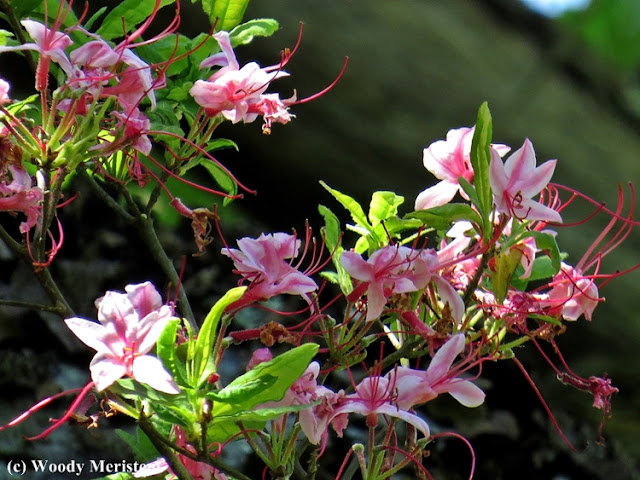 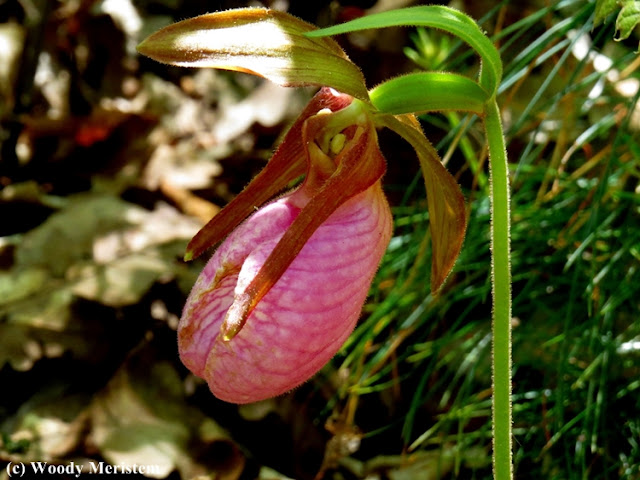 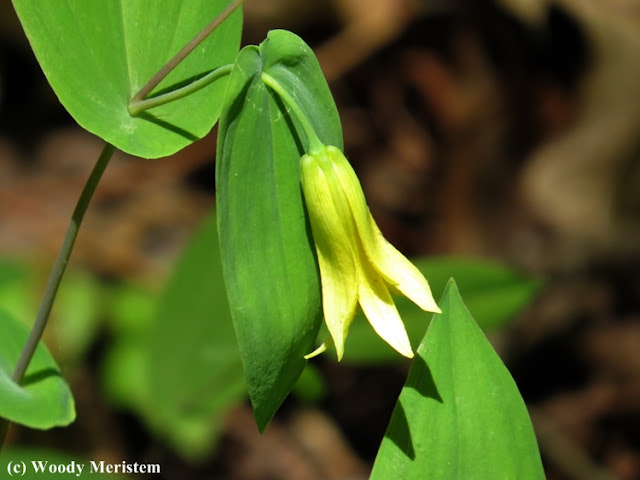 Rocky Ridge is a special area in so many ways; I should visit it more often.

Posted by Woody Meristem at 4:52 AM 4 comments: