Beneath the Ledge II


For most of a year I’ve had a camera trap beneath an overhanging rock ledge. Some of the first photos were posted here.

Several checks of the camera trap since that post yielded more photos: an eastern chipmunk – 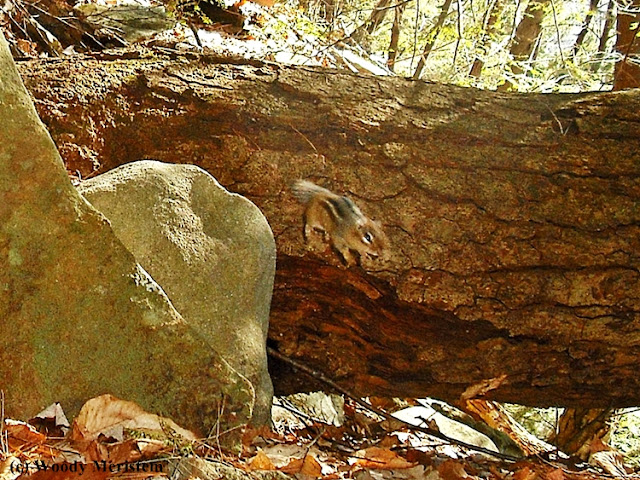 A porcupine that apparently dens in the labyrinth of overhangs, fallen slabs and crevasses of a nearby rock outcropping and from time to time appeared on camera – 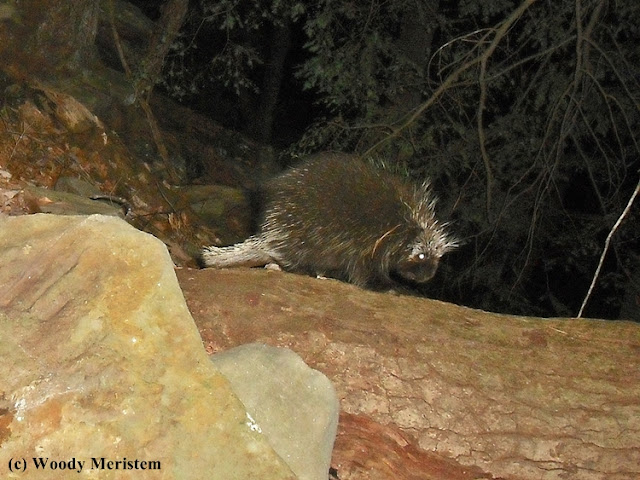 As before, white-footed mice were frequently in the photographs, often climbing on the ledge – 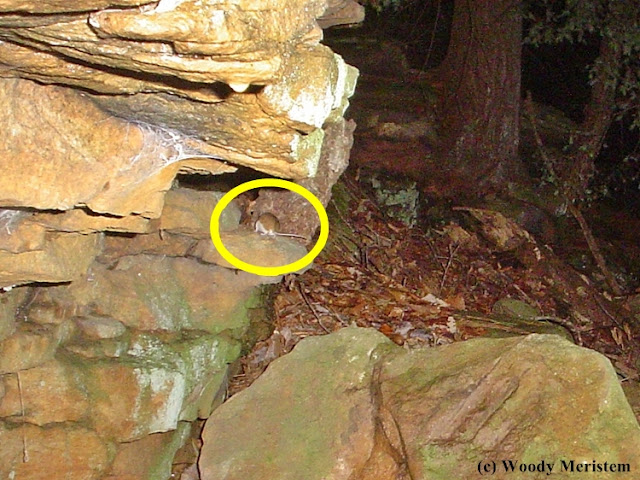 When it rains, water drips from the overhang creating a wet spot on the upright slab. It was there that a white-footed mouse assumed a spread-eagle posture to drink from the wet spot – 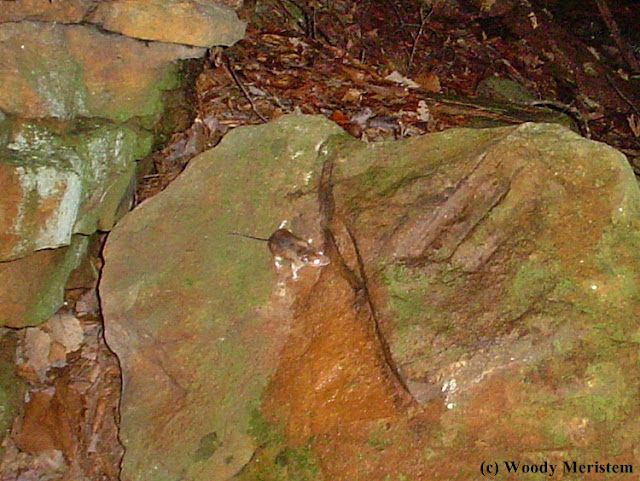 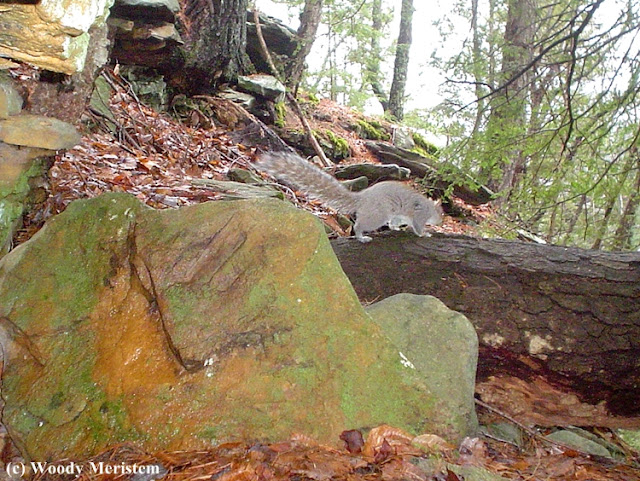 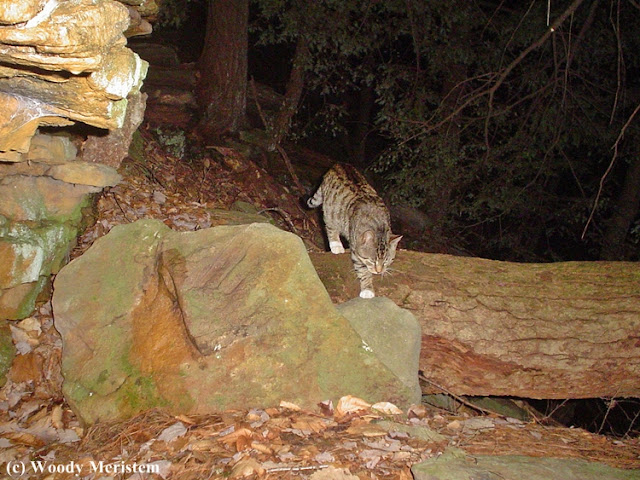 The house cat was fortunate to get that far from civilization without becoming a meal for a coyote or great horned owl. But it would be better for native wildlife, especially birds and small mammals, if the house cat had provided a meal for a predator.

The camera trap captured its second photo of a gray fox – 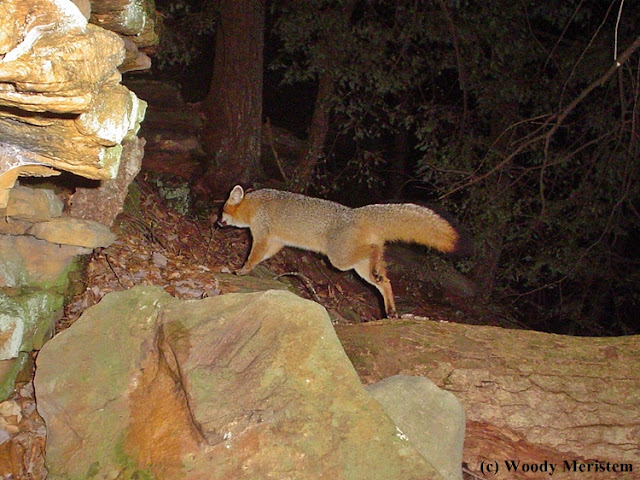 On September 1, for the first time, the camera caught a black bear beneath the ledge – 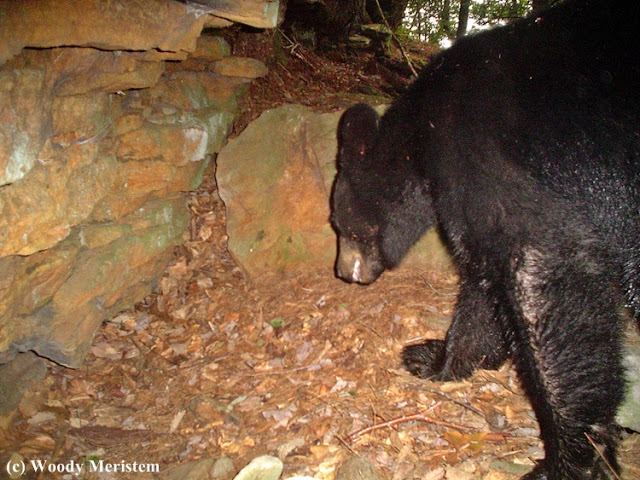 The bear became a regular visitor, appearing on camera again on September 29, October 12 and October 21 – 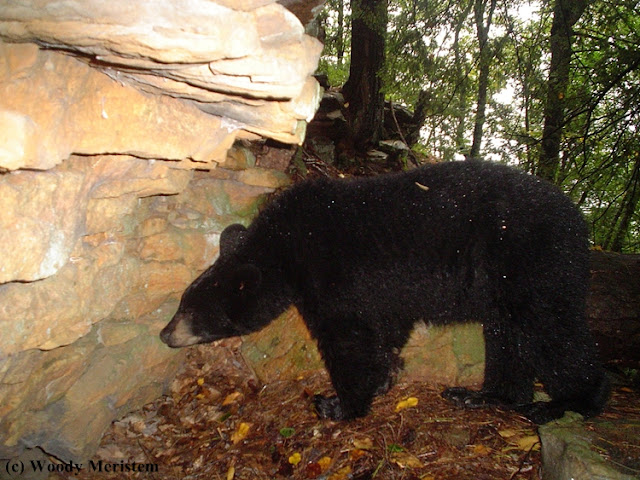 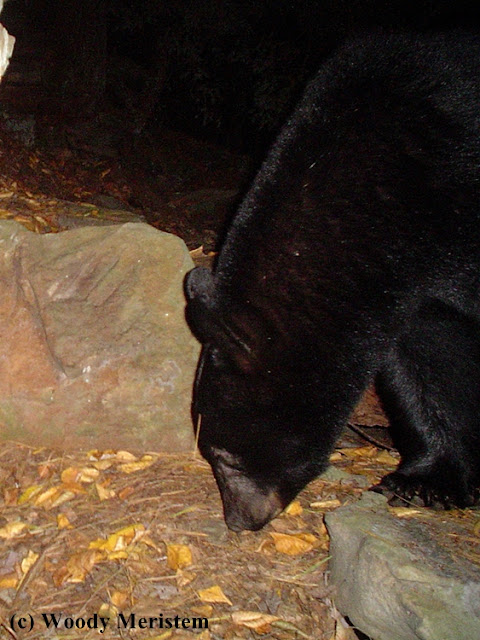 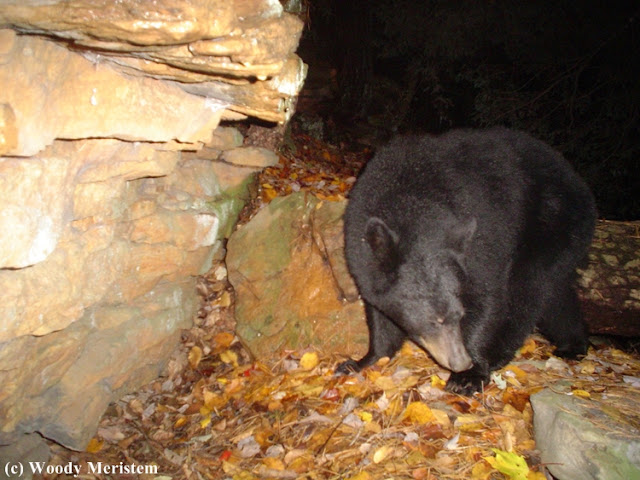 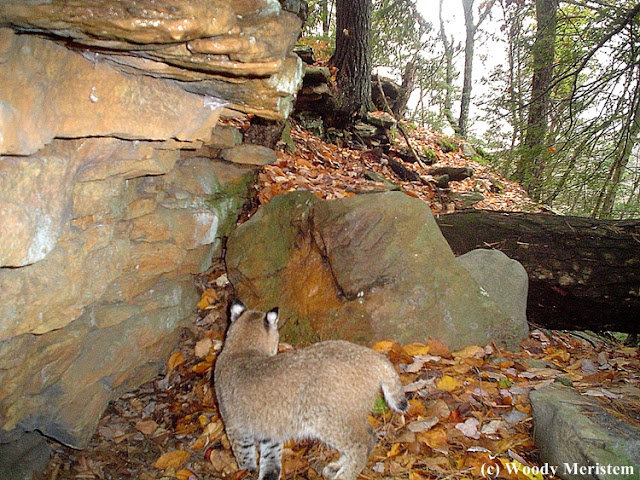 The most fascinating photos were the large number of photos (20+) of a camel cricket taken on several different days. The camera’s passive infra-red (PIR) sensor  reacts to changes in temperature to turn on the camera and trigger photographs. How sensitive the PIR must be to react to an invertebrate whose body temperature is close to, or the same as, that of its surroundings, but the PIR did – 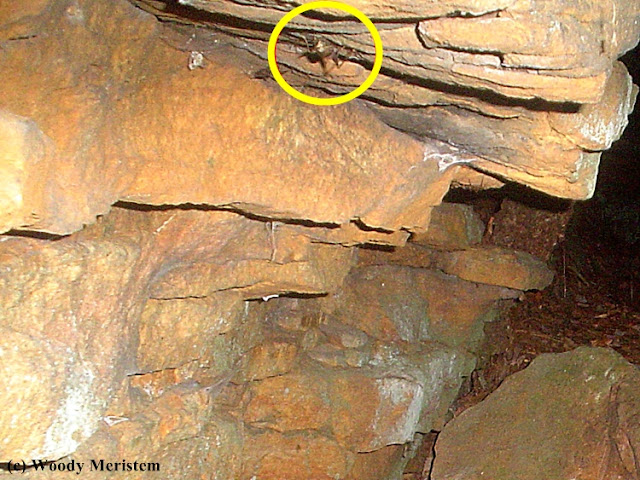 Although the camera trap doesn’t get a lot of photos, the variety of wildlife at this spot warrants keeping it in place.
Posted by Woody Meristem at 3:34 AM 6 comments:


It's the third week of November and, while there have been several heavy frosts at the house and the last few mornings have felt like mid-November should, this has been a really warm fall. In open areas near the river there are still a few flowers in bloom. In past years the last of the wildflowers would have been done blooming in October – but the climate is changing and recent years have been the warmest on record.

Some of the blooming wildflowers are exotics, escaped ornamentals or accidental imports, others are native species and some are in flower long after their normal season for blooming. All of these plants are well adapted to grow along roadsides or field edges where the sun shines brightly. A walk yielded a photographic bouquet of the last of the year’s wildflowers –


It wasn’t just flowers that spoke of the warmth, there were a few insects flying in this too warm weather. A common sulphur on small white aster – 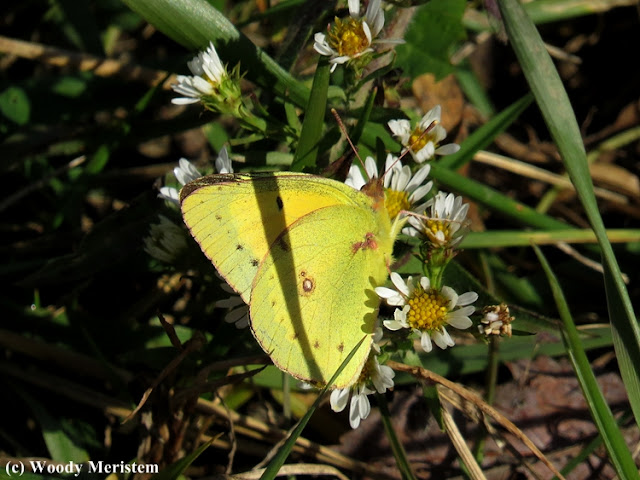 And a mating pair of ruby meadowhawks – 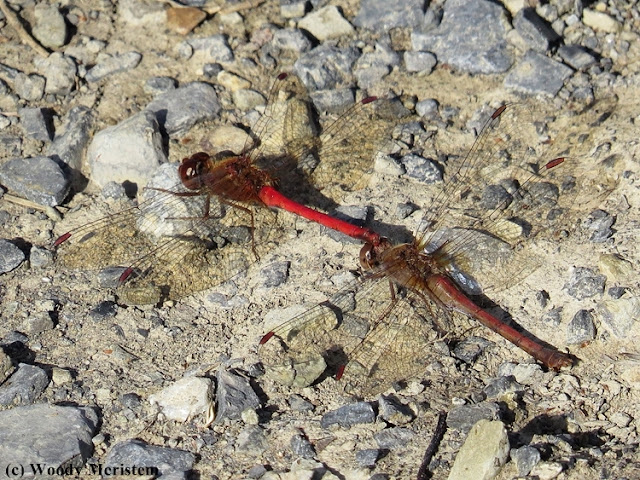 Even though the temperature shouldn’t be well over 55°F in November as it was this year, it’s pleasant to see these flowers and insects.
Posted by Woody Meristem at 3:00 AM 6 comments:


It was there in the photo from the camera at my favorite camera trap location in the Big Woods – something white. Out in the woods on the camera’s tiny screen there was no way to tell what it was, even after zooming in to the camera’s limit.

At home, on the computer, the image was clearer but the first thing that came to mind, since gray squirrels are common in the area, was a white or albino squirrel. A closer look quickly revealed that this was no squirrel – 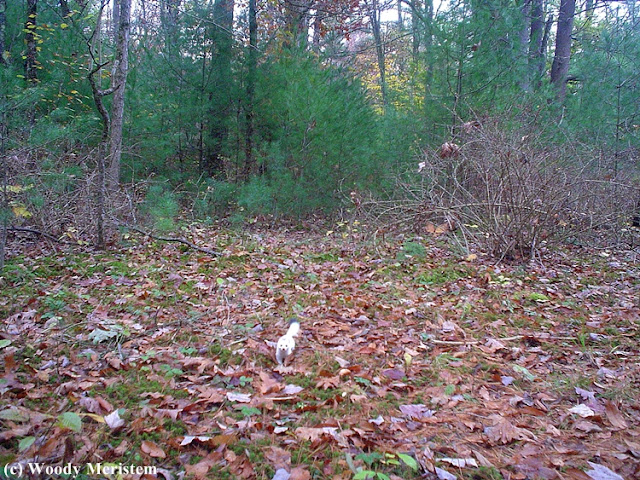 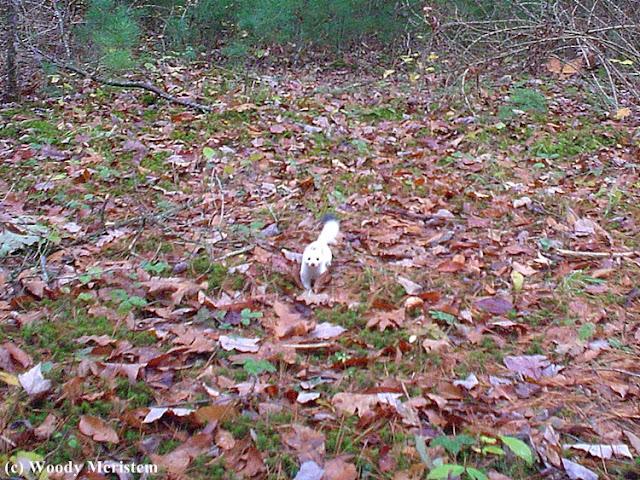 This was no squirrel – it was a weasel in its white winter coat. There are three species of weasels in Pennsylvania: the least weasel which is both very small and very rare; the short-tailed weasel or ermine which is larger; and the long-tailed weasel, the largest of the weasels. Virtually all short-tailed weasels become white in winter, while only about 20 percent of long-tailed weasels in Pennsylvania don a white winter coat. From the angle of this photo, which was the only photo of the weasel, there’s no way to tell which species it was.

The photo was taken on October 30th, long before we can expect to have snow consistently covering the ground – actually, in recent years the warming climate has made any snow in October extremely uncommon.

This weasel will have to be really quick or really lucky to escape the hunting fox, hawk, owl, or coyote that could so easily see a meal in the form of a snow-white weasel on dry brown leaves.
Posted by Woody Meristem at 5:12 AM 6 comments:

One Night - Two Bucks and a Fox


The camera traps on the hill above the house have gotten photos of several white-tail bucks in late summer and fall, some were young (18 months old), and their antlers are mere spikes this year – 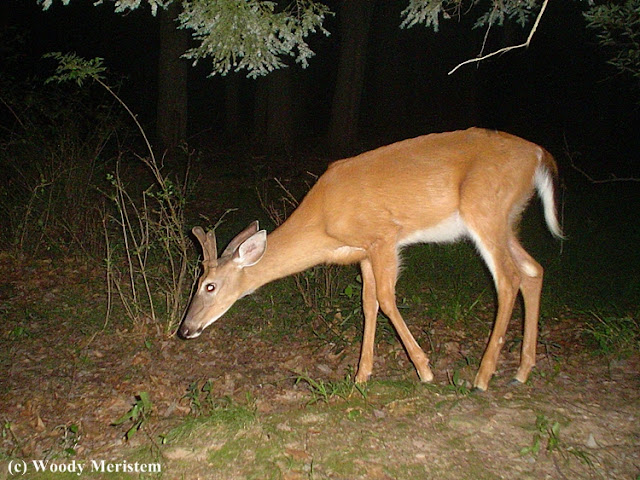 Other were more impressive older bucks– 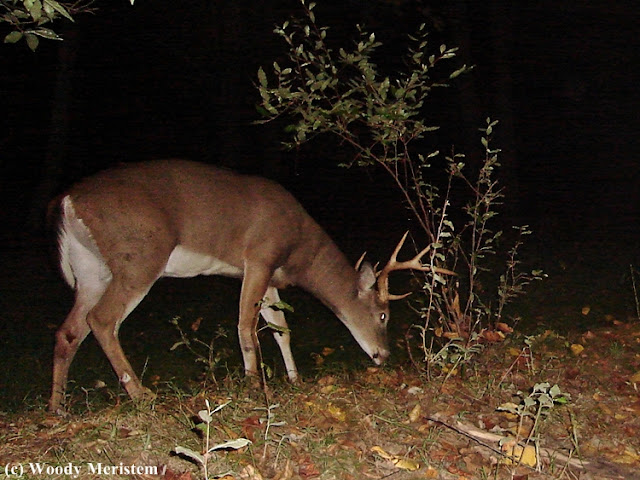 The bucks’ antlers are now free of the “velvet” that covers them as they’re growing. The bucks rub their antlers on small trees and shrubs to remove the velvet and strengthen their neck muscles for breeding season battles. Thus are “buck rubs” created, those signs that everyone who spends much time outdoors has seen – 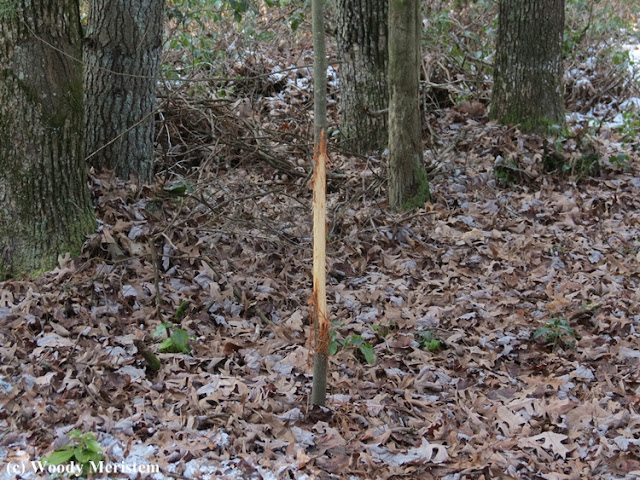 Before the breeding season begins, the bucks create scrapes where they leave scent to advertise their status. Scrapes are less familiar to most people than the rubs, but more important to deer. They create the scrapes by pawing away the leaves, then urinating on the bare ground and often their rear legs; at the same time they rub their forehead glands and preorbital glands on a low overhead branch. 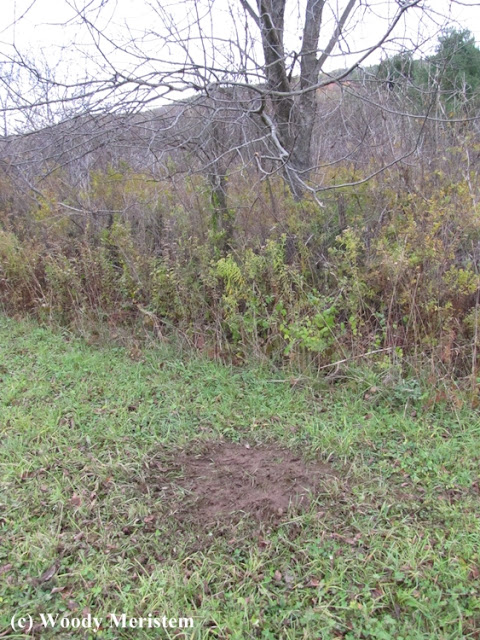 Now it's November and the rut is in full swing; the bucks are searching for does and competing to father next spring’s fawns.
Posted by Woody Meristem at 2:25 AM 5 comments: