A Gathering of Chickadees

It was an absolutely beautiful winter morning, clear and cool with a beautiful blue sky, as I walked on a road through a very heavily logged woodland. All along the road were patches of staghorn sumac bearing their clusters of red fruit – 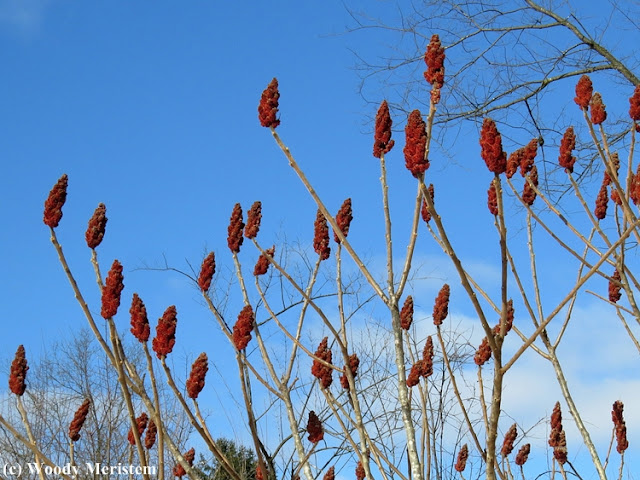 Staghorn sumac typically grows in open areas, often along roadsides and reproduces by seed, usually scattered by birds, and root sprouts. The root sprouts often form dense colonies, all genetically identical since they originated from the same initial plant.


One of the colonies of sumac sprouts hosted a small flock of black-capped chickadees. The acrobatic birds were busy investigating the sumac seed heads – 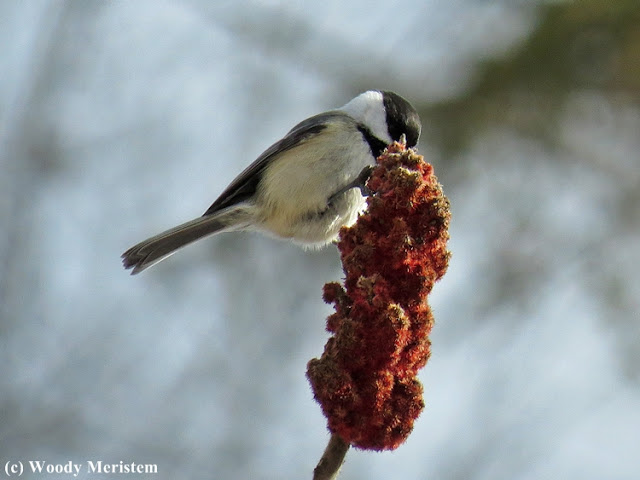 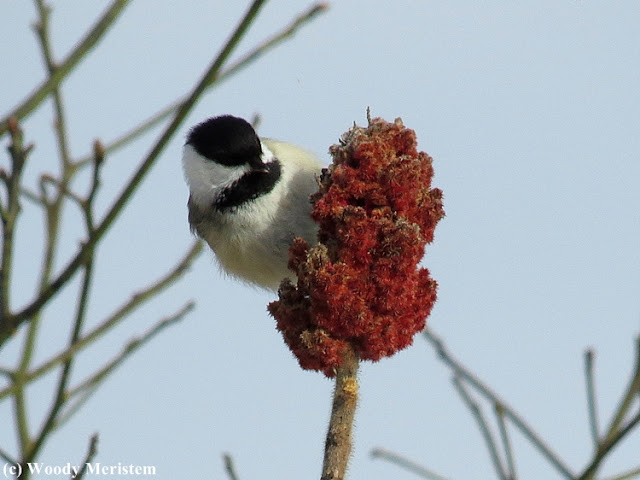 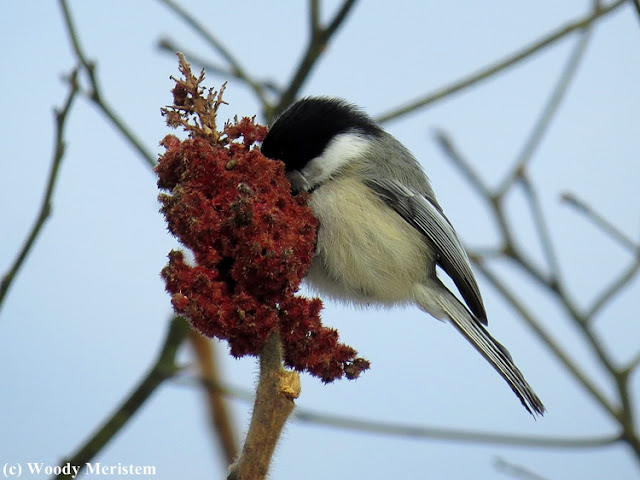 When they found a seed that met their standards they would pluck it from the cluster, carry it to a nearby stem and, as they do with seeds at feeders, proceed to hammer it open – 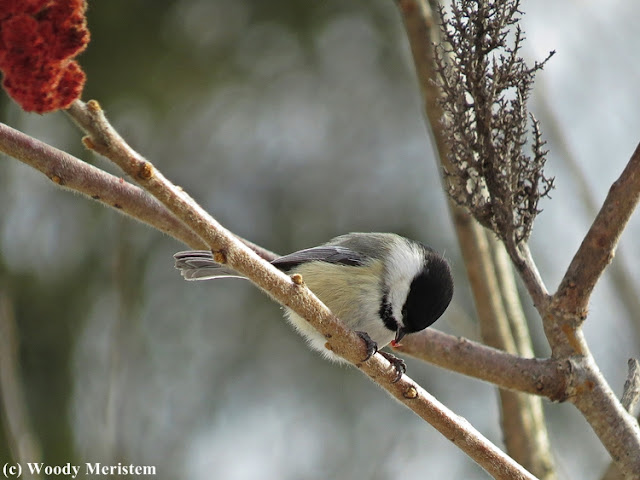 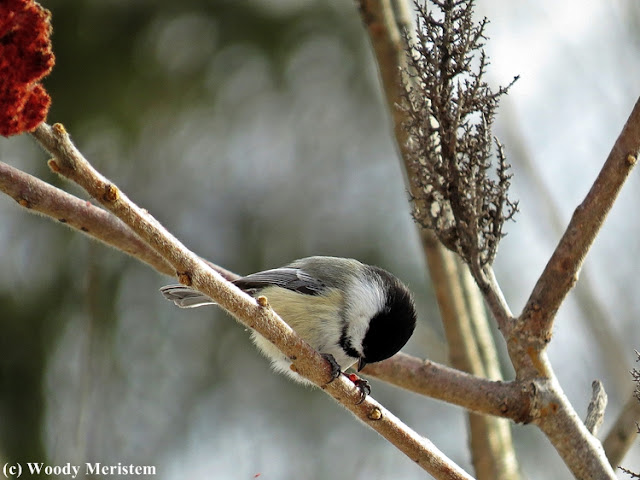 Interestingly, several weeks before I’d seen a flock of chickadees doing exactly the same thing on exactly the same colony of sumac. Were these the same birds? Within 100 yards along the edge of the road were several dozen colonies of sumac. But while some of the seed heads on this colony were picked clean of seed – 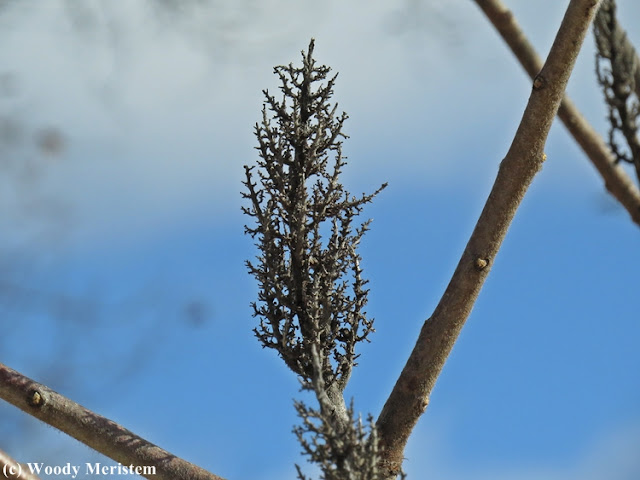 The seed heads on other colonies appeared to be totally intact – 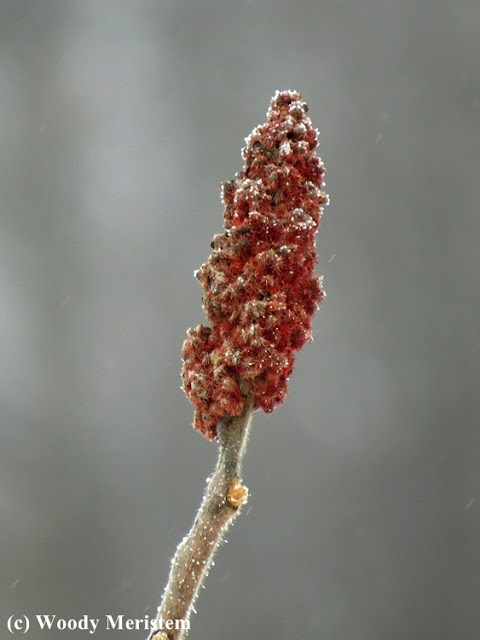 Here's an opportunity for some research, why do black-capped chickadees seem to prefer one sumac colony instead of others – oil content of the seeds, other nutrient content, color, flavor, mere repetition, will they feed on the seed heads of other sumac colonies after these are exhausted?

Throughout the winter staghorn sumac feeds not only chickadees; but also our resident woodpeckers: downy, hairy, red-bellied and pileated which feed on the seeds as do bluebirds, ruffed grouse, cardinals and at least two dozen other species.

Ol' Red and A Touch of Grey

The titles of Blake Shelton’s country-western song and the Grateful Dead’s classic rock were the inspiration for the title of this post, but music isn’t the subject. Instead, northcentral Pennsylvania’s two species of foxes are the subject.


Ol’ Red is the red fox, a species that most frequently inhabits field edges and fencerows where it feeds on small mammals, fruit, berries and insects it's actually an omnivore that will eat almost anything edible. Prior to European settlement the red fox didn't inhabit eastern North America but apparently expanded its range southward and eastward as forests were cleared for agriculture. Red fox are also found in Eurasia and have been introduced elsewhere. 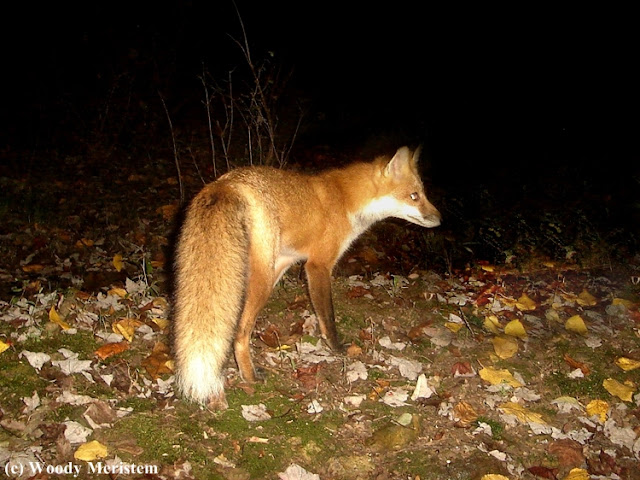 Our Touch of Grey is the gray fox which is truly native to eastern North America where it inhabits woodland. Like the red fox, gray fox are omnivores feeding on small mammals, birds, fruit and almost anything else that’s available and fit to be eaten. The gray fox is a cat-like canine that readily climbs trees, aided by its partially retractable claws. 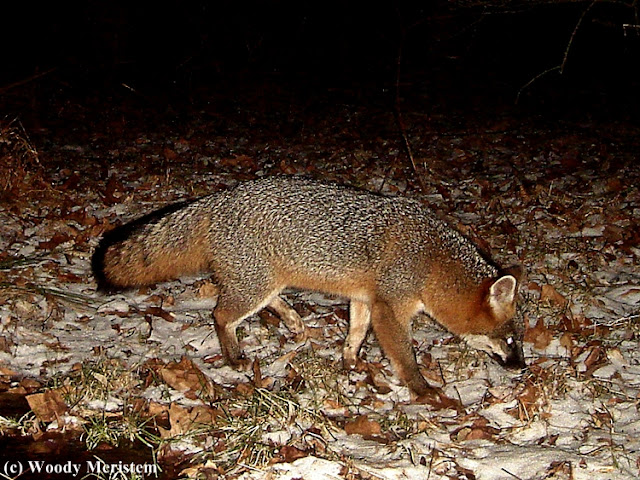 For a number of years the camera traps on the hill above the house have captured photographs of gray fox; last year red fox began appearing on camera, some of the photos and videos were in this post.


Since then the cameras have continued to capture more videos: of Ol’ Red eating fallen apples last fall –

And videos of a pair of grays, then a single gray fox scent marking and later getting a meal –

Hopefully our foxy neighbors or their descendants will be around for a long time – if only they could sing.
Posted by Woody Meristem at 10:21 AM 6 comments: