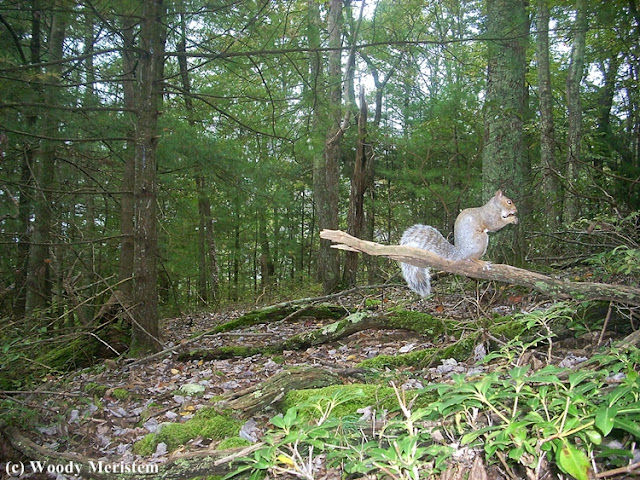 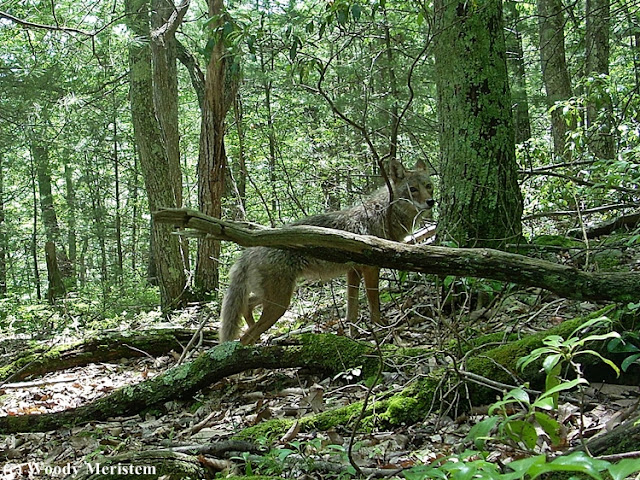 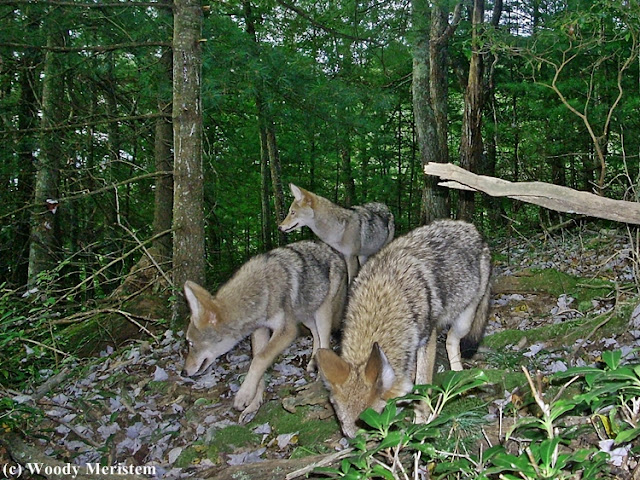 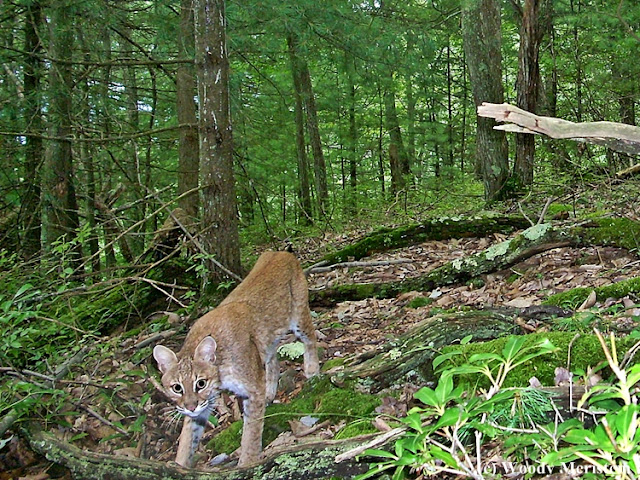 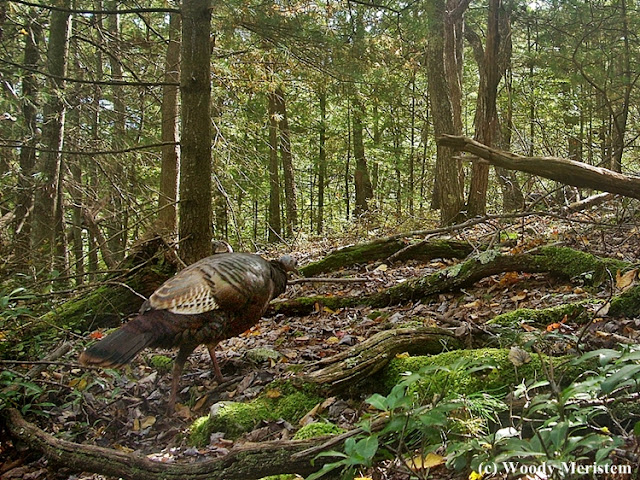 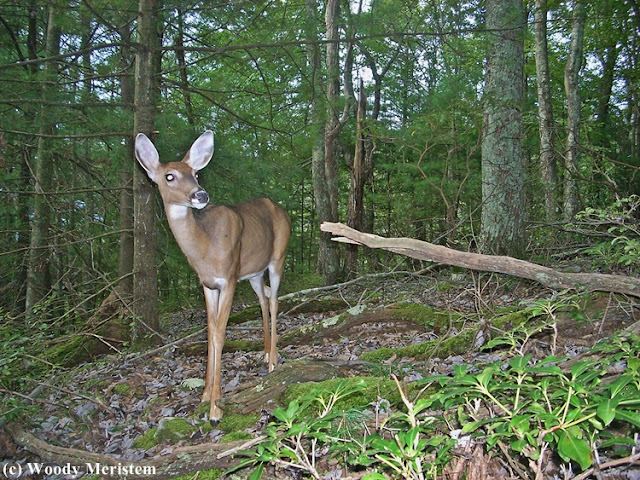 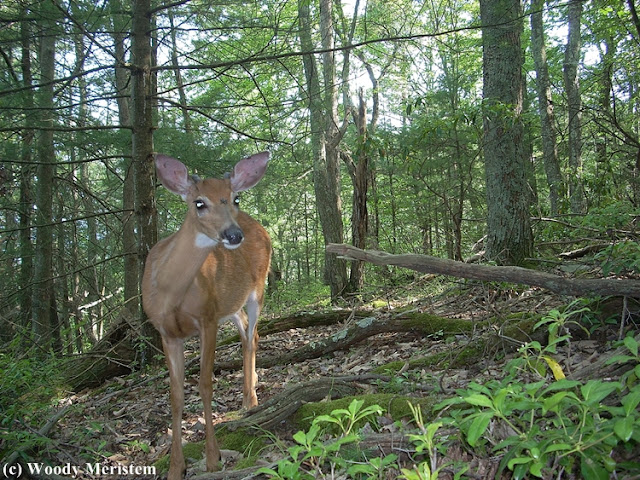 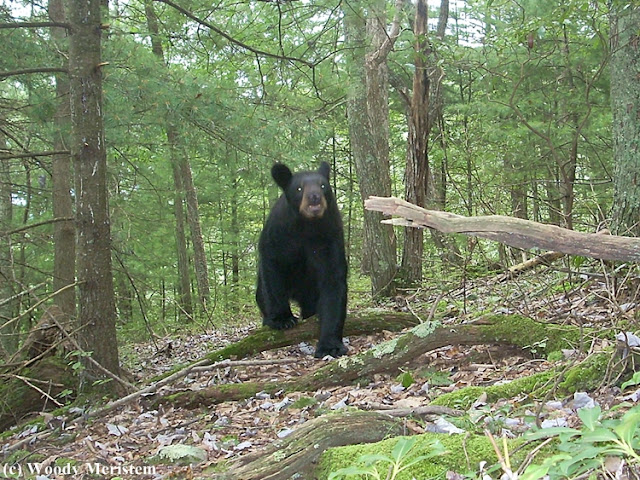 Thus it went through late summer and into the fall.
Posted by Woody Meristem at 3:23 AM 6 comments:

The Bridge that Spans the Flood

It was in the early fall when I stopped in a wide spot along the state forest road and saw an unmarked footpath leading toward the nearby stream. Being a curious sort I followed the trail to see where, if anywhere, it might lead. 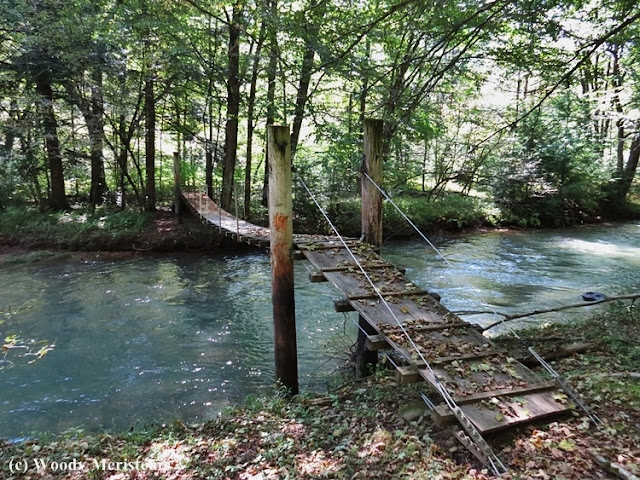 Once upon a time, at a much younger age, I was part of a crew that built a similar but longer bridge on a hiking trail. So, the construction of this particular bridge was of interest. At each end of the bridge “deadmen” had been buried in the ground to anchor the cables – 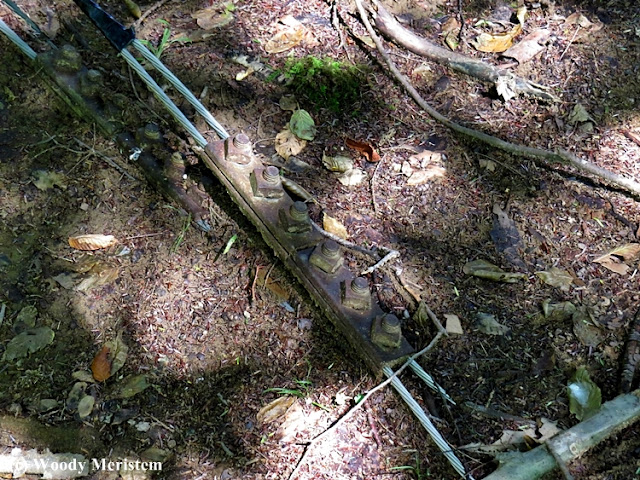 The cables themselves appear to be aluminum, of the kind used for electric transmission cables. Obviously they’d been in place for quite a while but looked as good as the day they were made – 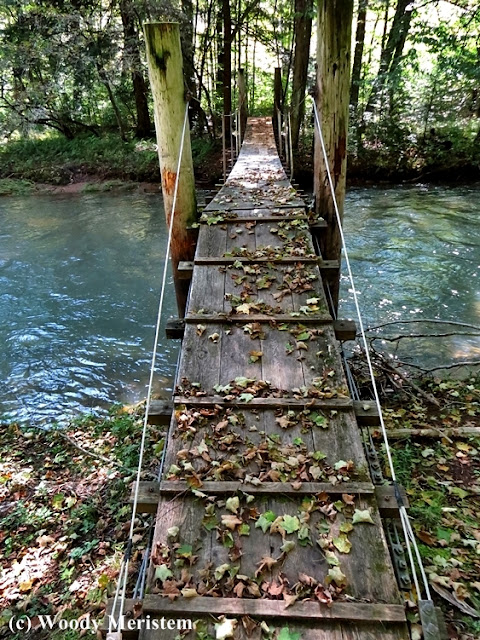 Two upper cables serve as handrails while a pair of lower cables support the walkway, the upper and lower cables were connected by lengths of conduit – 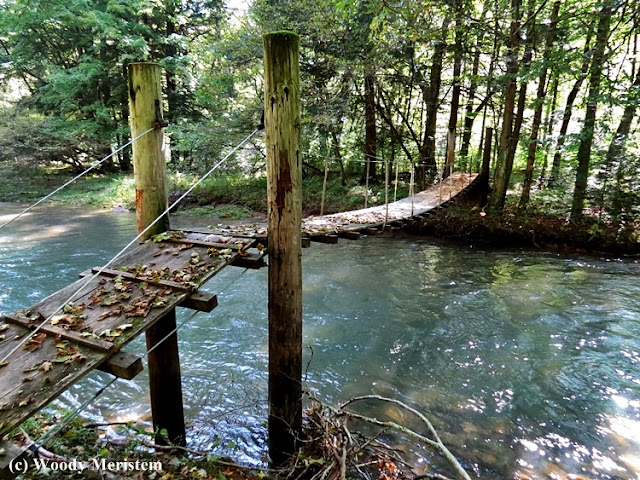 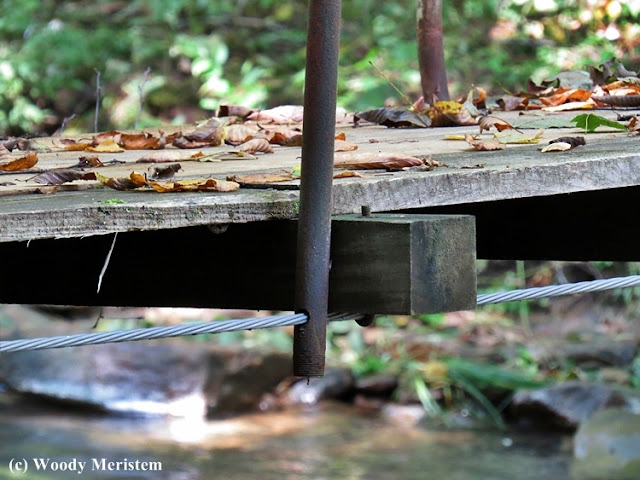 That support the wooden deck – 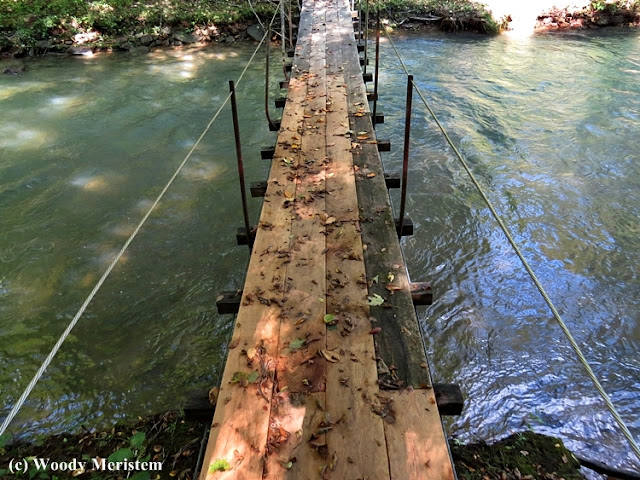 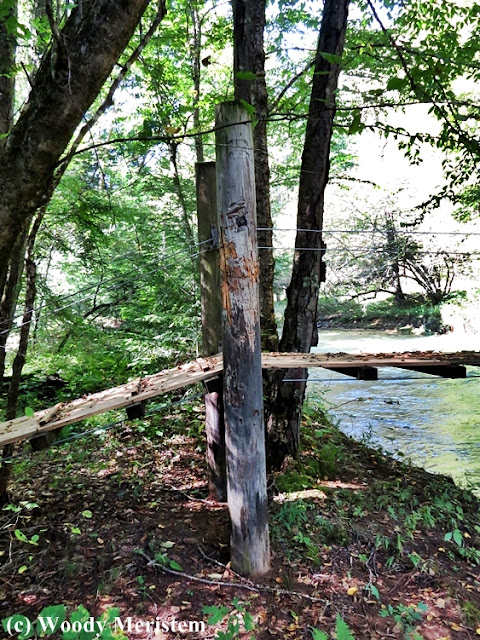 Bears, being bears, have bitten and clawed each of the utility poles – 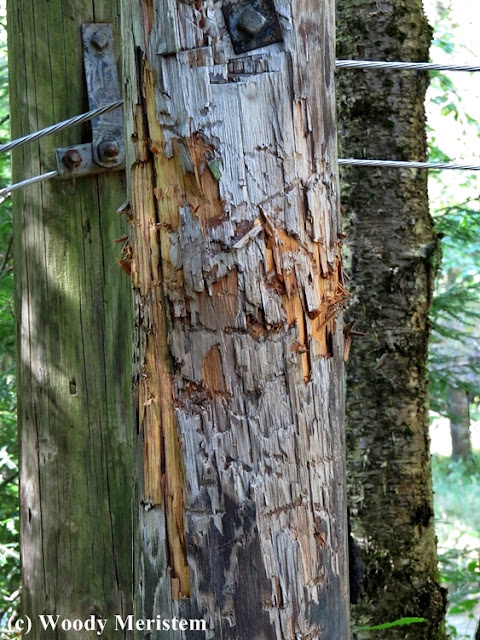 The bridge was clearly built with care and skill – my complements to the builders.


Nobody would take the time and effort to build a bridge like this for no reason. Crossing the bridge and continuing on the footpath brought the reason into view – a cabin in the woods, in the old style: small, made from round logs, chinked with cement, with peeled poles for roof rafters and moss on the roof –

There are a number of similar cabins scattered in the forests of northcentral Pennsylvania, at least one of which had been built for a logging camp in the 1880s. Unfortunately, most “log cabins” now being built resemble those being featured on TV rather than the one across the bridge.
Posted by Woody Meristem at 5:02 AM No comments:

Last year I set a camera trap along a wildlife trail below the rim of the Allegheny Plateau. The rolling top of the plateau is at an elevation of 1,500 feet which drops, gradually at first, then precipitously to a large stream 900 feet below.


Most people have a mental image of a plateau like those in the old western movies – a treeless expanse of rock with "cowboys and Indians”. The Allegheny Plateau isn’t like that; for the most part it’s forested with a mix of hardwood trees and has only a few small scattered open cliffs; some areas were cleared for farms in the 1800s, but for the most part those farms were abandoned in the early 1900s.


The camera trap was on a steep sidehill a mere 75 feet below the rim of the plateau along a trail that led from an area of jumbled boulders to a small outcropping of bedrock containing a few tiny “caves” both of which could provide shelter for medium-sized predators and their prey.


The first photographs yielded by the camera along the trail were posted here last February. This spot is quite productive in its yield of photographs: gray squirrels, raccoons, wild turkey, black bear, deer, bobcats and others – 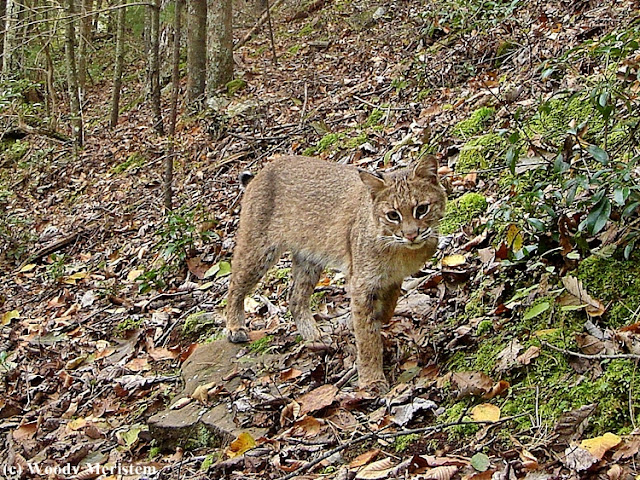 That photograph looked very familiar, prompting the thought, “Dummy you forgot to delete some of the old photos from the memory card.” But then I looked at the metadata in the photo’s file and realized it had only been taken a few days before. What the ??? In the file of photographs from the site was the older image, which is also the earlier one in this post, so I compared the two photographs. Here they are, a photograph of a bobcat taken on July 31 and the new one taken on October 22 – in the same spot and virtually the same pose –

A closer examination of the images reveals that it was actually the same bobcat – take a look at the spots on the two right legs, especially those on the upper part of the front leg. The conclusion is inescapable, it’s the same animal in the same spot, with its rear foot on the same rock – how cool is that?
Posted by Woody Meristem at 4:38 AM 7 comments: