It was about 9:30 at night, H and I were listening to a discussion of the COVID-19 (coronavirus) that’s sweeping across the globe and is impacting our society in ways we are only beginning to understand – and may affect the two of us profoundly since, at our ages, we’re both in a high risk group.


From the kitchen we heard a combination ping and thud that we’ve occasionally heard in past springs. “Bear!” we both thought, since that’s the sound produced when a bear pulls down the feeder, suspended on a wire, outside the kitchen window. We went to the window, and there in the light of the outside floodlight, was a moderately large male black bear licking up the sunflower seeds that had been in the feeder – 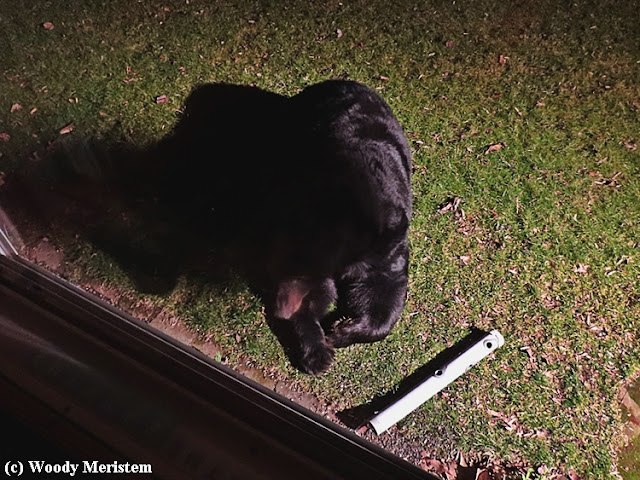 He must have heard us talking or perhaps had seen us peering out the window, for he rose and gradually walked uphill into the dark of the night.


The next morning, on the side of the house there was a smeared muddy footprint left by our visitor – 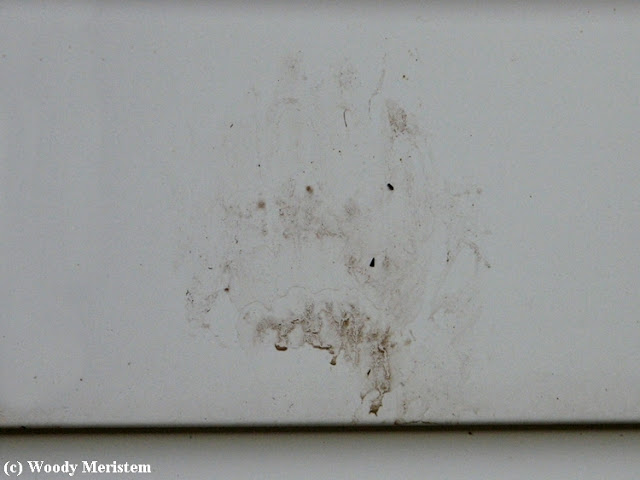 So much for leaving the feeder out at night, the feeder will be spending the night in the garage while the bear spends its evenings searching elsewhere for a meal.


In this time of COVID-19 (coronavirus) I've been fortunate to be able to get out in forest and field where there is seldom another person to be seen and it’s easy to self-isolate. Unfortunately, this crisis will almost certainly continue for quite some time and probably get even worse; I’ll try to keep getting outside and bringing you accounts and photographs of the great outdoors.

All the best to you and yours, wherever you may be – stay healthy.

A Quiet Walk in the Woods

Spring has sprung! Warm and sunny it was, so H and I decided to take a bicycle ride on the rail-trail. Since it was our first ride of the year we didn’t go as far as usual before turning around and heading back. We were about two miles from the car and stopped to look at a bird; we had just started up again when a combination of inattention and carelessness caused me to tip over and crash to the ground. The end result was a cracked helmet, a minor concussion, and possibly a broken rib or two.


If you ride a bicycle wear a helmet!


So, for several days I didn’t venture far from the house; cabin fever soon set in and the forest called. A short, slow walk was in order, so to the woods I went. There’s always something interesting to see in the woods, even on a short walk of only a bit more than two miles:


The scat of an eastern coyote – 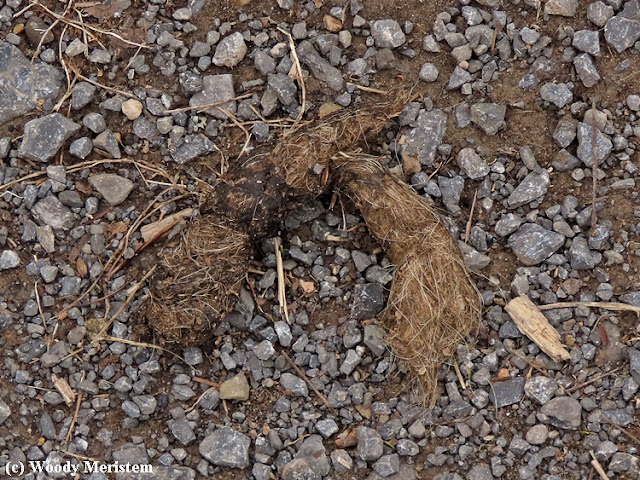 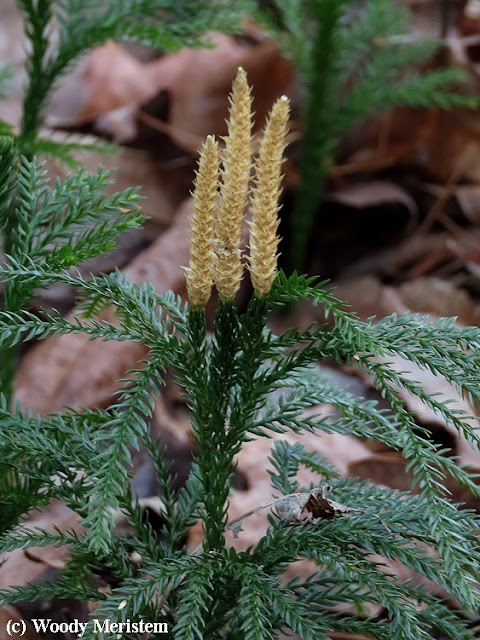 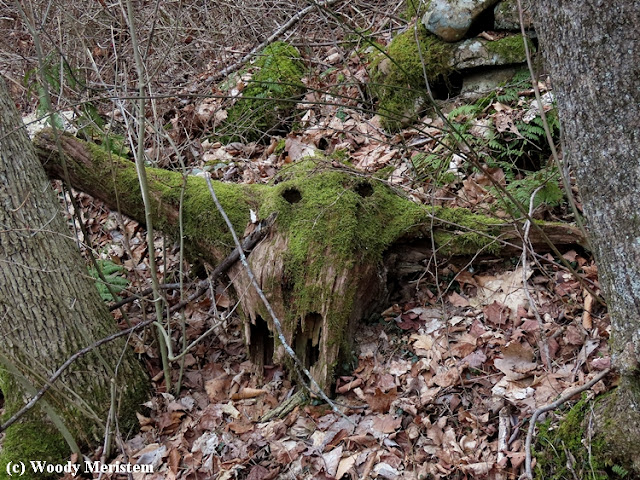 A variety of lichens – 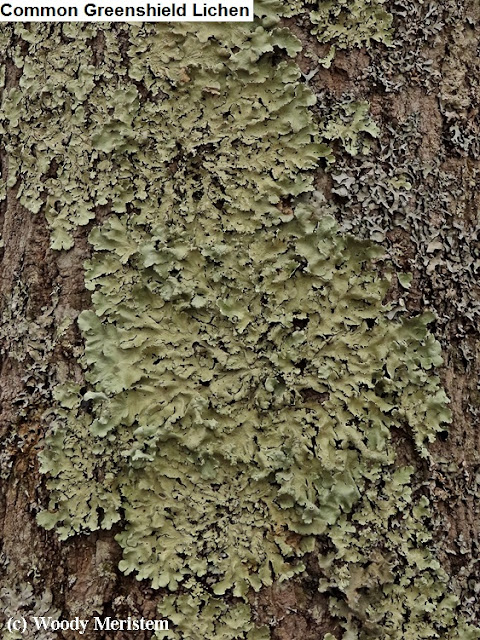 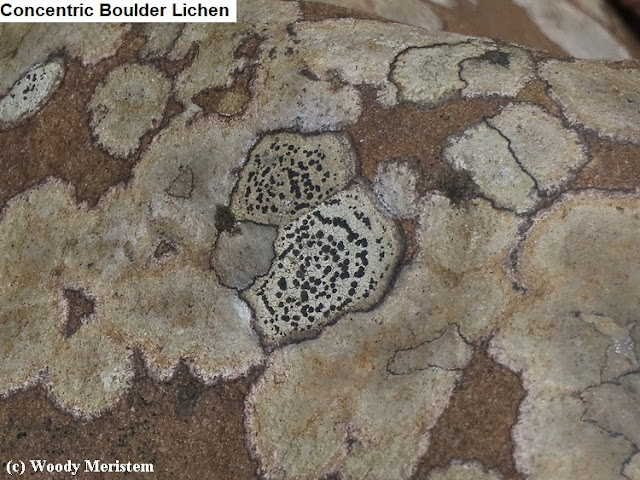 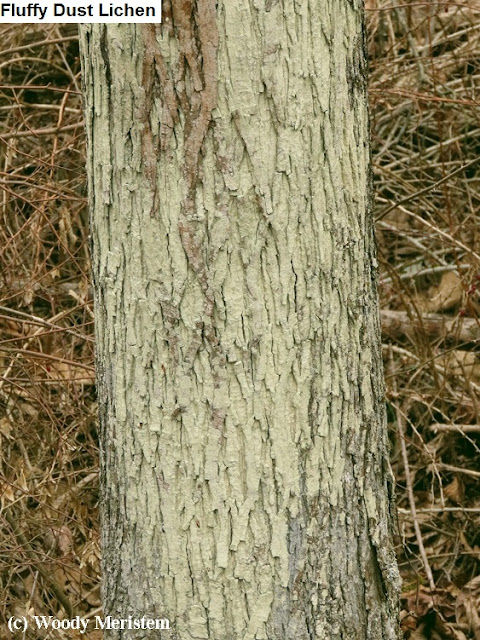 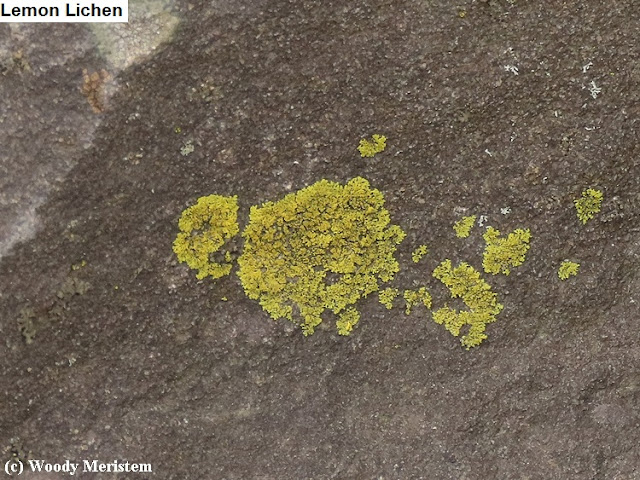 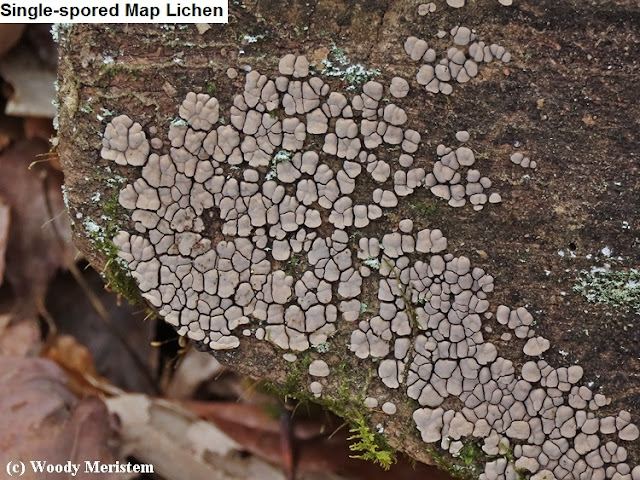 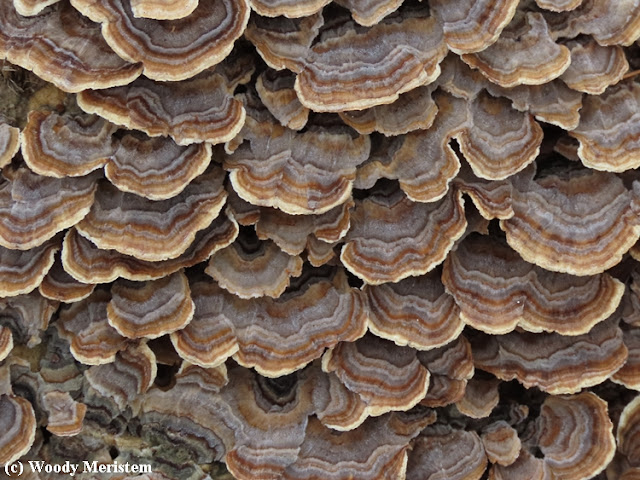 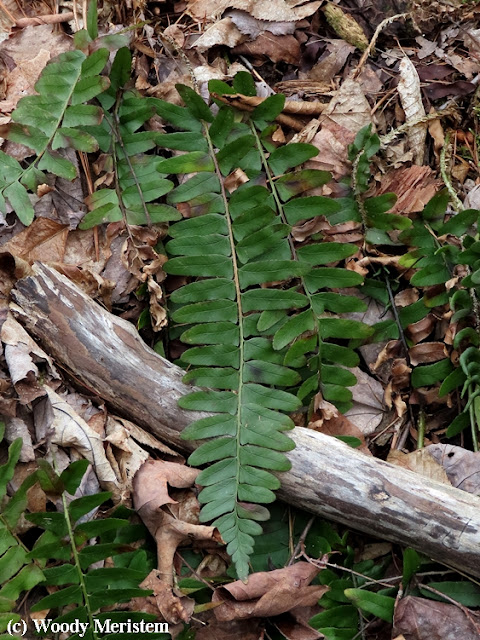 Bright green moss covering the rocks in a stream – 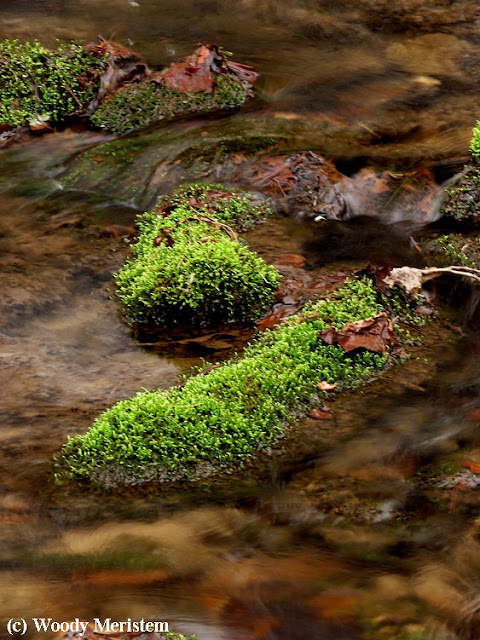 The tunnel created by a sugar maple borer many years ago – 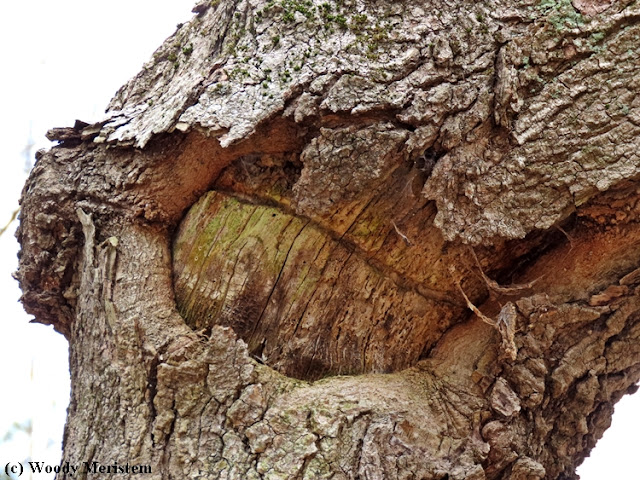 A deer skull that someone had hung in a small tree – 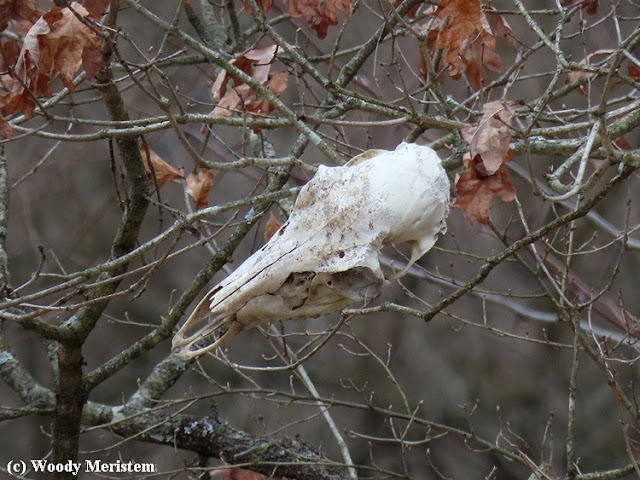 Beneath an abandoned chunk of firewood, a red-backed salamander – the most abundant vertebrate in our forests – 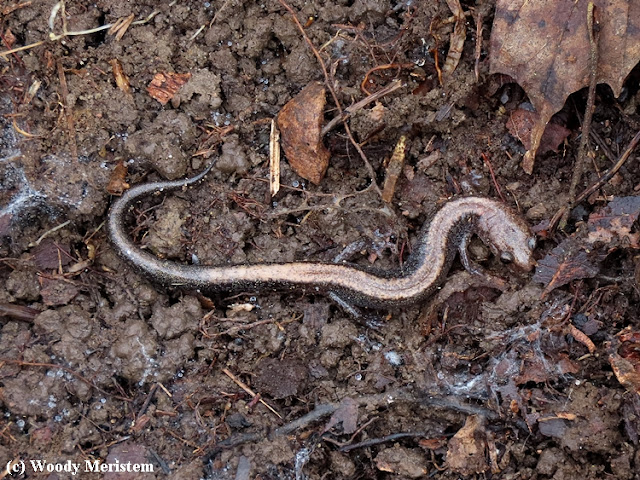 See, there's always something interesting to see in the woods.
By the time this was written I had ordered a new helmet, the ribs had healed and the signs of the concussion were fading away (no wisecracks).


If you ride a bicycle please wear a helmet!

Winter on the Rim

For the past several years one of my camera traps has been along a wildlife trail on the rim of the Allegheny Plateau in northcentral Pennsylvania. The trail generally follows the rim which is also the transition between a mixed oak forest on the dry soils of the plateau and a birch-maple-hemlock-oak forest on a steep slope dropping into a deep valley. Large outcroppings of bedrock and a great number of large rocks and boulders that originated from the outcroppings occupy much of the slope.


There have been a number of previous posts about the photos and videos that the various cameras at this spot on the rim have captured, including a bobcat’s pursuit of a gray squirrel, a female black bear with cubs, a pair of eastern coyotes, a flying squirrel and wild turkeys.


To me winter is what is often described as meteorological winter – December, January and February – when the days are short, the temperatures low and with long-lasting snow cover. This has been a relatively snowless winter, and fairly warm at that. Here are the best of the winter’s videos (in the order in which they were taken) from the camera on the rim –

Some geese were beginning to head north and the first mixed flocks of blackbirds had arrived by the end of February, spring is on its way.
Posted by Woody Meristem at 7:10 PM 6 comments:

What a beautiful day – crystal clear, not a cloud in the sky, cool and breezy. H and I headed north where there was said to be a bald eagle nest along a tributary to the Susquehanna River. Even though we’ve driven along the road paralleling the stream in the past we’d never seen the nest. Voila, there it was near the top of a large black willow growing along the stream – 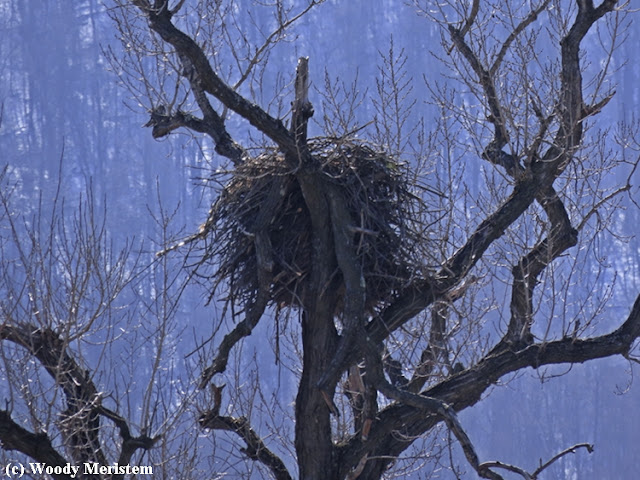 We stopped for a look and saw, off to the side, an adult bald eagle soaring high over the road – 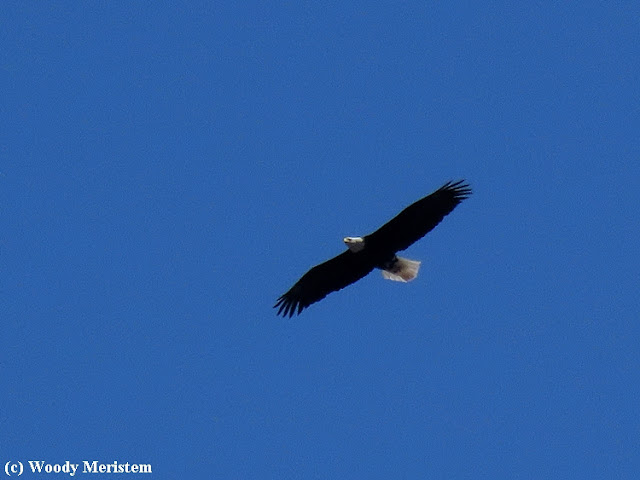 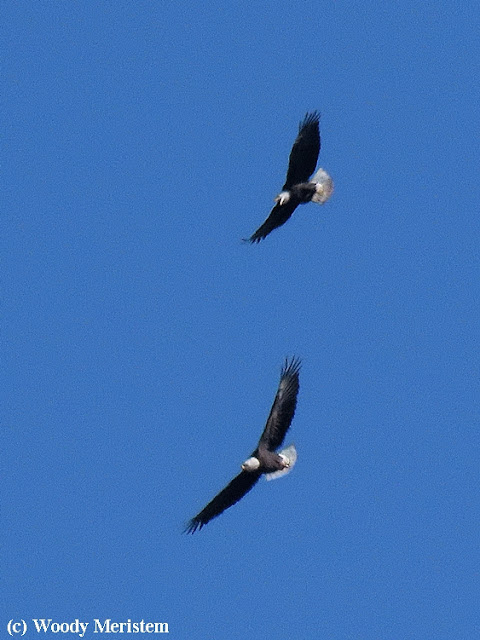 Even further away, was an immature bald eagle – 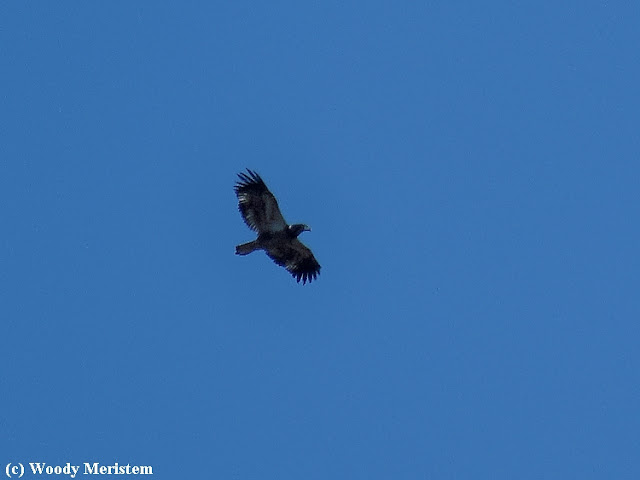 Apparently the two adults were in the process of driving the immature bird from their territory, especially since it was so close to the nest. The three birds rapidly soared out of sight and, as they departed, a pair of common ravens flew in; one of which landed in the nest tree – 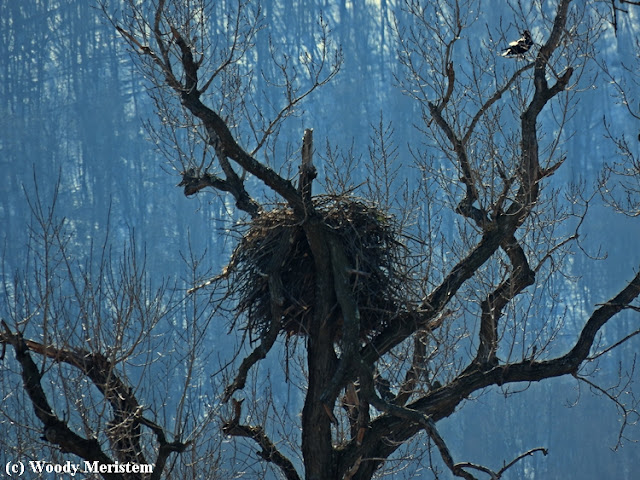 We were facing into the sun which made it hard to see what was happening at the nest. Knowing there was a road on the other side of the valley, where the sun would be at our backs, we rapidly headed that way. Unfortunately, a wide bend in the stream without a corresponding curve in the road now put us almost 500 yards from the nest instead of less than 150 yards as we had been. 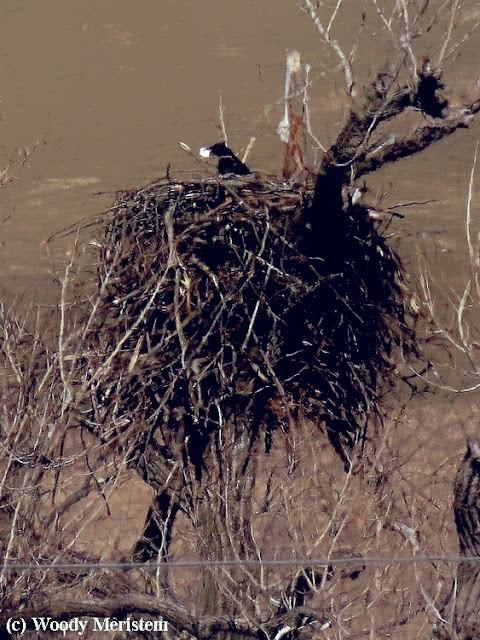 The raven with, its pilfered egg, took flight and disappeared – 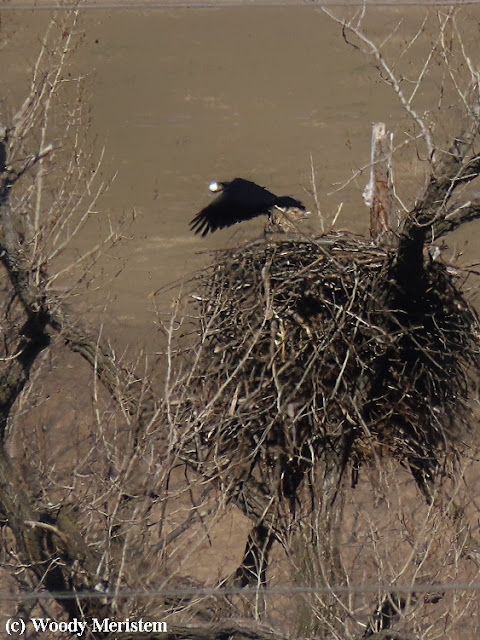 In defending their territory the eagles lost an egg, but the raven gained a meal – such is life in the natural world.

Several years ago I watched a raven carry off an egg from a mallard’s nest, and the duck eventually lost her entire clutch to the raven which made repeated trips to get duck eggs.


Will that also happen to this pair of bald eagles? Was that the eagles’ only egg, or just one of the two or three they would probably have this year? If there are more eggs in the nest, will the raven return to get them all? Do the ravens, this most intelligent of our birds, watch the nest to see if the eagles have left? If the eagles lose all their eggs will they have more, or is it now late enough in the year that there will be no more eggs until next year?


In any case, watching the raven take the eagles’ egg was a fortunate sighting, getting the photos was a bonus – even if the photos are far from the best.

Note: Some folks may feel compassion toward the eagles that lost an egg. While that egg will not produce an eaglet, the raven gained a meal it needed. Likewise, bald eagles pressure osprey into surrendering fish, and regularly kill other animals for food. The natural world is neither kind nor cruel, it is just the way it is.