"There Ain't No Deer"


Sometimes it seems that the most abundant critter in the autumn woods is the disgruntled deer hunter. One of my acquaintance keeps muttering “There ain’t no deer” throughout the late fall-early winter when he’s once again spent several weeks deer hunting. This fellow is a dedicated hunter who’s certainly taken his share of bucks over the years – he wouldn’t shoot a doe under any circumstances.

Like a lot of deer hunters his measure of success isn’t necessarily whether he shoots a buck but how many deer he’s seen during deer season; research done in many states shows that is true for most deer hunters. And like many deer hunters, he thinks that if he doesn’t see deer “There ain’t no deer”.

Camera traps help to reveal the actual situation regarding deer and their abundance – those cameras aren't perfect, but they see things mere humans miss. Looking at the photographs taken by the camera traps on the hill above the house, it’s obvious there are a lot more bucks out there than most of us realize. 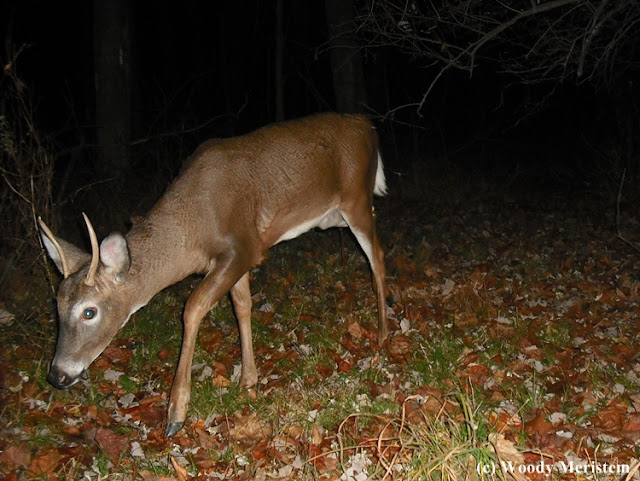 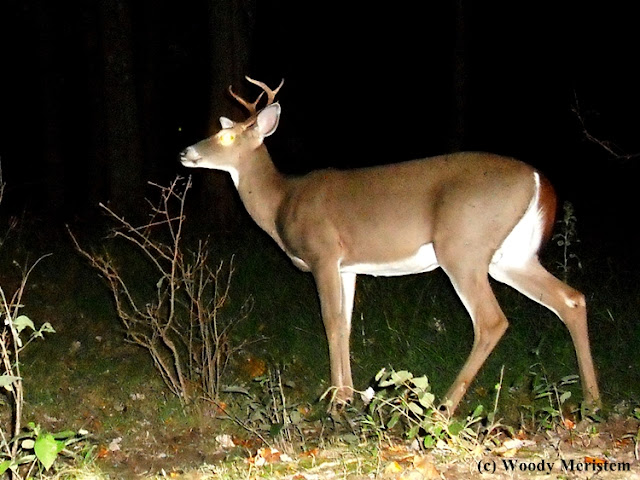 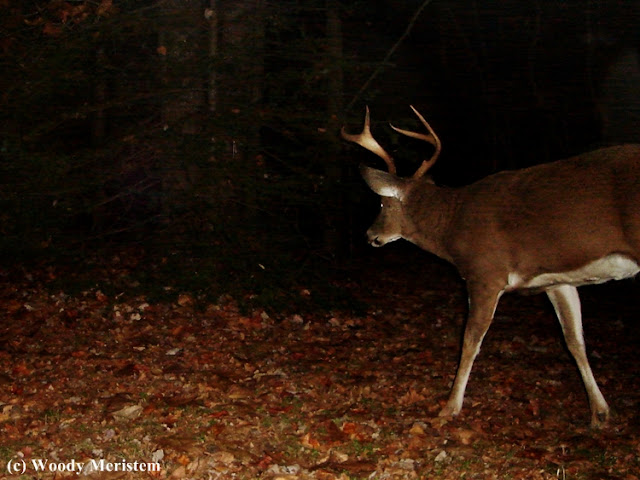 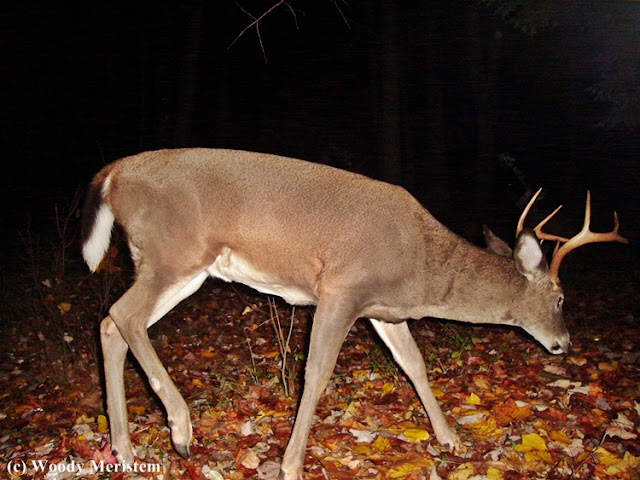 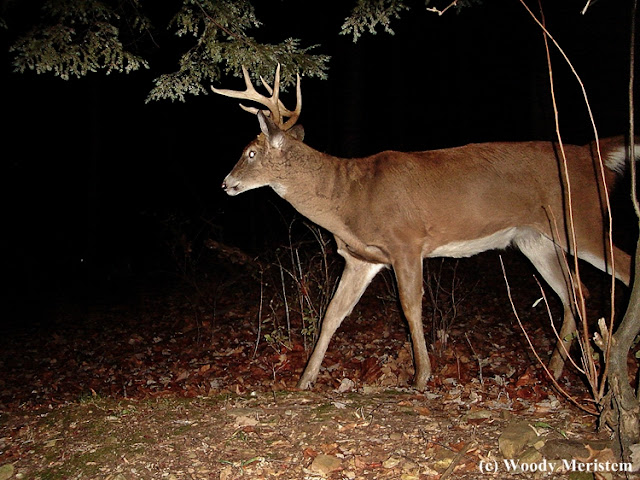 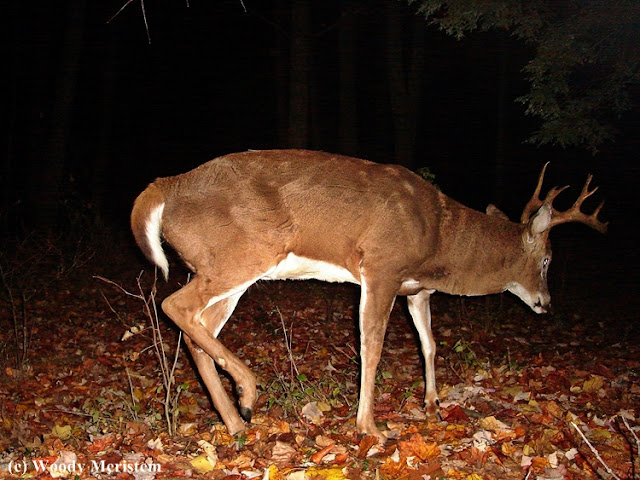 I also had a camera trap at our son and daughter-in-law’s place this fall. Now our son says he never sees bucks other than spike bucks at his place, but that camera trap had photos of bucks he’s never seen – 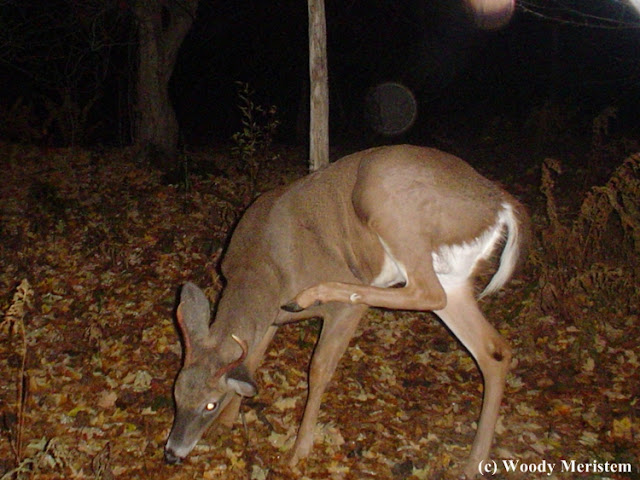 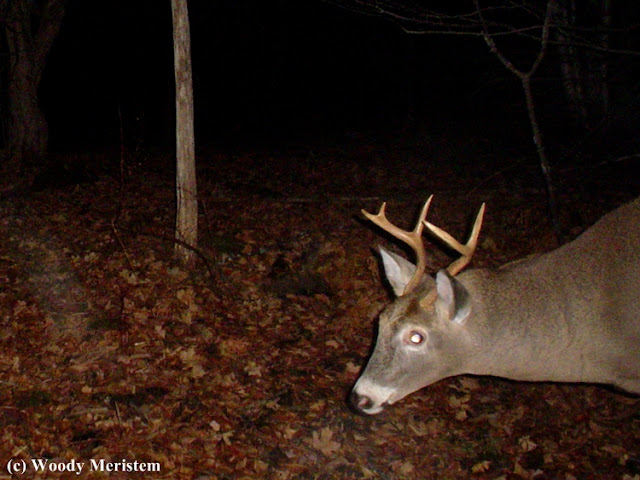 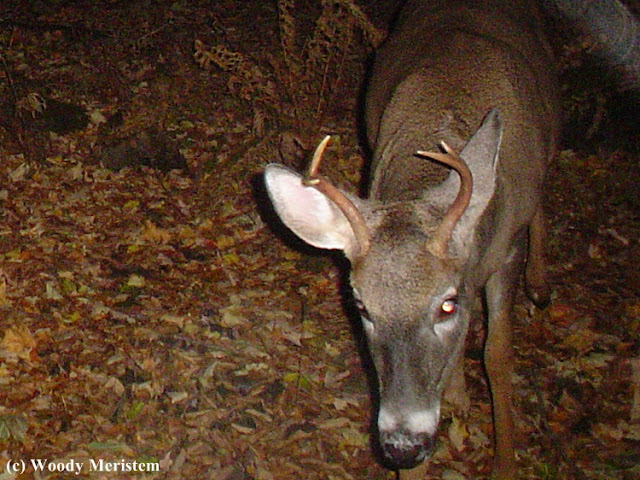 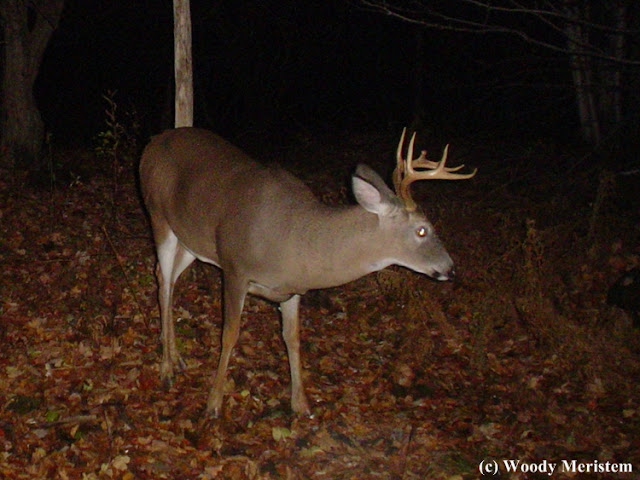 All this fall I’ve had several camera traps at Bill’s. Although Bill doesn’t hunt, another friend and his son regularly hunt on Bill’s 55 acres and keep a tree stand about 200 yards uphill from one of the camera traps. Both the camera and the stand are at the edge of a steep drop-off into a stream valley; the edge is a natural travel corridor for many species of wildlife. Neither Bill nor his hunting friend have seen any deer other than does and a spike buck. But the camera traps reveal the bucks that frequent Bill's place – 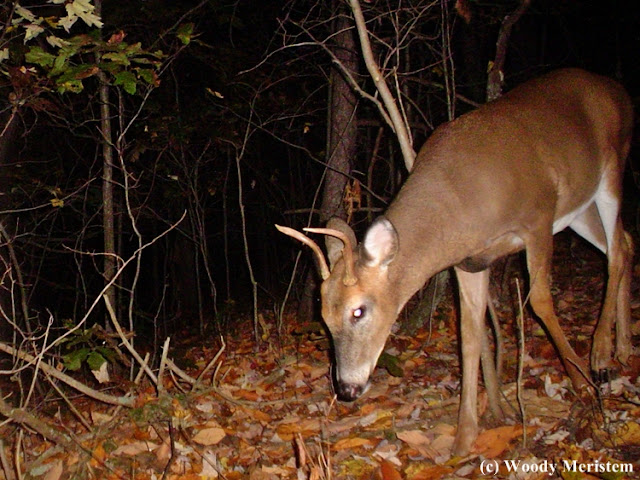 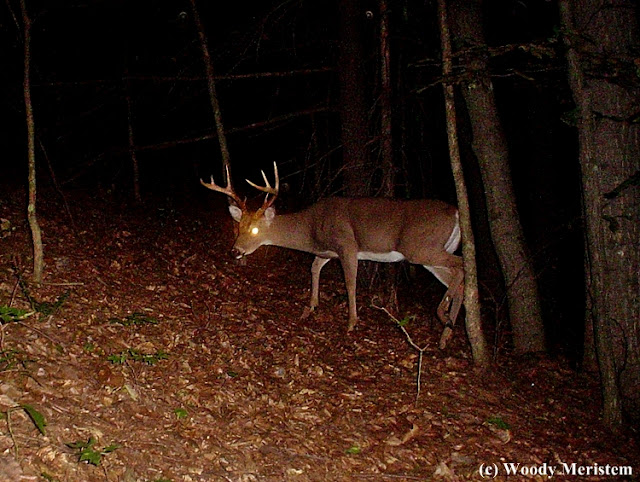 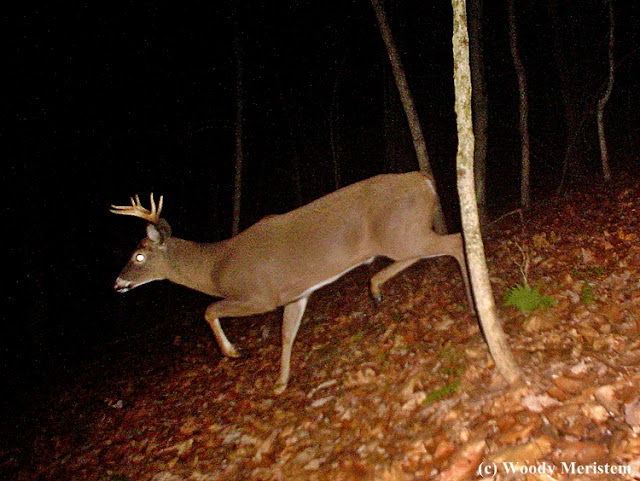 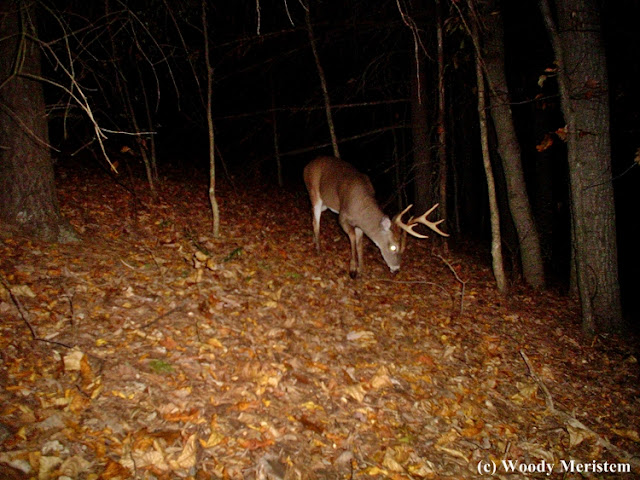 So, it seems there are bucks out there, but they aren’t being seen. And my response to “There ain’t no deer” has become “Oh no?”
Posted by Woody Meristem at 5:14 AM 9 comments:


‘Tis the season for Christmas trees, mistletoe, holly wreaths and garlands of ground (or princess) pine. It’s also the season for the alleged “War on Christmas”. Actually, it’s time for the winter solstice – when daylight is at its shortest of the year. The sun rises late and sets early and a lot of people feel depressed because the days are short and the nights long.
All that greenery, the trees, holly, mistletoe and garlands are versions of traditions that date back thousands of years. The Norsemen of Scandinavia, the Druids of ancient England, Celts of the British Isles, Germanic tribes and the ancient Romans and Egyptians all celebrated the winter solstice, using evergreen plants or boughs during the celebrations. The evergreens represented eternal life and an assurance that plants would grow again in the spring. 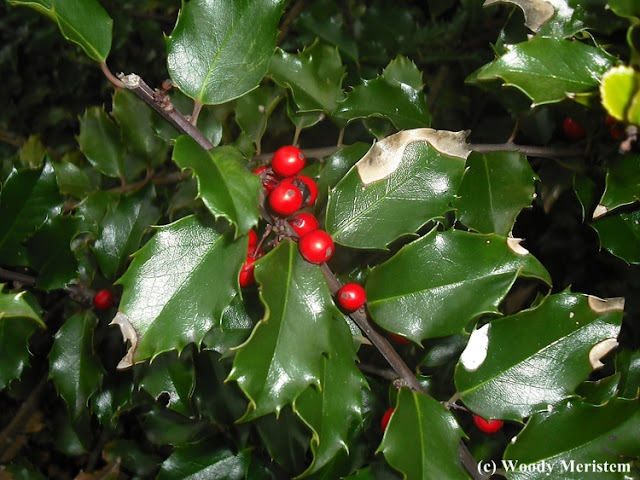 The first widely documented use of a Christmas tree more or less as we know it apparently occurred in 1510 in Riga which is now the capital of Latvia,; although the custom was apparently fairly widespread in Germanic areas of northern Europe in the 1400s. Reportedly the first use of candles to light a Christmas tree was by Martin Luther ---- yes, that Martin Luther.
The Christmas tree apparently came to America with the Hessian troops who fought in the American Revolution and became more common as German immigrants settled in Pennsylvania. But the use of greenery was slow to become widespread in America; into the 1840s Christmas trees were still seen as pagan symbols. 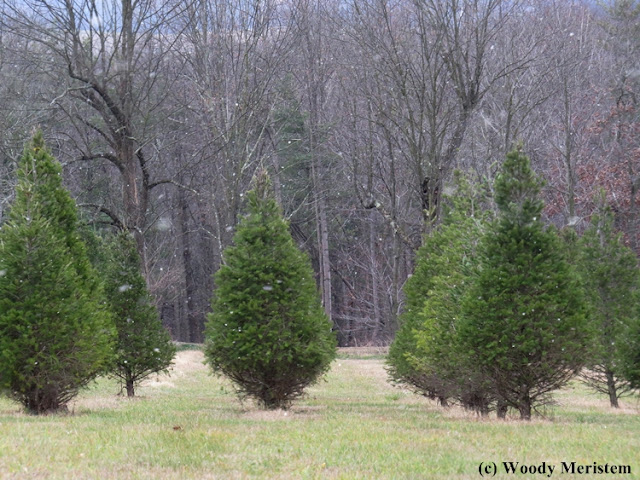 When I was a boy we always had wild-cut trees, but today virtually all Christmas trees are plantation grown of a few favored species – balsam and Frasier firs, Douglas-fir, Scotch pine, white and blue spruce and white pine. Pennsylvania has long been considered the leading producer of plantation grown Christmas trees in the nation with thousands of acres in production. 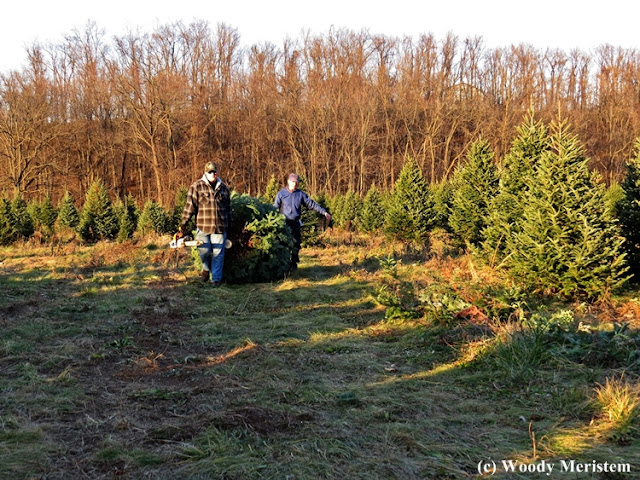 
Took a walk along the river on a pretty and quite warm morning – a morning that was way too warm for this time of year, but we’d best get used to it.


However, not everything is bleak for a naturalist, for on top of the electrical transmission tower that is one of their favorite perches was a pair of adult bald eagles. 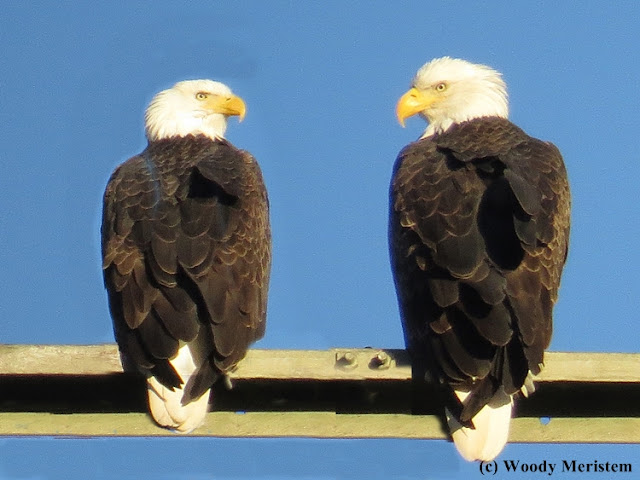 Twenty years ago these two birds would have been one-third of Pennsylvania’s resident population of bald eagles. At that time there were only three breeding pairs of bald eagles in the state, all in the extreme northwest corner. This year there were at least 277 nesting pairs in the state and a possibility (probability?) of other nests that have not been reported.


Why the difference? The simplest answer is that DDT was banned. DDT, the all-purpose “miracle” insecticide that came into widespread use following World War II. But, DDT had the side effect of accumulating in the food chain and causing many species of raptors to lay thin-shelled eggs that broke under the weight of the incubating adults.
Unfortunately, bald eagles were quite susceptible to this egg thinning and their population plummeted as fragile eggs broke beneath incubating adults.


I was in graduate school when Rachel Carson’s book Silent Spring, which described the insidious effects of DDT and other pesticides, was published. How well I remember that one of the entomology professors vehemently denounced the book and its author – how wrong he was!


After a while, one of the eagles took of and flew downstream to disappear behind the riverside trees. 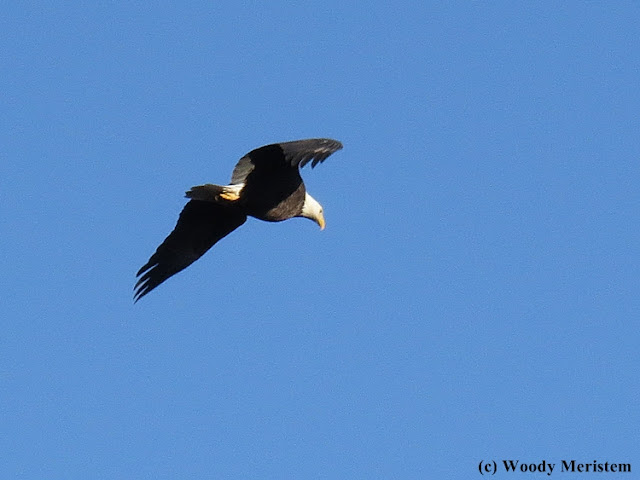 Further along, also on a favorite perch was an adult peregrine falcon, one of the pair that has nested on a nearby bridge. They didn’t raise any young this year – the old female was driven off by a younger bird and the young female didn’t nest successfully.


As with bald eagles, peregrine falcon populations were decimated by DDT’s egg-thinning effect. There were no peregrines nesting anywhere in Pennsylvania for decades until deliberate efforts were made to reintroduce the birds. 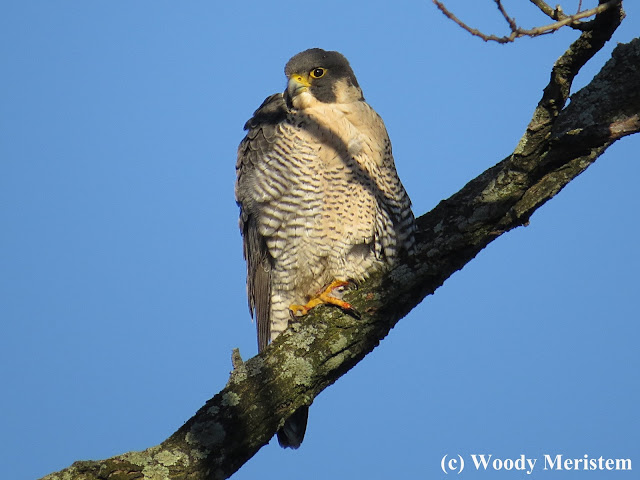 For a short time in the 1970s I knew an old fellow (he was younger than I am now – how time flies) who reportedly, 30 years earlier, had removed peregrine chicks from a cliff nest to send to a zoo. That cliff remains unoccupied by nesting peregrines as now most peregrines in the state nest on bridges or buildings. 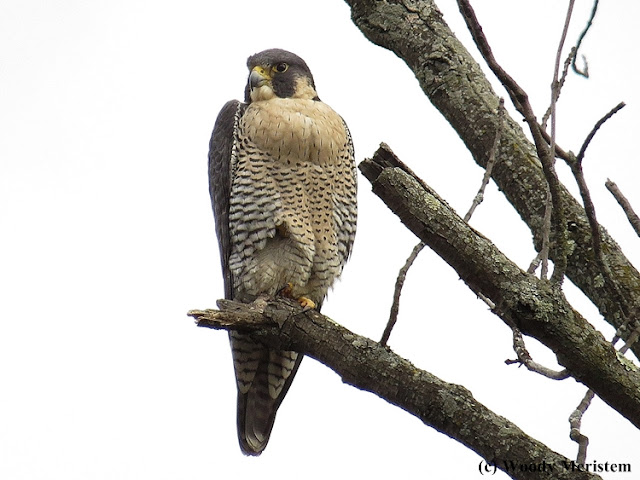 How fortunate we are to have these two wonderful birds back as nesting species in Pennsylvania.
Posted by Woody Meristem at 4:46 AM 4 comments:

A couple of weeks ago I took an eight-mile walk in the Big Woods, some of it on what turned out to be a partially overgrown trail. Because the original plan was to walk on old woods roads and maintained trails, my field pants had been left hanging in the garage and I’d worn just plain jeans. Walking on the overgrown trail, I happened to look down and there on my pants leg was a black-legged tick. By the time I got back on an old road I’d picked nine of the ticks from my pants – and wondered if I’d missed any. 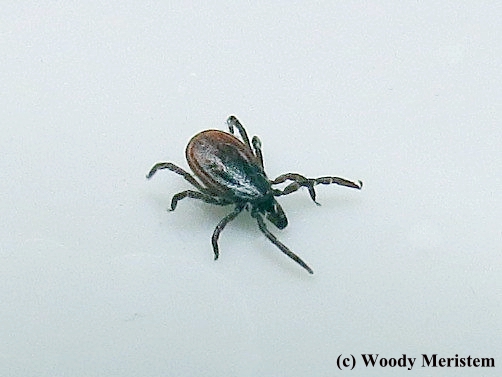 From 1970 until 2001 I’d played and worked in the Big Woods and only once found a tick anywhere on me, and that was one of the comparatively large dog ticks. Then, in the spring of 2001 a deer tick as it was called then (now re-named black-legged tick) embedded itself in my side. That was the beginning, since then I’ve had several embedded black-legged ticks each year. The total number seen crawling on my pants is now beyond remembering.

Ticks wouldn’t be anything but a yucky annoyance if they didn’t carry a number of very unpleasant diseases. Some of the diseases that ticks transmit to humans are fairly uncommon, but Lyme disease isn’t at all uncommon. Most outdoors folks have heard of Lyme disease and the debilitating problems that can result from an untreated infection – extreme fatigue, severe headaches, swollen joints and arthritis, heart problems and mental disorders. It’s not a disease that anyone should take for granted.

My field pants are regularly sprayed with the insecticide Permethrin, which is reported to have very low toxicity to mammals, be poorly absorbed through the skin once it’s dry, and rapidly inactivated if it is absorbed. Only once have I had an embedded tick following a day in the field wearing treated pants.  Permethrin works – I’ve taken ticks that were crawling on my pants and put them in a specimen bottle, 10-15 minutes later they were dead.


Spring and fall have been the worst times for picking up a tick since they require high humidity and tend to spend the summer on the ground in the leaf litter instead of on vegetation searching for a host.

Speaking of hosts, adult black-legged ticks spend the winter on deer, while the nymphs feed on white-footed mice and other small hosts in warmer weather. It’s those mice that carry Lyme disease and where the ticks acquire the parasite. Several studies have shown that in some areas as many as 30-40% of black-legged ticks carry the disease and that, while the numbers vary widely, there may easily be over 150 infected ticks per acre.


A couple of years ago a fiend and I had walked through a forested area when it was 34° and snowing. We got back to the car and there on my pants leg were two black-legged ticks crawling about. With a warming climate black-legged ticks may well be active year-round. So, all of us who spend time outdoors – farmers, hunters, hikers, fishermen, naturalists ... anyone – can expect to encounter ticks. But, that won’t keep me out of the woods and hopefully it won’t deter anyone else from enjoying the outdoors.
Posted by Woody Meristem at 4:12 AM 3 comments: