When my far distant ancestors arrived in central Europe somewhere around 40,000 years ago they had a neighbor, the cave bear (Ursus spelaeus). Cave bears were huge compared to the black bears that inhabit northcentral Pennsylvania. The largest male black bears can top 700 pounds, but large male cave bears apparently weighed 1,800 pounds, truly gigantic.

Cave bears evidently spent a lot of time in European caves, hence the name, and became extinct around 24,000 years ago when continental glaciers reached their maximum extent. The bears' preferred habitat is reported to have been low forested hills in central and southern Europe.

What do cave bears have to do with the natural world of northcentral Pennsylvania? Nothing really except the photos I recently downloaded from the camera trap I set at the entrance to a small cave brought cave bears to mind. 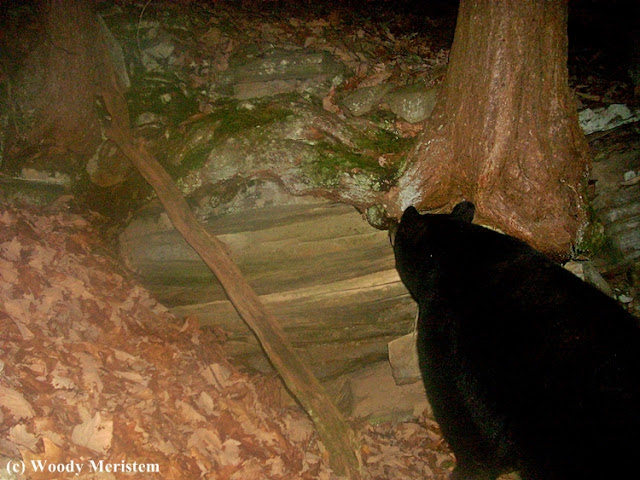 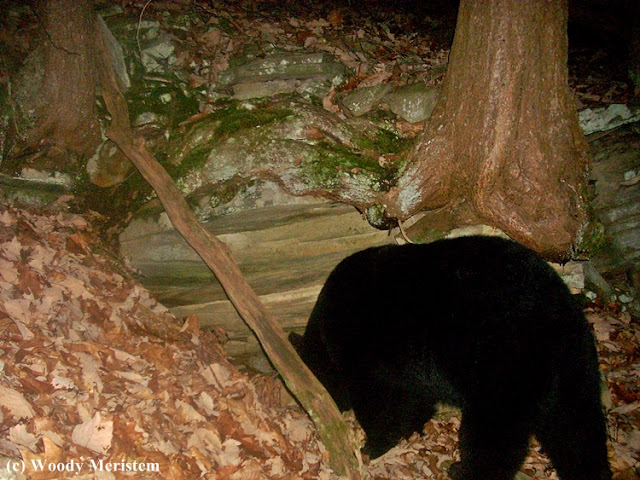 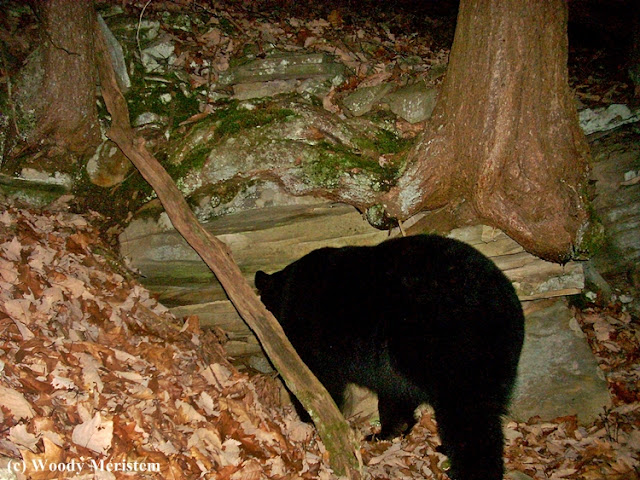 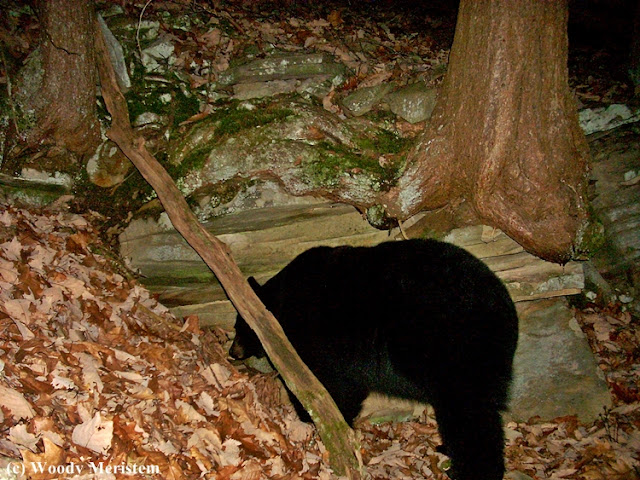 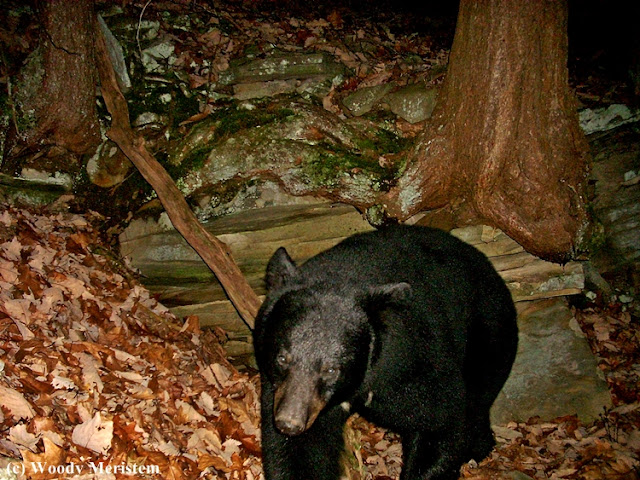 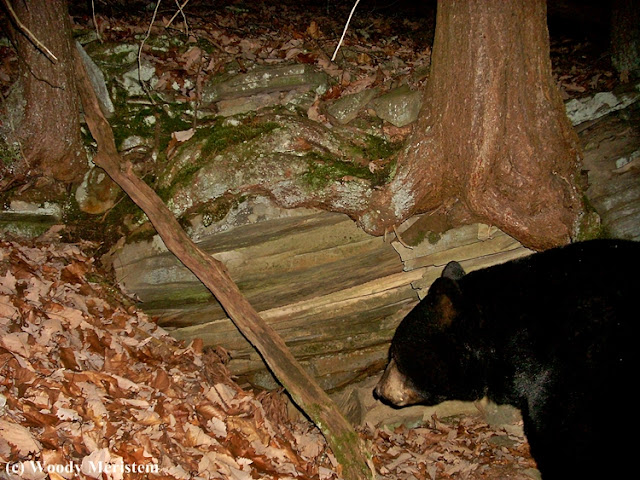 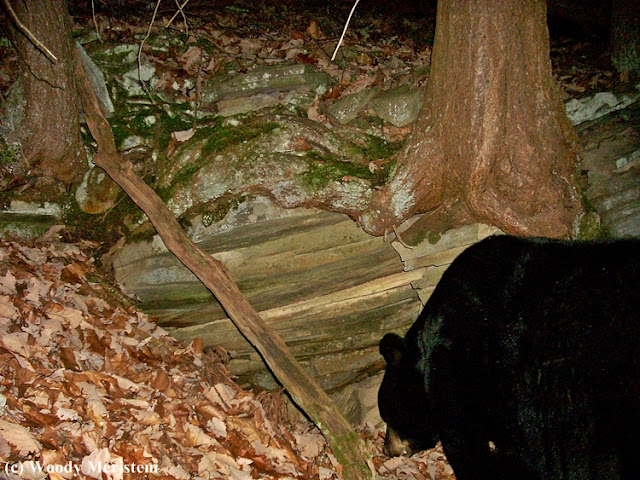 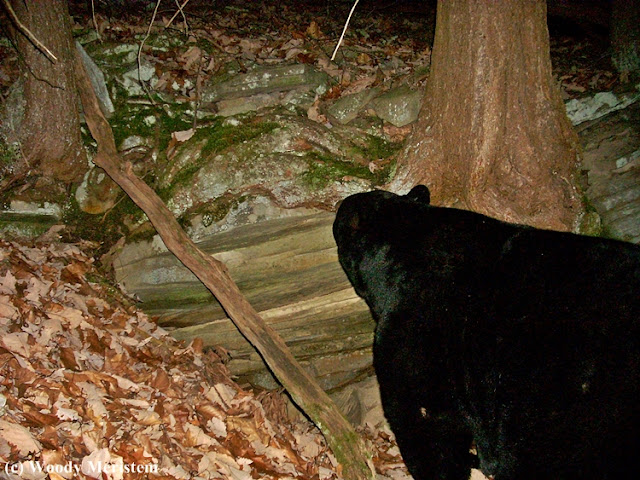 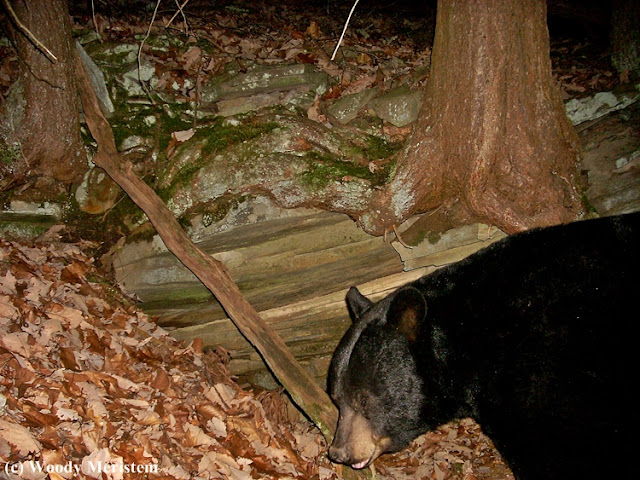 Although not as large as the largest black bears my camera traps have ever recorded, and those were nowhere near the size of the largest black bears ever documented, he was a fair sized animal and probably weighed in the neighborhood of 300-350 pounds, maybe more. He was tiny compared with a large cave bear -- but it was a bear and it was at a cave.


January 21 is Squirrel Appreciation Day, an unofficial holiday to recognize the part that squirrels play in the natural world. Although it is said to have originated as a way to encourage people to put out food for squirrels, they’re quite capable of finding food on their own. But that’s not to say we shouldn’t enjoy and appreciate them.

In my part of the world there are four species of squirrels; one is a ground squirrel the other three are tree squirrels in that they spend a lot of time in trees and typically use tree cavities for shelter. One species is nocturnal; the other three are active in daylight.

The eastern chipmunk is our ground dwelling squirrel, although few people think of it as a squirrel. A ground squirrel it may be, but it does spend quite a bit of time in trees and shrubs searching for fruits and nuts and birds’ nests (yes, chipmunks eat birds’ eggs and nestlings) – 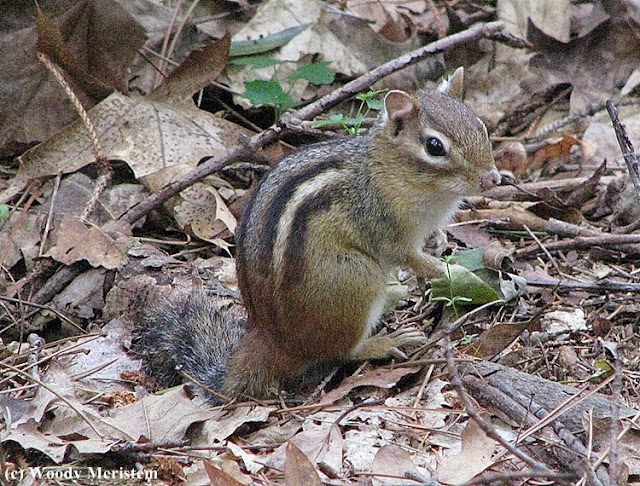 Southern flying squirrels are the nocturnal squirrels; they spend the daylight hours in tree cavities or nest boxes – and occasionally in barns or the attics of houses. Flying squirrels are seldom seen but they are often quite common and sometimes visit bird feeders during the night. By any measure flying squirrels would be judged among the “cutest” of the mammals that inhabit northcentral Pennsylvania – 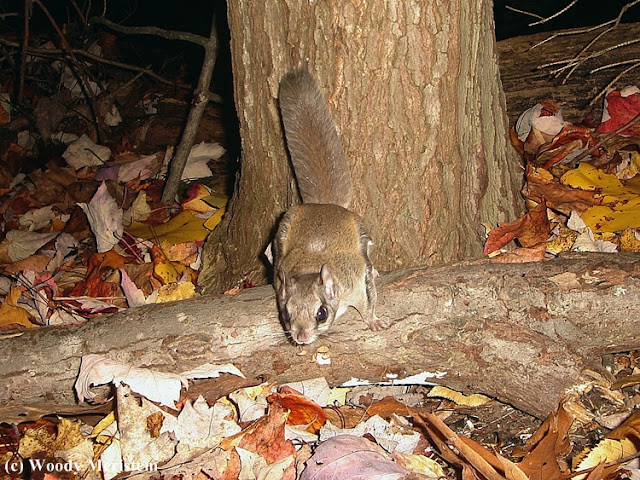 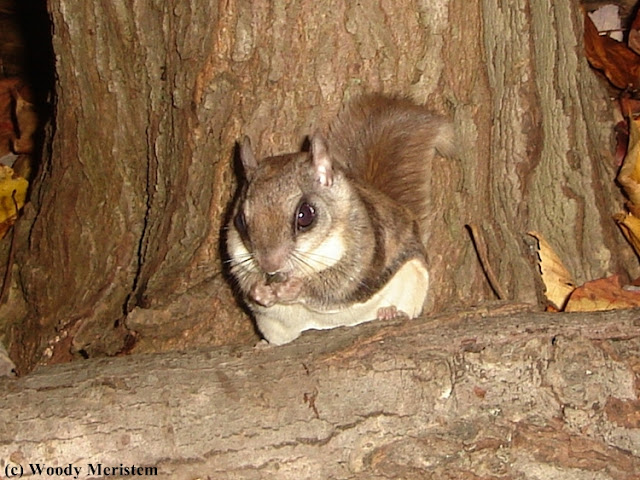 Bold and noisy, red squirrels favor woodlands with a high portion of pine, hemlock or spruce. They’re extremely quick as they dash about the treetops and can be important predators of nestling songbirds. Once, when I was walking in the Big Woods I heard something falling through the branches of a nearby large hemlock. After a long fall through the hemlock a red squirrel landed with a thud in the old road on which I was walking.  In an instant the squirrel, apparently uninjured, dashed off and back up into the hemlock. 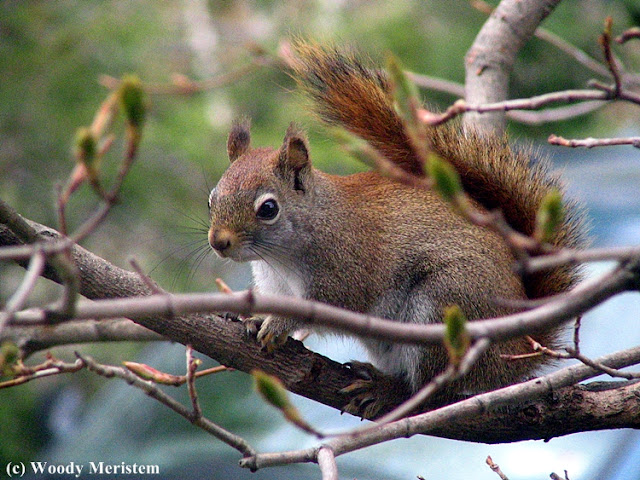 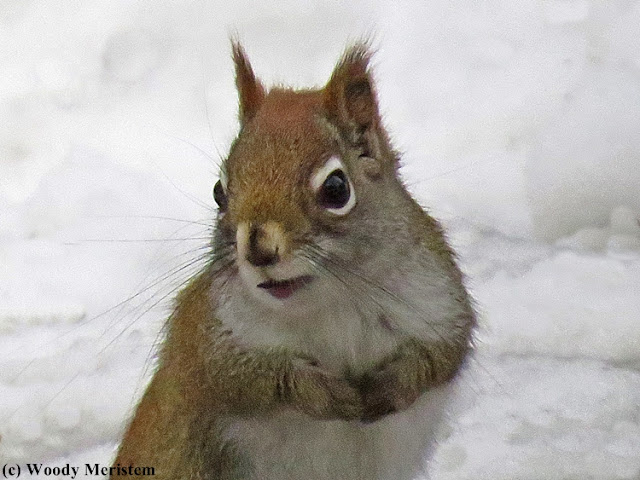 When most of us think of squirrels we think of the ubiquitous gray squirrel, the inhabitant of city parks and the raider of bird feeders. Gray squirrels can be found almost anywhere there are trees and/or a source of food – extensive forests, farm woodlots, parks, cemeteries, suburban neighborhoods, even big cities where they may live in buildings and feed on handouts and scraps. Gray squirrels have been introduced in areas to which they are not native, including Great Britain, where they have become invasive pests. 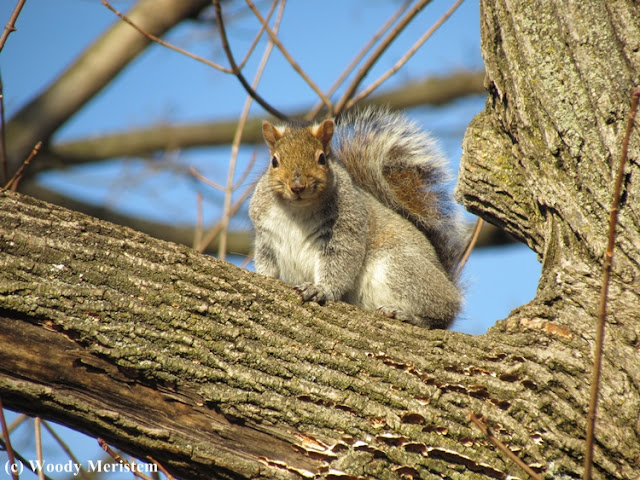 Gray squirrels can be nuisance at times, but we should appreciate that they can be responsible for “planting” a large proportion of the oak/hickory forests we enjoy and use. Gray squirrels hide acorns, hickory nuts and walnuts for later use by burying them in seemingly random places, a method called “scatter hoarding”. Some squirrels don’t survive to retrieve their hidden horde, some nuts can’t be found again, in times of unusual abundance more nuts are buried than the squirrels can eat, and thus these tree seeds are planted. 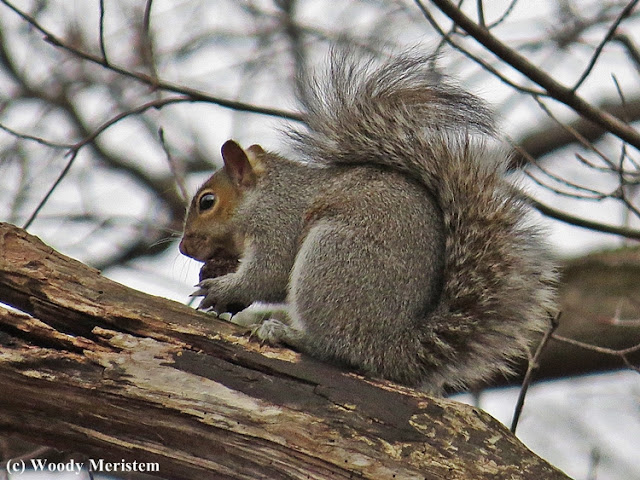 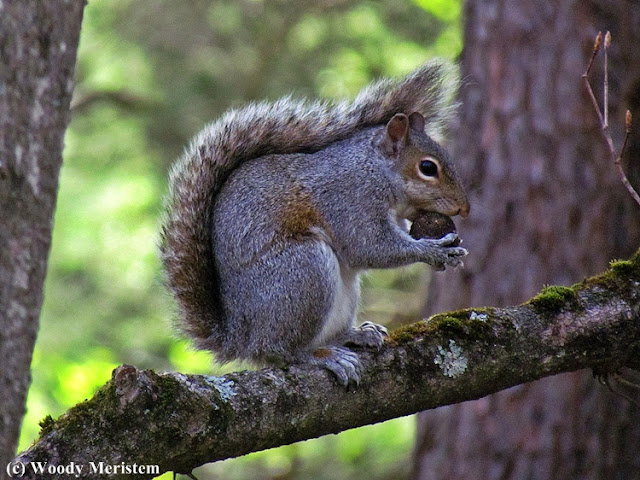 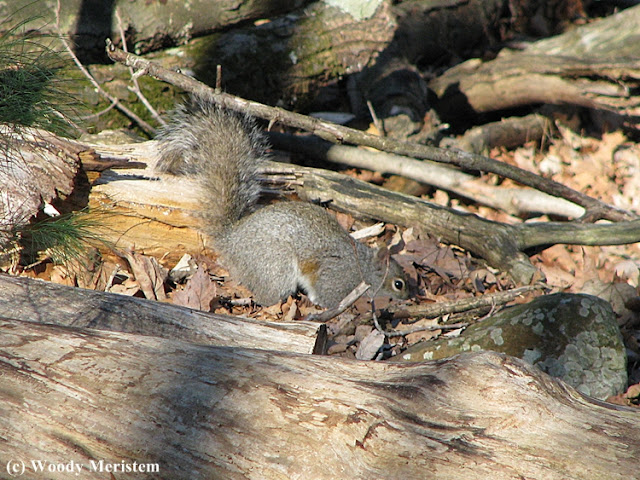 Those un-retrieved nuts are the source of multitudes of seedlings; they had been stored in the perfect place – in the soil, protected from seed predators like deer and turkeys and black bears, moist enough not to dry out. Gray squirrels occasionally carry nuts hundreds of yards before burying them and thus can help spread oak and hickory into abandoned fields. 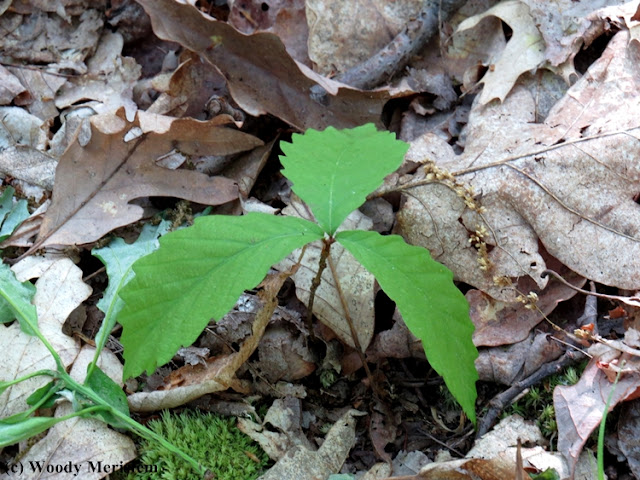 So, let’s give an appreciative tip of the hat to the squirrels.
Posted by Woody Meristem at 5:50 AM 5 comments:


On one of this winter’s hikes in the Big Woods, when the ground was covered with less than two inches of snow, I came across the tracks of several other people who had been out in the forest. A couple of those folks had been wearing snowshoes of all things! 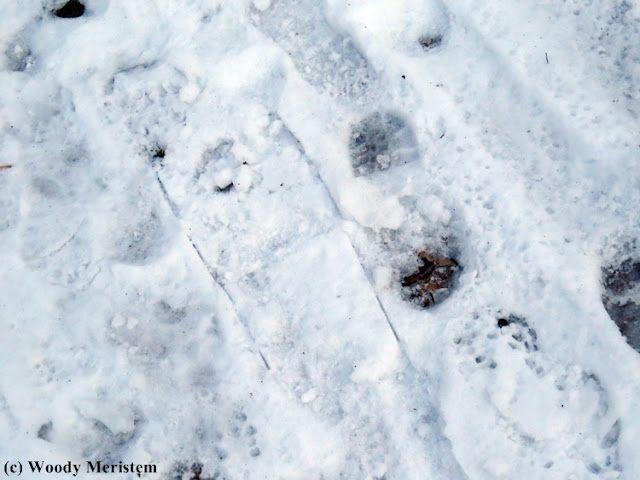 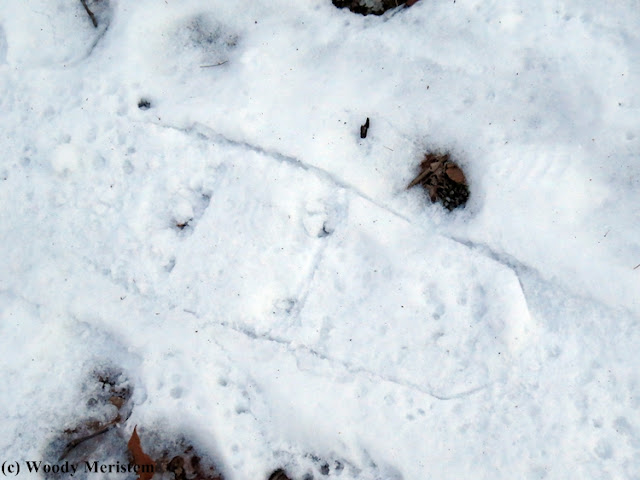 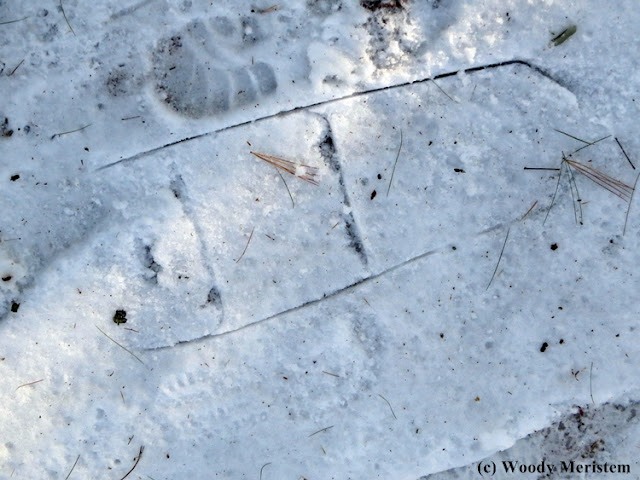 Now snowshoes are wonderful things, reportedly invented by peoples who lived in snowy areas of central Asia between 6,000 and 4,000 years ago. Those snowshoes apparently were flat wooden planks; the traditional wood and rawhide snowshoe with which we are familiar was developed from the solid wood types by migrants from central Asia after they arrived in North America.

I’m a big fan of snowshoes, having made five pairs of traditional snowshoes from scratch and re-laced even more sets as explained in an earlier post.

Snowshoes are appropriate whenever snow depth exceeds 10-12 inches and the snow is anything other than extremely light and fluffy, not when there’s only an inch or two on the ground.

Perhaps those folks felt obligated to use the snowshoes they’d purchased, or maybe they’d read some book or magazine that left them with the impression they need snowshoes whenever there’s any snow on the ground. Wearing snowshoes when there’s hardly any snow is an extremely unpleasant and miserable activity – Were they nuts?

Winter’s about half over and now’s a good time to reflect on the cold but relatively snowless winter that northcentral Pennsylvania has had thus far this season. The entire northeast has had cold weather, although the next day or so are forecast to have-spring-like temperatures – unusual for recent decades but just a reminder of how winter used to be. Projections of future snow cover don't bode well for the need for snowshoes in Pennsylvania, or skiing or snowmobiling –
This winter it’s only portions of North America that have been cold, most of the planet has been warmer than in the past –

Research on the Greenland icecap indicates that the earth’s climate is now warmer than it has been for most of the time modern humans have been on earth. In spite of the cold weather in early January, the warmest years on record have occurred in the last decade – and global temperatures are continuing to rise.

At the same time there’s now an administration in Washington filled with a bunch of people who deny that the climate is changing and have ties to the extractive industries which provide the fossil fuels that are dumping carbon dioxide into the earth’s atmosphere. Are they nuts too?
Posted by Woody Meristem at 5:28 AM 1 comment: