Several generations ago it was a farm, then came the agricultural depression of the early 1920s, followed not long after by the great depression of the 1930s. As happened so frequently, the small family farm was no longer economically viable and the fields were abandoned to slowly revert to woodland.

Now in the 21st Century the only obvious sign that part of this forest had once been a cleared field is an old stonerow among the trees. On one side of the stonerow is a mature forest with a great variety of tree species and large fallen trees, on the other side the trees are smaller and primarily species that colonize old abandoned fields. 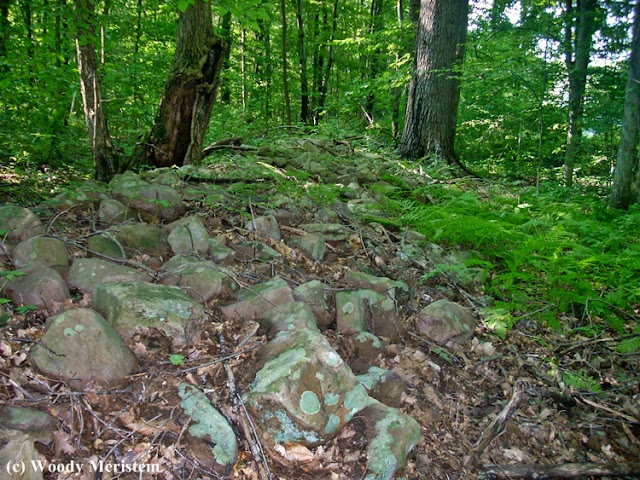 It’s a stonerow because it’s just a jumbled line of stones, stones that were never in a stone wall. It was just a place to dispose of rocks that had been laboriously picked from the field. A few pieces of old barbed wire protruding from some large trees speak of a need to confine livestock. The fairly small stones included in the stonerow are a sign that the field had not just been a pasture or hayfield but had been cultivated at some time in the past.

Agricultural history is not why we’re here today, but it is why the stonerow is in this part of the Big Woods.

Stonerows provide a focus for wildlife activity; they collect tree seeds and nuts in crevices between the rocks and harbor insects, salamanders and small mammals which, in turn, attract predators both large and small. All that wildlife persuaded this camera trapper to put a camera trap at the edge of the stonerow. The camera had been in place for several weeks, here in alphabetical order are some of the results –

The arrival of fall hunting seasons has prompted me to remove the camera since, unfortunately, not everyone is honest.
Posted by Woody Meristem at 2:31 AM 5 comments:


Monarch butterflies have been pretty scarce in northcentral Pennsylvania over the last several years; apparently that was true throughout their range. It has been estimated that the overall population has declined by more than 80 percent in the last 20 years. 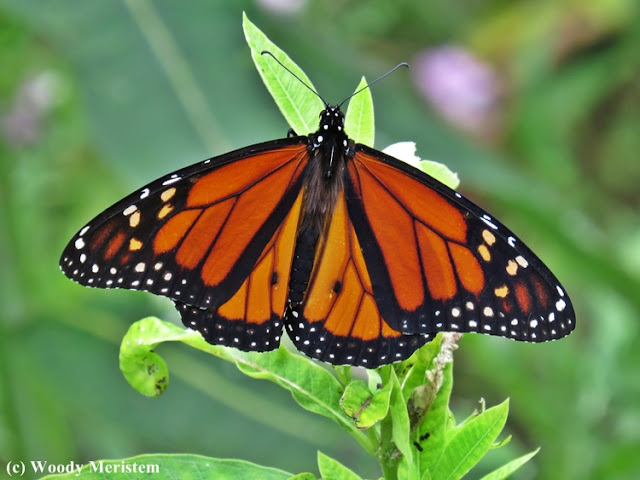 The population decline has been widely lamented in both the popular press and scientific circles – and attributed to various causes, or a combination of them: habitat loss to development or clearing for agriculture; insecticides; herbicide use that has eliminated the milkweed that is the larvae’s sole food; destruction of the small area of Mexican pine forest where the butterflies overwinter; and/or the changing climate. 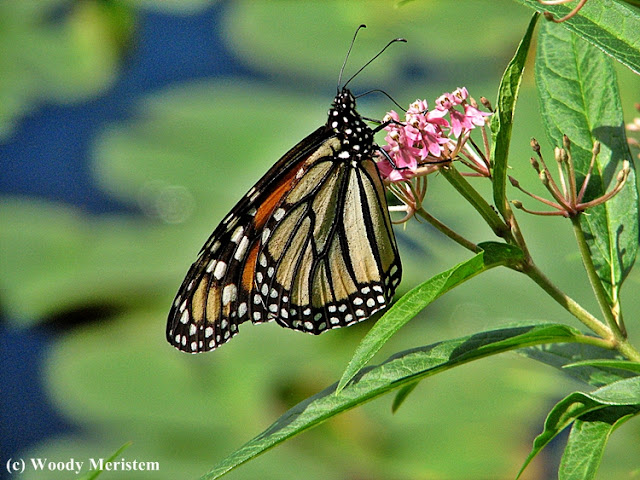 Surprisingly, this summer and early fall monarchs seem to have been everywhere that milkweed, asters and other flowers of the field were in bloom. 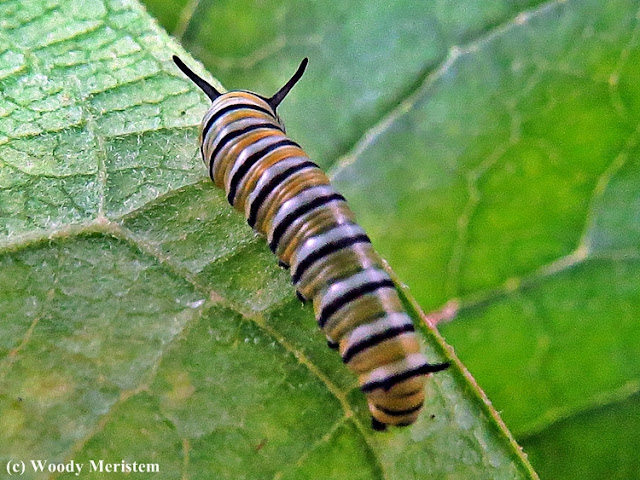 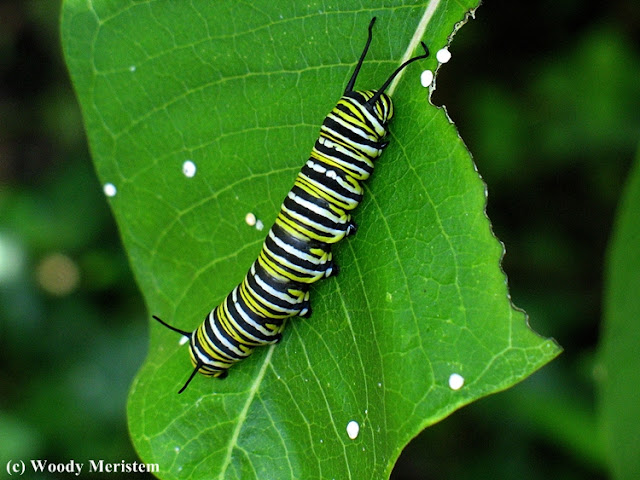 And somewhat later in the season the beautiful chrysalises – 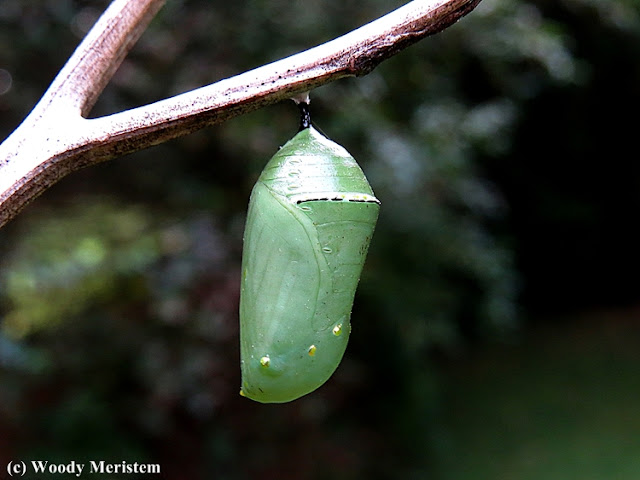 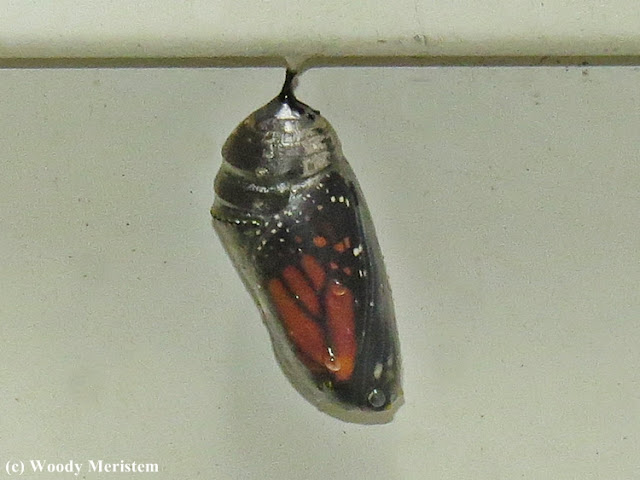 And the butterfly emerges – 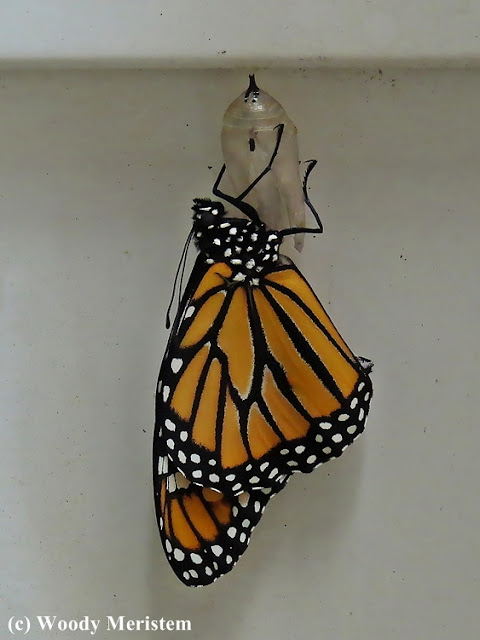 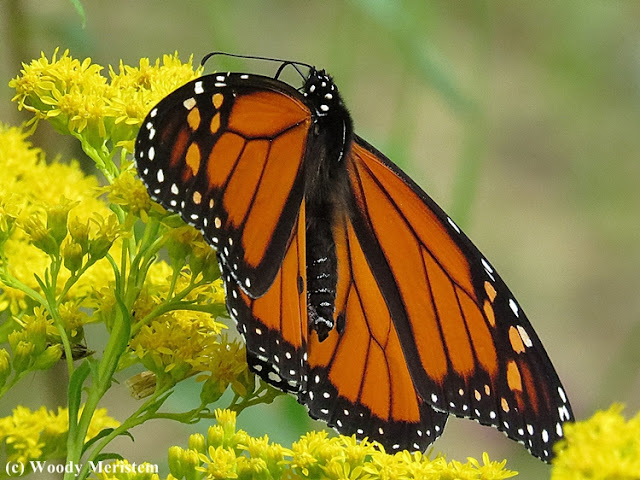 And the cause for what is an apparently sudden abundance? Will it continue or was this a one-time occurrence due to local conditions? Is it an actual population increase or just an illusion?
Posted by Woody Meristem at 1:08 AM 6 comments:

Little Foxes on the Hillside

For as long as camera traps have been on the hill above the house those camera traps have captured photographs of the foxes that have had their territories on the hill. Photographs of gray fox vastly outnumbered those of red fox for a number of years, perhaps because the red fox were dispersing youngsters that found this area unworthy of becoming part of their territories.


The cameras have photographed gray fox in all seasons: 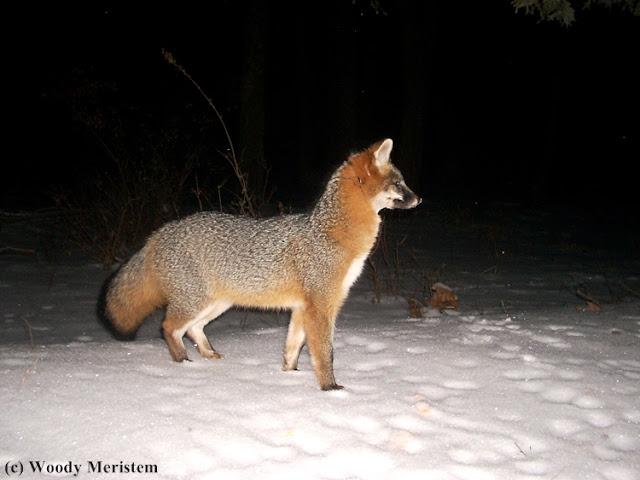 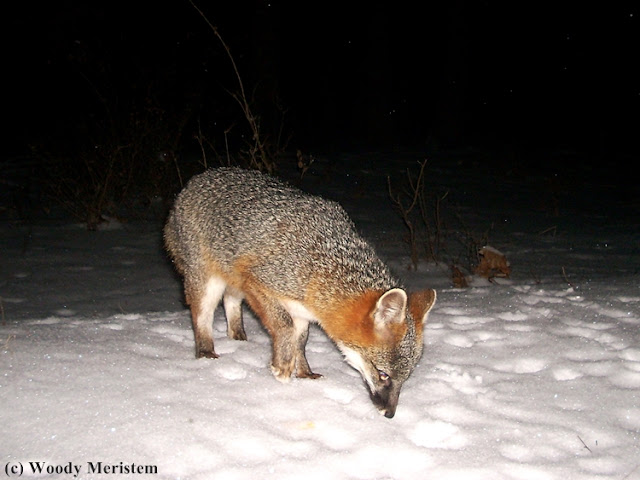 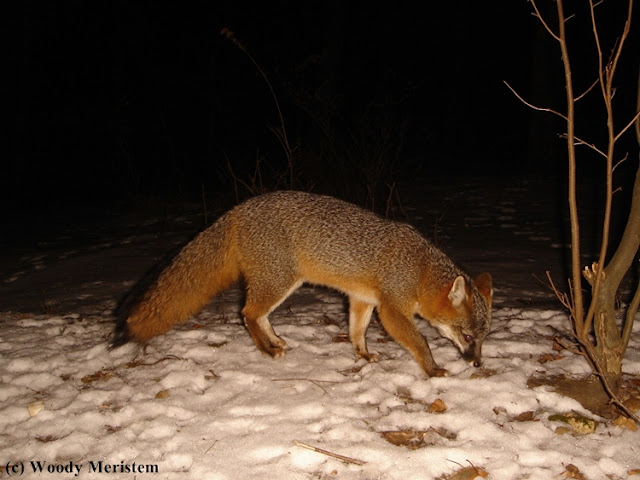 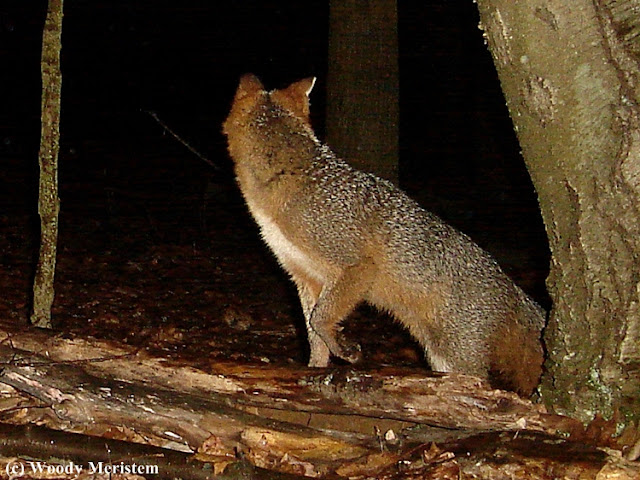 Summer when the fox is obscured by tall grasses – 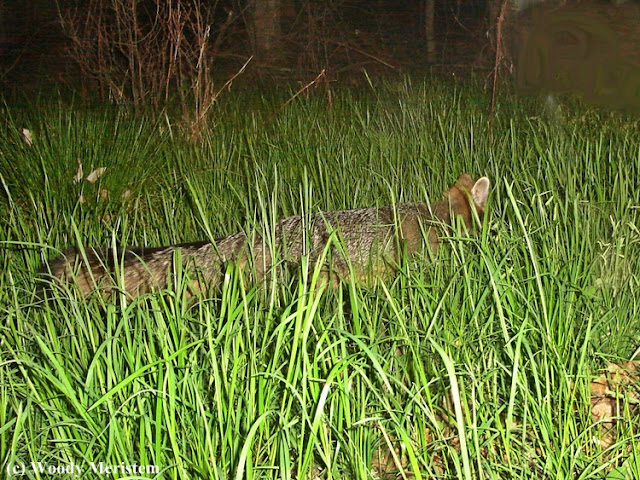 And when their molt makes them look pretty grungy – 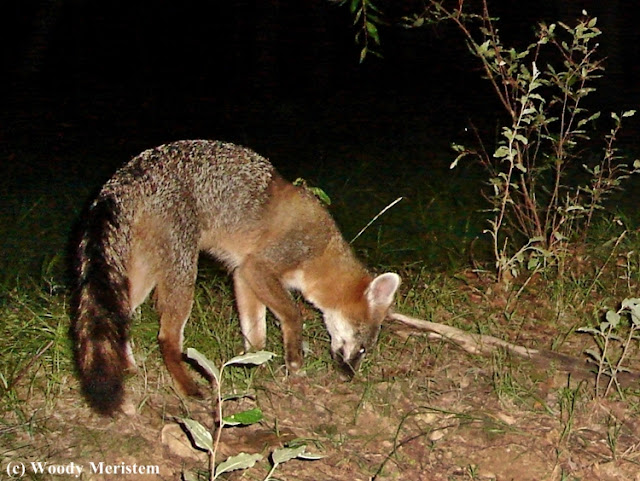 On rare occasions there have been two animals – 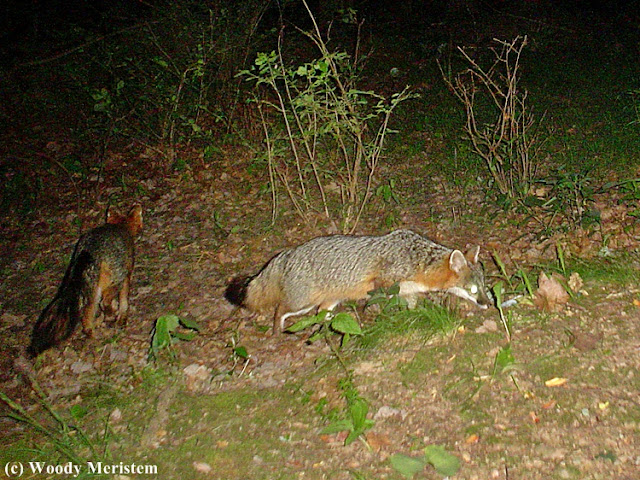 And even more rarely, when one is carrying a meal – 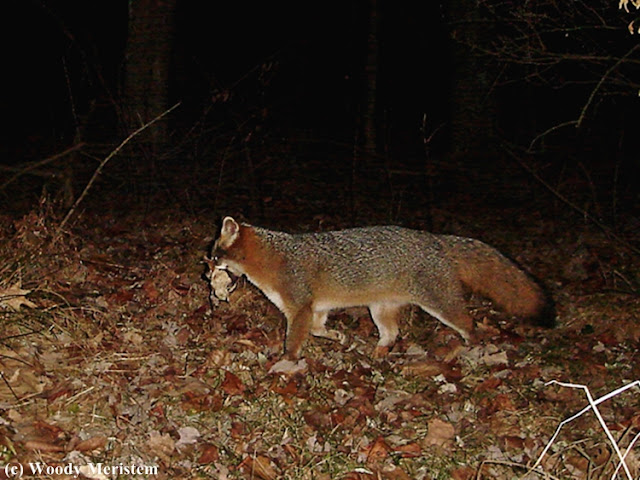 Red fox are beginning to appear on camera more regularly, perhaps a pair has established their territory in the area, and it’s a treat to find their images on a camera’s memory card – 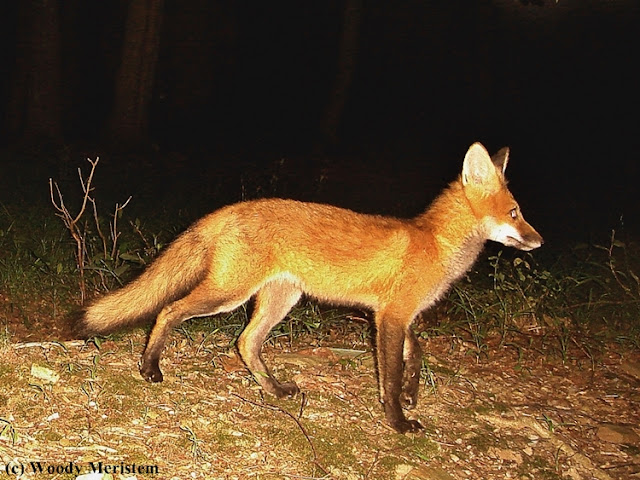 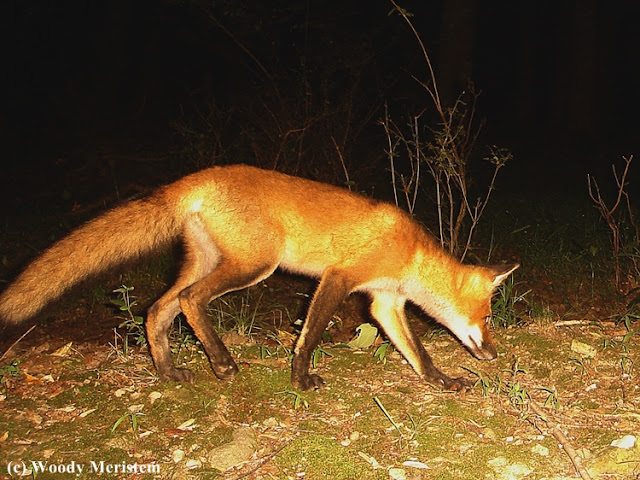 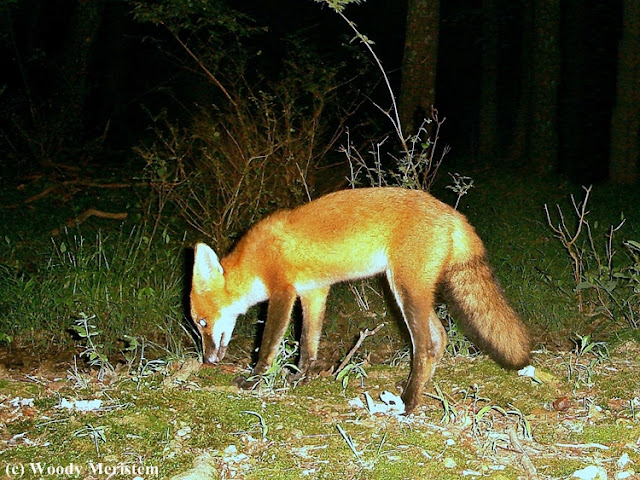 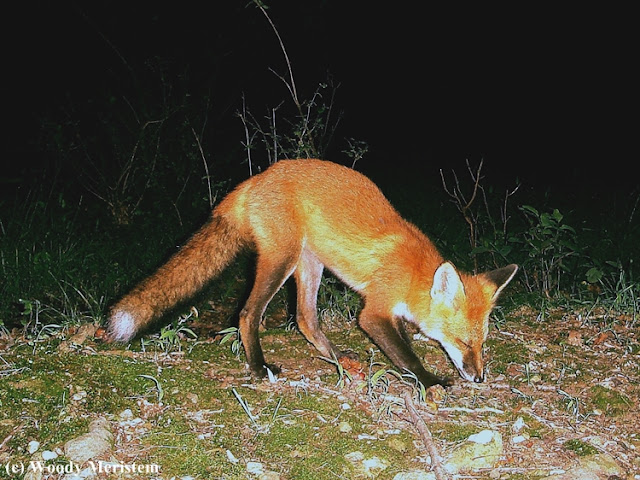 Both species have appeared in the infra-red videos taken by other camera traps on the hill. Even in the rather poor black and white videos it's easy to distinguish the two species, the gray fox by the dark stripe on the top of its tail and the red fox by its longer legs and more flowing tail –


We enjoy having the foxes for neighbors even though we’ve rarely seen them.

Posted by Woody Meristem at 2:47 AM 7 comments: