A Day in the Big Woods

It was one of those cold, damp, gray, dreary January days in the depths of winter. The days are noticeably lengthening but the sun still dim, almost all bears are in their winter dens, migrating waterfowl and songbirds are not yet coming north, and there’s little or no snow. As tempting as it was to sit by the fire with a cup of coffee laced with milk, sugar and chocolate syrup, I nonetheless headed for the Big Woods.


Remnants of the inch of snow that had fallen the day before had, in many places, totally melted, in other areas it still lay on the fallen leaves and the old road. Even though it’s the quietest time of year there’s always something interesting to see in forest and field. And so, here’s a selection of the interesting things in the forest on this dreary day.


First up was this old boundary line blaze on a hemlock. Although this is a large tract of public property and has been for many years, the boundary blazes of some of the small parcels from which it was assembled will live on for as long as the trees that bear them – 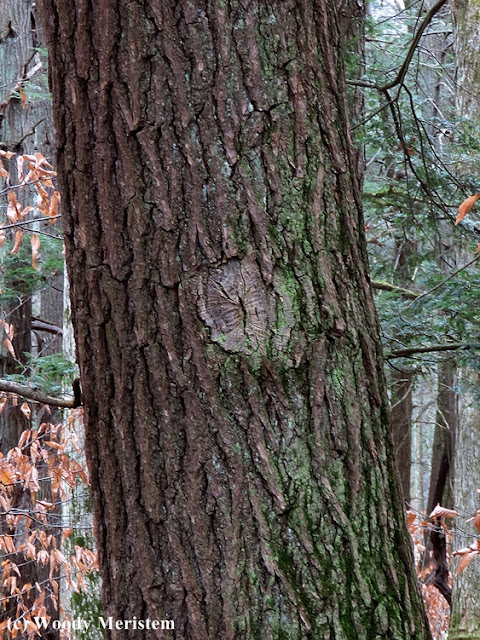 Also in the hemlock forest was this stump of a tree that had been felled long ago. There’s callus around the rim of the stump where the stump has been attempting to close the wound. How does it do that? Roots of the felled tree and a nearby hemlock had fused and that root graft has kept the stump alive for all these years – the root graft can be seen in the photograph – 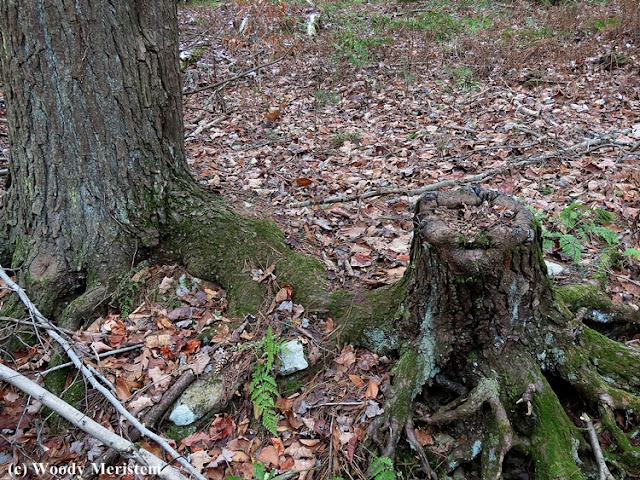 Further on a fallen dead beech tree feeds a fungus known as “horse’s hoof” or “tinder fungus”. Horse’s hoof due to its shape and appearance; tinder fungus because the crushed dried fungus readily burns so pioneers and Native Americans could easily start a fire – 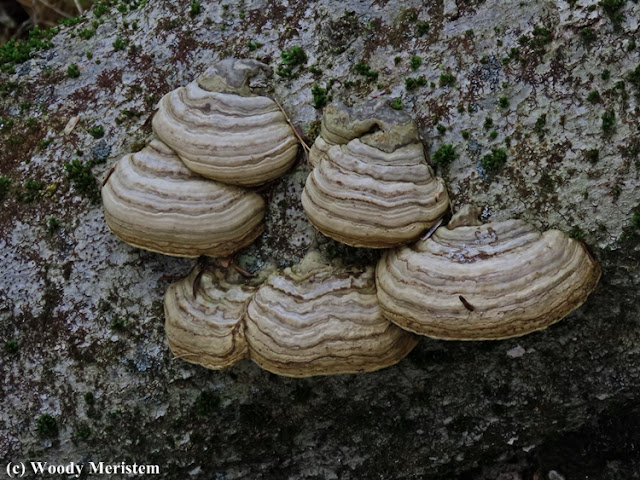 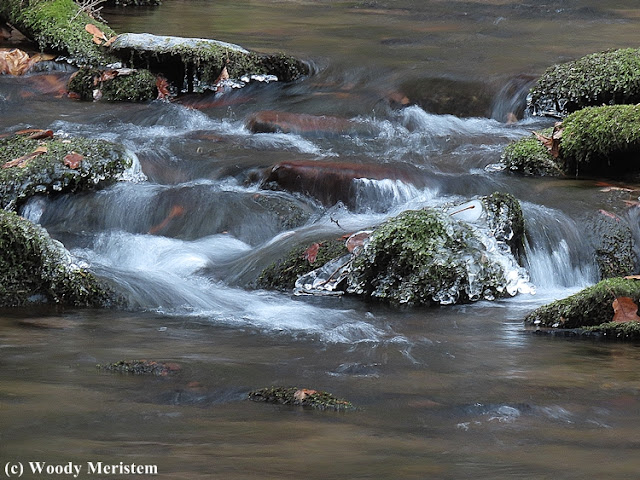 Along that stream are several areas that were heavily logged during World War II to obtain hemlock lumber for the war effort. Those areas regenerated to tulip-poplar, a tree species that is fast-growing and produces (as a co-worker used to say) tall, straight, limb-free boles, reaching to the sky – 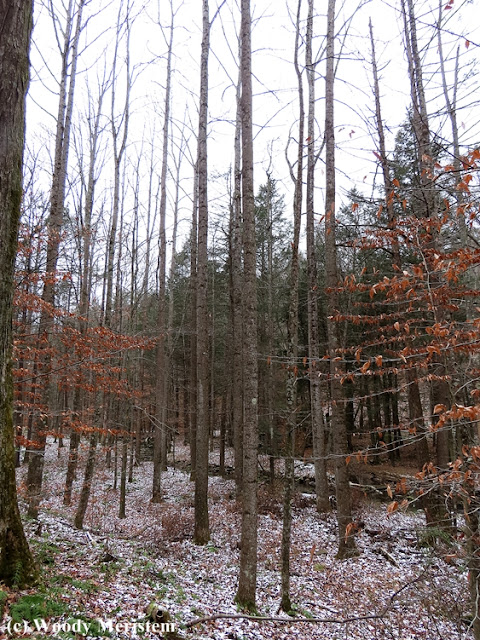 Towards the headwaters of the stream I found the seeds of a poke milkweed emerging from a seed pod. Poke milkweed is an uncommon species that grows in moist woodland and bears white flowers – 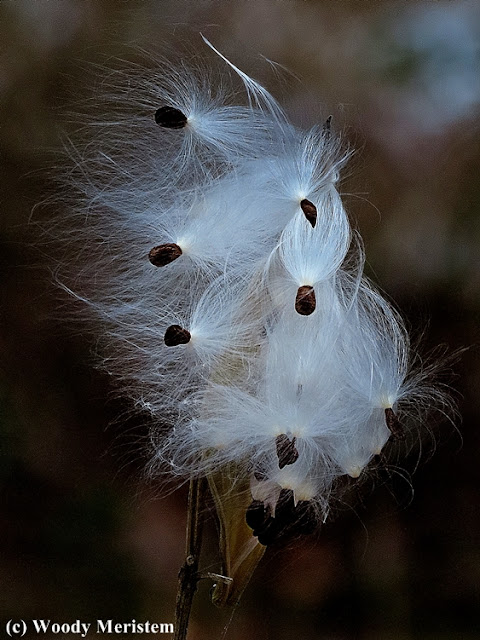 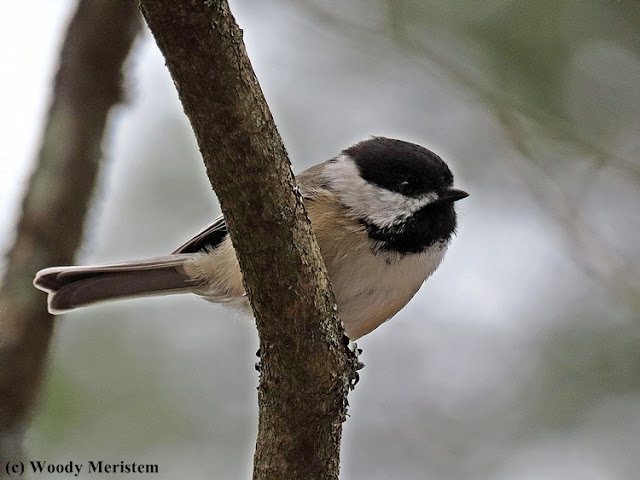 Among the fallen leaves and remnant snow was a scattering of small green leaves. Those leaves belonged to a round-lobed hepatica and they’ll stay green all winter, even beneath many inches of snow. Come early spring the plants will put forth flowers of blue, white or, less frequently, pink. No matter the color of the flowers, they’re all the same species. 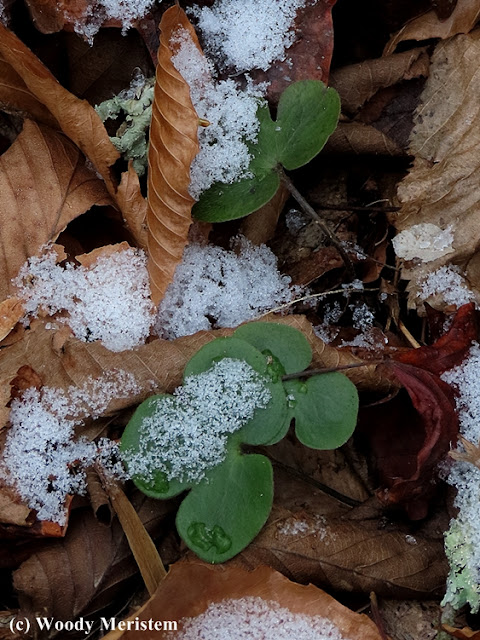 A road-side puddle had frozen, in the process producing a mosaic-like pattern – 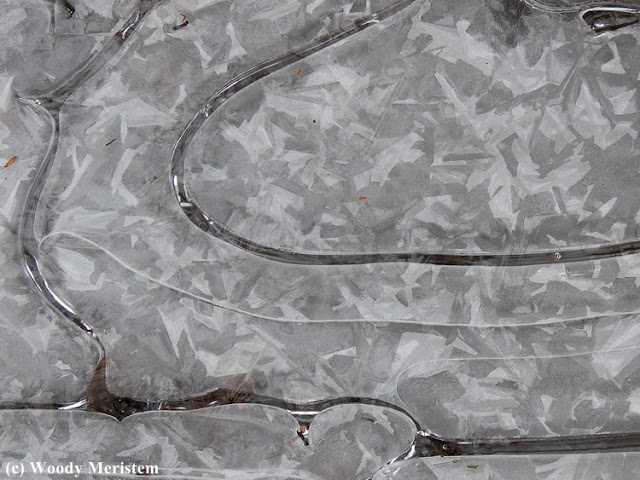 So far the walk had primarily produced photos typical of this time of year – black and white, gray and brown. I was almost back to the car when what should appear but a male cardinal that conveniently posed for several photos – 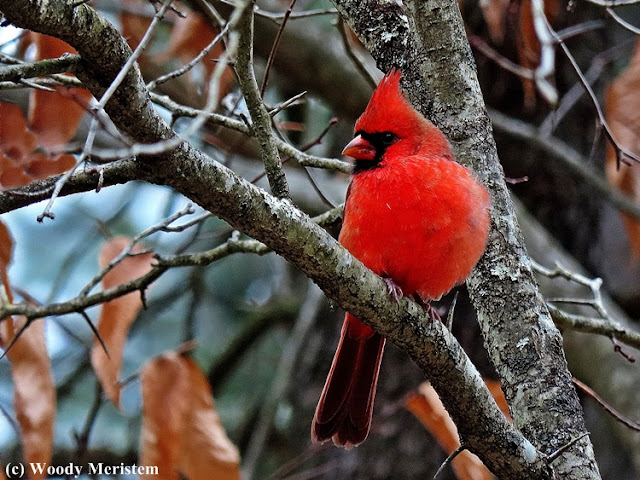 The cardinal brought his brilliant red to brighten a drab, dreary day.
Posted by Woody Meristem at 6:57 PM 4 comments:

Ruminate is a verb describing two different activities: To chew repeatedly for an extended period and/or to go over in the mind repeatedly and often slowly.


Before dawn broke H. and I were in the kitchen eating breakfast. Slowly the sky became brighter and we could see more and more details in the yard. Among those details were two young white-tail does bedded down less than 50 feet from the house. They lay there for quite some time, closing their eyes and drifting off to sleep, then waking for a while before drifting off to sleep once again.


Eventually one doe rose and slowly wandered up the hill and out of sight. The other lay there and soon began to ruminate; in cattle that’s often called “chewing their cud”. Mammals that ruminate include cattle, deer, sheep and antelope. They eat vegetation that’s high in cellulose, chewing only enough to swallow the leaves, twigs and other items. Once swallowed, the material goes into the rumen where it begins to ferment. Later, the material is regurgitated to be chewed again before it is once again swallowed to pass further into the digestive system. Here’s that doe ruminating –
The other rumination is, hopefully, what many of us do when we contemplate the world’s major problems or life’s major decisions (and some minor ones too). It’s what I do or have done in contemplating how some politicians can deny climate change in the face of obvious changes; when thinking about whether to retire or not; trying to decide on how much of a camera I really need and how much to spend on it; and on and on.

There was no snow on the ground or ice on the river, but the temperature had been in the mid-teens for several mornings and hadn’t been above freezing on those days. When the cold front that brought those temperatures came through it came with high winds.


The winds had whipped up waves on the river, many of which had been topped by whitecaps. Now, on a calm morning, I was walking along the river admiring the sculptures created by the wind, waves and chill.


Low hanging branches of riverside trees had been repeatedly washed by the wind-driven waves, building up ice formations on the dangling twigs. The ice sculptures presented a lot of photographic opportunities, here are some of them – 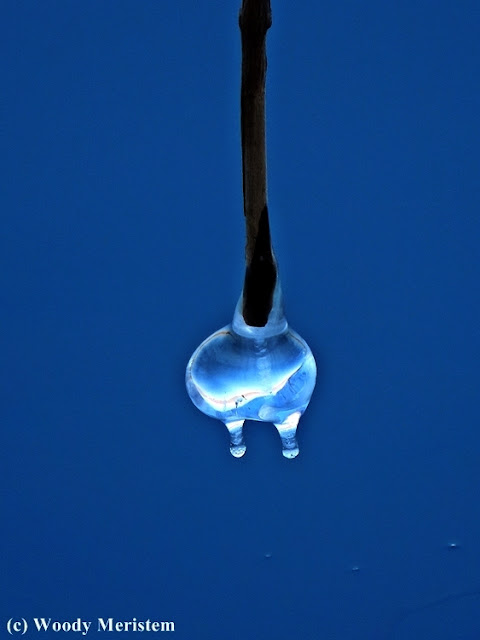 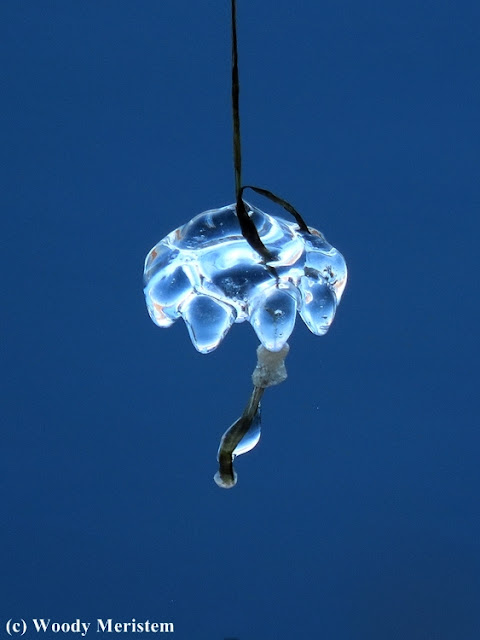 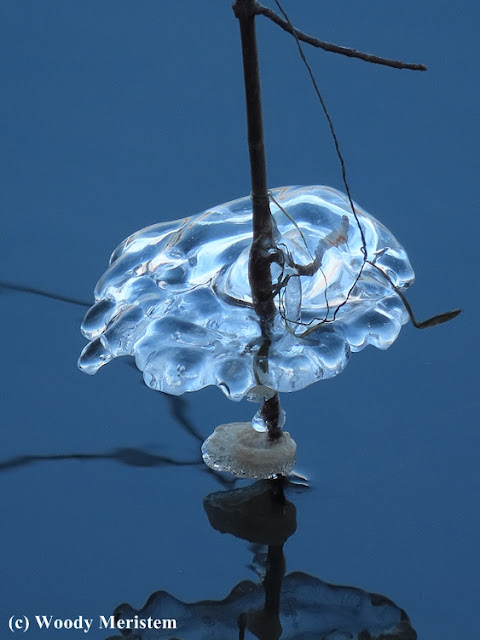 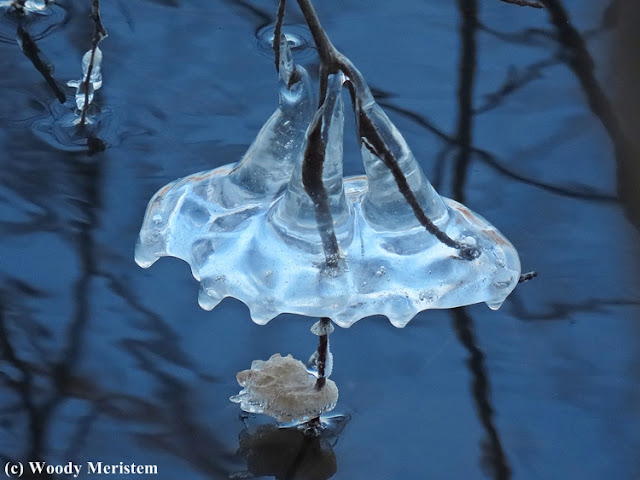 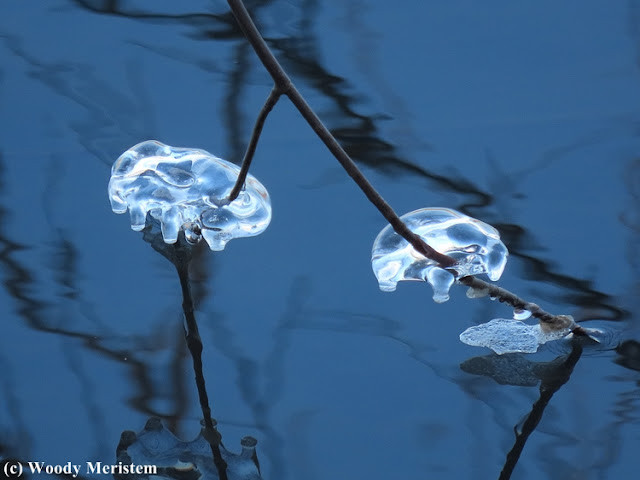 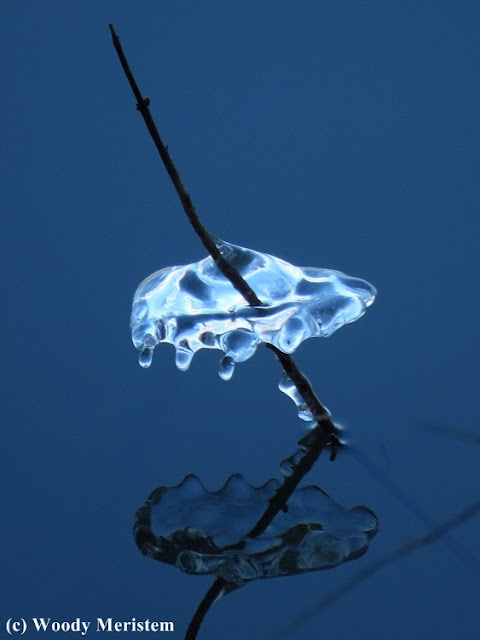 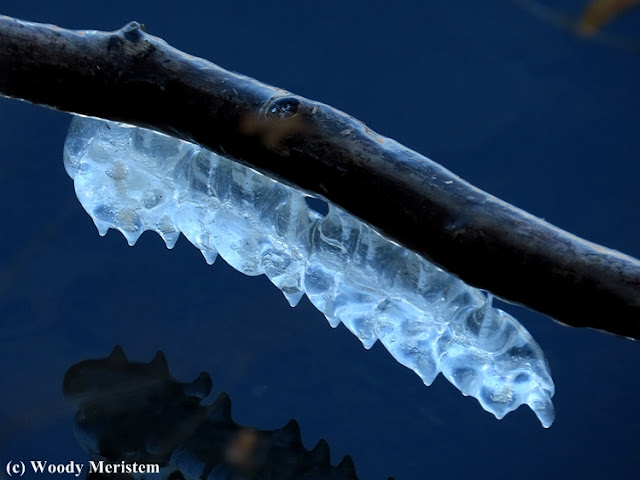 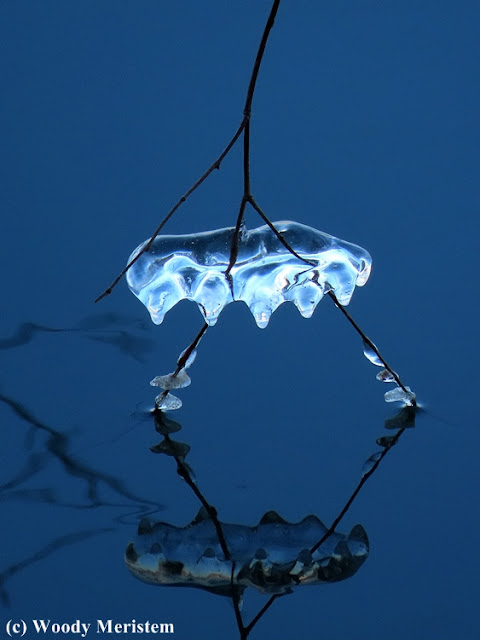 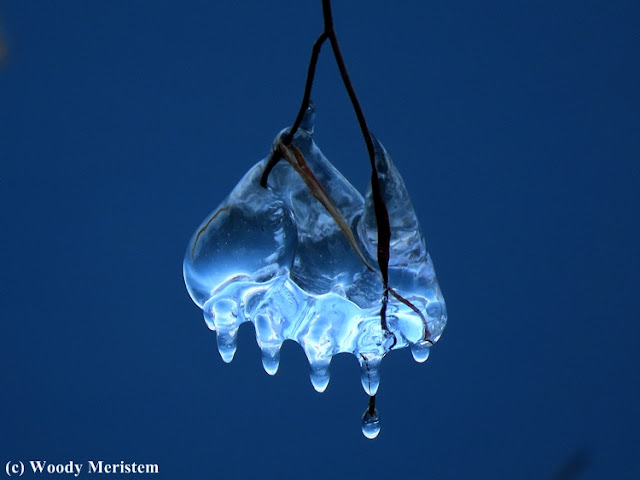 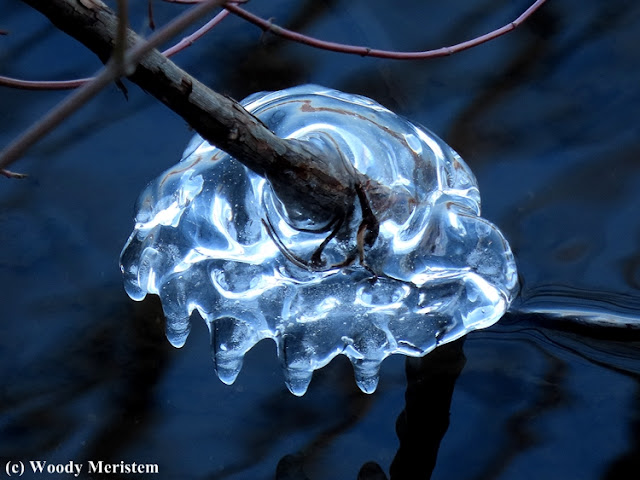 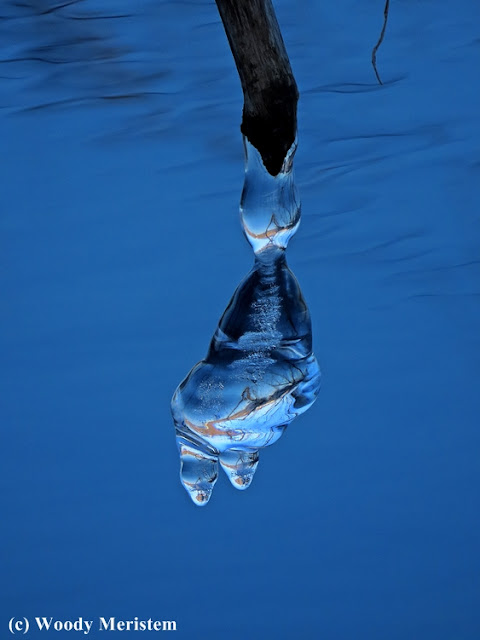 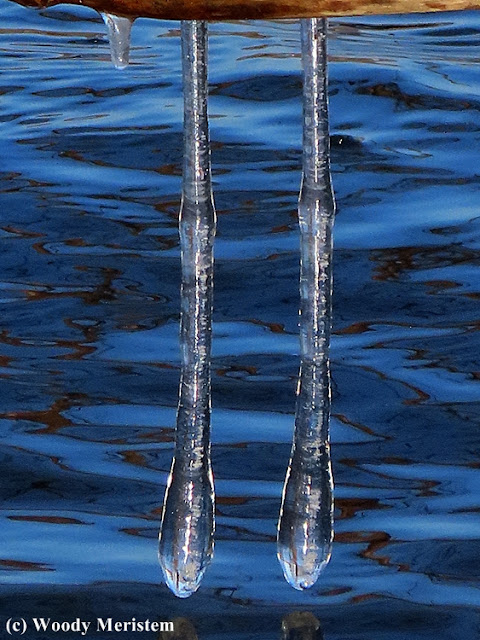 Warm weather was forecast for the next several days, and the beauty of the ice will have melted away.
Posted by Woody Meristem at 7:15 PM 6 comments: