During the last couple of weeks the fall colors of our rapidly changing leaves reached their peak. Of course, the peak varies with tree species and location, but each fall we're treated to a riot of color lasting several weeks.

Enough words, here are some of the best of this fall's colors - 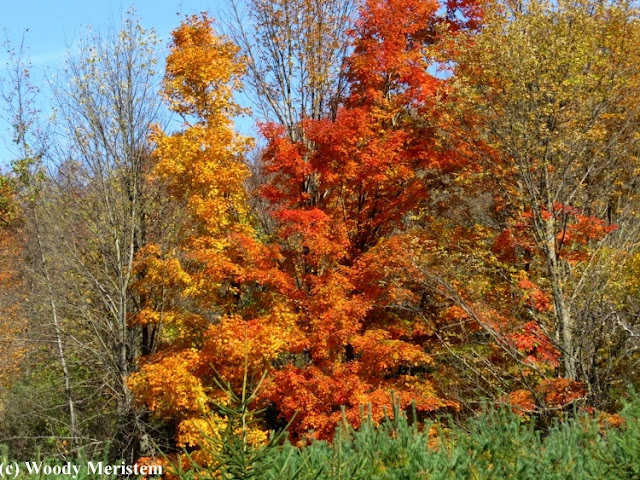 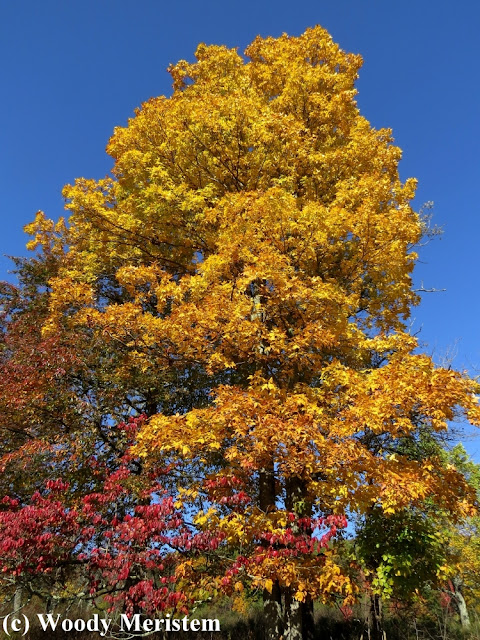 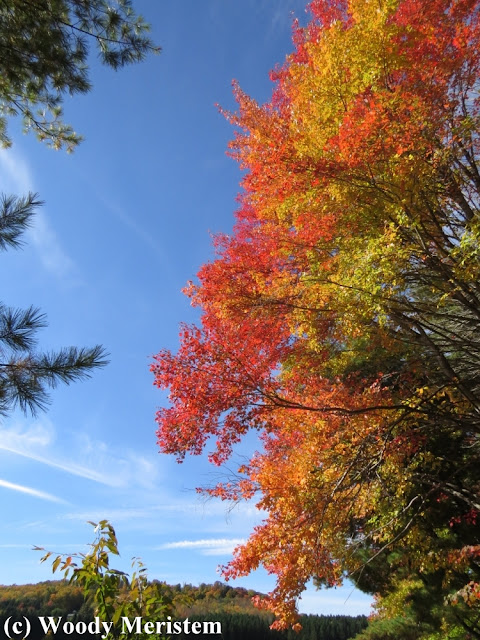 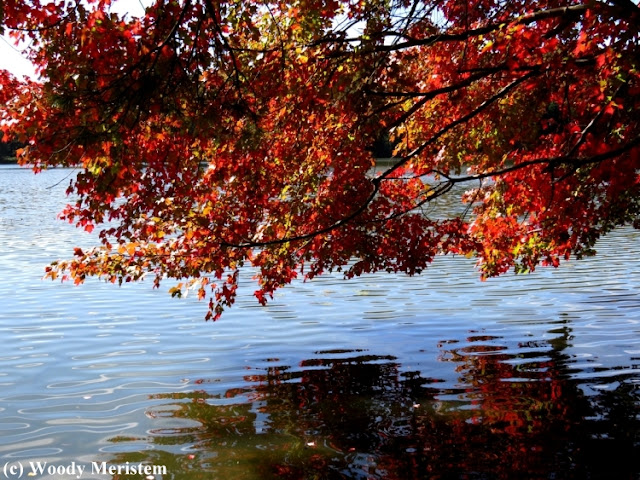 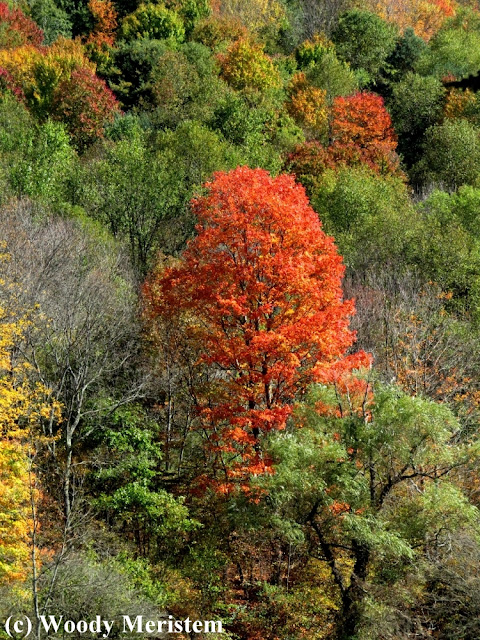 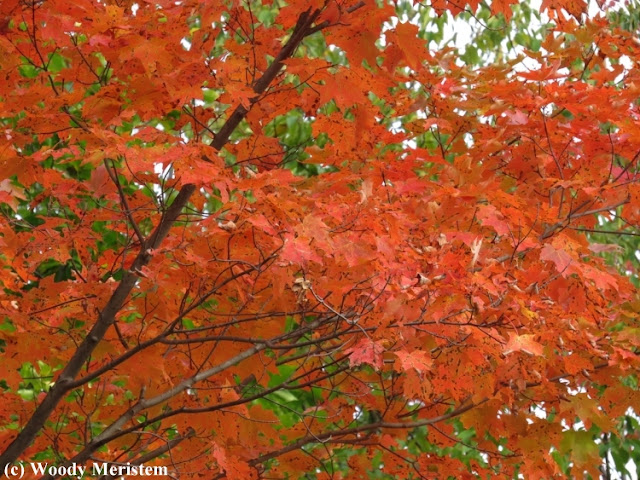 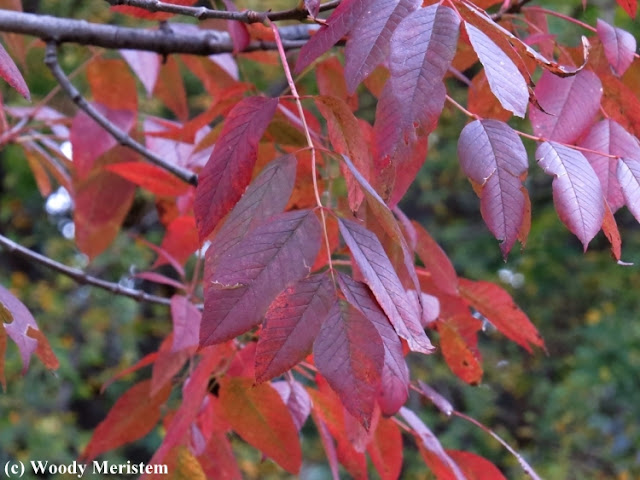 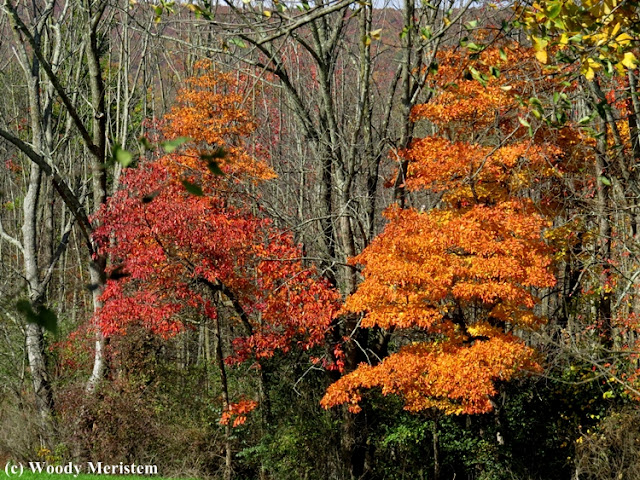 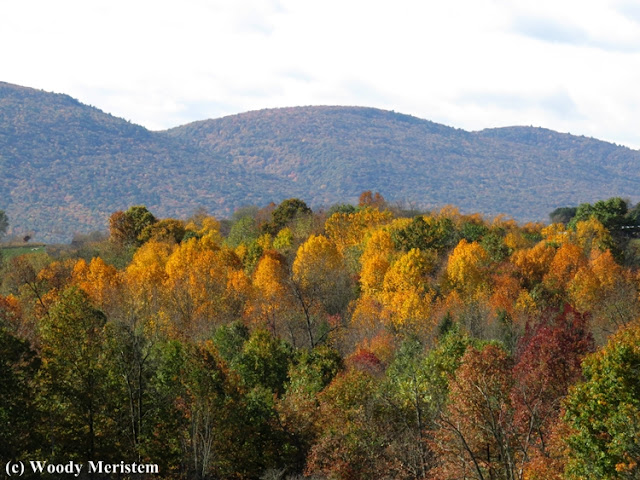 Now the various species of oaks are changing color; not as brilliant as the colors we've already seen, but still beautiful in a more restrained way. Then the fall colors will end, probably to be terminated by a storm bringing heavy rain and strong winds that strip the trees of their leaves.
Posted by Woody Meristem at 5:22 AM 2 comments:


Almost 50 years ago, not long after they were married, Bill and his wife bought a small hill farm of about 50 acres. The open fields are bordered on all four sides by woodland beyond which are number of new houses, some of which are on fairly large properties.

For over a year I’ve had a couple of camera traps at Bill’s place. Those cameras have captured photos of both red and gray fox, raccoons and opossums and skunks, gray squirrels, wild turkeys, eastern coyote, black bear and quite a few white-tailed deer.

Recently I put one of my camera traps underneath a large red oak in a fencerow between two old fields. That red oak had an abundant crop of acorns which began falling in late September.


Those acorns attracted quite a few deer to feed on the abundance; fawns and lots of does – 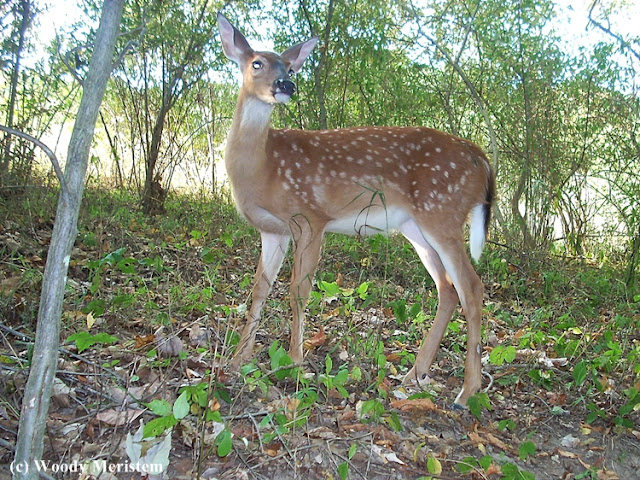 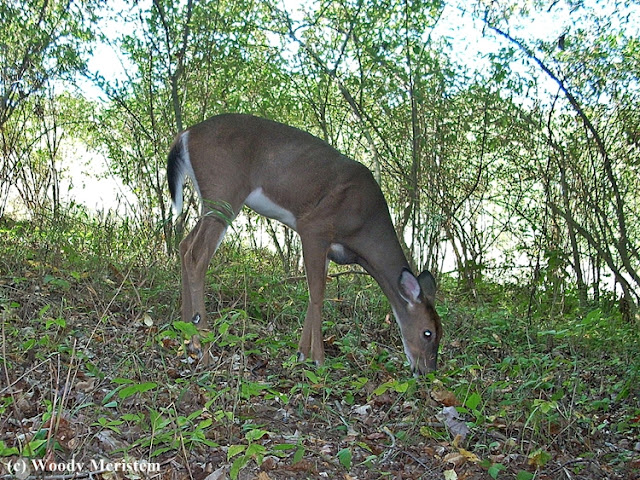 And bucks; in all there were six bucks that repeatedly came to feed. Here are Bill’s bucks – 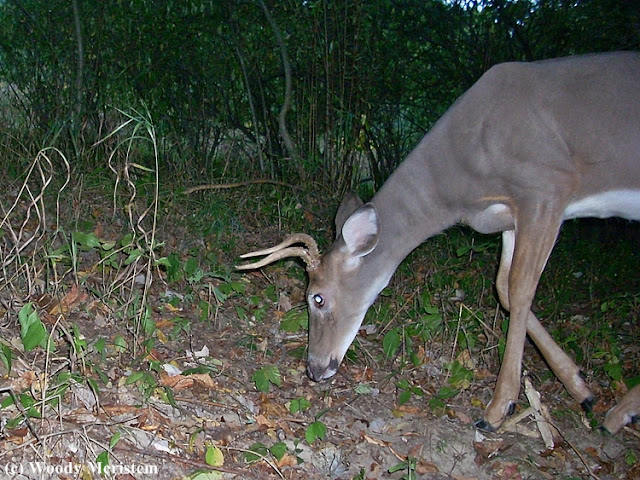 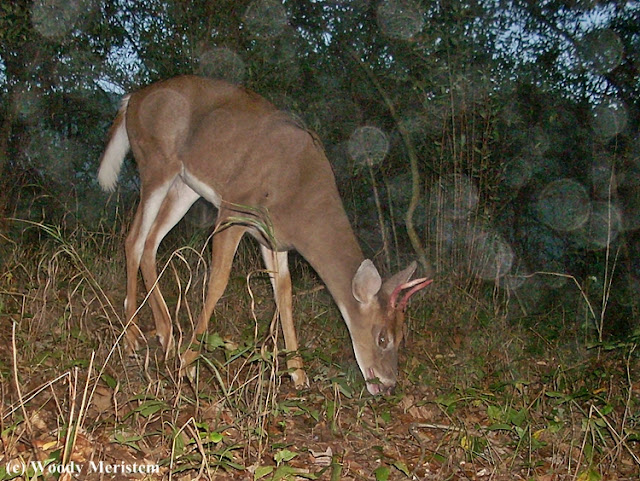 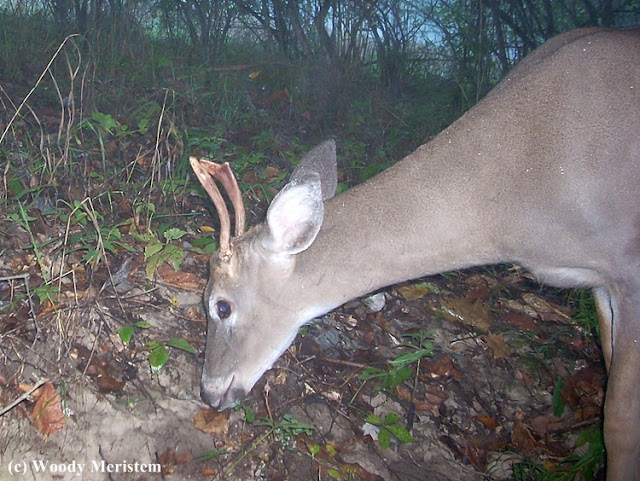 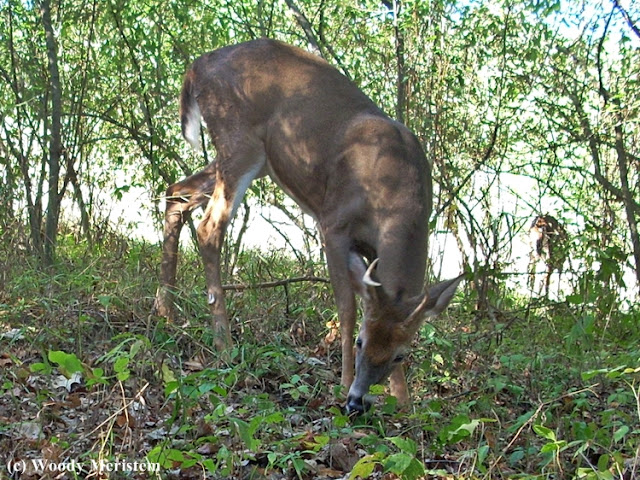 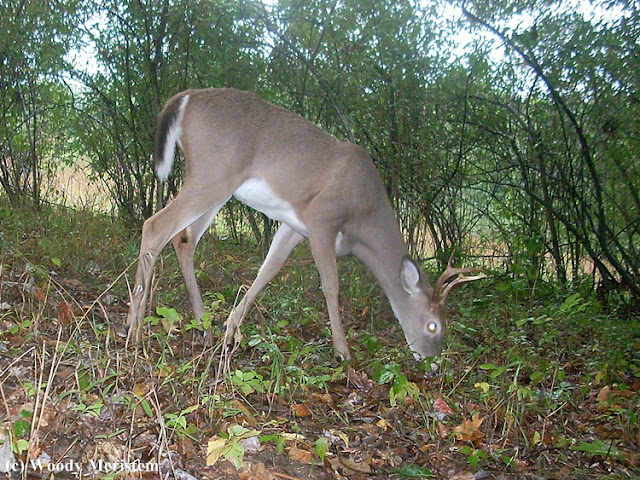 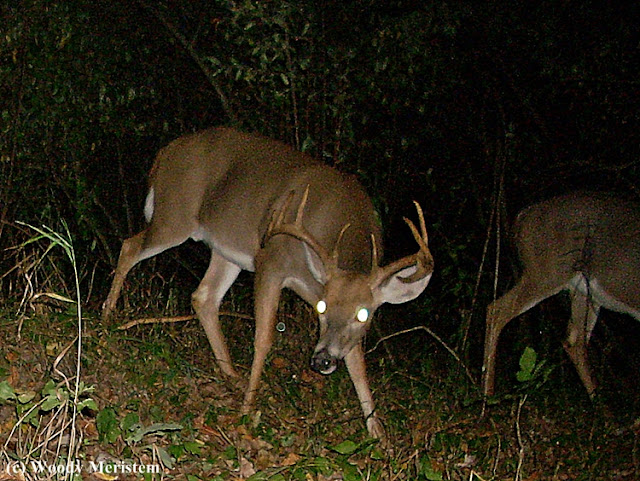 Bill doesn’t hunt, but he does allow a neighbor to hunt on their farm. Last year the neighbor never saw the large-antlered buck that one of the camera traps had photographed – it will be interesting to see what happens this year.
Posted by Woody Meristem at 4:26 AM 4 comments:


As the autumn progresses and the days grow shorter some folks suffer from SAD – seasonal affective disorder. SAD usually begins in the fall and lasts into the winter until the days become noticeably longer. Medically it’s described as a type of depression related to the change of season. Often depression has been described as “the blues”.

Not to make anybody sad, but soon our wildflowers will stop blooming for the year, the blue skies of summer will be replaced by November’s gray clouds and much open water will be frozen. But until then let’s look at some of the more pleasant autumnal blues. The blue sky of a beautiful fall day – 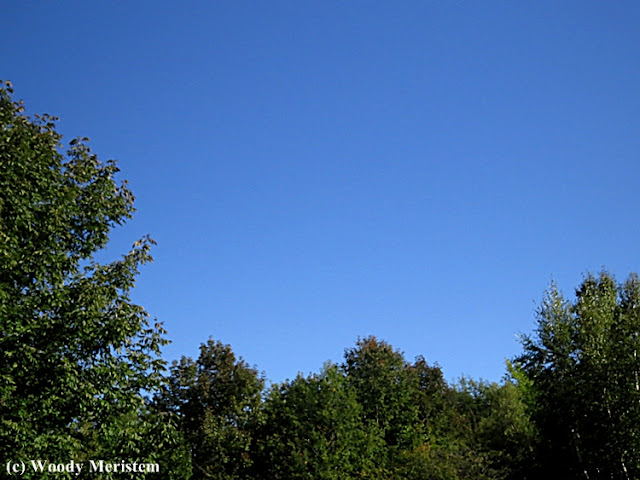 And its reflection on still water – 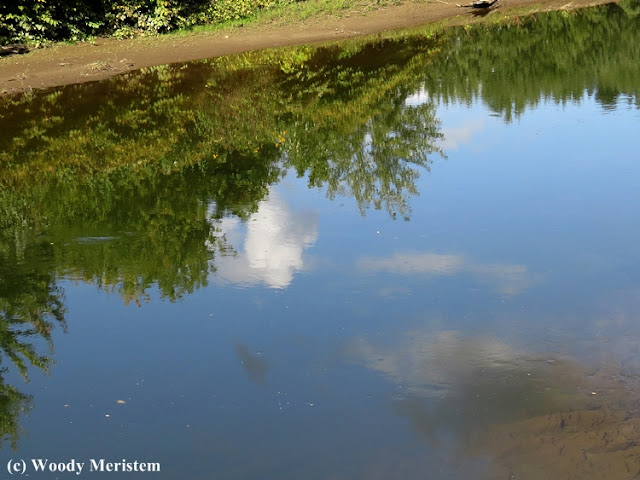 Many of the flowers of fall are blue: chicory – 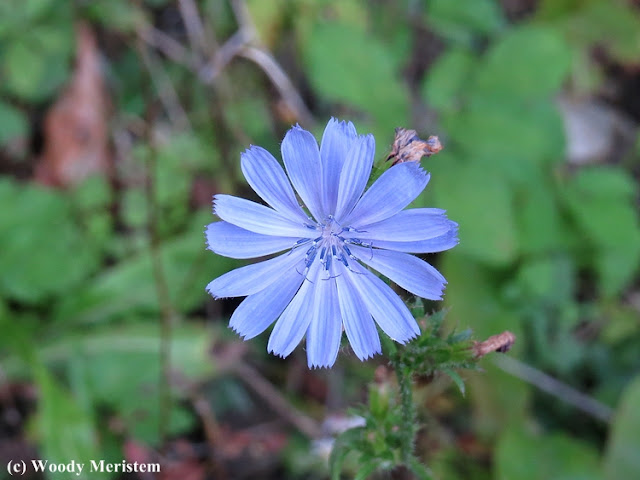 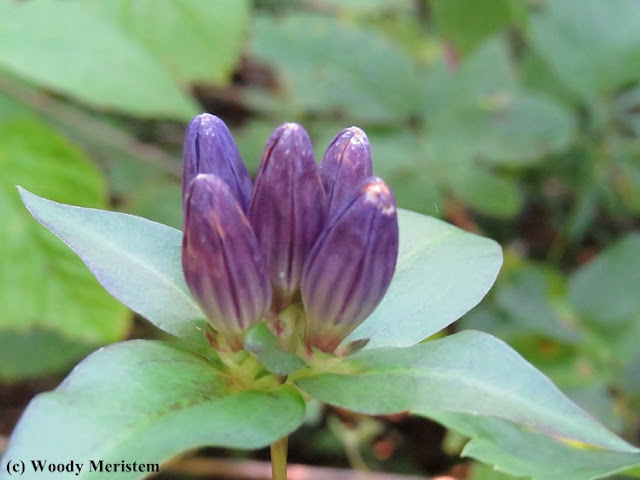 And many species of aster –


Great blue herons still hunt for frogs, fish and snakes along the streams; they’ll stay through winter as long as they can find open water – 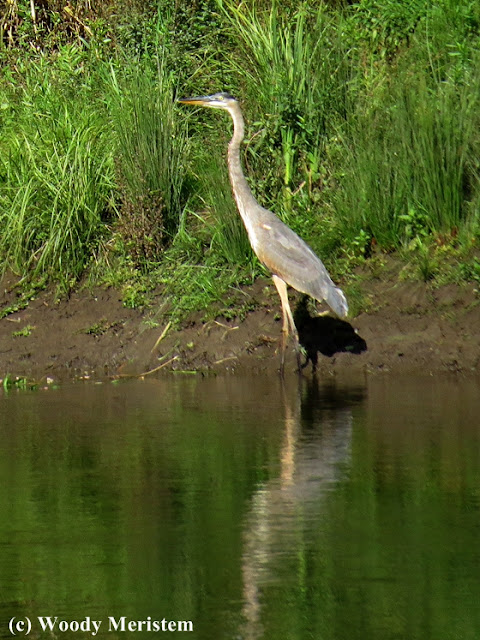 And there are wild grapes in the fencerows and woodlands, grapes that will feed wildlife – 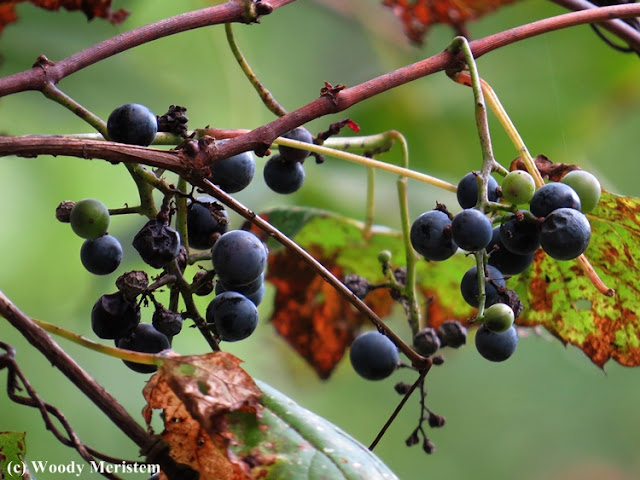 The beauty of these autumnal blues brings pleasure and beauty to the changing season and helps to lessen "the blues".
Posted by Woody Meristem at 8:56 AM 4 comments:


For several months one of my camera traps in the Big Woods has captured photos of a young buck with distinctive antlers. He’s now 18 months old, more or less equivalent to a teenager in human terms.

Throughout the summer and early fall he’s been hanging around with his mother and sibling. The camera trap has captured many, many photos of him – far too many to keep them all. 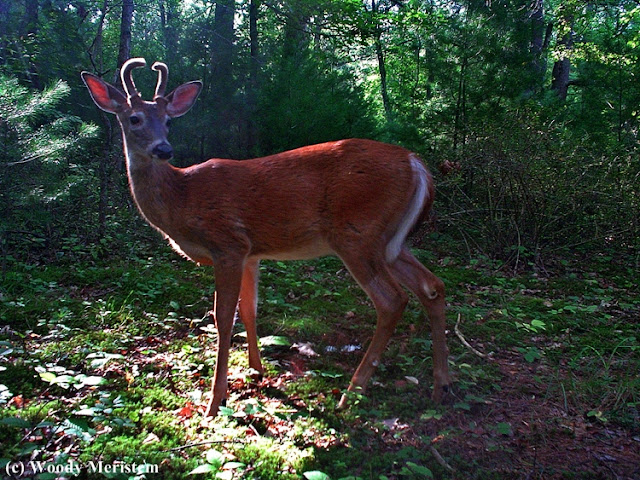 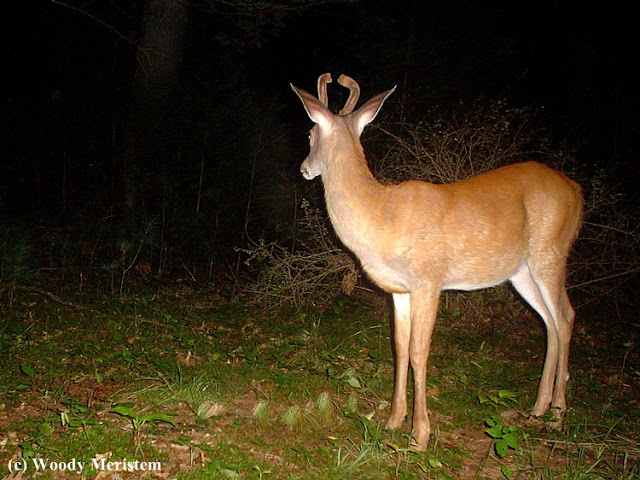 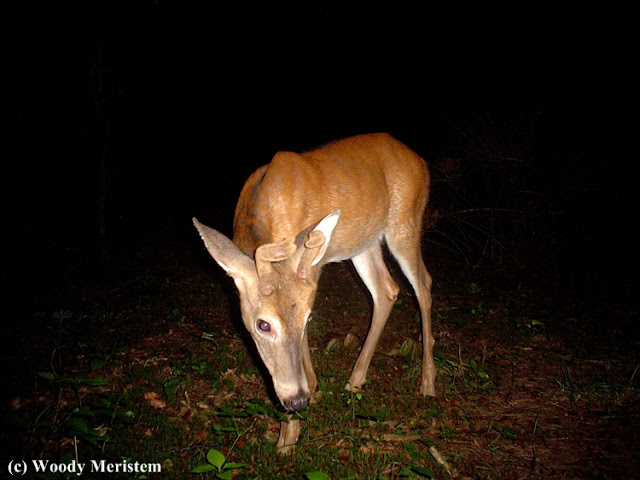 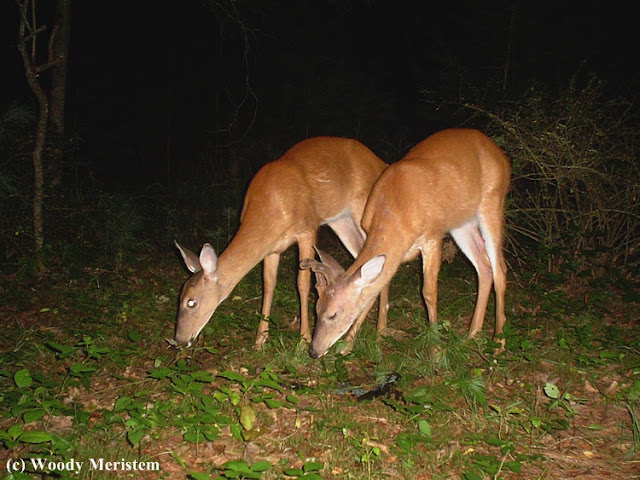 I’d never actually seen the young guy until one extremely cloudy morning not long after dawn when I walked along an old woods road. Movement to the side of the road caught my eye, and there he was – 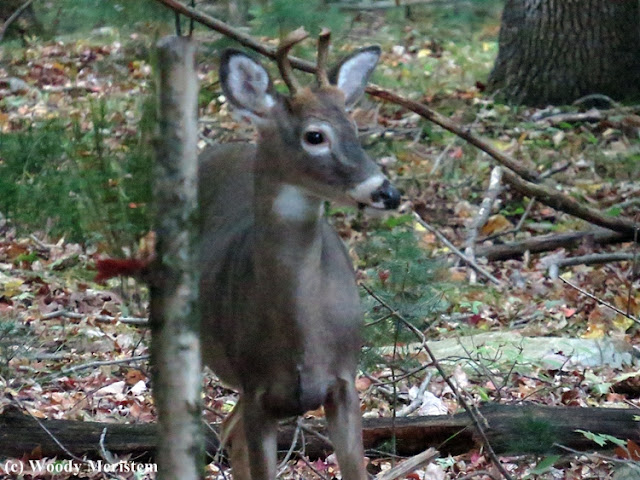 Just as he apparently was never frightened by the flash of the camera trap, he didn’t demonstrate any fear as I stood less than 100 feet away and photographed him.  Unfortunately, the light level was so low that the hand-held photos were taken at 1/25 of a second at an ISO of 6400 and so are of poor quality. 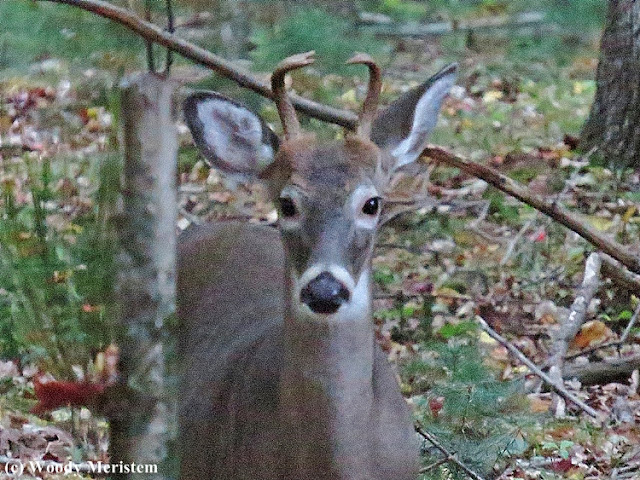 Young bucks normally leave their mother’s home range when they disperse to find a territory of their own, so I’ve probably gotten the last photos of him.
Posted by Woody Meristem at 6:34 PM 2 comments: