Hey Mom, Wait for Me!

By this time of year most species of wildlife have had their offspring. Some of those young ones are now old enough to face the world alone – squirrels and chipmunks and cottontail rabbits and great horned owls quickly come to mind. Some species are born later in the year or are dependent for a longer period.


In the last couple of weeks the camera traps above the house have gotten videos of some of those young animals and their mothers. The young ones followed their mothers around: to nurse when they were hungry; to gradually learn what foods are palatable; where to take shelter from storms (rain seems to have been unceasing lately); and, hopefully, how to stay away from danger.


Here are some of those videos: of spindly-legged fawns and black bear cubs –

Young ones  often have to hustle to keep up with their longer-legged mothers and the bear cubs were no exception.
Posted by Woody Meristem at 4:46 AM 7 comments:


Older posts (here and here) contained photographs and videos from camera traps at our son and daughter-in-law’s place far to the north. Recently we visited and I took the opportunity to check the cameras once again.


Although a couple of the cameras had only a few photos, others yielded much more of interest. There was still snow on the ground when this white-tailed deer passed the camera – 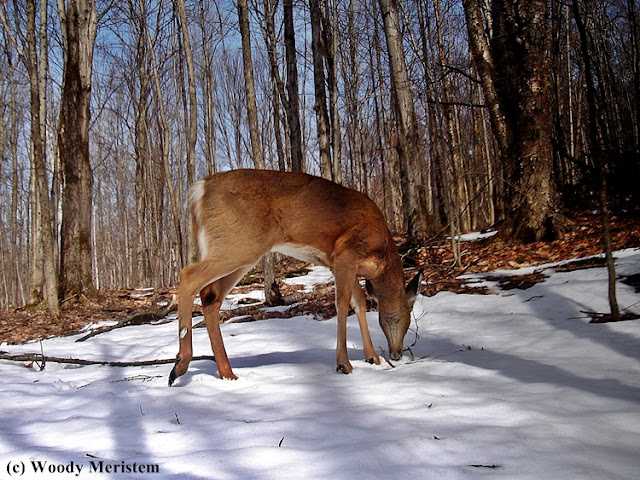 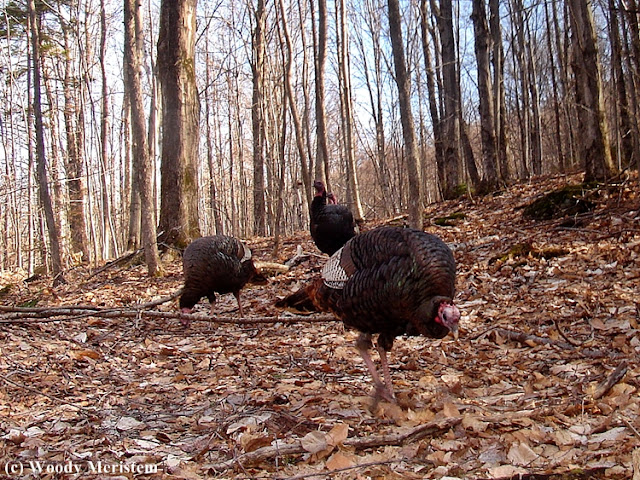 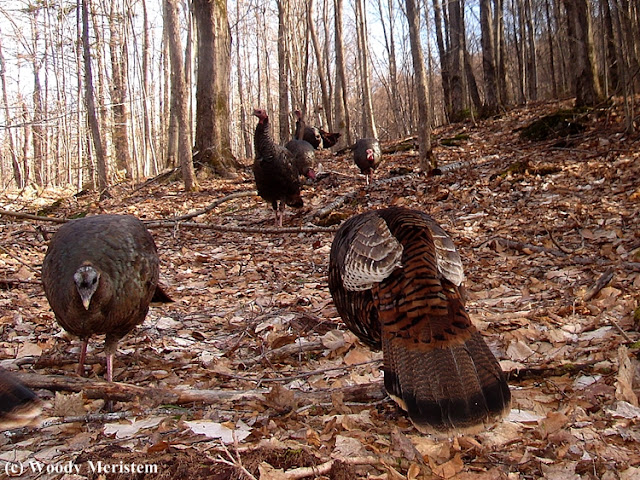 For two months a camera trap that takes videos had been further down the hill. It was set up to take videos along the length of a fallen log and the remaining stub of the dead tree from which the log had fallen. Here are the birds and mammals that appeared in those videos –

I’d also set a camera trap at the edge of their pond in hope of getting photos of the otter that shows up at the pond a couple of times a year. No otter this time, but a pair of mallards spent some time on the pond – 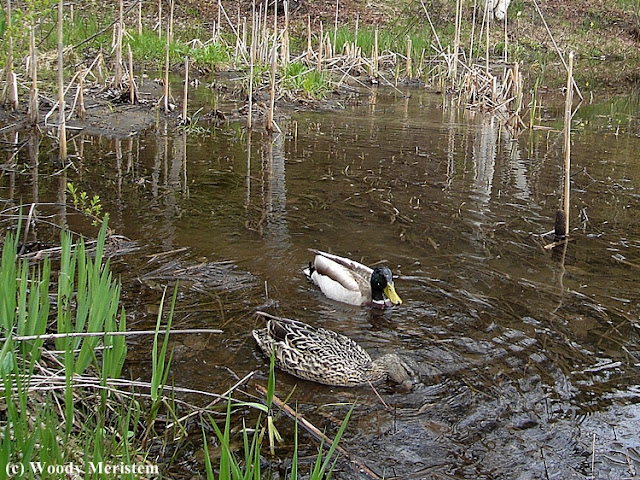 At other times wood ducks and black ducks have spent time there, however this time it was only mallards. 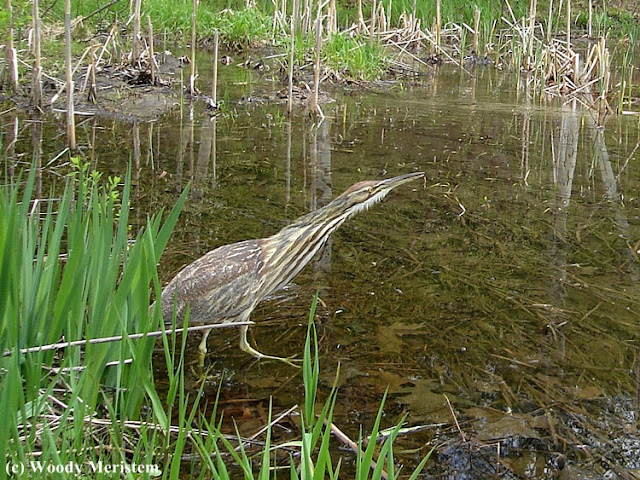 Their property borders thousands of acres of additional woodland so I never know what may appear in photos or videos from these camera traps.
Posted by Woody Meristem at 4:33 AM 4 comments:

The morning of May 30 was gray and soggy in the Big Woods following the 2 ½ inches of rain that had fallen in the previous few days; more was both threatening and forecast for the afternoon. In spite of the dripping leaves and the prospect of getting thoroughly soaked if a hard rain began, I was slowly walking along a trail through the woods.


I’d been looking at the view, such as it was, through the trees into the valley below when there was a faint whimpering sound from the other side of the trail. And there, less than 50 feet away stood a white-tail doe that I’d never noticed. She didn’t run as I stood looking at her and then I saw movement near her feet – it was a fawn, the first I’d seen in 2019.


The fawn staggered, on shaking legs, toward its mother as she turned to walk away. When the fawn drew near, the doe gave a gentle kick toward the fawn with her rear foot as if to say “Don’t follow me. Get Down!” 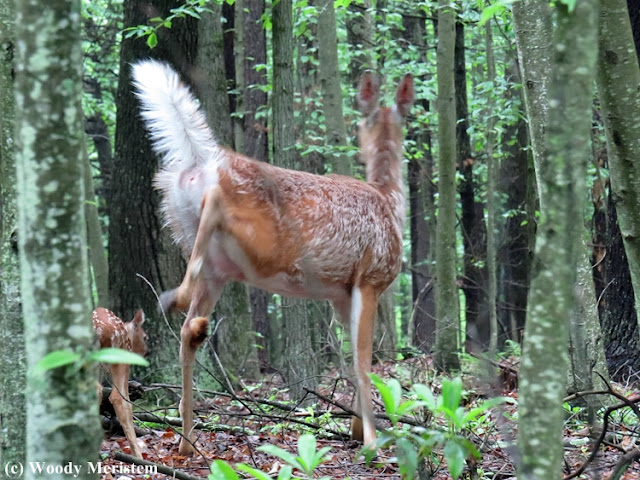 The doe took another step, the fawn made another wavering approach and received another gentle kick – 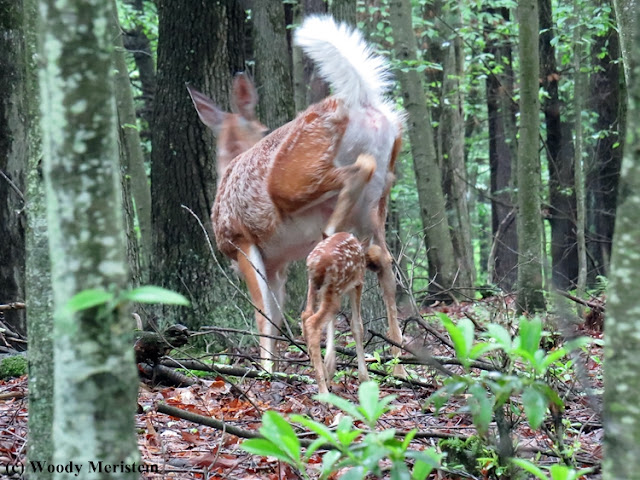 With that, the doe gave a snort and bounded away as the fawn crumpled to the ground. A fawn’s spotted coat is excellent camouflage; even from a mere 25 feet away it’s difficult to quickly pick out a fawn on the leaf-covered ground – 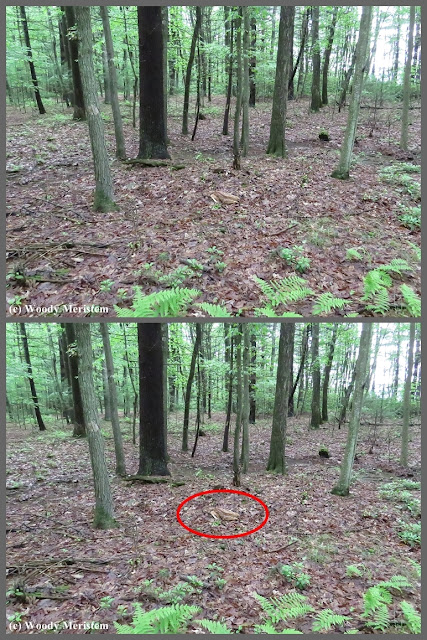 As fawns do, this fawn remained immobile as I slowly circled around it, taking photographs from a distance. That immobility is a defensive mechanism, for with those shaking legs young fawns couldn’t outrun even the slowest predator. 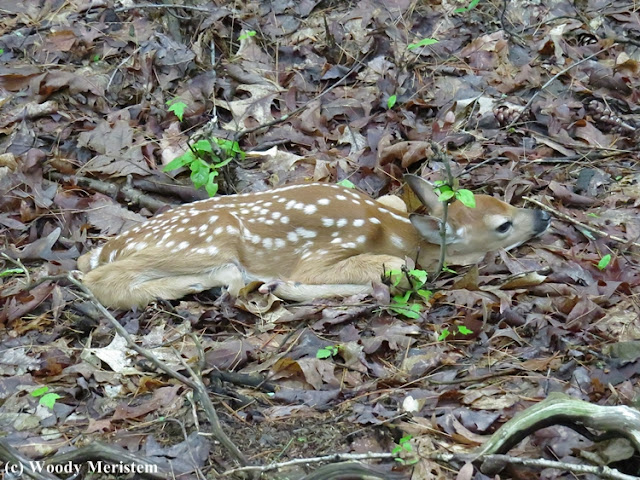 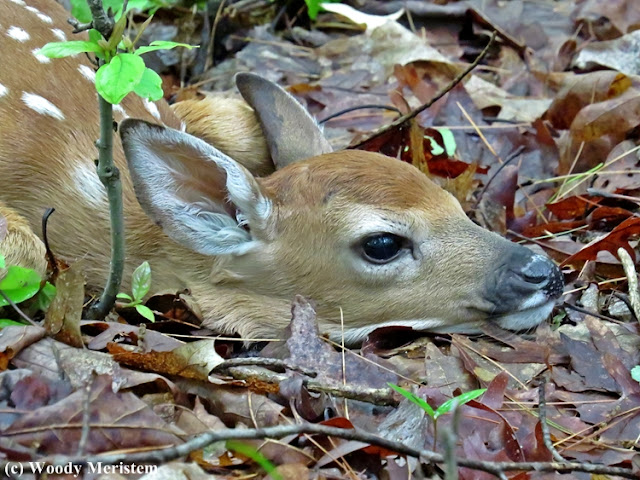 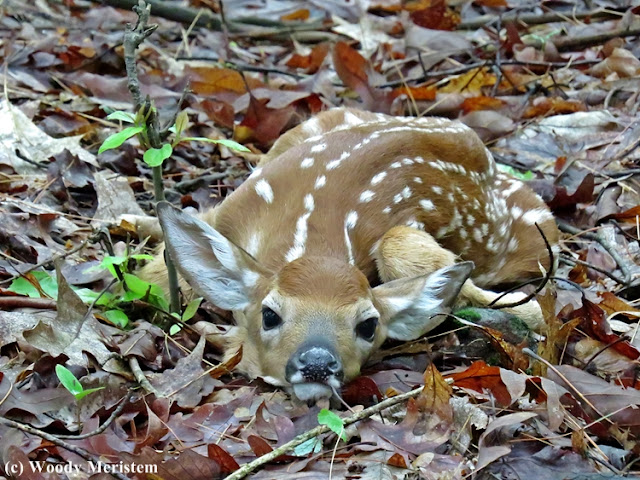 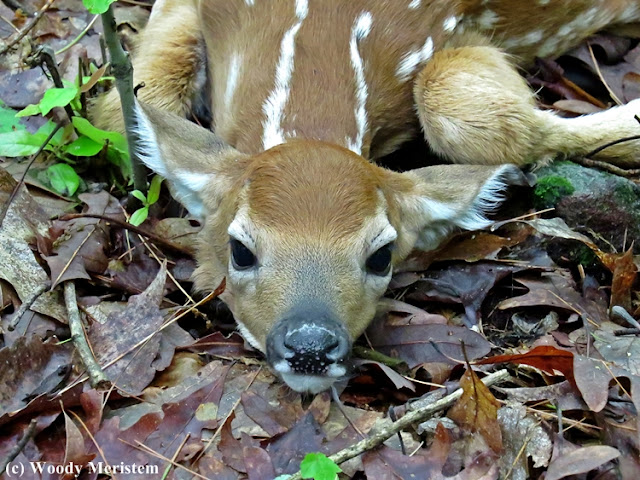 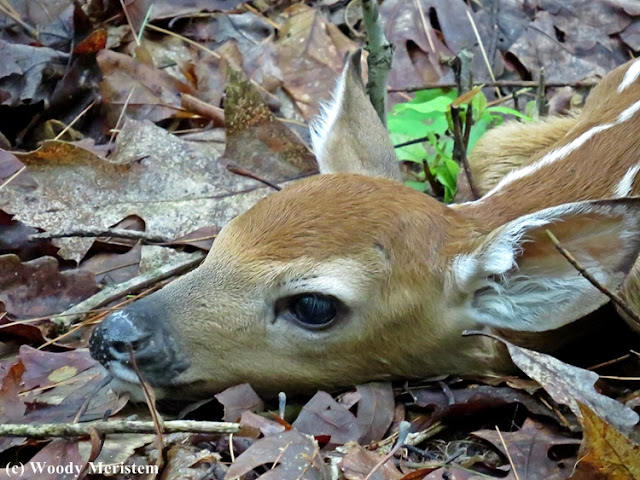 Although I’d initially thought the fawn might be a newborn, it was perfectly dry so it must have been at least a few hours old, perhaps as much as a day. In another day or two the fawn will be up and running whenever danger approaches.

Two hours later, as I made my way back to the car, the fawn was gone; the doe had returned to move her young one.

Posted by Woody Meristem at 4:41 AM 7 comments: