Spring Is in the Air

Four days ago it was 17° F at the house when dawn broke. In the Big Woods most of the snow has melted, but there are spots in the deep hollows and narrow valleys where snow and ice still lays in cool shady spots. Nonetheless, spring is in the air. April showers have arrived a bit early, with light rain on Thursday and again this afternoon and a temperature in the 50s yesterday. When I left the house this morning a Carolina wren was singing in the oak tree in the yard. 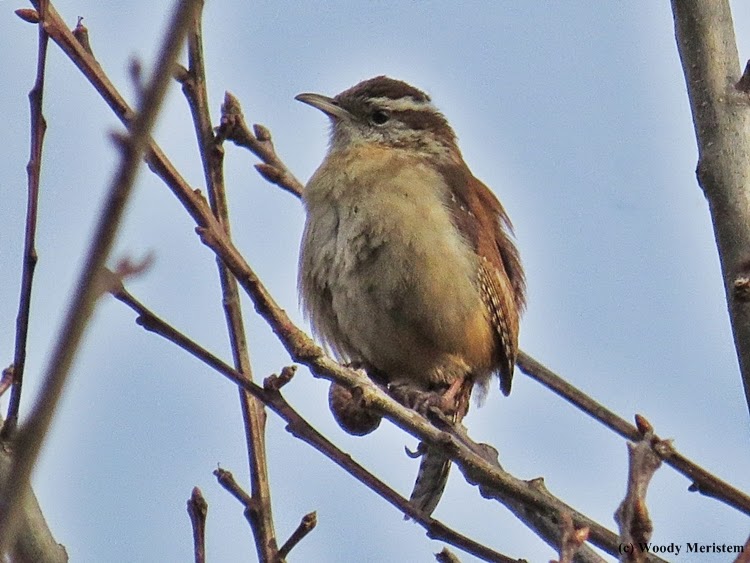 Heading for the Big Woods this morning, I passed a field where a small flock of wild turkeys were reacting to the lengthening days. All five toms in the flock were in full display, three of them within pecking distance of each other. 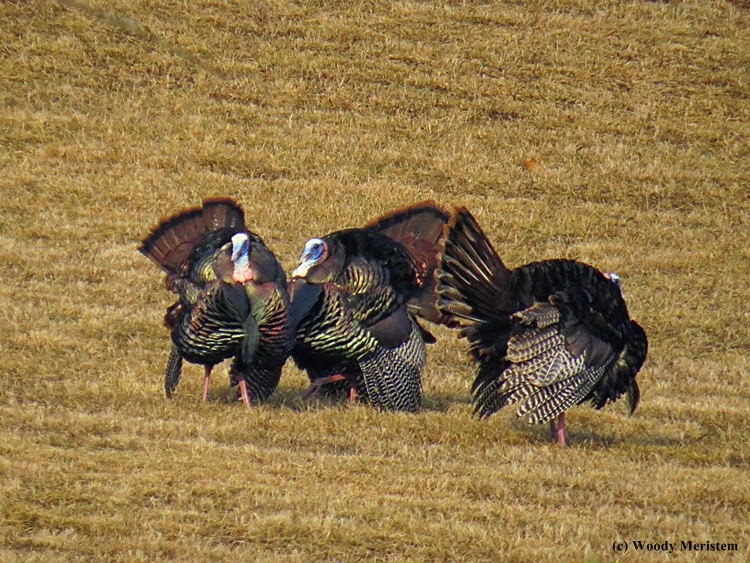 There was an occasional gobble from yet another tom that was out of sight in the woods, but I never saw one of the displaying birds respond. The hens in the field didn’t seem to pay any attention to the displaying males strutting around. 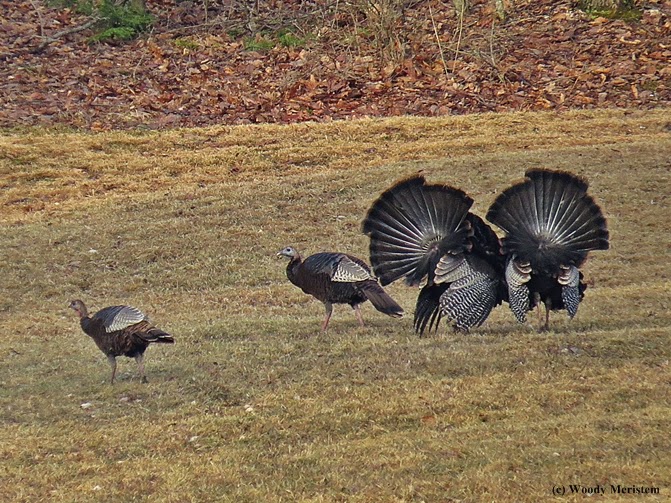 The colors shown by the males are truly striking, varying with their orientation to the sun. 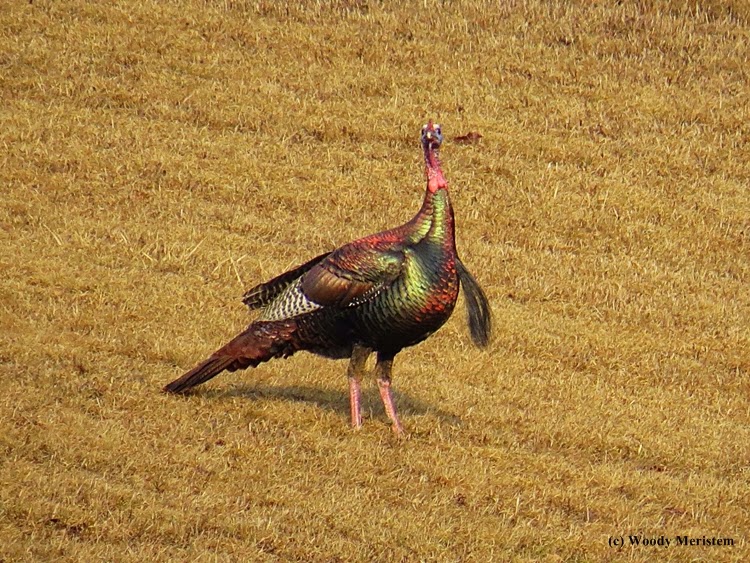 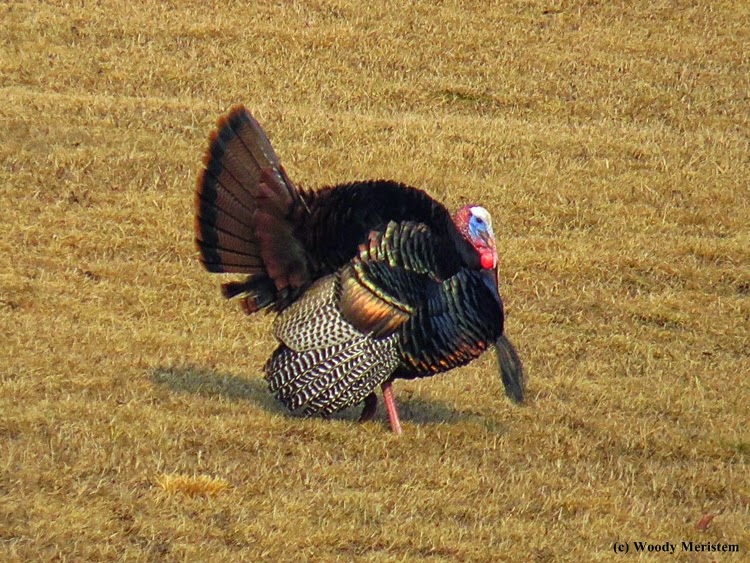 After 60 years, I still remember my first sighting of wild turkeys as my father and I drove to town; they were also the first he’d ever seen. The wild turkey has been a wildlife management success story. For all practical purposes turkeys were extirpated from much of the northeast by 1900. Many states tried to reintroduce wild turkeys using pen-raised birds, but these efforts were an abject failure – birds that could survive in a pen were unable to survive in the wild. In 1936 the Pennsylvania Game Commission attempted to improve its success by penning hens in ten-acre enclosures in the few areas where wild populations remained. Wild toms could fly into the enclosures to mate with the hens; eggs were collected and the poults reared and released. Years ago, in a remote area of the Big Woods along a small stream I found the remains of one of the pens: chestnut posts and rusty woven wire fencing.
Turkeys are back in all of their historic range no thanks to the release of pen-raised birds, but because trap and transfer of wild birds and restrictions on hunting resulted in expansion of populations.
Posted by Woody Meristem at 7:14 PM No comments:

Walked in the Big Woods on a pretty morning as a gentle breeze rocked the treetops. High above, the clouds were being pushed rapidly eastward by a wind out of the west-northwest. Below the clouds a steady stream of Canada geese headed north at a very rapid rate – from the speed at which they were traveling, the wind at that elevation must have been from almost due south. Along with the flocks of geese were several flocks of northbound tundra swans. The swans’ calls always seem particularly haunting, speaking of far away places that few of us will ever see. 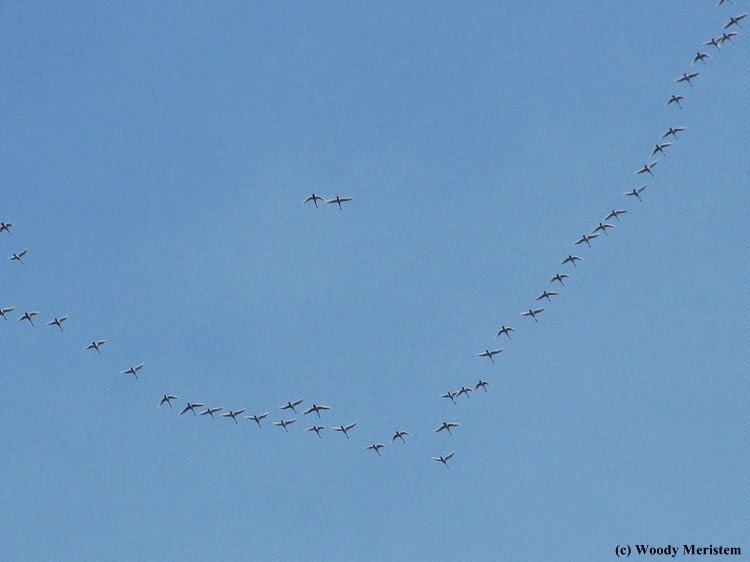 Several days ago I went to State Game Land #252, created from the old Pennsylvania Ordinance Works where TNT was manufactured for a short time during World War II. Of the roughly 8,000 acres taken for the Ordinance Works, roughly half was eventually transferred to the Pennsylvania Game Commission and became SGL #252, where the flat terrain and poorly drained soils facilitated construction of a number of wetlands. I had gone to the Game Land earlier this week expecting to find a lot of migrating waterfowl in the wetlands, but with one exception they were still covered with solid ice. There the sounds of waterfowl came from behind some thick vegetation, the birds out of sight until they flushed – pintails along with one black duck. 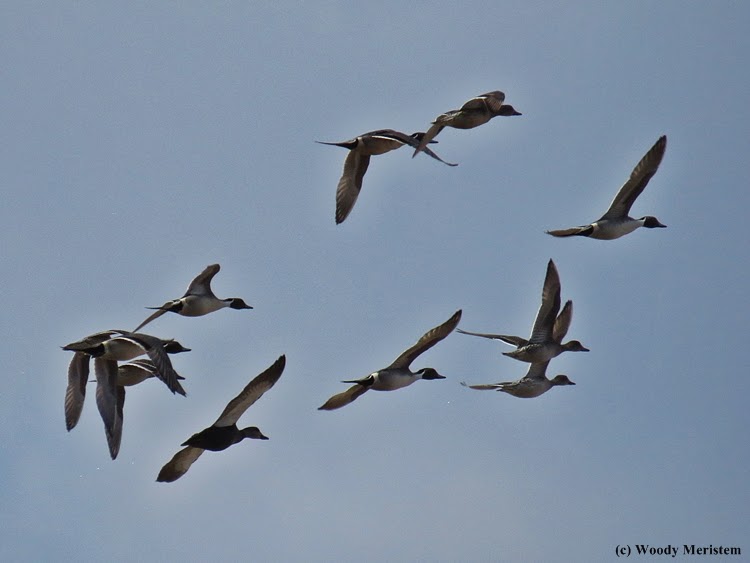 The next day on the river there were more waterfowl: Red-breasted mergansers 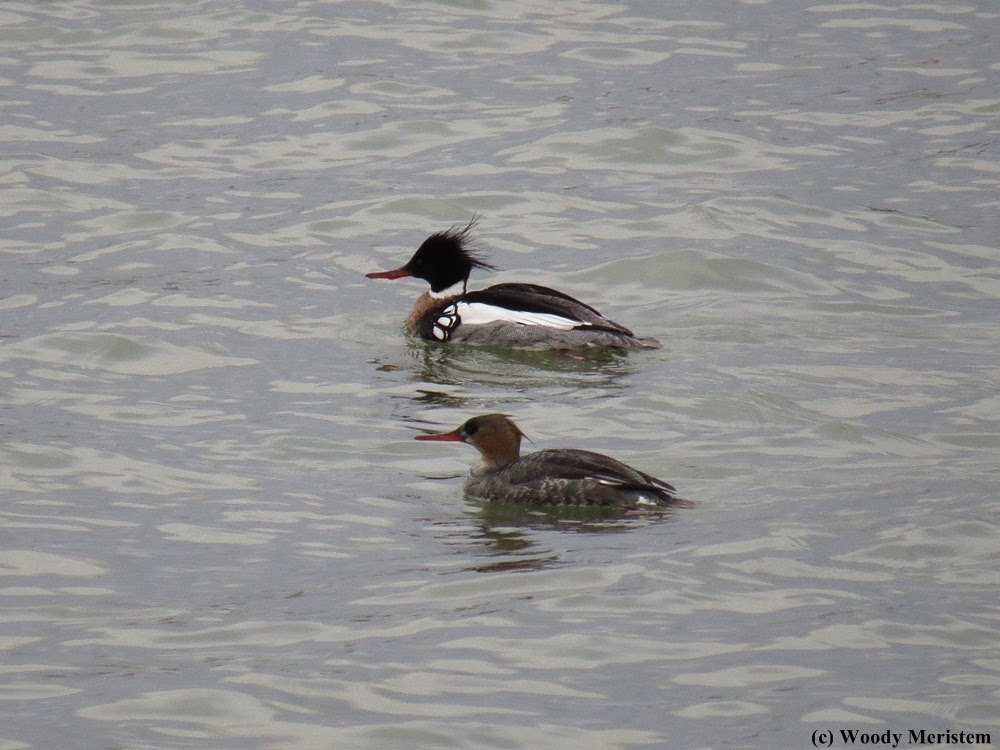 Including one pair that was fairly close to shore – 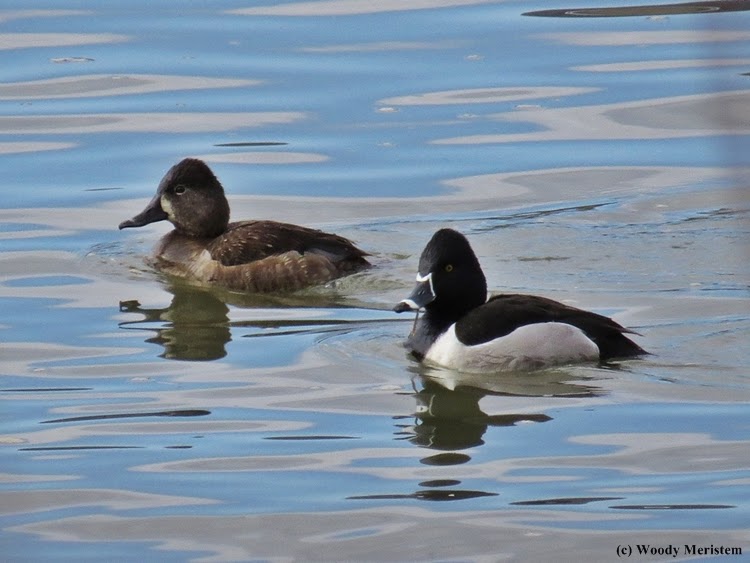 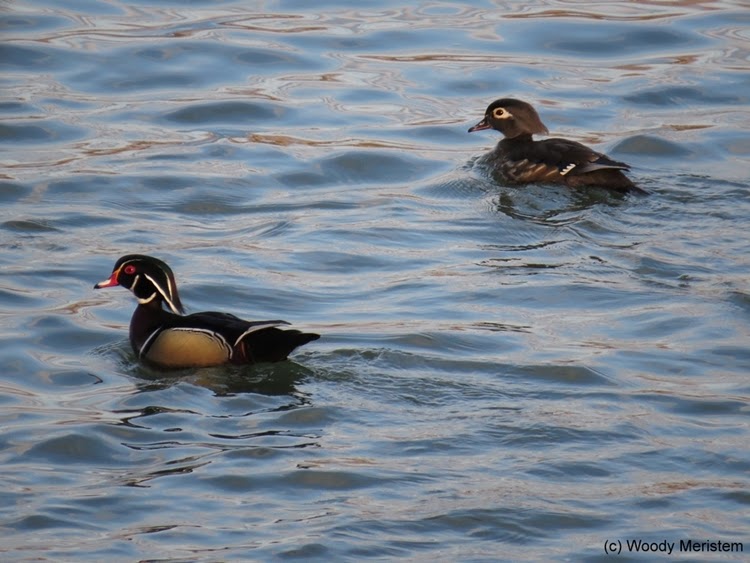 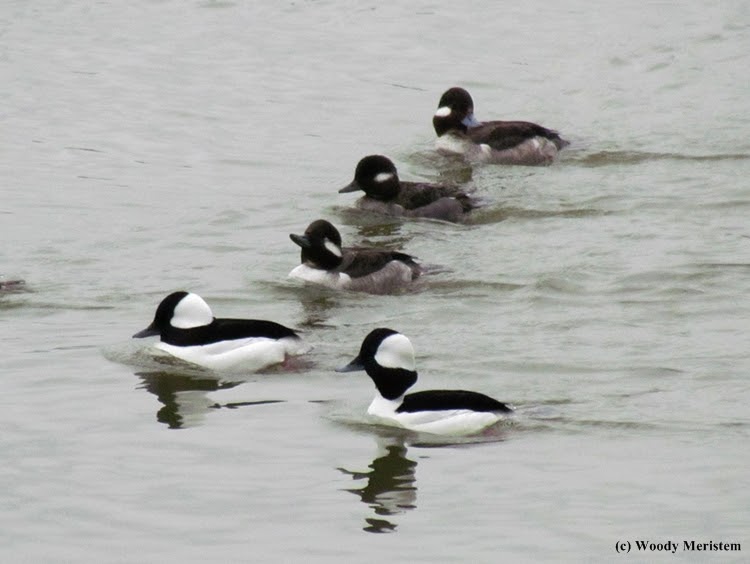 And lesser scaup accompanied by a horned grebe – 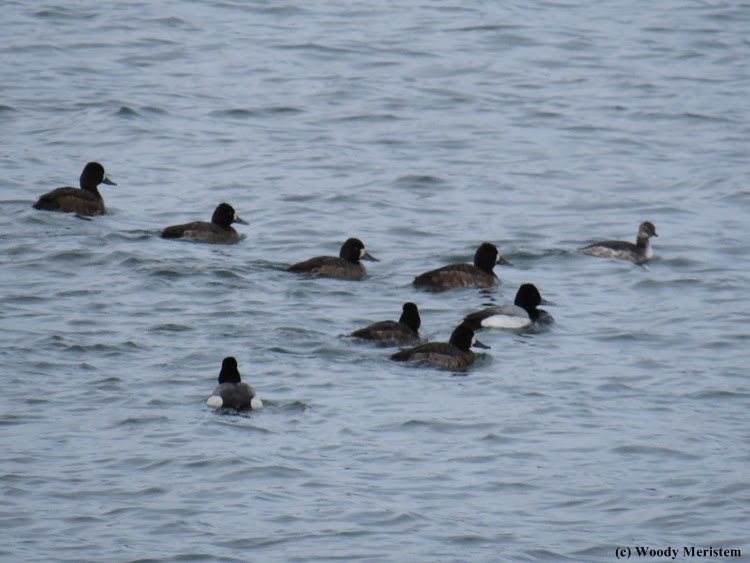 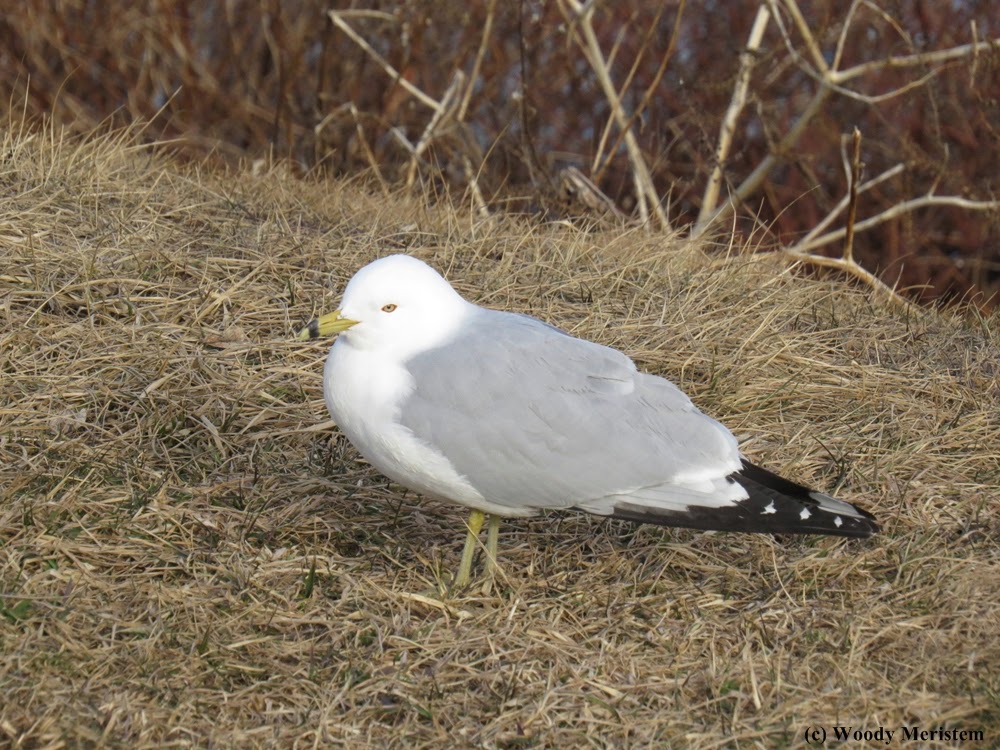 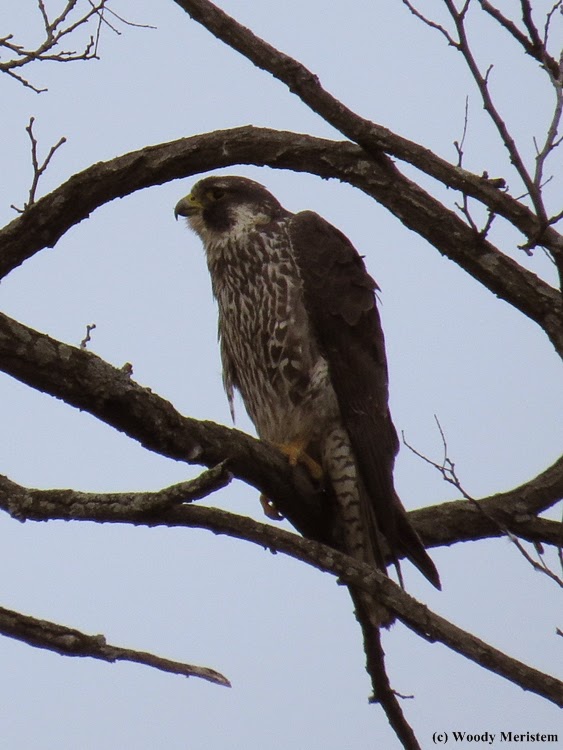 In a riverside tree, the same tree in which the local breeding pair of peregrine falcons has frequently been seen, was an immature peregrine – One fledged from the nearest nest, or a wandering bird looking to establish its own territory? And, is there something particular about that tree that makes it particularly attractive to the falcons?

Posted by Woody Meristem at 11:20 AM No comments:

For the past few weeks the river, except for fast water sections, has been frozen bank to bank. It’s been a number of years since that much ice has formed on the river. But then, on Wednesday, rain fell heavily for several hours putting about ¾ inch on the ground – a warm rain that melted over a foot of snow at the house. Upstream areas also received heavy rain and lost a lot of snow.
The rapid inflow of runoff raised the river by over eight feet, breaking up the solid sheets of ice and carrying them downstream. At the same time, ice from upriver came our way, so for many hours the river was still ice covered – but the ice was not in solid stationary sheets. Instead it was in a mass of churning pieces, constantly on the move headed downstream. For most of Thursday ice flowed constantly, until late in the afternoon there was open water on the north side with mini-icebergs flowing past. 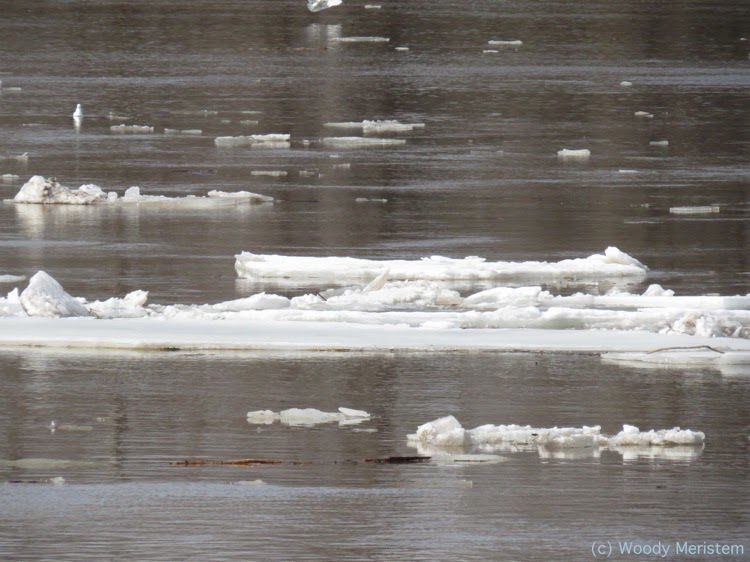 Yesterday, as I walked along the river there was still a bit of ice flowing past, just the remnants of the large masses that had been there 24 hours before. With the open water there was a large flight of ring-billed gulls, headed upstream on their way to the Great Lakes. Some of the gulls rode the chunks of ice for a while, before taking off to continue their upstream journey. 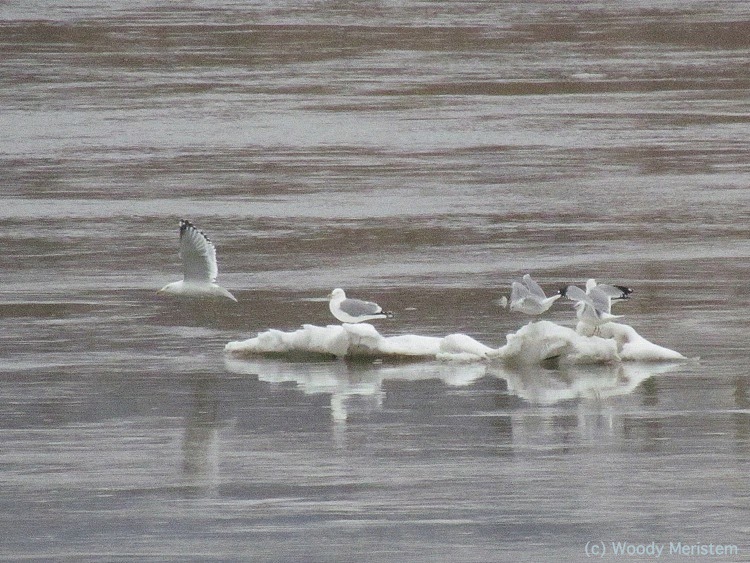 Apparently also arriving as the ice left were some male canvasbacks that stayed just beyond the narrow strip of ice that was still moored to the bank. Were they the same birds that had been on the river at the end of February, or had those birds moved on and been replaced by more recent migrants? 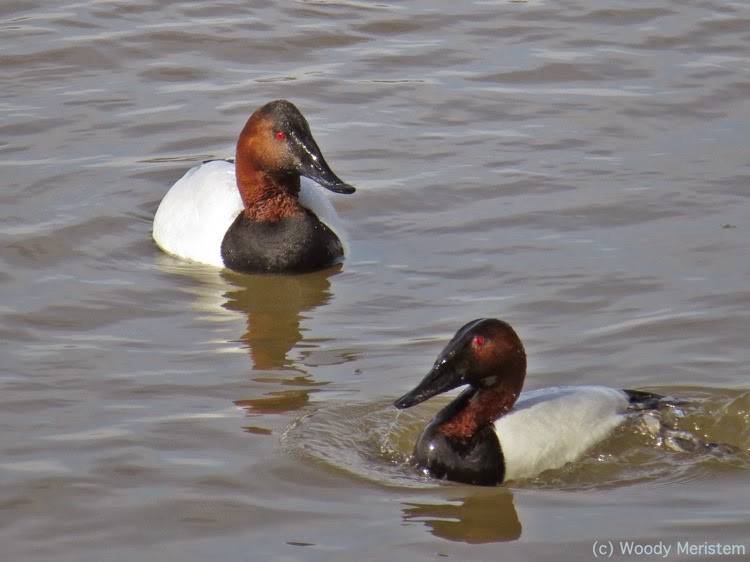 Not far from the canvasbacks a muskrat had climbed out of the water onto the shore ice and spent quite some time grooming its fur. 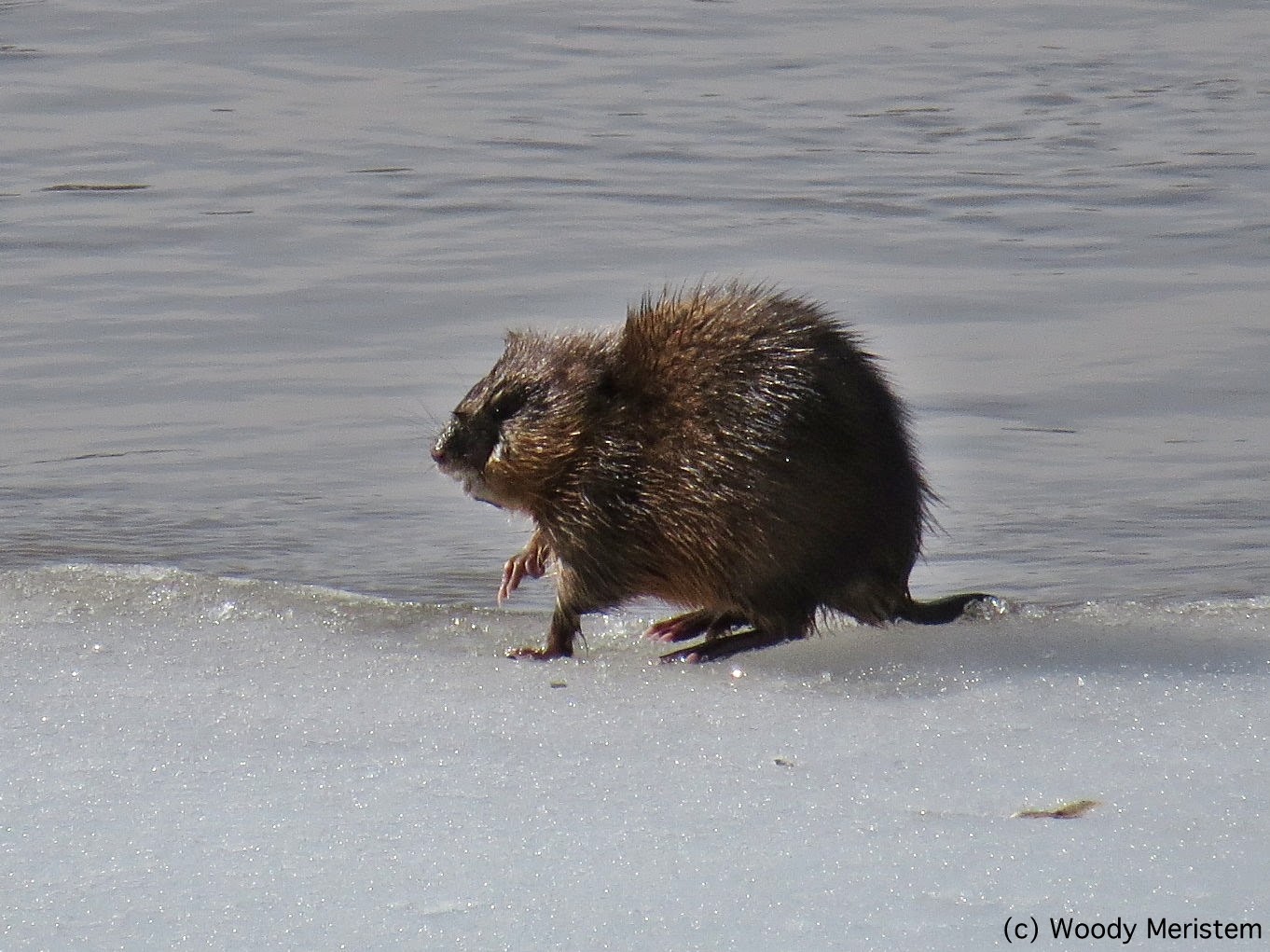 This morning there was a stiff northwest wind - high above the house flocks of Canada geese were heading north. These weren’t resident birds that had wintered on the small areas of open water, they were long distance migrants flying high and having difficulty holding formation as they flew into the wind. 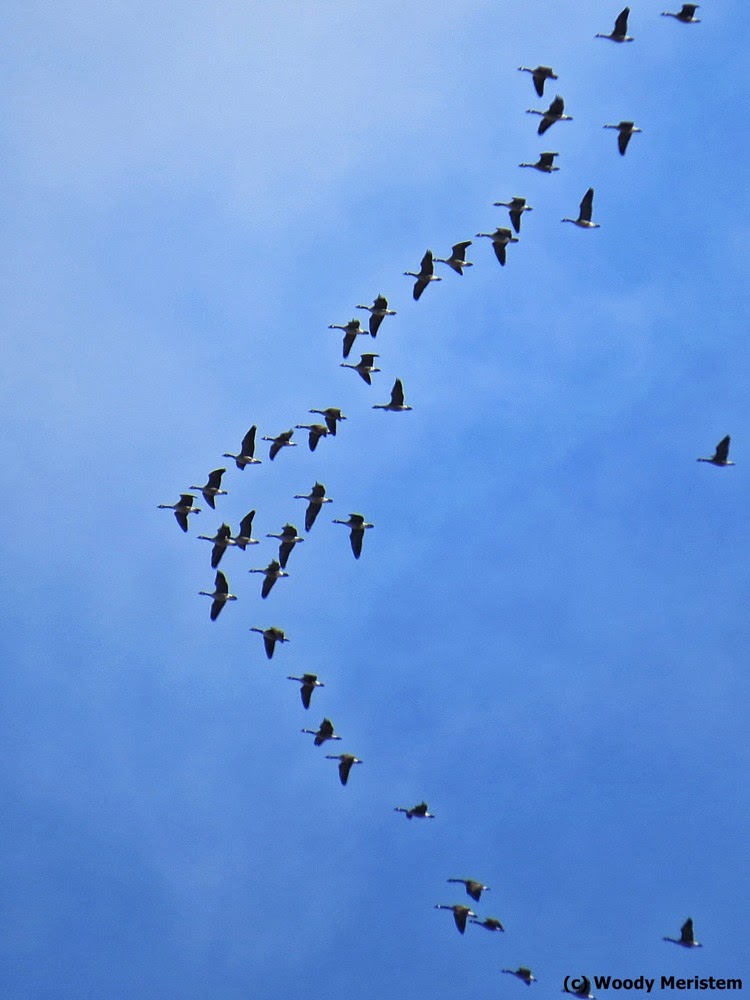 Posted by Woody Meristem at 10:23 AM No comments:

At times it appears that some of Pennsylvania’s legislators – too often even a majority – just can’t pass up a chance to demonstrate how little they know or care about natural resources. Just two examples from the past few months –
The “Endangered Species Coordination Act” (House Bill 1576 and Senate Bill 1047) which would require all species of plants, birds, mammals, reptiles, amphibians, mollusks, and insects now on the state list of rare, threatened or endangered species to be re-listed within two years or loose their designation. In addition the re-listings would have to go through a lengthy regulatory review process by an agency with no expertise in any biological science, and subject to the political machinations of the legislature.
Hundreds of species of concern, but not yet rare, threatened or endangered, would immediately be eliminated from any consideration in permit applications for mining, drilling or construction. Those are species that are rare in Pennsylvania, but may be more common elsewhere. Protecting uncommon species in the states is an excellent way to prevent them from becoming listed under the Federal Endangered Species Act. But the proposed legislation would appear to protect only those species already on the Federal list.
Another ridiculous provision of the bills would open the database, including the locations, of rare species to anyone who took the time to look. So, any unscrupulous collectors of rare plants, dealers in unusual reptiles, or developers who wanted to eliminate an impediment would have ready access.
The U.S. Fish & Wildlife Service has warned that the Game Commission (which oversees mammals and birds) and the Fish & Boat Commission (which has responsibility for fish, reptiles and amphibians, mollusks, and aquatic insects) would loose a total of $27,500,000 in Federal funding for wildlife programs if these bills are enacted.

Spotlighting the legislature’s ignorance is that one of the bills’ prime sponsors was prompted by the cost of mitigating the impacts of a project in his district on a Federally listed species, a requirement that wouldn’t change one iota if these bills were enacted. DUMB!
As if dumb isn’t enough, here’s DUMBER. The Pennsylvania House of Representatives has just passed legislation, the “Coyote Control Incentive Program” that would permit the Pennsylvania Game Commission to pay a bounty of $25 for each dead coyote and would authorize the use of up to $700,000 of the commission’s budget for the bounties. This is the first bounty the state would be paying in 50 years, and is rationalized as giving hunters an incentive to take more coyotes. 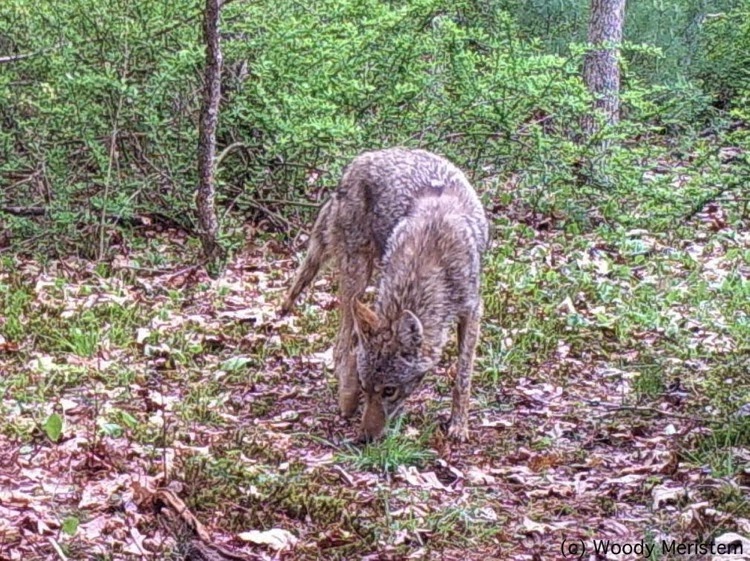 Currently, Pennsylvania allows coyote hunting year-round with no limit on how many coyotes an individual hunter may kill. The data is incomplete, but there are estimates that in 2013 hunters killed more than 40,000 coyotes in the state. It doesn’t take a mathematical genius to figure out that $700,000 wouldn’t even be adequate to pay bounties on the number of coyotes already being killed. Of course that $700,000 would have to come out of productive wildlife management programs or wildlife law enforcement.

Bounties have been paid on coyotes in western states for decades without significantly reducing their population. Coyotes have such a high reproductive potential that 70 percent of the population would have to be removed each year to cause the population to decline. Nebraska’s coyote population kept rising throughout 68 years of paying bounties and Missouri had its highest coyote kill 31 years after beginning bounties. Only a fool would think that Pennsylvania would be any different. 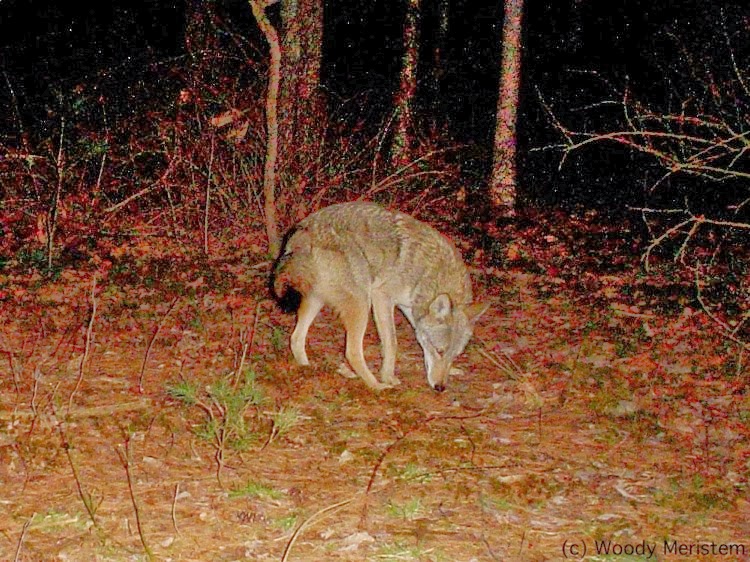 It’s well known that coyotes have a compensatory response to population fluctuations – if their population is low and food plentiful more offspring survive and vice-versa. Bounties, indeed any hunting, tend to eliminate the young and dumb animals – and the smart, wary, more nocturnal and adaptable animals survive to breed a “super coyote”.

Now it’s time to get off the soapbox and go back to photographing wildlife.
Posted by Woody Meristem at 5:21 AM No comments: