The Colors Of Spring


Spring arrives and with it a broad spectrum of colors replaces the drab grays and browns that predominate after the brilliant colors of autumn leave as the leaves fall. For months the only relief from those grays and browns are the greens of evergreen shrubs and the scattered conifers and the white of winter’s snow.

But spring arrives as tree and shrub leaves emerge from the buds where they have spent the winter covering the landscape with a broad array of greens. 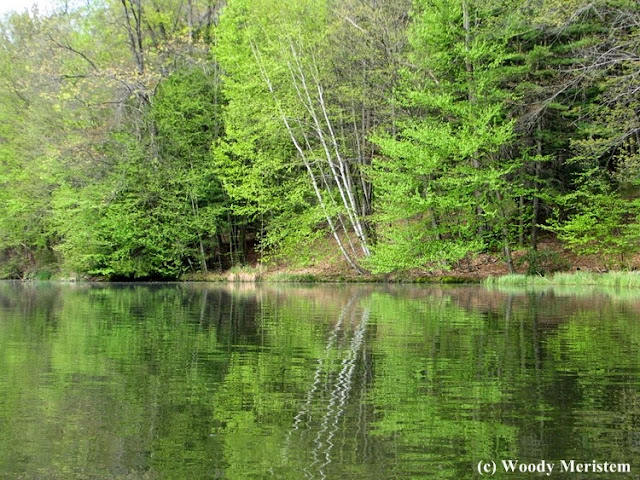 Along with the greens of the leaves come a variety of wildflowers – some of those wildflowers actually bloom before tree leaves fully expand. Among the earliest wildflowers are the marsh marigolds growing in the wetlands – 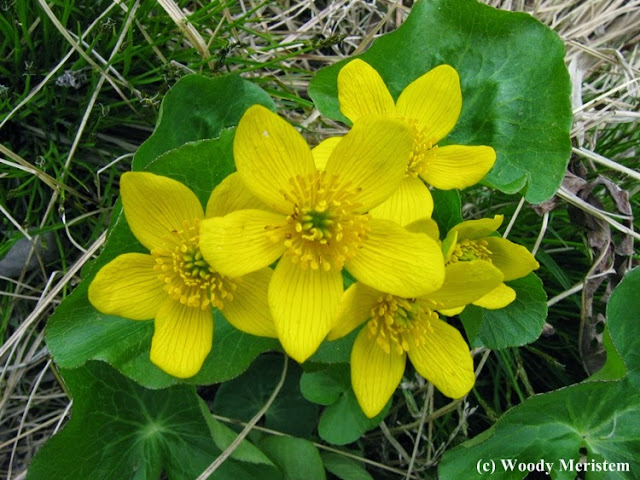 But many bloom after the trees’ leaves are larger or even full size. Wild geranium – 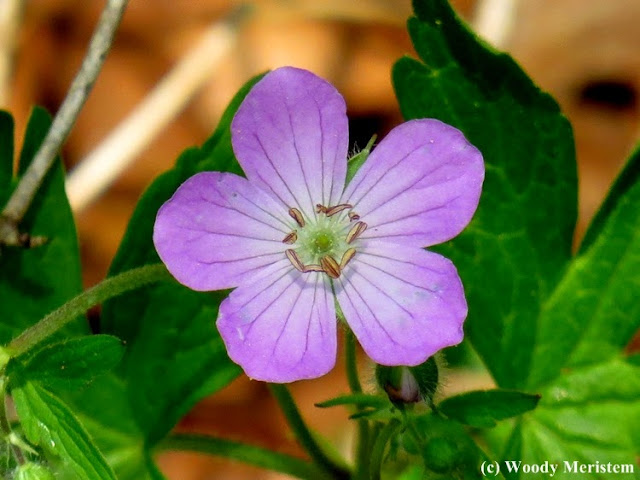 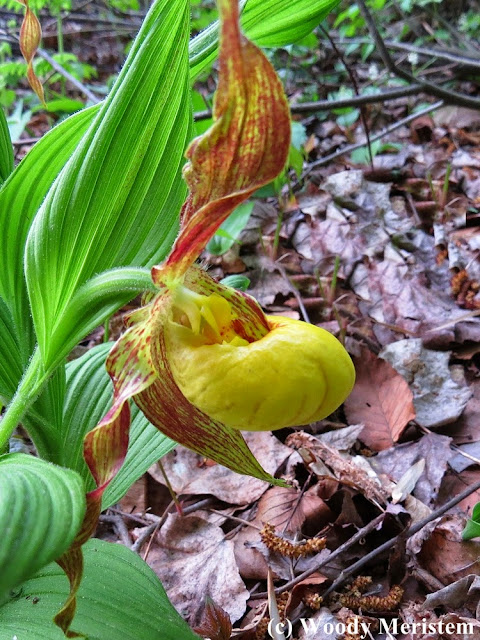 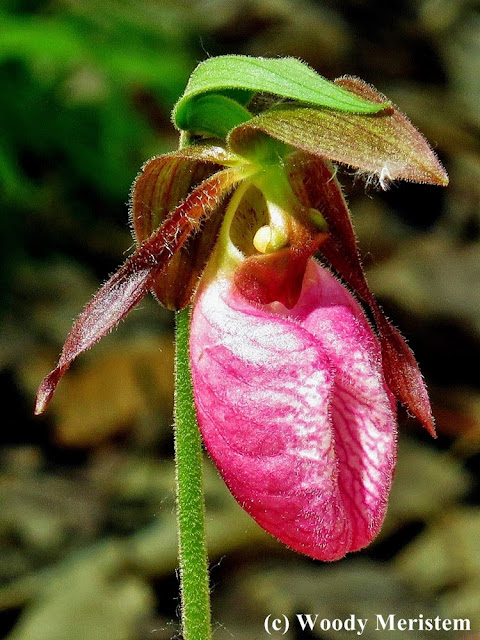 And many, many other wildflowers – including invasive exotics, some, like these dame’s rocket and wild mustard are quite beautiful – 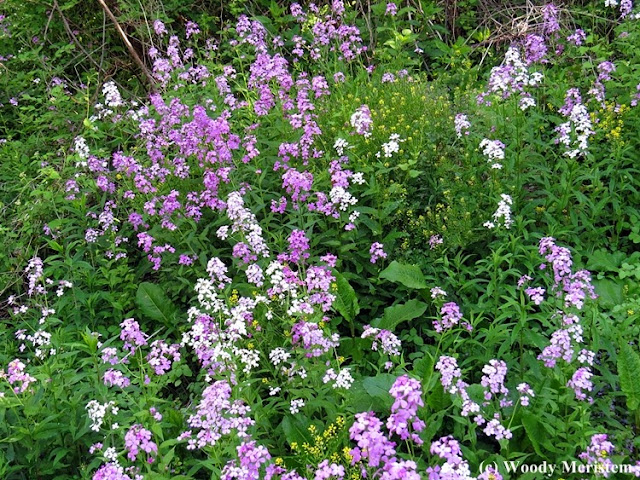 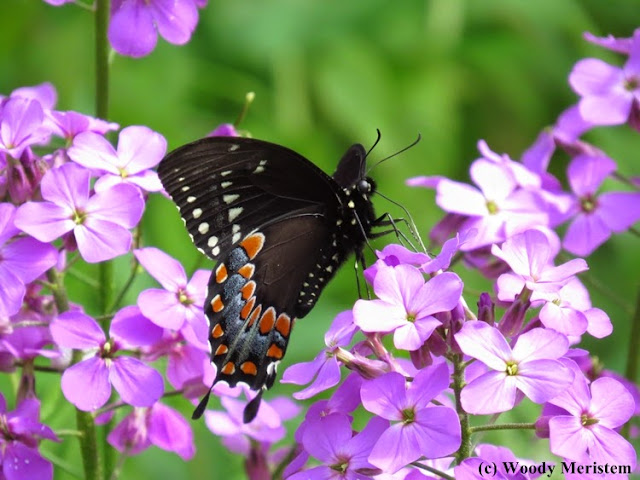 And the eastern tailed-blue 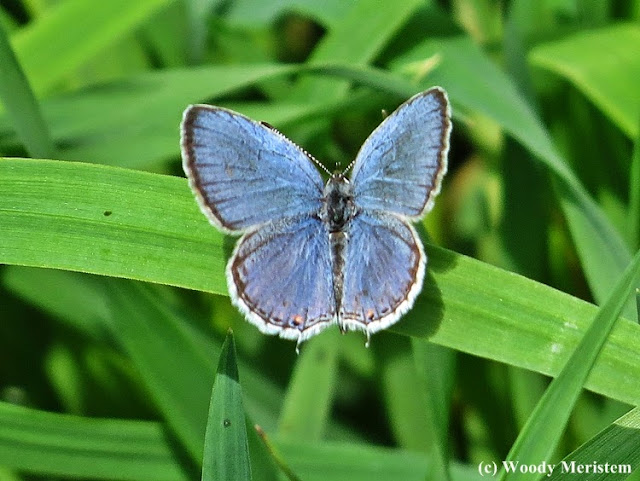 And this colorful little butterfly – 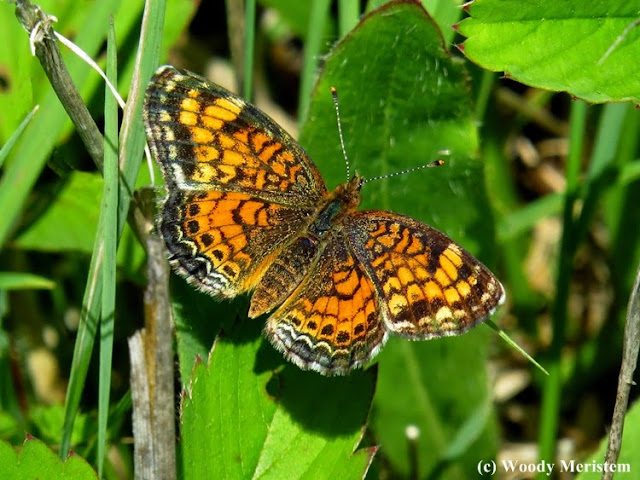 There are too many similarly colored butterflies for me to identify it from a photograph, so I just have to enjoy the sight.

Posted by Woody Meristem at 4:07 AM 7 comments:

Several weeks ago, in that odd season between the end of winter and the beginning of spring, after the last snow had melted but before wildflowers and tree leaves had broken bud, I decided to take a hike through history on the old trail over Bald Eagle Mountain.

Centuries ago Native Americans regularly traveled long distances, in our area from what we now call Chesapeake Bay to central New York’s Finger Lakes and beyond. Apparently there were regular journeys of many hundreds and even thousands of miles. Stone artifacts whose origin can be determined have been found at long distances from where they were initially obtained.

There was an extensive network of trails regularly used to make these journeys to both trade and raid. In our area most of the trails followed the river or major streams – the terrain was easier, there was more food available and semi-permanent villages as well as temporarily occupied sites were located there.

The river has some major bends in its course so that actually following the river would sometimes entail a long walk to not get very far. In those situations people on foot often took shortcuts across the intervening landscape. 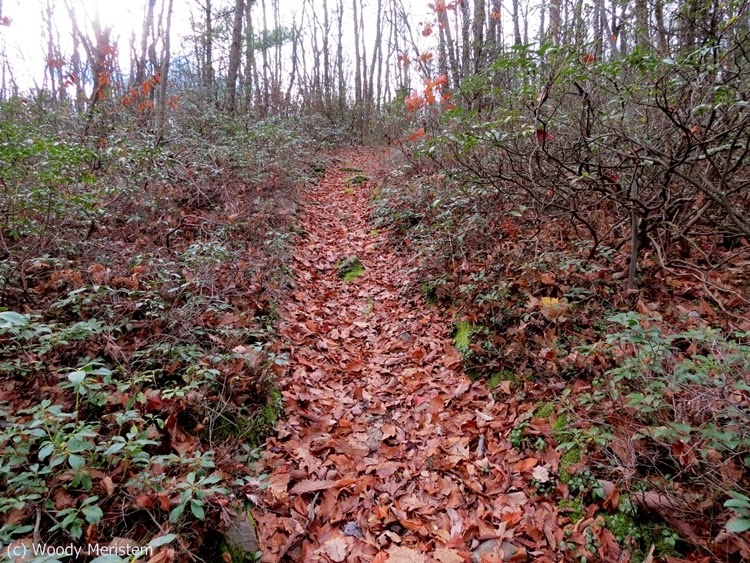 One of those shortcuts went up and over the ridge – a climb of almost 1,200 vertical feet, followed by a descent of 400 feet into a high valley, then up 200 feet to a saddle in another ridge and finally a descent of 1,100 feet down to the river. The shortcut would have taken about nine miles off the journey between two points along the river.
Before and after the American Revolution a large number of settlers moved into the area; a gristmill was built where a stream at the northern terminus of the shortcut entered the river. Settlers in the big valley south of the ridge began using the old Native American path up and over the ridge. Grain was taken to the gristmill on packhorses and the ground product returned the same way. 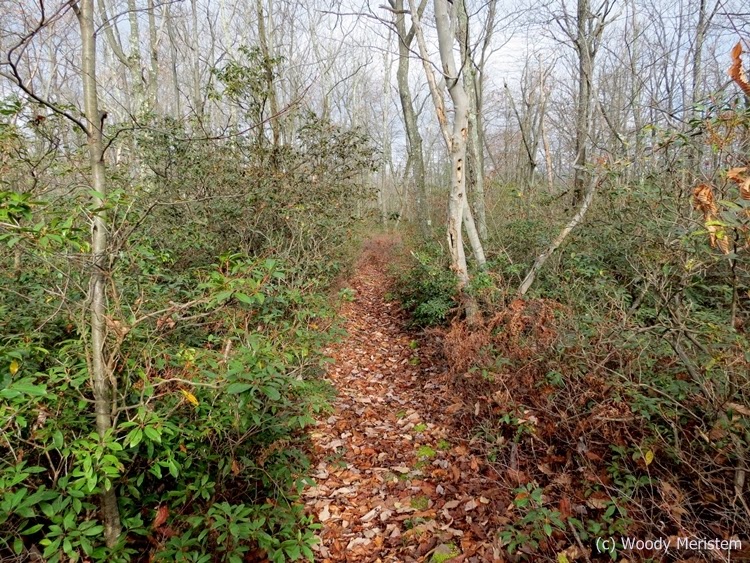 At lower elevations the old path was widened enough over the years that it could accommodate wagons, but up on the ridges and in the high valley there’s no evidence that it has ever been anything other than a path for humans and horses. The county history that was written in 1892 mentions the old path and goes on to say that “It was a famous path in Indian times and was much traveled, and over it many white prisoners, including women and children, were hurried along into captivity.” 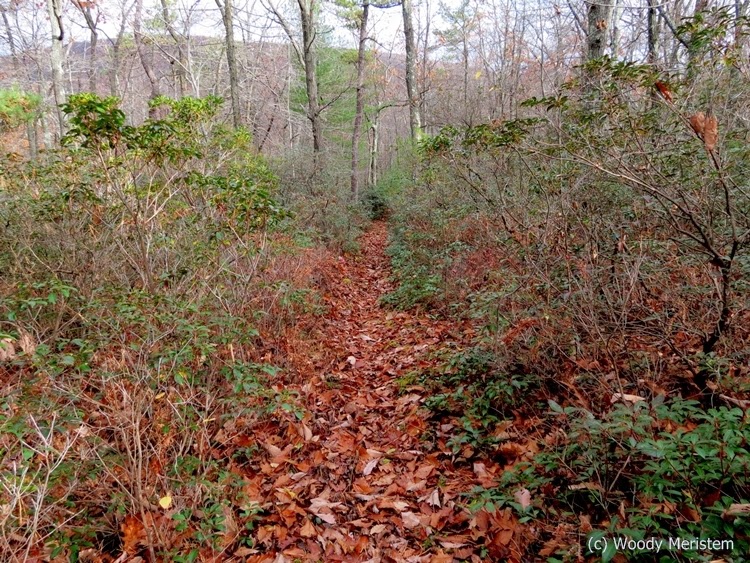 Today in places the old path is hard to follow in dense head-high patches of mountain laurel. But, on the ridgetops and in the high valley hikers and hunters have kept it open and it’s easy to follow. Worn deep in places, it’s a reminder of days and people long gone, an interesting hike, and an entry into some remote country.
Posted by Woody Meristem at 4:30 AM No comments:


Two weeks ago I set a camera trap at the inlet of a large pond in hopes of getting photographs of wood ducks.

Well, it didn’t catch wood ducks – but it got a pretty nice variety of wildlife. A great blue heron visited the inlet – 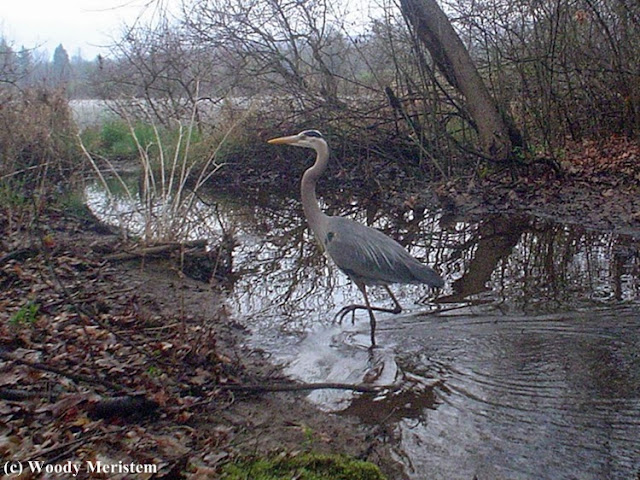 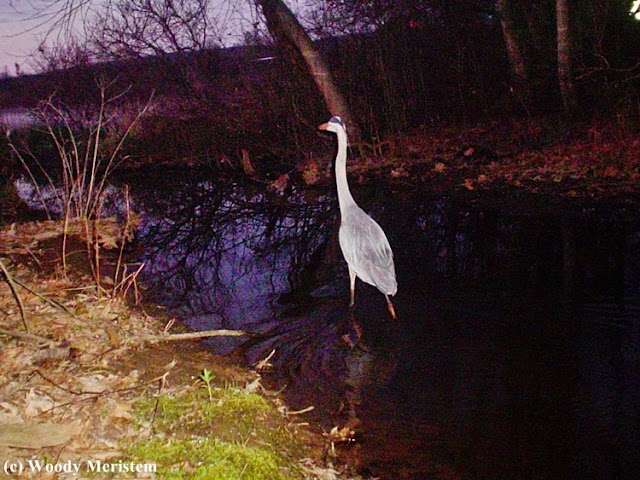 A Canada goose and its goslings also visited the inlet – 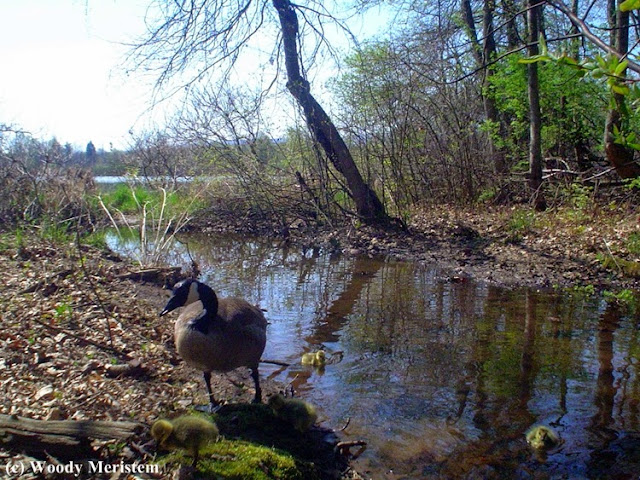 And, one evening, a white-tailed deer came for a drink – 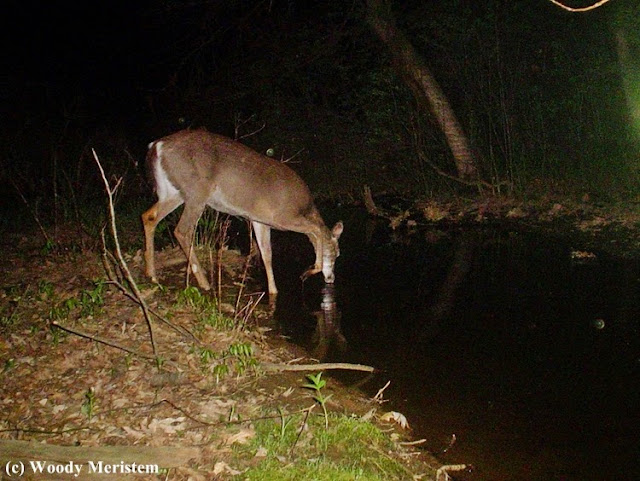 and then waded across the inlet – 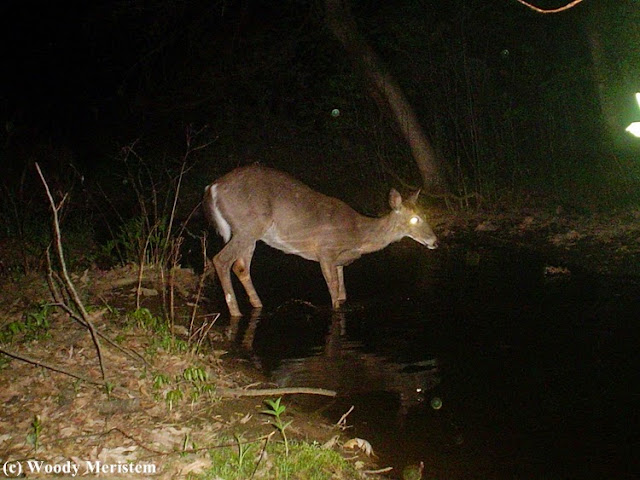 The pond isn’t in the Big Woods, so it was somewhat surprising when there were pictures of a bobcat during daylight and the next night getting a drink from the inlet – 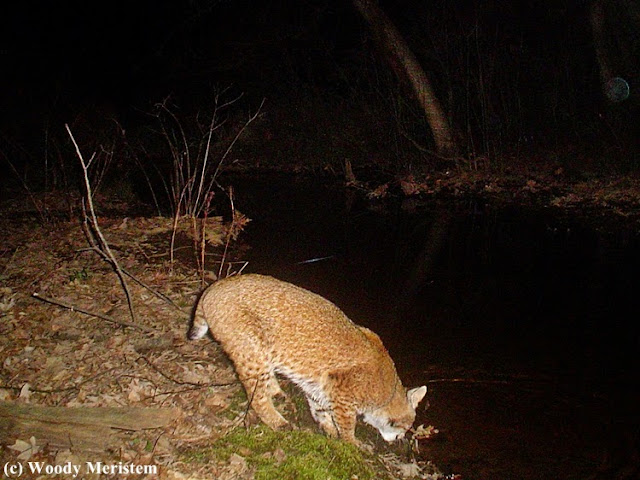 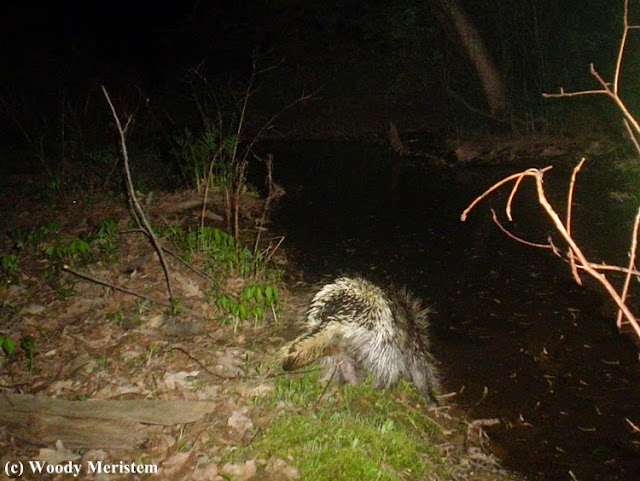 And there was the tail end of a passing black bear – 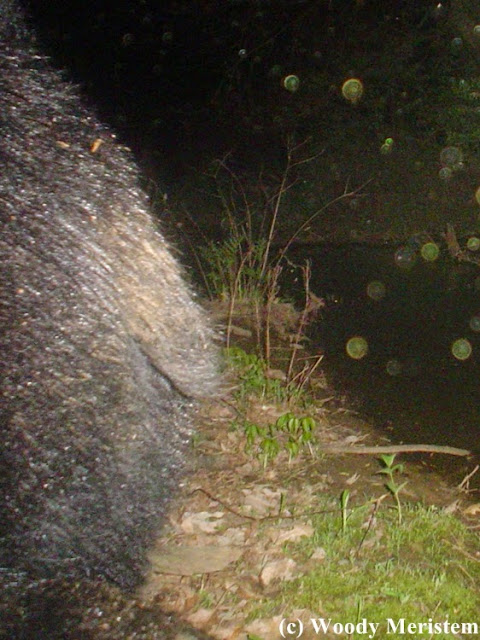 Unfortunately, that was the only image of the bear. Apparently it passed by too rapidly for the camera to wake up and get the whole bear in the picture.

Yes indeed, checking a camera trap is like opening a surprise Christmas present – you never know what you’ll find.
Posted by Woody Meristem at 4:37 AM 8 comments:

Warm weather has arrived with a vengeance, causing the spring wildflowers to burst into bloom.

Wild orchids and trilliums have always fascinated me; the orchids are aren’t in flower yet but the trilliums are in full bloom.

The most common trillium in this area is the purple trillium (Trillium erectum), also known as wake-robin or stinking Benjamin (an ugly name for a beautiful flower). The plants are usually found as scattered individuals or small colonies. But in one small spot in the Big Woods I found over 100 blooming plants in an area about ten feet in diameter. 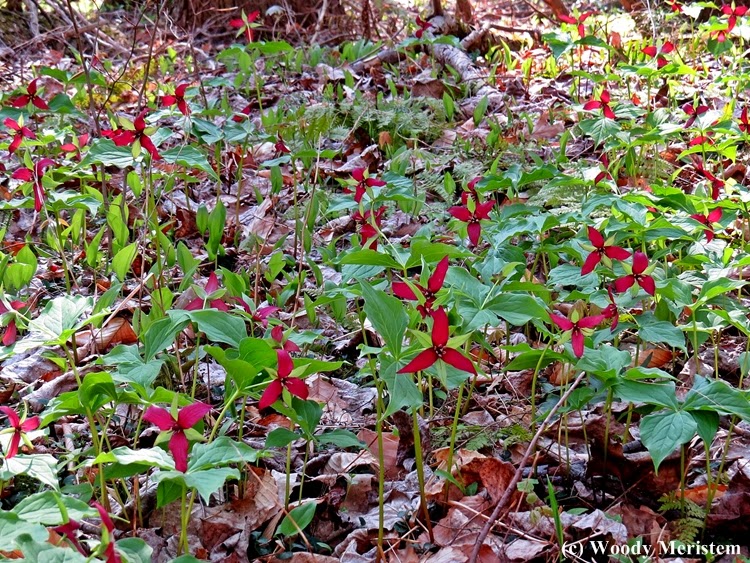 Although most of the flowering plants were small, a few of the plants were large and apparently mature with impressive flowers – 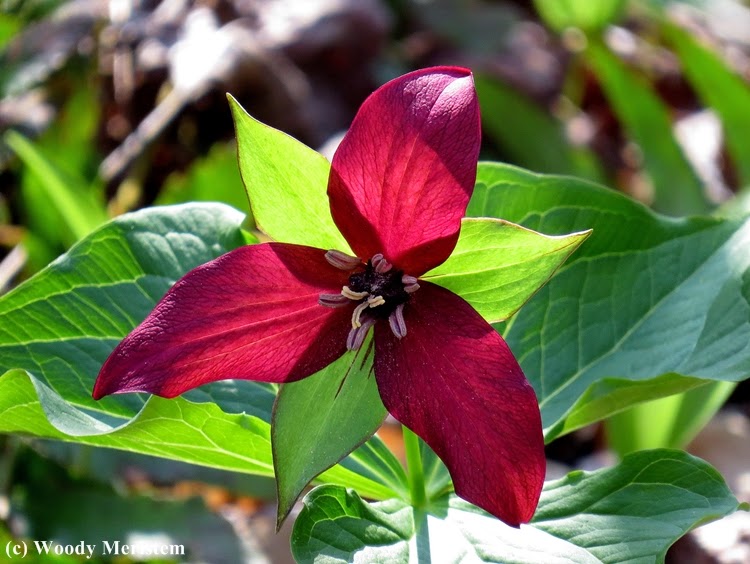 Although white trillium (Trillium grandiflorum) is native to the area, it’s virtually impossible to find any here – 80 years of high white-tailed deer populations have effectively eliminated the species from the Big Woods. The only place I can find any of the plants is within a deer-proof fence. What a beautiful flower – 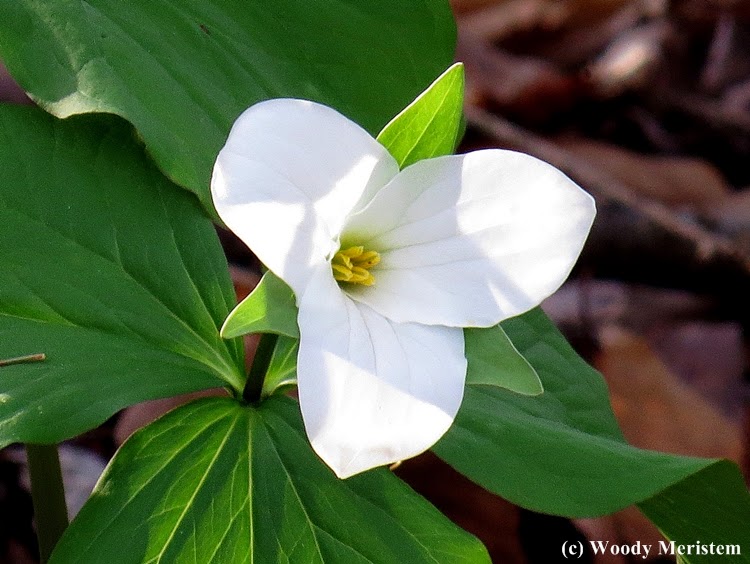 There are reportedly seven species of trillium native to Pennsylvania, but the only other trillium that can be found in the Big Woods is painted trillium (Trillium undulatum). Its occurrence is spotty, but it can be quite abundant where it is found – 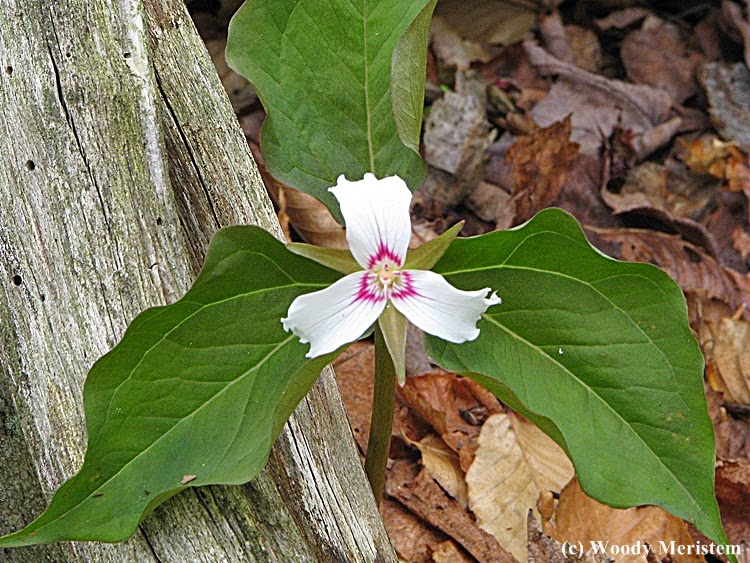 Of course, trilliums aren’t the only spring flowers in bloom in the Big Woods. There was the aptly named spring beauty – 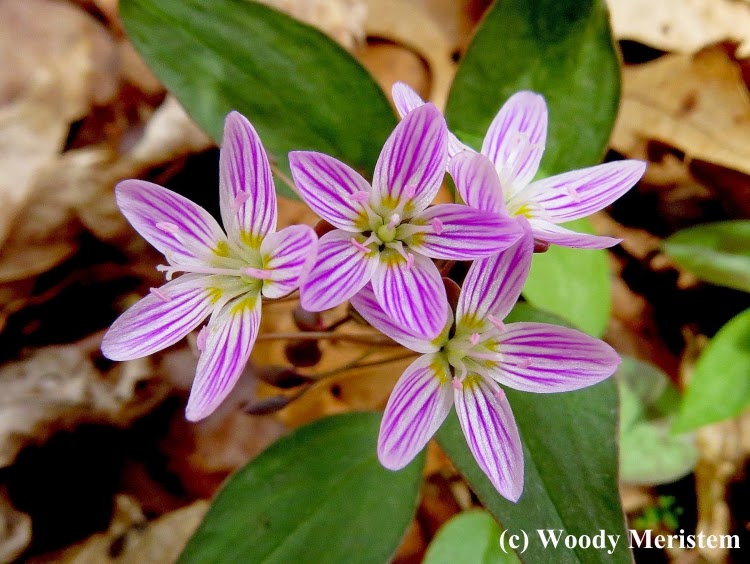 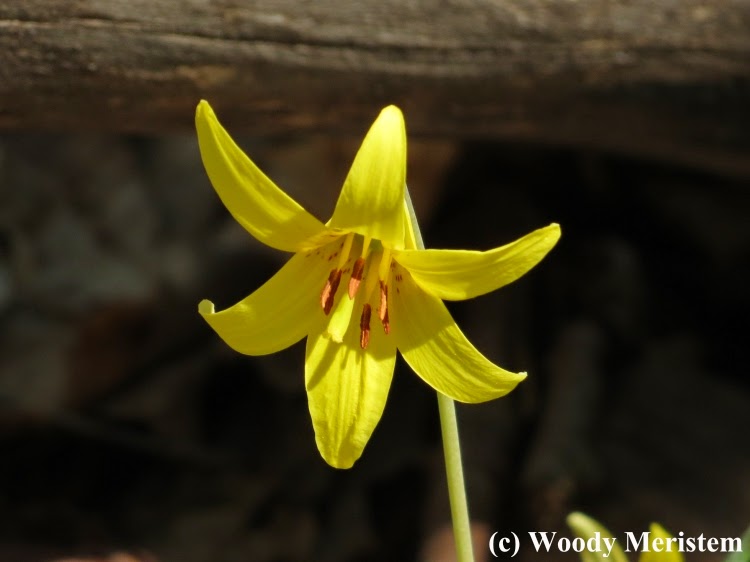 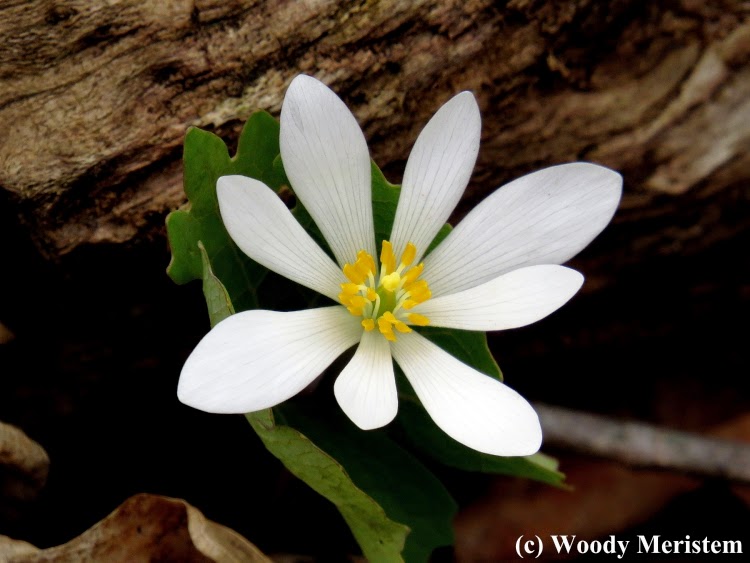 And a number of other species. What a great time of year!