Migrants are arriving regularly now as the season progresses. On a large pond there was a flock of Canada geese that numbered well over one hundred; but more interesting were the tundra swans, seven in number. 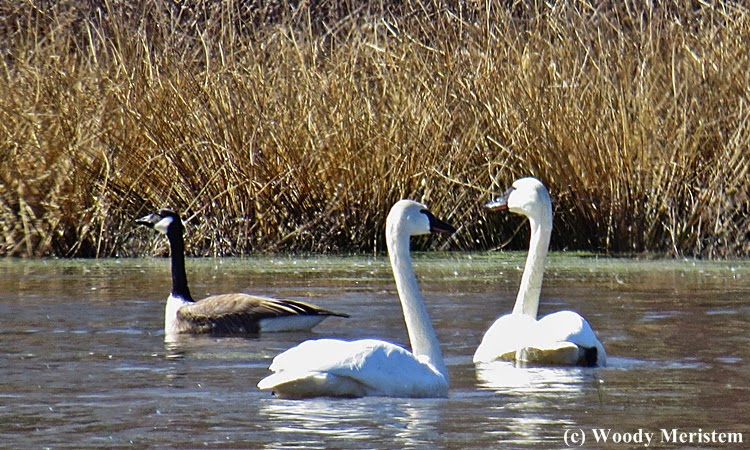 As a red-tailed hawk circled overhead – 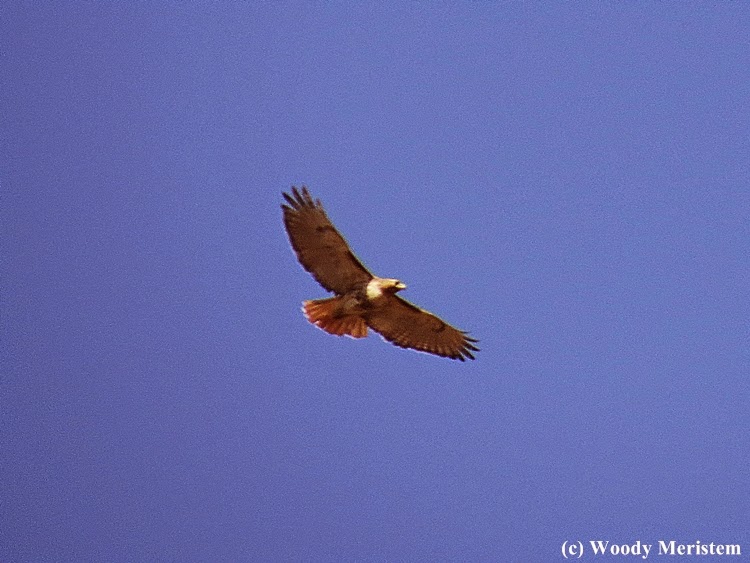 All of the geese took to the air – Leaving the pond to the swans –

And one lone male ring-necked duck 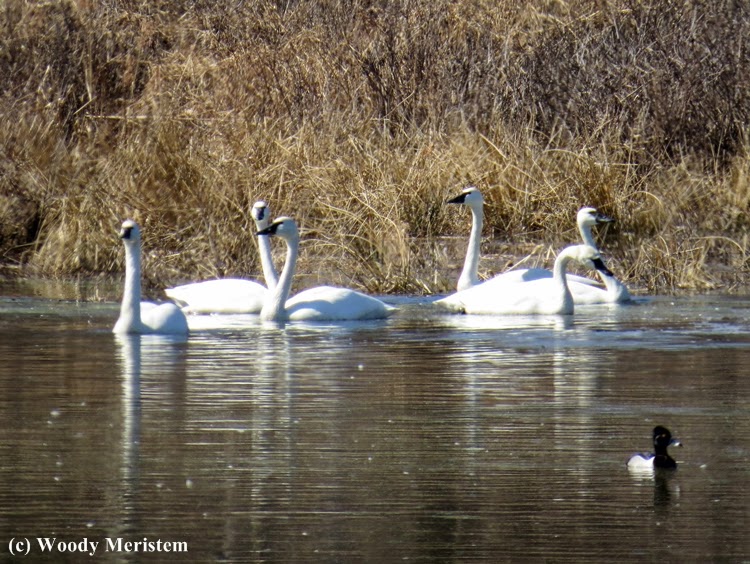 Back when I was a young naturalist (instead of an old naturalist) tundra swans were known as whistling swans and before that they were called American swans - and then there's the scientific name (Cygnus columbianus). Like many other birds their name has been changed over the years – they must be confused by the fickleness of the humans who name them.
Posted by Woody Meristem at 10:36 AM 5 comments:

The Waterfowl Are Back

The days are growing longer, temperatures have climbed to well above freezing and the river’s thick covering of ice is breaking up. In open water the vanguard of spring migration has arrived – waterfowl stopping to rest and feed on the river as they head north.

Most of the ducks that have graced the river in the last few days breed far beyond northcentral Pennsylvania, some above the Arctic Circle. Often the birds gather in flocks comprised of several species. 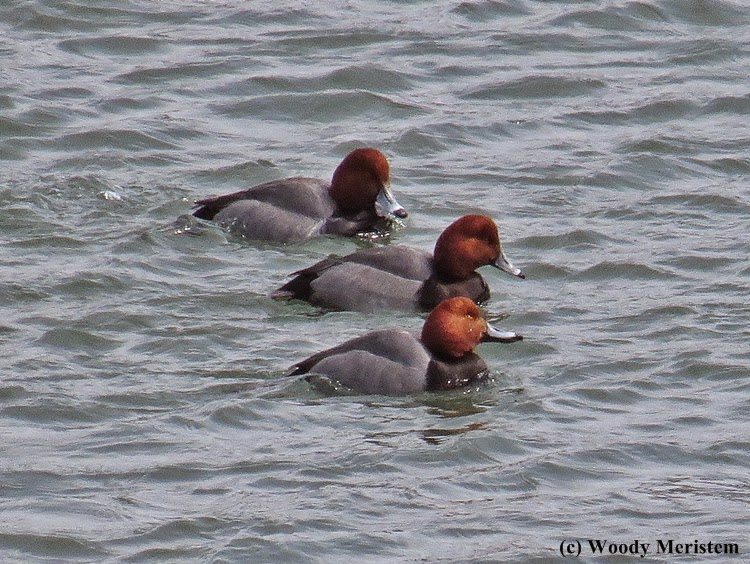 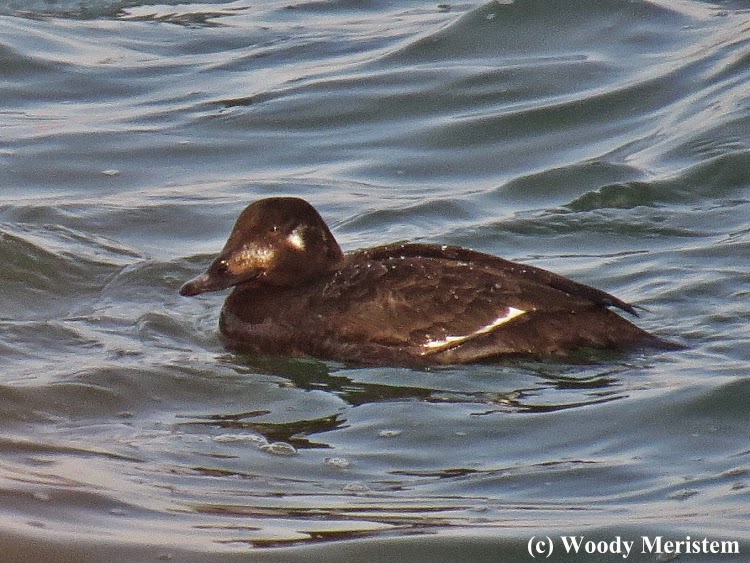 Quite a few lesser scaup, almost all males – 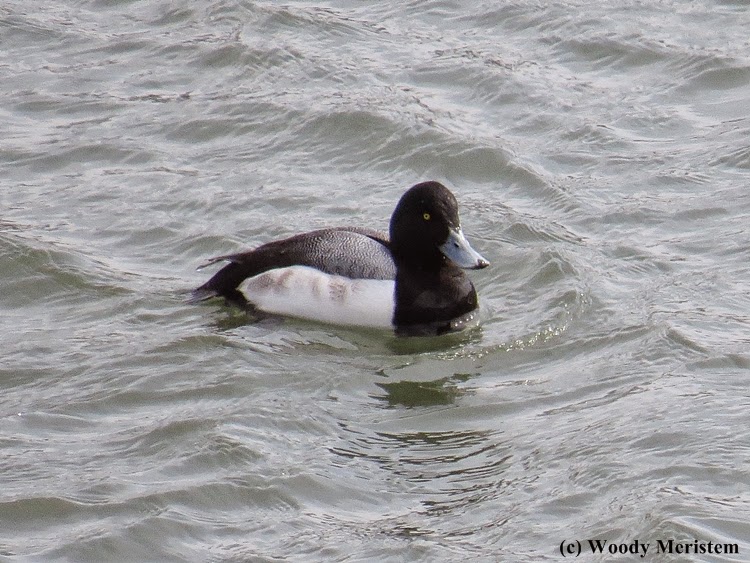 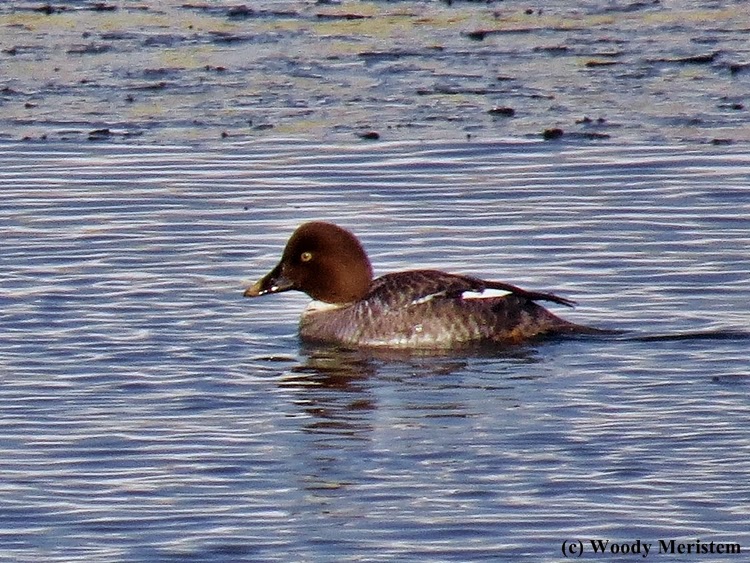 And a couple of male canvasbacks among the redheads – 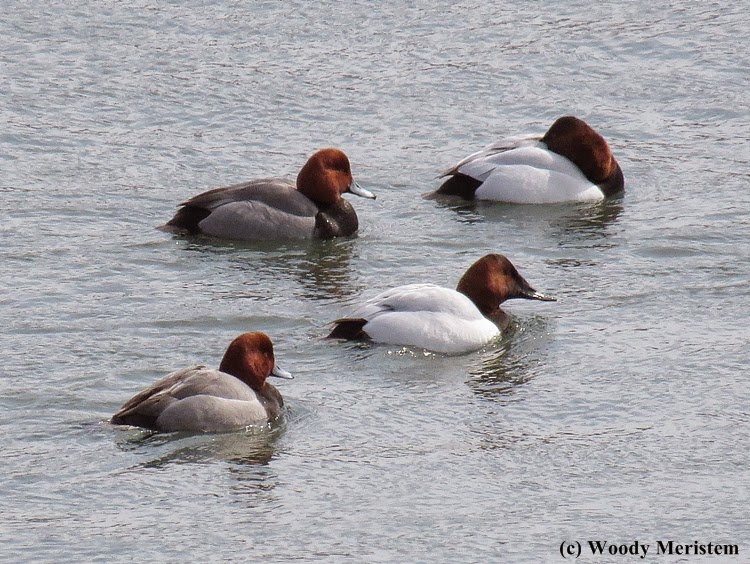 Nearby were several female red-breasted mergansers – 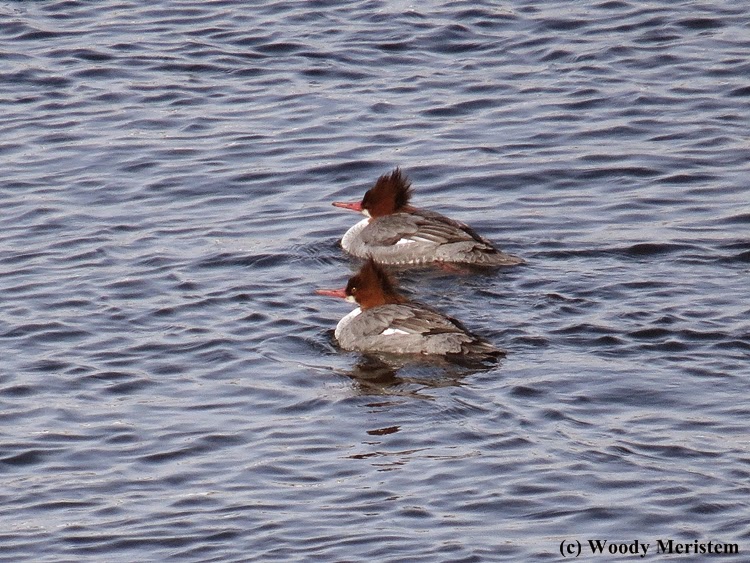 And a hooded merganser – 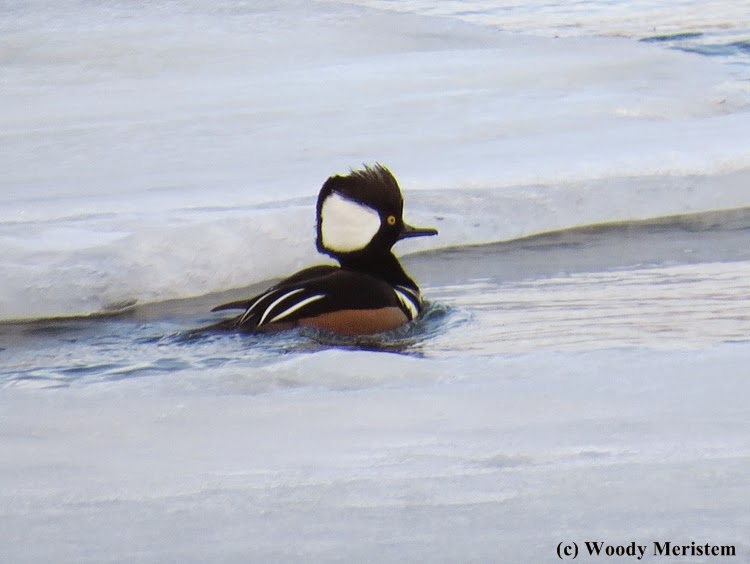 The flocks will soon move on to their breeding grounds; perhaps we'll see them in the fall as they head south, perhaps we'll have to wait until next spring to see them again.

Posted by Woody Meristem at 2:43 AM 5 comments:


The last few weeks have been fairly cold, this week it’s much, much warmer, feels like spring and the snow’s melting rapidly. The ice in the locks on my camera traps has thawed so it was time to check what they’d caught after I’d not checked them for a month.

The camera traps above the house usually get a lot of photos of raccoons and opossums – this time they didn’t have any. In cold weather both species tend to stay holed-up in sheltered spots.

But, the camera traps had gotten quite a few photographs of deer, gray fox and crows.

Because the weather had been cold, the snow was light and fluffy for most of the month. The gray fox was light enough that it didn’t sink into the snow – 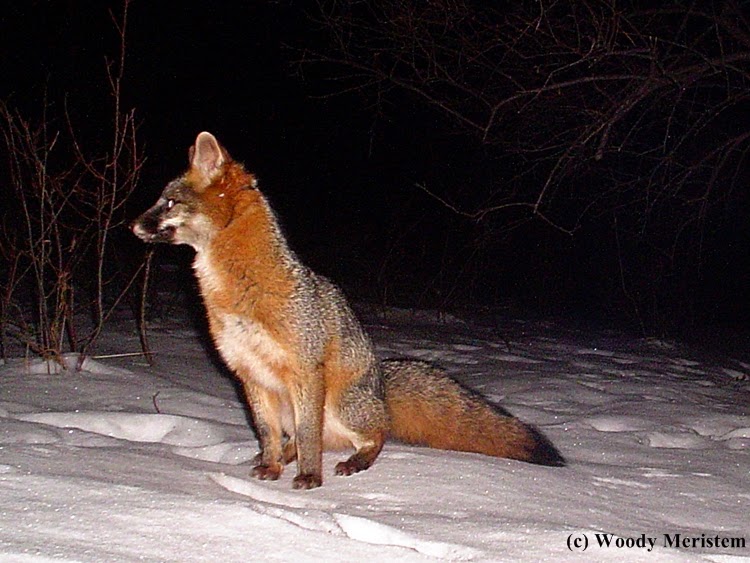 But the deer did – 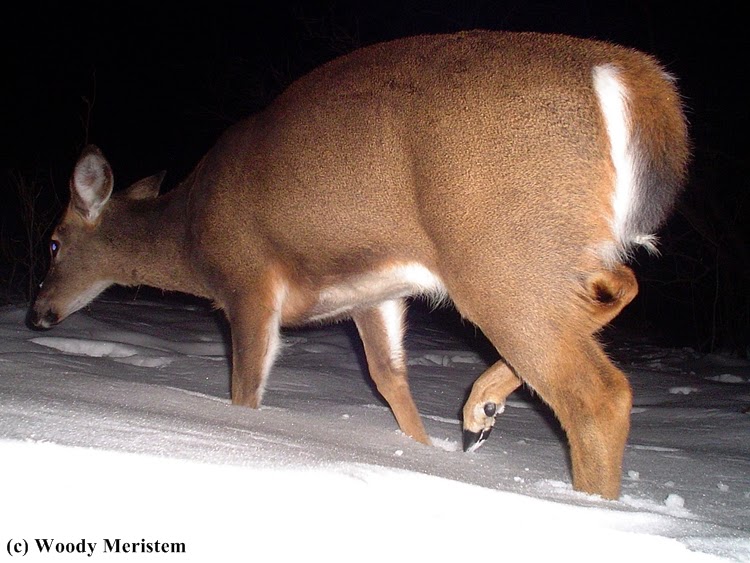 Among the deer that appeared in front of the cameras was the injured buck, with evidence of the injury showing on the inside of his left leg – 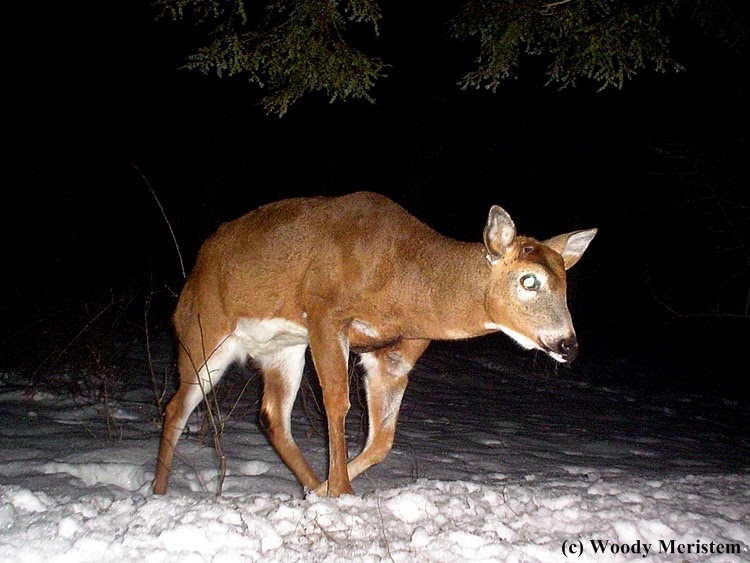 And a buck that still carried his antlers on March 2nd, much later than white-tail bucks usually carry their antlers in our area – 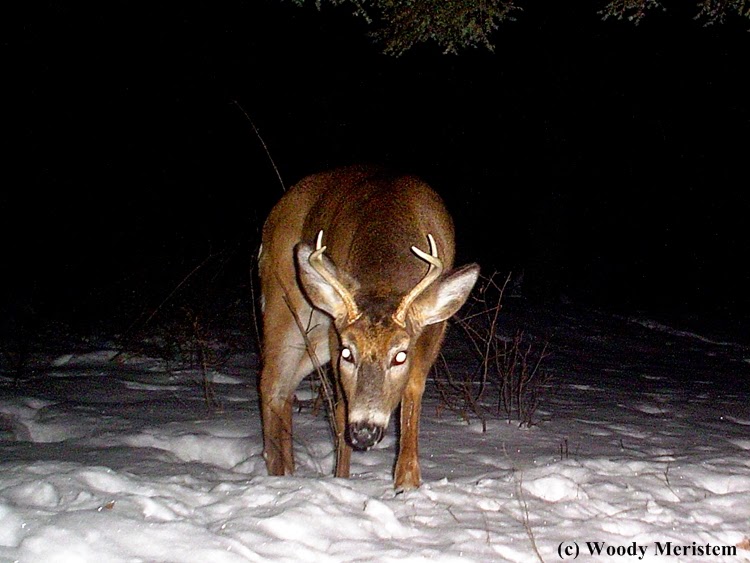 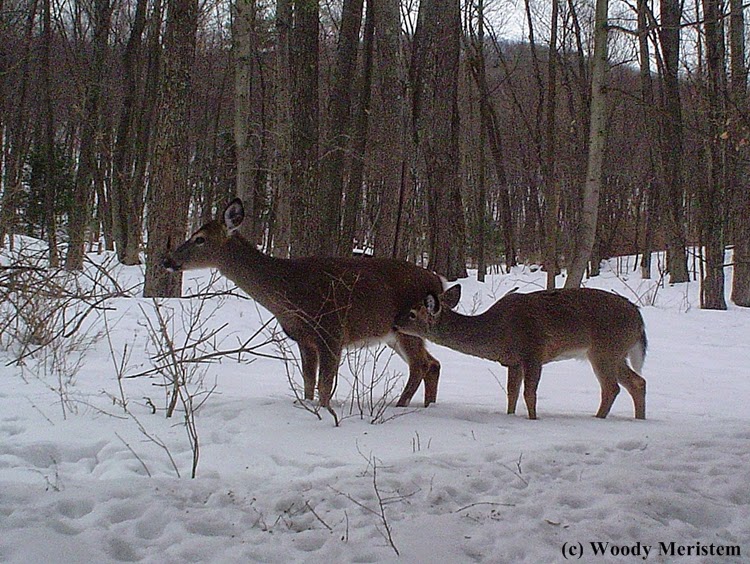 With a forecast of daytime temperatures above 40°F for the next week the snow will be melting rapidly; winter weather may be over and spring on its way.

Posted by Woody Meristem at 4:37 AM 4 comments:

Down along the river on a cold morning the male of the pair of peregrine falcons was perched with his feathers fluffed to help ward off the low temperature. Just like a human with a down jacket, the fluffier the insulation the more air is trapped and the warmer the body inside.

Usually when I see either peregrine along the river the bird’s crop is bulged out by a recent meal. On this day the male’s crop was more distended than I’ve ever seen it. The tree in which he was perched is no more than 200 yards from a bridge with a significant population of pigeons, with even more pigeons and starlings to be found among the buildings on either end of the bridge. 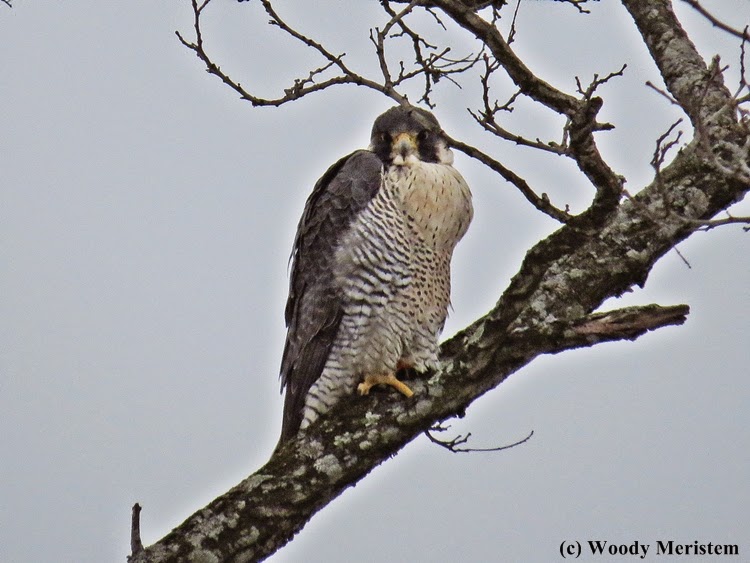 Life must be pretty easy for this pair of peregrine falcons with a seemingly inexhaustible supply of pigeons to fuel the birds' internal furnaces on a cold day.

In one of the few unfrozen spots in this stretch of the river several male common mergansers were searching for fish. Suddenly one surfaced with a large fish clamped in its beak – 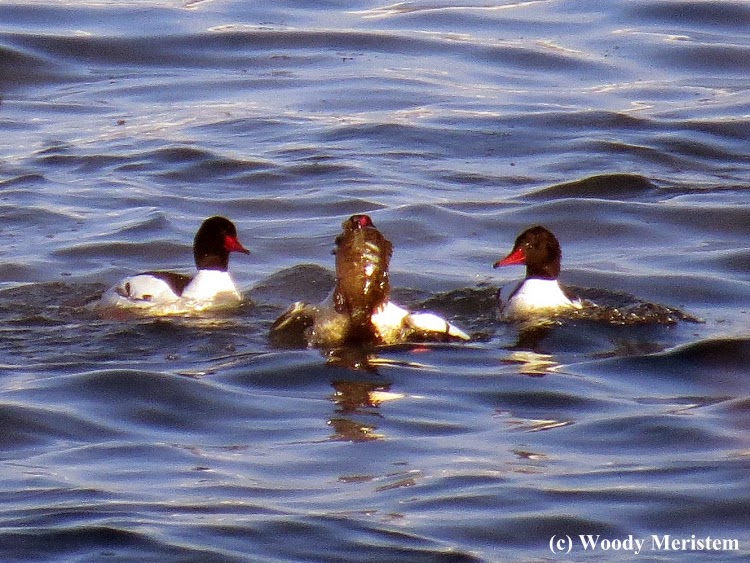 The other males pursued the successful one in a vain attempt to steal its catch. With a bit of effort the merganser swallowed the fish and filled its crop.
Posted by Woody Meristem at 5:01 AM 3 comments: