Finally caught up with my reading, gradually working through the magazines that had piled up over the past months. Only a bit over a year and several months late, and deep in the pile, I eventually got to the November 2013 issue of Smithsonian and there, staring out from the page was a photograph of a compass that looked amazingly familiar. 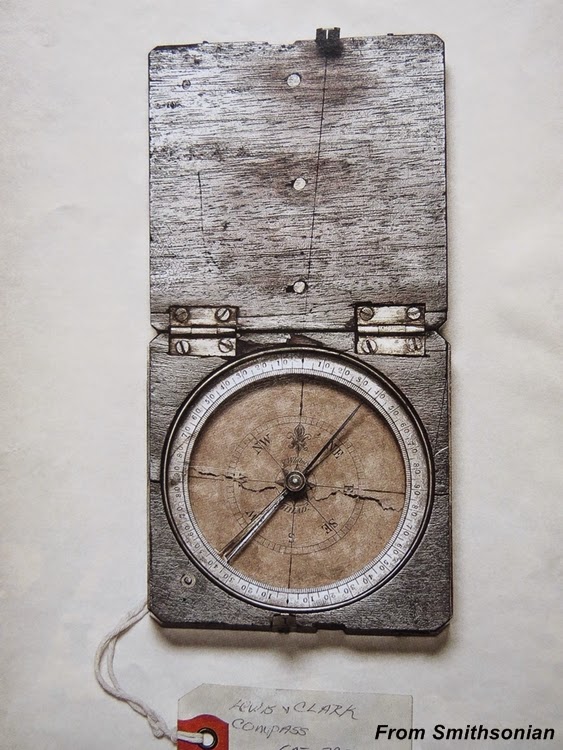 It was a photograph of the compass Meriwether Lewis carried on the Corps of Discovery (Lewis and Clark) expedition that President Thomas Jefferson sent west to map and explore the Louisiana Purchase. The journey to the Pacific Ocean and back lasted from May 1804 until September 1806.
The reason the compass looked familiar is that in 1960 I purchased a Model 5600 “Forestry Compass” made by Kuffel & Esser Company. At the time it was the premier hand-held compass used by foresters, geologists and surveyors. 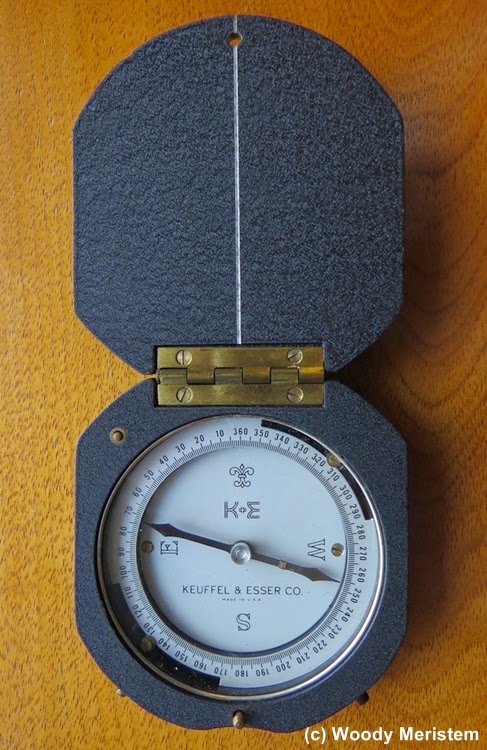 The compasses aren’t identical: Lewis’ compass was made with a wooden case, mine with an aluminum case; Lewis’ compass has a set of sights in the form of two slotted posts that are aligned to take a bearing, mine has a sight line milled in the lid – but they’re remarkably alike given the 150 year difference in their ages. 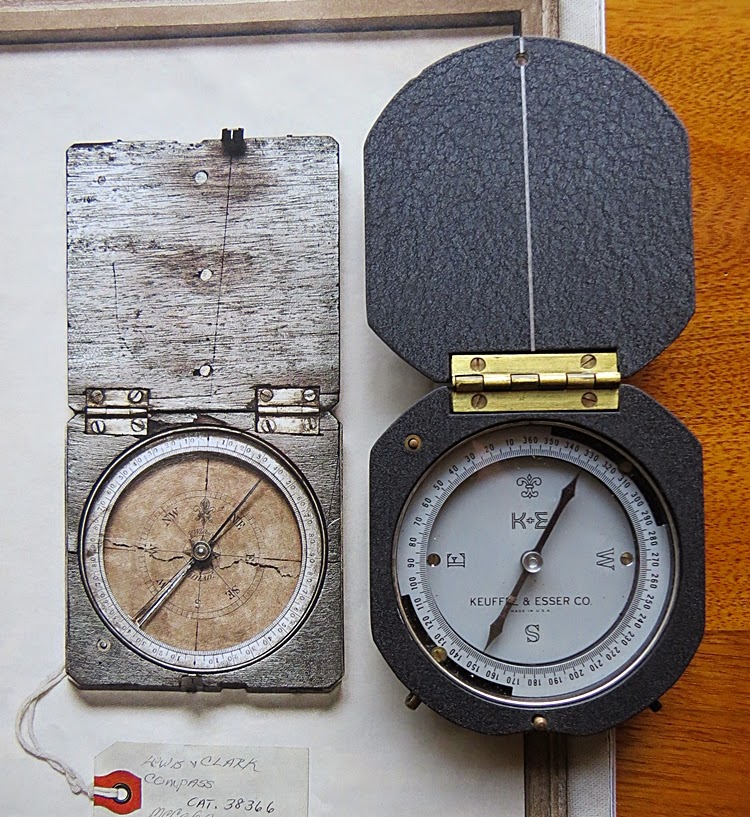 Compasses are rapidly becoming obsolete as professionals as well as hikers, hunters and other outdoor folks adopt electronic Global Positioning System (GPS) devices that can determine their location to within a few feet anywhere on the earth. GPS receivers are now even in cars, cameras and cellphones – some will actually speak to you.

However, in reading the reports of rescues it quickly becomes apparent that relying on GPS is fraught with potential problems – from people who, following the directions given by their vehicle’s GPS, use roads that are closed in winter and get marooned in deep snow; to hikers relying on a GPS receiver until its batteries give out and they’re totally lost. If a GPS receiver can’t “see” enough satellites it won’t give a reliable reading – think about beneath dense foliage or in deep narrow valleys – and if water gets inside …

There’s a lot to be said for an old-fashioned compass and map – no batteries to fail; they work beneath dense foliage and in deep valleys; and no annoying computer-generated voice – this old codger will keep using his old compass.
Posted by Woody Meristem at 5:36 AM 2 comments:

This is the time for the 115th annual Christmas Bird Count. For those of you who aren’t familiar with what is commonly called the Christmas Count a bit of detail: In the late 1800s eastern forests had been decimated by “cut and get out” logging; wildlife populations were under tremendous pressure from unregulated hunting, including market hunting; the passenger pigeon’s billions of birds were on the brink of extinction; the bison’s millions had been reduced to a remnant population in Yellowstone and in zoos and private preserves; egrets and songbirds were killed to adorn ladies’ hats. It was common for folks to take to the field on Christmas day, guns in hand, form teams and kill as many birds as possible. The team with the most birds won.
In an effort to reduce the slaughter of songbirds the early leaders of the Audubon Society organized the first Christmas Bird Census to count birds rather than kill them. In the intervening years the Christmas Count evolved into an effort to count all the birds in a circle 15 miles in diameter on one day. There are over 2,300 Christmas Count circles throughout the world, most in the United States and Canada.
Recently I participated in a Christmas Count I’ve been doing for over 30 years, covering the same portion of the circle for all those years, an area that I know well. It’s an interesting area with a diversity of habitats – mature woodland, cutover forest, tree plantations (young and old), cropland, abandoned fields, ponds, wetlands and small streams. Because of the diversity of habitats it offers a wide variety of bird species. The Christmas Count is great fun, whether I do it with friends or family or alone; a chance to revisit an area I like, wander through all those habitats and see other wildlife in addition to the birds.
It’s interesting to see the trends in bird populations as the habitat changes – as fallow fields are put back into agricultural production; after the owner of a large acreage clearcut a significant area; one year the ponds are frozen, the next they’re not; when new houses spring up in what had been fields or forest.
Some folks call the Christmas Count “citizen science” and researchers have spent countless hours and reams of paper and megabits of data compiling and analyzing the results. But, like all scientific efforts, the value is dependent on the quality of the data collected and how it’s used. But there are also serious concerns about the value of the data  – especially about species that are hard to identify or uncommon in an area. Many people just don’t have the skill to identify species correctly, aren’t interested in being cold or wet or don’t cover their area thoroughly – is the information they collect worth having? How good is the “citizen science”?
Enough for the Scrooge stuff, for now I’m going back to photographing birds.
Posted by Woody Meristem at 7:04 AM 4 comments:

Northcentral Pennsylvania receives fairly frequent ice storms when supercooled rain falls and freezes almost instantly when it hits the ground, trees or other objects. Two days after a light freezing rain I headed to a wooded park in the Big Woods to hike out to an old abandoned farm.
All of the trees and shrubs and dry stalks of herbaceous plants were coated with a thin layer of ice:
The branches of a hawthorn – 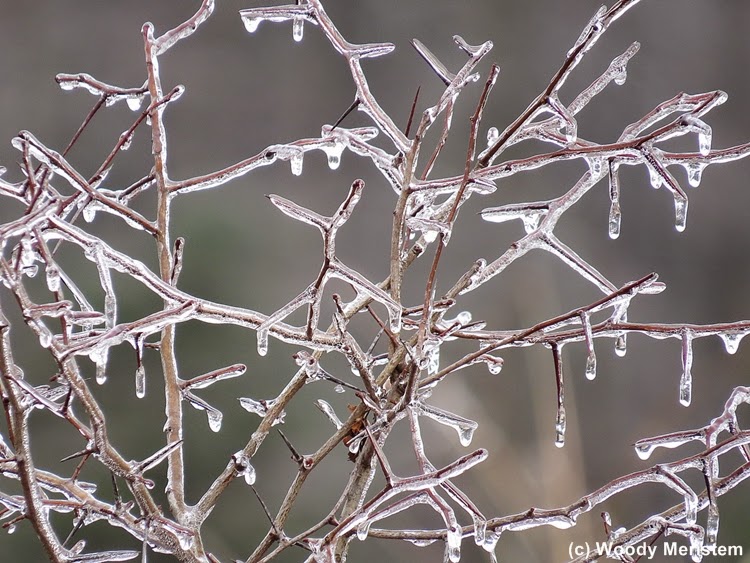 A small crabapple still hanging from a twig – 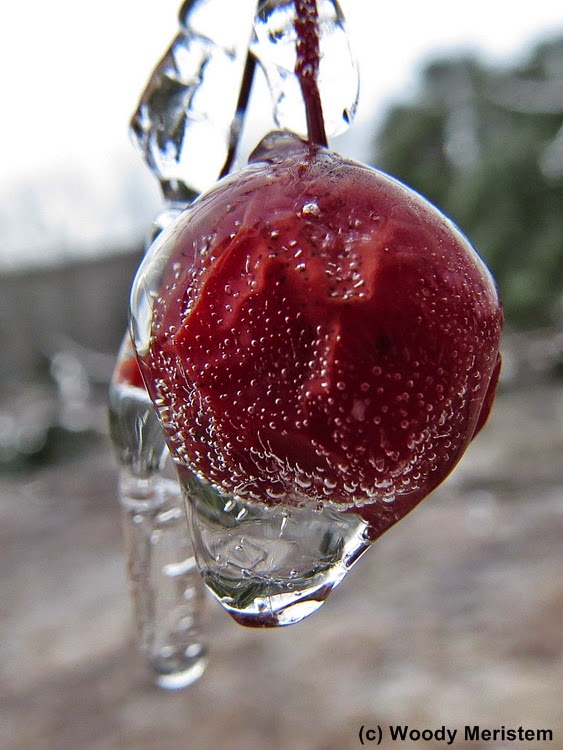 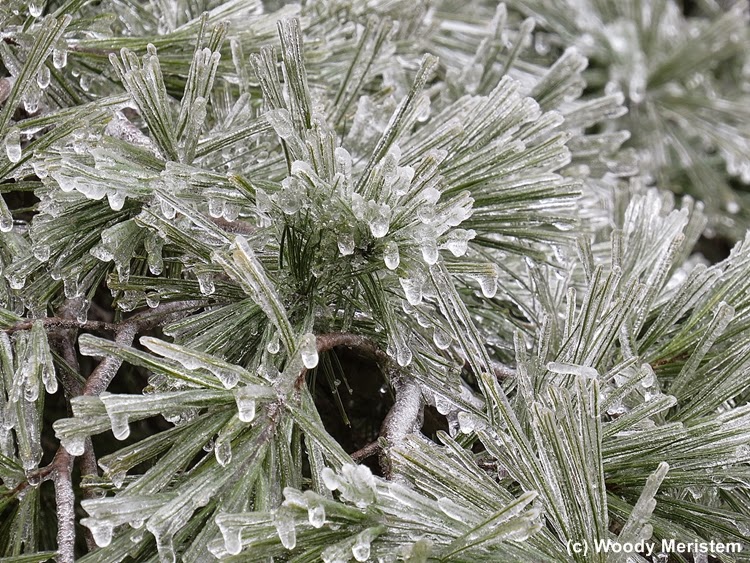 Goldenrod and aster stems weighted down by the ice – 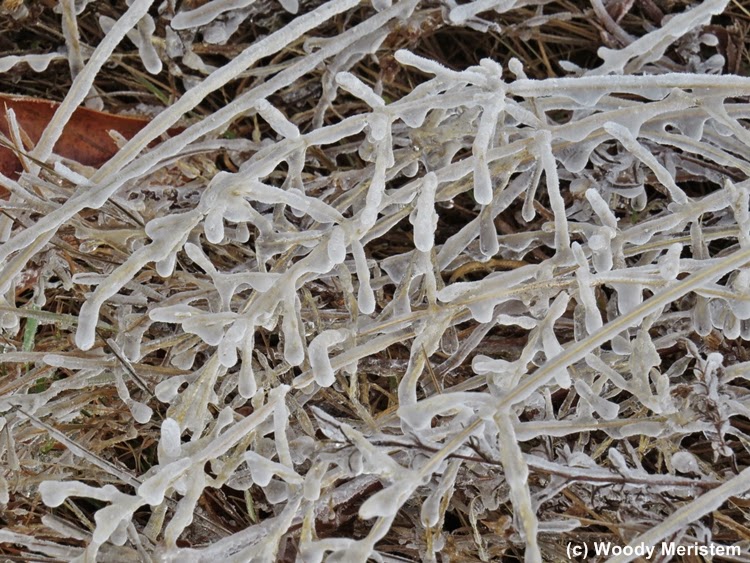 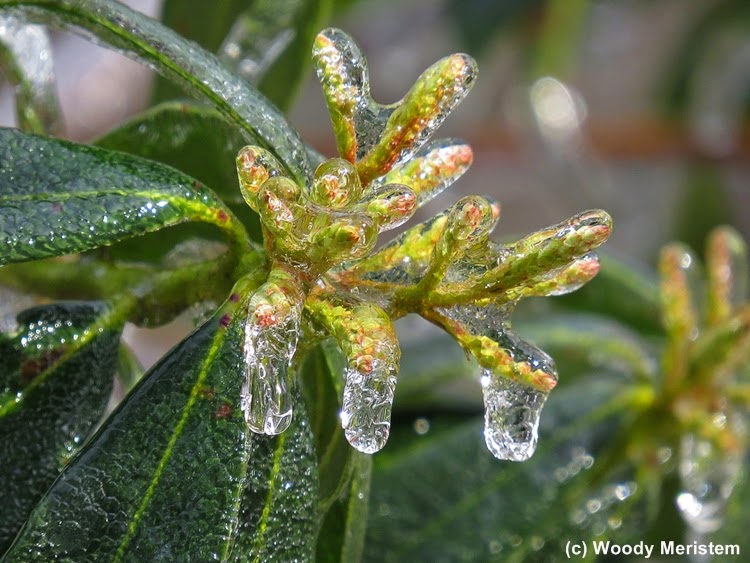 And a dry sweetfern leaf – 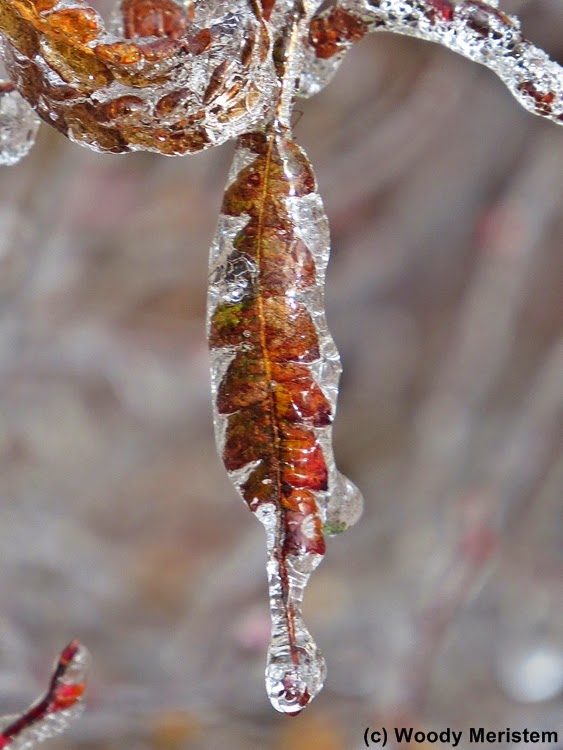 Sweetfern actually isn’t a fern; it’s a shrub related to bayberry and more distantly related to walnut and beech trees.

This ice storm didn’t result in enough ice forming on the trees and shrubs to cause any damage, but a few years ago what began as light snow changed to an ice storm that resulted in major damage to many trees over large areas. 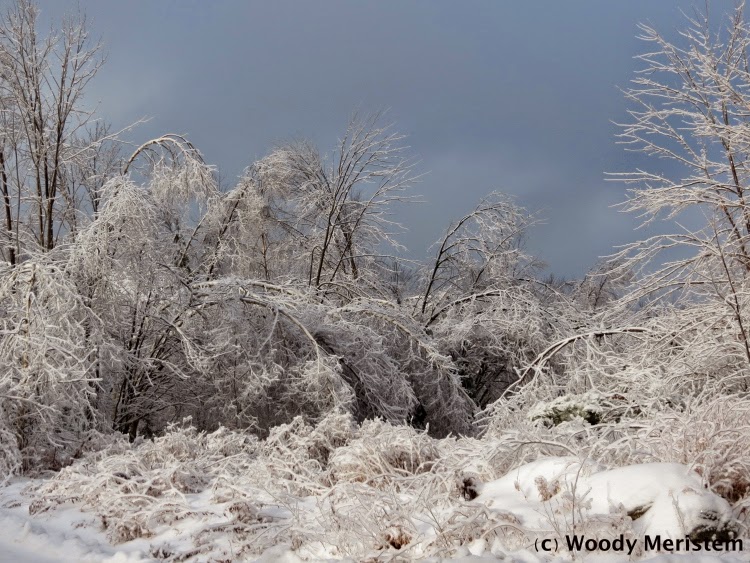 Posted by Woody Meristem at 9:07 AM 2 comments:

Down By The Riverside II


This is the dreary time of year; at times it seems as if everything in the outdoors has turned drab gray or brown. Even the sky was gray this morning, without a hint of blue anywhere. Nonetheless, it was a good day to walk along the river, although with the low dark clouds and a bit of mist in the air it was a terrible day for photography.

Even the birds along the river were various shades of brown, gray or white on this gray morning. As usual, the most abundant birds on this December morning were dark-eyed juncos, flitting among the shrubs or flushing to fly a short way ahead as I walked. 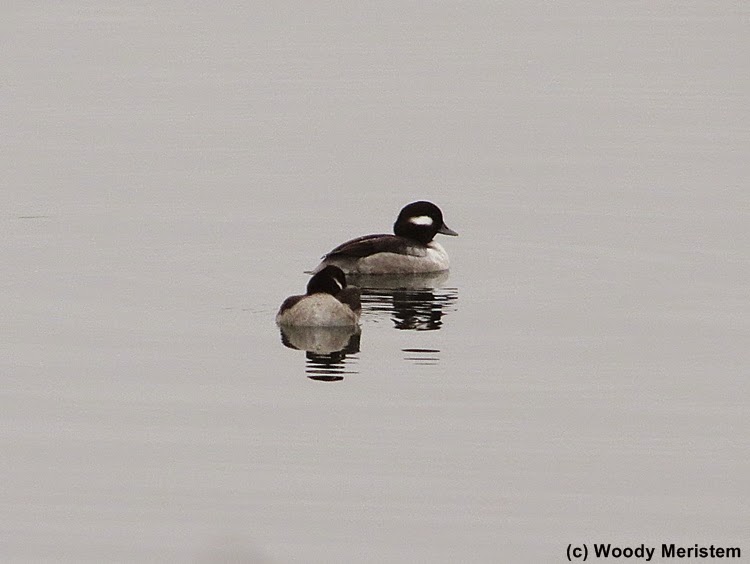 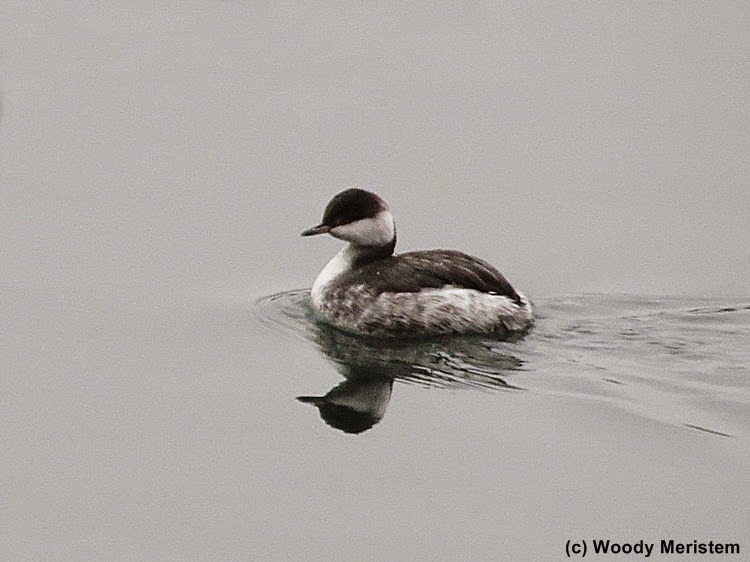 And further out in the river was a lone female lesser scaup – even the normal white at the base of the bill was drab, hardly noticeable – 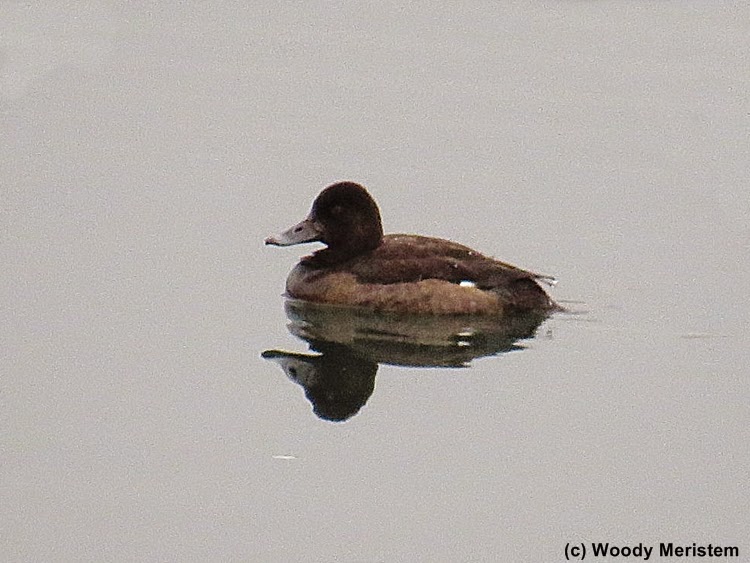 Further along, on top of the electric transmission tower where I’ve seen and photographed them before, were two adult bald eagles. Hardly anyone would describe adult bald eagles as drab, certainly not me. But who could deny that the eagles’ predominant colors are brown and white? 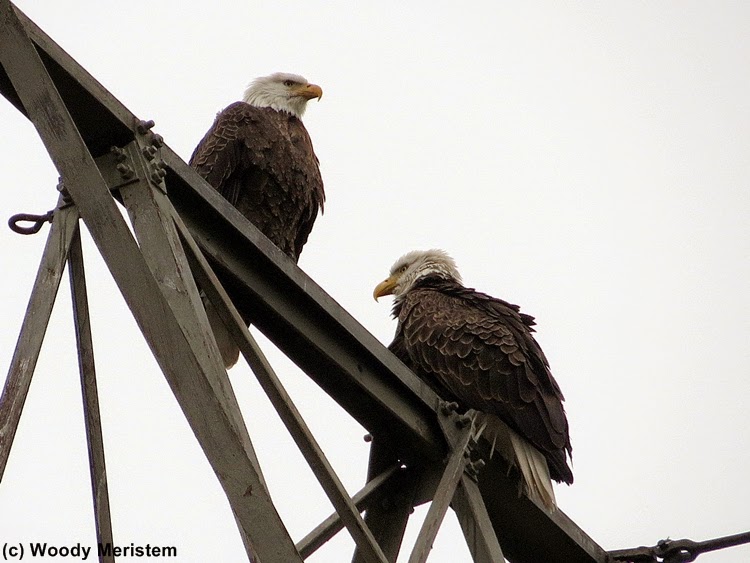 Last but far from the least of the birds along the river this day, in a tree near the tree where one or both of the resident birds frequently perch, was the male peregrine falcon. The falcon’s crop was bulged a bit, probably by one of the many pigeons that frequent the nearby bridge – 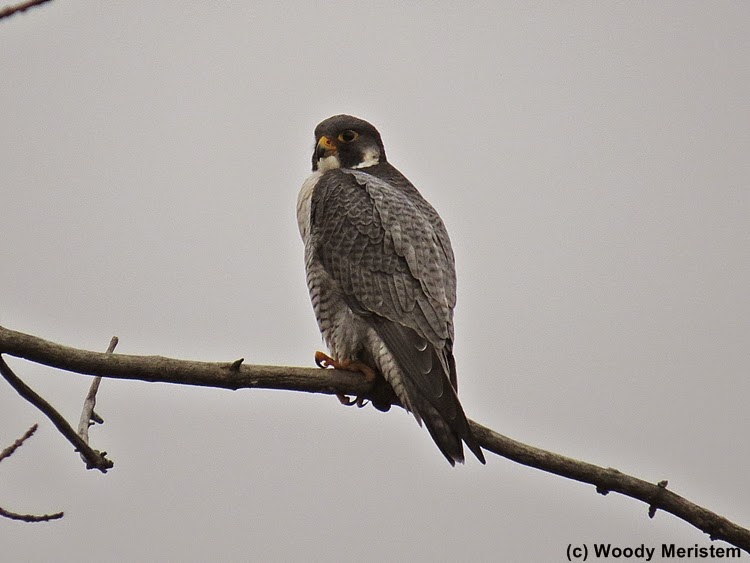 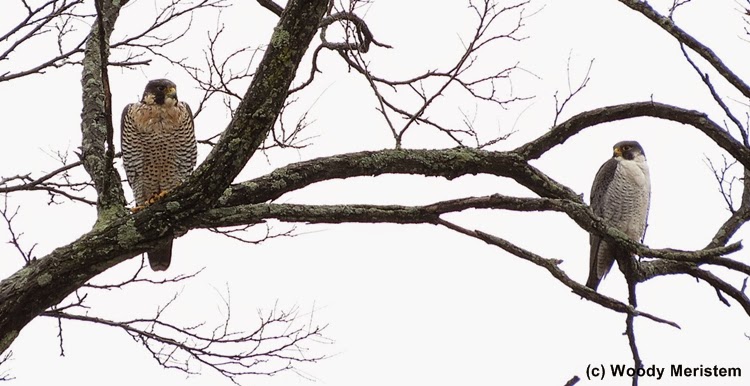 It may have been a gray day, and the birds may have been gray and brown with some white thrown in, but the walk turned out to be anything but drab.

Posted by Woody Meristem at 8:47 AM No comments: