This was a year of an extremely bountiful apple crop and we harvested enough for many loaves of apple bread and lots of containers of apple sauce as well as apples for lunch and snacks. The apple growers in the area and beyond also had plentiful harvests.

As autumn advanced farmers harvested their soybean and corn crops; squirrels and chipmunks harvested acorns and hickory nuts to store for the winter – blue jays and black-capped chickadees also store the harvest they glean. Harvest seems a totally appropriate term for gathering the fruits and seeds that so many plants produce. 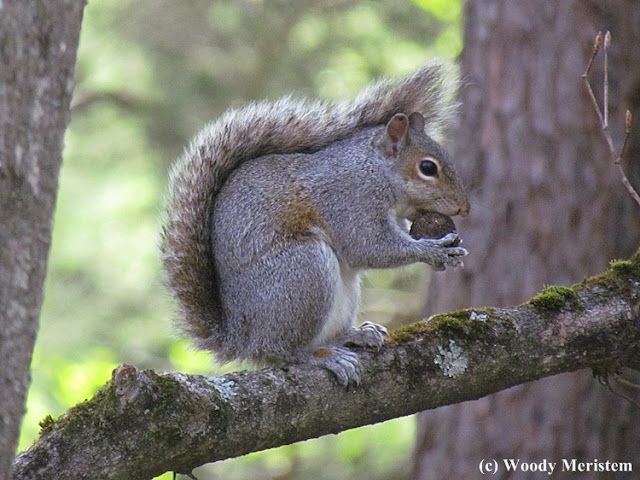 With fall comes the time for butchering the steers and hogs that folks who rear their own have been raising all summer in anticipation of steaks, roasts, ground beef and sausage. With fall also come various hunting seasons – squirrel, rabbit, grouse, turkey, bear and deer. 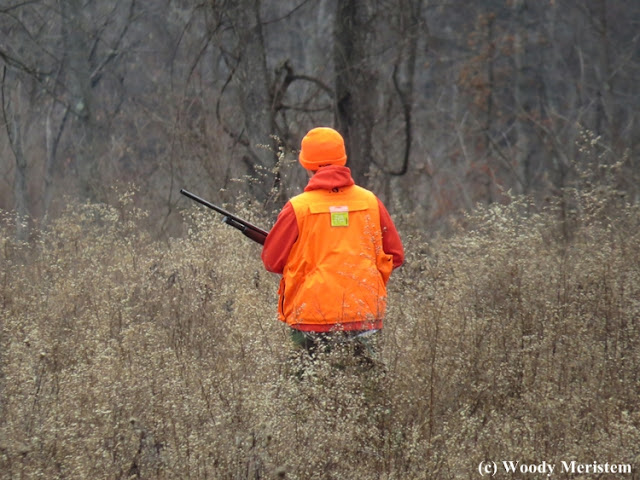 I’ve never heard anyone say that they were “harvesting” the steer in the pasture or the hog in the pen. But for some reason in the last few years the hunting fraternity has increasingly adopted the term “harvest” to describe the killing of wild animals and birds as if the only reason for those species being on earth is to provide meat or trophies for hunters – nothing could be further from the truth. Anyone reading hunting-oriented magazines sees “harvest” used many, many times in relation to hunters killing their quarry. Earlier this year an issue of one magazine used “harvest” nine times in a short two-page article.

And so, I’ve come to think of “harvest” as a slick euphemism; euphemism is defined as: a mild or pleasant word or phrase that is used instead of one that is unpleasant or offensive.

“Harvest” has become the euphemism for the killing of wildlife during hunting season. Why? Is it to make the act of killing more acceptable to non-hunters or anti-hunters? Is it to make it less wrenching to hunters themselves? Calling it by another name doesn’t change the fact that a living creature that feels pain, typically cares for its offspring and, in many cases, appears capable of conscious thought, has been slain. 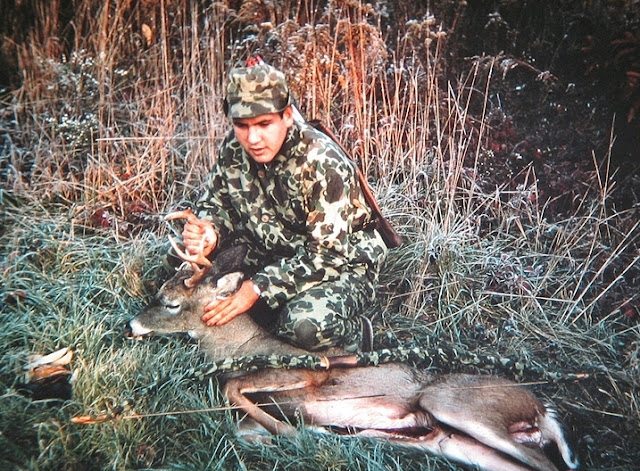 Having watched the life drain from an animal I’ve killed (for whatever reason) has never been without a twinge of … regret, sadness, remorse – I can’t put a name on it, but I’ve always felt it. Killing a deer or grouse isn’t the same as picking a blueberry or plucking an apple from a branch. No matter what the hunting magazines or wildlife agencies may call it, it’s not a “harvest”. 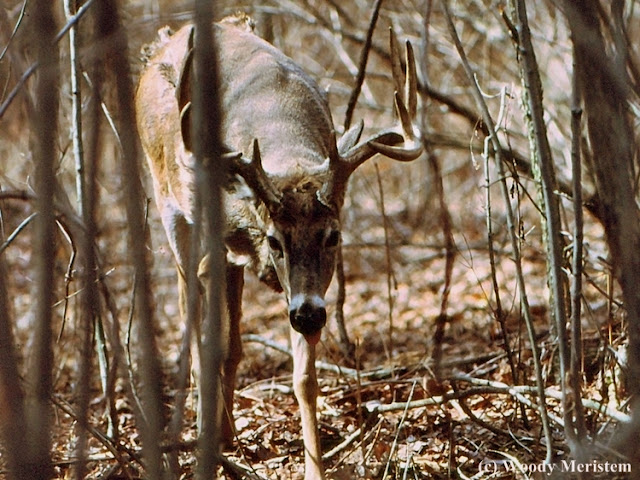 Posted by Woody Meristem at 3:17 AM No comments:


In November of 2013 the camera traps above the house captured photos of a male white-tailed deer with very distinctive antlers – two of the antlers’ largest tines had small tines on their side.
November 2013 – 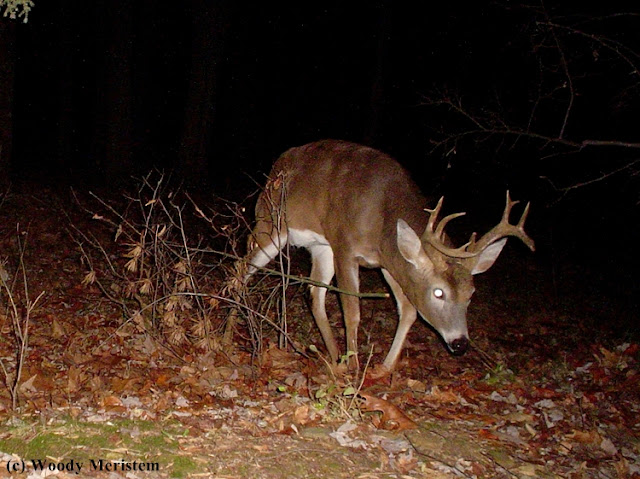 The buck appeared on camera again in January 2014 – twice in one week. He had an obvious injury high on his left front leg, dragging the leg which seemingly couldn’t bear much weight; presumably he had been hit by a vehicle or wounded by a poacher or during a previous hunting season. Photos of the buck at that time were posted here and here. In looking at those earlier photos of him, it seems that the leg might even have been injured before November 2013.
January 2014 – 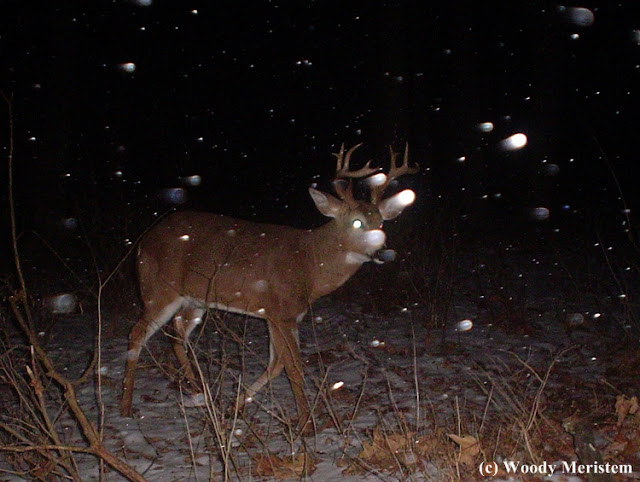 The buck then disappeared and we concluded that he hadn’t survived the winter. But, almost a full year later, in February 2015 he reappeared without those distinctive antlers which he had shed. With the cold and snow of winter, and still walking with difficulty, we again felt that he wouldn’t live until spring.
February 2015 – 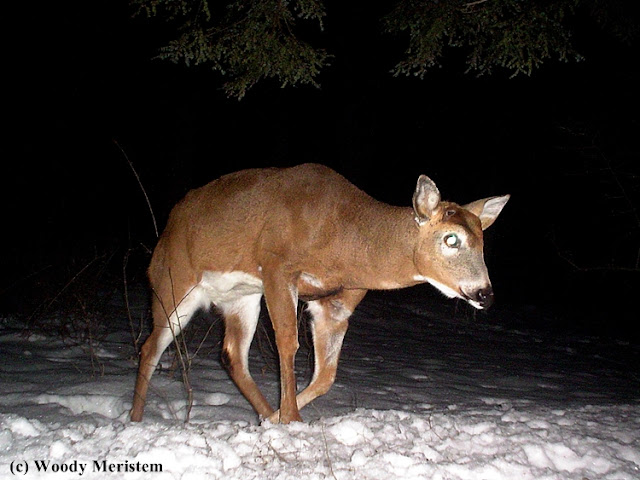 The camera traps didn’t get any photographs of the buck during the spring and summer this year – they hadn’t gotten spring or summer photos in 2013 or 2014 either. Had he succumbed to the winter? The winter, which was colder with more, and longer lasting snow, on the ground than in recent years.

But then in early November he reappeared again. Now those distinctive antlers are thicker than in previous years – as is normal as bucks reach their prime. Again, there are small secondary tines on his antlers.
November 2015 – 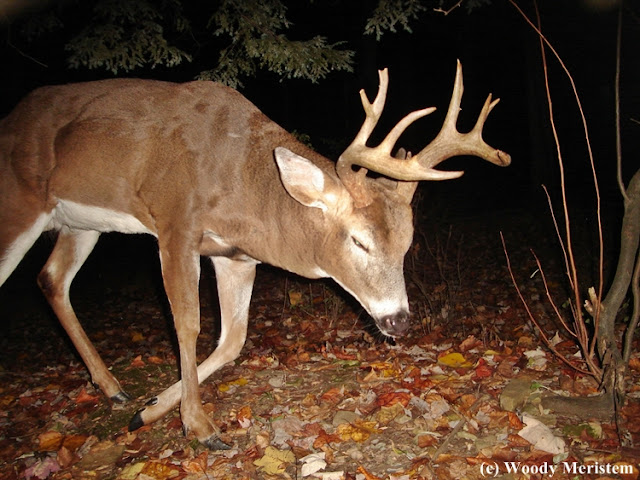 The injured leg is in roughly the same position in each of the photos as he drags it along, a result of the injury. He would have real problems whenever snow accumulates to much depth - how has he survived the winters?  Where does the buck spend the warmer months and how far does he travel? How does the buck manage to escape the deer-chasing dogs, the coyotes and the hunters who roam the woodland each fall?
Posted by Woody Meristem at 4:46 AM 6 comments:


Occasionally I walk around on an old farm that was last cultivated during World War II. Along one of the old stonerows there grows a row of contorted, tangled, short trees – a row of Osage-orange trees. 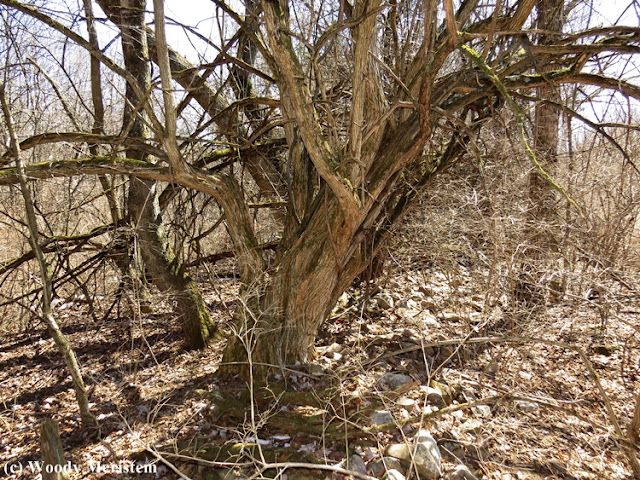 Osage-orange isn’t native to Pennsylvania; historically it was only found in southern Arkansas, southern Oklahoma and northeastern Texas. However, the species was once widely planted as a hedge or living fence. The small branches usually have one-inch long, sharp thorns that deter passage by livestock – and humans. The wood is also resistant to decay and very hard, so trees were also planted as a source of fenceposts. 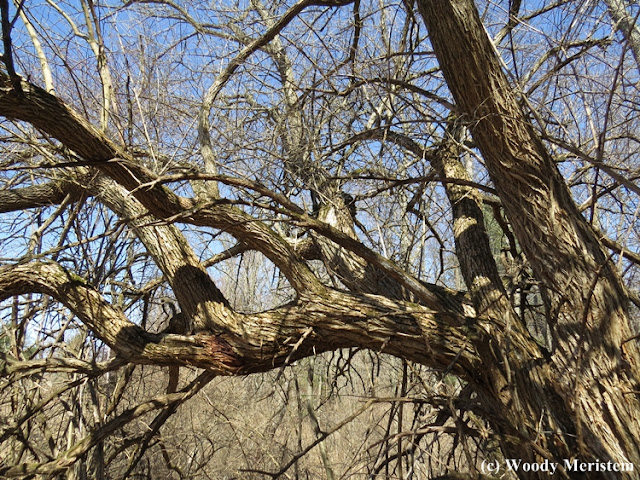 The tree’s most common name refers to its fruit which, although inedible, somewhat resembles an orange in appearance. 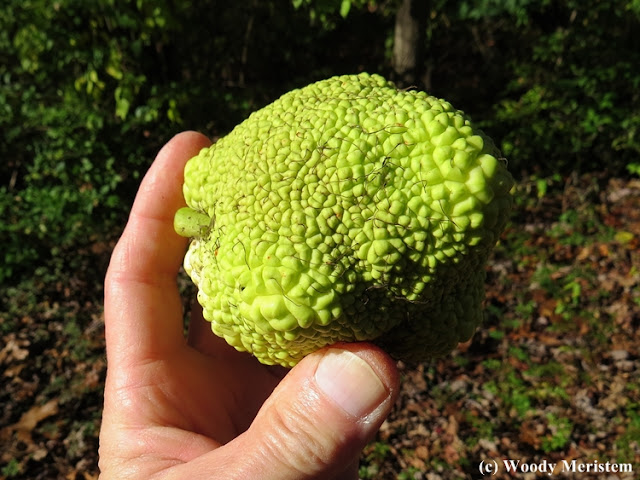 But this is a tree of many names:  hedge apple (since it was planted as a hedge and, to people who had never seen an orange, the green fruit was thought to resemble an apple), horse apple (since horses are one of the few animals that eat the fruit), bois d'arc (the wood was a favorite of Native Americans for making bows), and bodoc and bodark (derived from the French bois d’arc).


There is some thought that the tree was more widespread in the distant past and that the large mammals, which became extinct at about the same time as humans arrived in North America, fed on the tree’s fruit and thus dispersed the seeds.

The leaves are rather plain with smooth edges, glossy dark green in summer, turning a drab pale yellow in the fall. 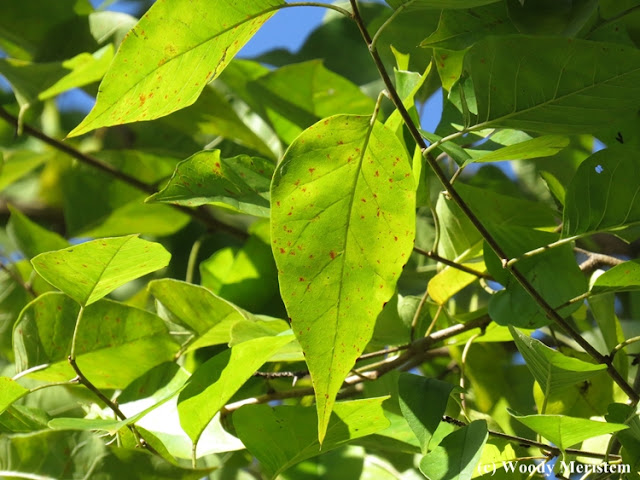 In all my wandering in northcentral Pennsylvania I’ve only found a few locations where Osage-orange grows, and those all appeared to be planted trees. From one of those spots, years ago I picked up a dead limb and used that to fashion the tuning pegs for a dulcimer that I made for my wife. The wood is beautiful, orange with a yellow cast when fresh cut, darkening to a rich dark brown with age – but it’s so hard that it rapidly dulls ordinary steel tools. 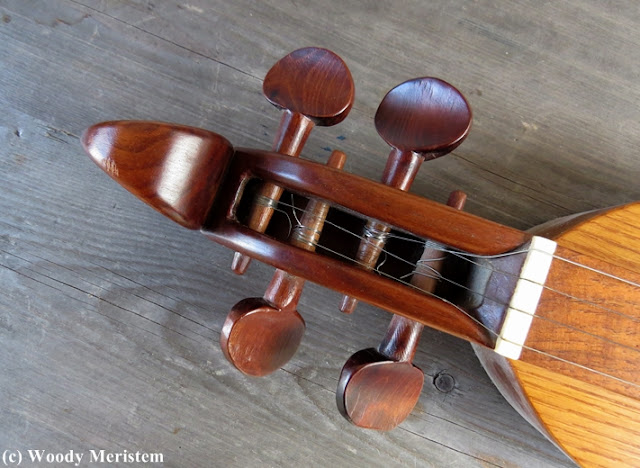 Posted by Woody Meristem at 4:48 AM 2 comments:


Except for one lone apple high in the tree, all the apples have fallen from the tree (they’re not a long-hanging variety). When I checked the camera trap there were photographs of wildlife that had come to eat the last of the fallen fruit.

The most interesting were a series of photos of a bit of a confrontation between a gray fox and an opossum. Both species are omnivores in that they’ll eat both meat and vegetable matter. Although gray fox eat a lot of fruit, they tend to be more predators in that they actively hunt insects, small mammals and birds. 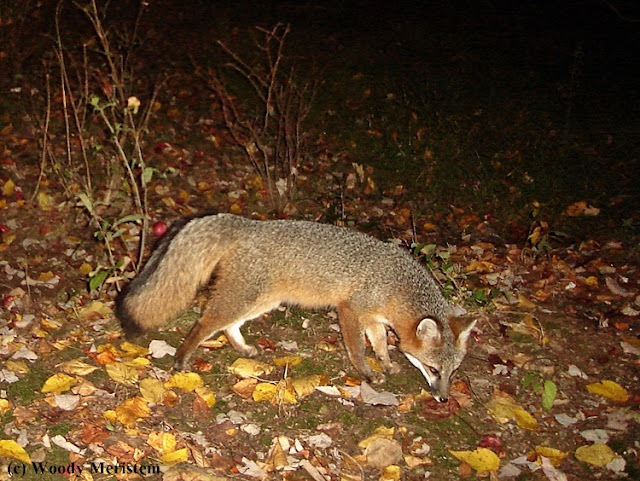 Opossums, on the other hand, eat a lot of carrion that they find – although, if they can catch them, they will kill and eat the same insects, mammals and birds as they gray fox. 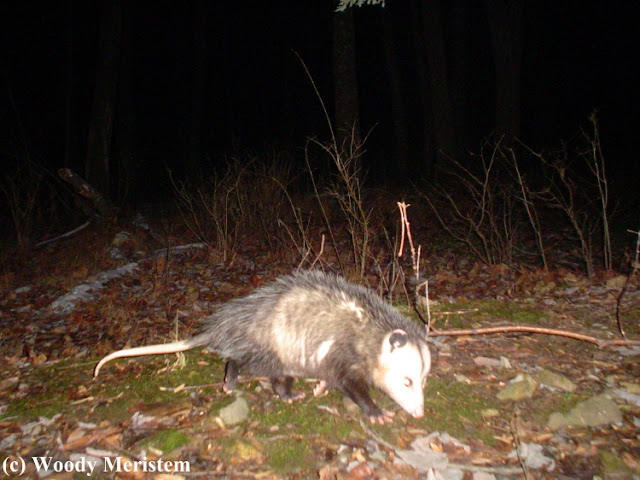 The two species tend to be about the same weight, but the fox is by far the faster and has a more aggressive personality. There were two apples and two animals when the photo series began – 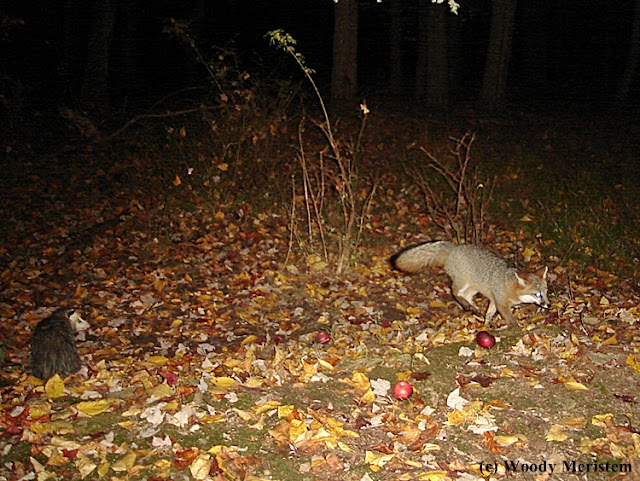 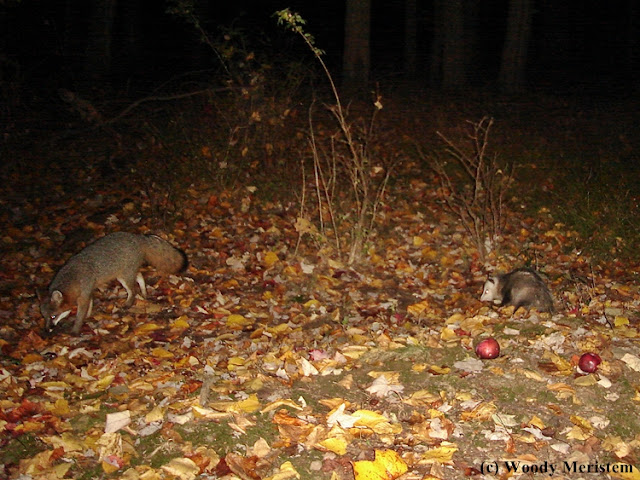 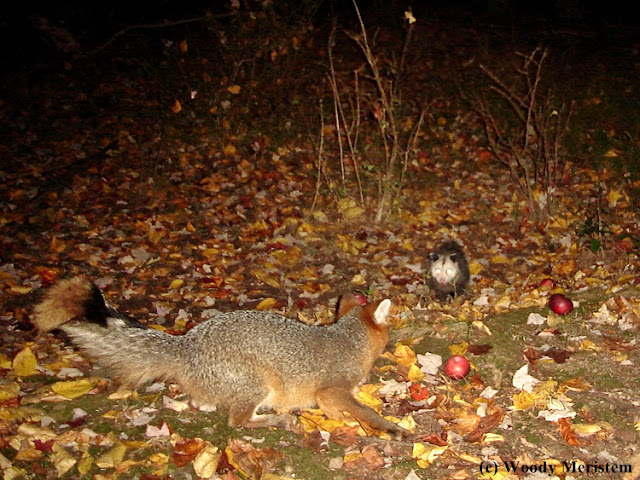 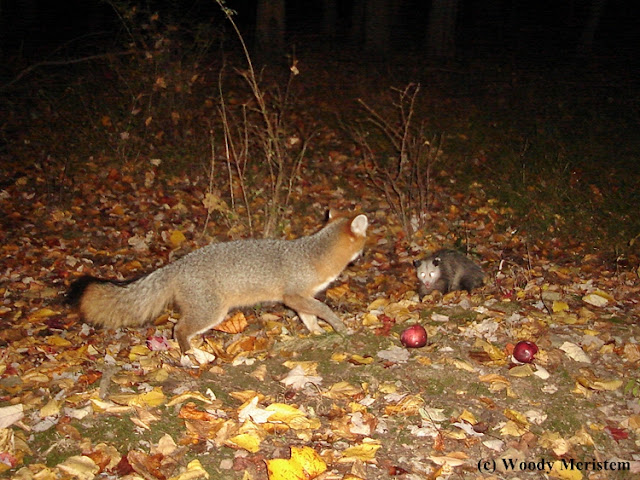 In the final two photos, first the gray fox picked up an apple and apparently carried it off – 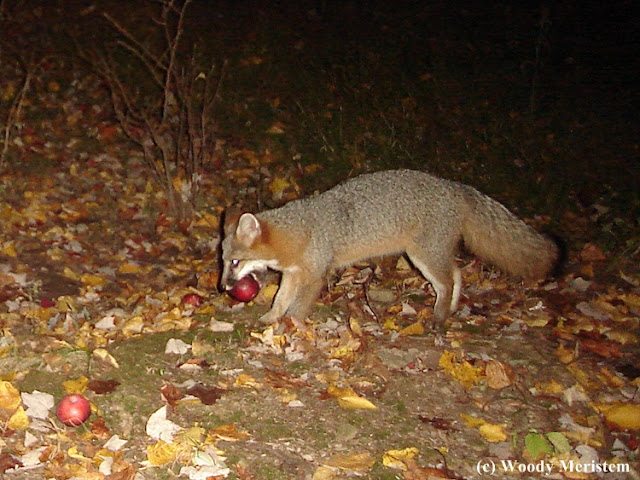 Which left the field to the opossum – 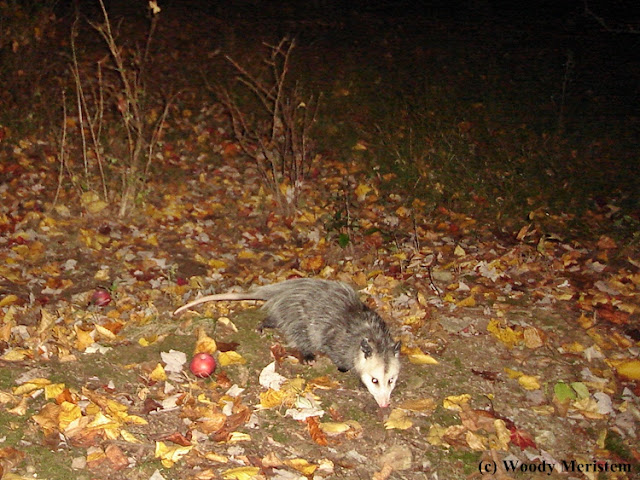 Posted by Woody Meristem at 5:01 AM 6 comments: