In both forest and field and In Forest and Field summer consists of three months – June, July and August. And so, the season of summer has come to an end in the forest where lies the big log featured in both this post and one from last year.

The red oak log has been there for many years, but one of my camera traps was there for only a few weeks last year and the three months of this summer. The camera trap would be there far longer, but a good number of hunters use the area so this camera is never in place during hunting seasons – unfortunately, not everyone is honest.

Although this is a large log, there are even larger live trees nearby. Those trees, some of which are partially hollow, offer nesting places and shelter for woodpeckers and other forest-dwelling songbirds, owls, and mammals that are dependent on tree cavities.

A number of predators prefer to travel on fallen logs – the logs provide an elevated view and, without a cover of fallen leaves, a way to move silently.

Here are the best videos from the summer –

Since there are now more people in the woods the camera has been removed, perhaps I'll put it back at the log again next summer.

My grandfather called them “chippies”, a coworker called them “grinnies” – chippies for the sound they make, most frequently in the fall; grinnies because they so often make you smile. They're eastern chipmunks, one of the most abundant mammals east of the Great Plains. 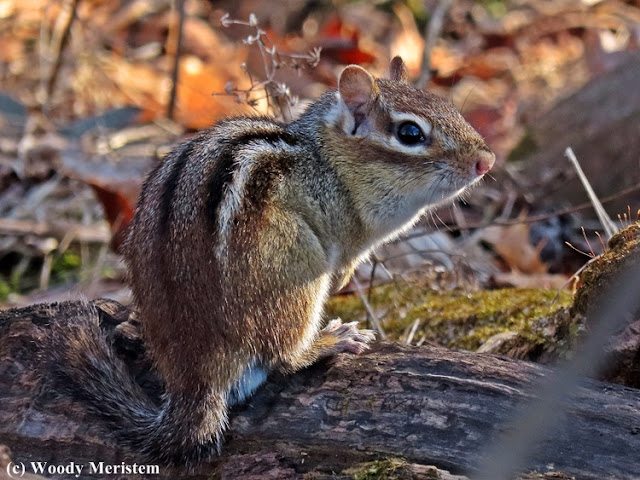 And they do make us smile; with their reddish fur set off by five dark stripes on the back and sides and two light strips between the dark stripes on the sides, they're attractive – many would say cute – animals; although they live in underground burrows, they're active in daylight so we see them frequently; their tendency to use elevated places from which they have a wide-ranging view makes them even more visible. 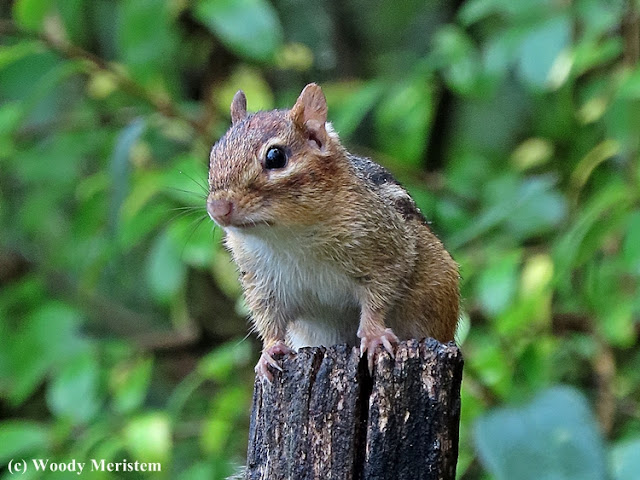 Since chipmunks prefer forest edges, they're often abundant in wooded suburbs. Wherever chipmunks live, they favor forested hillsides, piles of rocks, stone walls, log piles, fallen trees and other areas where they can find refuge from predators and excavate their long burrows which include storage, sleeping and toilet chambers. 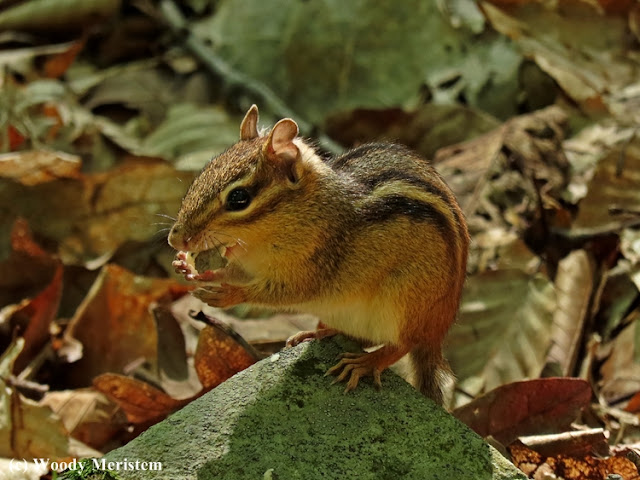 Chipmunks typically mate twice a year and give birth in April and July. When the young are nine or ten weeks old the female drives them from her territory and they have to find their own way in the world.


Nuts, berries, seeds, insects, birds' eggs and nestlings and earthworms are their normal diet – many years ago I photographed (poorly) a chipmunk eating the flesh from the head of a newborn rabbit – 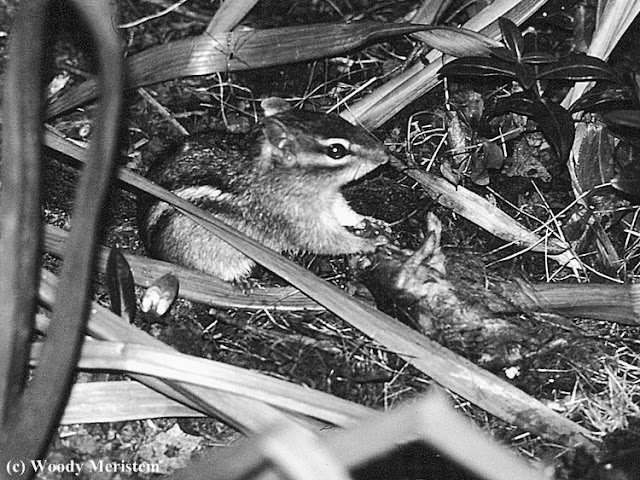 Although chipmunks normally spend the winter sleeping in their underground burrows, they do periodically awake to eat from the stockpile of stored food that they had gathered during warm weather. If they run short of food or during warm periods they will emerge from their burrows – 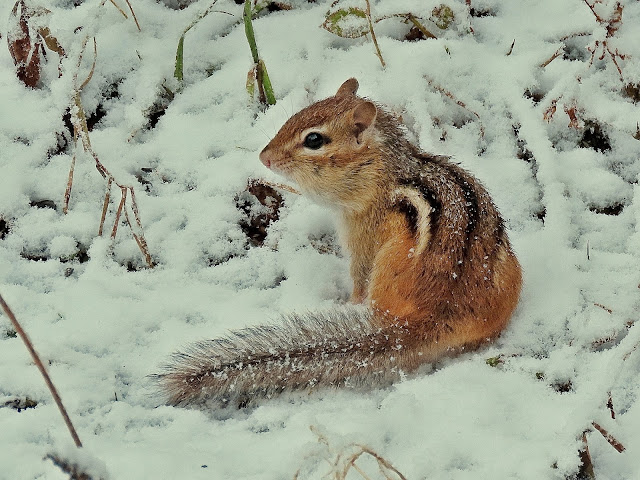 Although these small mammals have a whole repertoire of calls, including warning calls about aerial predators and a different call for ground predators, the autumnal calls are thought to be territorial calls to warn other chipmunks away from the resident's burrow with its food stockpile.
They go on chipping and making us smile with their antics, earning the nick-names of Chippy and Grinny.
Posted by Woody Meristem at 3:05 AM 9 comments:

The Hole in Summer

If you're a regular visitor to In Forest and Field, you may recall previous posts in which a shallow hole appeared in the clearing where one of my camera traps has been mounted on a tree for several years. When the camera was first put in place there was no depression in this open spot in a long-abandoned field now reverted to forest. In 2017 a depression developed, which has since become a hole.

The hole began after an eastern coyote urinated in the center of the clearing and other mammals were apparently attracted to the odor and began to do the same. What was originally a depression merely an inch or so deep has now become a hole about 6-8 inches deep and more than a foot in diameter. The camera has occasionally captured photos or videos of active digging, every little bit has added up to a substantial pit.

Visit these posts to see earlier activity at the hole – here and here.

How deep will it go? Only the future will tell.
Posted by Woody Meristem at 7:01 PM 8 comments:

September is the first month of meteorological fall and, with leaves beginning to change color and birds beginning to migrate, it's obviously now also biological fall as well. A Naturalist's Year is the current photo-a-day-for-a-year project; it's been broken into quarters by month. The year's quarters don't follow either the meteorological or astronomical seasons, so it's not yet time to post the photos from the year's third quarter.


Here are some of those photos: from June, July and August – meteorological and biological summer – 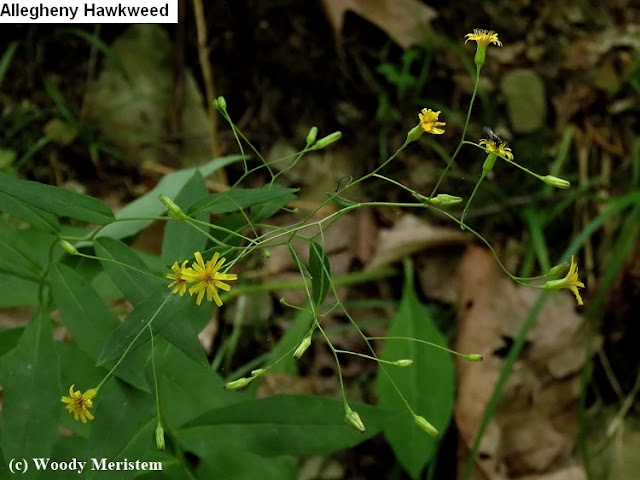 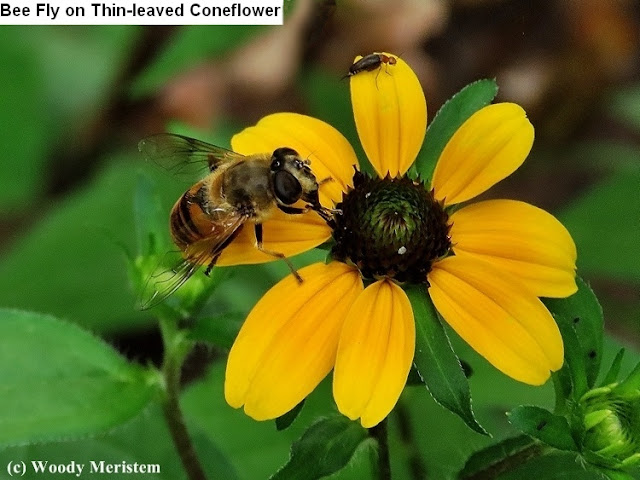 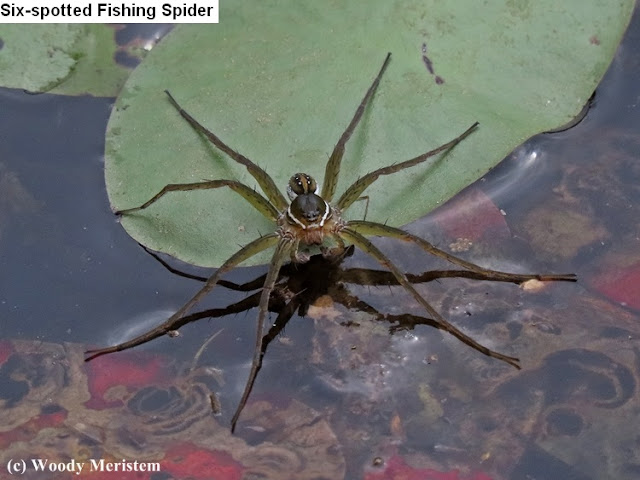 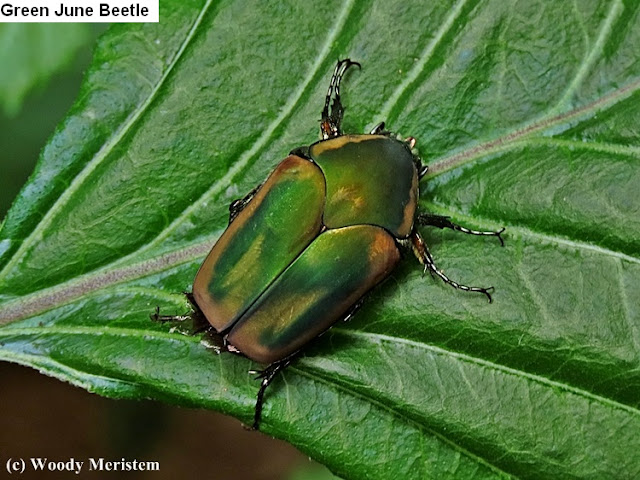 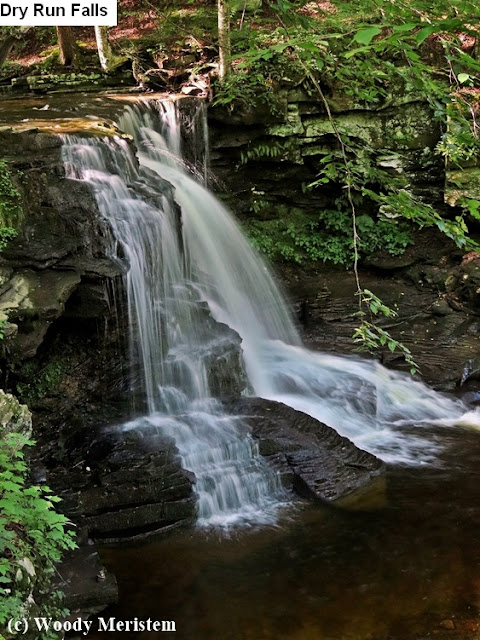 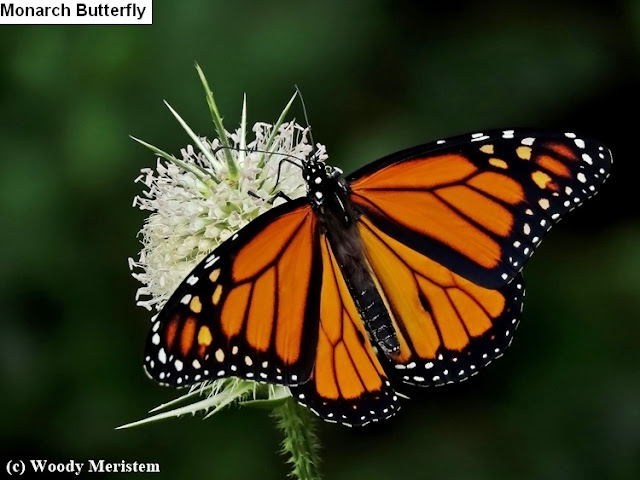 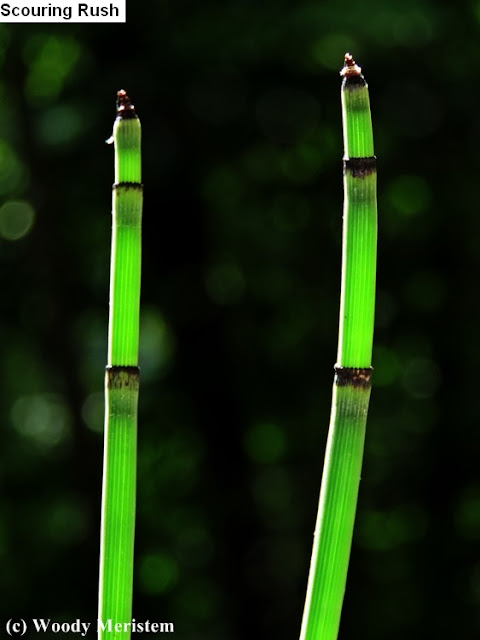 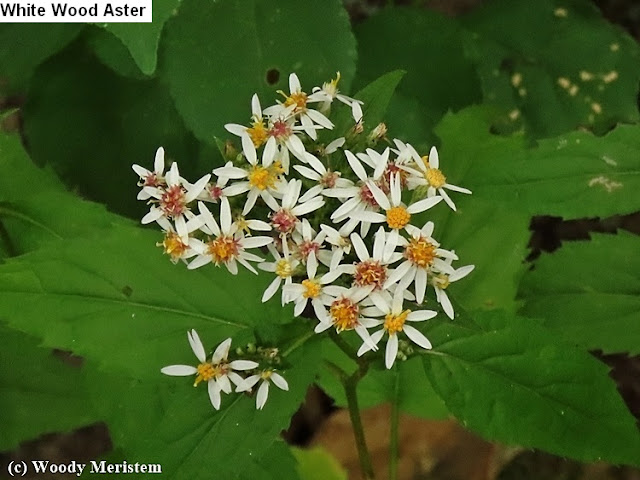 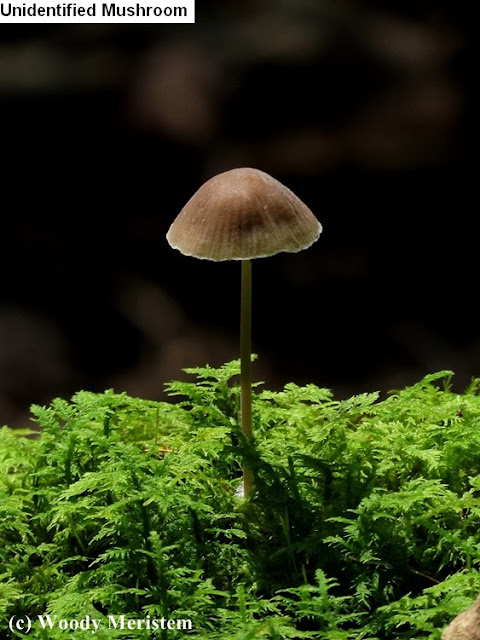 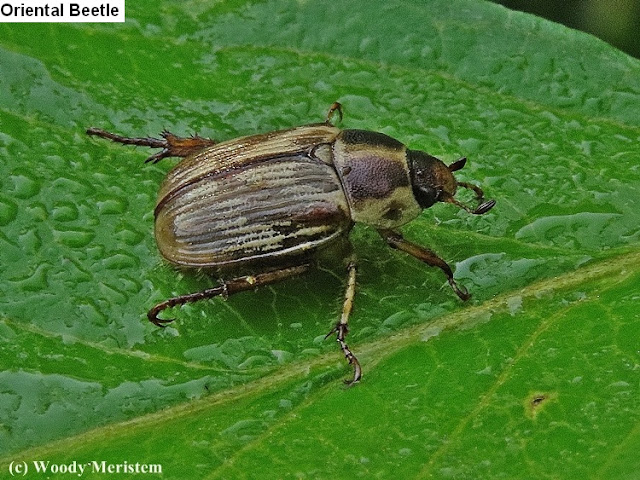 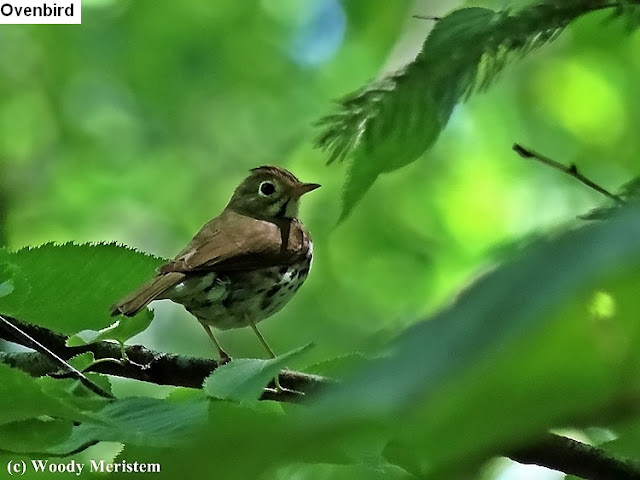 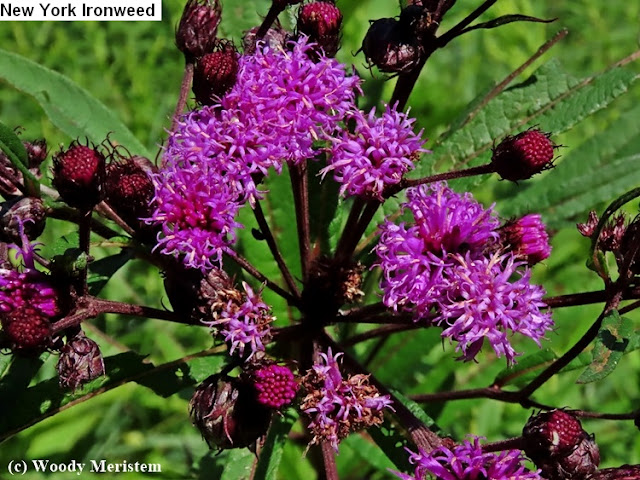 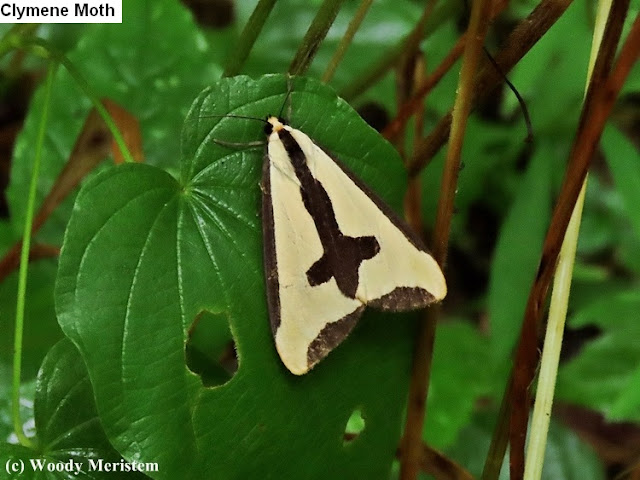 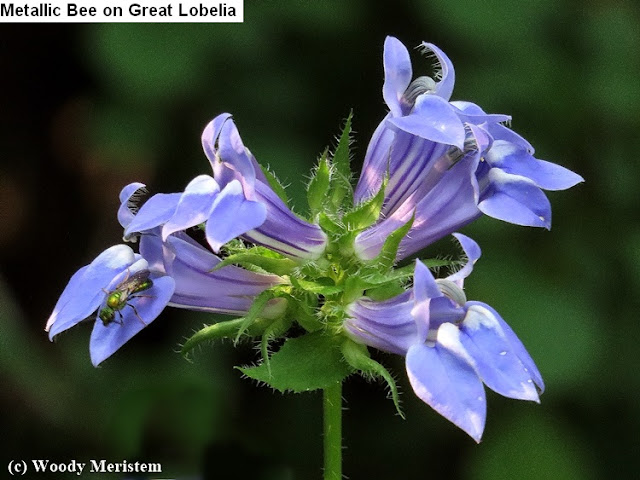 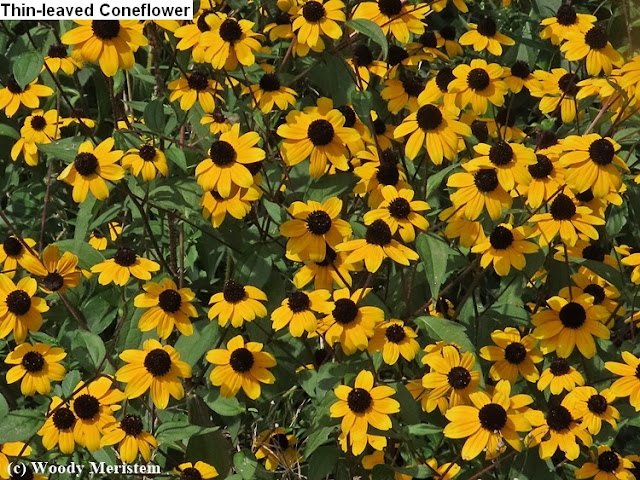 The first post in October will bring a photo from each day of the year's third quarter – stay tuned.
Posted by Woody Meristem at 3:52 PM 6 comments:

Summer at the Bear Wallow

The summer of 2020 was hot and dry in northcentral Pennsylvania, temperatures regularly in the 90s (F) and rain infrequent. And so, the seasonal (vernal) pools in the Big Woods rapidly shrank, many of the smaller ones drying completely. But while the pool I call the bear wallow didn't dry fully, it quickly became smaller and shallower. Nonetheless, it still had a lot of visitors – although the black bears that usually make frequent appearances were notably scarce. One male bear luxuriated in the water on two consecutive days, the videos are almost, but not quite, identical.

The last time the camera trap was checked in August it was turned sideways on the tree to which it was mounted – typical of bear work. The bear must have wanted to bathe in private since the video taken as it was being turned showed only an out-of-focus large black paw wrapping around the camera.

The end of August marks the end of summer as fall begins to arrive in September with cooler temperatures and more abundant rainfall – at least I hope it will be that way. Summer videos from the bear wallow include two species that have never before been caught by the camera at the bear wallow – red-tailed hawk and bobcat – as well as a pair of eastern coyotes: a black male and blond female.

Here they are, the best of the summer's videos from the bear wallow –


The plan is to leave the camera in place until mid-October, we'll see what shows up.