It was late morning in the Big Woods a couple of days before Thanksgiving and I was walking along an old road looking for subjects to photograph. Then, off to the side, about 125 feet away, a bear was laying in a small depression beneath a shagbark hickory tree feasting on fallen nuts that had rolled into the depression. 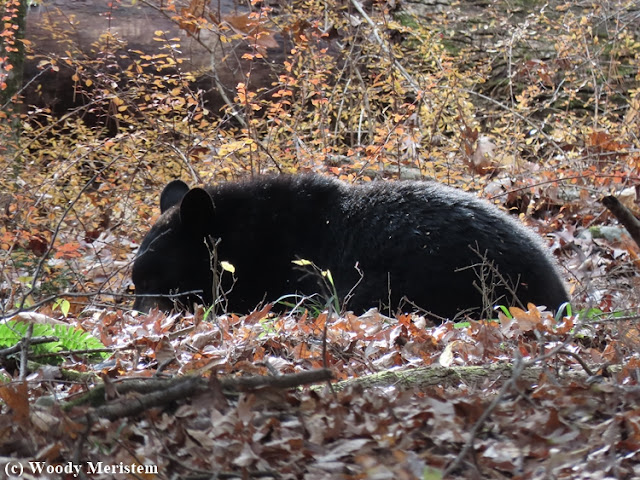 Shagbark hickory produces the largest nuts of any of the hickories growing in the area, delicious I may add, and are a favorite of back bears – 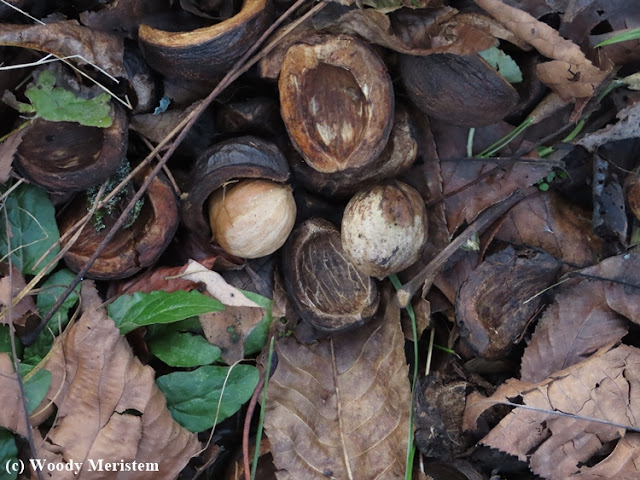 Naturally I stopped, unlimbered the camera and began photographing the bear. The camera is getting long in the tooth, at it’s expected lifespan and chose that moment to begin having trouble with a combination of both focusing and setting the correct aperture (the opening in the lens) – so the photos are far from the best. Now it will go where good cameras go to retire after years of faithful service.

Although the bear was facing away, I was standing still and the camera was silent, the bear soon became alert and began to get up and investigate a scent – mine (a bear’s sense of smell has been estimated to be about 2,500 times better than a human’s). 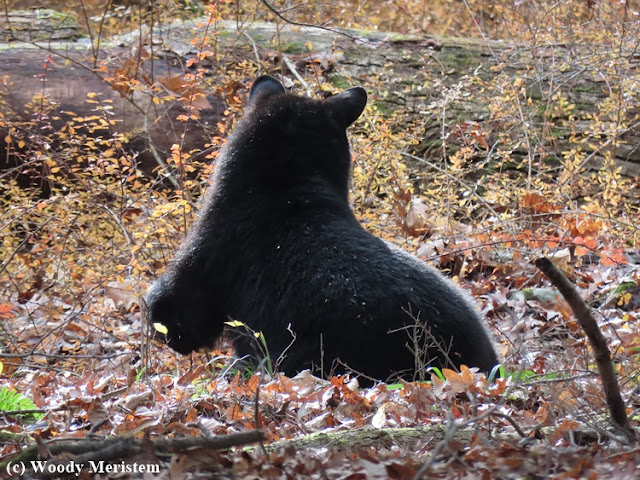 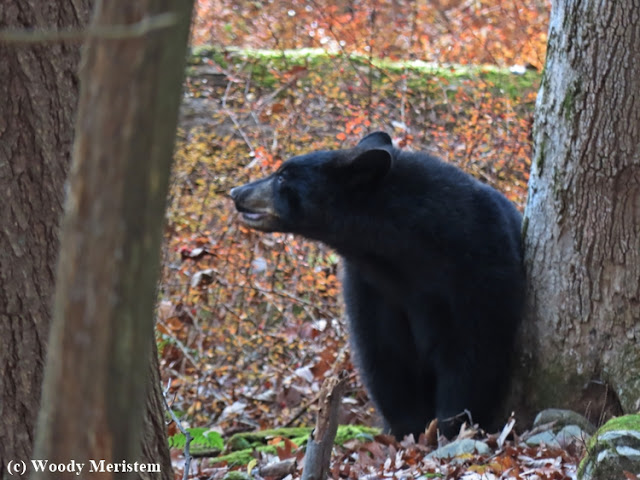 It walked over to a nearby tree and looked as if it was going to climb the tree, but didn’t – 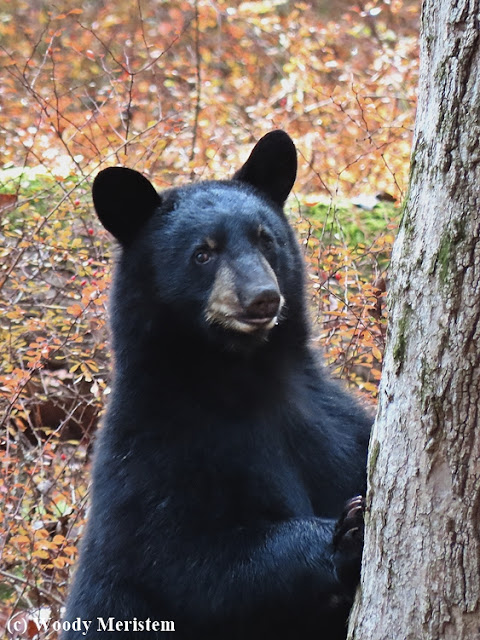 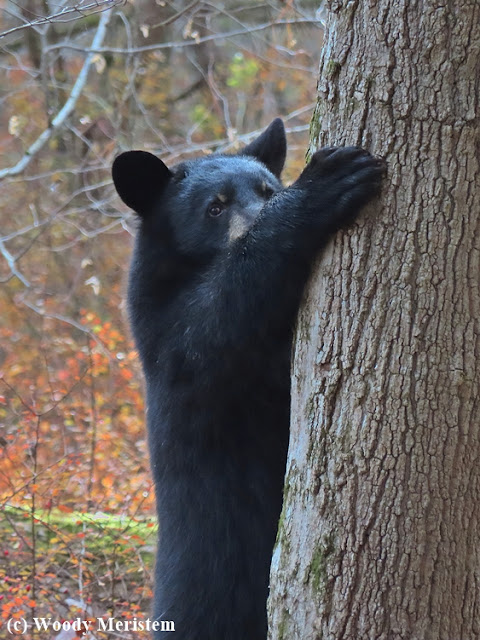 Instead, after taking a couple of steps, the bear sat down looking in my direction for about a minute – 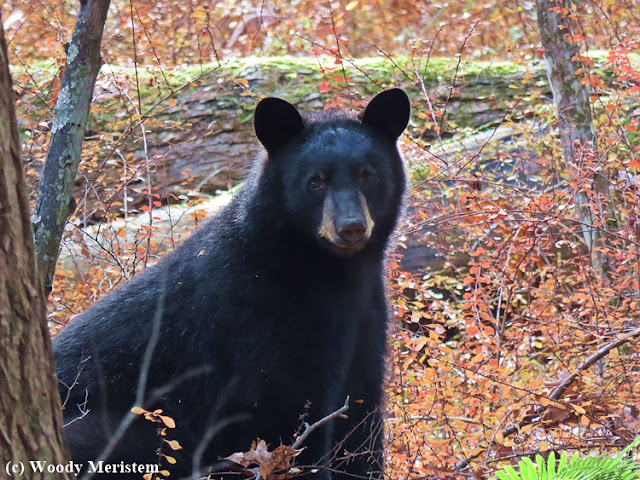 Although bears’ eyesight is not particularly good and I hadn’t moved, it was obvious the bear knew I was there. After several minutes the bear turned, climbed onto and over a fallen log and walked away – 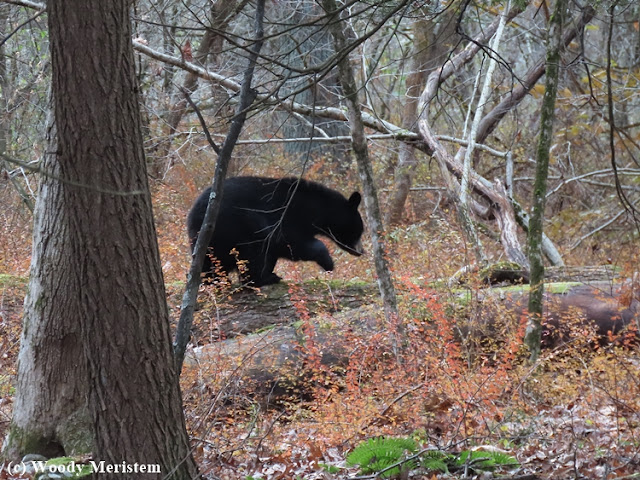 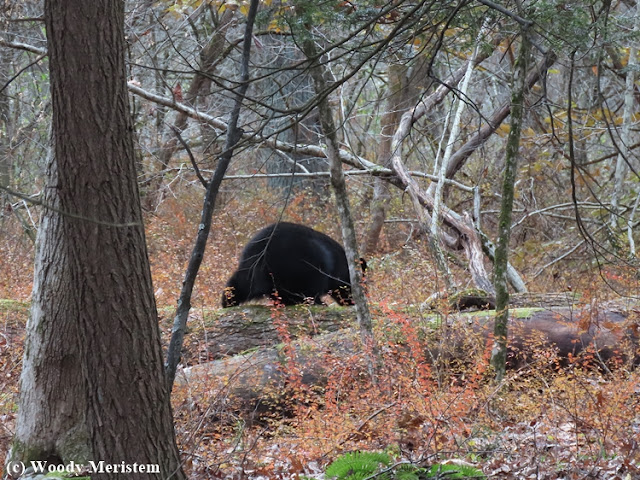 You may ask if I was frightened by being that close to a wild bear – the answer is a resounding NO! Over the last 60 years I’ve probably encountered somewhere between 200 and 250 black bears in the wild including many females with cubs, only two have given me any cause for concern.

As the bear went out of sight I continued my walk on the old road, taking other photographs along the way – 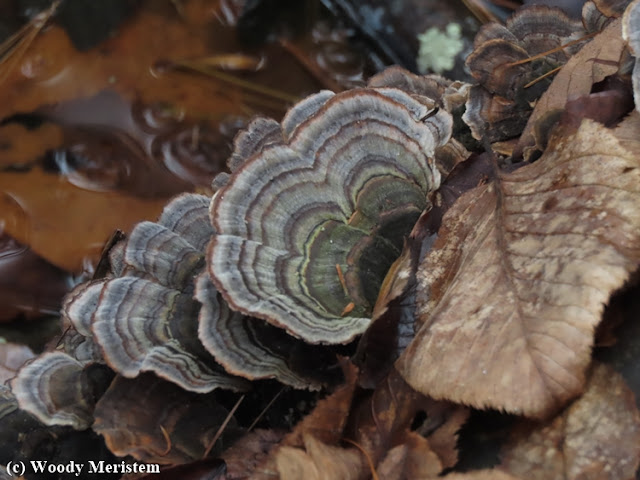 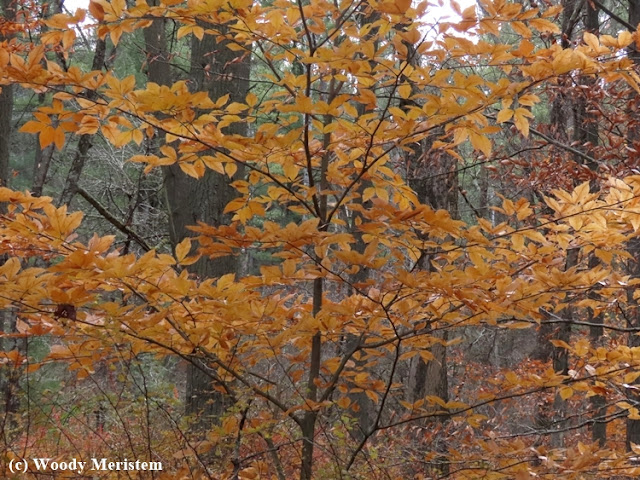 The day was in the midst of Pennsylvania’s several bear seasons so this young bear may not survive, indeed it may be dead by the time you read this. On the day I saw the bear approximately 1,400 bears and one human had been killed during bear season by hunters in Pennsylvania.

Addendum - as of December first  3,318 bears had been killed during Pennsylvania's various hunting seasons which were not yet over.

Posted by Woody Meristem at 7:22 AM

You got some great photos and had a great experience!

Isn't that a lot of bears to be shot in one season? Unlike many of the rest of us you knew what to do when you spotted the bear.

What a beautiful moment!
I had a similar encounter years ago, but it smelled me, I shuffled in the leaves moving back out of the way, and he roared off!

Wonderful series of bear photos. !,400 bear were shot, that seems like a lot, to me. Thank you for linking up and sharing your post. Take care, have a happy weekend!

You got some really great photos of this beautiful bear. And I know they are not to be feared but I still wonder if I'll be able to stand still and photograph one when I see it. Yesterday we were in the forest and another hiked had just seen one so it's just a matter of time. I'll remember what you said! Or at least....I'll try! heehee!