A couple of weeks ago I walked through the largest patch of wild bergamot (Monarda fistulosa) that I’ve ever seen – it covered well over two acres of an old field that’s gradually reverting to forest. Wild bergamot is a lavender flowering species in the same genus as the more familiar bergamot called “bee balm” or “Oswego tea”. 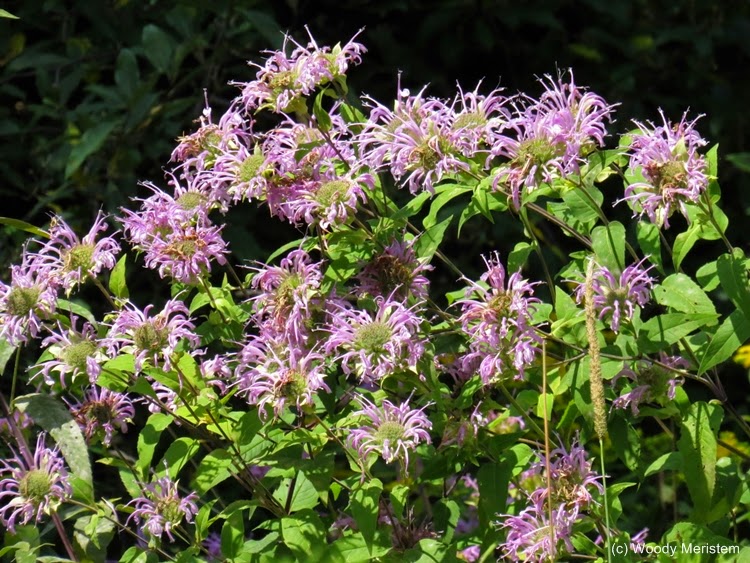 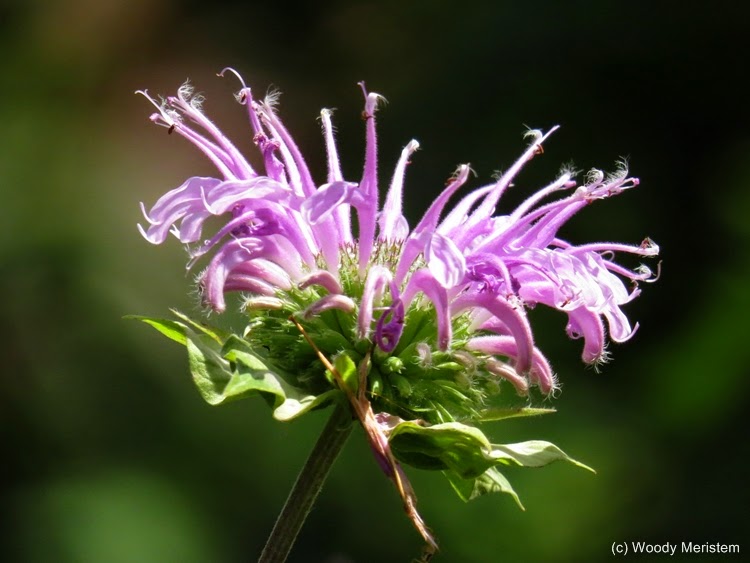 Flying rapidly from flower to flower was what at first glance could easily be mistaken for a hummingbird. But it wasn’t, it was actually an insect – a hummingbird clearwing moth (Hemaris thysbe). Except for three other closely related species, hummingbird clearwings are unlike any other moth. Most obviously, they fly by day sipping nectar from a wide variety of flowers.

The second obvious feature of these moths is their transparent wings; the center portion of both the forewings and hind wings is transparent. So much so that details of objects behind the wings can be clearly distinguished. 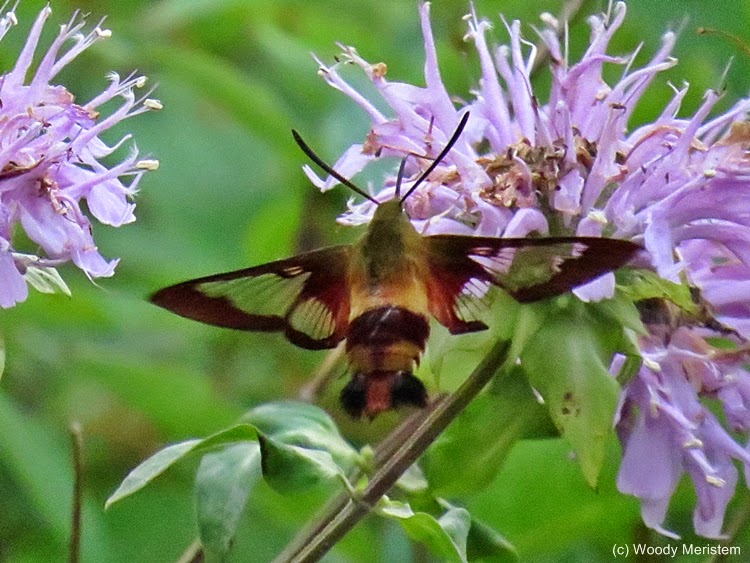 As they fly, their long proboscis is coiled, but it’s extended as they approach a flower. 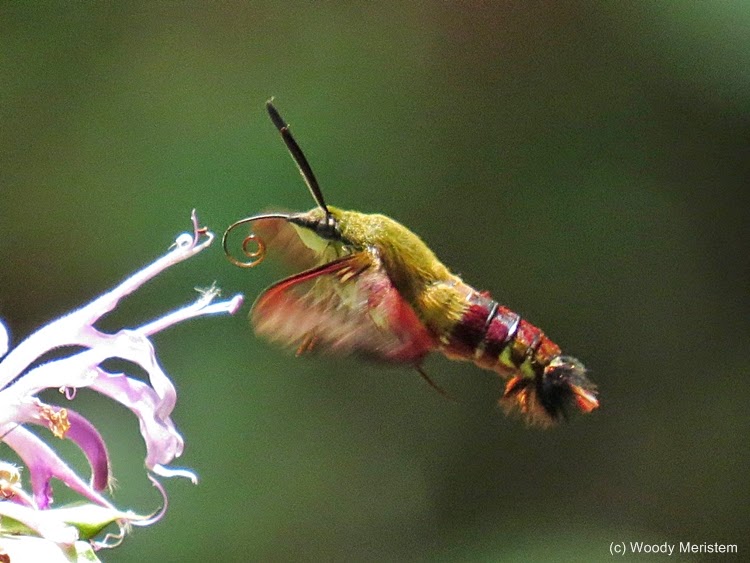 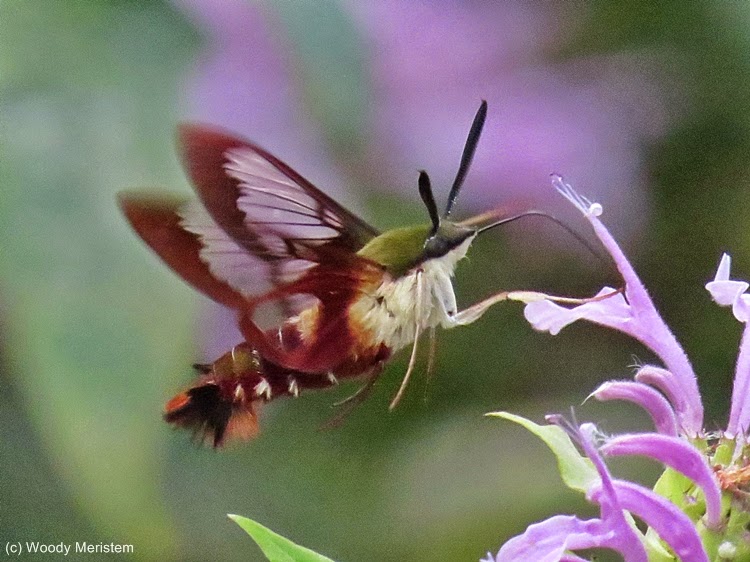 They spend only a second or two with their proboscis inserted into any individual flower, then move on to another. 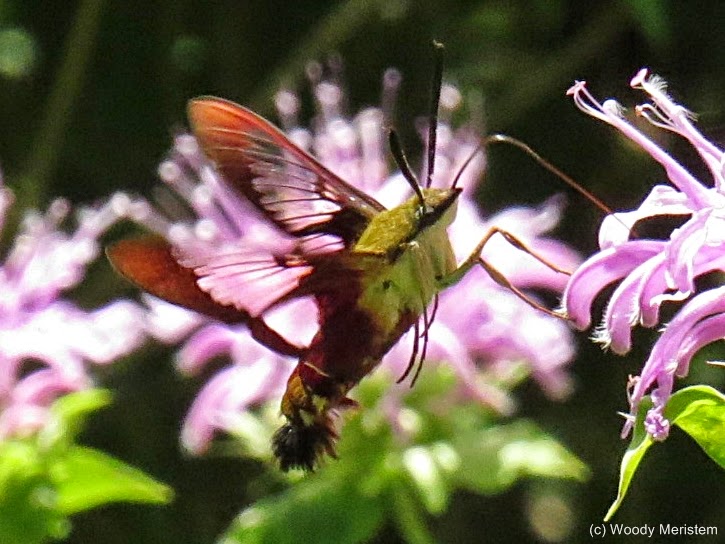 The hummingbird clearwing moth is about half the size of the ruby-throated hummingbirds that feed on the nectar of many of the same species of flowers. The large patch of wild bergamot in this old field had attracted numerous hummingbird clearwings that flew so rapidly from flower to flower that it was difficult to get a decent photograph. 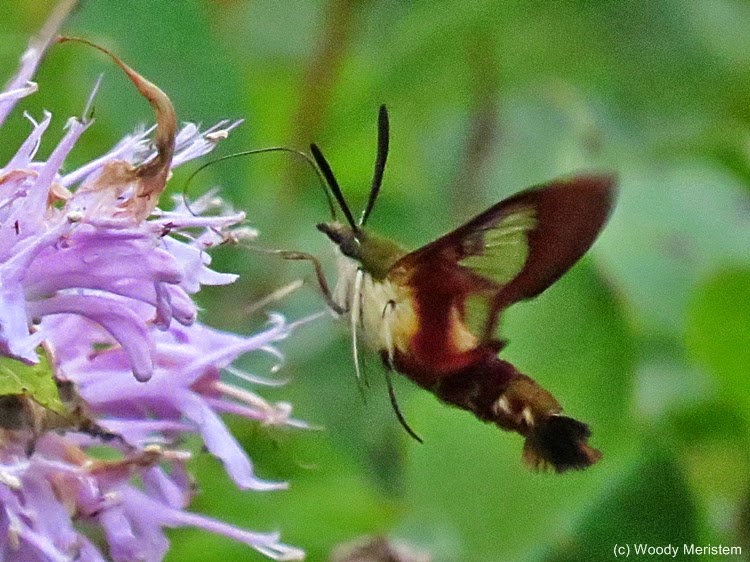 Posted by Woody Meristem at 9:55 AM 2 comments:

More From The Bear Wallow

Checked my camera trap at the bear wallow in the Big Woods and immediately noticed mud smeared all over the sensor’s lens and the glass covering the camera lens. A small piece of old bedsheet dampened with water and white vinegar is always in an old film canister in the pack to clean lenses and it really came in handy this time. Should have taken a photo of the mess, but I didn’t – too bad.
Got home and downloaded the photos, finding pictures of the lovely and gracious opossum – 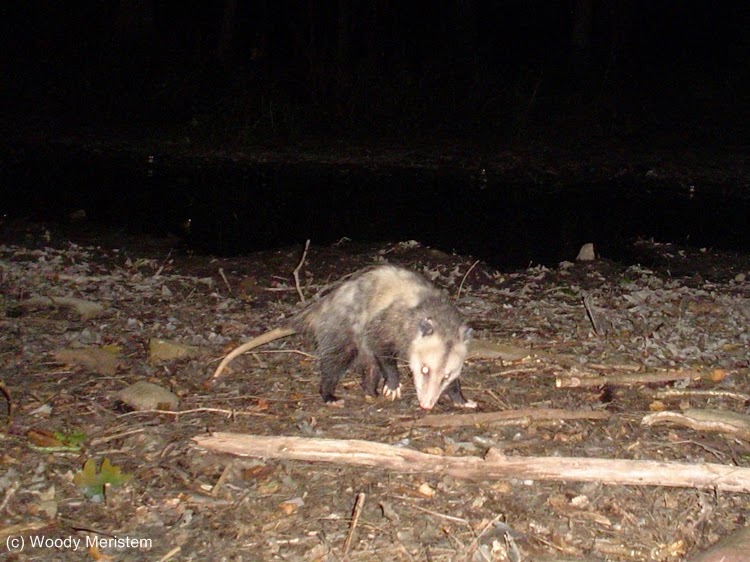 Followed by photos of a raccoon coming toward the camera – 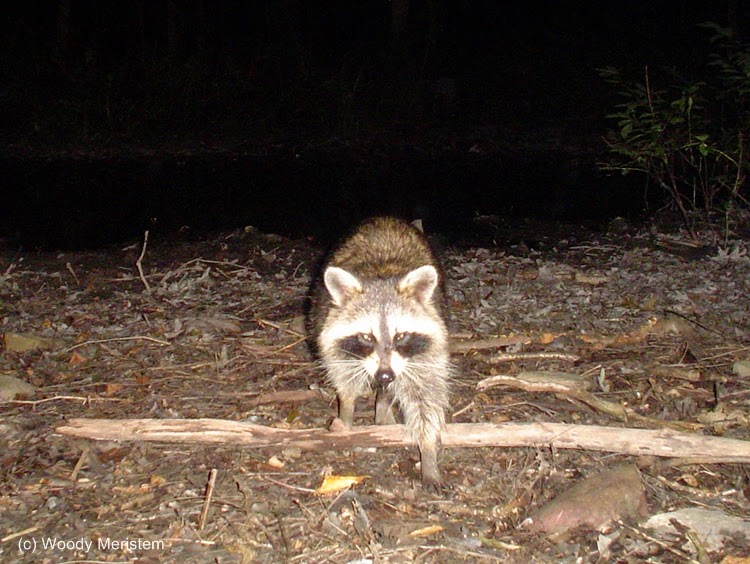 The raccoon climbed the tree holding the camera; great if you like pictures of a ‘coon’s belly. I figured the raccoon was the culprit that smeared the lenses; but the next photo, of a young buck, was taken through a clean lens – 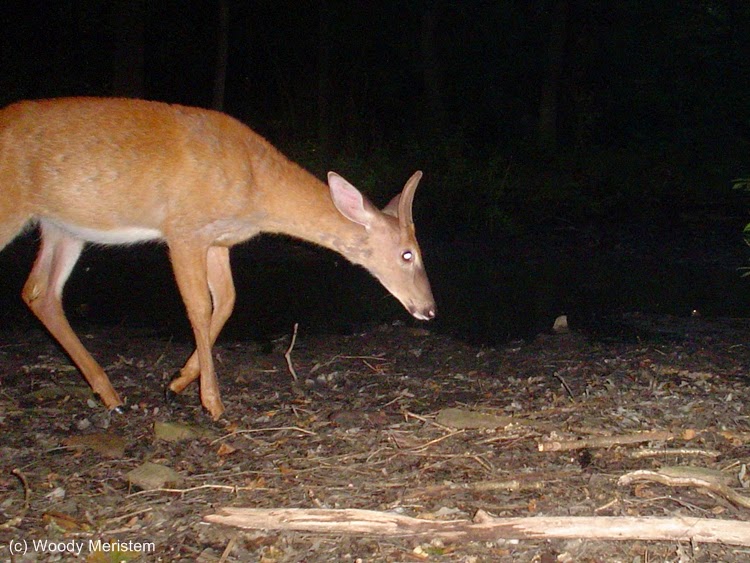 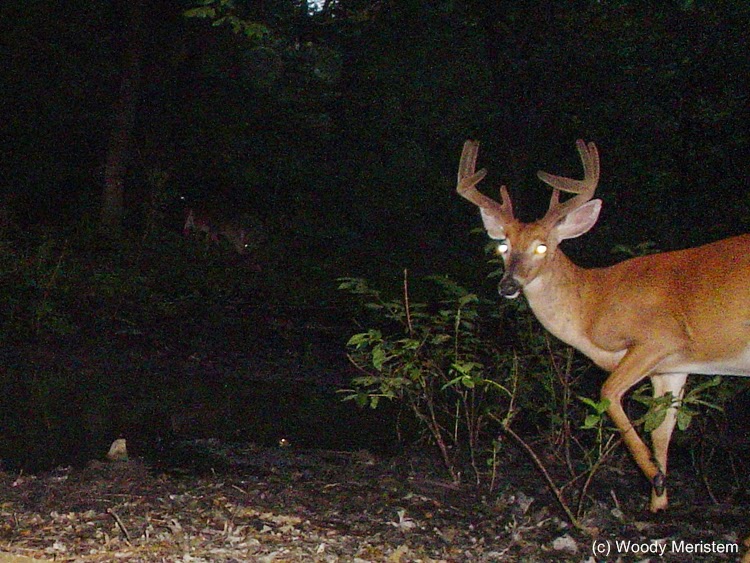 Two days later the camera captured the first photo one of my camera traps has ever gotten of a broad-winged hawk – an immature that must have been trying for one of the wood frogs that frequent the vernal pool. 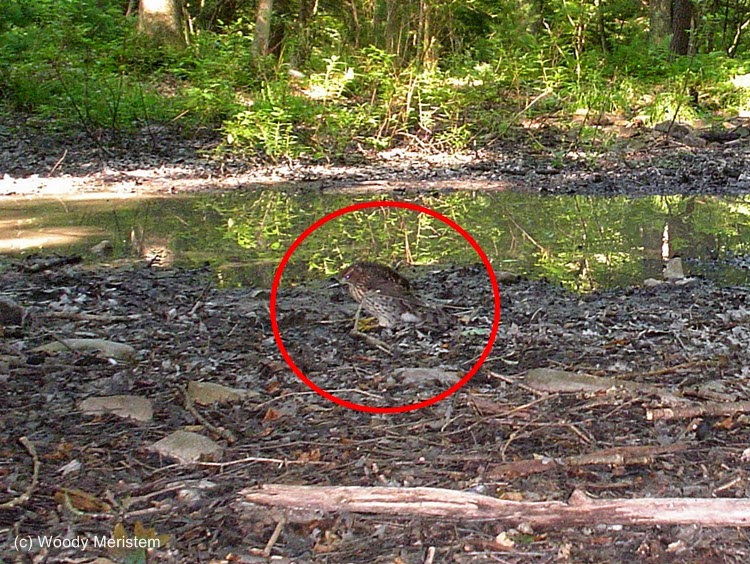 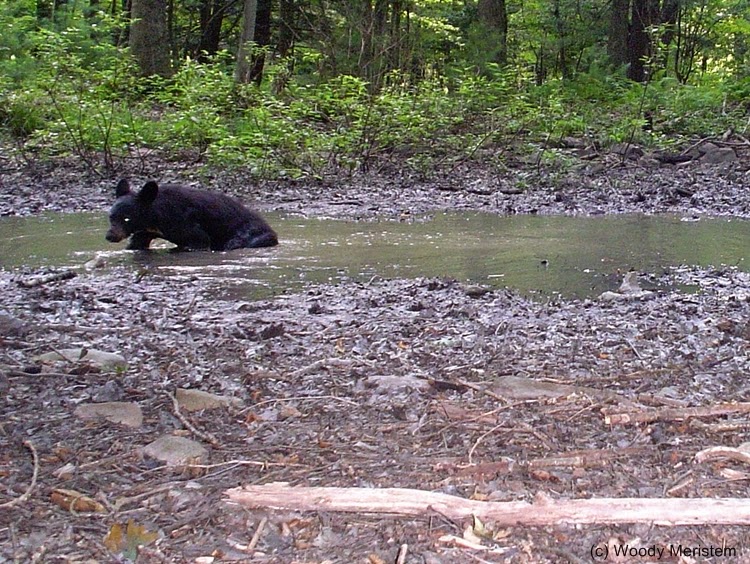 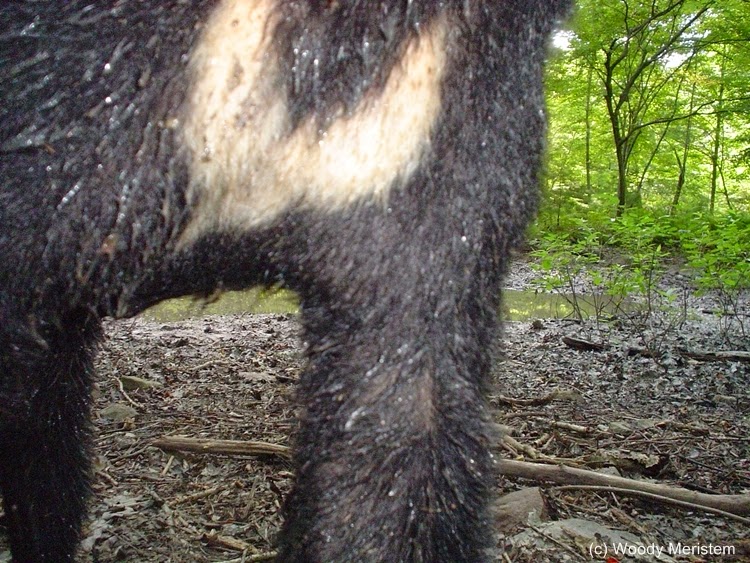 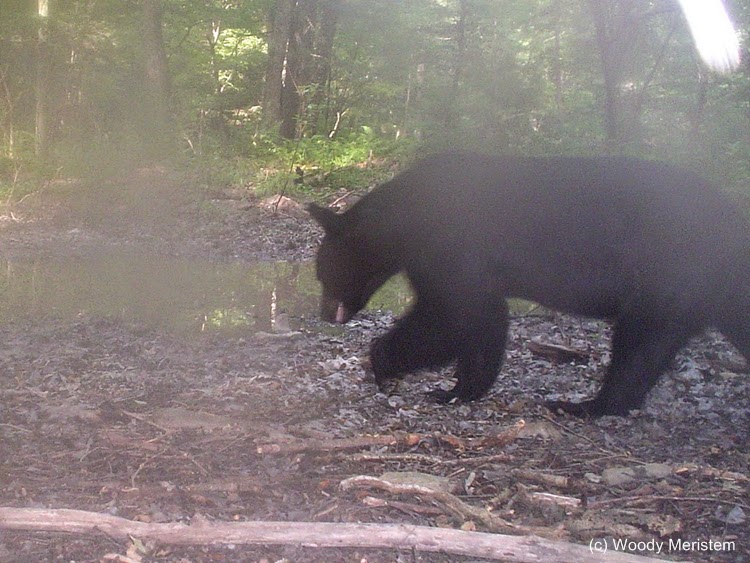 Posted by Woody Meristem at 5:39 AM No comments: 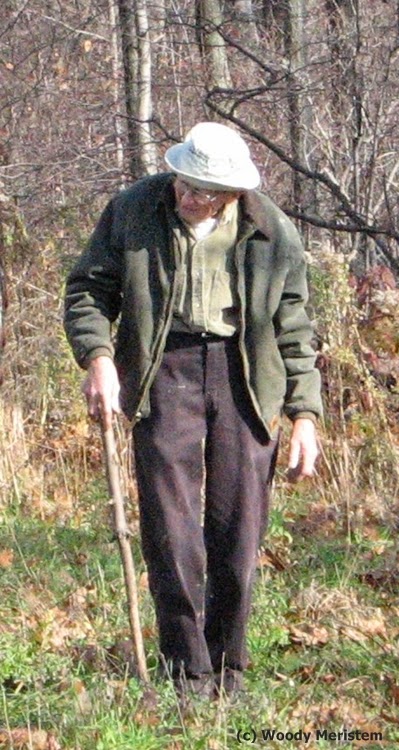 Gerald and I first met when he was in his early 80s. Although he lived on the family farm, Gerald did not farm, perhaps due to a disability with which he was born. Whenever anyone asked what he had done, Gerald would modestly say that he worked in local industry.

In every way a gentleman, Gerald never married but had several loves. Gerald loved his land, loved trees and loved bluebirds. He spoke of his forebearers clearing the fields and providing room and board to the itinerant wall builders who constructed the extensive and beautiful stone walls that encircle the farm’s fields.

Gerald loved his land enough to forever protect it from subdivision and development. The fields are covered by a conservation easement held by the county’s agricultural preservation program. But the bulk of Gerald’s property is woodland that is protected by conservation easements held by a regional land trust. In addition to his home farm, Gerald protected hundreds of wooded acres he owned on a nearby mountain. Those mountain acres had once been farms, but the farmers had abandoned their land in the early 1900s, after which Gerald acquired the properties.

As a young man Gerald planted trees on some of those mountain acres as well as a number of marginal acres on the home farm. Into his 90s Gerald was still planting trees on the farm, a living example of “He who plants trees loves others beside himself.”

A devout Catholic, Gerald nonetheless read the entire Koran – twice – to better understand another of the world’s major religions. 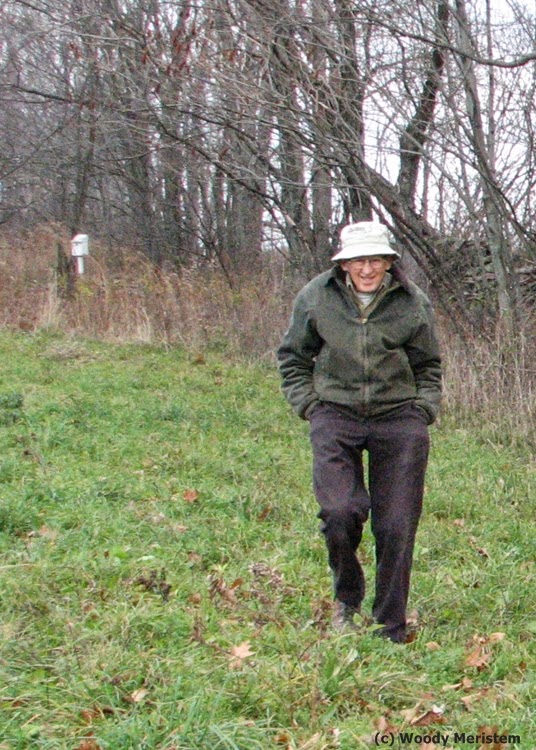 Anyone driving past Gerald’s farm couldn’t help notice the white-painted birdboxes along the edges of the fields. A walk around the property would reveal even more boxes, places for Gerald’s favorites, eastern bluebirds, to raise their young. But, not just bluebirds used Gerald’s handcrafted boxes; tree swallows, chickadees, titmice, nuthatches, flying squirrels and white-footed mice made use of the boxes as well.

Even when he was 90 Gerald heated his house with wood that he cut and split himself and burned in a stove that he had fabricated and welded himself. Since he truly loved trees, Gerald didn’t cut live trees, instead he salvaged trees that were already dead or had blown down. Once when he was in his late 80s I stopped to see him and got no answer to my knock at the door. Since he knew I was coming, when he didn’t answer I became concerned. And then, from beyond the shop behind the house came the sound of a motor starting up. There was Gerald splitting firewood with a hydraulic wood splitter he had constructed years before.

It was in the shop behind the house where Gerald built the birdboxes and crafted home furnishings for his extended family, friends and his own home.

Anyone who knew Gerald liked and admired him – I’m a lucky guy to have met him and to have known this special person. Gerald is gone now, but he lives on in the memories of those of us who knew him and in the hundreds of acres he cared for so deeply.
Posted by Woody Meristem at 1:38 PM No comments:

Pingo scars – what on earth is a pingo scar?

On earth is just what it is, an earthform . Years ago a friend who was a geologist took several of us to see an array of water-filled pingo scars in the Big Woods and explained how they were formed:

During the last 1 ½ million years a succession of glaciers formed in the northern reaches of Canada and gradually spread southward covering parts of Pennsylvania until conditions changed and they began melting and retreated northward. The last of these glaciations is called the Wisconsinan and was present in Pennsylvania from 22,000 years ago until 17,000 years ago.
South of the glacier arctic-like conditions prevailed for even longer; the vegetation resembled that of extreme northern Canada and Alaska and the soil was perpetually frozen in a condition called permafrost.
When the soil froze, perhaps to a depth of as much as 25 feet, it increased pressure on the groundwater below. Due to the increased pressure, warm groundwater was forced upward into the permafrost, freezing as it encountered colder temperatures, and created scattered mounds of ice. As these mounds grew, they would push the overlying soil up, some of which would slide to the sides. When the ice melted, it left a depression, surrounded by a small mound. The process is shown here –


Go far enough north and you could still find active pingos. Here, pingos melted as the glaciers retreated and now, 10-15,000 years later we have the pingo scars. They’re shallow saucer-like depressions typically 50-150 feet in diameter and 3-15 feet deep and usually have a low rim. 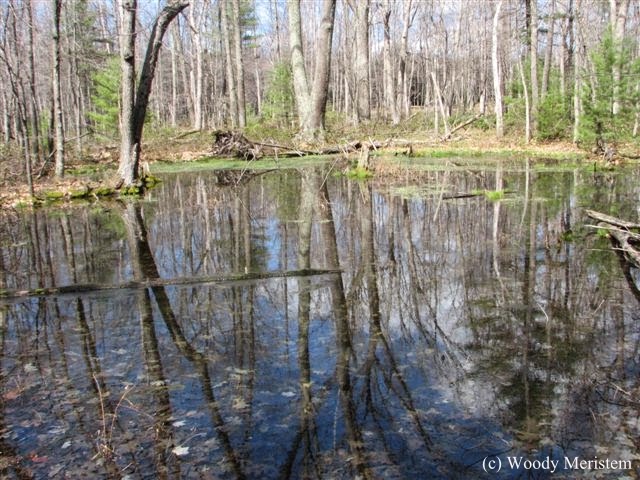 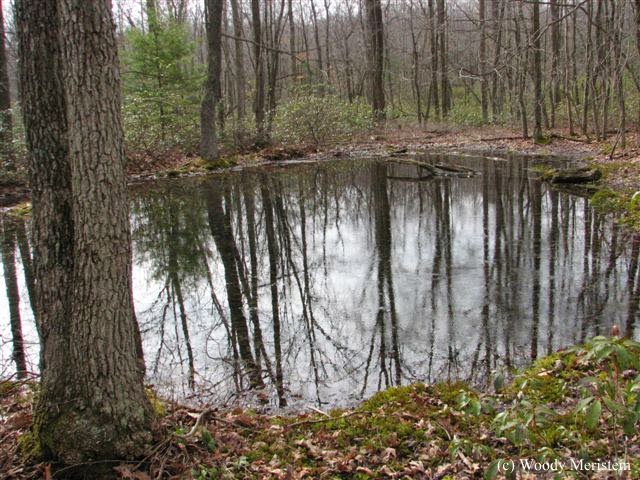 Many, probably most, of the vernal pools in the Big Woods are pingo scars – breeding places for wood frogs and many species of salamanders because they usually dry up in late summer and theref0re can’t support fish populations.

In the Big Woods within 25 miles of here there are several clusters of vernal pools that local folks have usually called “bear wallows”. In normal years these pools fill with water in late fall, then in the spring serve as breeding sites for frogs, toads and salamanders and typically dry up late in the summer. Because they dry up and can’t support fish populations, amphibians can successfully breed there. Virtually all of the pools appear to be what a geologist friend calls pingo scars. What’s a pingo scar? – That’s for the next  post.

Because these pools attract all sorts of wildlife from fairy shrimp to black bears I decided to place a camera trap beside one of the pools that retains water longer than most. In one week the camera captured a good sample of the visiting wildlife.

This pool usually contains some wood frogs and green frogs – the frogs drew an opossum and a raccoon that were both looking for a meal. 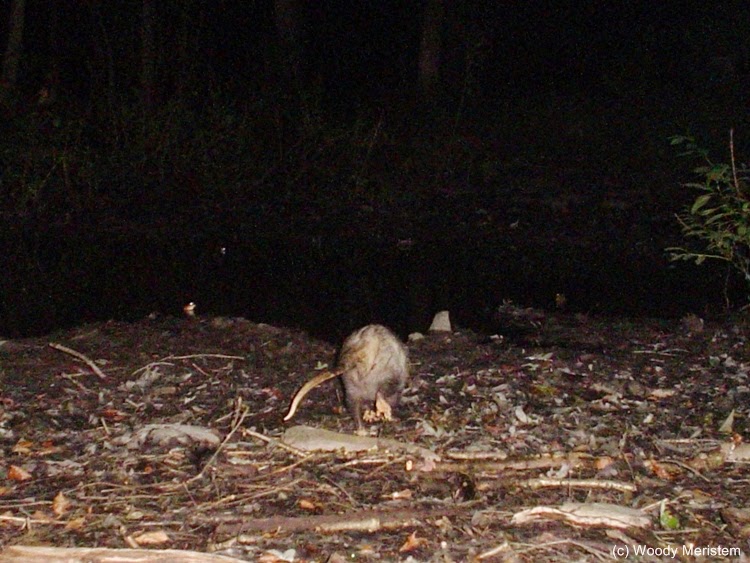 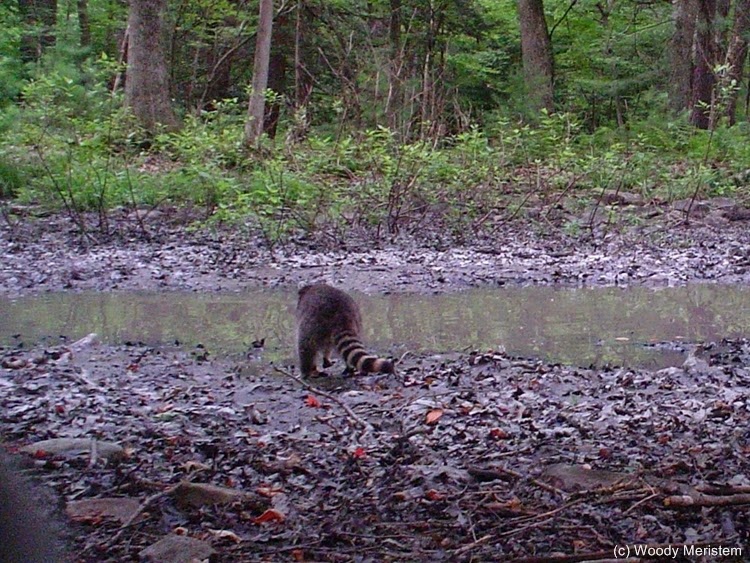 The pools edge is always tracked up by deer, although they seldom seem to actually enter the water. 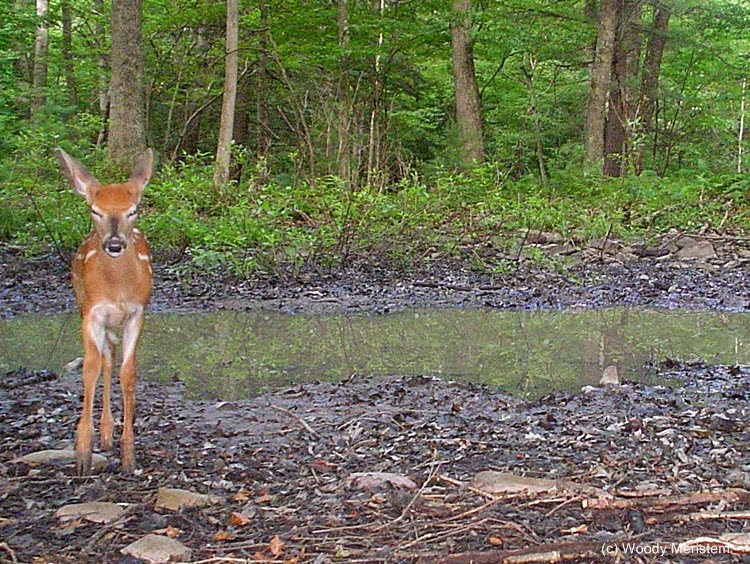 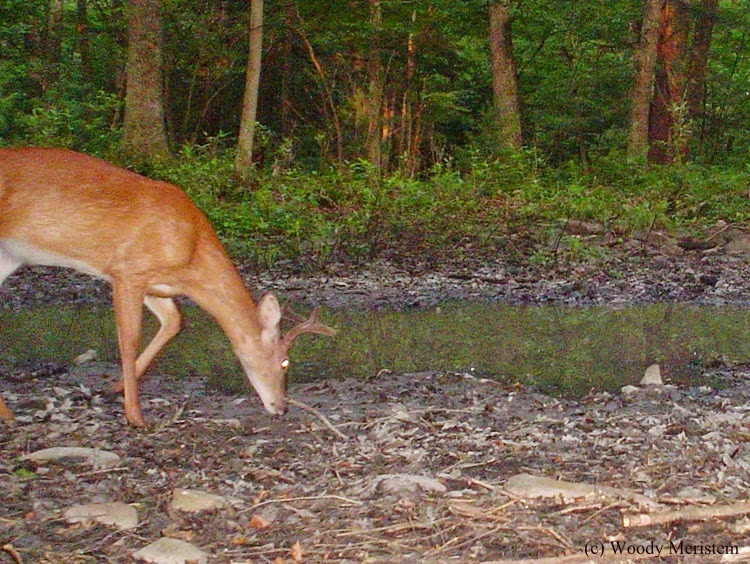 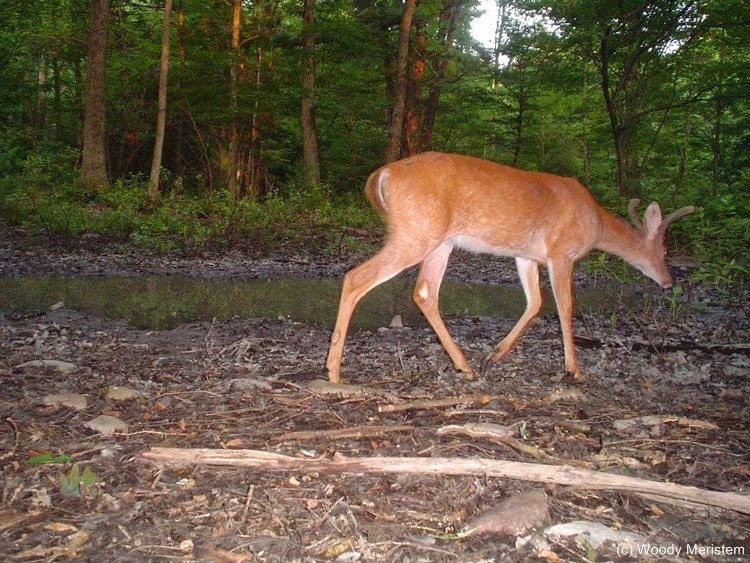 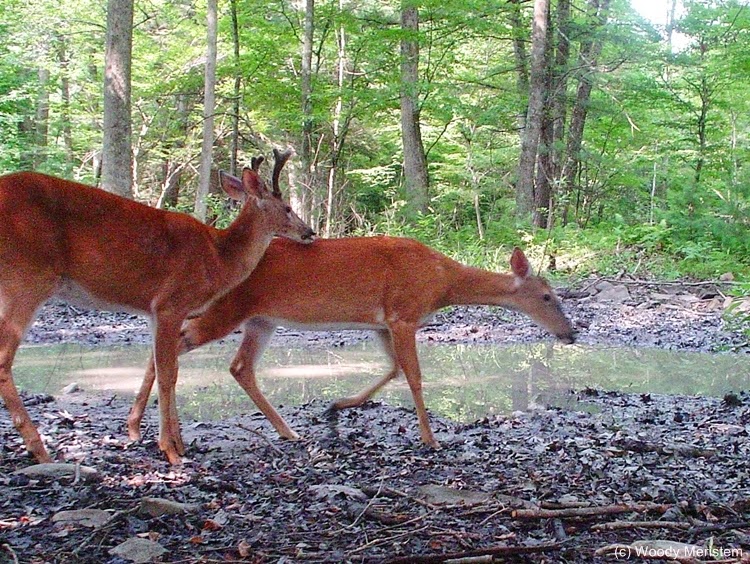 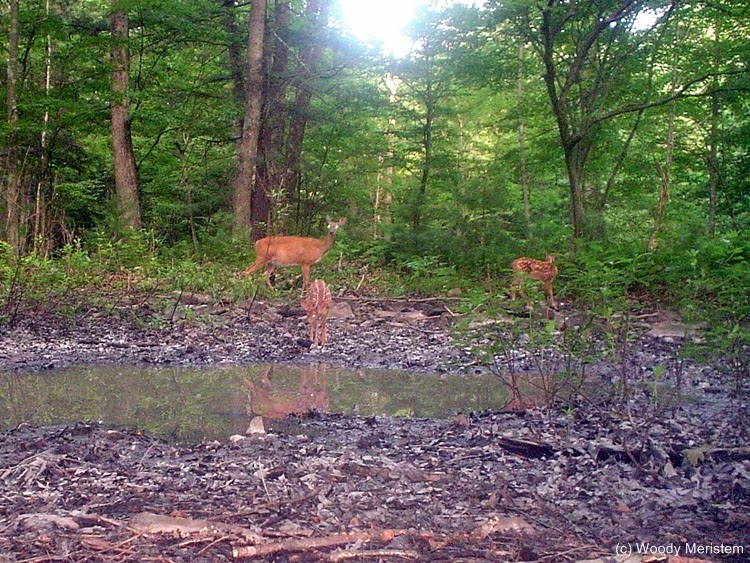 And, the vernal pool lived up to its other name when a bear came to soak in the water – 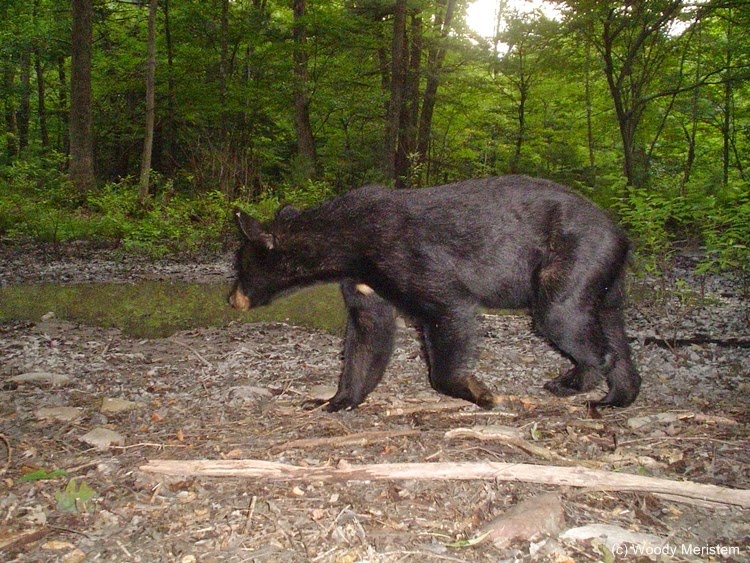 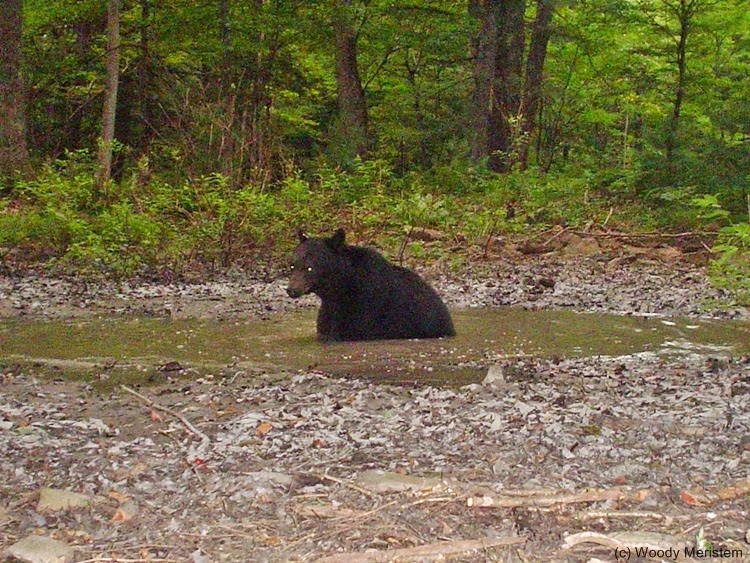 That’s just one week’s yield from the camera trap at the bear wallow.
Posted by Woody Meristem at 9:39 AM No comments: