The old farm is bisected by a township road where there are several parking areas, one of which provides easy access to a short hiking trail. The only problems with visiting the Woodring Farm during the elks’ early fall rutting season are the traffic on the road and the hordes of rubbernecking tourists.

Nevertheless, the old farm is still a good place to see elk. Just before sunset on one pleasant evening I pulled into the parking area intending to walk the trail to a high field out of sight of the road. Across the road in full view of the tourists was a bull with a small band of cows. The bull suddenly trotted up to the edge of the woods and began thrashing small trees, rubbing his antlers and suborbital glands on the trees.

Apparently he had detected another bull that was out of sight; here’s a short video –
Leaving the tourists behind, I headed up the hill on the trail. There in the higher field was another bull and his band of cows – 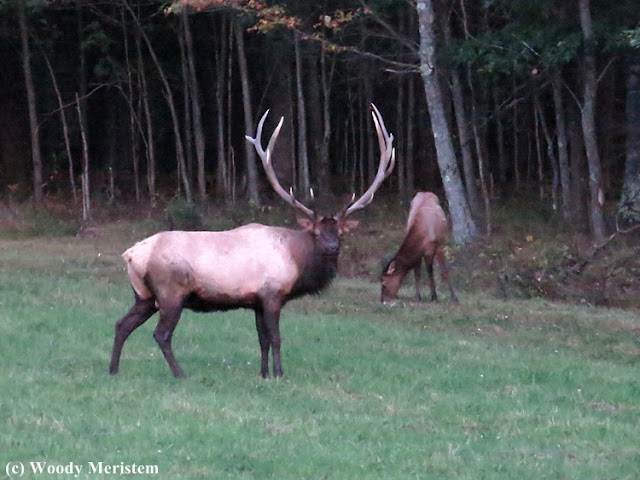 Unfortunately, by then the sun was down behind the hills and the camera was pushing its ability to capture an image.
Posted by Woody Meristem at 10:27 AM 8 comments:

The Spider and the Bee

It was a beautiful late summer/early fall day with bright sun, and white clouds sailing on a steady breeze. Along the edge of the pond several species of goldenrod were in bloom; those flowers attracted a large number of insects including several species of bumblebees. 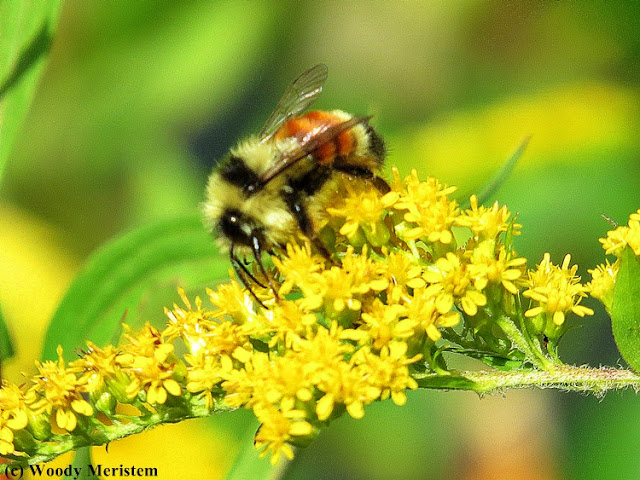 These bees inhabit nests in cavities in the ground where they establish small colonies. The queen leaves hibernation in early spring, finds a suitable hole in the ground to begin laying eggs and feeds on flowers. The eggs develop into workers that continue foraging for the colony and tending more young. In the fall the colony begins to produce drones (males) and new queens which mate before cold weather sets in. The newly fertilized queens hibernate in the soil during cold weather while the old queen, the drones and workers die. 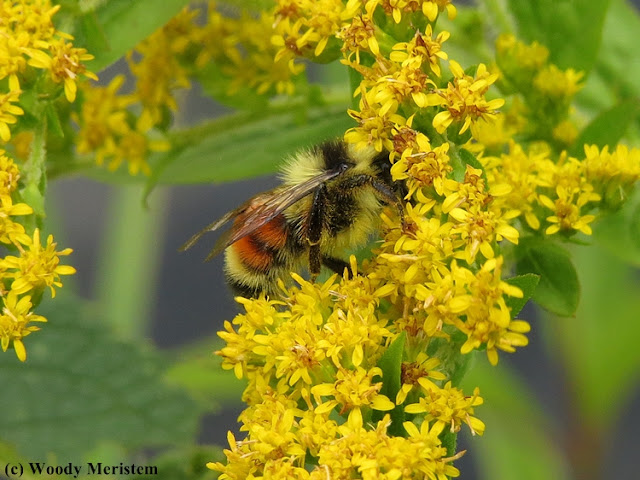 But about ten feet from where I took photographs of the bees another tri-colored bumblebee was locked in a life or death struggle with a marbled orb weaver spider. Here’s a short video of a much longer struggle, including its outcome –


The spider didn’t feed on either bumblebee while I watched, instead leaving them stored in its web.

Posted by Woody Meristem at 9:45 AM 7 comments:


Back in mid-February I found a long-fallen oak tree spanning a lengthy pool in a large stream. “Ah-ha” says I to myself, “that would be a good spot to put a camera trap.” Because the three inches of snow on the ground would make it easy for someone to follow my tracks, I decided to use my old commercial trail camera because it was expendable. 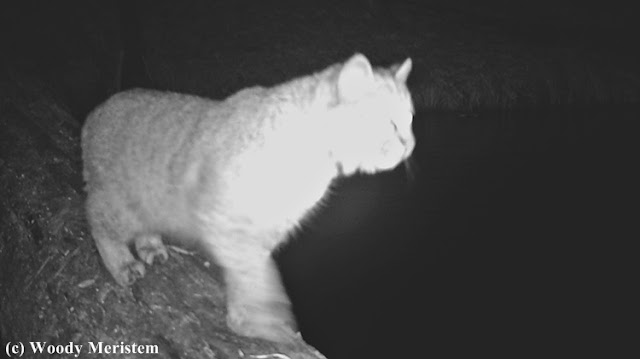 It also had photos of a raccoon and porcupines. Because the winter was warm, by then the snow had melted and there wouldn’t be any tracks to follow so I decided to replace the commercial camera with a homebrewed camera trap that takes much better pictures anticipating some good bobcat photos.

All through March, April and May the only things that showed up in the photographs were porcupines and, on a couple of occasions, raccoons – 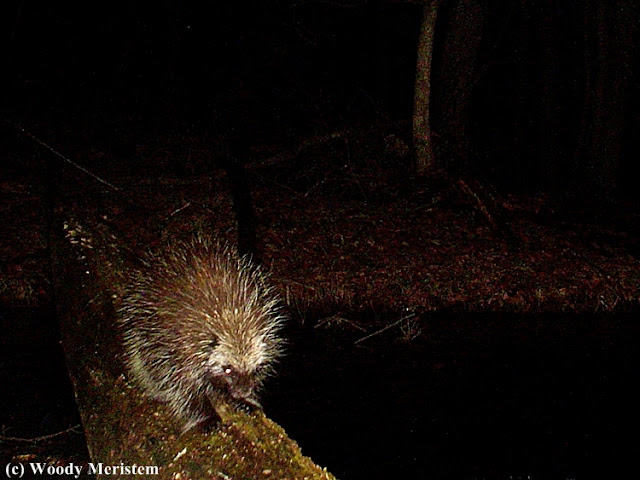 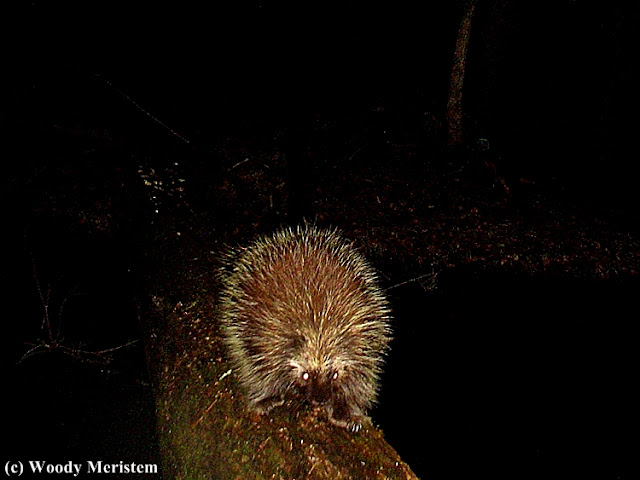 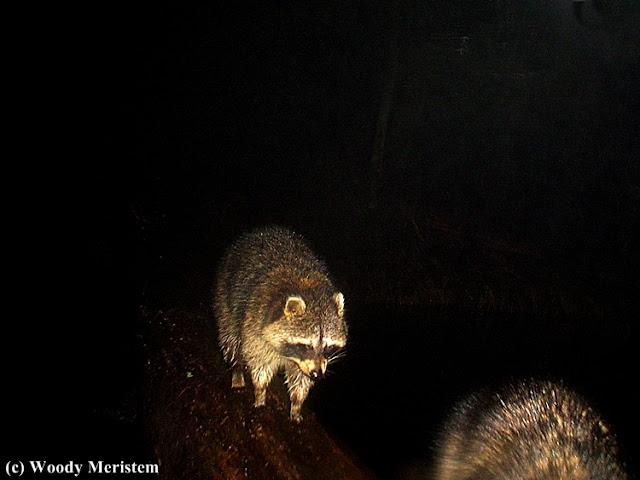 Activity picked up in June as first a crow was photographed – 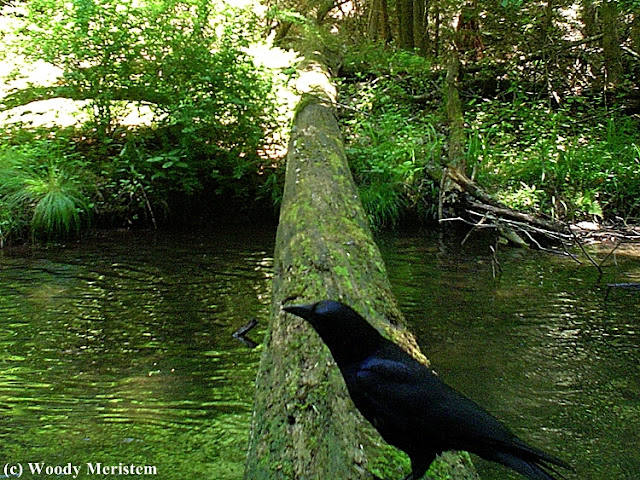 Followed by a great blue heron – 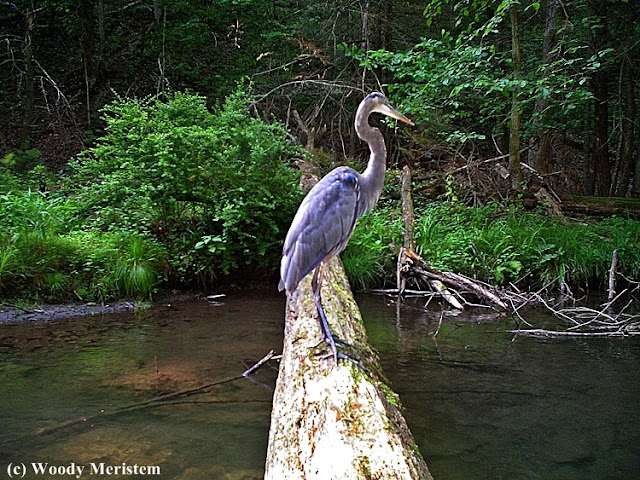 The parade of porcupines continued – 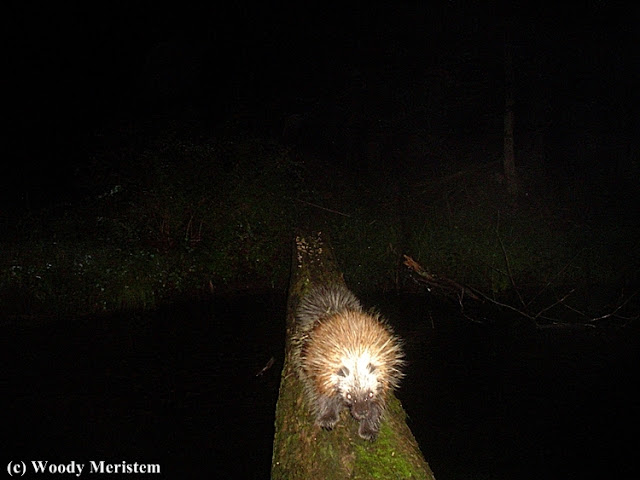 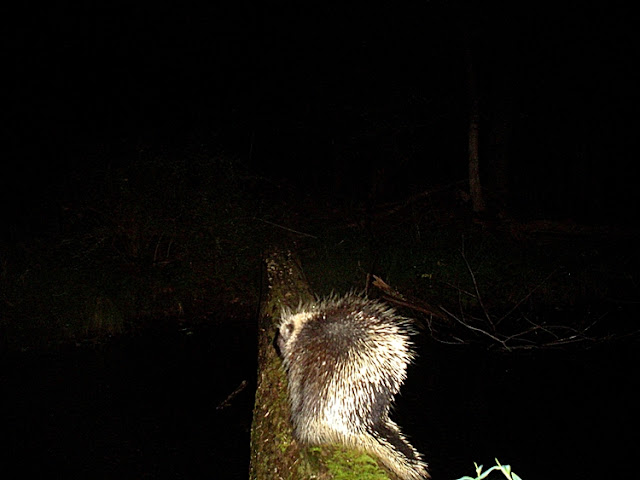 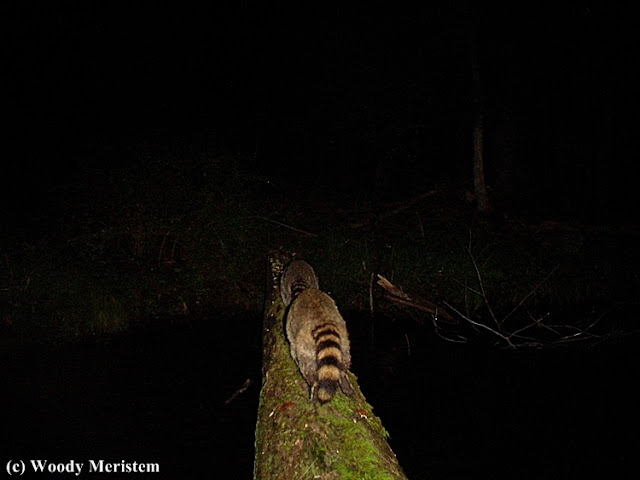 As did a great blue heron, probably the same bird as earlier – 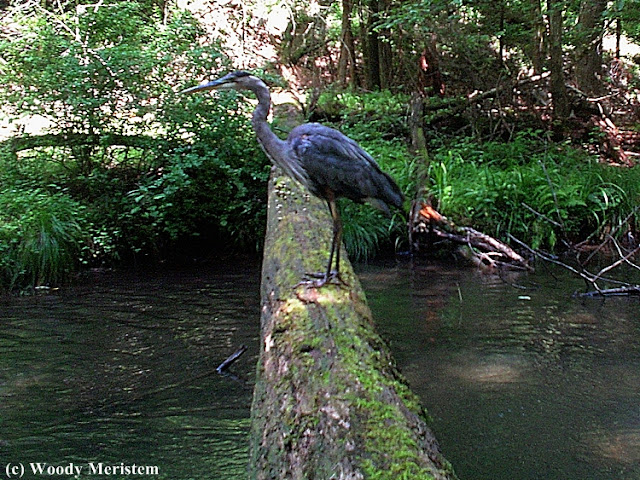 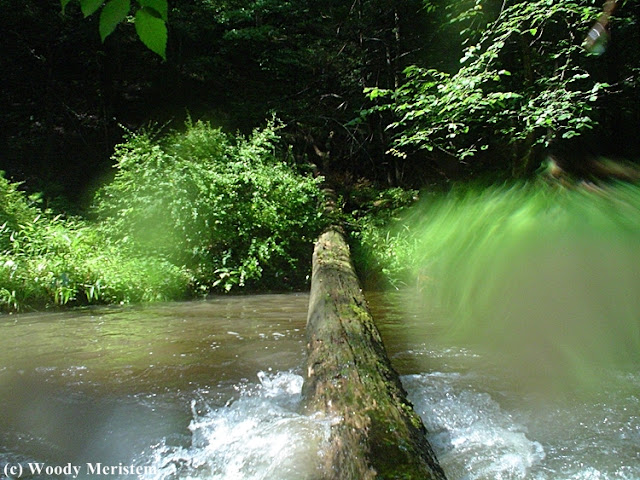 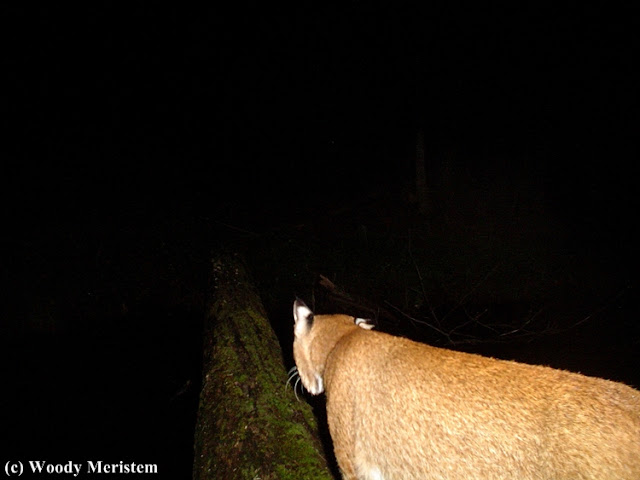 It was with hopes for photos of a bear crossing the log, or a fisher, or several photos of a bobcat making the crossing that I’d put the camera trap at the log. But, with due respects to the porcupines and raccoons, this spot has been disappointing. Perhaps other fallen trees spanning the stream proved to be better bridges or the bear, bobcat and fisher just didn’t have any reason to cross. And having another promising spot, I removed the camera trap.
Posted by Woody Meristem at 5:12 AM 1 comment:

Here we are, summer’s almost over and in northcentral Pennsylvania, the cool-season grasses that constitute our lawns have begun putting on their autumnal spurt of growth. Not as vigorous as its growth in the spring, the grasses’ fall growth will nonetheless probably require weekly mowing. 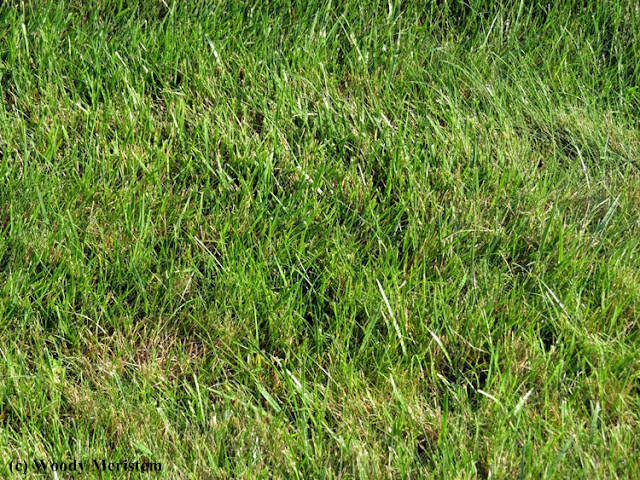 Personally, mowing the lawn isn’t one of my favorite activities – call me crazy if you will, but I’d actually rather shovel snow. To this end our lawn is small, kept that way through the use of groundcovers and native vegetation.

But it’s obvious that not everyone feels that way, some people have LARGE areas of lawn – 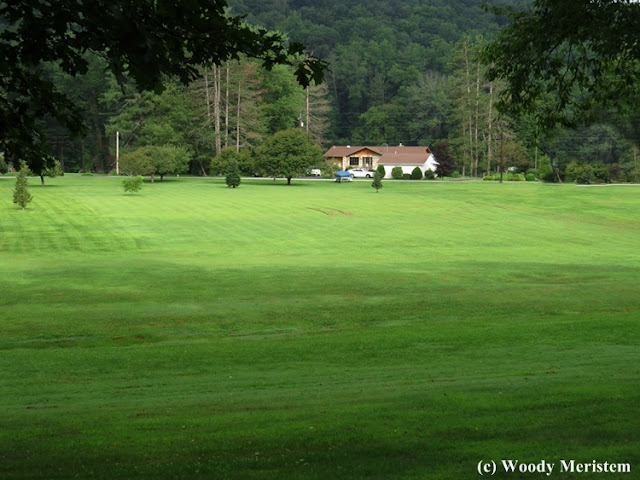 Those lawns are fertilized, sprayed and mowed on a regular basis; kept from becoming wildlife habitat or a locale for wildflowers. Large lawns, like our small lawn, require frequent mowing – sometimes that’s done by a hired lawn service, but frequently it’s done by the homeowners on their “toy” tractors painted orange, green, yellow or red. I’ve often thought of those folks playing "farmer" on their large suburban or exurban lots out in the “country”. 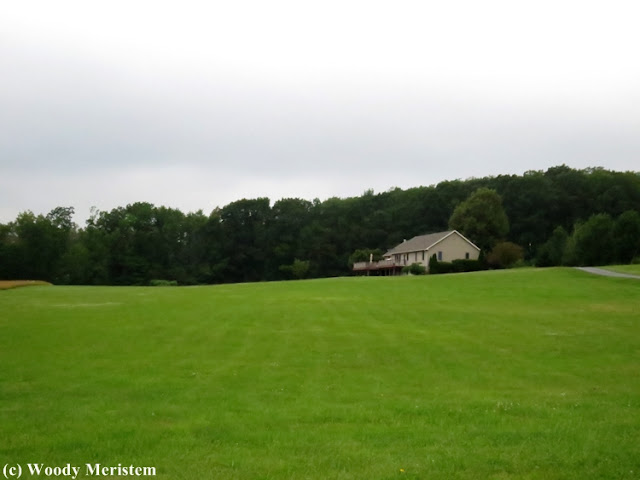 A good friend uses the term “recreational mowing” for what those folks are doing. I don’t know whether he originated the term or not, but it sure seems appropriate. It would be interesting to see if sociological or psychological research has been done to determine why those folks enjoy spending hours, and thereby a good portion of the time they’ll have on this earth, on their weekly mowing. 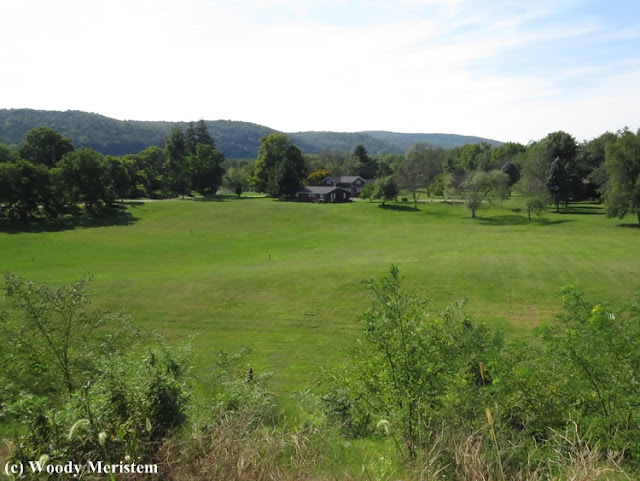 These folks need to get a life and find something useful to do with their time.
Posted by Woody Meristem at 5:07 AM 5 comments: