Late summer has been hot and dry in northcentral Pennsylvania, not good conditions in which to head for the elk range. The arrival of a brief spell of cooler weather was enough to persuade us to make the journey. Accompanied by our daughter, I decided to take a circuitous route to visit several spots in the remote southern portion of the elk range.

The area is a high portion of the Allegheny Plateau between the West Branch of the Susquehanna River and Sinnemahoning Creek including some of the most remote portions of the state. Our drive passed through the 50,000 acre Quehanna Wild Area, once the site of a test facility for a proposed nuclear powered aircraft in the 1950s.

Quehanna was also the location of a handful of widely scattered farms in the late 1800s. It must have been a hard life on those farms, with no nearby neighbors, a short growing season and poor soils. Eventually some of the old farms were converted to food plots to enhance wildlife habitat. The history of Quehanna is outlined in Quehanna: The Blemished Jewel Restored by my old friend Ralph Harrison. 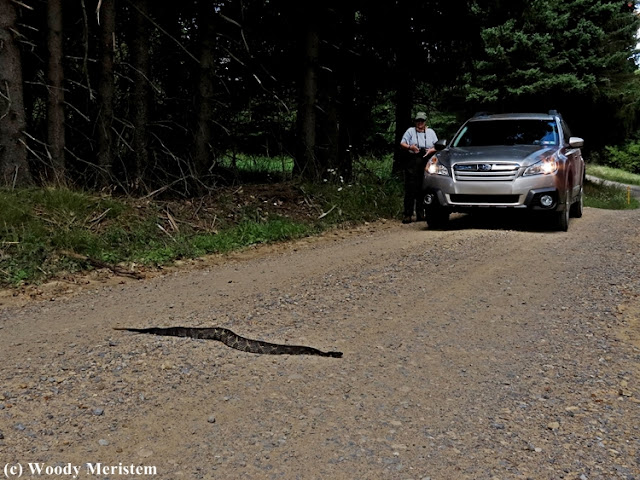 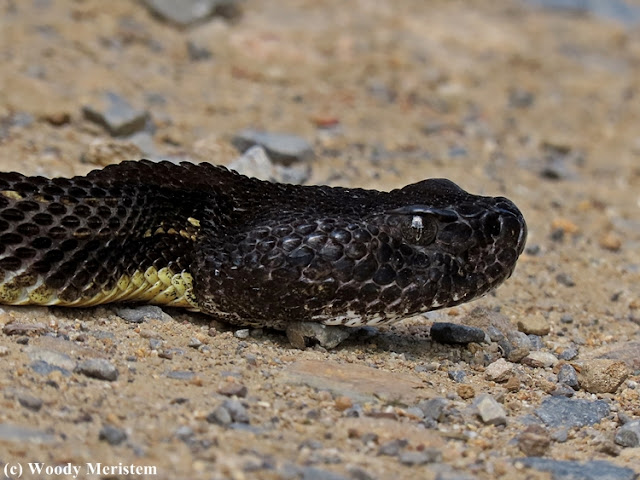 After urging the snake off the road, we stopped at one of those old farms to look over the fields where flat-topped white aster was in bloom – 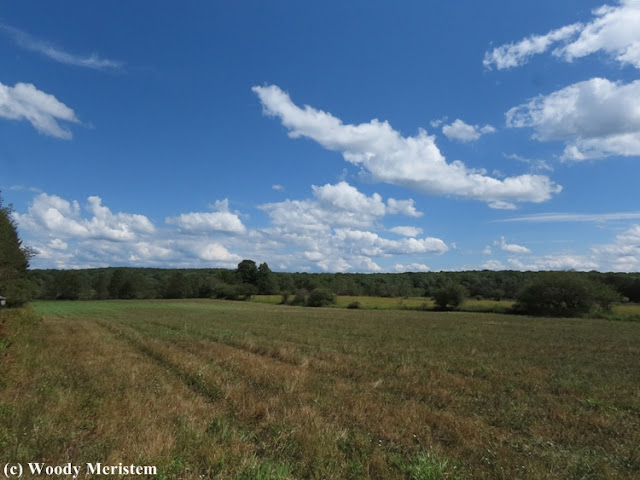 The water level in the man-made wetland was rather low – 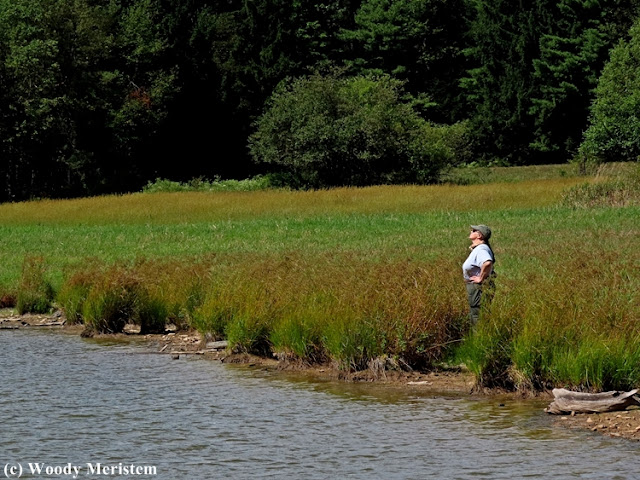 and some arrowhead was in bloom – 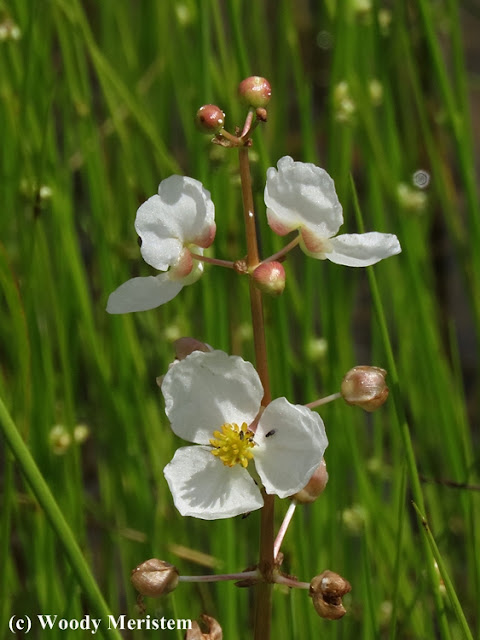 Then in was on to the heart of the elk range on Winslow Hill. We went to my favorite spots for viewing elk, BUT … with the hot dry weather the herbaceous plants on which elk feed in the summer were brown and dry. 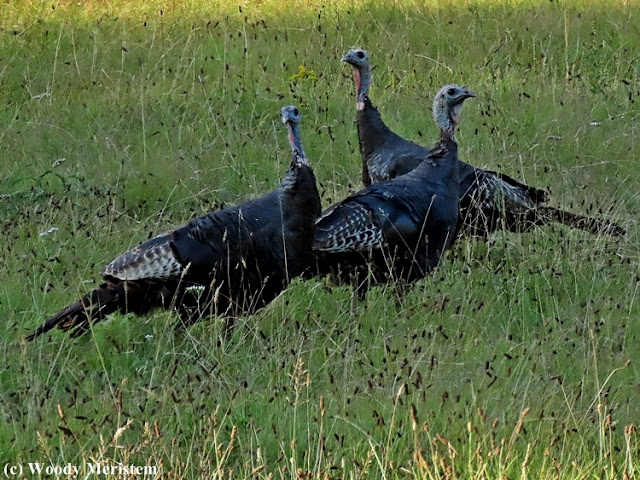 The only elk we saw were in moist meadows along larger streams or in areas that had been mowed recently. But, we did see elk – a band of four bulls – some with shards of velvet still hanging from their antlers – 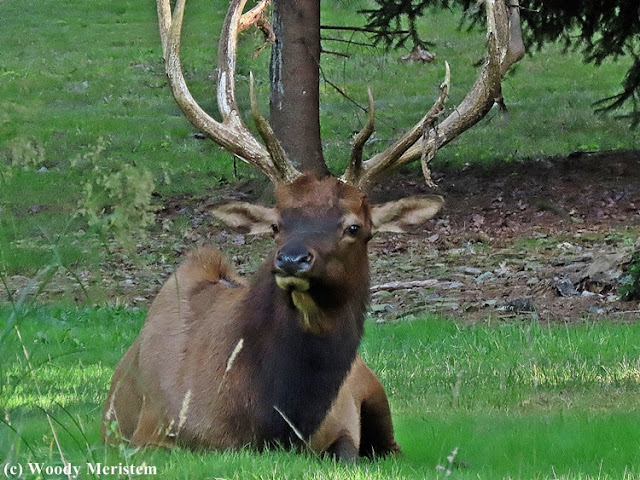 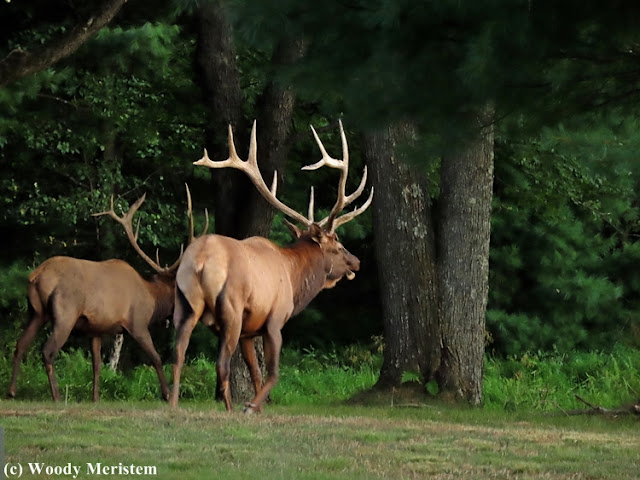 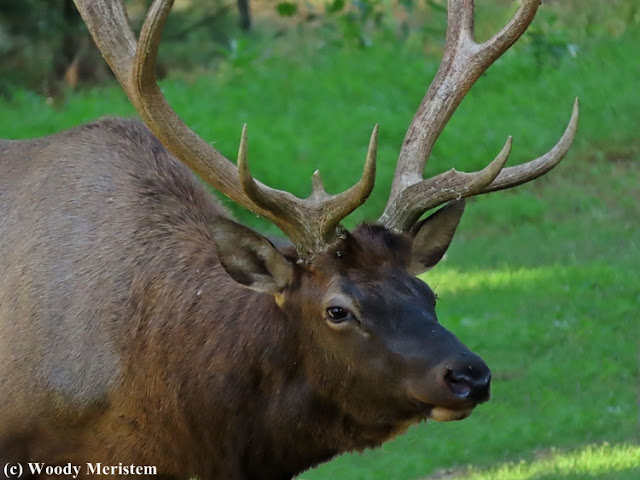 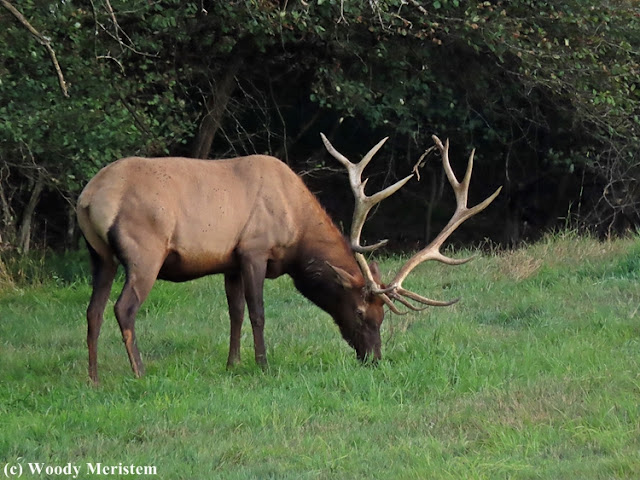 By then it was getting late, the light was fading and it was time to leave – 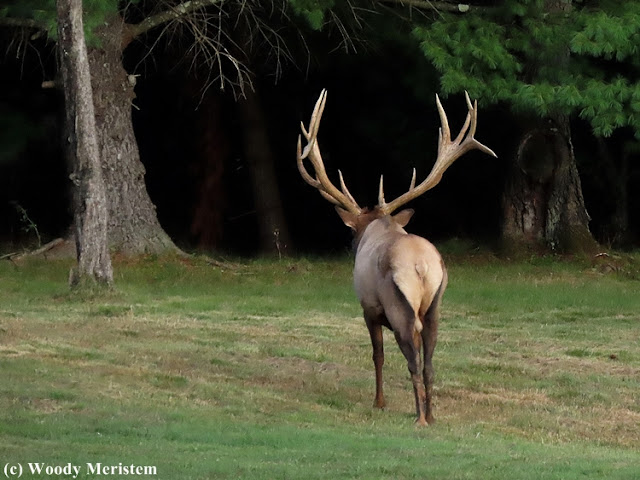 It was a great day in elk country - beside what you've seen in these photos we saw a yellow-phase timber rattlesnake, four other bull elk, some elk cows and calves and a lot of white-tailed deer.

Note: Timber rattlesnakes are calm and non-aggressive and aren't out to get you. In over 50 years of working and recreating in rattlesnake habitat I've seen countless rattlesnakes and have stepped over two (that I know of), that I hadn't seen, without incident. This one was a mature snake close to four feet long, we may well have been the first humans it had ever encountered.

Temperature 87°F and rising, humidity 127% (not possible, I know, but it sure felt like it), no breeze, very hazy sun and some clouds. An ugly day for a walk on seldom-used roads through brushy areas and old fields. But it was also a good day for finding insect activity – in spite of the sweat that ran down my back and dripped on my glasses. And so I made a three mile loop and was back to the car before the heat became truly unbearable for this winter-loving naturalist.


The area is fairly flat with wet ditches and a couple of wetlands. It had been hot and rainless for several weeks, so mosquitoes were few and far between and the normally wet areas were dryer than usual. But it wasn’t dry enough to really impact any of the vegetation, and so there were flowers in bloom: 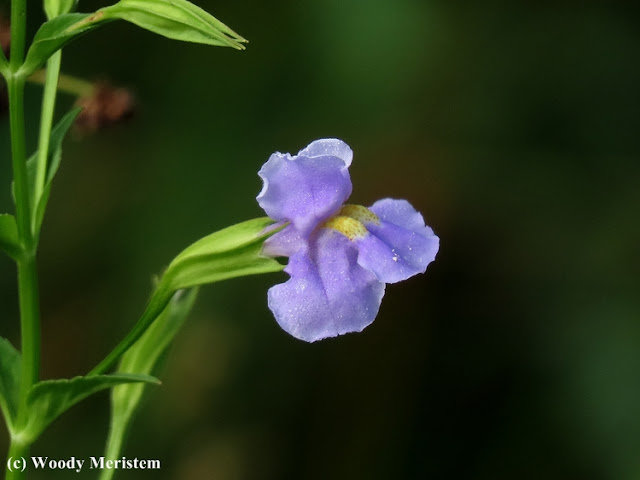 And the lavender flowers of wild bergamot bloomed in both widely scattered individual plants and large colonies. Wild bergamot appears to be the favored food plant of an interesting day-flying moth, the hummingbird clearwing – 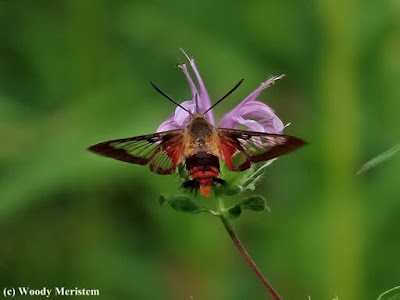 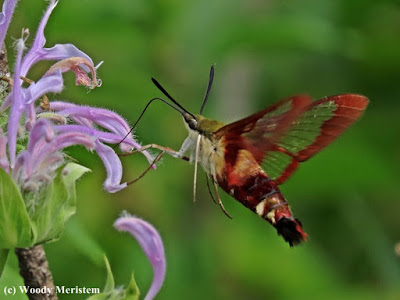 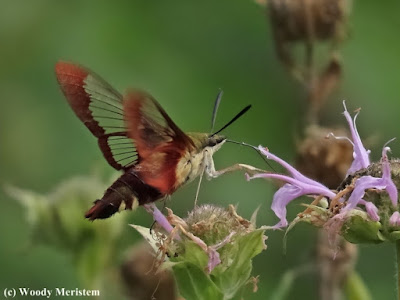 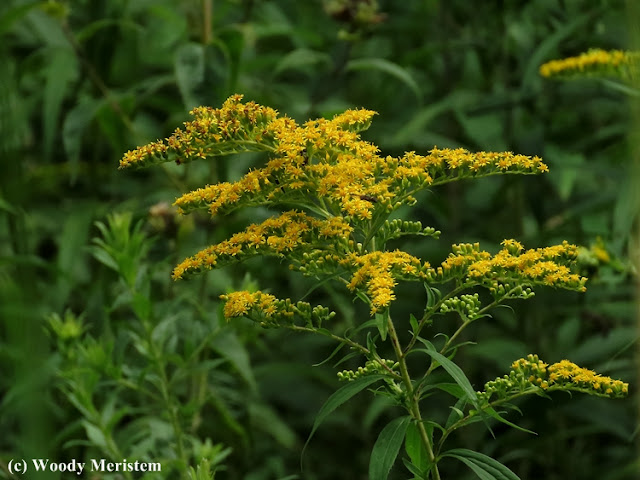 From the open areas of old fields and heavily logged woodland, the old road wound through wet woodland and a wooded swamp. For almost a half mile the road was covered with tall vegetation where at least one pickerel frog jumped away from my boots every four to six feet. There must have been hundreds of frogs, but only one landed in an open area that offered a chance for a photo – 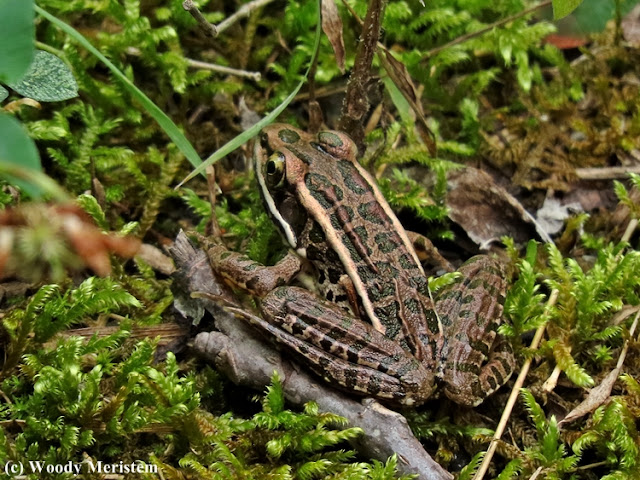 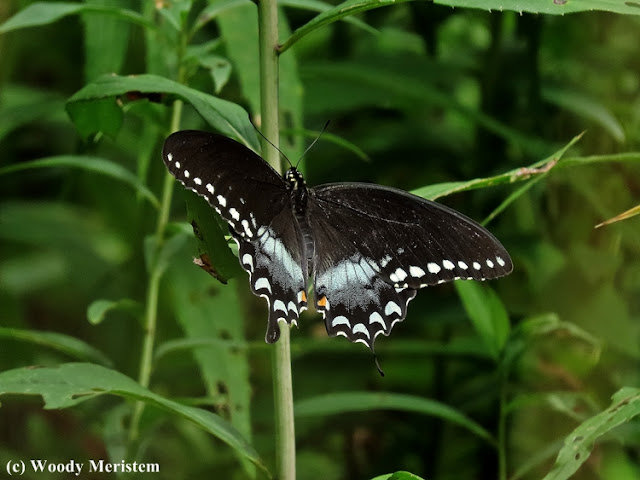 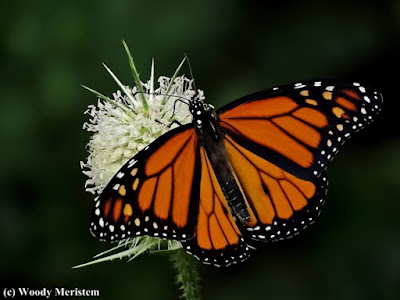 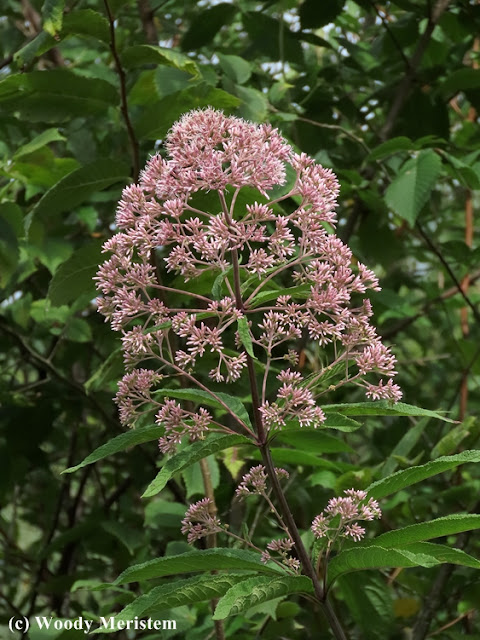 And some spotted jewelweed – 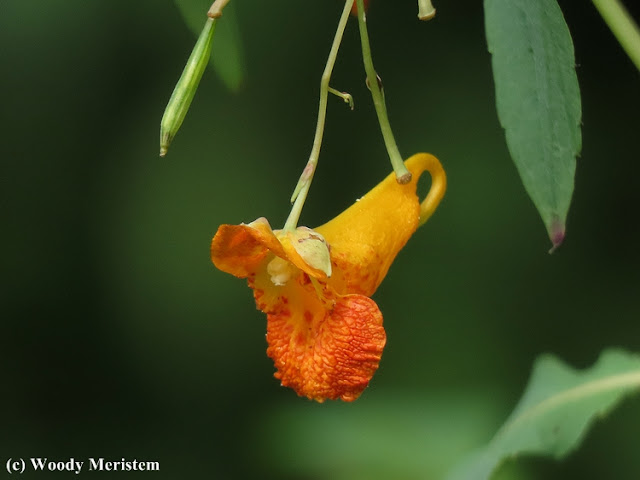 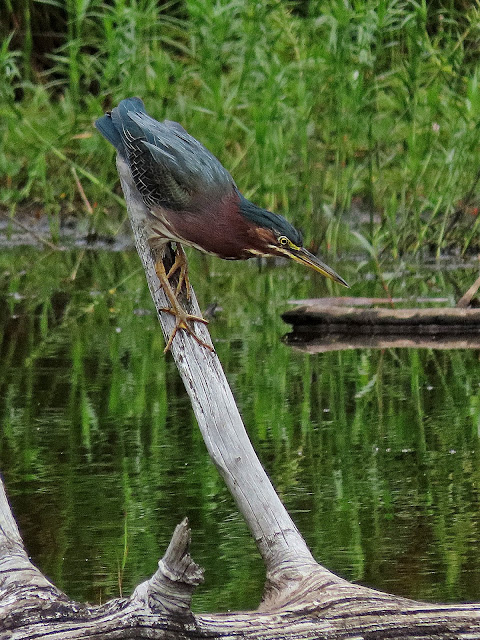 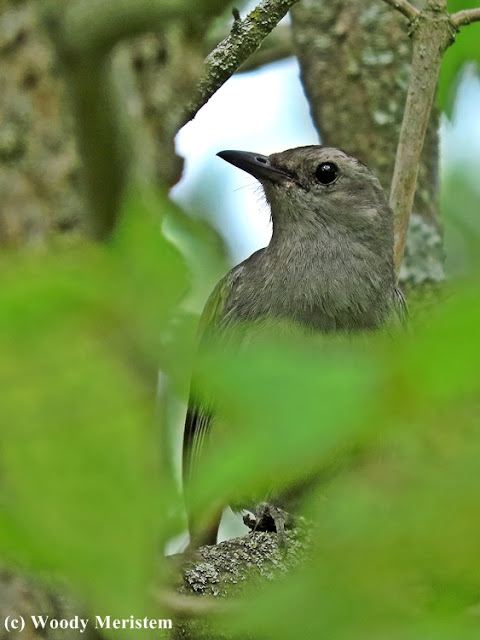 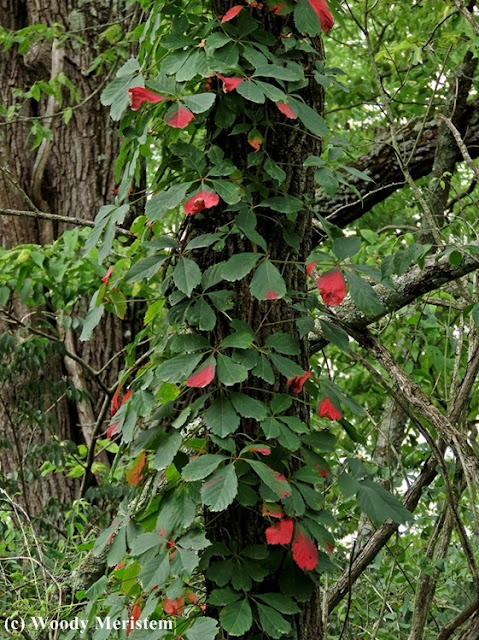 It was good to get back to the air-conditioned car for the ride home.