In the words of Paul Simon’s song “Kodachrome” –


Summer greens, compared to those of spring, tend to be pretty uniform and the hillsides often look just plain green. But there certainly are “nice bright colors” in addition to the “greens of summers”.


Here they are, some of “those nice bright colors” of summer –

A camera trap has been aimed down a fallen white pine for well over a year. At first it was only there sporadically and was a homebrewed camera trap that took color still photos day and night – photos from that unit can be seen here .


More recently the camera trap has been one that took videos; at times a commercial unit has been there and sometimes it’s been a homebrewed video camera trap – some of those videos were posted here.


Over time the camera trap has been moved around a bit to give it a better/different view or make it more secure. Over the last few weeks the camera trap captured some interesting or humorous videos of common mammals –

Hope you enjoyed these, the camera may well capture more good videos before it comes in for a while in anticipation of deer season when more humans will be in the Big Woods.
Posted by Woody Meristem at 12:19 PM 7 comments:

Morning at the Lake

It was hazy, hot and humid early in the morning and the day promised an escalation of all three – UGH! There’s a trail around a nearby lake that, although it has some gentle ups and downs, doesn’t have the climbs found on most of my favorite trails – climbs are to be avoided when it’s hazy, hot and humid. Large portions of the trail are virtually level, being at water level, and provide views across the lake and glimpses of the aquatic ecosystem. So to the lake I went. 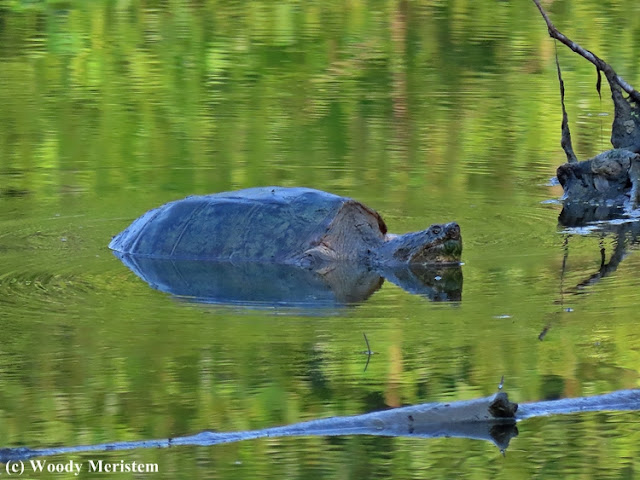 Next was a great blue heron also hunting a meal – 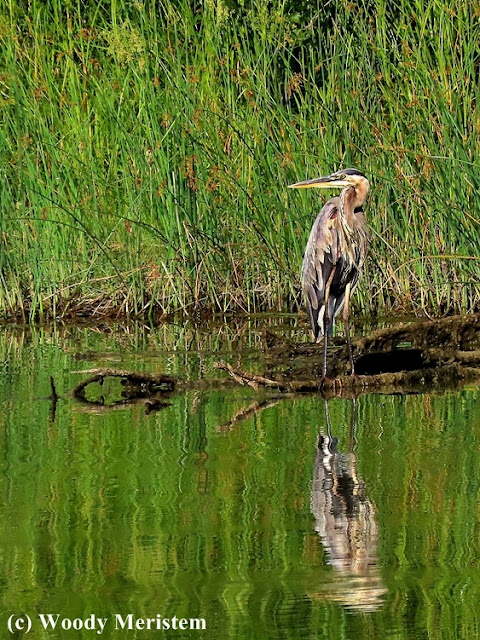 And a great egret in deeper water doing the same – 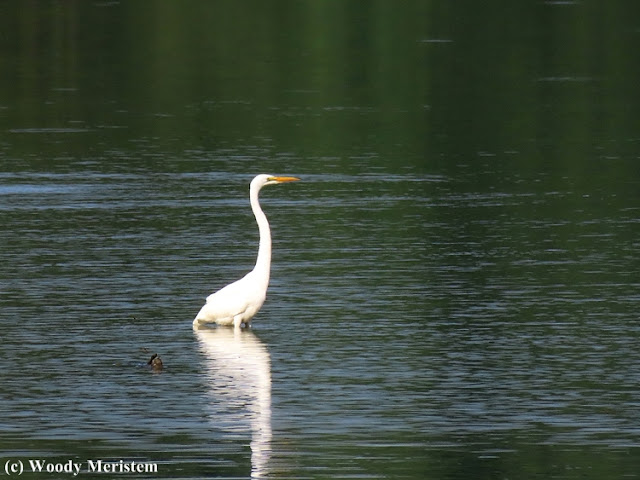 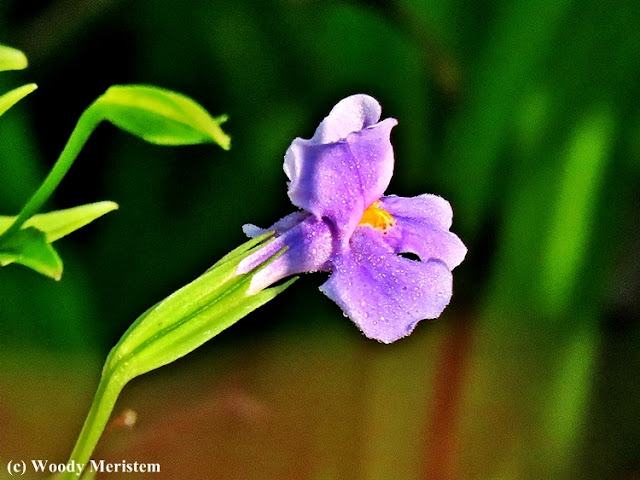 Also along the shore was an active beaver lodge – 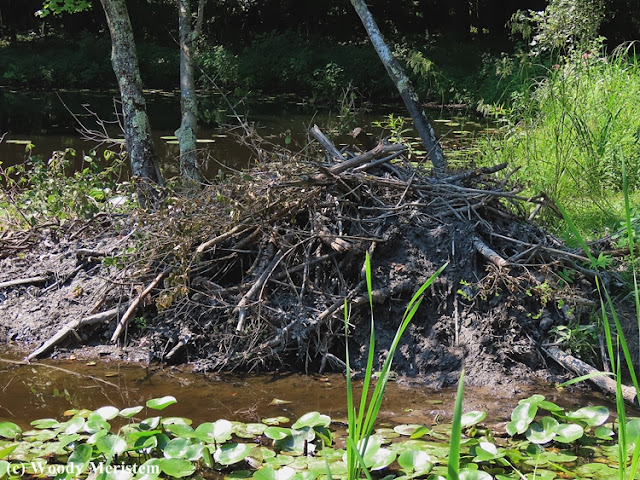 And in the tree above that a green heron – 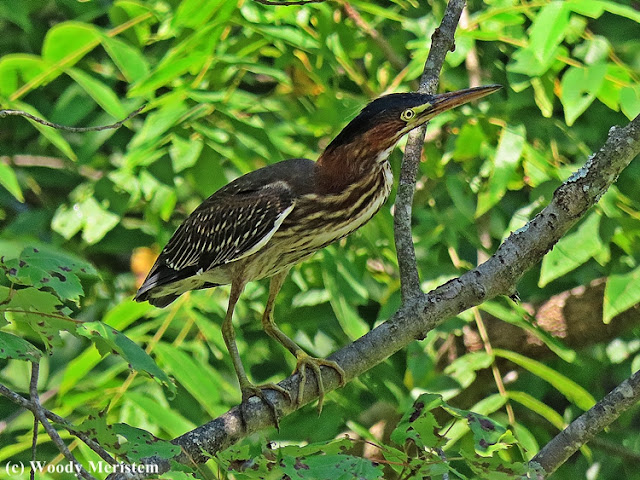 The lily leaves were resting spots for several species of dragonfly –


While more dragonflies used other perches –

The real trophy of the morning was a six-spotted fishing spider, a spider that dives beneath the surface to feed on aquatic insects, small tadpoles and tiny fish – 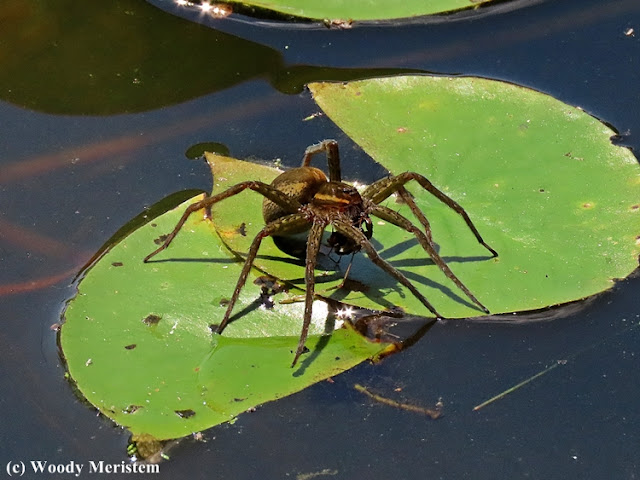 That morning at the lake was the inaugural outing for my new camera.


For years my favorite superzoom camera has been a Canon SX 50 with its 50 power zoom lens (the equivalent of a 24-1200mm zoom lens). Now having taken far in excess of 100,000 photographs the camera’s lens grinds as it extends and retracts and occasionally has a bit of trouble focusing. So, it was time for a new superzoom; unfortunately the SX 50 is no longer made and it’s virtually impossible to find a new one.


Because of the excellent service the company and its cameras have provided over the years, I’m a Canon fan so a Canon SX 70 was my choice for a new superzoom. The SX 70 has a 65 power zoom lens (21 to 1325mm); it also has a brilliant viewfinder and LCD screen; it both zooms and focuses more rapidly and its controls are easier to use than the SX 50’s; the SX 70 takes the same filter adapter and lens hood as its predecessor; the SX70's minimum shutter speed is as long as 15 seconds which easily permits photographs like this – 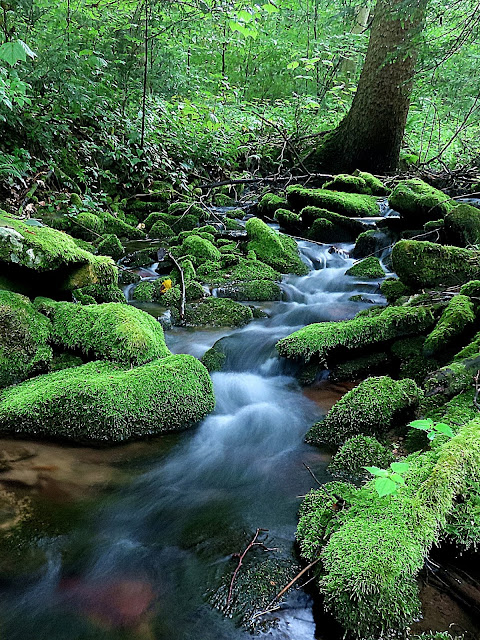 That said, I have a couple of minor complaints: the SX50 had a small LED that was lighted to let the user know whenever the camera was on, the 70 does not; the SX 70’s battery is a different size than the 50’s so all my old batteries are now useless.


One major gripe – to me the SX 70’s photos don’t appear as sharp as those from the SX 50 when taken at the same focal length and settings. Would I purchase this camera again? Probably, but I'd certainly take a longer look at the superzooms from Nikon, Panasonic and Sony.

All the photos in this post are from the new SX 70.