Part of a dead tree had fallen with one end several feet off the ground while the other end lay in a slight depression. Early in the fall I placed a camera trap, that takes videos both day and night, aimed down the fallen log toward the elevated end to see what animals used the log.


Hopefully the animals traveling the log would turn around when they got to the elevated end and come back toward the camera – perhaps a bobcat, or a fisher, or ...


As fall ends it was time to check the camera. Here are some of the results, videos of a female pileated woodpecker, ruffed grouse, white-tailed deer and red squirrel along with some of the many videos of white-footed mice that regularly traveled along the log.


Notice the shredded ear on the first white-tail buck – probably damaged in a fight with another buck.

No bobcat, no fisher. Not yet, but maybe next time.

Fall ends with a heavy snowfall, a fitting beginning to winter.
Posted by Woody Meristem at 5:10 AM 4 comments:

A Naturalist Walks an Old Farm

Early this past last summer I had the privilege to spend some time exploring an old hill farm. A farm it once was, but now the property is a rural get-away for folks from the city.

The area that was woodland in 1938 was a sugarbush, where sugar maples were tapped to make maple syrup; a few of the large old sugar maples remain – 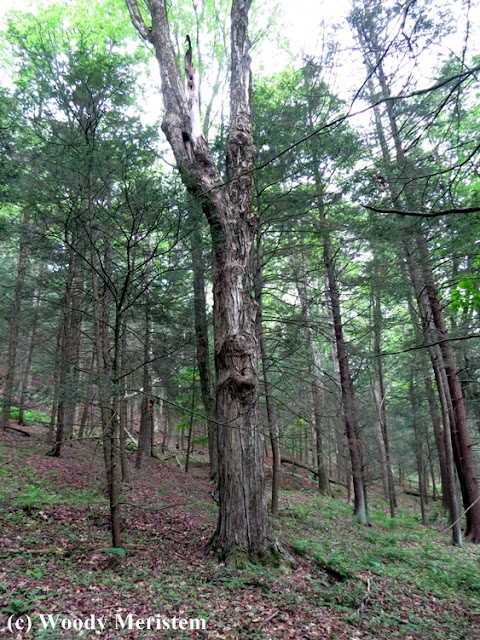 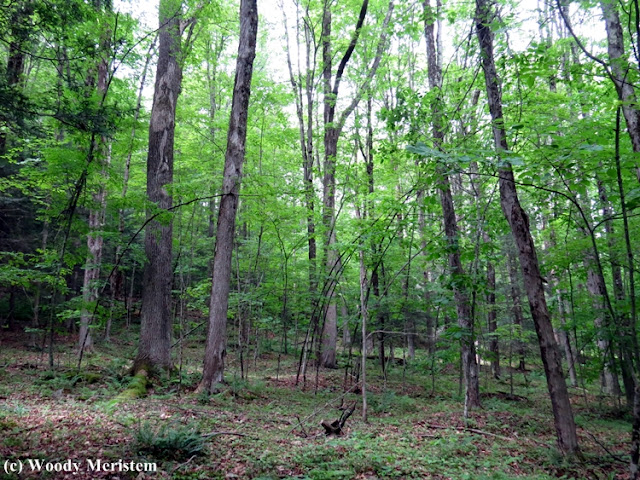 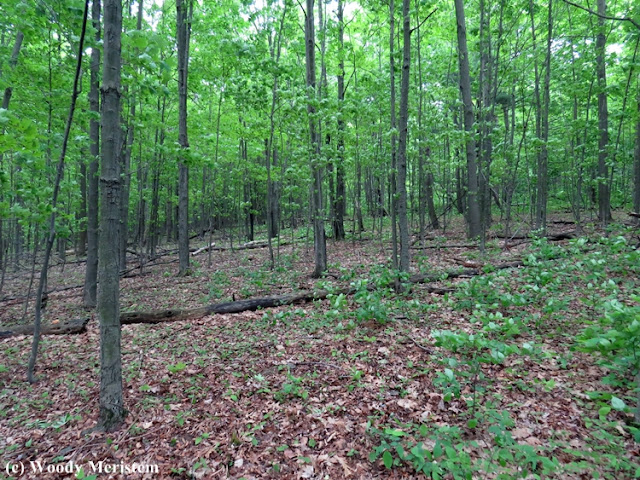 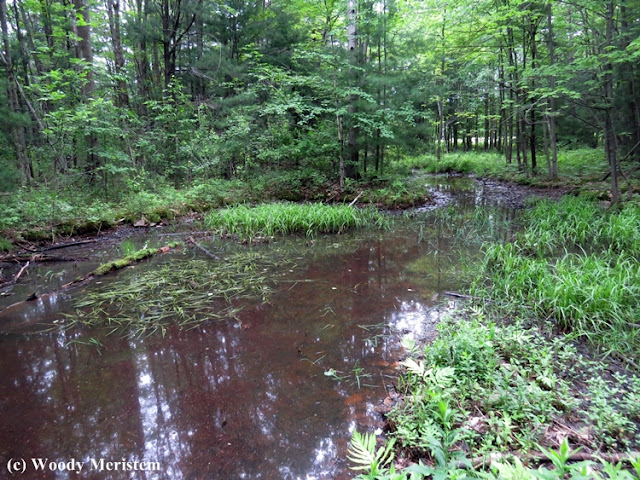 And along what had been a fencerow between the old fields – the large trees, some containing remnants of barbed wire, spoke of its history – 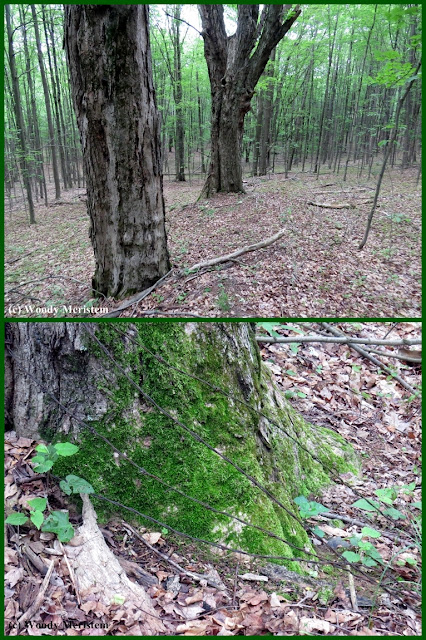 Because the old woodland had been a sugarbush several old roads gently climb the hillside. Sleds laden with tanks of maple sap had been drawn to the sugar house along those roads, there the sap was boiled into syrup – 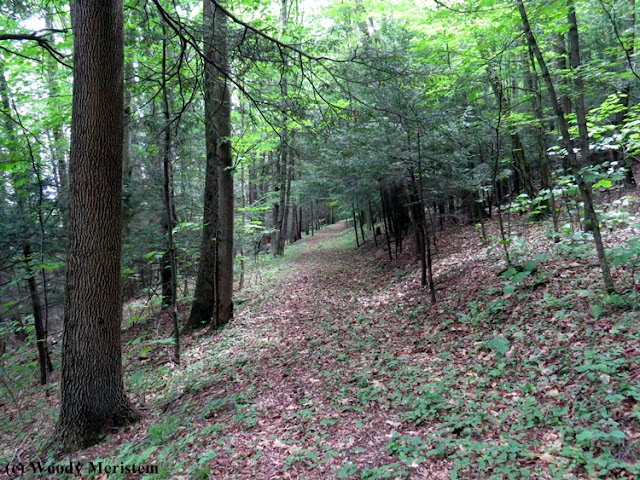 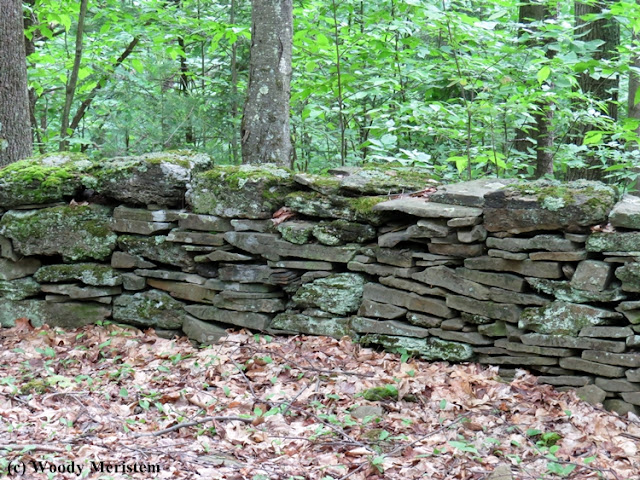 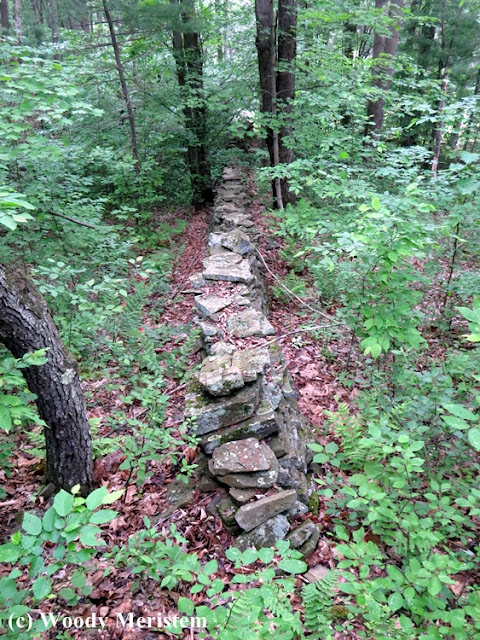 This isn’t an especially large property, but it’s quite diverse, has an abundance of wildflowers in the spring and is one that I’ve been fortunate enough to walk upon a number of times over the years.

Happy Thanksgiving to everyone - I'm thankful for the lady I've shared my life with for over 50 years, our daughter and son and their young folks (who now aren't so young) and the fact that I've been able to walk forest and field for well over half a century - and still can.

Posted by Woody Meristem at 6:29 AM 2 comments:

The camera trap was homebrewed, built around an Olympus point-and-shoot digital camera; it takes videos during the day and still images at night. The camera trap was in the Big Woods, in a patch of the woodland that had once been a field; a field that had been abandoned over 100 years ago.


White pine seed had blown into the old field, germinated and resulted in a scattering of trees. Because they were growing in the open without much competition from other trees those first trees grew quickly, and often had multiple trunks. Now, many years later, those old trees are beginning to die and a multitude of younger, smaller trees are growing among them.

The Big Woods are host to white-tailed deer, eastern coyotes, bobcats, black bear and a vast number of other species native to the northeastern forest. The camera trap was there to capture images of the inhabitants of this forest, and it did.


Black bears are intelligent, immensely curious creatures that seem to be drawn to anything new in their territories. Those of us who operate camera traps in areas with a population of black bears quickly become aware of how bears treat camera traps – not well, as can be seen in this post.

Did you notice the shadow of the bear?

Two weeks later the bruin was back again –

Of course, the bears aren't misbehaving they're just bears being bears – curious about this alien thing and satisfying their curiosity, scratching an itch and marking their turf.

Posted by Woody Meristem at 4:38 AM 9 comments: