Deer in the Snow

This has been one odd winter, warm and spring-like, then cold and snowy, then back again to balmy temperatures with the snow all melted. In mid-March, just before the snow that was forecast began falling, we scattered a bit of corn on the ground in an attempt – futile – to keep the gray squirrels away from the bird feeders.


Some squirrels fed on the corn but they prefer the sunflower seed in the feeders. With the snow came the white-tailed deer, the deer stayed for a while as the snow fell; they worked through the layer of snow to feed on the corn – 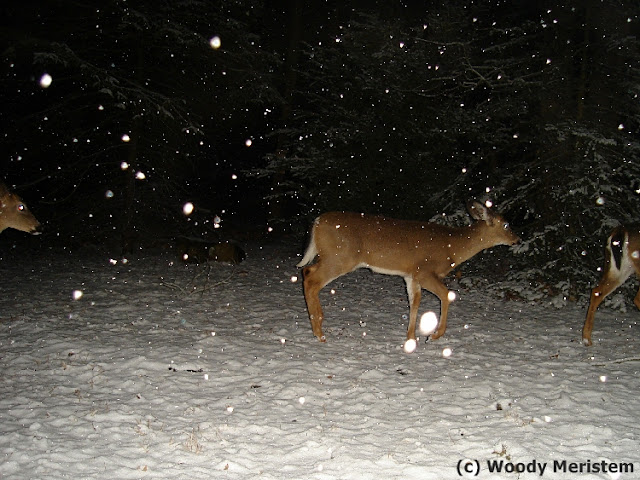 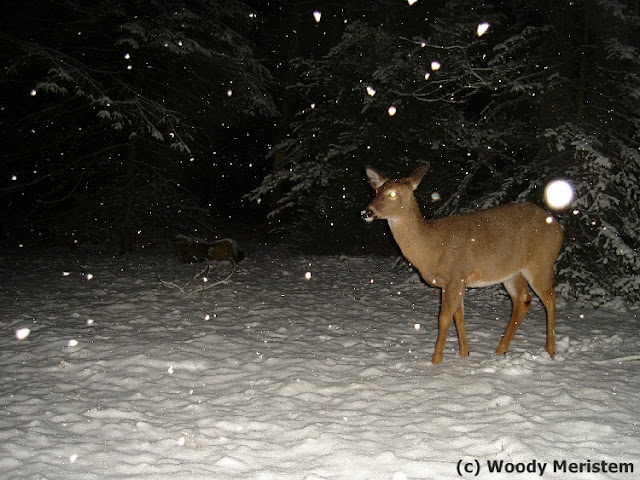 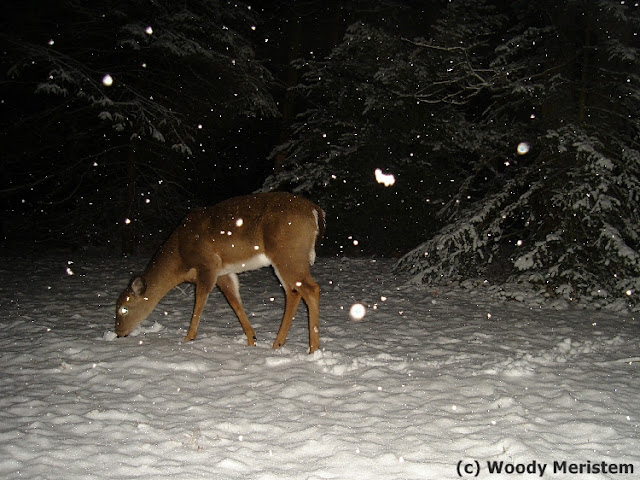 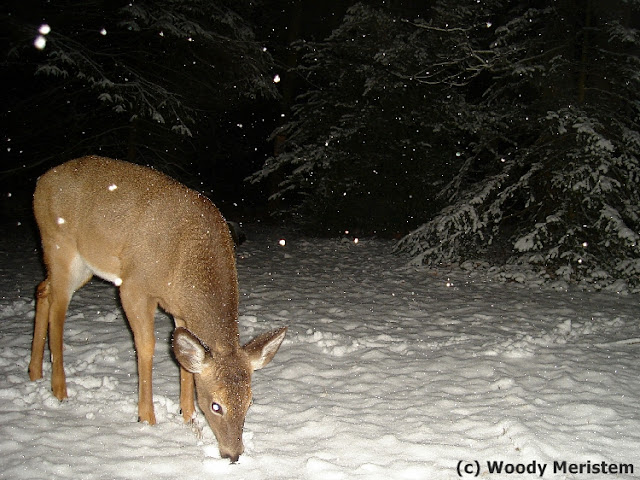 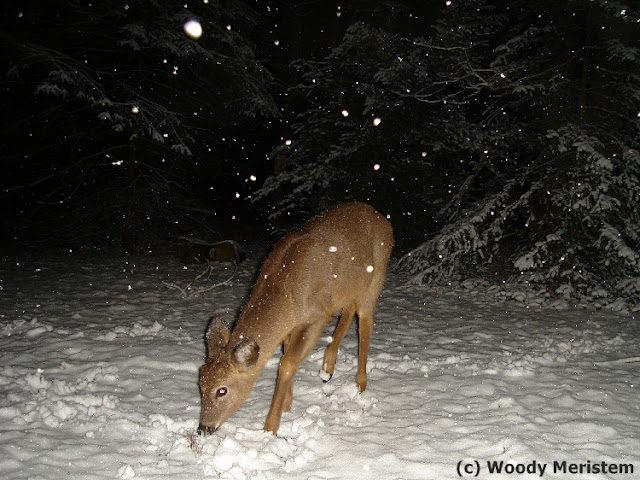 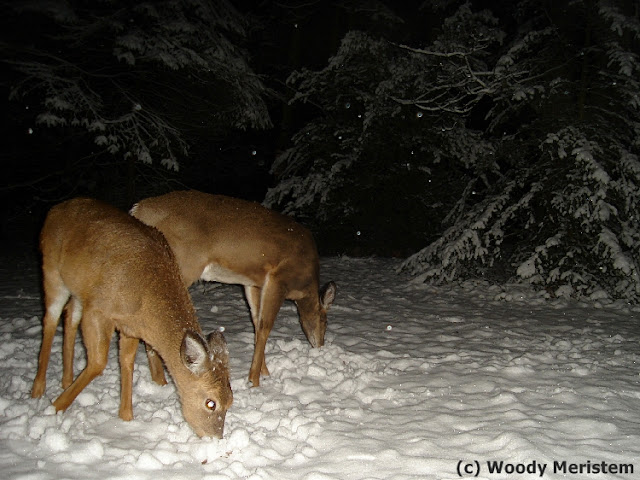 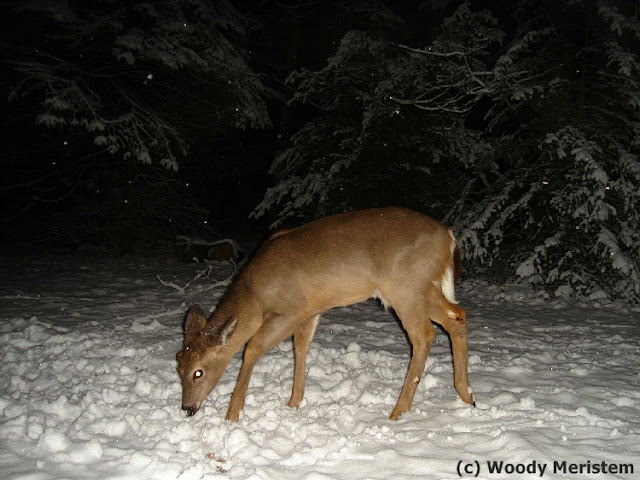 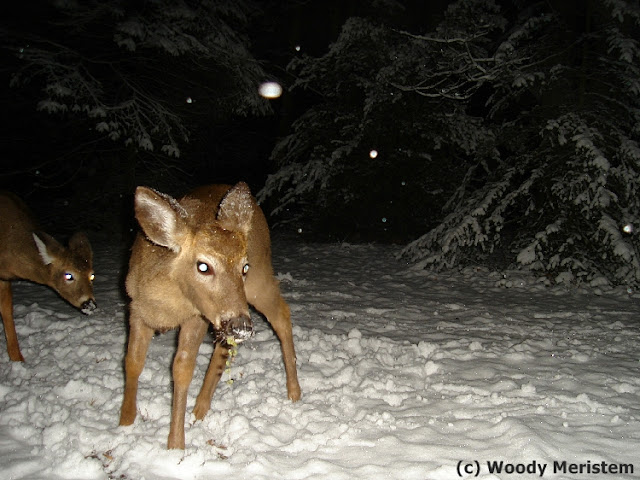 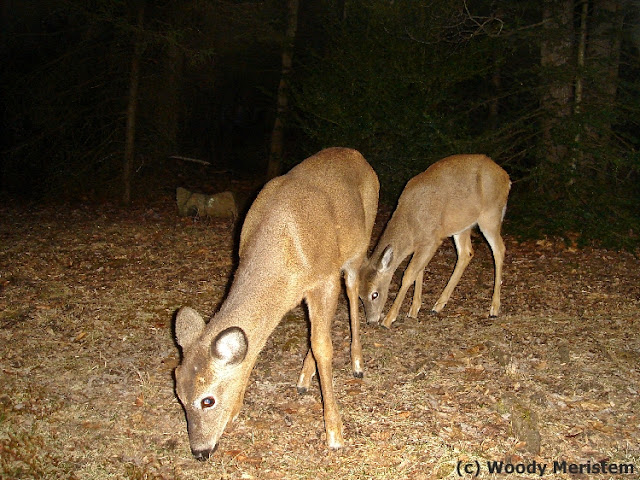 For a number of reasons we don’t deliberately put out corn for the neighborhood deer, but they couldn’t resist the small amount of corn that was put out for the squirrels.
Posted by Woody Meristem at 4:49 AM 6 comments:

From a Fallen White Pine


Fallen trees or logs are some of the best places to put a camera trap. At times I’ve set a camera trap at a long-fallen white pine; and sometimes place a “chirper” between the forks of the fallen tree. The chirper, which only operates at night, at random intervals produces a sound that mimics a small bird’s chirp. The chirper was used in hope of luring predators in front of the camera. Sometimes the camera trap has been positioned to look down the length of the log, other times at a right angle to the log. 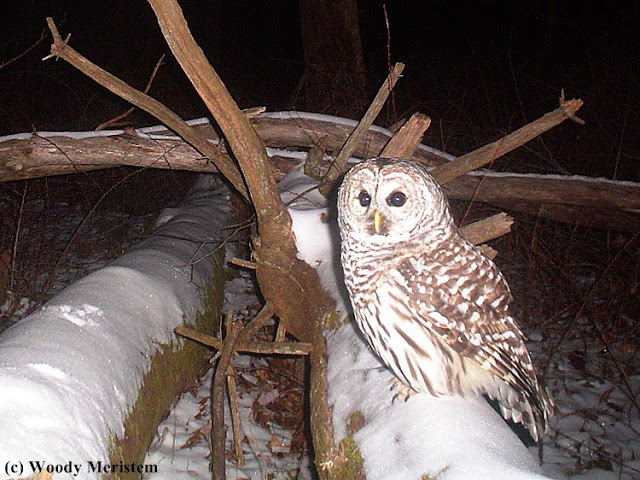 Followed a few days later by a raccoon – 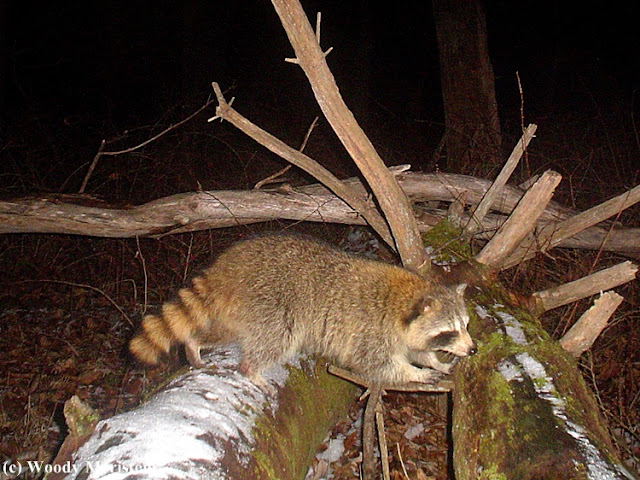 Squirrels were the animals most frequently photographed, both an occasional red squirrel – 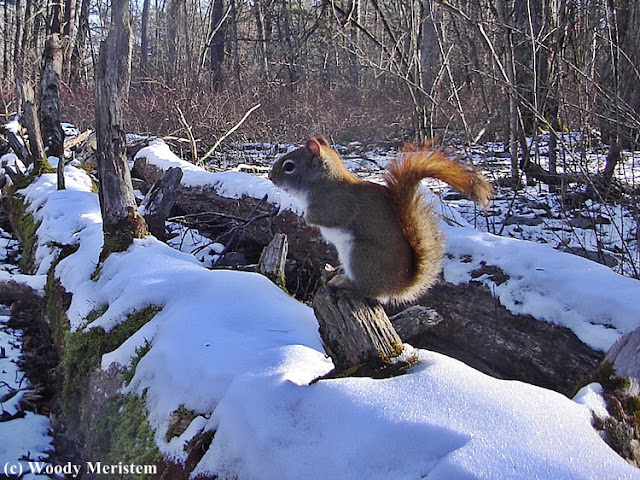 And the ubiquitous gray squirrels – 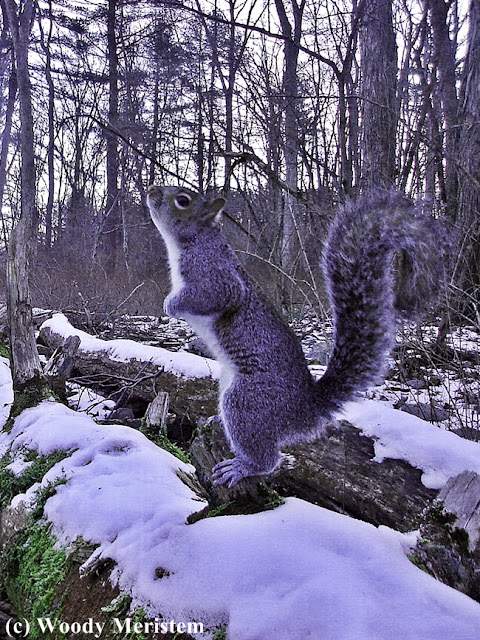 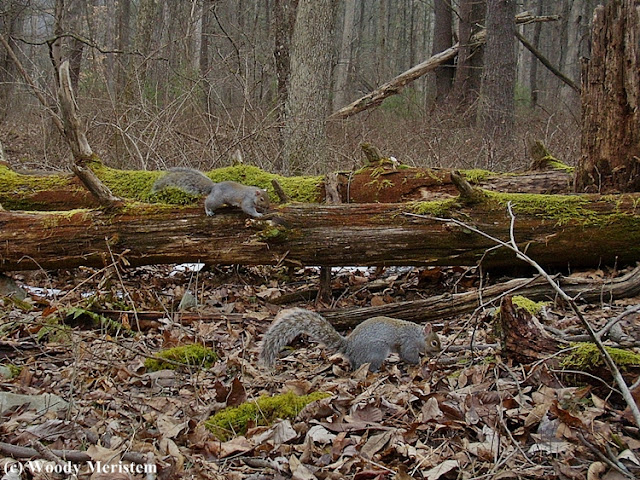 Both species of squirrel must regularly gnaw on something to keep their incisor teeth, which grow continuously, at a proper length. Hard nut hulls are frequently adequate for gnawing purposes, but often other items are the subject of the gnawing. One of the things the gray squirrels picked to gnaw was my chirper. The white areas on the chirper are where squirrels have chewed away at the hardened construction adhesive used to help camouflage it from human eyes.  – 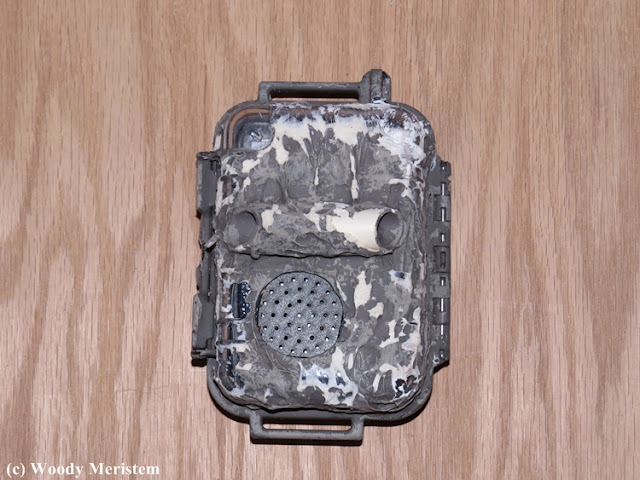 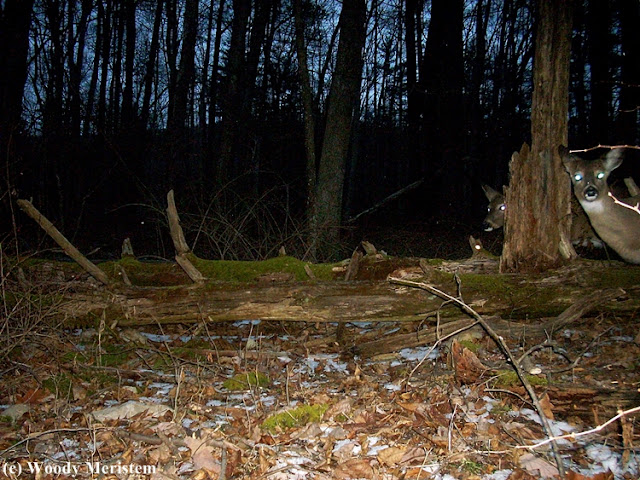 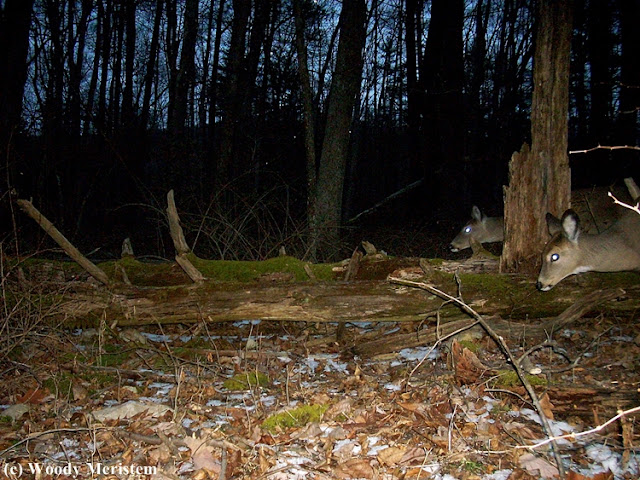 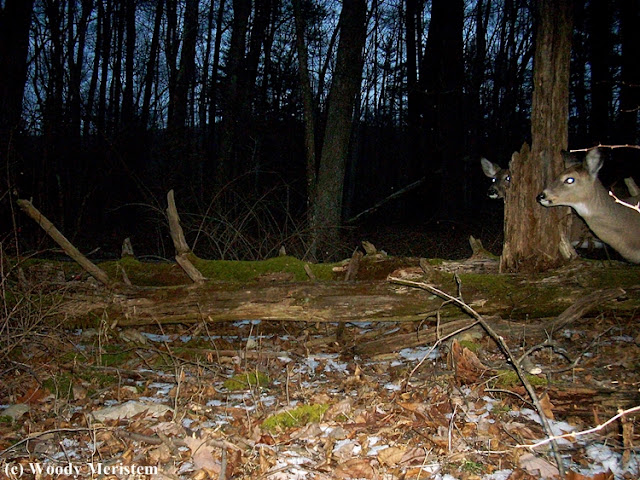 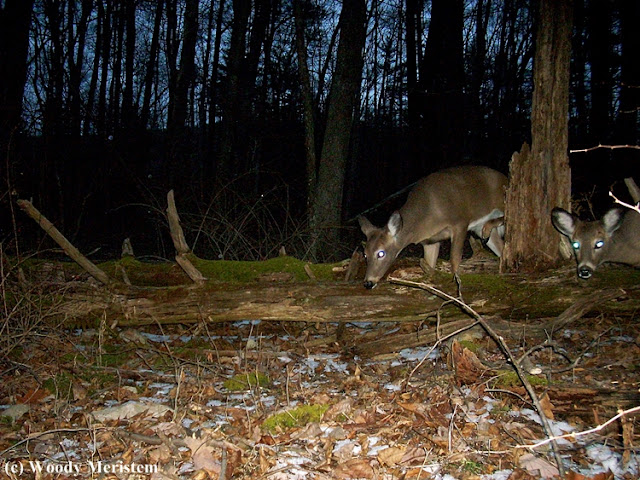 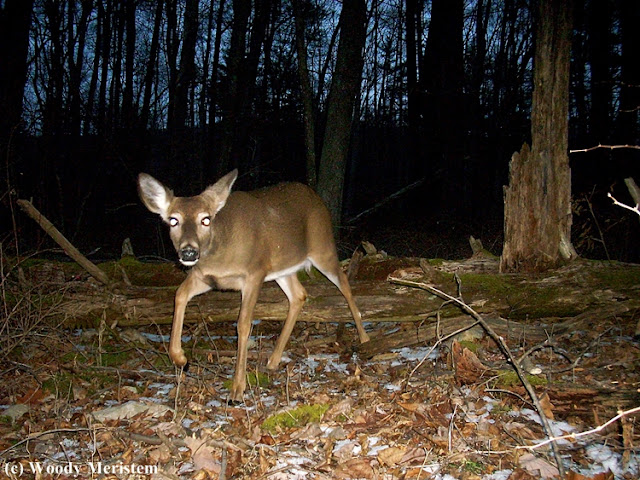 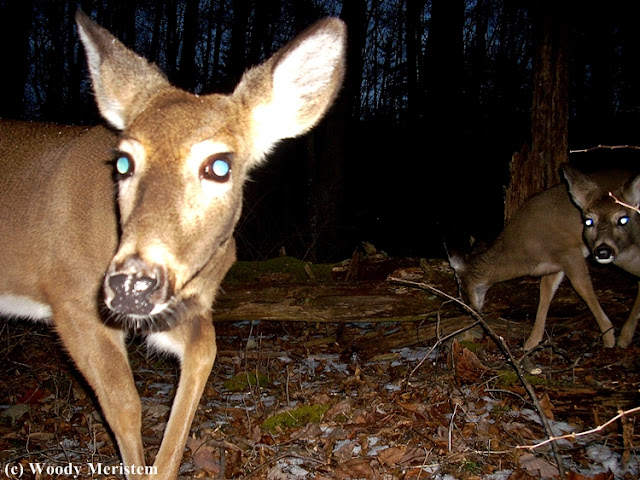 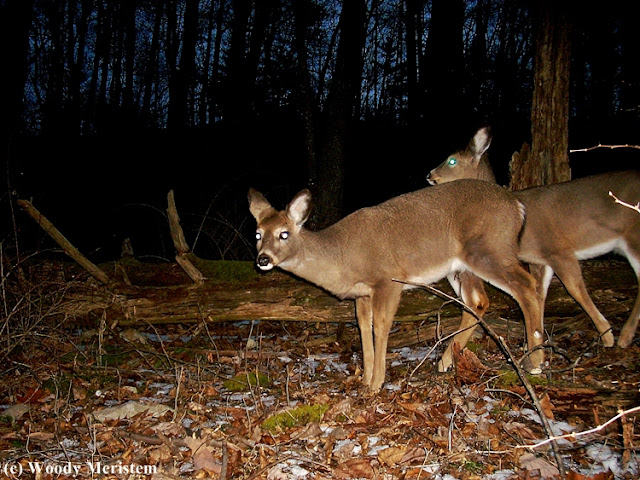 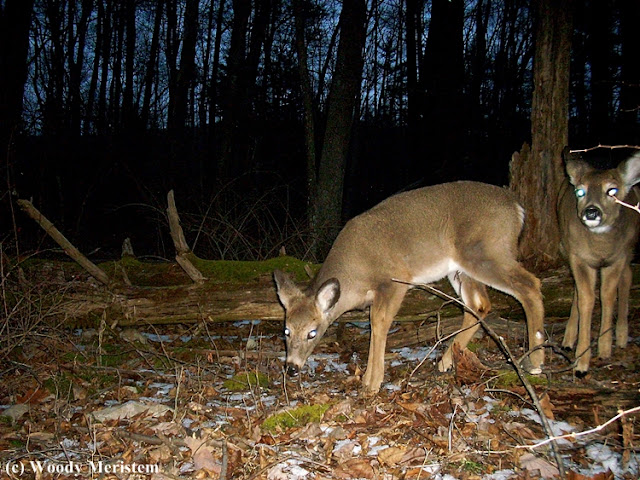 For anyone who thinks the white flash of a camera trap would scare deer, consider this – the camera (and its flash) took 31 photographs of this group of deer over a span of four minutes. 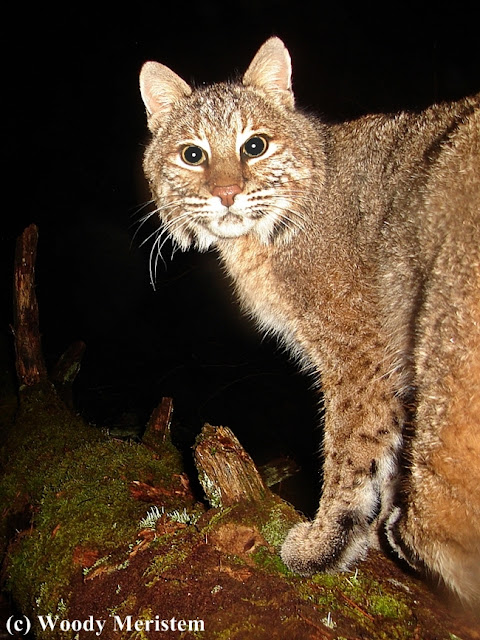 That's a sampling of the photos from the fallen white pine, we’ll see what the future brings.

Posted by Woody Meristem at 5:37 AM 8 comments:

It was a beautiful clear, cold winter morning – a good morning to walk along the river. The ice had gone out weeks ago so seeing some waterfowl was a possibility. But the only waterfowl to be seen were some common goldeneyes far from shore, much too far for good photos and in the shadow of a large passing cloud – 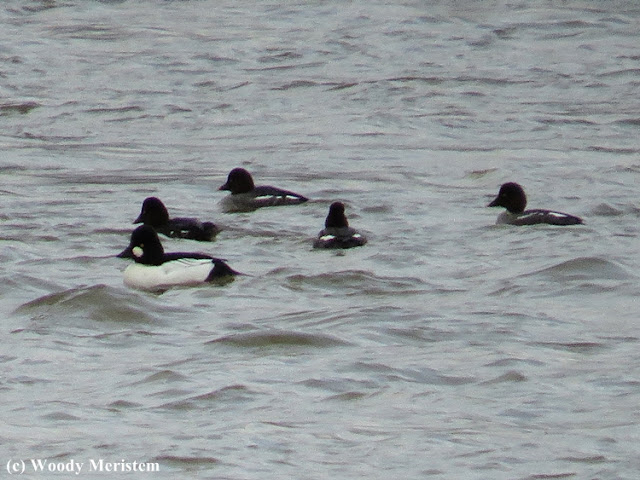 But a bit further on a loud “thunk, thunk” from a riverside tree caught my attention. There on the trunk of a silver maple was a male pileated woodpecker. He moved rapidly up, down and around the tree chipping here and there at the bark as he searched for the galleries of carpenter ants or the larva of wood-boring beetles. His movements were rapid enough that it was difficult to get a still photo of the bird – so here’s a short video of him hunting for a meal –

As I moved for a view unobscured by tree trunks another pileated that was out of sight sounded the bird’s raucous territorial/alarm call and off he went, flying upstream and out of sight.


Two years ago I’d seen a male pileated woodpecker along this same stretch of river; he’d also allowed a close approach and was also remarkably unwary for a pileated (posted here). Pileated woodpeckers are fairly long-lived birds, so it’s entirely possible this was the same bird.


Most of a mile further on, in the same tree where I’d photographed them before (posted here) was a peregrine falcon. All the peregrines I’ve ever seen seemed to ignore mere humans, whether just passing by or stopping to watch them. This bird was no different as I stopped to take a few photos – 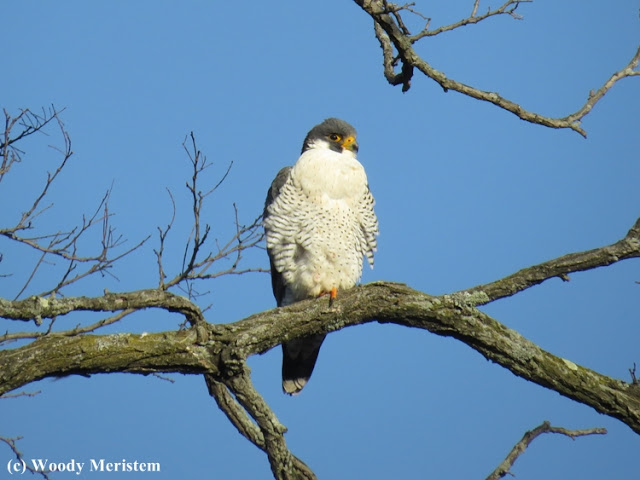 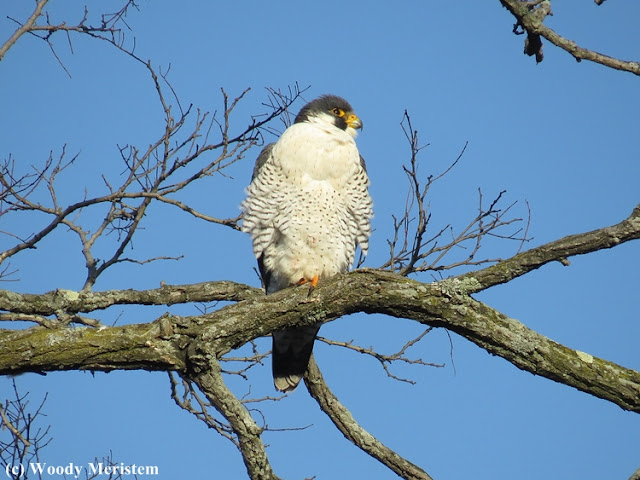 Another hundred yards along the way and there the second of the peregrine pair was perched in a riverside tree. Unfortunately, a few small branches hampered the view of the bird and there was no place from which to see the bird that was without interfering branches – 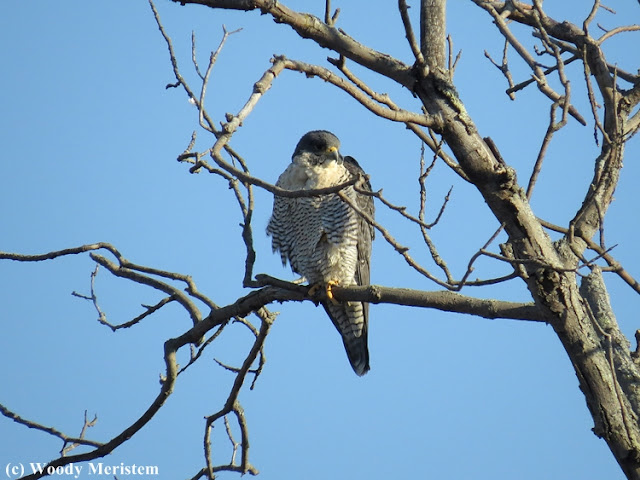 After three miles it was time to head for town to join friends for a cup of coffee and a blueberry muffin.

Posted by Woody Meristem at 4:40 AM 3 comments: