Time was when most farms in areas where sugar maple was abundant had their own sugarbush where, in the spring, the sugar maples were tapped for their sweet sap –

Those farms also had their own sugar shacks where the maples’ sap was boiled to reduce its water content and concentrate the sugar, turning the sap into syrup – 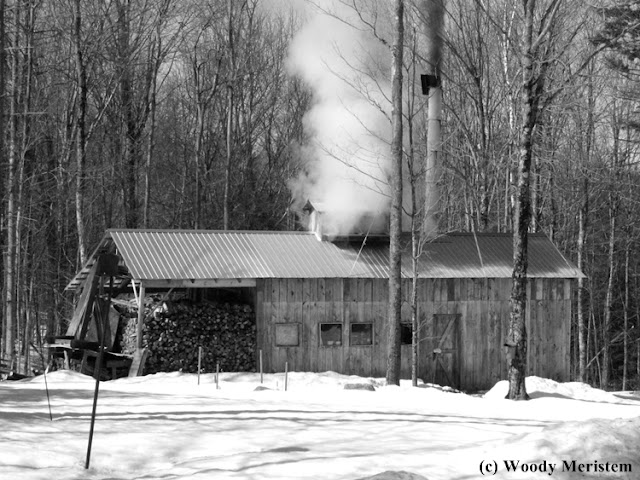 The days of the 5 or 10-acre sugarbush are, with the exception of what are essentially hobby operations, rapidly drawing to a close. Now there are sugarbushes with over 60,000 taps, miles of plastic tubing and vacuum pumps to convey sap to state of the art stainless steel holding tanks and gas-fired evaporators in large modern facilities. 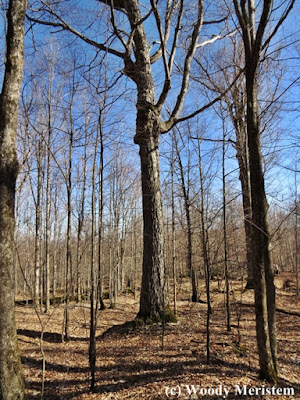 And those trees are certainly large – 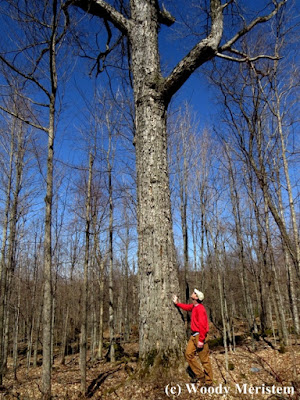 However, sugar maples that have been repeatedly tapped usually don’t live to see more than 150 springs. The trees in these old sugarbushes are declining rapidly and may all be gone in a few years – 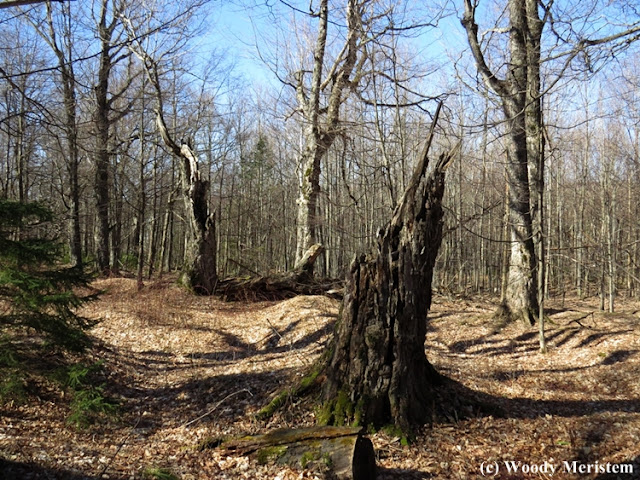 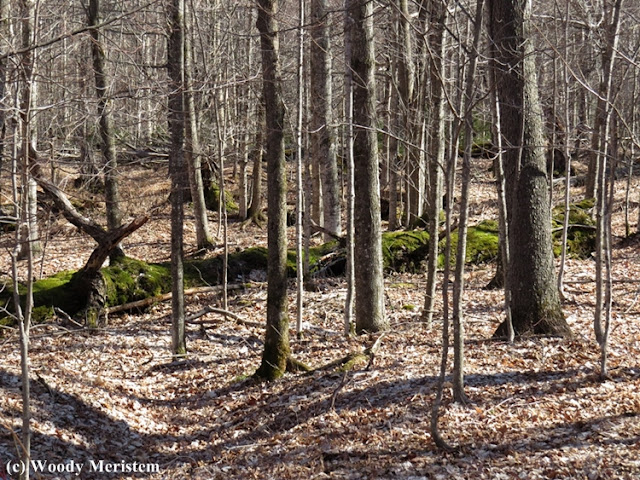 Just as the fallen trees decay, so too have many abandoned sugar shacks, leaving only a rubble stone foundation – 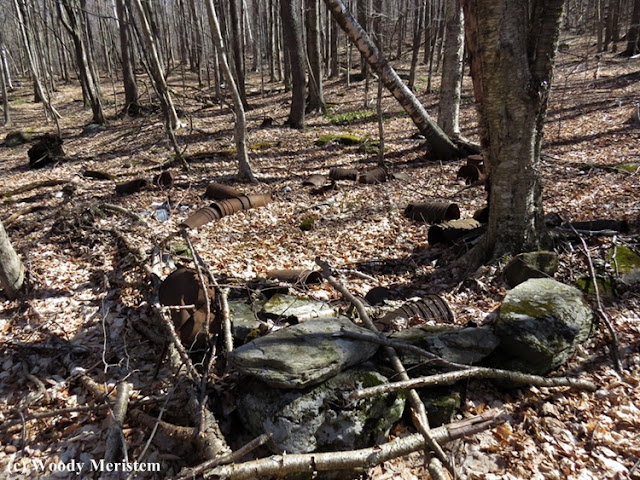 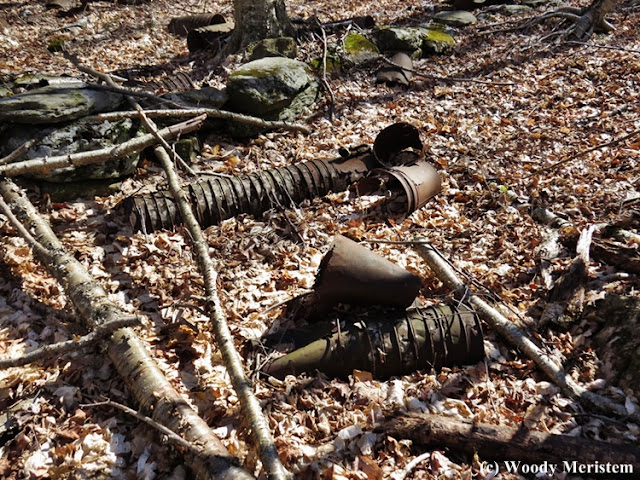 The remains of an old evaporator - 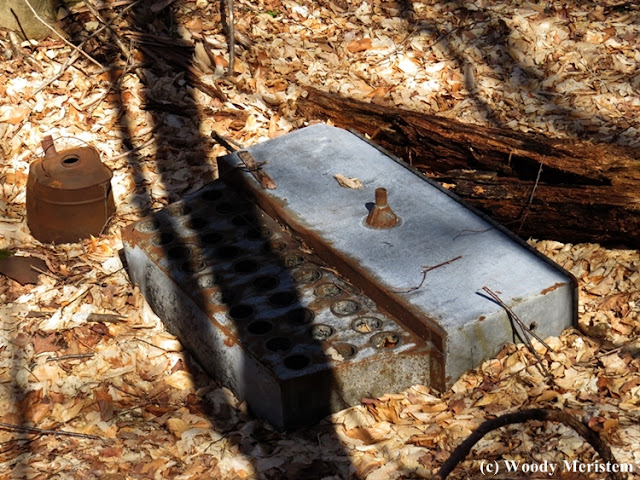 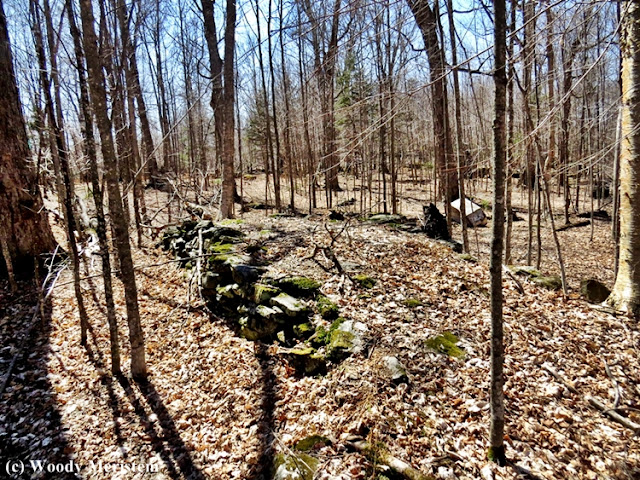 As the price of maple syrup and other products of the sugarbush have risen, the old ways and the old trees fade into memory.

Posted by Woody Meristem at 9:07 AM 2 comments:

Ducks On the Pond

Set a couple of camera traps on the edge of the pond hoping to get some photos of the wood ducks that occasionally spend some time there.

After a week the cameras got nary a picture of any wood ducks. But, it did get quite a few photos of the mallards that have taken up residence. 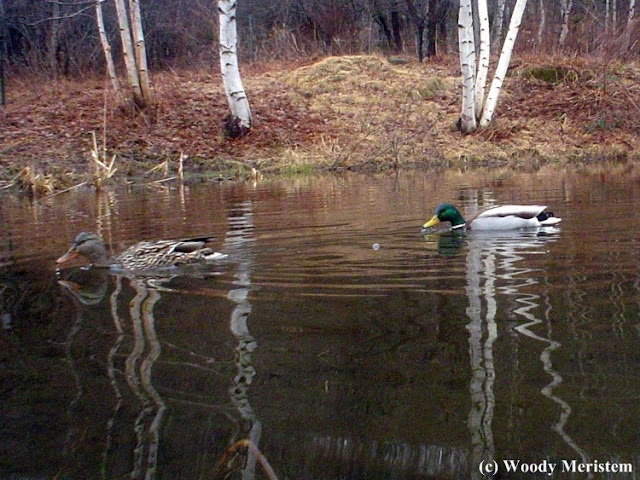 This quarter acre pond is an ideal size for black ducks. Historically black ducks were the breeding ducks of beaver ponds and small wetlands in the northeast. But, as northeastern woodlands were cleared for agriculture and wildlife agencies released mallards, which are easily bred in captivity, black ducks were genetically swamped by the closely related mallard 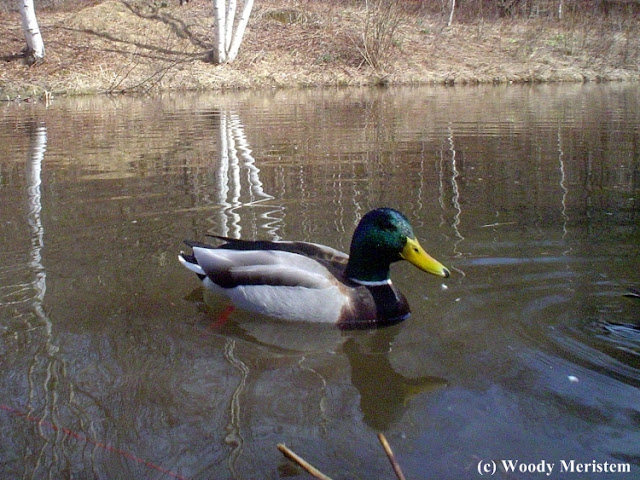 Although the mallard pair occasionally left the pond, presumably to feed elsewhere, they spent most of the day circling the shoreline, feeding almost continually. The female fed in the shallowest water, right at the edge, while the male fed in deeper water further from the shore. 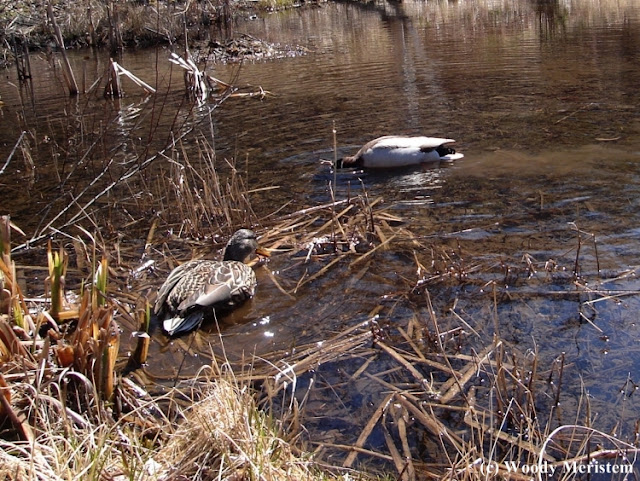 They spent most of the night, including at 4:00 am; doing the same - 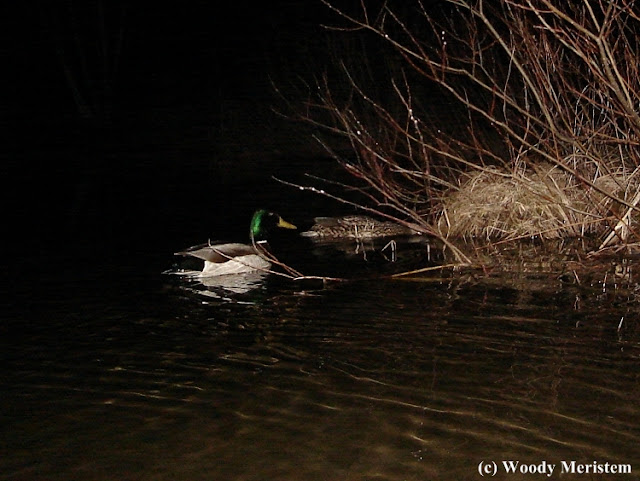 The female mallard (or her predecessor) has nested among the vegetation growing on a rock in the pond for several years. She had been spending time on the rock, creating a nest and apparently beginning to lay her clutch of eggs. 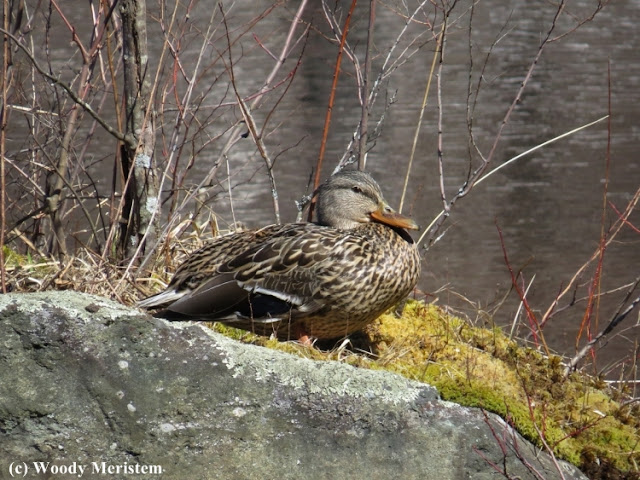 We were seated out of sight watching the pond and the mallards feeding when a raven suddenly flew down, landed on the rock, threw aside some nesting material, picked up a duck egg and flew into the adjacent woodland. All this happened too quickly for me to get any photos – and then the raven emerged from the woodland and flew overhead, having had its meal. 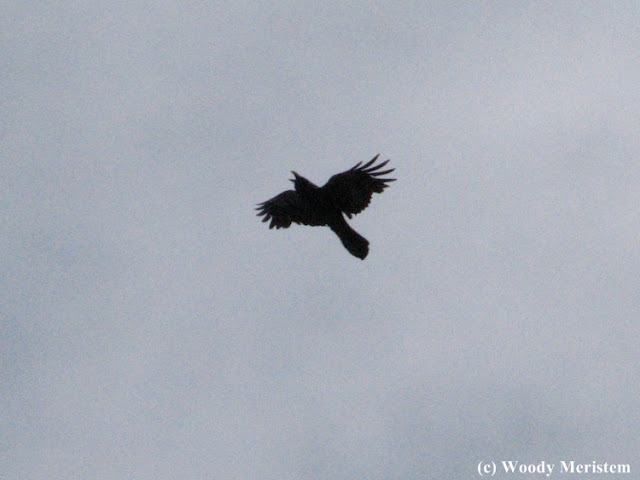 The question arises – did the raven happen to see the nest and its egg(s) as it flew overhead, or had this most intelligent of birds been periodically checking the nest to return each day as the mallard hen deposited each of her eggs?
Posted by Woody Meristem at 5:02 AM 2 comments:


Pity the poor opossum, to paraphrase comedian Rodney Dangerfield: It don’t get no respect.  Perhaps another opossum would consider a possum attractive, but not many humans would think any opossum was good looking – 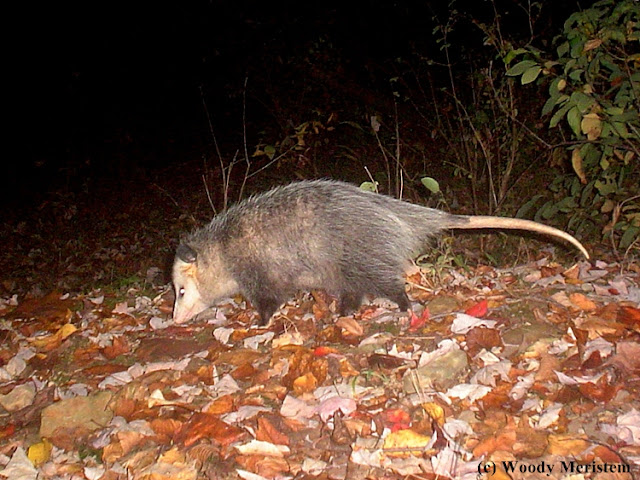 And, some look worse than others – 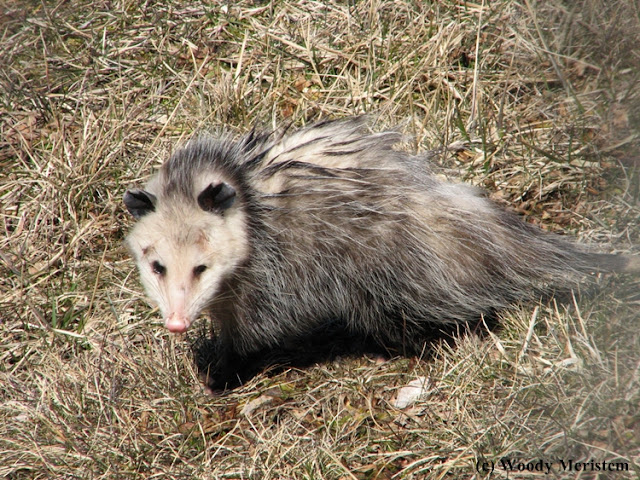 Opossums are marsupials, bearing tiny young that have to make their way to the mother’s pouch where they nurse and grow for several months.

Although originally considered a southern species, opossums have expanded their range northward over the years and are now even found in southern Canada. With their naked tails and sparse hair possums are poorly suited to cope with winter in the northern part of their range. 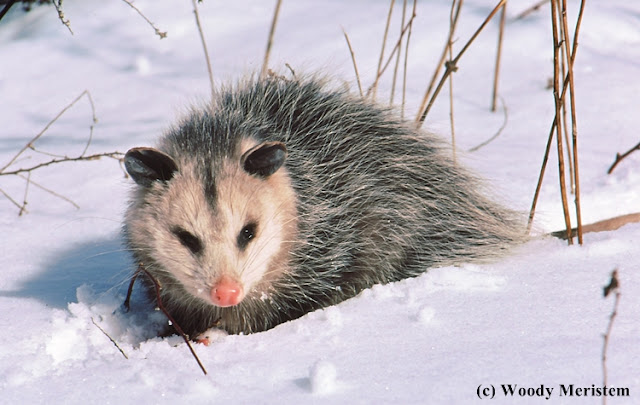 Possums will eat almost anything edible, rotten or not. Many years ago a friend, who ate a lot of wild game, described woodchuck meat as quite tasty but reported the meat of the one and only possum he’d ever eaten as extremely greasy, even vile,  and said “Never again!”

Opossums are short-lived, a three or four year old opossum is “ancient”; their average life span is less than two years.

Opossums frequently lose portions of their ears or tails to frostbite. Perhaps that’s what happened to this possum’s tail – 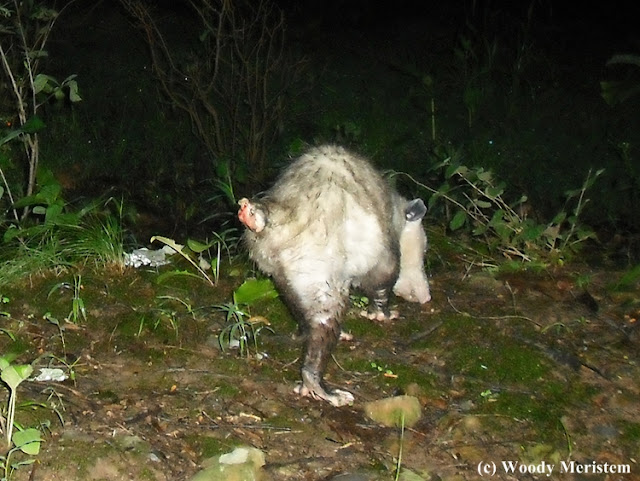 That photo, taken on July 5, 2015, is from a camera trap above the house. The same animal was again caught by a camera trap on March 19, 2016. The tail’s stub still appears raw after many months – 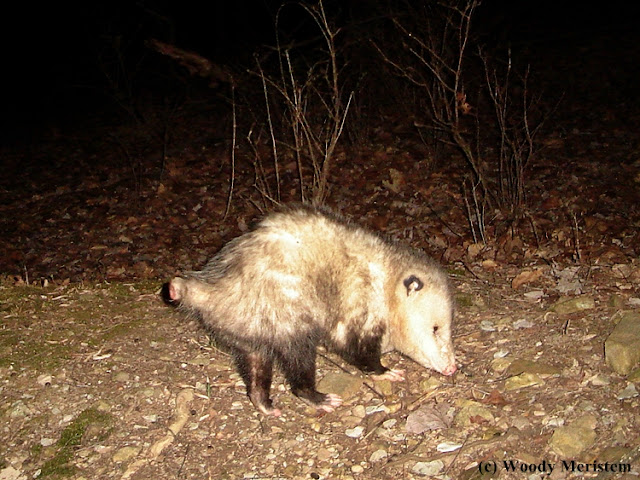 So, perhaps we should pity the poor possum. But, only as an individual, as a species it’s a survivor with ancestral forms going back for over 50 million years. As a species they deserve the respect due to survivors of adversity.
Posted by Woody Meristem at 5:12 AM 4 comments:


An early spring day seemed like a perfect time for a hike in northcentral Pennsylvania’s Bear Pen Hollow. Pennsylvania has Bear Pen (and Bear Trap) Hollows beyond counting; some are shown on the topographic maps produced by the U.S. Geological Survey but there are many others that have not been “officially” named. Those valleys are named for the log or metal bear traps that were once located there. A number of years ago several of us found one of those metal bear traps, now long abandoned. 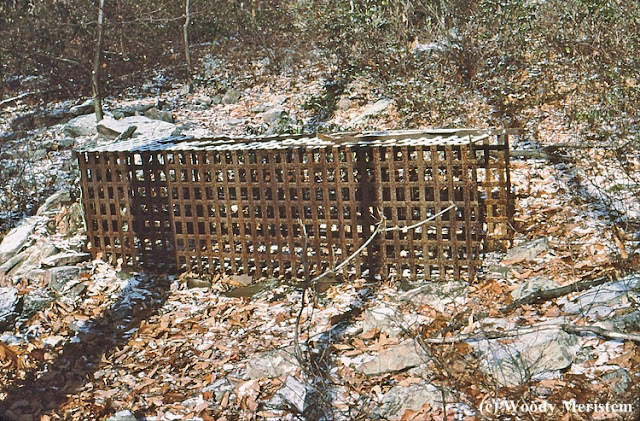 The stream in this valley isn’t large, but it’s a fairly high gradient stream, falling a bit over 500 feet in about a mile. As it flows along it drops over the rocks that make up the bed of the stream, forming a succession of tiny waterfalls. 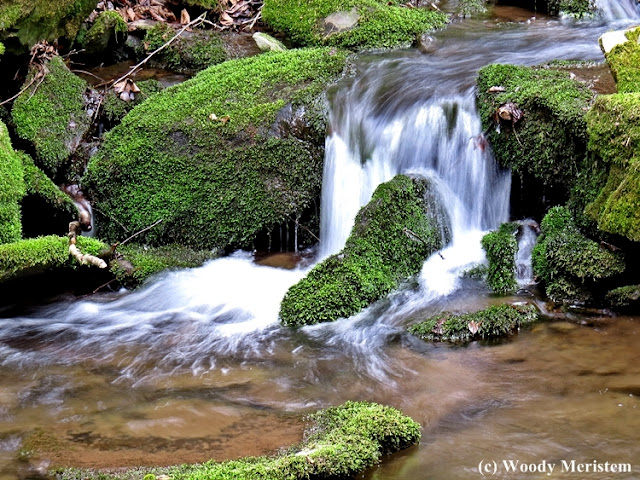 However, it’s quite possible to enjoy a beautiful waterfall without traveling hundreds, or even thousands, of miles. Take a walk up any high-gradient stream and you can enjoy waterfalls. 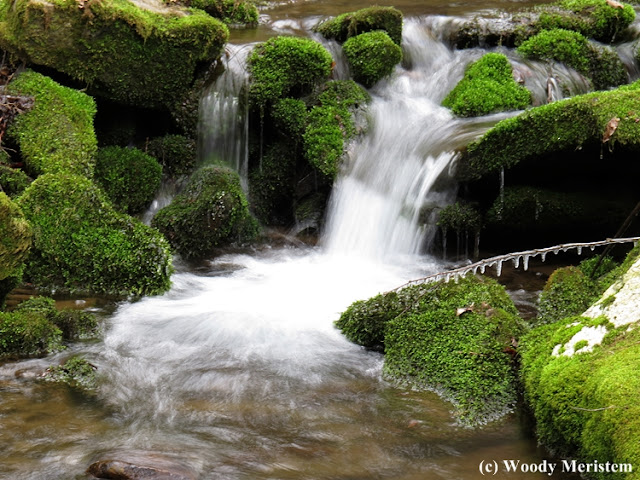 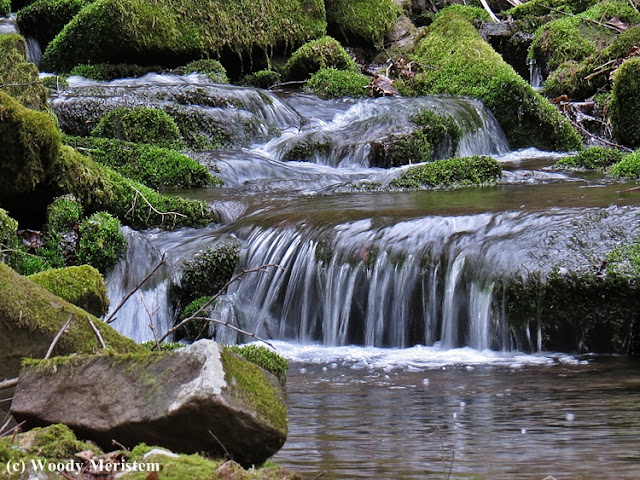 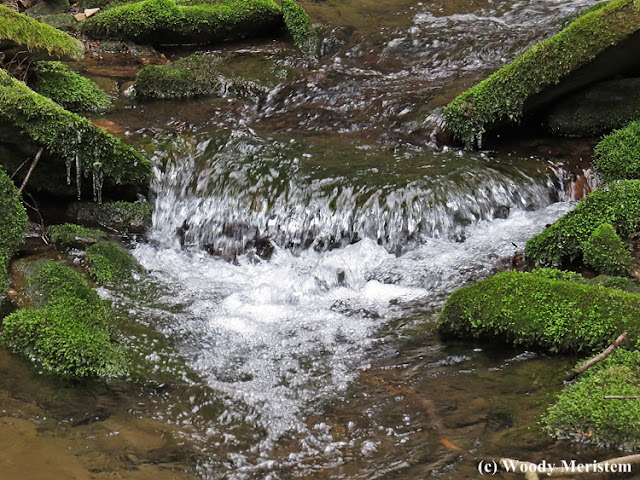 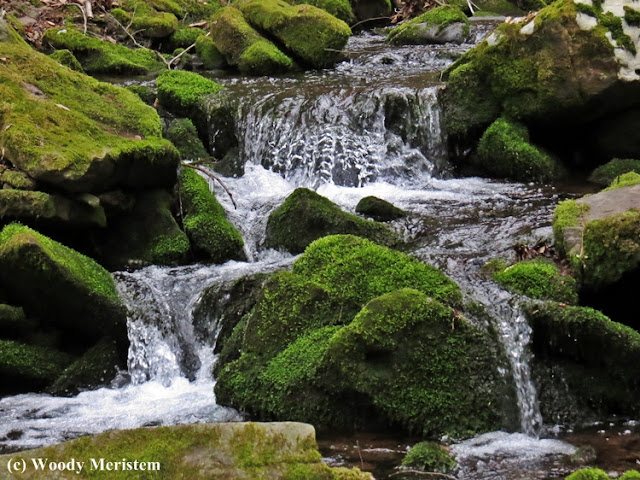 Friends and I have enjoyed mini-falls like these for many years as we’ve hiked the hills of northcentral Pennsylvania – there are probably a few mini-falls on a stream near you.
Posted by Woody Meristem at 5:20 AM 3 comments: