More from the camera traps 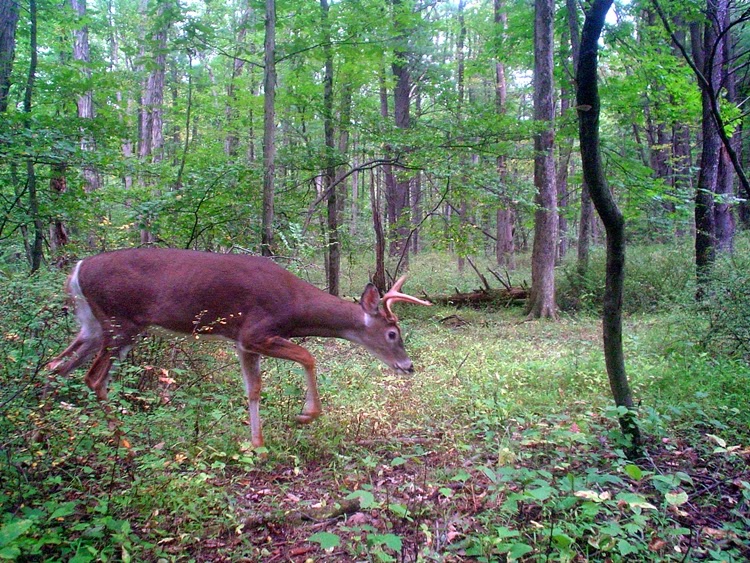 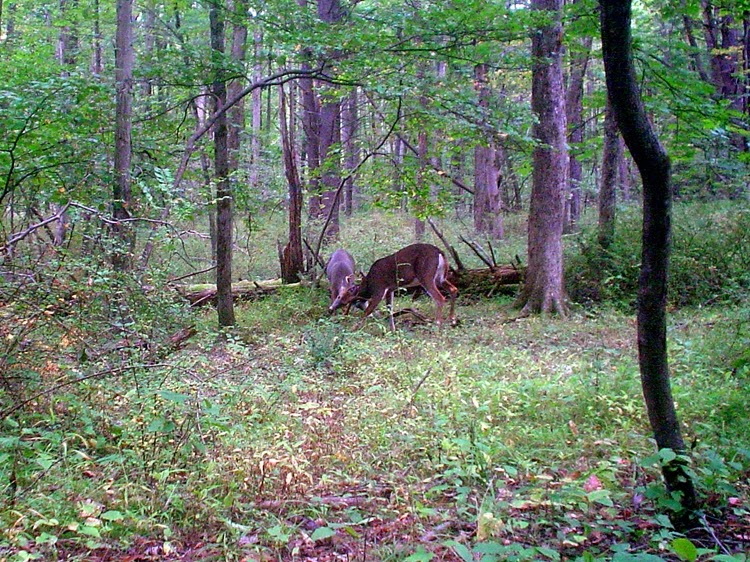 But this bear wasn’t too far from the camera; it was way too close 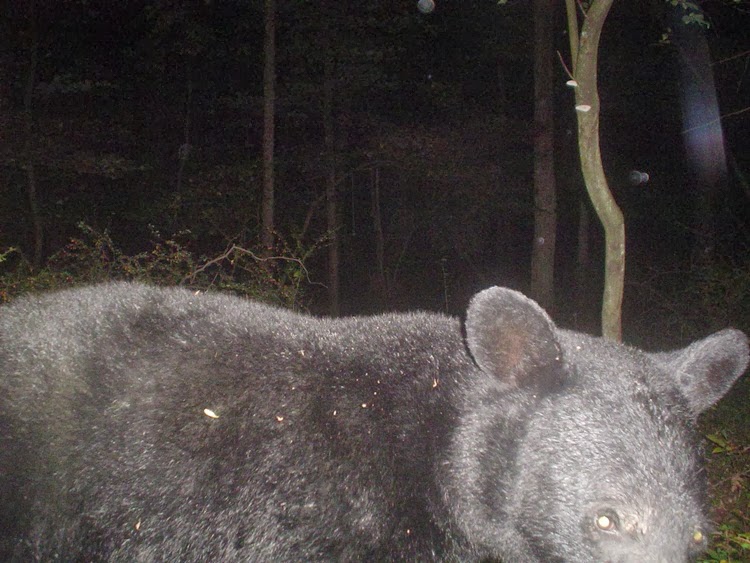 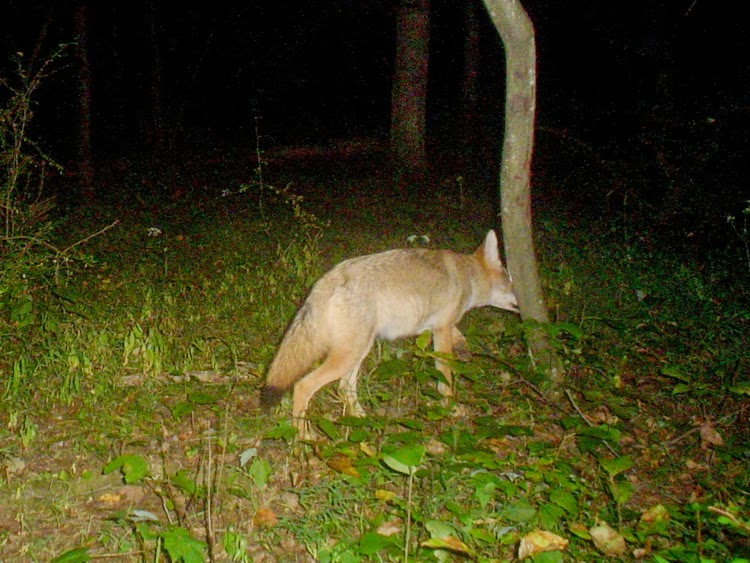 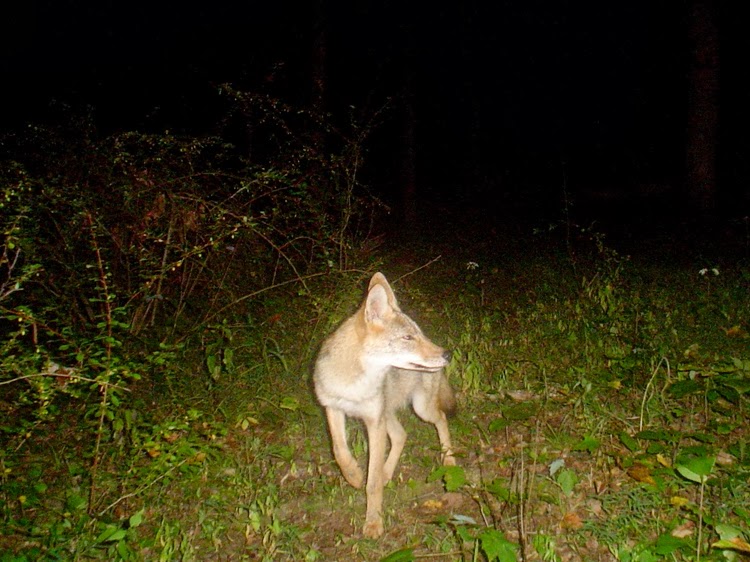 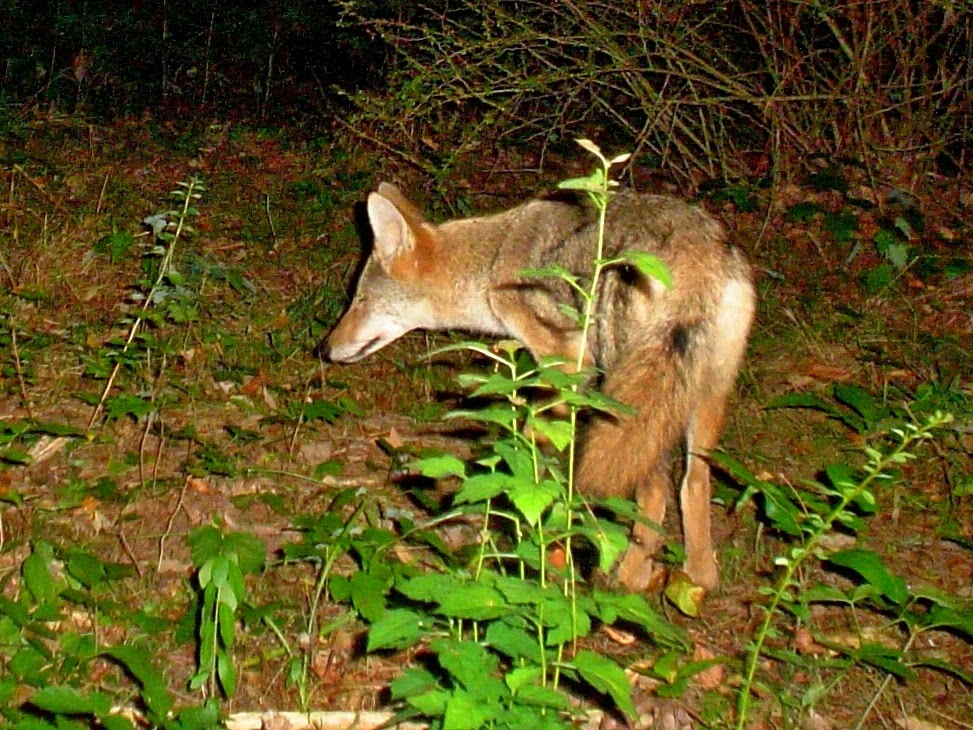 With all due respect to deer and turkey hunters who often hate them, coyotes happen to be one of my favorite mammals - smart, adaptable and real survivors 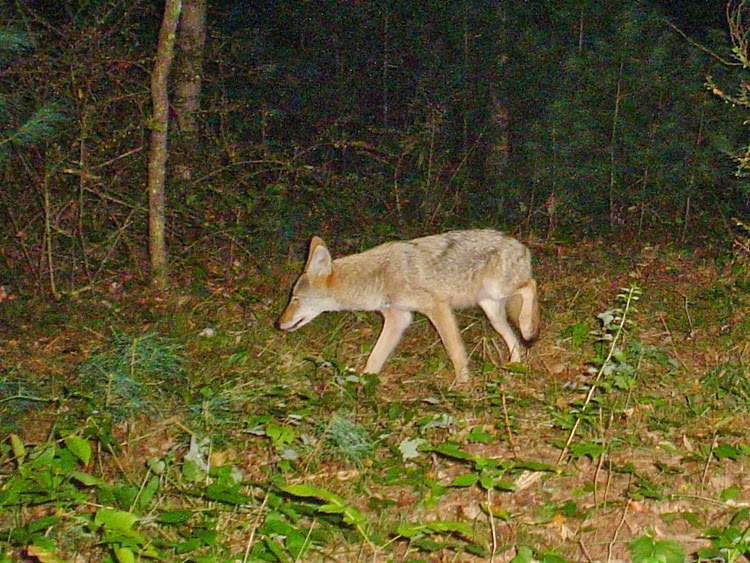 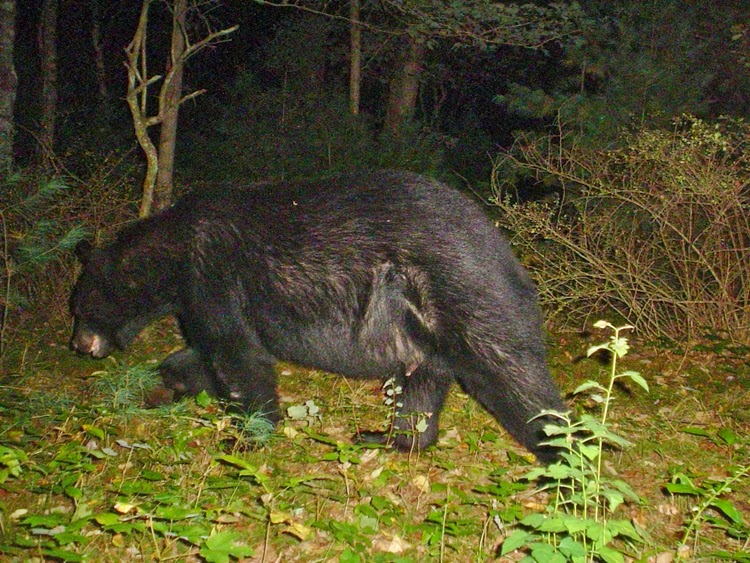 Bears are very inquisitive and frequently bite, lick and/or maul cameras. With their tremendous strength a bear examining a camera trap can easily damage it. Raccoons also bite, lick and/or maul cameras, but usually don’t damage the camera. Humans are another matter, although most folks finding a camera trap just peer at it and move on.
But, there are those people who just can’t leave things alone. Some of them break stuff they find just for the heck of it; others decide to make off with whatever they find. Anyone who leaves a camera trap out in the forest or field runs a risk, and not infrequently returns to find their camera trap damaged or missing. Last year one of my camera traps had several photos of someone looking at it. Fortunately he was an honest fellow and left the camera alone.
Since various hunting seasons are just around the corner, I decided to bring my camera traps in from the Big Woods. With more people in the woods the chance of one of them being a vandal or thief and finding one of the cameras goes way up. The camera traps near the house will stay out, capturing the critters that spend time nearby.

'nuf of that – back to sorting the photos on the cards in the other camera traps I brought in.
Posted by Woody Meristem at 2:21 PM No comments:

Since the 1970s I've made occasional trips to see and photograph the elk of Elk County, Pennsylvania. Back then both elk and tourists were scarce and those of us who visited the area didn't see many of either. Things have changed in recent years -- there are more elk (around 800) and, since the promotion of the elk herd as a tourist attraction, many more people.The increase in elk-tourism has made it much less pleasant to visit the area, but as long as the effort is made to get several miles from a road and the tourist-jams it's still a very worthwhile experience.

With the recent change in the weather from hot and humid to more autumnal conditions, it was time to go in search of elk. By arriving just after dawn, people were scarce and the elk tended to be out feeding in openings before retreating to denser cover. Then, toward dusk, a walk of several miles got me away from humans and closer to a number of elk. 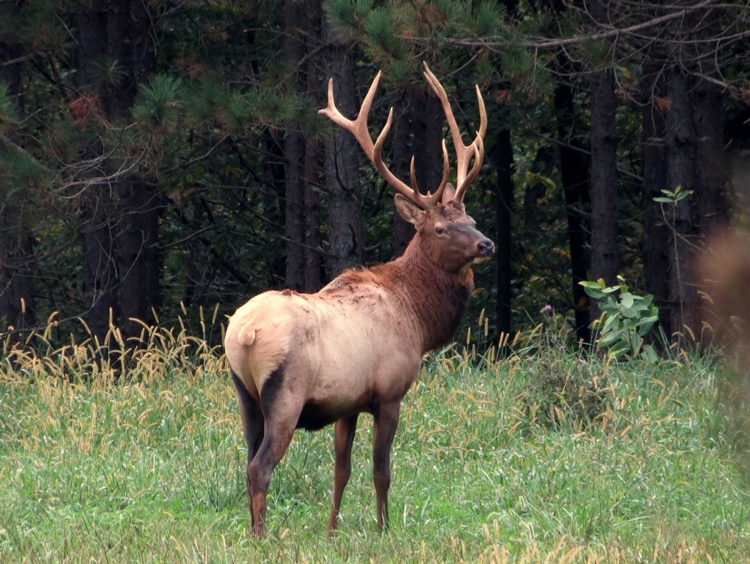 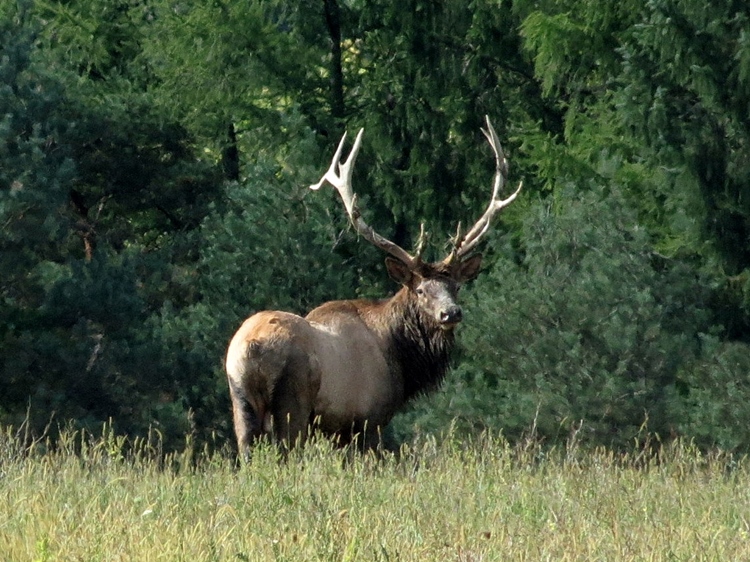 These two young bulls spent quite some time sparring - 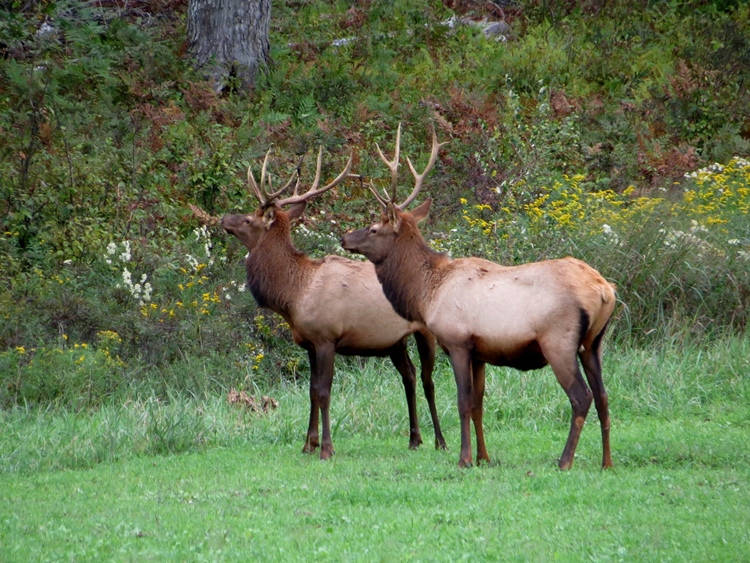 Once upon a time -- before the arrival of European settlers -- elk inhabited all of what was to become Pennsylvania. The elk's primary habitat was probably extensive meadows along major rivers and streams that were created and maintained by Native American agriculture and the fires they set to improve hunting. With the coming of European settlers elk were intensively hunted with the last individuals apparently being found in Cameron County and (the appropriately named) Elk County -- before 1880 they were totally eliminated from the state.

The burgeoning interest in conservation in the early 1900s led to the re-introduction of elk to Pennsylvania in 1913; with most of the original stock coming from Yellowstone. Abandoned farms and regeneration of forests following the extensive logging of the late 19th and early 20th centuries provided excellent habitat and the animals appeared to prosper, leading to hunting seasons from 1923 until 1931. Then the population collapsed until only a few animals survived – once again in Cameron and Elk counties.

By the early 1970s the population numbered about 65 animals that appeared to be a nuisance to authorities as some were shot by farmers for crop damage, other were shot by poachers or “in mistake for deer”. But finally there was a change of heart and the elk were seen as an asset: a magnet for tourists and potential game animals. Forest management on public land was altered to improve elk habitat and open fields were created; with the improved habitat the herd has increased to about 800 animals and has spread beyond its core range.

But, as the population increased so did the publicity surrounding the animals which were seen as opportunities for both "eco-tourism" and hunting. And so, viewing areas have been created for those who can't, or won't, view the elk in a more natural setting and a limited hunting season has been instituted.
Posted by Woody Meristem at 6:43 PM No comments:

Latest from the Camera Traps

Checked several of my camera traps and found that they've been disappointingly unproductive in the last few weeks. But, they continue to produce some nice photos:

of a young white-tail buck - 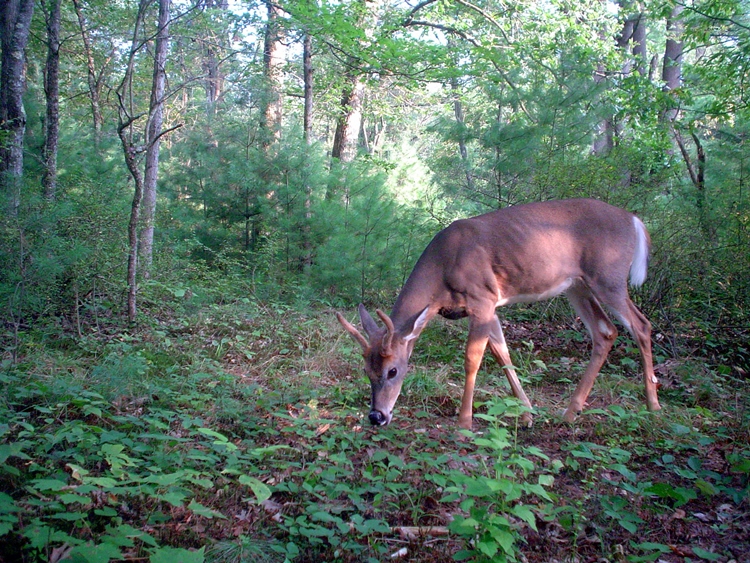 and a young black bear - 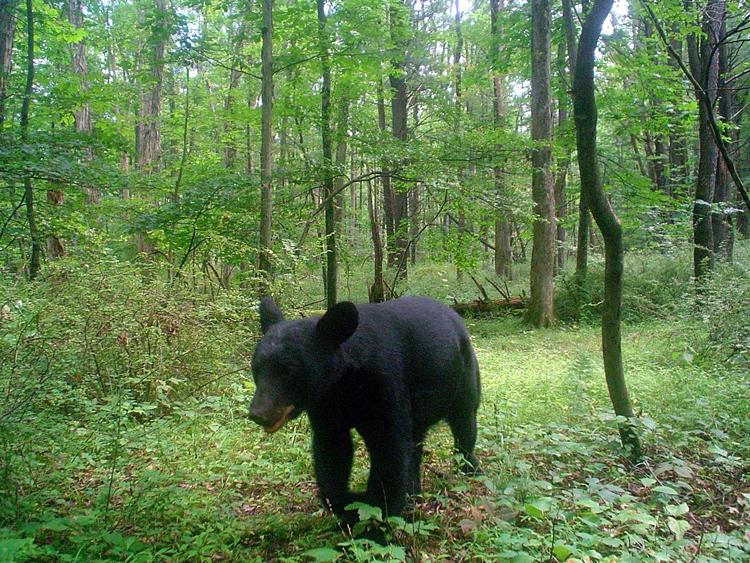 It's been really dry here for the later part of the summer, with only an occasional small evening thunderstorm. One of those storms apparently caught a black bear when it was near one of the camera traps and the bear proceeded to shake itself as would a dog. The shake was in front of a camera - its flash stopped the water droplets in mid air. 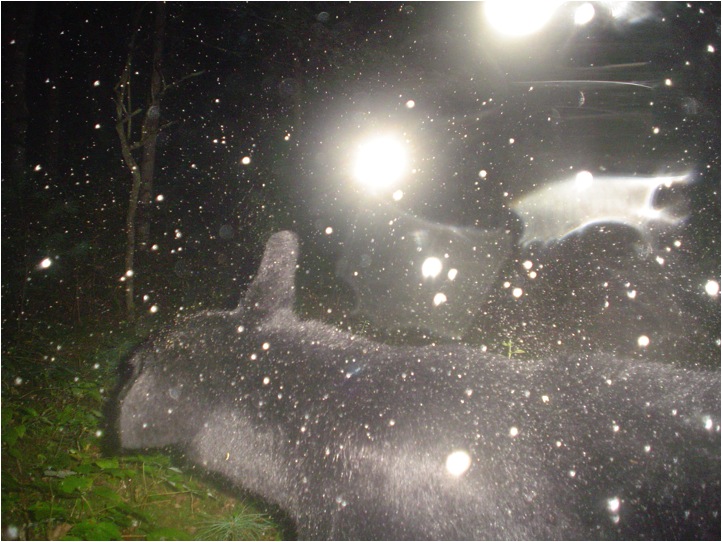 And then there was the camera that only managed to get photos of the webs that spiders had spun in front of the flash and lens. The spiders apparently went to work immediately after the last time I'd changed the card and batteries because all 40+ photos were blurred images of the webs. 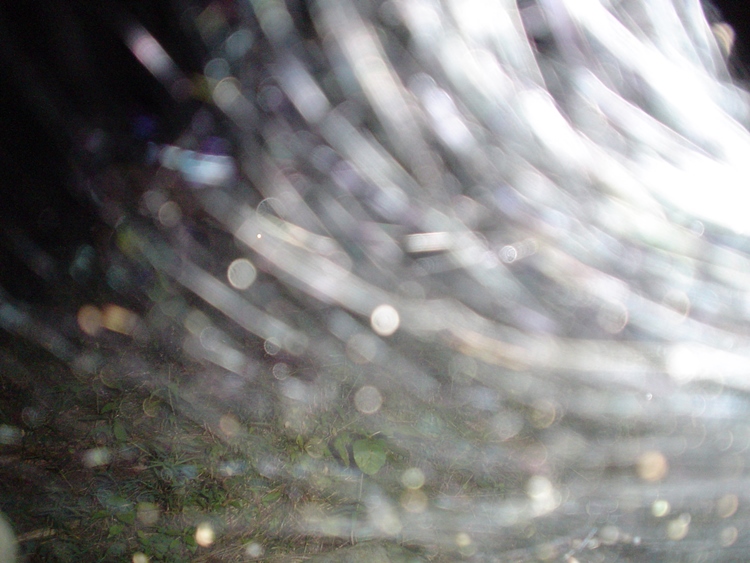