Most of the barns to be seen along the roads of northcentral Pennsylvania were built between 1850 and 1910. Some, but apparently not many, are older and there are also some of much more recent vintage.

The majority of the older barns are those called “Pennsylvania bank barns” which have access to both levels from the ground, they have a forebay where the upper level of the barn extends over the lower level on one side. Bank barns were usually built on sloping ground with the forebay on the downhill, preferably south-facing, side. The forebay shelters livestock from rain and snow. 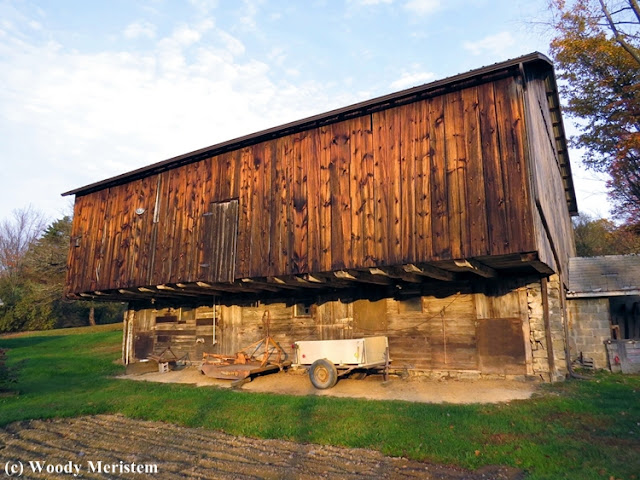 Bank barns are found in the areas that were settled by people migrating from southeastern Pennsylvania who were of German ancestry. Somewhat similar, but older, barns exist in southern Germany and parts of Switzerland and Austria.


The northern tier of counties in Pennsylvania were settled by people who moved west from southern New England, their ancestors had come from the British Isles so they built barns in the English style without a forebay and sometimes on level ground. Many of the barns of both styles have been modified and had additions over the years. 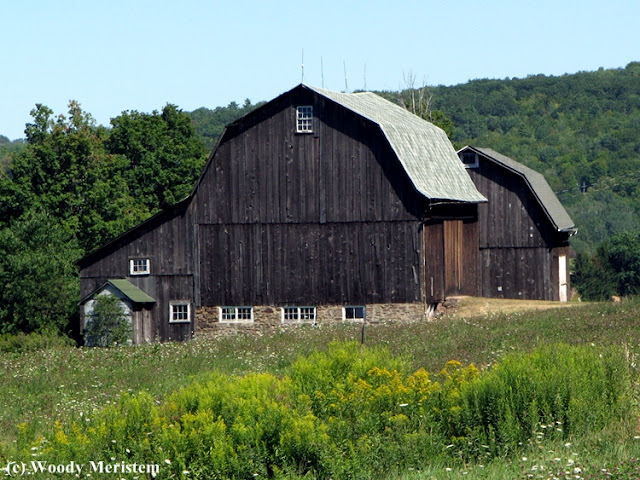 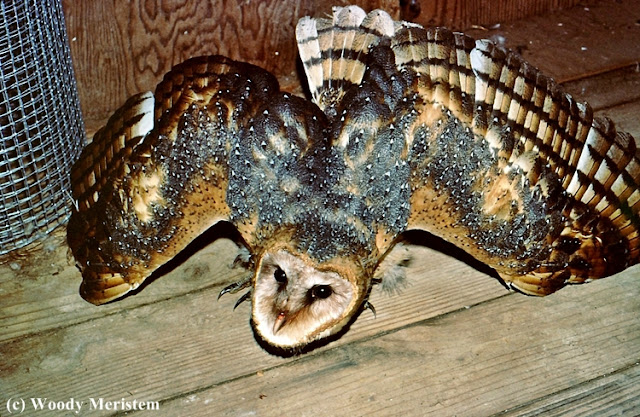 Most are inhabited by bats and mice, which attract black rat snakes – 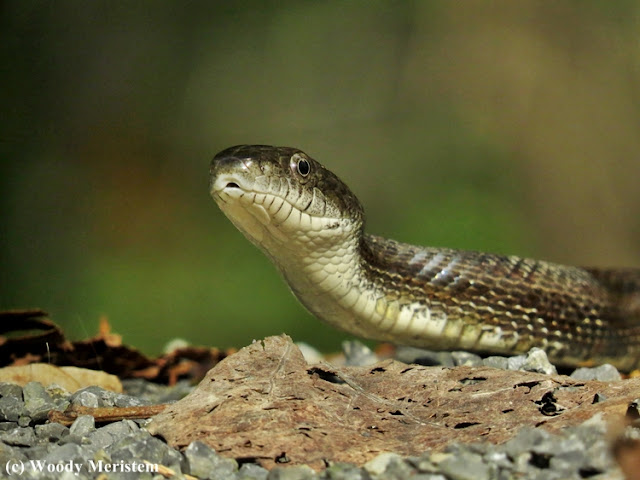 Agricultural practices have changed markedly since the old barns were built, farms have gotten larger or been abandoned, new equipment and agricultural practices have made many of the barns inefficient or obsolete. Insects, decay, wind, fire and gravity have had their way with the barns and the old barns are expensive to maintain. Many, many old barns have succumbed and more are deteriorating or disappearing each year – 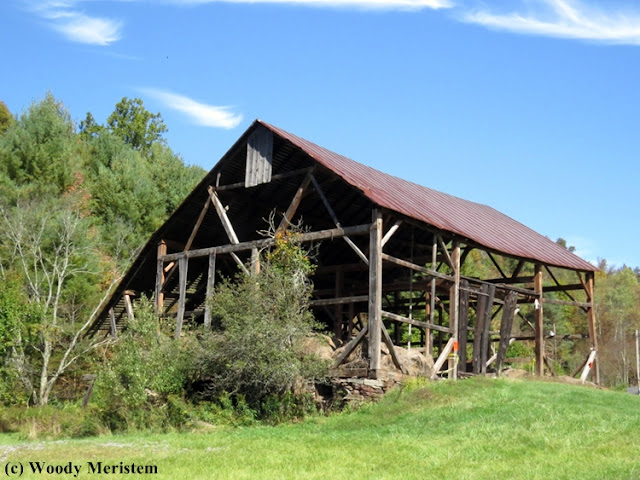 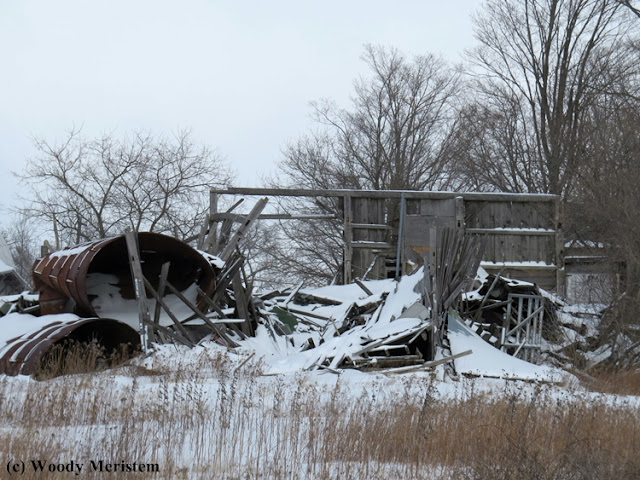 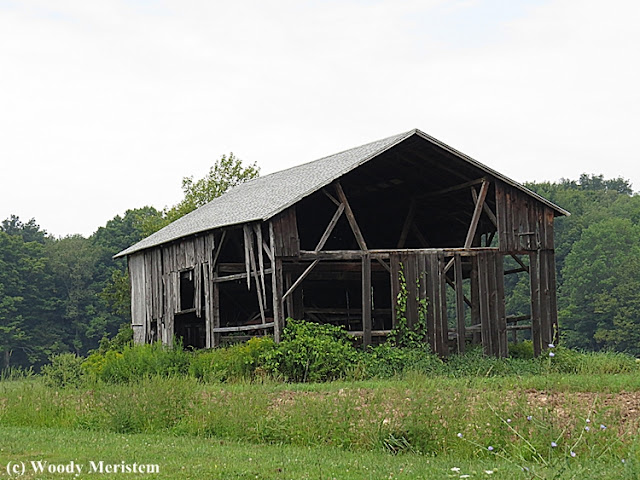 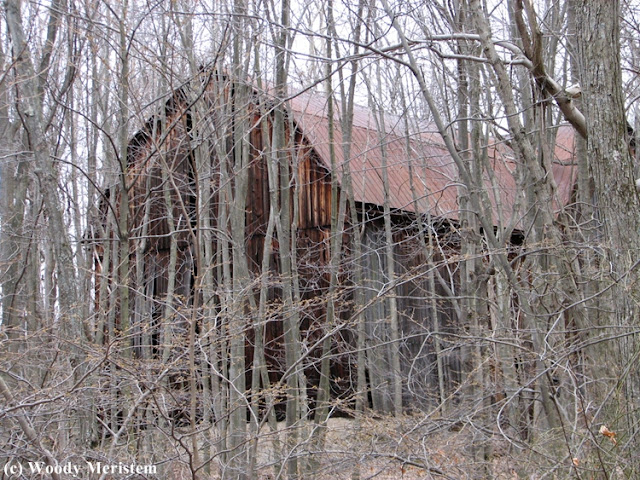 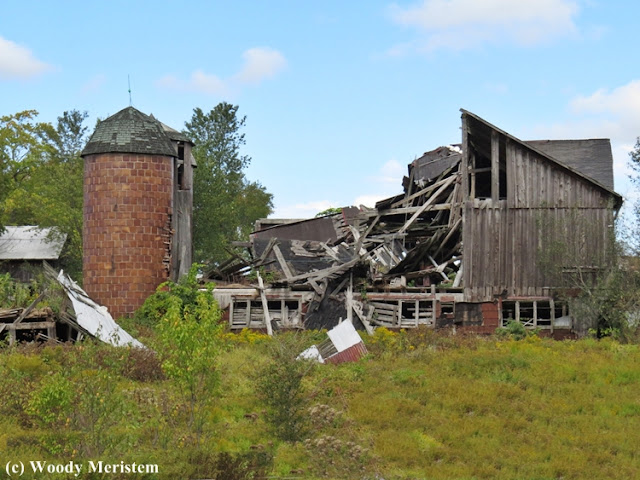 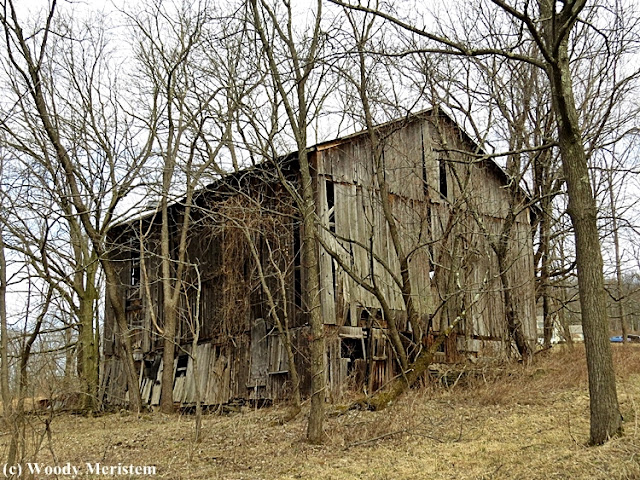 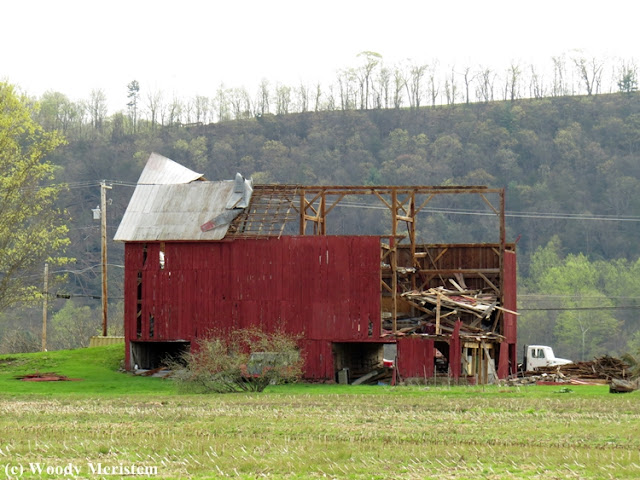 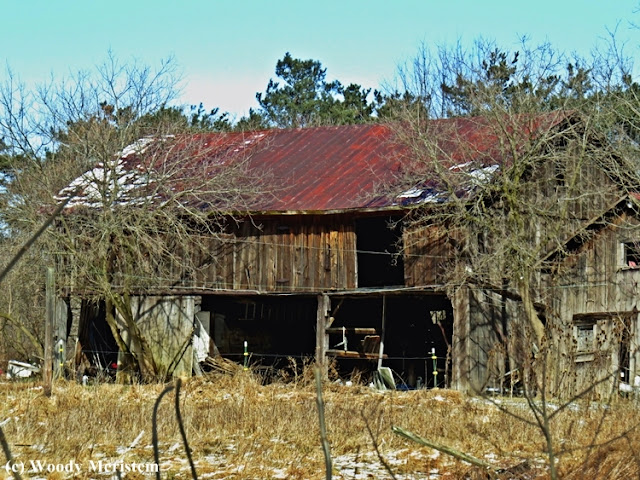 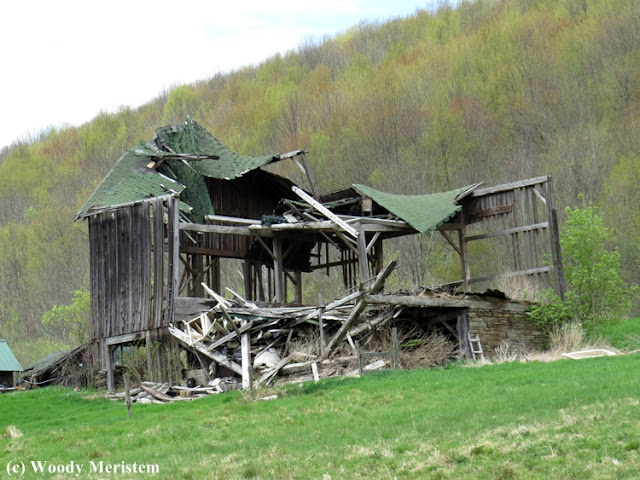 It’s sad to see them go, for many are works of the builders’ art with hand hewn timbers held together by mortise and tenon joints and beautifully laid-up stone foundations. Some owners have the desire, and funds, to preserve their barns for posterity but many more do not.
Posted by Woody Meristem at 5:09 AM 2 comments:

May - LARGE and small


One of my camera traps has been aimed down the trunk of a long-fallen white pine for quite awhile. This has been a good location for a camera trap; last winter the camera took photographs and videos of gray squirrel and bobcat, white-tailed deer and red-tailed hawk and during May it continued to produce well.


When I last checked the camera it had a number of videos, some not worth keeping and some worth keeping and sharing. Here are the better videos from the month of May – raccoon and pileated woodpecker; white-tailed deer and raccoon again; and then, at 1:33 into the video, an insect (my best guess, and that’s all it is, is that the insect is a wood roach) and more deer; and the prize, a short-tailed weasel.

This has been a good location for a camera trap, we’ll see what the future holds.
Posted by Woody Meristem at 7:33 PM 3 comments:

Large bees and small bees and mid-sized bees – bees, bees, bees. Although most of us picture honeybees when the subject of bees arises, there are more than 4,000 species in North America (over 25,000 species worldwide) of which honeybees are but one.


Honeybees aren’t even native to the Americas, they’re an Old World species that was brought to the Americas by early settlers who greatly valued the honey and the beeswax that the species produces. 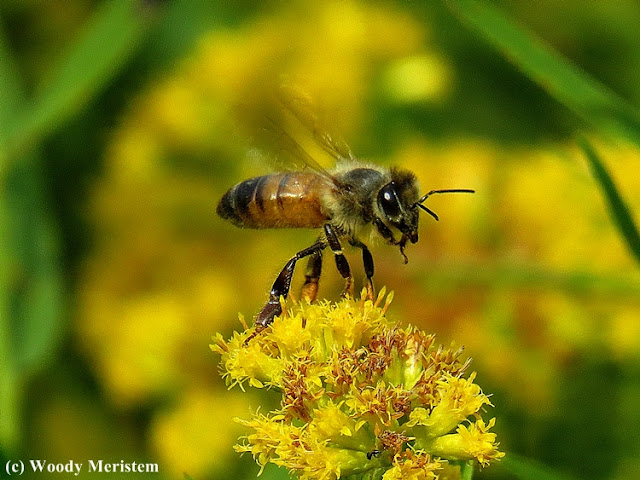 Beside those valuable products honeybees have a much greater value as a pollinator of many, many plants – including a lot of our important food crops. But honeybees aren’t the only bee species that pollinate our food crops, the numerous species of wild bees also pollinate plants that produce food for humans, in most cases wild bees do a better job than honeybees. Wild bees live in small colonies or are solitary and include bumblebees and a host of smaller species.


Bumblebees, those large black and yellow bees that aeronautical engineers supposedly say shouldn’t be capable of flying, are major pollinators because of their large size – 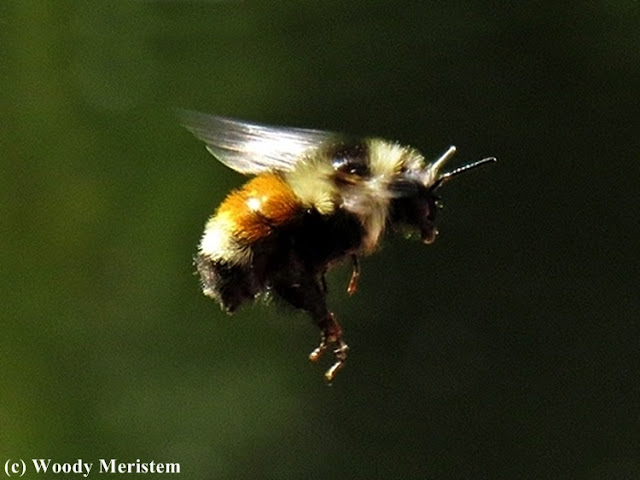 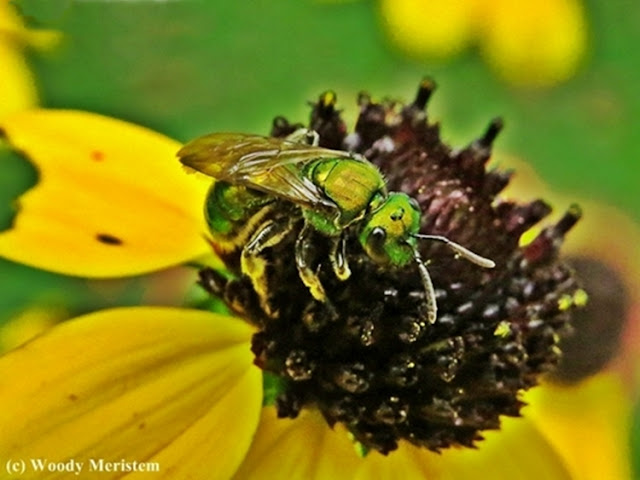 But bees are in trouble worldwide due to pesticides, agricultural monocultures, modifications in land use, and the changing climate. Some formerly abundant and widespread species of bees have virtually vanished throughout their entire range. As bee populations decline so will the production of agricultural crops dependent on pollination by insects.


Do you like apples? Pumpkins? Watermelon? Blueberries? Almonds? Cranberries? Cucumbers? Pickles? Cherries? Thank the bees that pollinated the flowers that produced the fruit. And thank those bees for a lot of other things you eat, since about one-third of the foods we consume are dependent on insects, primarily bees, for pollination. Those crops are reported to be worth $19 billion in the U.S. In addition to food crops bees pollinate about 170,000 species of plants including many forest trees. 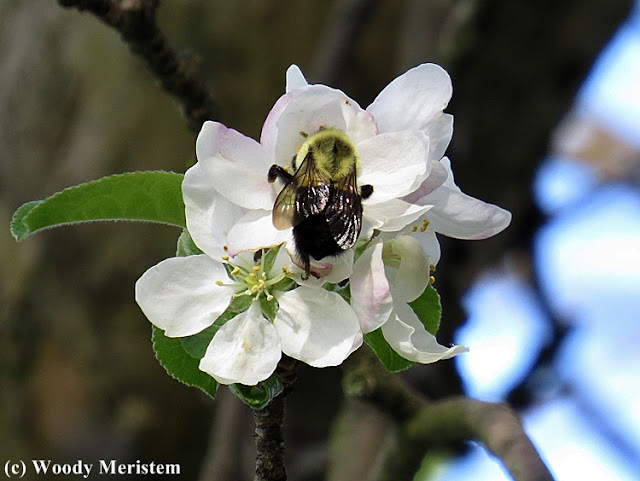 So thank a bee and celebrate World Bee Day on May 20th. You may ask why May 20th is World Bee Day. It’s May 20th because that’s the birthday of Anton Janša (1734-1773) who led the way to modern beekeeping. He wrote books on beekeeping and taught in a beekeeping school in Austria. He encouraged the then new idea of keeping honeybee colonies alive through the winter rather than killing them in late fall by taking all their honey and wax as had been common practice. 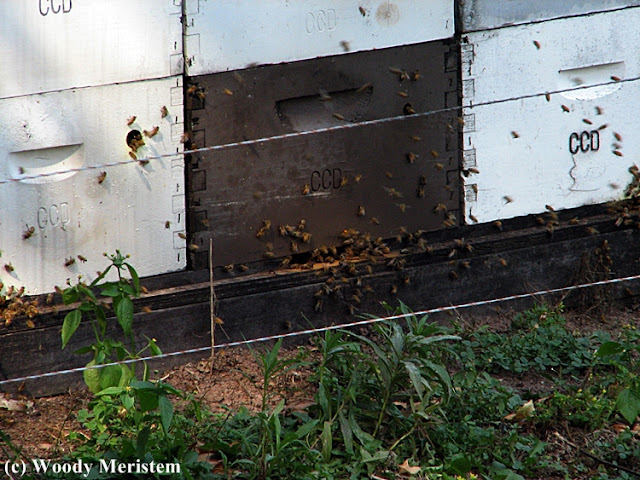 Next time you bite into a crisp apple, enjoy blueberry muffins or spread honey on toast – thank a bee and on May 20th take a moment to think of all the good that bees do.
Posted by Woody Meristem at 7:09 PM 6 comments: