Bleak Place on a Bleak Day

The Merriam Webster dictionary definition of bleak: exposed and barren and often windswept

During the night about four inches of snow fell but changed to rain before dawn, melting some of the snow. And so, I spent part of the morning clearing the driveway and the mound of much heavier compacted snow and slush that the snowplow had deposited where the driveway meets the road. It was still raining lightly, washing away my enthusiasm for walking in forest and field.

We decided to head for our favorite fast food place to pick up lunch and then take a ride through the valley where we lived when we first came to northcentral Pennsylvania 51 years ago.

As we were eating I thought about an area of huge agricultural fields where there was the possibility of seeing open country birds and maybe even a real prize – a snowy owl.

Off we went on this gray day with dense gray clouds overhead. We headed for an area of over 2,500 acres of harvested corn and soybean fields broken up by only a few widely-spaced fencerows, occasional farmsteads, one large stream and a couple of township roads. 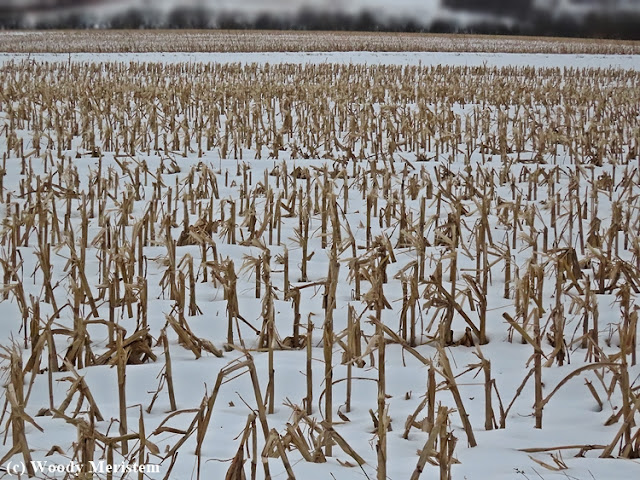 Close to the center of the area, along one of the township roads we saw several nondescript brownish birds – what were they? Letting the car inch slowly forward it became easy to identify them as American pipits, a classic bird of open treeless country that breeds on the arctic tundra and seeks similar habitat in which to spend the winter. Corn and soybean stubble, snow covered ground and a stiff west wind must have seemed like “home” to them. The birds were reluctant to leave the clear edge of the road and offered good opportunities for a few photographs – 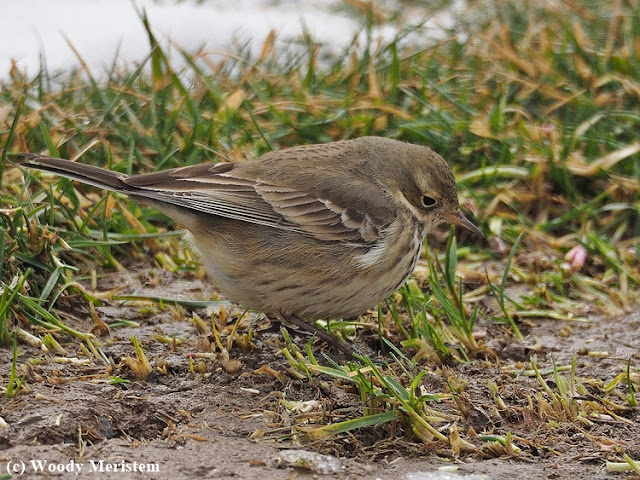 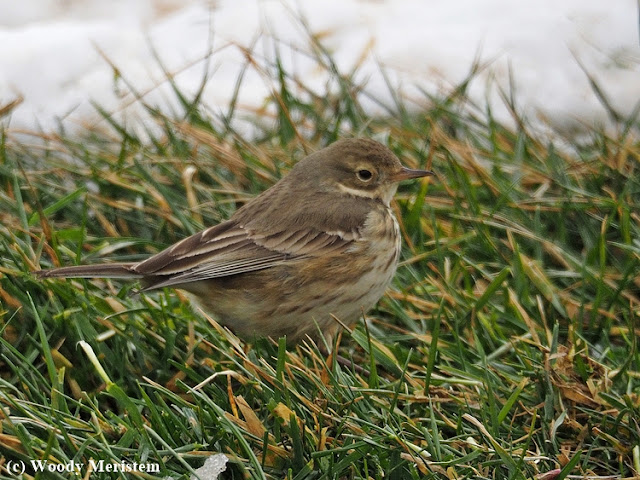 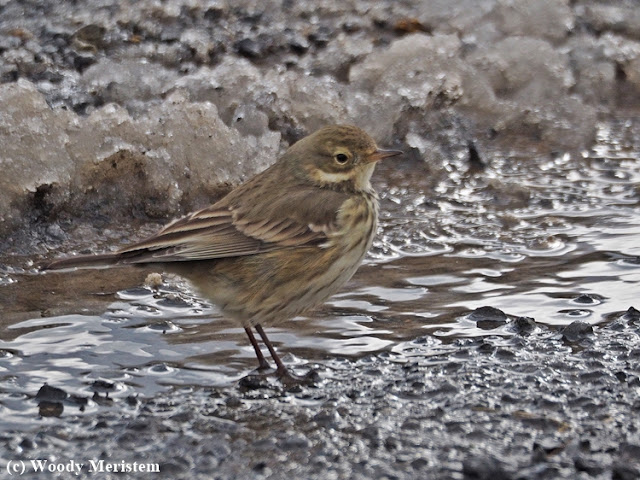 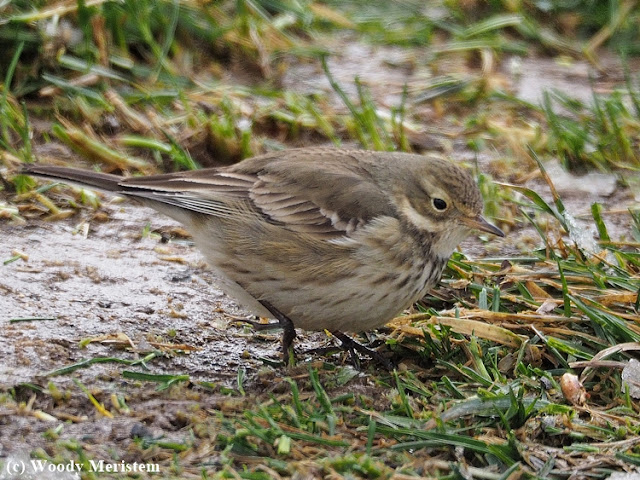 Beyond the pipits a larger flock of birds took to the air at random intervals and the few times a vehicle passed. We eased on past the pipits and toward the larger flock. Those birds, although they tended to circle around and land on the road’s margin as well, would often land out in the fields where there was no bare ground nor much stubble showing. They turned out to be horned larks, another bird at home in open country – 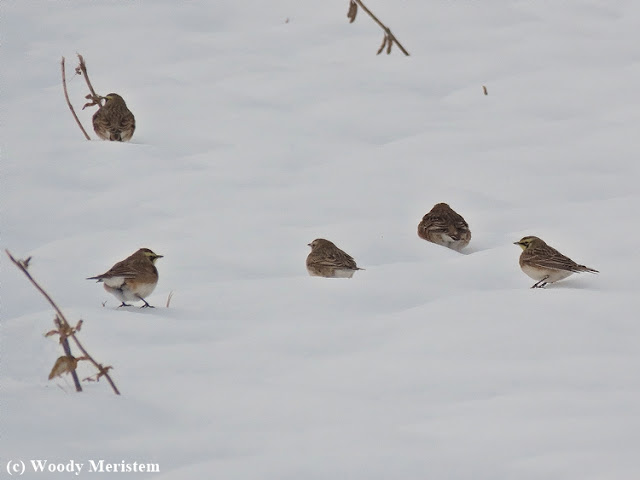 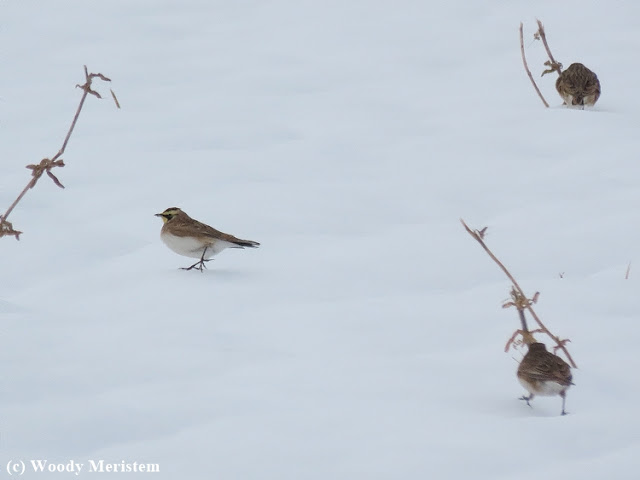 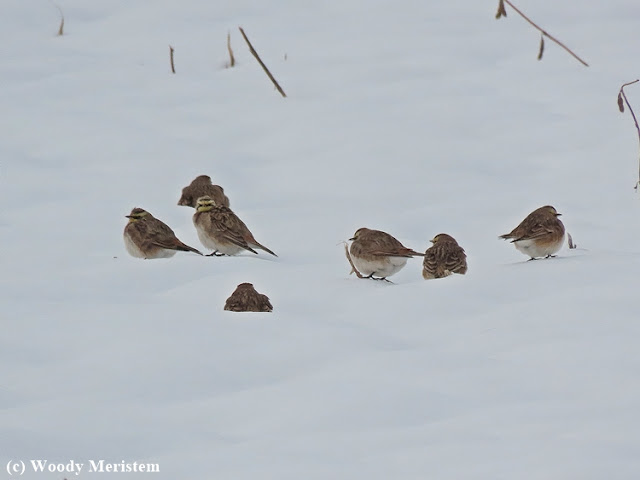 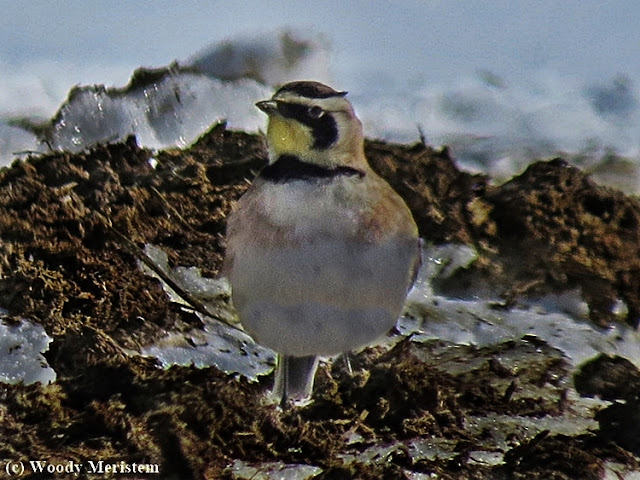 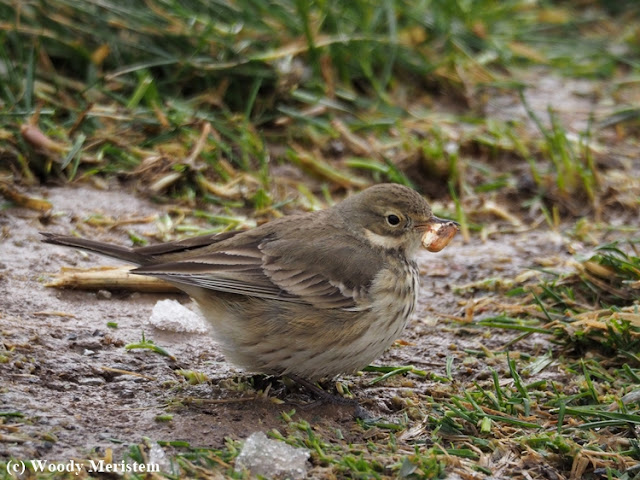 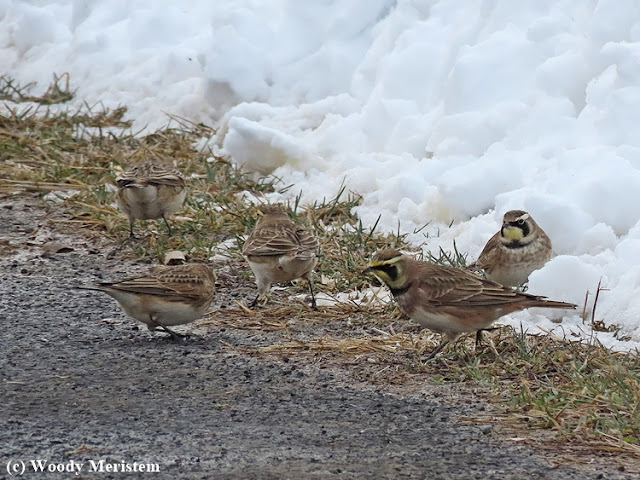 While we were watching the birds H spotted a large light-colored bird winging overhead carried along by a west wind blowing across the bare fields at 35 miles an hour. Not a snowy owl, this was the “gray ghost” a male harrier – called a marsh hawk in my youth. I quickly got out of the car trying for photos of the harrier, too slow and too late – the wind had already carried it beyond view.

It was time to leave this bleak place to the birds that feel at home on bare ground in a cold wind.

Posted by Woody Meristem at 7:45 AM 8 comments:

The Big Woods were covered after an overnight snowfall; it wasn’t much, about two inches, but it was the most we had thus far in this winter. The temperature was in the mid 20s (F) and it was a dandy day for a walk in the woods.

I’d already taken a few photographs when I noticed a large dead white oak with loose bark. Loose bark on a large dead tree is too tempting to pass by, so I stopped and pulled off some of the bark since there’s often something interesting between bark and wood. Those interesting things are usually insects or spiders. Winter is a poor time to find insects, but it can be done.

Most insects spend the winter as eggs, larvae or pupae, a smaller number overwinter as adults. When I pulled the bark from the dead oak what was there but six adult red flat bark beetles – 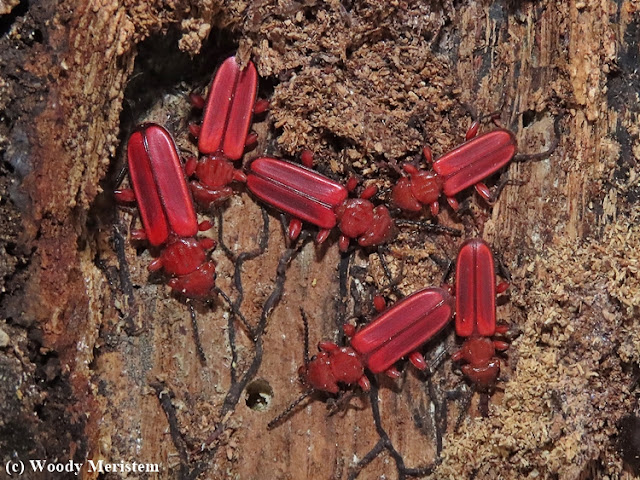 Few insects can tolerate temperatures below -40° Fahrenheit (which just happens to be -40° Celsius) but the red flat bark beetle can tolerate that and lower – down to -70°F in northern Alaska.

This beetle is certainly flat – 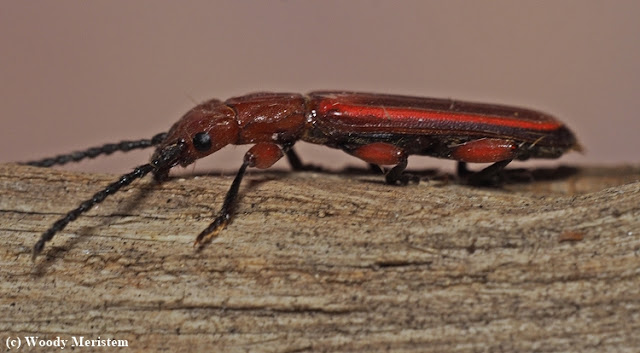 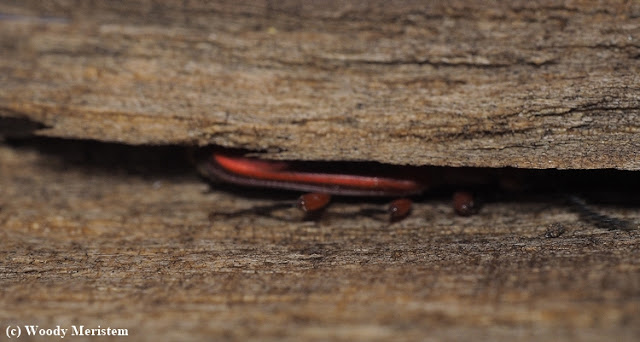 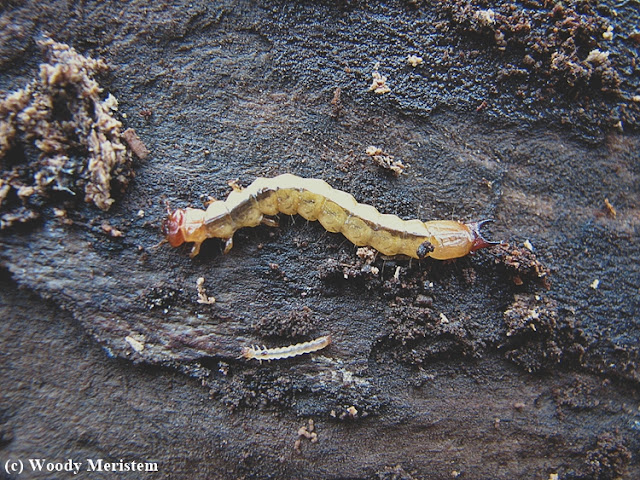 The larvae spend two years under the bark feeding on small insects, spiders and mites and then pupate in the fall. Adults, which emerge late the following summer or fall and also eat small insects, spend the winter beneath the bark. After the adults mate in the spring the females lay their eggs under tree bark.

Both adults and larvae can survive extremely cold temperatures, not just -70°F in the arctic, but reportedly -148°F in experiments to test their tolerance of cold. They’re freeze-proofed by depositing glycerol and certain proteins in their bodily fluids.

Red flat bark beetles are certainly red, they're entirely red except for the black lower legs, antennae and, despite what some websites say, the eyes – 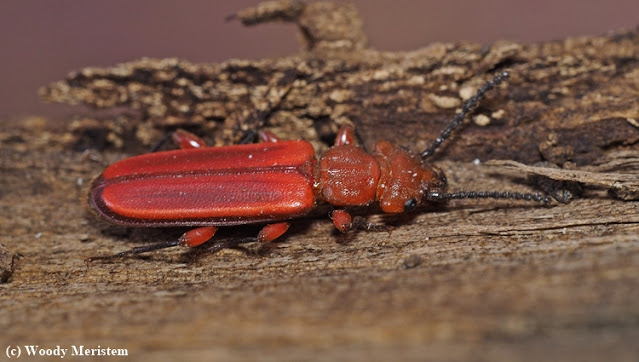 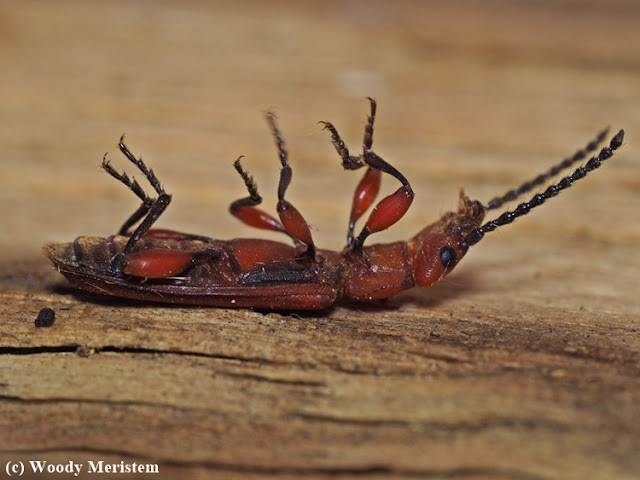 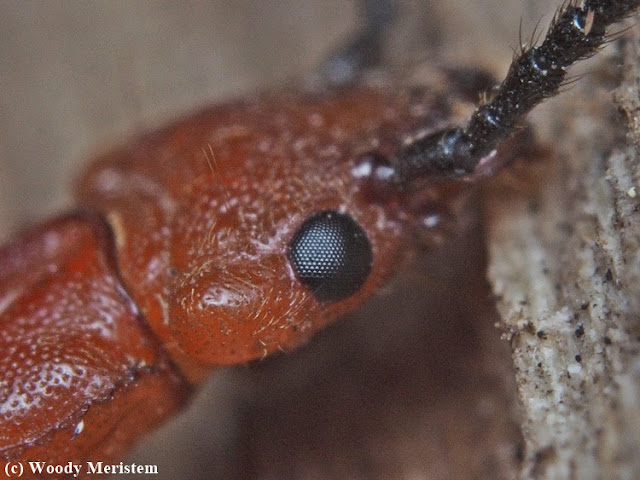 Red flat bark beetles aren’t uncommon but are not frequently seen unless you’re looking for them. But if you burn firewood you may find one in the house, brought in with the firewood. 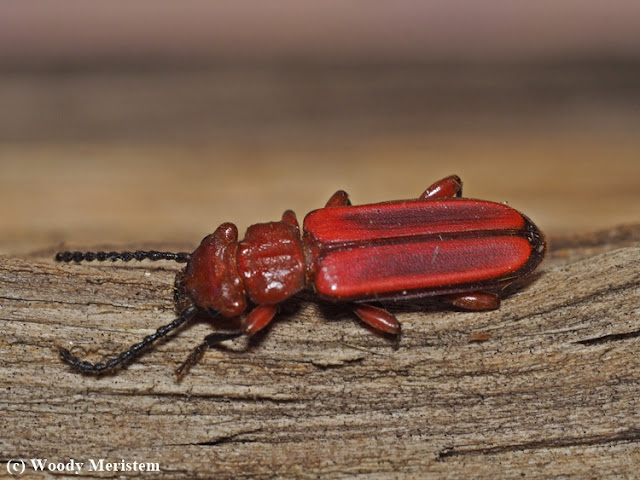 Posted by Woody Meristem at 9:43 AM 8 comments:

Twelve Months on the Rim

The camera trap on the rim wasn’t as busy in 2021 as it has been in the past, getting a smaller variety of wildlife and fewer videos of those that did appear in front of the camera. Bobcats, which have provided a number of very good videos in the past, made only two appearances in 2021.

One bright spot was the number of white-tail bucks that passed in front of the camera as they sought does during the rut in late-October and November. 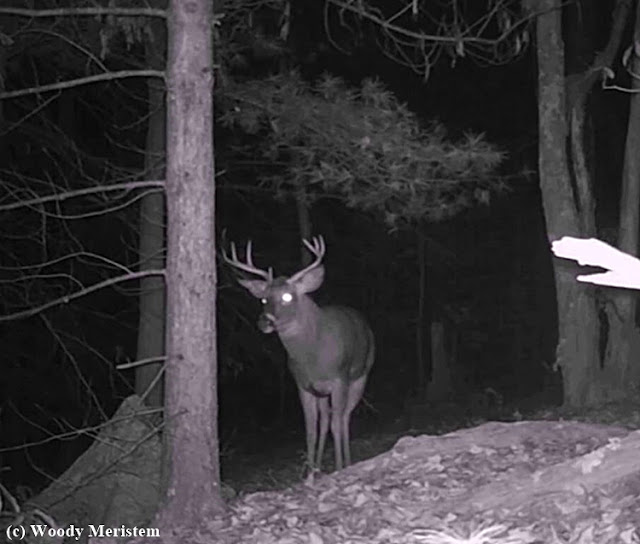 Some camera trap locations are quiet for a year or so and then activity picks up, other places never see much wildlife activity. This has been a good spot in other years and the camera trap will remain in place through 2022.
Posted by Woody Meristem at 5:57 AM 4 comments:

Faces in the Forest

Out in the forests and fencerows there are faces watching us. Some of the faces are those of the mammals, birds, amphibians, insects and other living creatures – but some are not. Those non-living faces are the inanimate faces to be found on trees and rocks and some plants.

The inanimate faces we see are but a small percentage of those that are out there since few of us actually search for them. Every one of the faces I’ve seen has been found by chance, just something that caught my eye. Some require a bit of imagination or just the right light striking the spot at just the right angle, but others seem really obvious.

Here’s a sample of the faces I’ve found in the forest. The first few do require some imagination to discern a face, they get easier as you scroll through the photographs – 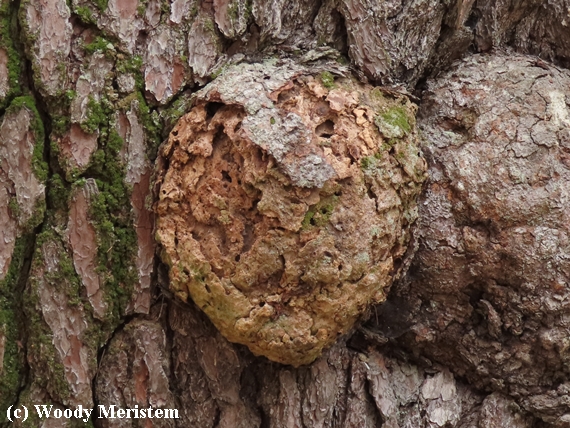 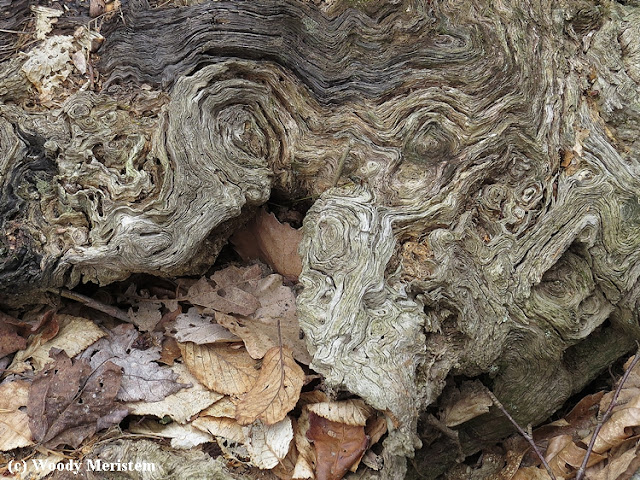 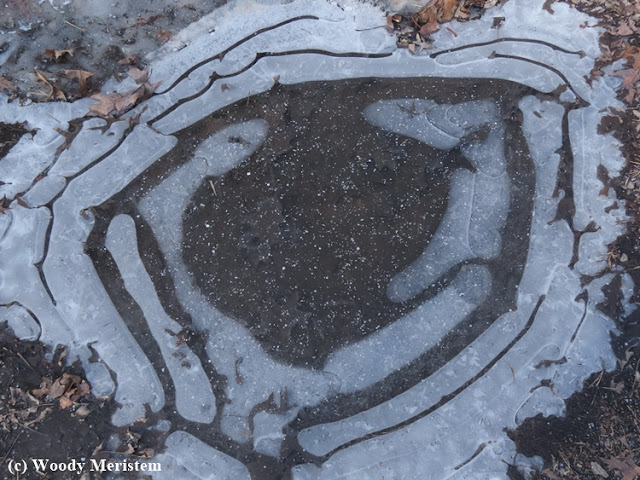 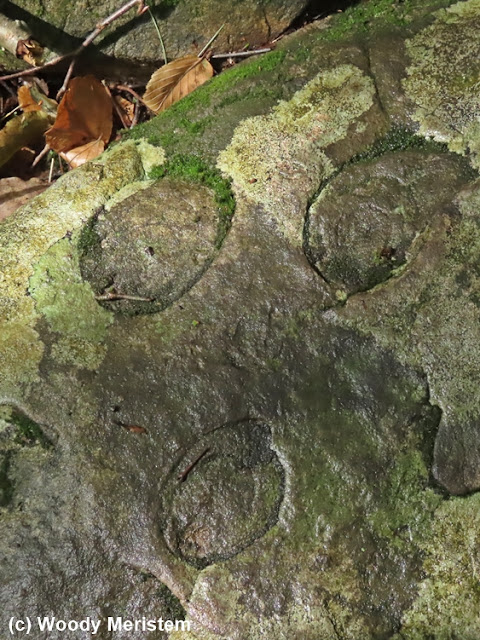 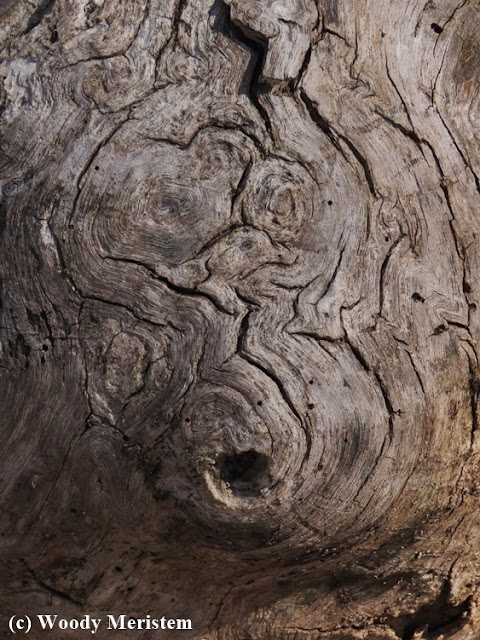 There are animal faces as well, the profile of a black bear – 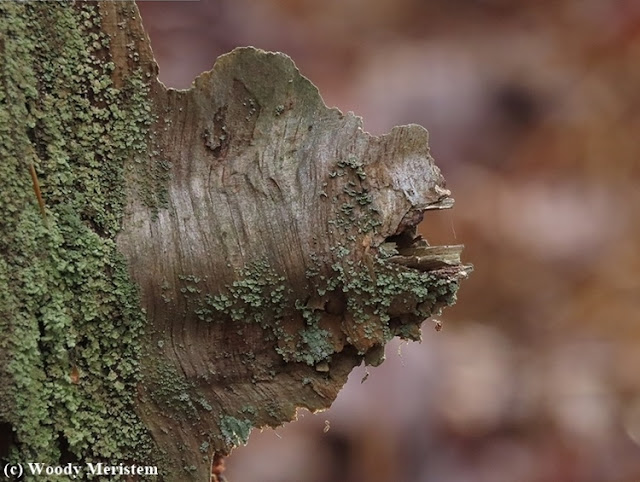 And the three-horned bull of the woods – 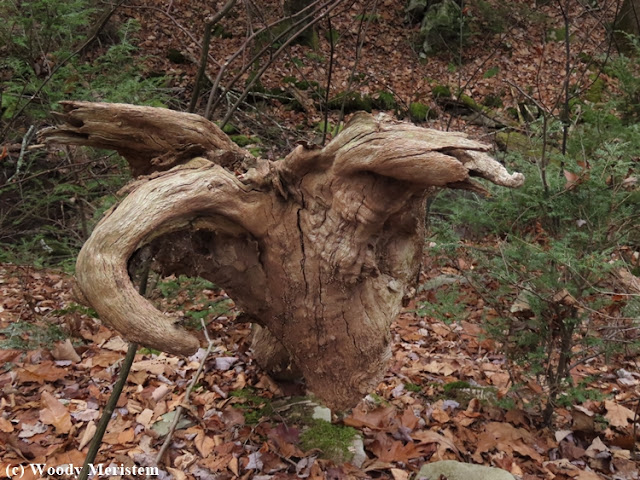 But most are human faces – 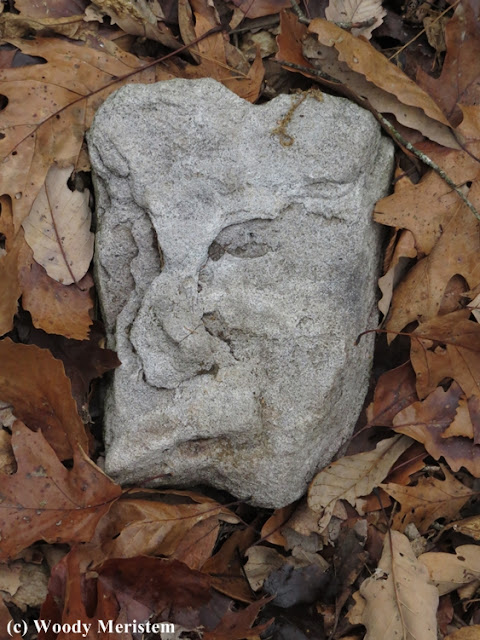 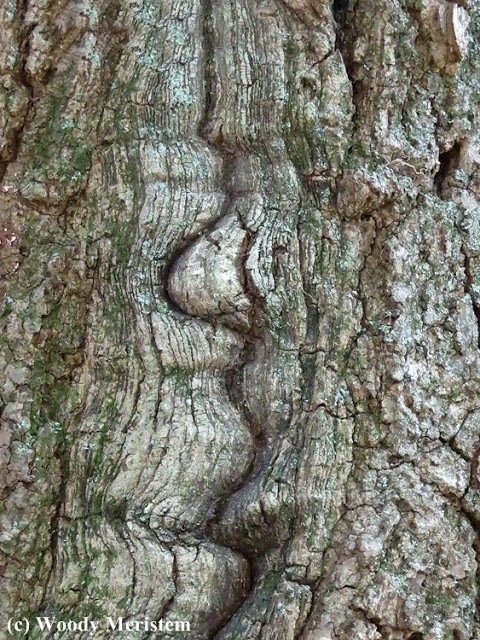 Just in case you don’t see what I’ve seen, here’s my interpretation of the images – 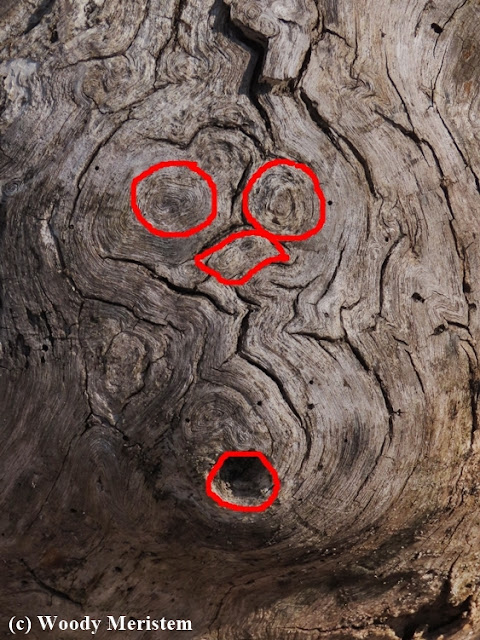 And no, these are not fossilized faces of the mythical sasquatch nor objects created by a super-natural something - they're just random shapes playing with my mind. "Don't you have anything better to do?" says my wife.