Inukshuk are stone monuments, often resembling human figures, constructed by Arctic peoples for various reasons – to show the way, to mark food caches, as memorials. Supposedly the traditional meaning of the word inukshuk was “someone was here”. They served many purposes and have come to symbolize the arctic and its native people.

It seemed to happen suddenly, early this year stone towers began to appear in woodlands. The towers, most not more than three feet tall but some much larger, are composed of precariously balanced stones gathered from nearby. Some of the stones are fairly small and so would have been easily lifted; others are much larger but still could have been lifted by one person. 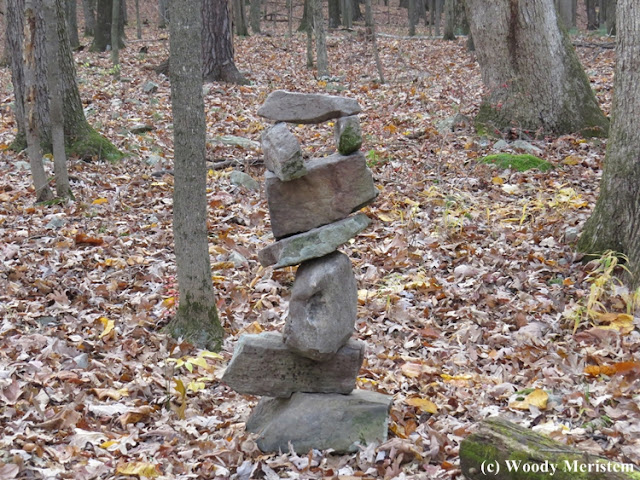 The appearance of the towers raises several questions: Who? What? Why? Northcentral Pennsylvania is far from the arctic and its peoples.


Who remains a mystery to everyone I’ve asked as nobody has come across someone constructing one or spoken to a person who has ‘fessed up to being a builder.

What is also a mystery. Have they been built as inukshuk to show what? Or as a religious symbol – a mini-steeple, pointed toward the builder’s idea of “heaven”, or as graffiti to show that the builder was there, or … ?

Some would certainly have taken quite a while to build, and patience, and maybe even assistance to hold some stones in position as others were added to the tower. 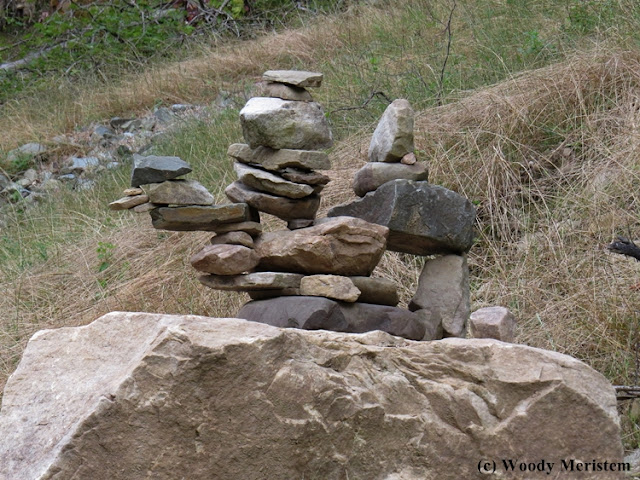 A few seem to have some religious significance, obviously pointing skyward – 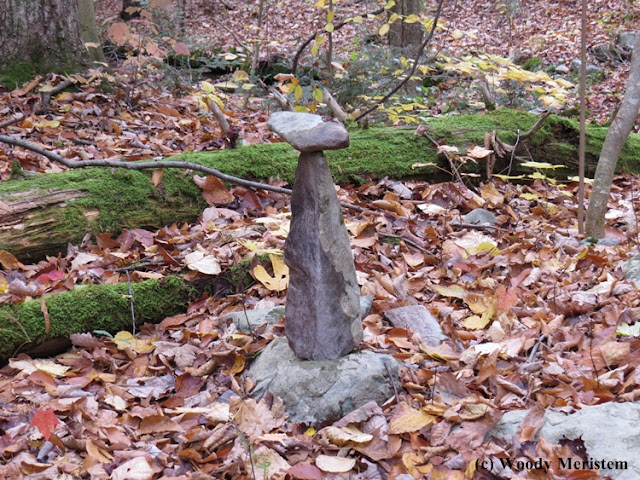 Or could be interpreted as a human figure or a cross – 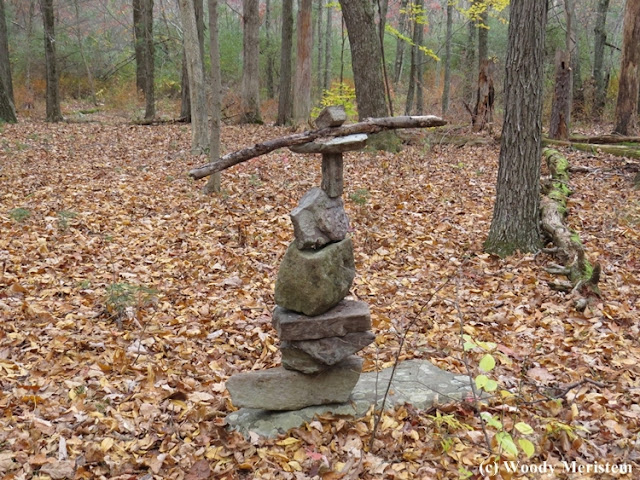 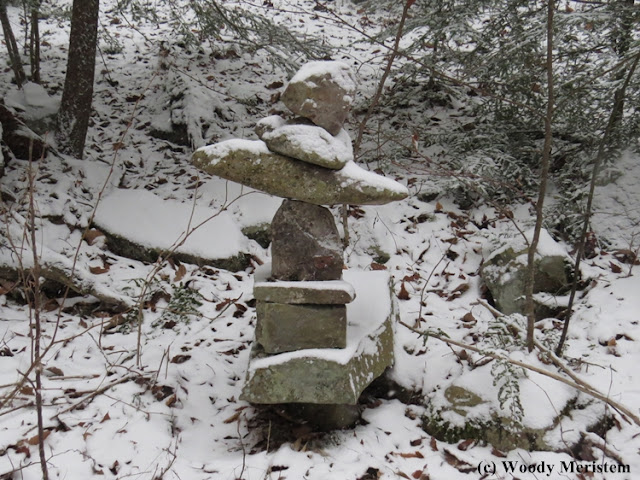 But many just seem resemble an inukshuk to say “someone was here”  a form of graffiti made from natural materials rather than being spray-painted on bridge abutments, buildings or railroad cars – a way to say not, “someone was here” but instead to  “I” was here. 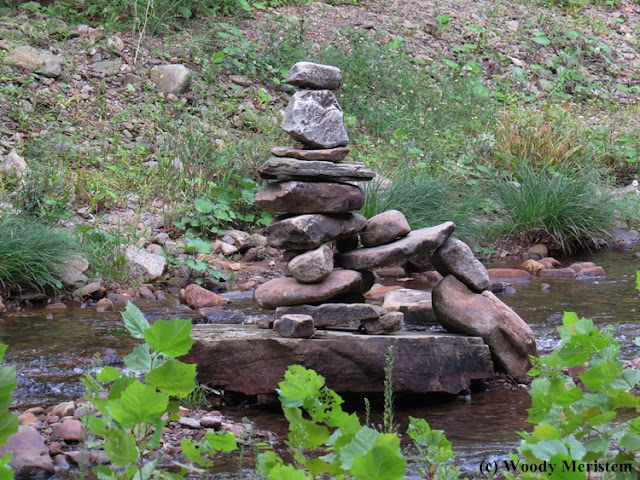 Whether they were done as inukshuk, religious symbols or graffiti, they’re not in the artic serving a purpose. Fortunately, frost action, animals or whatever will bring them to the ground.

Posted by Woody Meristem at 4:46 AM 5 comments:


Cats have nine lives is an old myth that never dies, and there are a number of other cat myths that never die. Here’s one that deals with a cat much larger than a house cat –

Recently, an acquaintance pulled out his smart phone to show me a photograph he’d gotten on Facebook of a large mountain lion that had reportedly been killed near Altoona, Pennsylvania. Wondering why friends who would/should have known more about this hadn't contacted me, it was time for some research.

There on the Pennsylvania news site, PennLive, was the same photo from a January 2014 article with a reference to a July 2008 article.


Interestingly, the same photograph appeared in February 2008 when the mountain lion was supposedly killed in Calhoun County, West Virginia.

This must have been a very well traveled mountain lion with at least nine lives since an account in Texas Hunt Works, with the same photograph, had it reportedly hit by a vehicle and killed in Stonewall County, Texas.
Other reports (some with the same photograph) had the same mountain lion killed in Alabama, Illinois, Iowa, Kansas, Kentucky, both North and South Carolina, Virginia, Wisconsin, and several Canadian provinces. Wow! That’s more than nine lives.

A bit more research revealed what was apparently the true story in the Williams News from Williams, Arizona It seems that the mountain lion was struck, but not killed by a vehicle and then euthanized by an Arizona Department of Public Safety officer. There was even another photograph of the same animal and the same man, this time the man was in uniform –


Mountain lion myths abound, including one that Pennsylvania’s wildlife agency traded (with the state of your choice) wild turkeys for mountain lions (or coyotes – it depends on the teller of the tale). A few weeks ago this tale was presented to me as a true account –

Supposedly, a Pennsylvania state trooper was checking large trucks when he thought one manifest looked suspicious and thought he heard something moving around in the back. The trooper finally convinced the reluctant driver to open the back and found the truck loaded with mountain lions that were to be released in the state. I was too busy trying not to snicker to ask whether the big cats were in cages or loose in the truck.

So, if someone shows you a photo of a large dead mountain lion it might just be this cat of many lives –

Captive mountain lions that are kept as “pets” get big and feisty, causing them be released; young males in western states dispersing to find a territory or mate can wander long distances, as did one born in South Dakota that turned up in Connecticut after being caught by camera traps during its journey. So, it may be possible, if very unlikely, that a mountain lion occasionally roams Penns Woods - but it wasn't the one "killed near Altoona".
Posted by Woody Meristem at 1:53 PM 2 comments:


Last May I set a camera trap at a brush pile above the house and posted a selection of photographs from the first month here.
Now, more than six months later and before we have much snow on the ground, it’s time to post more of the photos from the brush pile –


Several of the pictures were a bit humorous as squirrels and white-footed mice went through gyrations on the brush pile.


The camera trap has five more months to watch the brush pile; through the depths of winter and the greening of spring. More to come:

Posted by Woody Meristem at 4:51 AM 3 comments:

At 11°F it was the coolest morning of the young winter. And no, 11° isn’t really cold in spite of what the TV weather people may say. To people who spend their working lives indoors 11° may be cold, but people who work outdoors in northern winters – the loggers, linemen, farmers and others – work when it’s much colder.

In any event, with a brilliant blue sky and a gentle breeze this was a great morning for a walk in the Big Woods. Around the house the dusting of snow that recently fell was already gone, but in the Big Woods on a gentle north-facing slope there was still a little snow on the ground. 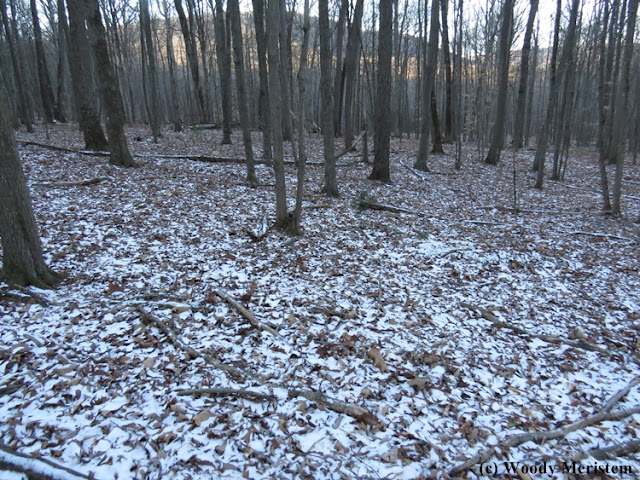 A bit of water seeping from a tiny spring combined with the temperature produced frost crystals, resembling feathers, on objects near the water. On twigs – 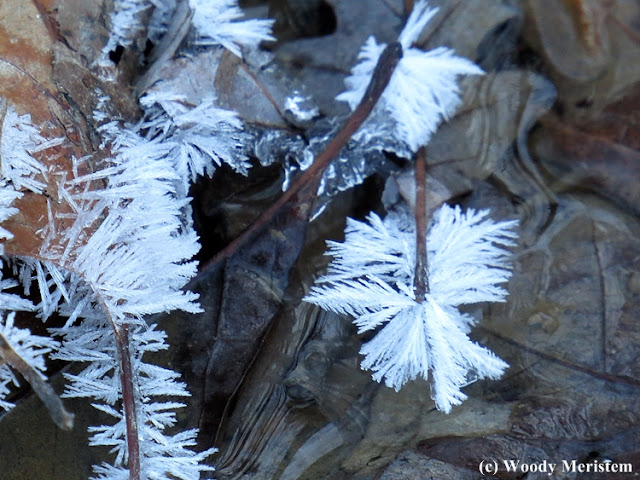 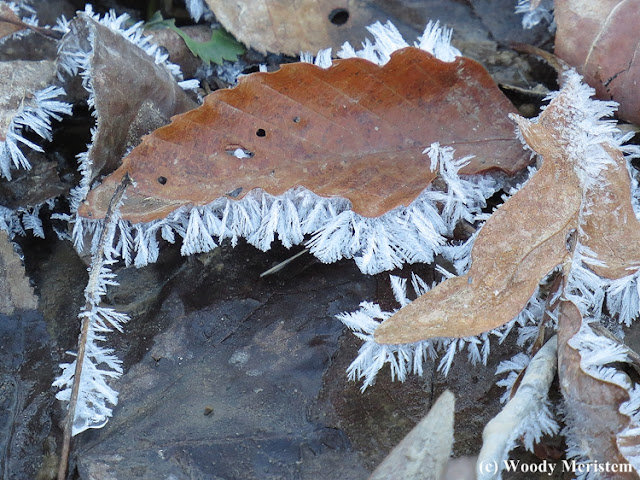 And bits of wood – 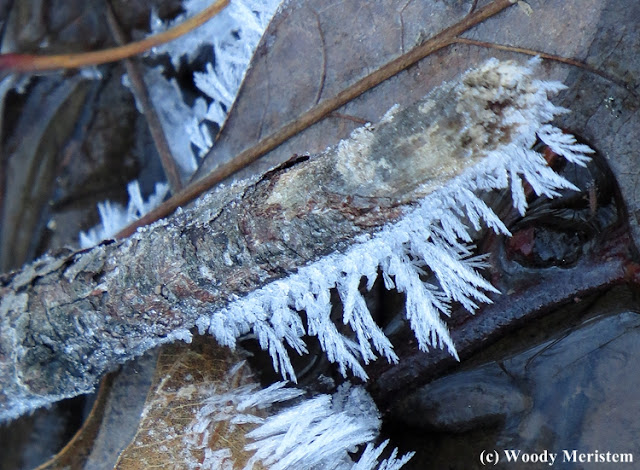 The inside of a hollow rotten stump bore large numbers of those frost feathers near the top, but lower in the stump it was apparently too warm for the crystals to form – 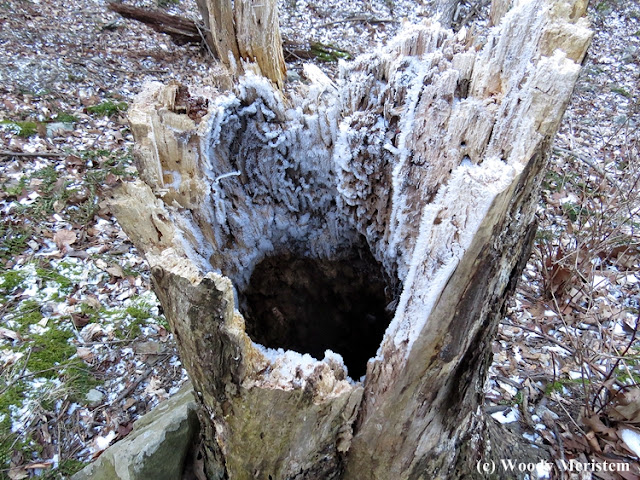 What an abundance of frost feathers were in the stump – 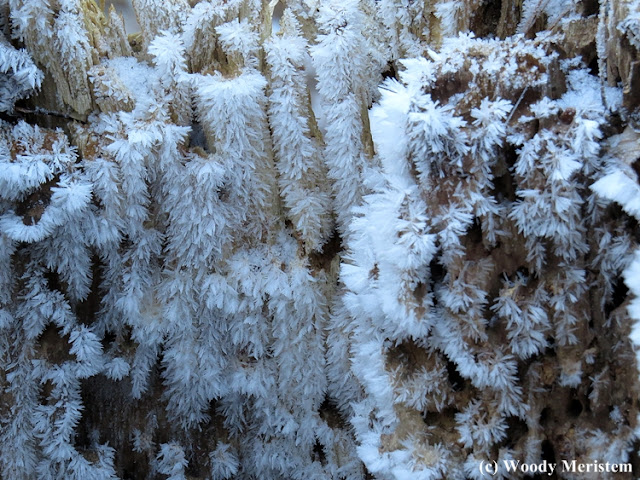 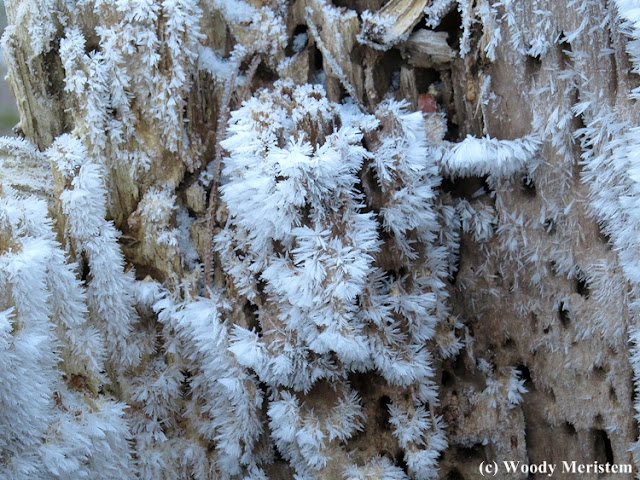 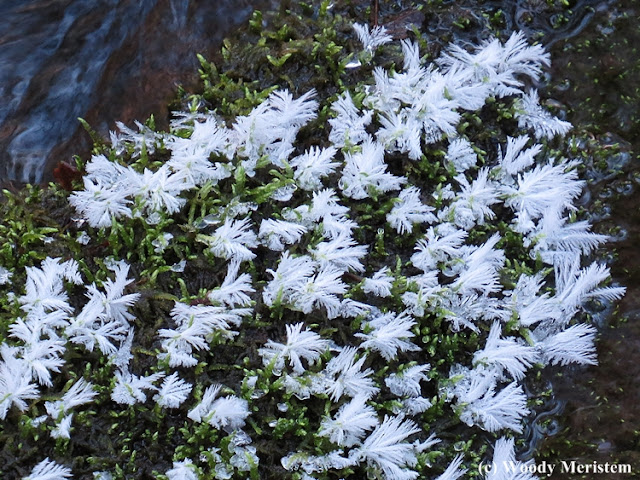 11° may not be really cold, but it’s cool enough to cause frost feathers to form and add an ephemeral beauty to the natural world; a beauty that will vanish as the temperature rises.
Posted by Woody Meristem at 4:42 AM 8 comments: