Spring on the Rim

The camera on the rim has been very productive of videos of a host of wildlife species. For those of you who haven’t seen earlier posts of videos from the rim, here’s a brief description of the location: The rim is the edge of the Allegheny Plateau in northcentral Pennsylvania; it’s an ecotone, the boundary between different habitats. Here the ecotone is between a forest dominated by chestnut oak with an understory of mountain laurel on gently rolling terrain and a forest dominated by black birch, red maple and red oak on a steep slope with very little understory.

Videos from the winter on the rim were posted in March, here are videos from spring on the rim: white-footed mouse, hairy woodpecker, raccoons, white-tailed deer, black bear and eastern coyote –

Summer has now arrived and with it the heat and humidity that usually causes wildlife to seek shade and moisture. Oak forests with abundant mountain laurel are not places where it’s easy to keep cool – but steep hillsides with birch-maple forests are usually cooler. We’ll see if wildlife activity on the rim changes in summer or if some species disappear for a while.
Posted by Woody Meristem at 7:26 PM 5 comments:

The small clearing with the hole in the ground (see this post) that has attracted a wide variety of wildlife  had more visitors late in the spring. Late spring in this case is the month of May from the first until the 31st of the month. While many people use astronomical seasons, where the solstices and equinoxes signal the beginnings and endings, the meteorological seasons are more attuned to the workings of the natural world. Hence, March, April and May are spring in forest and field.


This clearing has been among my favorite camera trapping locations for years and has usually provided interesting photos and videos. If you’re a regular visitor to In Forest and Field you’ve seen this clearing before, sometimes from different angles.


The camera captured hundreds of videos during the merry month of May – left out of this post are several hundred, including all of the videos of gray squirrels, cottontail rabbits and raccoons and most of those of white-tailed deer –


The month produced a large number of videos of eastern coyotes. It seems that a pair has been using the area as an activity center. The male is the first black eastern coyote that I’ve captured on camera. Although there’s been little research on color variations in eastern coyotes, it’s been estimated that about 2% are black in color.


Black bears, being very intelligent and inquisitive, seldom just walk past a camera trap and this was no exception as the female and her two cubs each examined the camera and it was moved once again.
Posted by Woody Meristem at 5:10 PM 3 comments:

Yes indeed, there’s always something interesting to see in the great outdoors.


On a mostly cloudy morning I went for a walk in a nearby woodland. It was a slow, lazy walk that afforded an opportunity to look around. This was a woodland inhabited by deer, bear, wild turkey, bobcat, fisher, eastern coyote, and a host of songbirds – hopefully there would be one or more of them available for an intrepid photographer.


Other than a few tree-top songbirds, only one of those photogenic creatures was ever in view. But there are always interesting things to see: First was an abundance of wild geraniums growing along the old road on which I walked. Wild geranium flowers are often an interesting reddish-blue, not really purple, that most digital cameras have difficulty capturing. 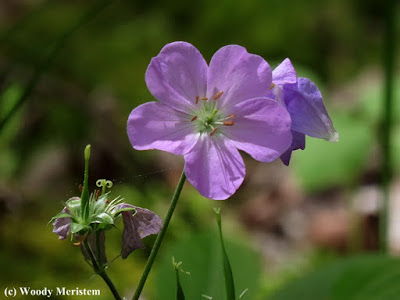 Further along was a small adventitious sprout on the trunk of a tulip-poplar. All broadleaved trees have, beneath their bark, adventitious buds that usually remain dormant but often become active when a tree is under stress. I thought the two little leaves on this sprout were photogenic – 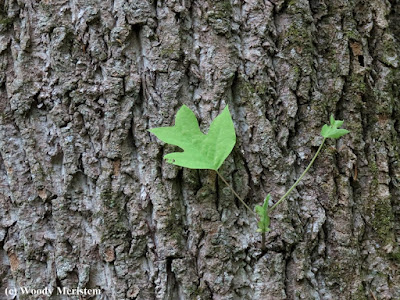 In a sunny spot a number of small butterflies were flying and repeatedly landing on a sun-heated log to warm their flight muscles. They were all of the same species, one of a large group of generally drab, difficult to identify, butterflies called skippers – 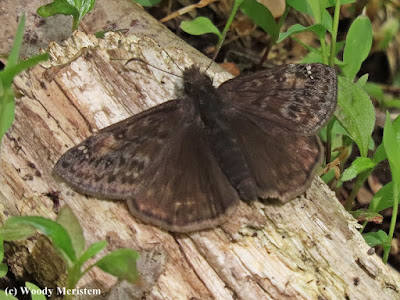 This woodland has several groves of hickory trees whose nuts attract squirrels, black bears and wild turkeys in fall, but this was late spring, not fall, so none of those were present. But, the leaves of a small shagbark hickory were inhabited by the larvae of a gall midge (a type of fly), each larva produced a small round gall on the leaves – 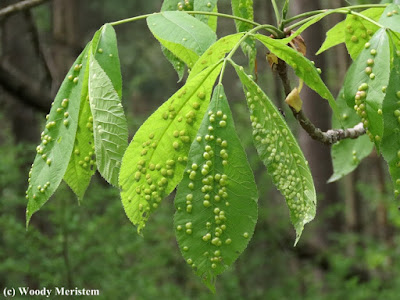 The old road on which I was walking also passes through a stand of eastern hemlock, many of which have died in the last few years. One of the fallen hemlocks was being broken down by the fungus usually called varnish conk for its shiny appearance. What would the world be like without the decomposers? 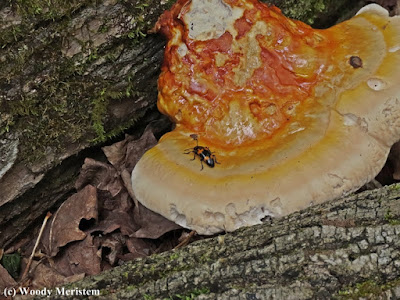 On that conk was a beetle, one of a small group known as pleasing fungus beetles, all of which are brightly colored in orange and black and feed on a variety of fungi, especially mushrooms. 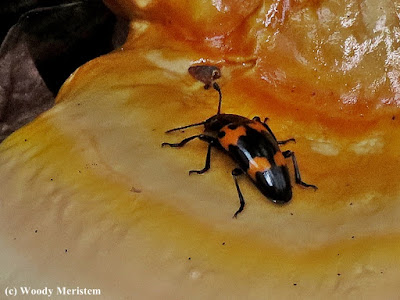 There are several small grassy openings in this woodland. As I walked past one of those, about 200 feet away a white-tail doe was feeding. She was remarkably calm, seeming to pay no attention to a human from which she would have fled mere weeks ago. Her apparent calm may well have been a bluff – this was birthing time for white tailed deer and the does like to hide their new-born fawns in grassy fields. It was better to enjoy the sight of the doe and not search for the fawn – 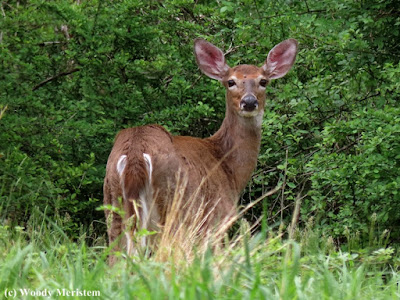 Beneath a clump of small beech trees was a group of squawroot in bloom. Squawroot is a flowering plant that lacks chlorophyll and so cannot produce its own sugars, instead it’s a parasite on oak and beech trees. Black bears frequently eat squawroot flowers, so the plant is sometimes called bear corn or bear cones. Most of the plant is underground, the flowering stalks appear above ground in late spring when the plant blooms – 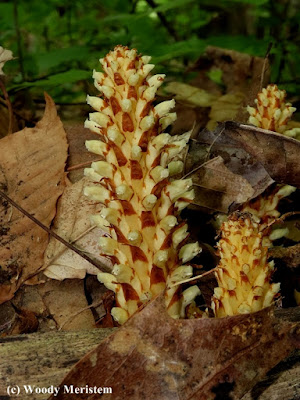 Something dangling from a branch over the old road caught my eye. It was out of reach but my alpenstock easily caught the silken thread which held it in mid-air and brought it within reach. What was it? Lo and behold, it was a pair of jumping spiders – 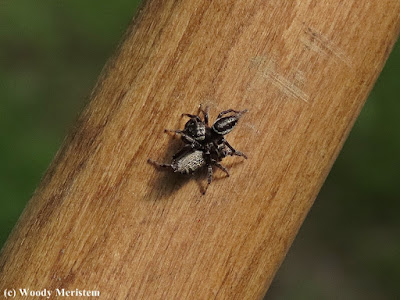 One of the many small blue butterflies that frequent spring woodlands is the eastern tailed blue. And tailed it is, not like the gaudy tiger swallowtail that also frequents spring woodlands, but with smaller discrete tails on its smaller, less conspicuous self – 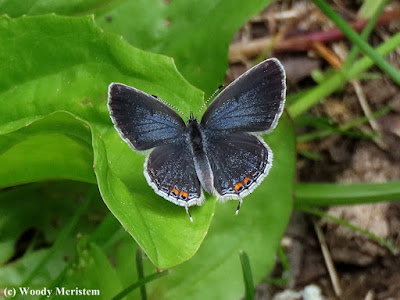 And thus endith a morning walk in the woods – see, there’s always something interesting.
Posted by Woody Meristem at 3:27 PM 8 comments: