For some time there has been a discussion among those who run camera traps about how wildlife, especially white-tailed deer, react to the flash of trail cameras. In low light conditions – especially at night – a flash is necessary to obtain a photo. Some cameras use a “white flash” with which we are all familiar; others use an infra-red flash created by light emitting diodes that glow red for about a second; others use what is called a “black flash” that is actually infra-red but which cannot be seen by the human eye.

Some folks think that the glow of an infra-red flash is less startling to wildlife than a conventional white flash that seems to light up everything nearby. Others are of the opinion that a white flash resembles lightning with which most wildlife is familiar – and that wildlife doesn’t react to the very brief (typically 1/1000 second) white flash.
While a case can be made for each side of this discussion, any of us who use both white flash and infra-red flash camera traps should be able to provide some empirical evidence of how wildlife reacts to a flash.
Herewith some examples. These two series of photos were both completed in less than one minute from the deer’s first appearance to when it disappeared from the camera’s view. A Sony P32 in a homebrewed camera trap using a white flash took the first five; the second four were taken by a Moultrie M80 camera that uses a visible infra-red flash. Although these were two different deer, neither of which may have reacted in the same way as other deer would – or as how these deer would each react on a different day or under different conditions – the difference in their responses is striking. 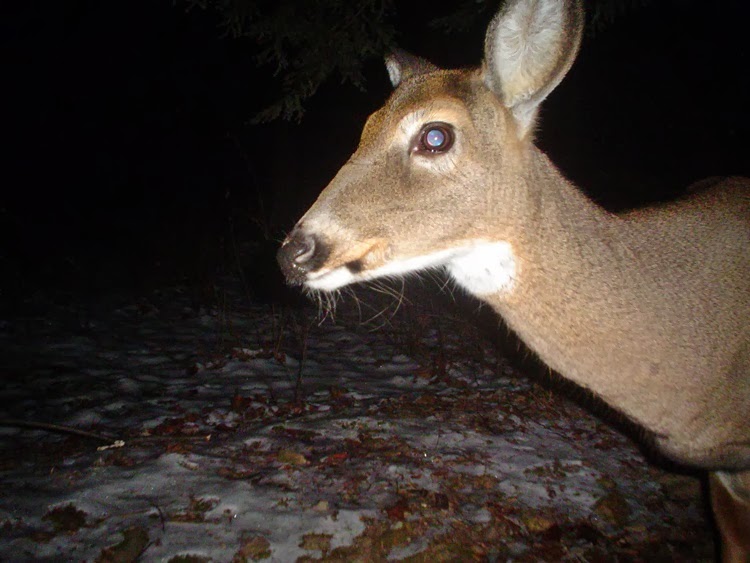 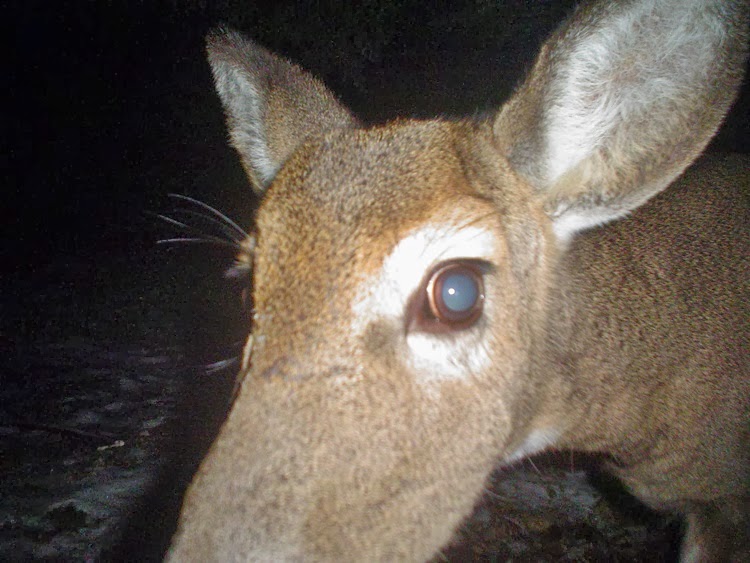 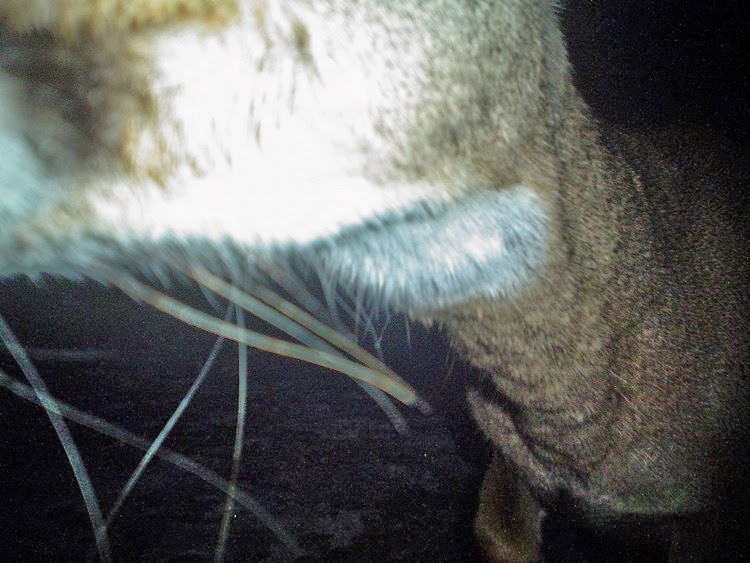 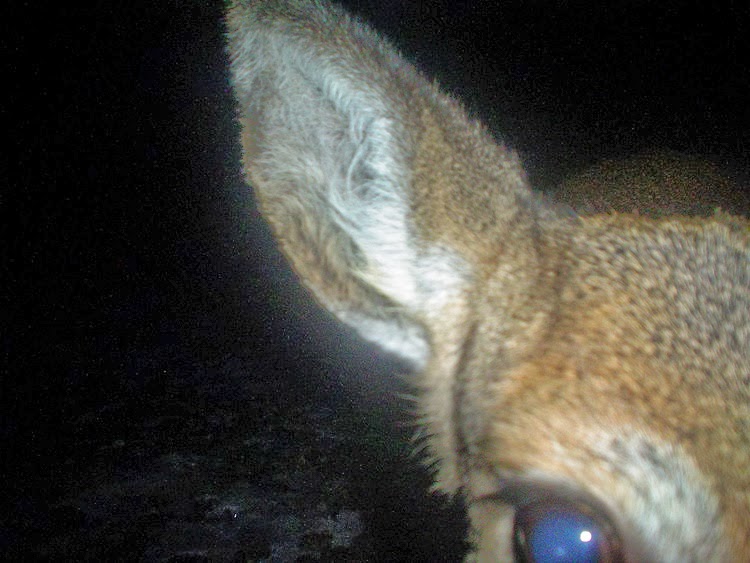 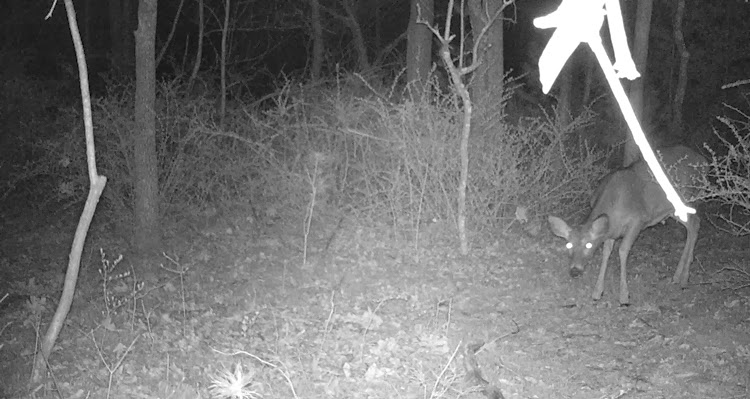 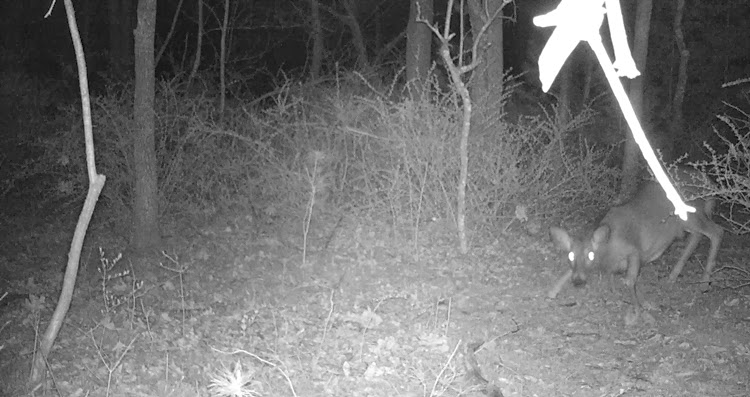 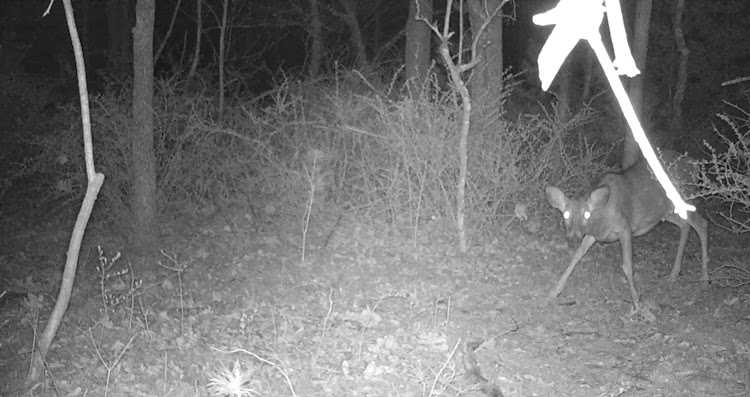 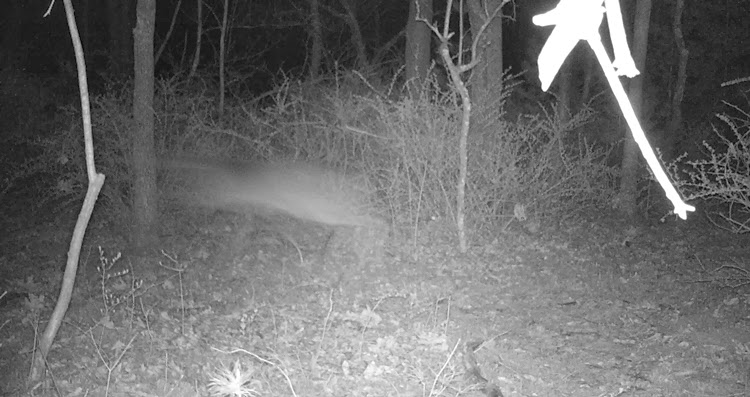 It’s rather obvious that the white flash resulted in a reaction that could best be called curiosity. On the other hand, the infra-red flash clearly startled the deer to the point where it fled. Over the time I’ve used camera traps to capture photos of wildlife, the cameras have gotten numerous series like this. Interestingly, while black bear, deer and raccoons often display curiosity and investigate the cameras; bobcats, coyotes, both species of fox, fishers, opossums, porcupines and rabbits seem to ignore the flash; white-tailed deer are the only species that appear to have been startled and then only by a visible infra-red flash.
So, for me the argument is settled and I now only use infra-red flash camera traps in areas where a white flash might reveal a camera’s location to other people.
Posted by Woody Meristem at 8:35 AM No comments:

Bald Eagles Along the River

Last week on a beautiful crystal clear morning I walked along the river where an adult bald eagle was occasionally to be seen perched in a riverside tree. That morning the usual tree was empty, but a bit further on an eagle flew up from below the bank, went a short way along the shore and landed in a tree, then flew on out of sight. 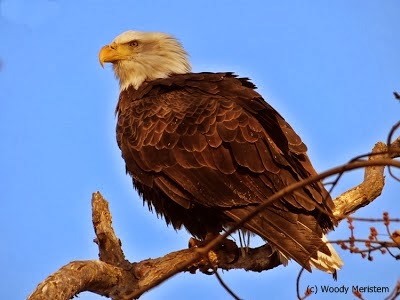 Curiosity aroused, I looked over the bank and there on the ice laid an injured or sick double-crested cormorant. The cormorant could raise its head but otherwise didn’t or couldn’t move. So, it seemed that the eagle intended to make a meal of the cormorant. Went back the next morning as the season’s first real snow was beginning to fall; there was no trace of the cormorant – it had provided a meal for the eagle or some other predator. 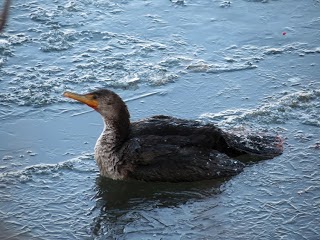 This brought to mind the first bald eagle I’d ever seen, 48 years ago on the tidal section of a tributary to Chesapeake Bay. That eagle took a duck from a flock that was feeding in a shallow backwater.
Proceeding along the river, I saw the eagle again, this time perched in the same tree as its mate. The male bird (upper right in this photo) was much more wary than the female and flew not long after it saw me. The female, on the other hand seemed to be much more tolerant of the human walking nearby and let me pass on by without flying. 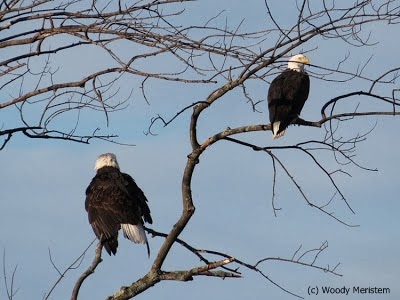 Twenty-five years ago there were but three bald eagle nests in Pennsylvania, all in the northwestern corner of the state. It was a rare treat to see one of the birds here – and it was always a migrant or a bird wintering along one of the larger streams. How things have changed!
Thanks to the ban on DDT and reintroduction efforts by the Pennsylvania Game Commission there were reports of over 250 bald eagle nests in the state this year. It’s still a treat to see a bald eagle, but now it’s one we can enjoy with some regularity. 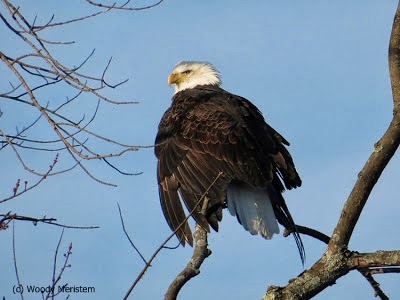 Posted by Woody Meristem at 6:52 PM No comments:

We Must All Hang together

“We must all hang together, or assuredly we shall all hang separately.” So said Pennsylvania’s Benjamin Franklin at the signing of the Declaration of Independence on July 4, 1776. Ben was right, and his sentiment was true not only in 1776 – it’s still true in so many, many ways.
Hunting seasons are gradually drawing to a close and the time for Christmas bird counts begins.
I know some hunters who think all birders are naïve, effete environmentalists – and some birders who think all hunters are evil, bloodthirsty killers. But I also have friends that are hunters who watch songbirds while they hunt bigger game. Other friends are birders who hunt and who realize that hunters are the only realistic means of keeping white-tailed deer from destroying the forest understory needed by wood thrush, ovenbirds and a host of other species.
All too often the hook and bullet crowd and the chickadee chasers are busy criticizing each other and fighting against even the most reasonable proposal from the other folks. Meanwhile, as these two groups, who should be natural allies, are arguing the field (and the forest too) is left to the developers and the exploiters.
If we look back, many of the pillars of conservation in this country were both birders and hunters wrapped in one:
·  George Grinnell, in the 1870s, was part of many expeditions exploring the American west; he hunted in the northern Rocky Mountains, was one of the founders of the Boone and Crockett Club, and organized the first Audubon Society.
·  George Shiras 3d was an avid hunter and fisherman who pioneered the use of camera traps in the late 1800s and, as a U.S. Congressman, introduced legislation to protect migratory birds.
·  Teddy Roosevelt, the president who brought us National Forests and National Wildlife Refuges, made an extensive list of the bird species he’d seen, and hunted in the American west and Africa.
·  Aldo Leopold, the acknowledged father of wildlife management and in 1933 authored the first text on the subject, was also a bird bander who wrote about his hunting trips and often wrote about songbirds.
What Happened?? When and why the two groups, that were once allies, parted ways doesn’t really matter anymore and is best left to historians. What does matter now is that if they can’t work together more and more of the habitat that wildlife needs will be developed into residential subdivisions or big box stores, or will be impacted by mineral extraction. For assuredly there are those who, for their own purposes, benefit by keeping the feud going.
If the people, hunters and non-hunters, who care about wildlife don’t hang together they will “hang” separately as habitat and wildlife disappear.

Posted by Woody Meristem at 4:59 PM No comments:

Deer at the Lake

It was 56° yesterday – too darned warm for early December. Went to the Preserve, a property consisting of about 4,000 acres containing a lake of more than 150 acres. Of the acreage, over three-quarters is open to public hunting – the remainder, mainly around the lake, is open to the public but closed to hunting. This being the first week of firearms deer season in Pennsylvania, taking a camera for a walk around the lake seemed a good way to spend the day.
A bald eagle was in a tree across the lake, but by the time I got close enough to the tree for a photo the eagle had moved on, not to be seen again. For part of the way around the lake a trail hugs the shore, affording views up and down the shore as well as across the lake.
And there, walking along the shore were two white-tail bucks. The deer seemed to know they were safe, even though there were old tracks of other humans on the lakeside trail. These two bucks could live their entire lives within the area closed to hunting and only be subject to predation by automobiles on the nearby road and an occasional coyote. 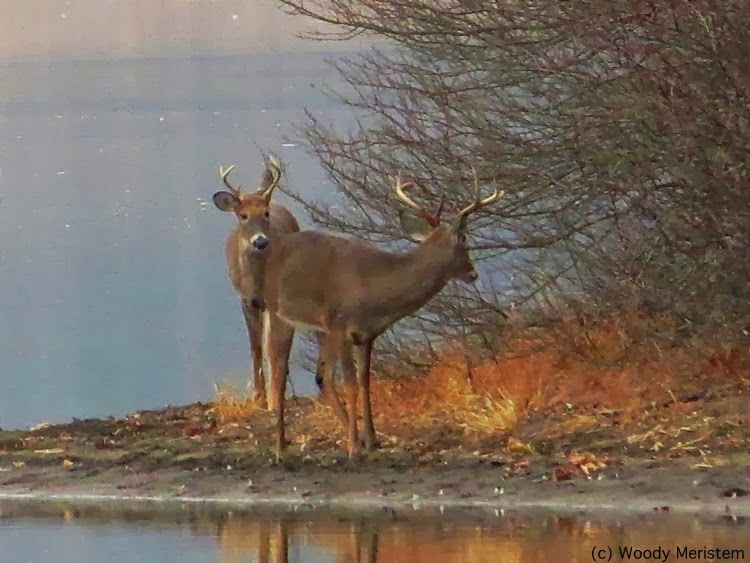 Couldn’t help thinking about the frustrated deer hunters elsewhere on the property and how tempting it would be to sneak into the area closed to hunting for a chance to bag one of these bucks. But then, that’s what sportsmanship is about. As Aldo Leopold said, “ethical behavior is doing the right thing when no one else is watching.”
Posted by Woody Meristem at 10:32 AM No comments:

Our Neighbor the Gray Fox

Over 40 years ago we built our house in woodland that had developed in a long-abandoned pasture. Choosing to live in that location we also chose to share the space that was already home to a large variety of wildlife. From white-footed mice to star-nosed moles; turkeys and pileated woodpeckers; white-tailed deer and black bears, we’ve seen a lot of species – some only a few times, others frequently. One of our wild neighbors that I’ve never seen here and my wife has seen but once is a gray fox. 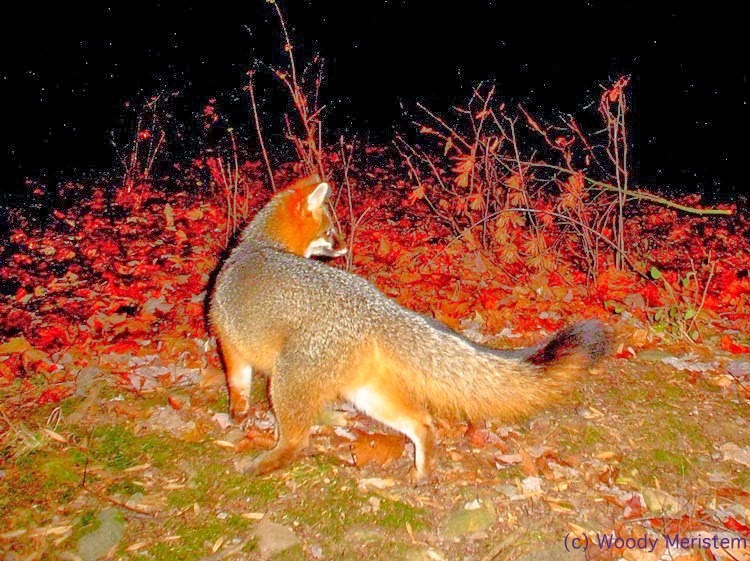 Because humans are diurnal critters and most other mammals are primarily nocturnal, I’ve kept at least one camera trap out behind the house for as long as I’ve used them. Although I took the camera traps out of the Big Woods well before hunting seasons began, the ones behind the house were left in place.
While the gray fox keeps out of sight, it doesn’t escape the camera traps. Yesterday, a check of the cards from two cameras out back revealed 412 photos including 193 of one or more gray fox – so the gray fox certainly isn’t camera shy. It’s not even shy of the camera’s flash, with sequences of photos taken over a short time as rapidly as the camera’s flash capacitor could recharge. 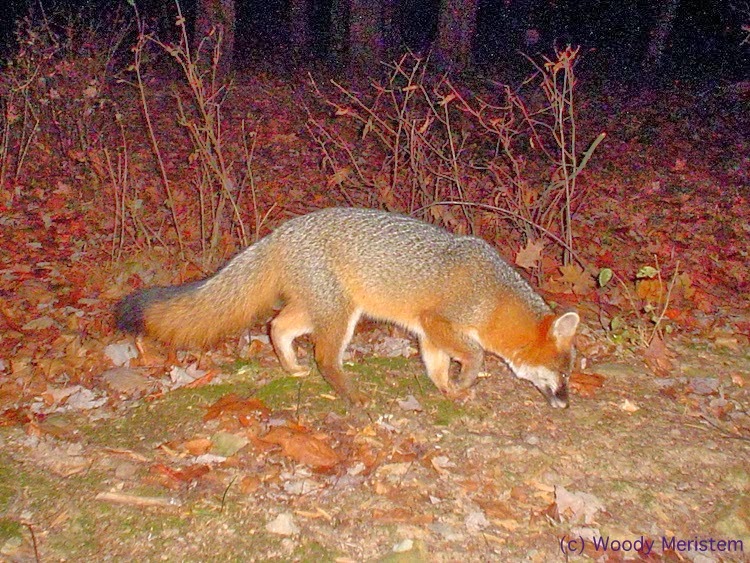 The gray fox is an interesting animal: the only canid that regularly climbs trees; it may form lifelong pairs; it eats about anything, from nuts and berries to mice, birds and rabbits; and prefers extensive woodland. They spend the day in a den, usually among or beneath rocks, in a hollow log or perhaps in an old woodchuck burrow. On the ridge above the house are extensive rocky areas where the fox probably spends the day, but there are a few scattered fallen hollow trees that would make suitable den sites. In any case, in all my wanderings I’ve never found a den.
We’re glad to have the gray fox for a neighbor; it keeps to itself, doesn’t make much noise, and doesn’t seem to mind having its picture taken. 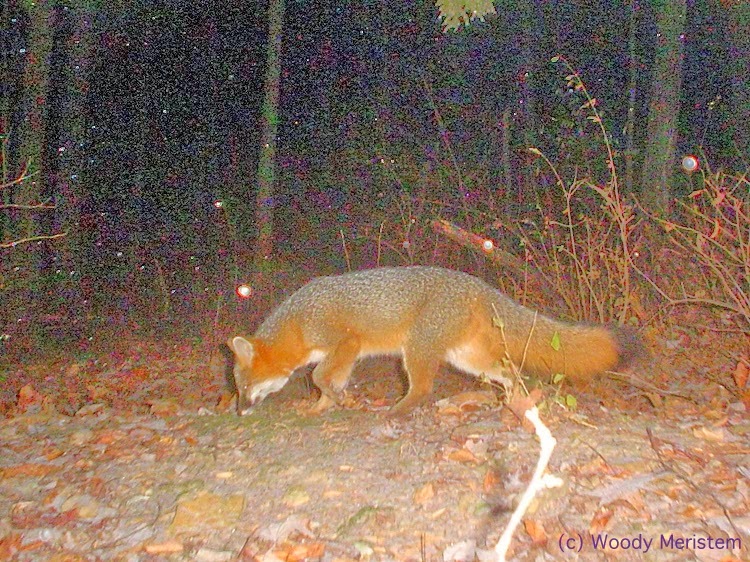 Posted by Woody Meristem at 6:57 PM No comments: