This week the first of the spring wildflowers appeared in woodlands that are on moist fertile soils. These are the ephemeral spring wildflowers that briefly appear and bloom before the leaves of the hardwood trees emerge. The plants are not especially tolerant of shade, so they must grow and produce enough sugars and starches to last the year before the forest floor is shaded. They are some of the Northeast’s most beloved wildflowers and familiar sights, even if their names are not, to any observant person who spends time in the woods during the early spring. 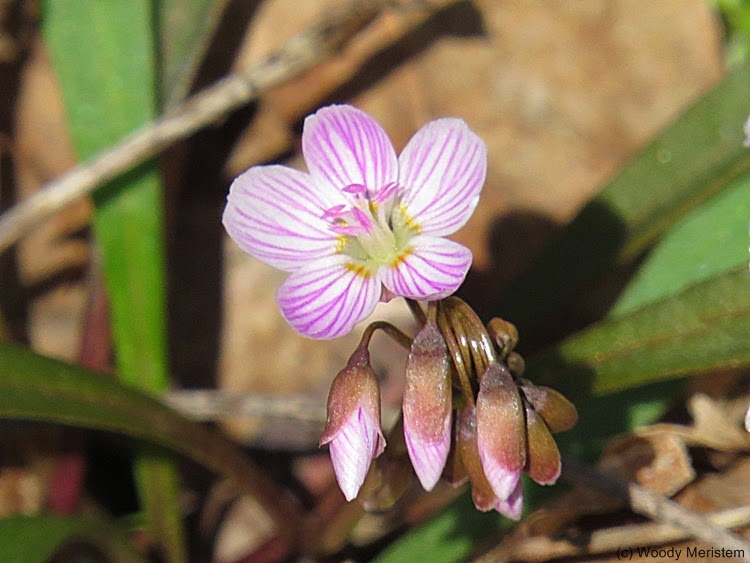 As did bloodroot, named for the blood-red color of its root’s interior – 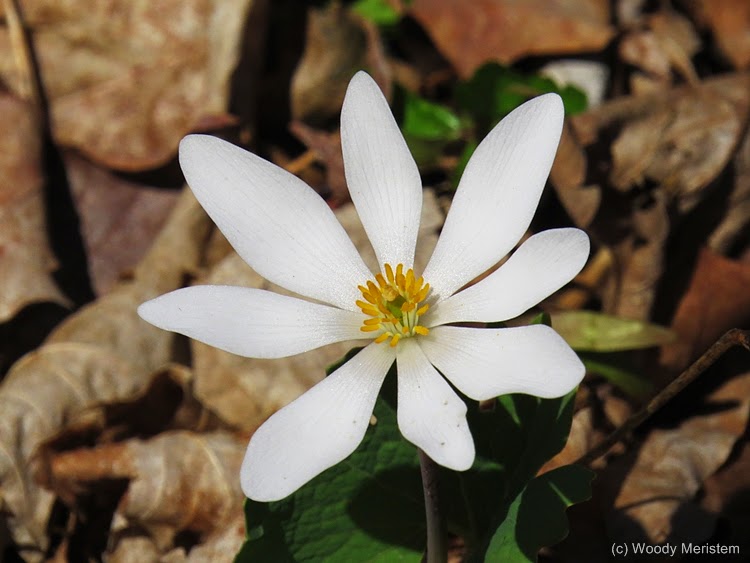 Growing in the same forests is Dutchmen’s-breeches; the individual flowers resemble a pair of upside-down pantaloons, hence the name – 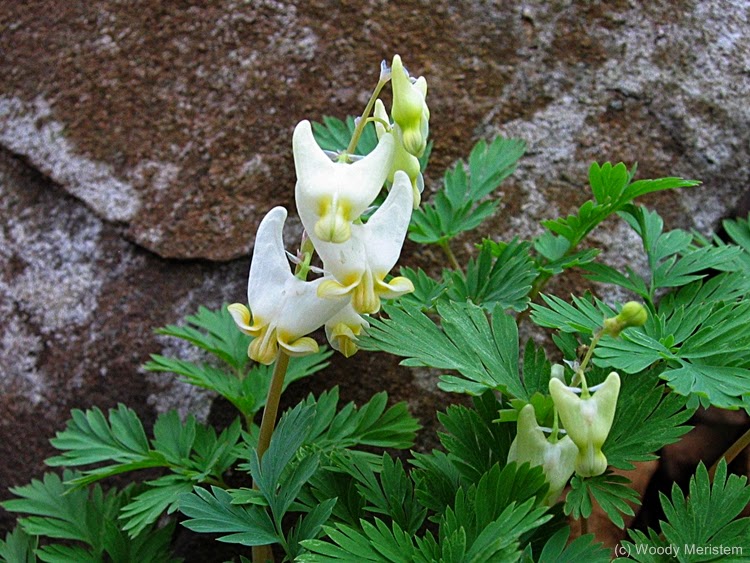 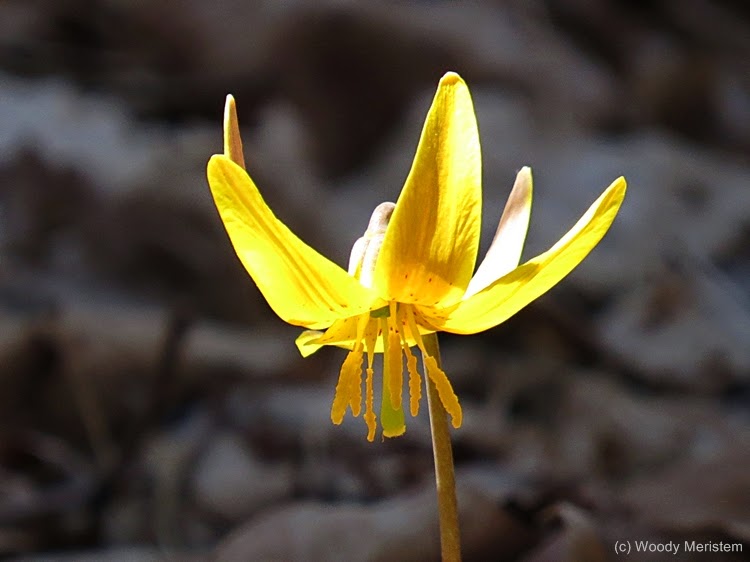 A number of years ago a friend guided me to a population of white trout lily (a different, but closely related, species) that's worth frequent return visits – 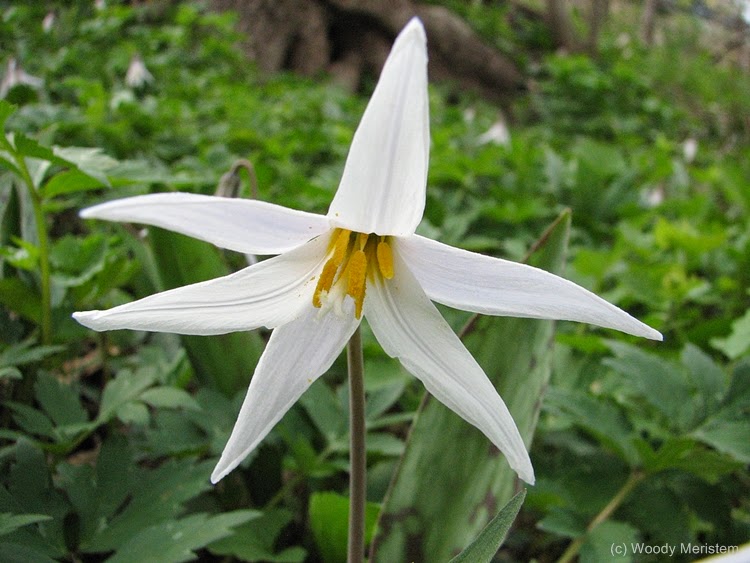 To walk through the forest and see the ground covered with these wildflowers is truly one of the joys of spring.
Posted by Woody Meristem at 5:27 PM No comments: 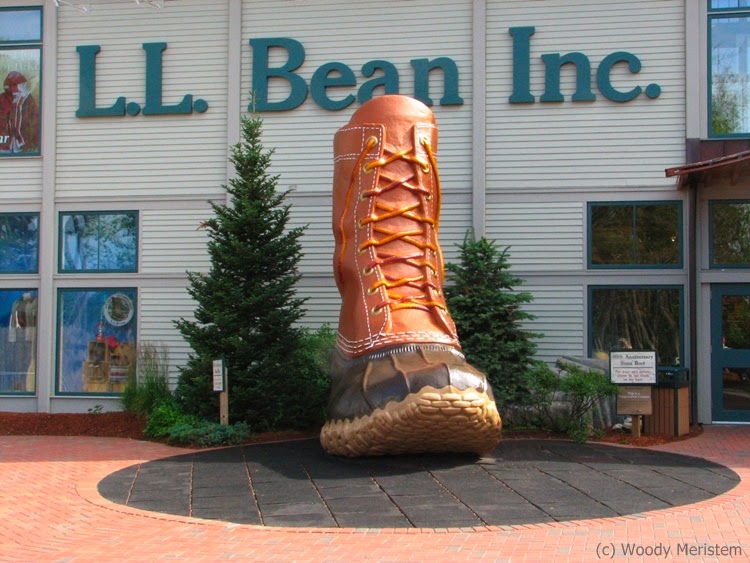 Years ago I bought two pairs of “Bean Boots” (more properly called “Maine Hunting Shoes”) from L.L. Bean of Freeport, Maine. These are the original style rubber bottom-leather topped boots that were first sold in 1912 – No, the boots I own are not 1912 vintage, I’m not that old – and were purchased in the 1970s. They’re ideal for wear in wet or muddy conditions, although a friend and coworker wore his Bean Boots almost every day he was outdoors, all year round. 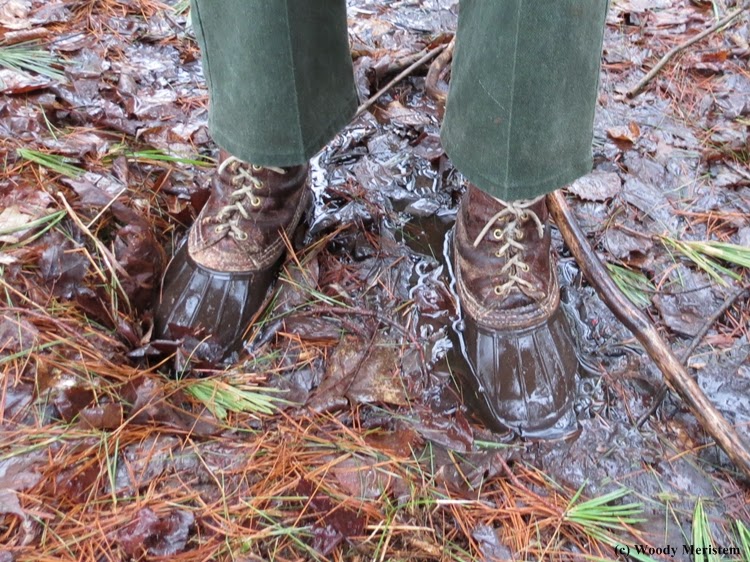 The original chain pattern soles on these boots didn’t provide the best traction and wore out fairly quickly, so I had the bottoms replaced. Back then the company offered an option to replace the original rubber bottoms with new ones that had Vibram soles. Over a decade and many, many miles later, when those Vibram soles had worn down, both pairs of boots went back to Bean’s for a second set of new bottoms with Vibram soles, some re-stitching and a couple of leather patches. Unfortunately, L.L. Bean no longer offers the option of Vibram soles when the boots are sent in for new bottoms. 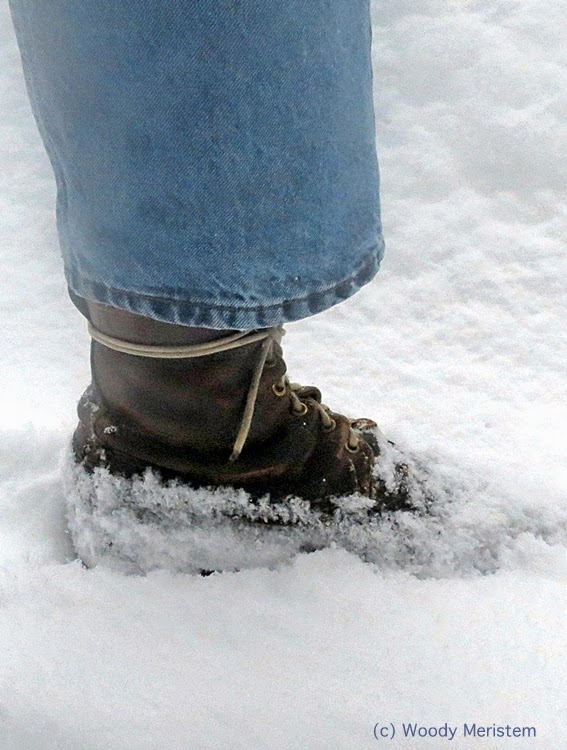 Although my Bean Boots aren’t insulated, I’ve worn them at 25° below zero with two or three pairs of woolen socks. With old style 10-point crampons on, they’ve helped me make my way up frozen waterfalls and climb above timberline on glare ice to the top of some Adirondack High Peaks. They’ve been on my feet as I crawled to the top of one of those High Peaks when the sustained wind speed was so high that it was impossible to stand upright much less walk. They’ve been in mud to and beyond their top eyelets in wetlands and newly constructed roads; and they’ve occasionally been coated in manure. The bindings on my snowshoes fit them perfectly because, when we’ve had enough snow to need snowshoes, the Bean Boots were the only ones I wore. They’ve been on my feet on long hikes and daily walks. 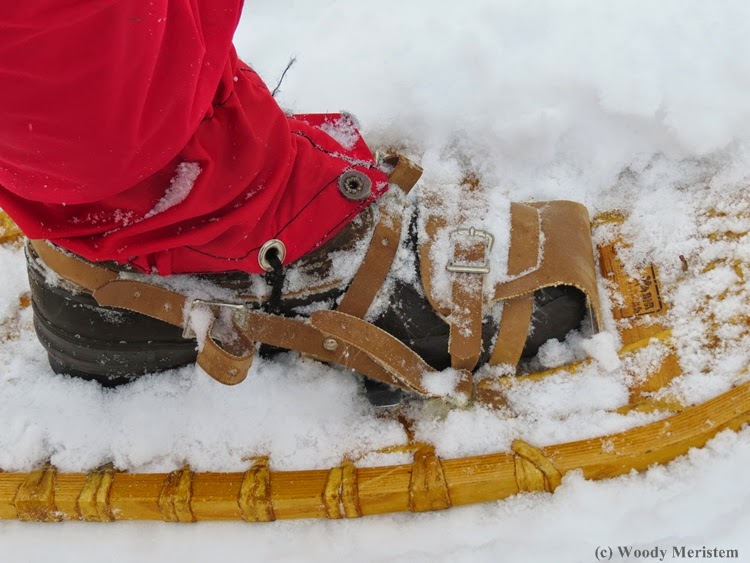 One pair just went to the local boot repair shop to have some torn stitching repaired, and the other will follow suit. Both pairs of boots still provide good service – in winter snow and the mud time of spring; in the dew of autumn and on days of rain – they’re on my feet whenever it’s wet and I venture into forest and field. 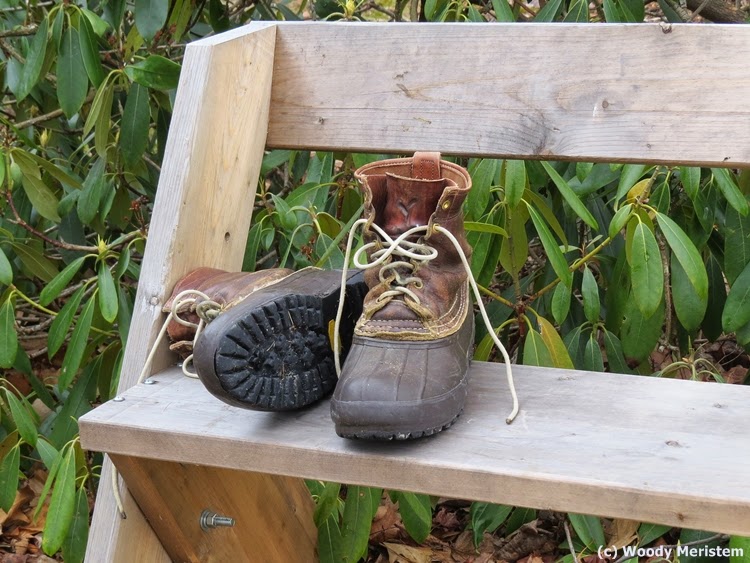 No, this isn’t an ad for Bean Boots or a non-celebrity endorsement, it’s just a token of affection for the old boots (and the folks who made them) that have accompanied me at work and at play and carried me to some beautiful places and grand experiences.
Posted by Woody Meristem at 7:40 PM No comments:

Sad Day - and some good too

Fifteen years ago on a steep, rocky hillside I found a small patch of old growth hemlock, white pine and oak. Following that discovery I made several return trips, but haven’t been back in over a decade. Presumably the old time loggers didn’t cut the trees because a good teamster would have been careful not to take his horses into terrain where the risk of injury to them was high – they were his livelihood. This spot is near the mouth of a tributary to one of the largest streams in the area, where floating the logs to any of several sawmills eight to ten miles downstream would have been easy.

The lower slopes of this hillside were logged at least 150 years ago as shown by several old skid trails that were used to move the logs down to the stream. 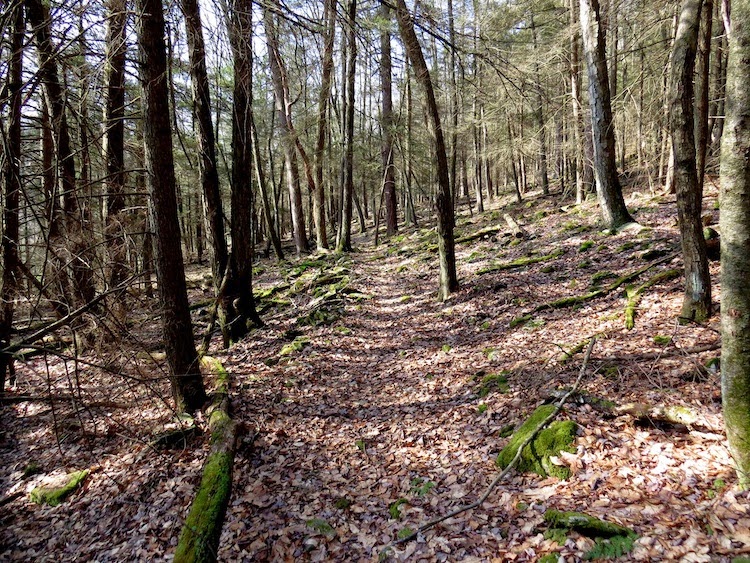 Yesterday, one of the skid trails made for a pleasant hike uphill through a second growth forest that now, after all these years, has many large trees that many would consider “mature”. The skid trail ends well below the old growth; to see the large old trees then requires a scramble over moss-covered rocks and logs and clambering over or around fallen trees – on steep hillsides such as this, many trees succumb not to old age or loggers but to the force of gravity. 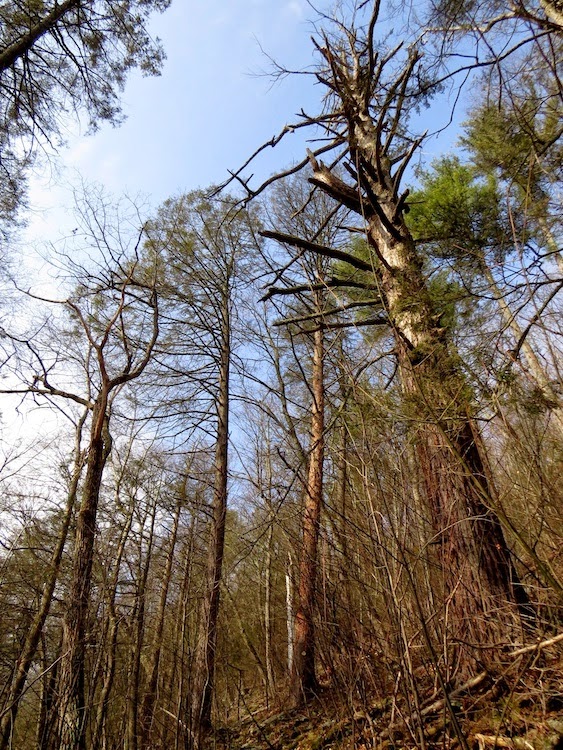 When I got to the old growth it was painfully obvious that all of the hemlock was dead or dying; the result of feeding by the invasive hemlock wooly adelgid. The hemlock wooly adelgid is a tiny insect that feeds by sucking sap from young twigs on hemlock. It has been killing eastern hemlock for many years, but has only been impacting hemlock in northcentral Pennsylvania for about a decade. 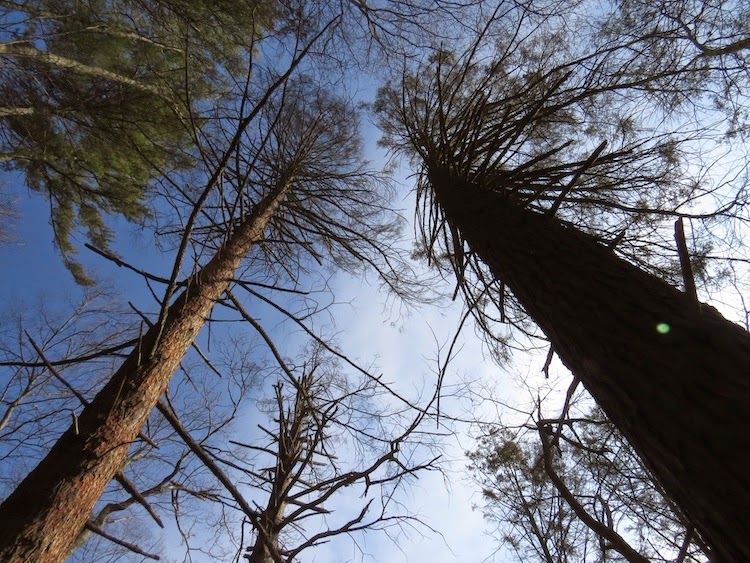 On the lower slopes, presumably due to more moisture, better soils and the younger more vigorous trees, most of the hemlock looked much healthier, even though adelgid can be found on most trees. 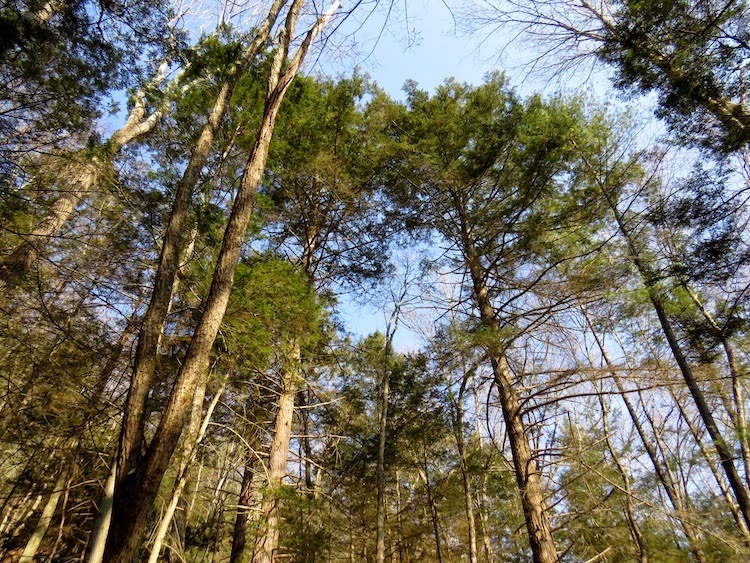 A short drive and a walk of about one and a half miles led to Jacoby Falls a pretty, although not spectacular, waterfall. 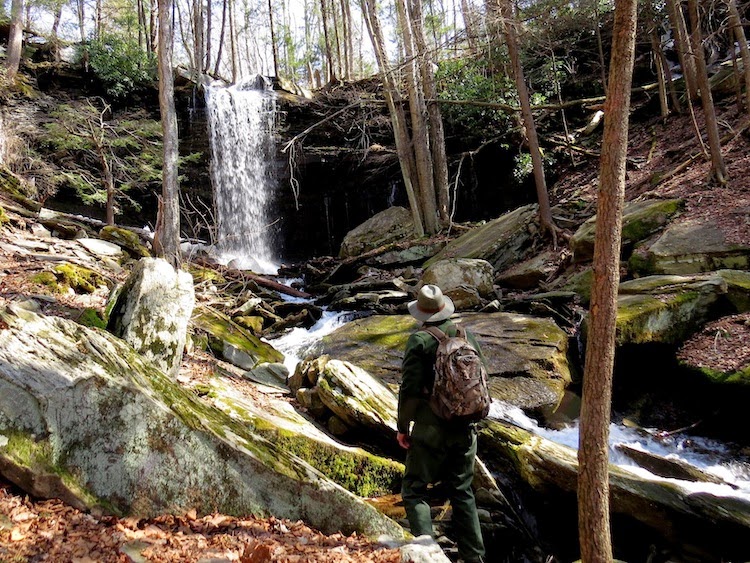 Posted by Woody Meristem at 5:14 PM No comments:

Changed the batteries and memory card in one of my camera traps in the Big Woods earlier this week. Previously I had put some beaver castoreum on a short piece of a dead branch lying in front of the camera.

One camera trap, which seems to always have something interesting on the card, had quite a few photos of a good sized male bear that stopped to smell the castoreum. The bear didn’t just stop to take a whiff – first it walked up to the camera and examined it closely, having its picture taken five times. It then turned and walked back to the piece of dead limb with the castoreum – smelled the castoreum, then lay down on the dead branch, got up and lay down again, and finally it apparently rubbed against the stick as a dog would rub and roll on something with a strong odor. 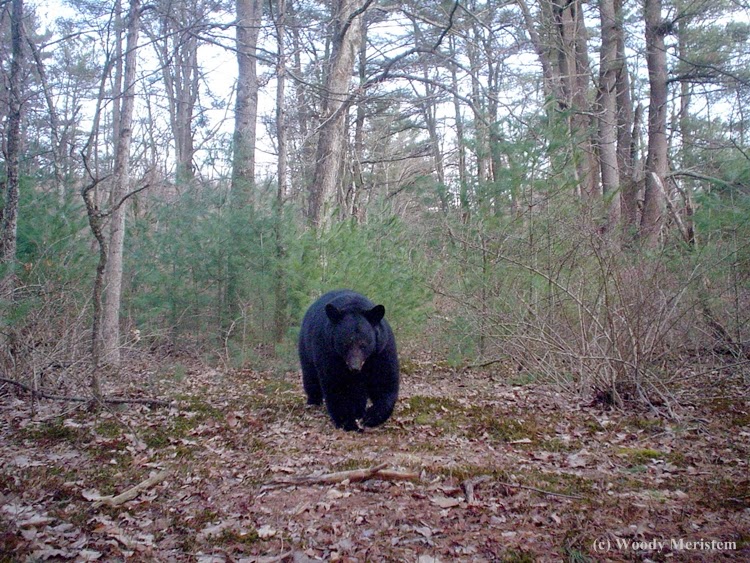 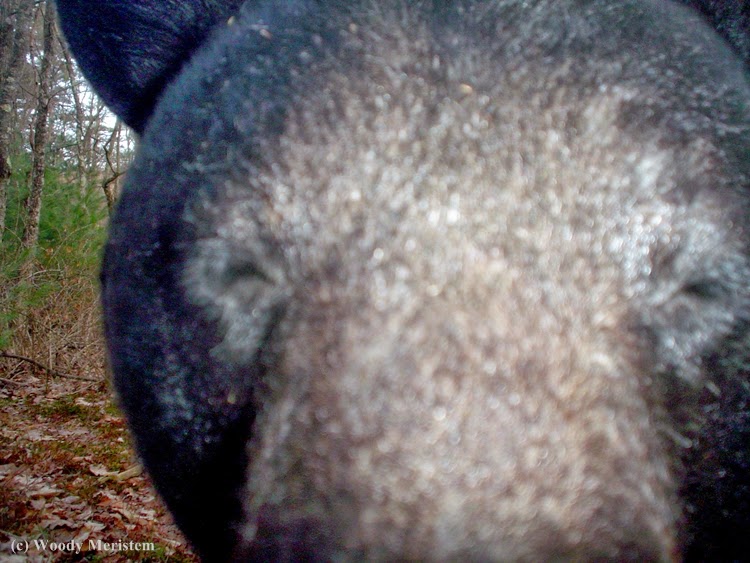 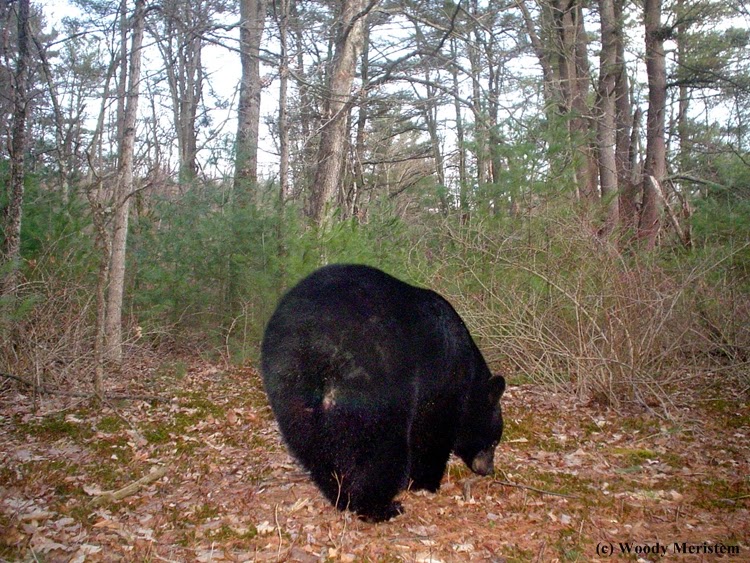 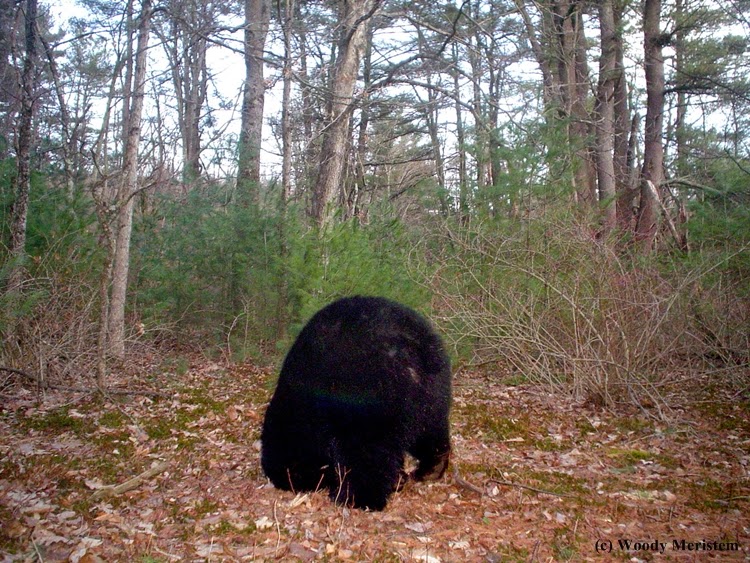 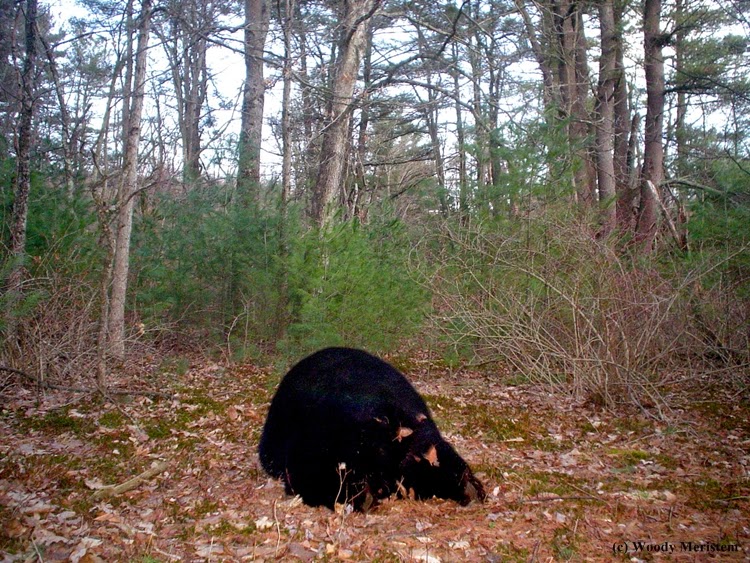 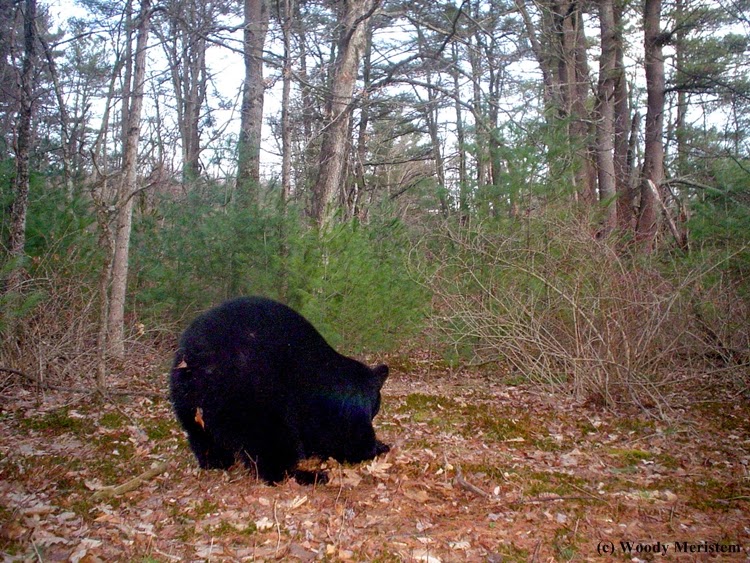 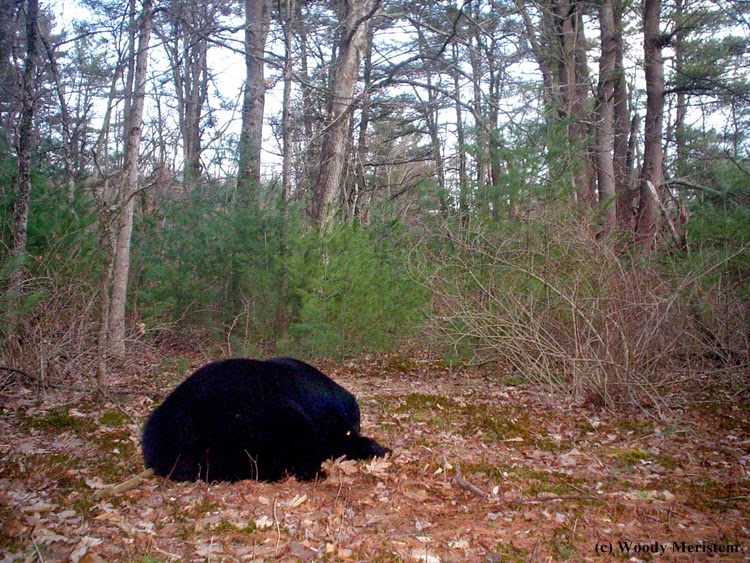 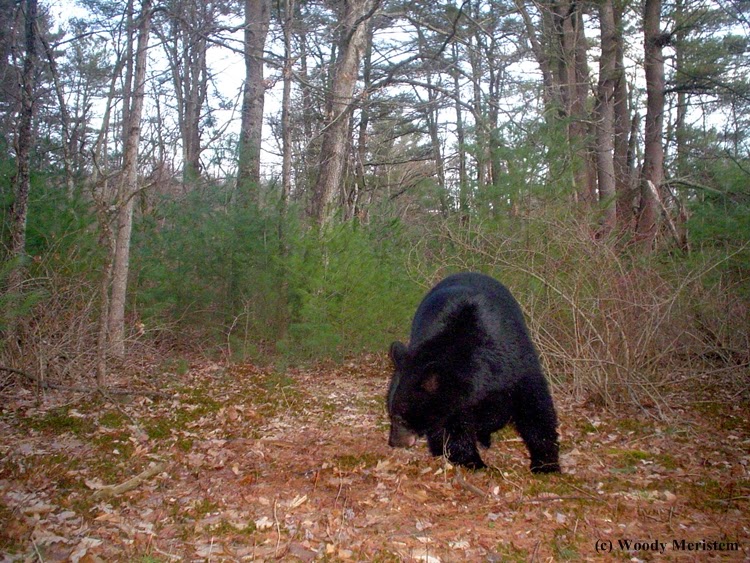 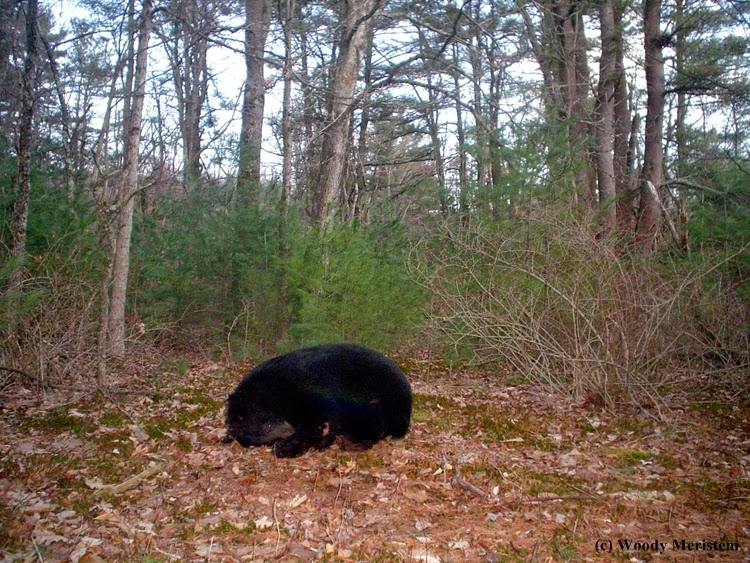 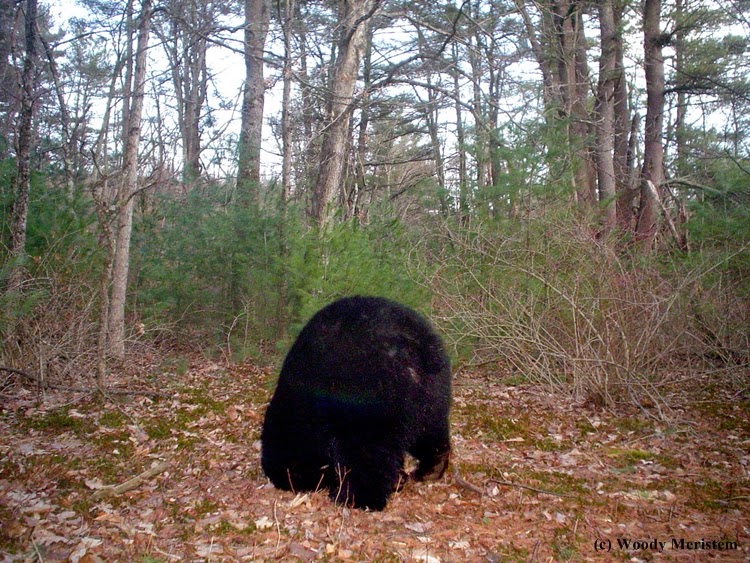 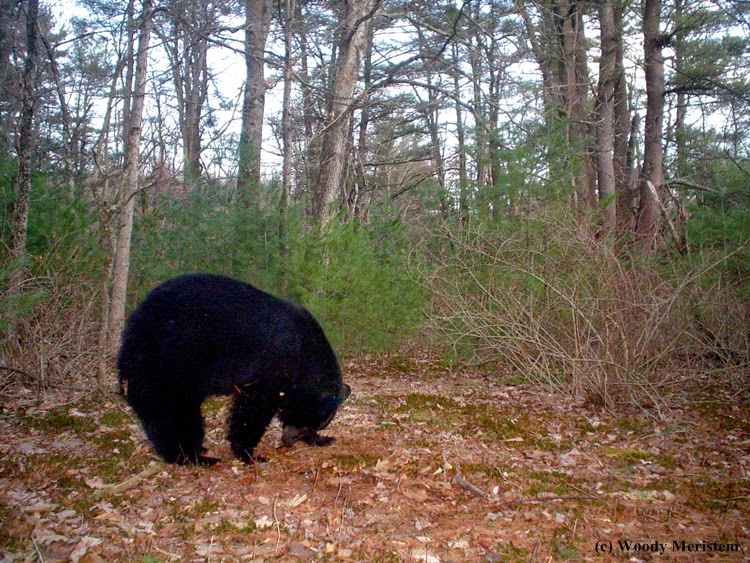 From the first photo to the last, he spent eight minutes in front of the camera.
Posted by Woody Meristem at 9:26 AM No comments: