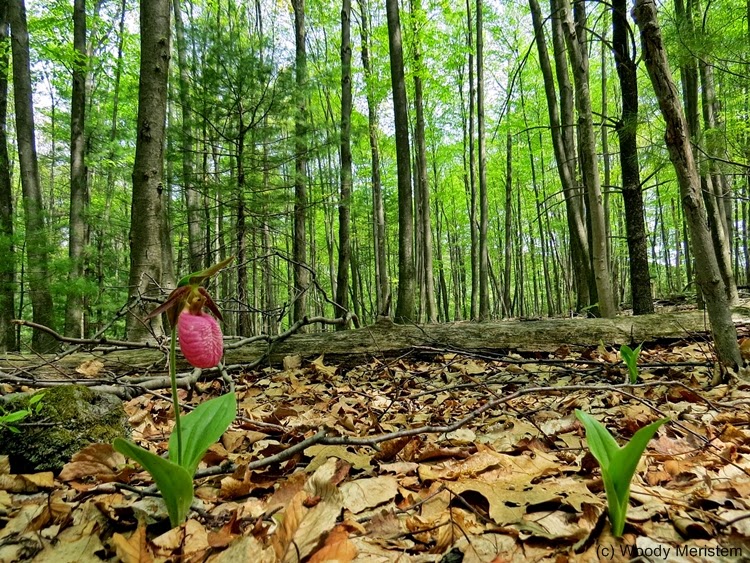 Walked around on an old farm near the edge of the Big Woods to look for the pink lady’s-slippers (also called moccasin flower) that I’d seen there in past years. Although several of the old fields are still mowed for hay, most of the formerly cleared areas have now grown back to forest. In only 15 minutes of walking I saw well over 100 plants in bloom and several hundred more too young to flower – they don’t bloom until they’re several years old.

Pink lady’s-slippers are the most widespread and common lady’s-slipper in this area, growing on acidic soils, typically in oak or hemlock forests – but also in conifer plantations. 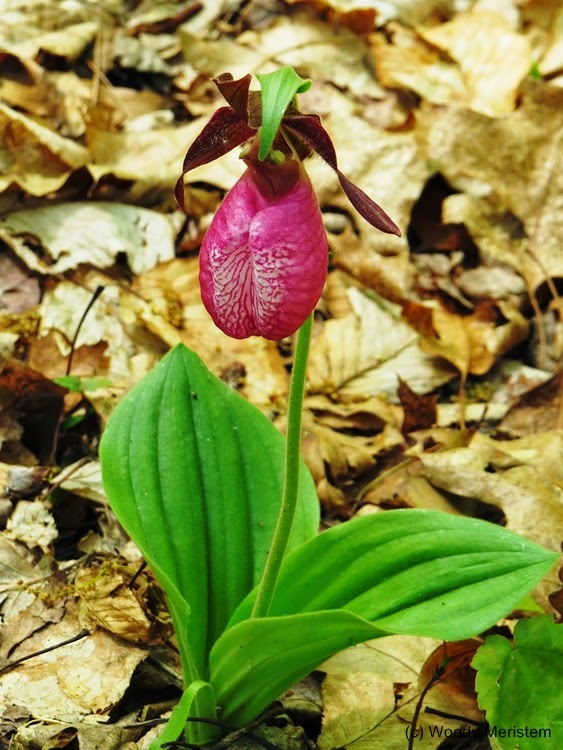 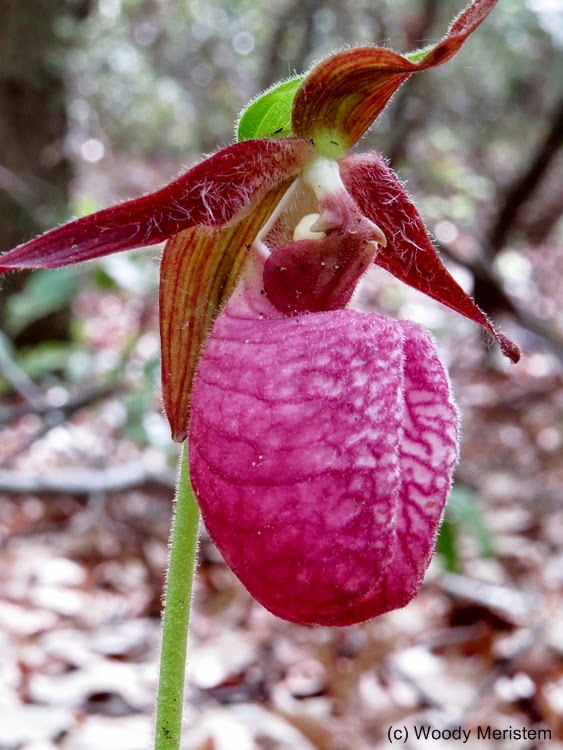 Although there were a lot of pink lady’s-slippers in this old field now reverted to forest, with often more than ten flowers in view at any one time, it was not the grandest assemblage of pink lady’s-slippers I’ve ever seen. That honor belongs to another place and another time – a red pine plantation on a worn-out agricultural field in what is now a small State Game Land. There were thousands of flowering plants in just a few acres as can be seen in my photo from the 1970s. 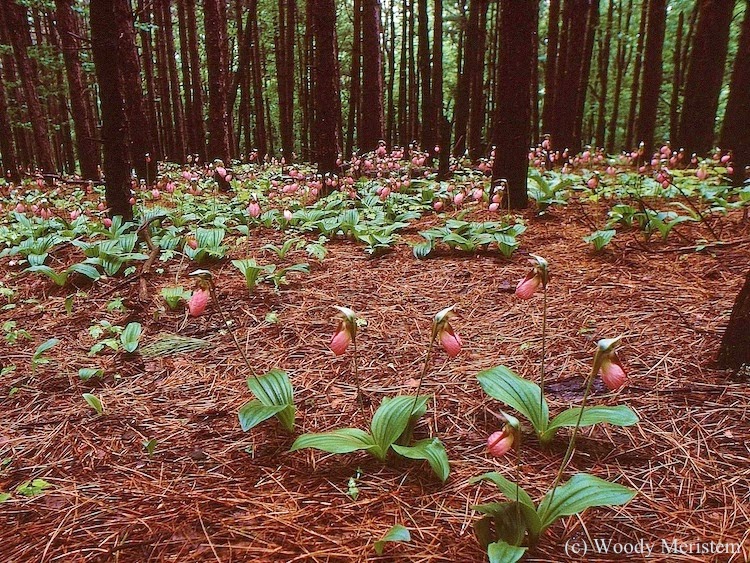 That display of lady’s-slippers could be enjoyed each spring for several years, but in the intervening decades conditions have changed and but a few scattered plants can be found there now.
Posted by Woody Meristem at 4:44 AM 2 comments:


Trilliums or lady’s-slippers, lady’s-slippers or trilliums – which are my favorite wildflowers? I’ve never been able to decide. But certainly one that’s near the top of the list is the orchid called yellow lady’s-slipper (Cypripedium parviflorum). 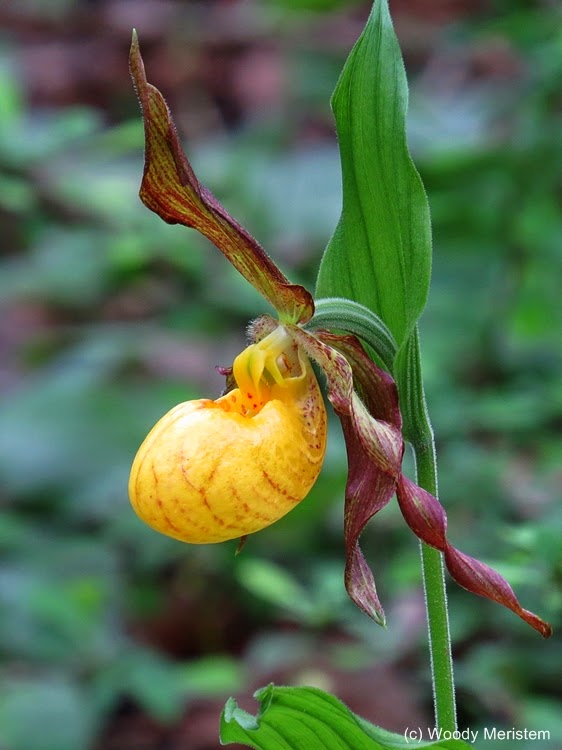 In this area there were three populations of which I was aware, two in the Big Woods and one about 15 miles to the east in a large patch of woodland surrounded by farms and spreading development. Unfortunately, in the 40 years since I first saw them, two of the populations have disappeared. In both cases the habitat appears to be unchanged, but white-tailed deer seem to find the plants quite palatable and are probably the cause of the disappearance.

During a 1970s visit to the third population I counted 72 plants in bloom. They were accompanied by an uncounted number of plants that were not bearing flowers. A more recent trip to see those plants was cause for alarm, as there was but a handful of blooms and only a few non-blooming plants. This spring I went back, fearing that the plants would be gone. 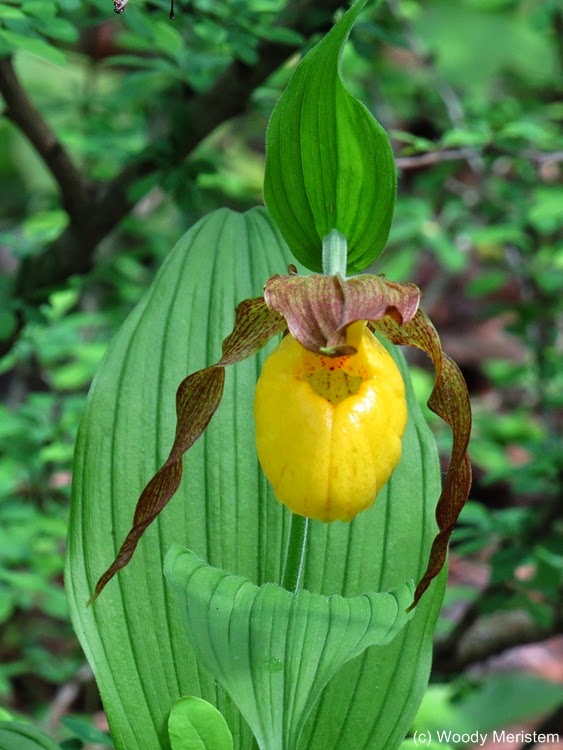 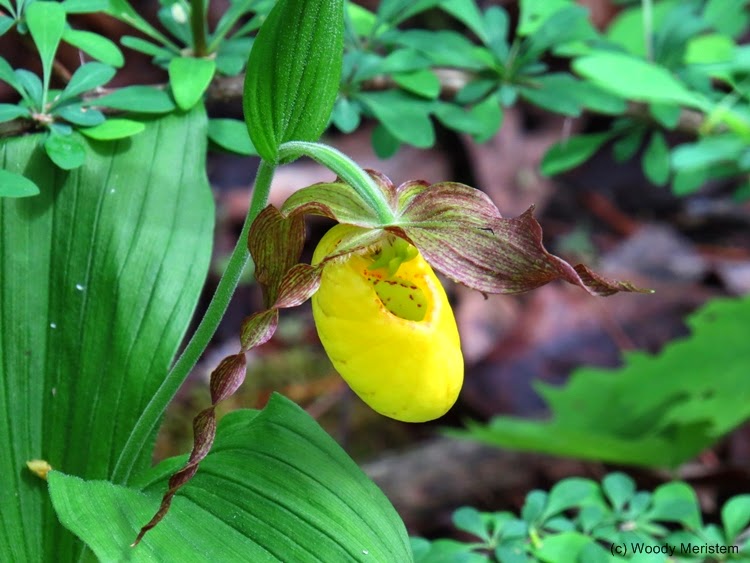 This population of yellow-lady’s-slippers is (and has been since I first saw them) confined within a radius of about 150 feet in an old field that was abandoned during or shortly after World War I. The stonerows along the edges of the old field consist only of large stones, so the field was almost certainly not plowed, but was instead used to grow hay. The old field reverted to a forest of white pine, red maple and black birch with an understory of invasive Japanese barberry. Perhaps the thorny and unpalatable barberry has protected the lady’s-slippers from deer.

What’s different about this small area of a much larger old field, or similar areas along the same hillside, that has made it hospitable for yellow lady’s-slippers? To human eyes it looks the same as many other acres – maybe it’s the soil’s pH or texture, the degree of shade, or mere chance, or …

Here’s hoping that for years to come this population of yellow lady’s-slippers will be there to brighten the day of folks who come upon them. 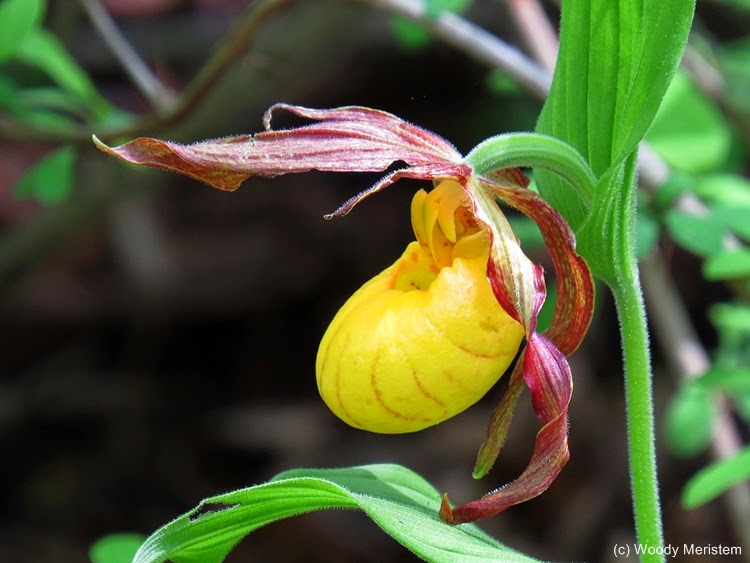 Posted by Woody Meristem at 6:00 AM No comments:

This was a different bear, a different stick, in a different place than shown in the first post – and this time the bear’s reaction was even more interesting –

After the last photo in the video, the bear departed, walking past another camera trap about 50 feet away. 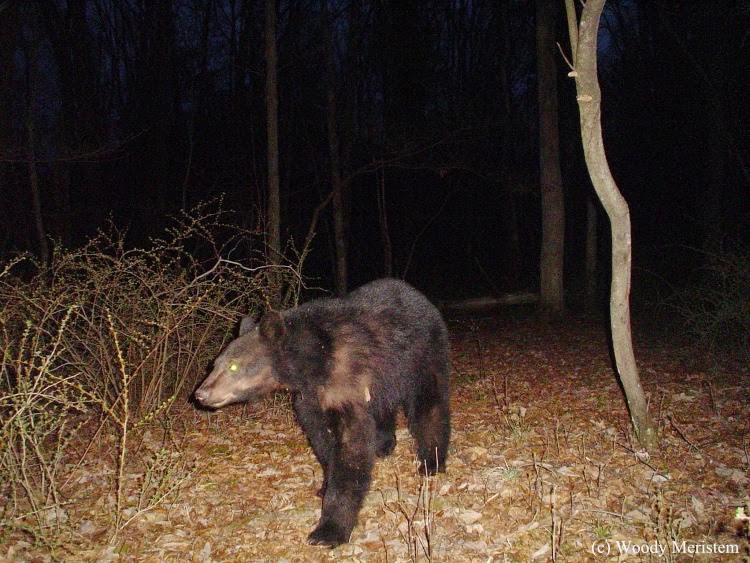 Posted by Woody Meristem at 9:32 AM No comments:

Pileated Behind A Rock

It was a cool morning when I left the house headed for the Big Woods, but after walking for about a mile with a bright sun beating down through the still leafless trees it was time to shed the vest beneath my light camouflage jacket. Camo clothing really makes a difference in the amount of wildlife seen and how close I can get before they flee. It even makes a difference when walking at a normal rate. Birds and mammals obviously see the movement, but apparently have a great deal of difficulty in determining what they’re seeing.

On this day I stopped, shed my pack and put it down, got a water bottle from the pack, took a long drink and put the bottle back in the pack – then a slight movement off to the side caught my eye. The movement was the head of a female pileated woodpecker repeatedly popping up from behind a rock about 30 feet away (females have a black stripe from the base of the bill, males’ stripe is red) – 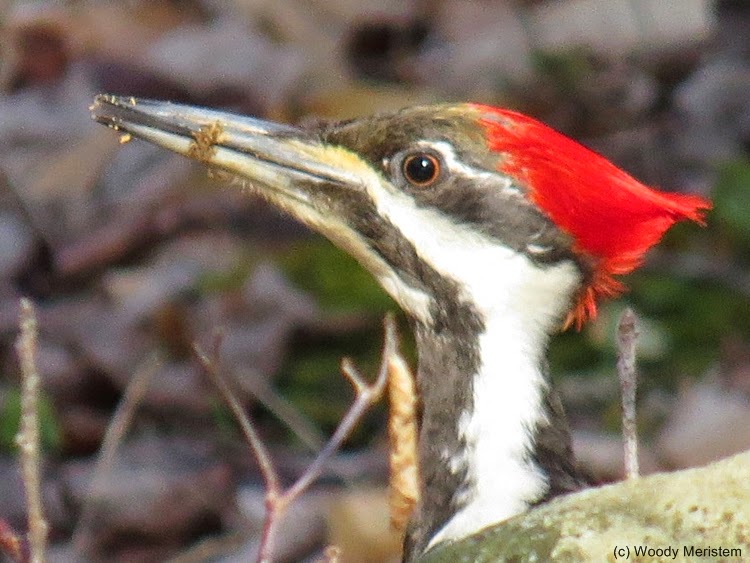 As I watched the head repeatedly popped up and disappeared. The bird raised its head to look around after each blow it delivered, and frequently chips flew. At about 20 seconds into the video it can be seen swallowing something that can’t be identified, but is probably the larva of a stag beetle (they normally inhabit rotten wood).

I watched for quite a while and the bird never deviated from its methodical hammering and looking around. Eventually I slowly moved to the side to get a better view around the rock. With that, she moved on the small fallen tree where she had been working and continued feeding – 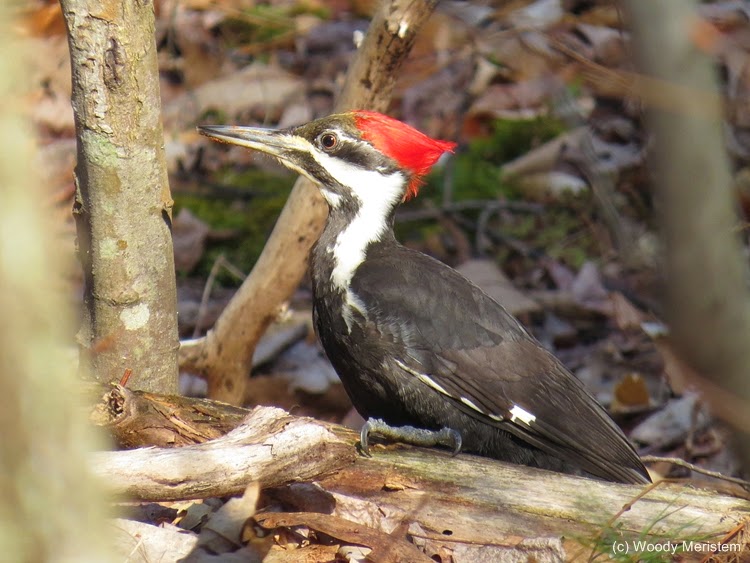 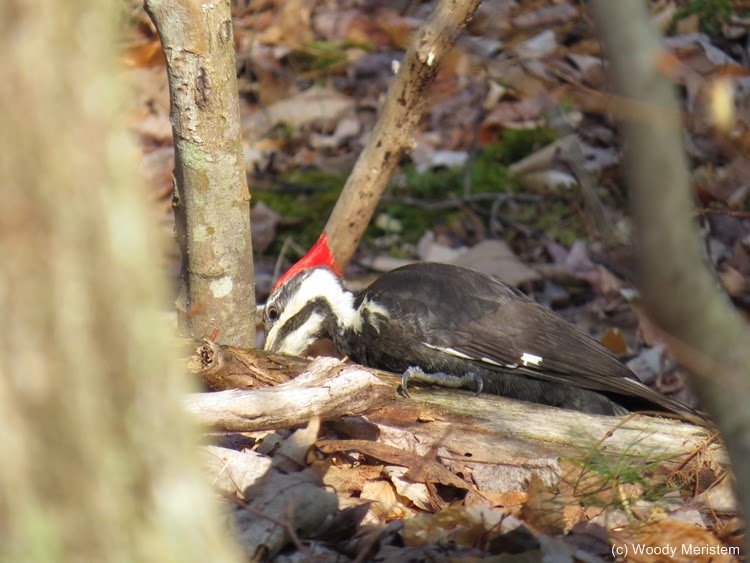 Subsequently she flew to a nearby small tree – 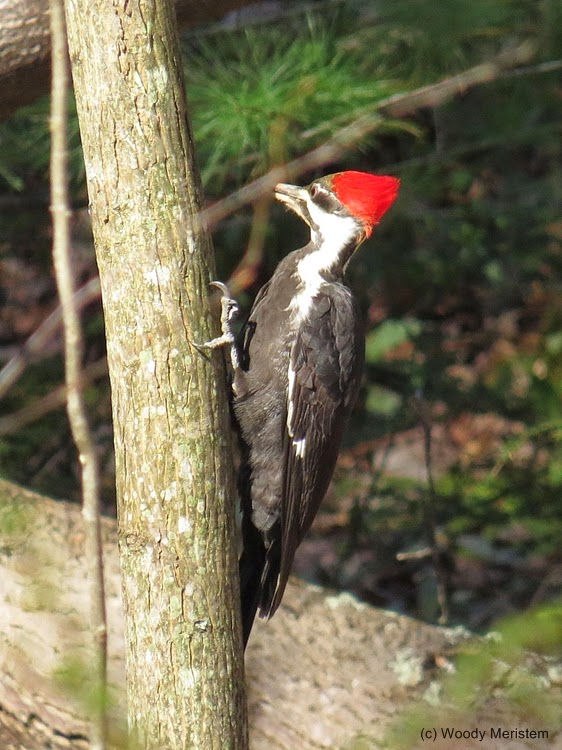 Eventually the bird flew about 15 feet directly over my head and off through the forest.

Pileated woodpeckers are typically very wary birds and don’t allow a close approach. While walking it’s not unusual to hear the alarm calls of four or five birds for each one I see. Was this bird unusually unwary or preoccupied as it fed? Or was it the camouflage that kept it from perceiving me as a threat?

Posted by Woody Meristem at 7:36 PM No comments:

Loon in the River 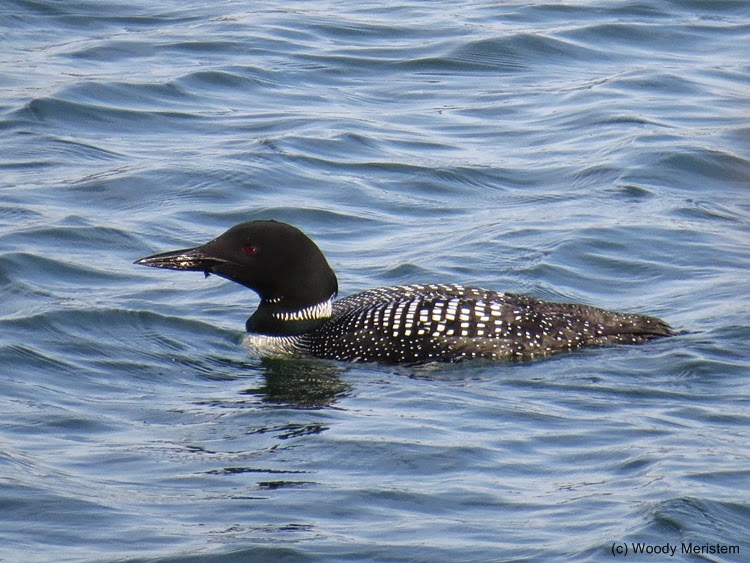 Common loons don’t breed in Northcentral Pennsylvania, although occasionally one will spend the summer in the area. Those are typically either first-year birds that aren’t ready to breed or ill birds, usually suffering from lead or mercury poisoning. This bird in non-breeding plumage was here in July.


More common are birds that are passing through on their way north to breed or, in the fall, on their way to spend the winter on the ocean or saltwater bays.

Walking along the river I saw a loon in full breeding plumage in the middle of the stream. It repeatedly dove and finally made its way closer to shore where the camera could capture decent images. A loons often do, it would swim for a while with its head submerged as it sought prey – 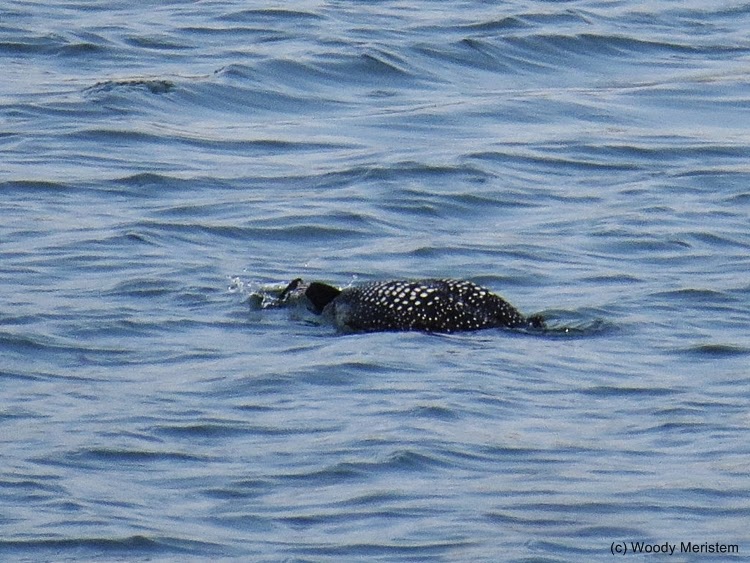 Loons can control their buoyancy, enabling them to sink below the surface without any visible movement – which it did as a helicopter passed overhead – 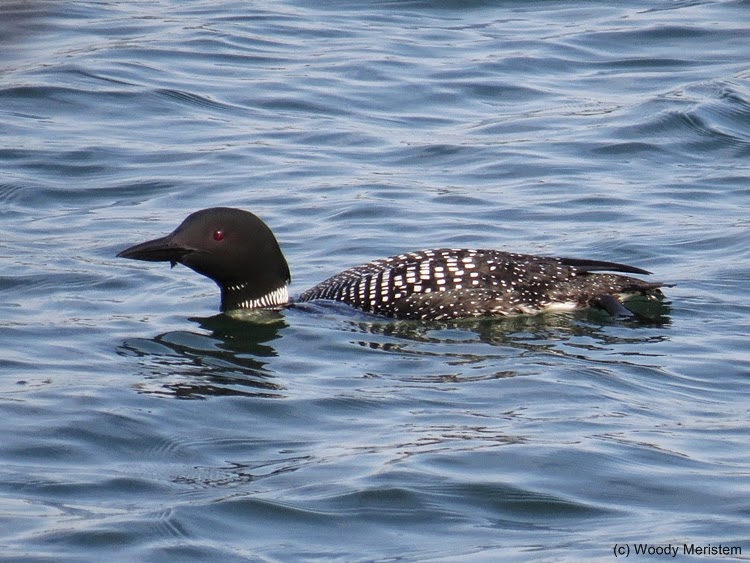 The bird slowly swam further out in the river – 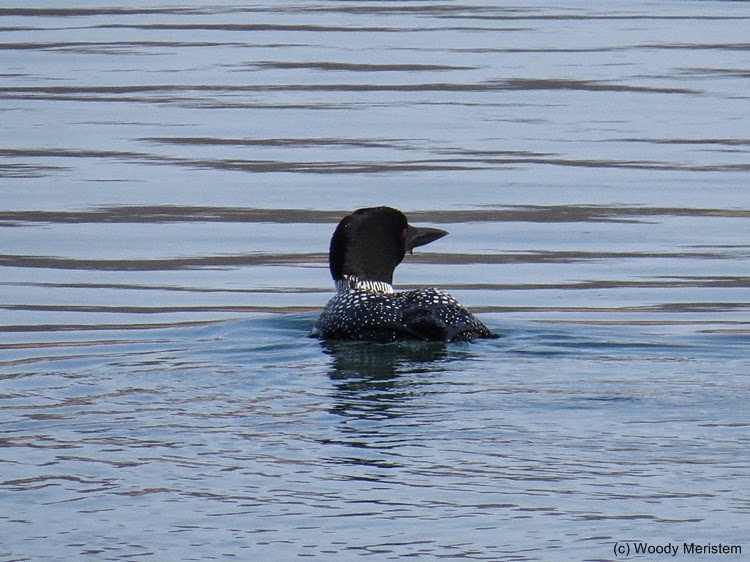 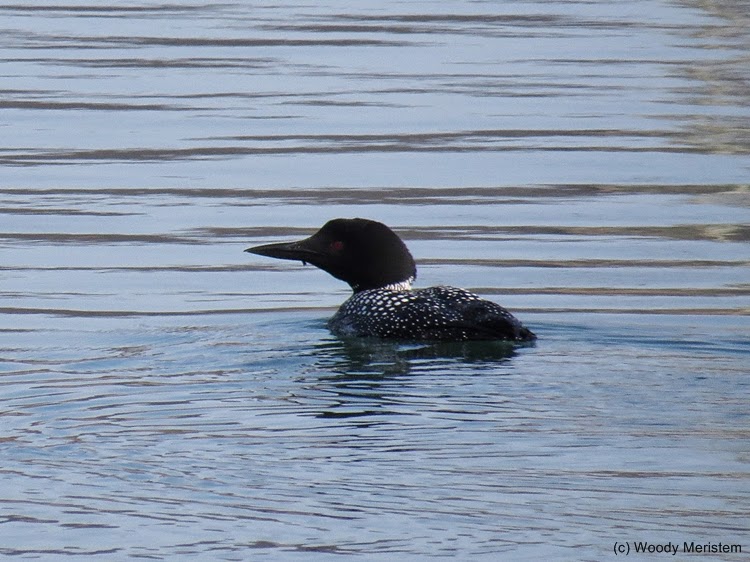 And dove pursuing something to eat – 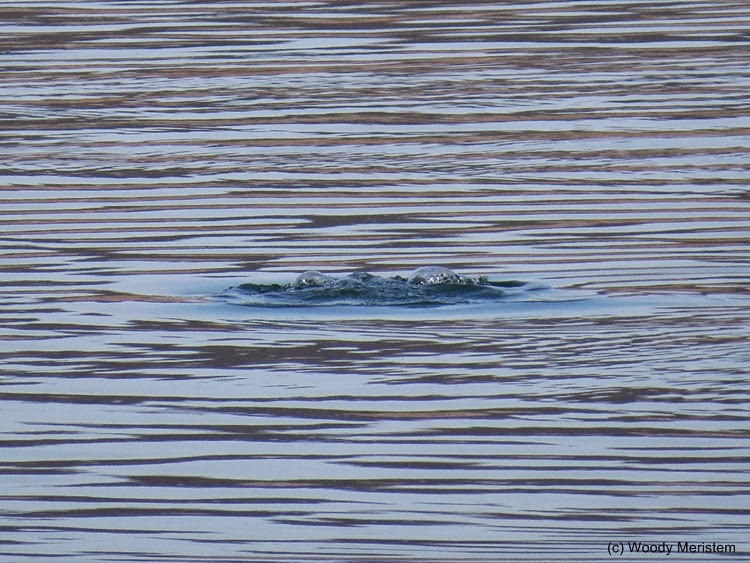 When it finally resurfaced, it was so far out from shore that it was indistinct.
Years ago a friend and I drove around the largest lake in the area during the first week of May and counted 106 loons on the 300 acre lake. The birds were diving and resurfacing frequently which made it hard to get a precise count, but we both felt that 106 was reasonably accurate. There were certainly loons so far from shore that, even though we were using binoculars, we wouldn’t have been able to distinguish them from the rolling waves on the water.

Many years ago I spent a summer on a lake in New York’s Adirondack Mountains; there were several pairs of breeding loons on the lake and their haunting calls echoed across the lake day and night. Thus began my fondness for the common loon, a fondness shared by many folks across the northcountry of the U.S. and Canada. The loon symbolizes wild country and clean water, things that a lot of us do not want to do without. 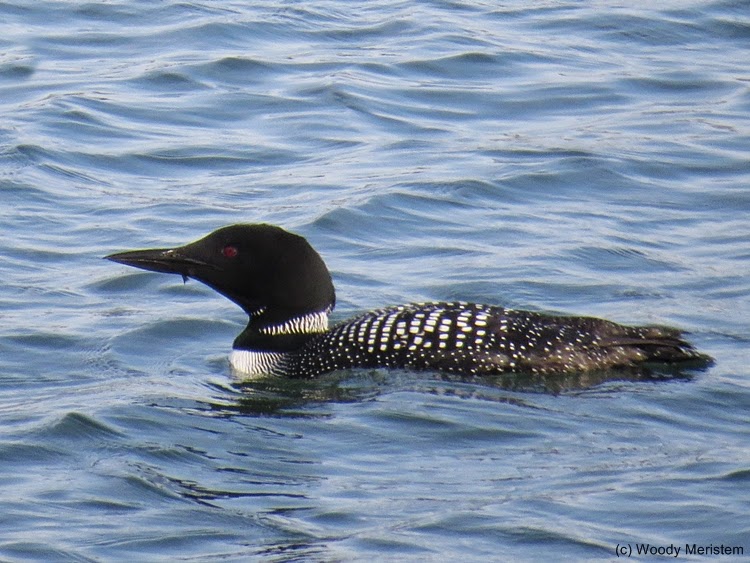 Posted by Woody Meristem at 5:16 AM No comments: