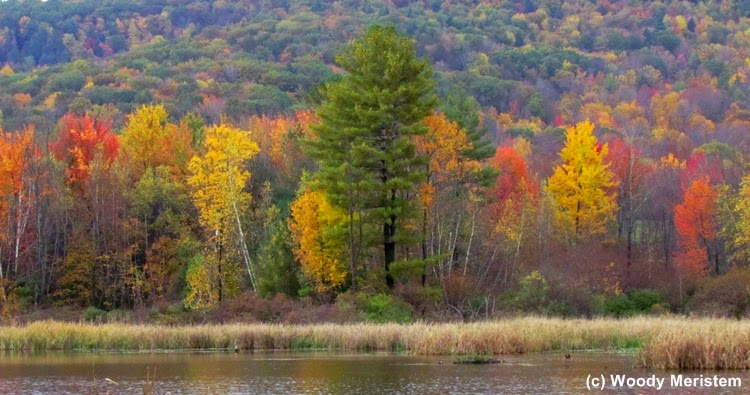 The days have been getting shorter for more than four months and those shortening days triggered changes in tree leaves throughout the northeast. As the days became shorter the production of chlorophyll, the green pigment in leaves that produces sugars, declined and finally ended. The chlorophyll broke down revealing the anthocyanins (red pigments) and the carotenoids (yellow and orange pigments) that had been hidden all summer. As this is occurring an abscission layer of corky material forms at the base of the leaves’ petioles, cutting off the flow of water to the leaves, and weakening the leaves’ connection to the twig – which resulted in most of them falling to earth in the last few weeks.

The entire process resulted in an influx of “leaf peepers” by car and tour bus, all looking to enjoy the brilliant autumnal colors that decorated our hillsides. Even we locals took pleasure in the colorful display, although we may not have enjoyed the increase in traffic on normally quiet rural roads.
The display is almost over now, but photographs remain to remind us of the pleasures of autumn. 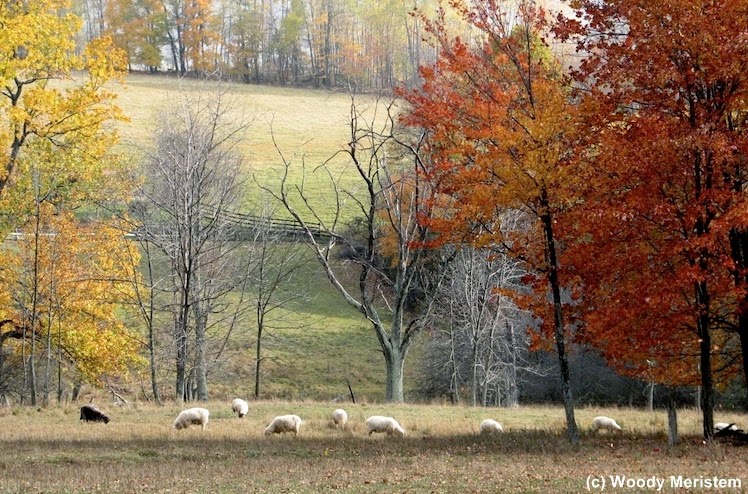 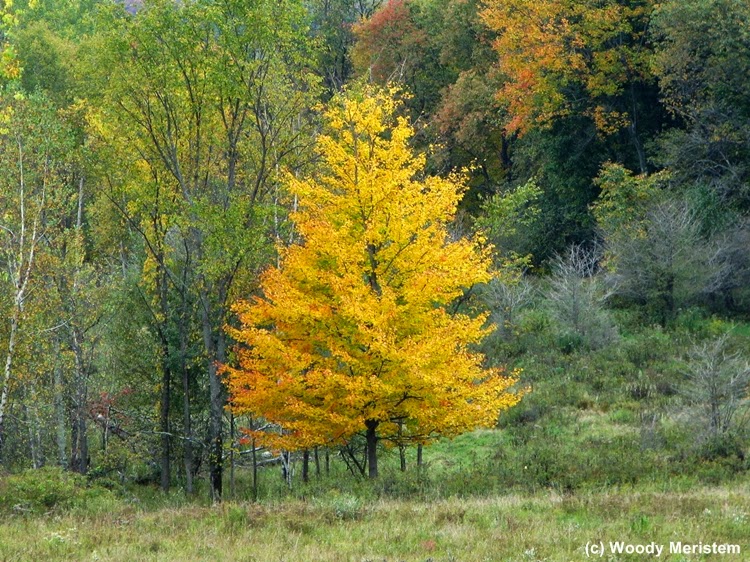 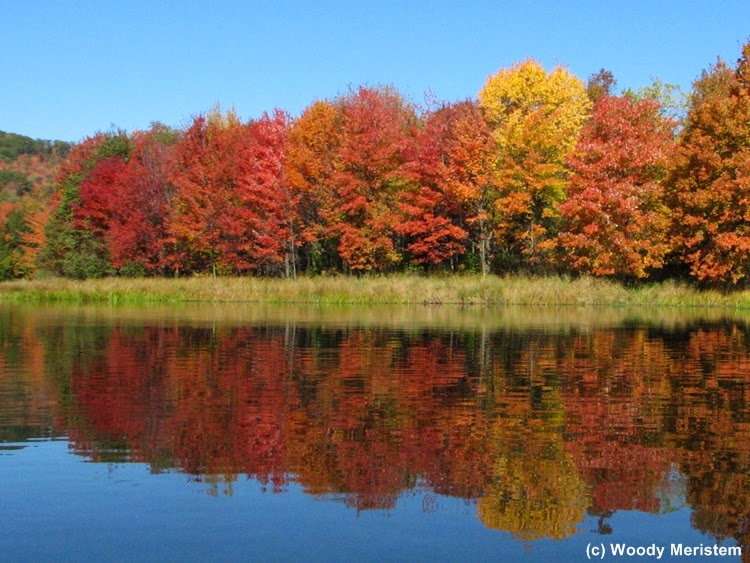 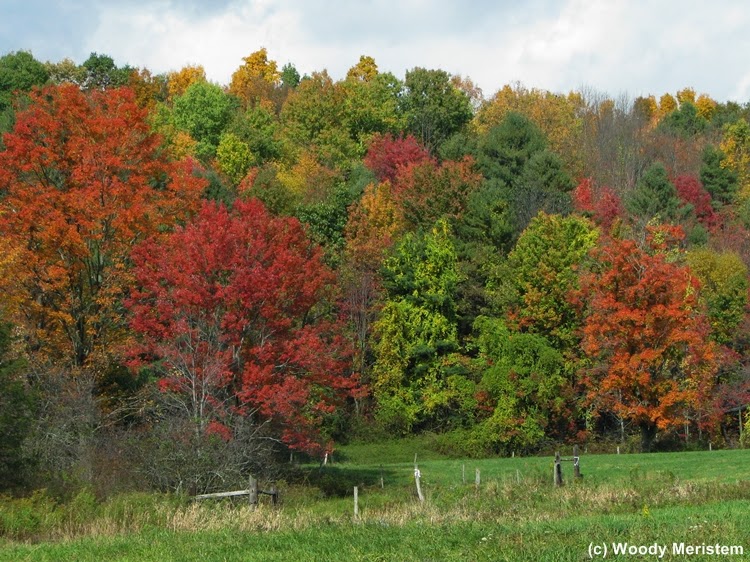 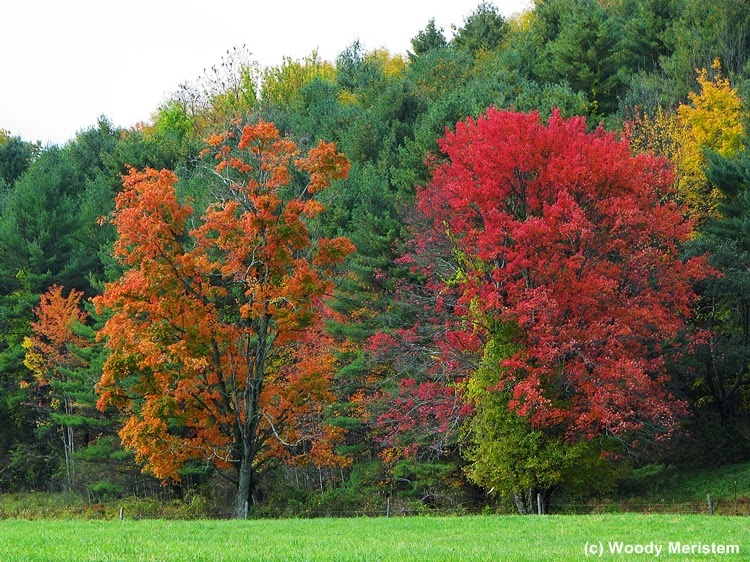 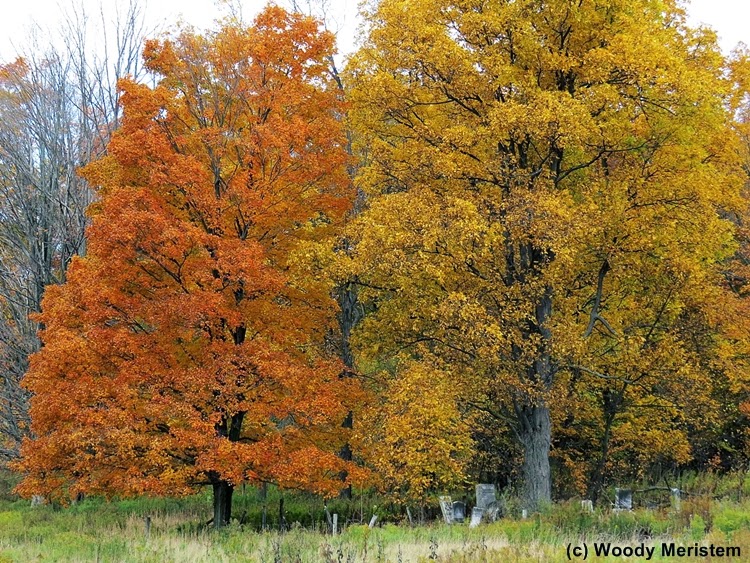 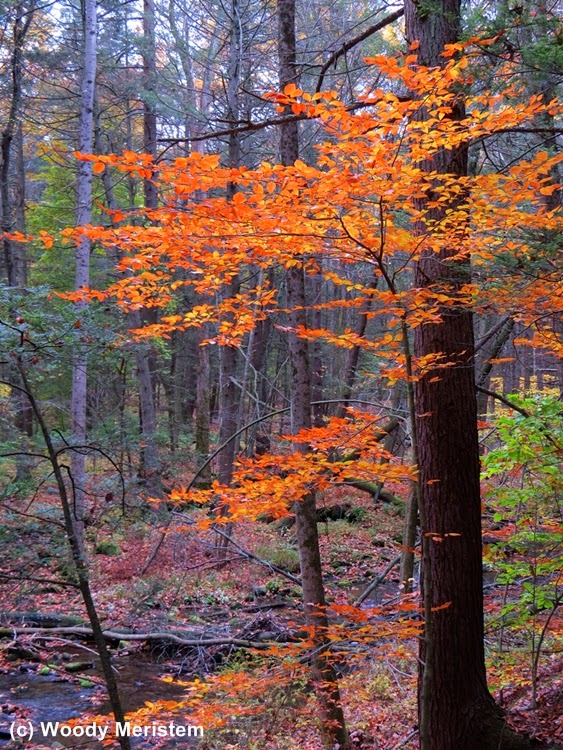 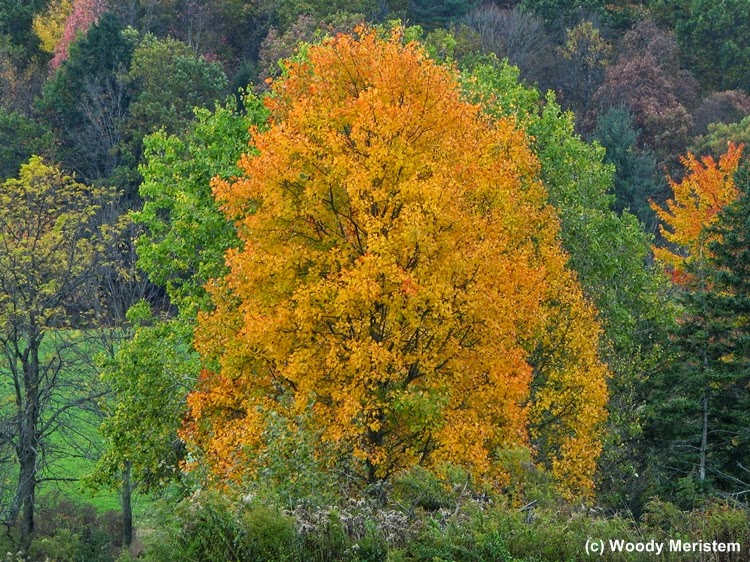 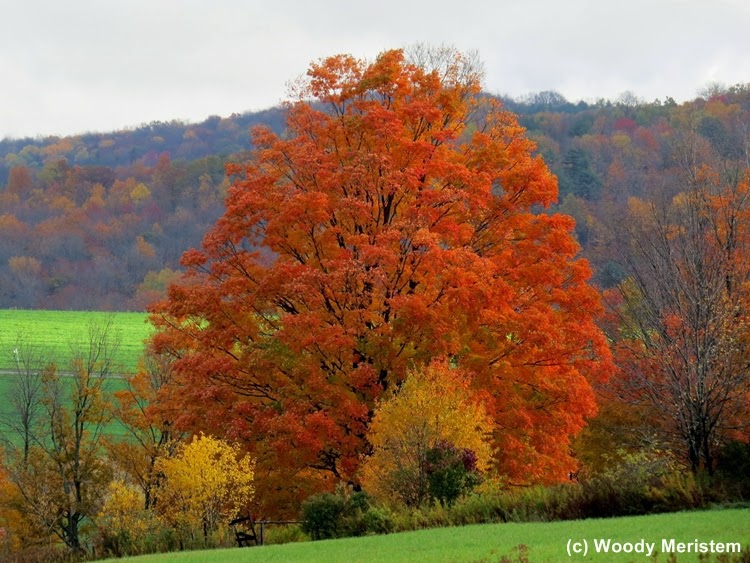 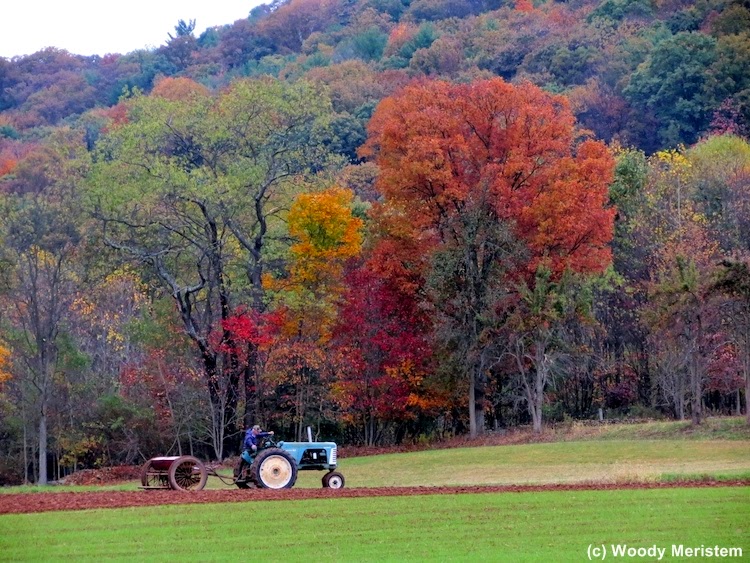 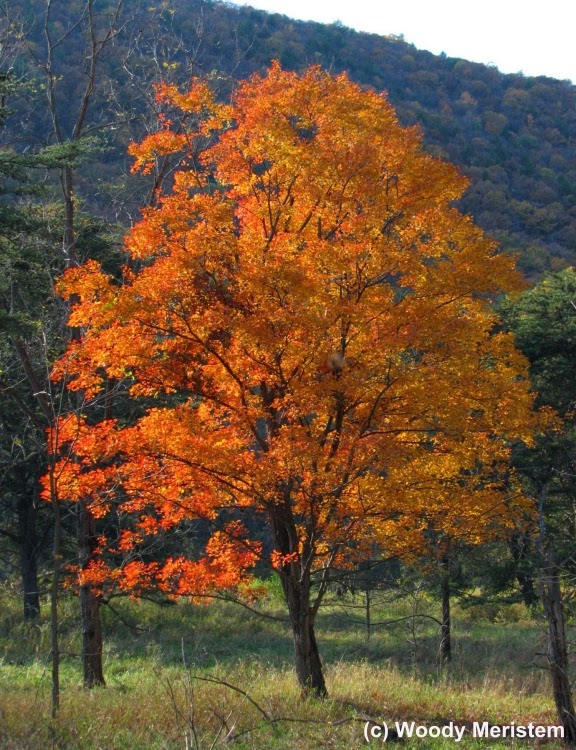 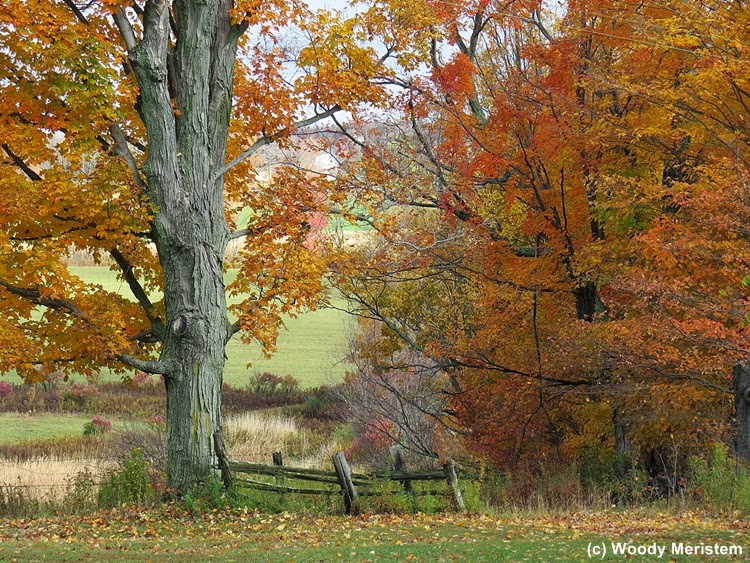 Posted by Woody Meristem at 4:49 AM 2 comments:

Back in September I visited Pennsylvania’s elk range at the peak of the breeding season and recently went back again. By mid-October the elks’ breeding activity is rapidly drawing to a close. Almost all of the females have already been impregnated and the bulls are fatigued from chasing cows and battling rival males.

The big bull that the group of elk photographers call Limpy, and was the subject of a video in my post "September Elk", was still hanging out with some cows -- 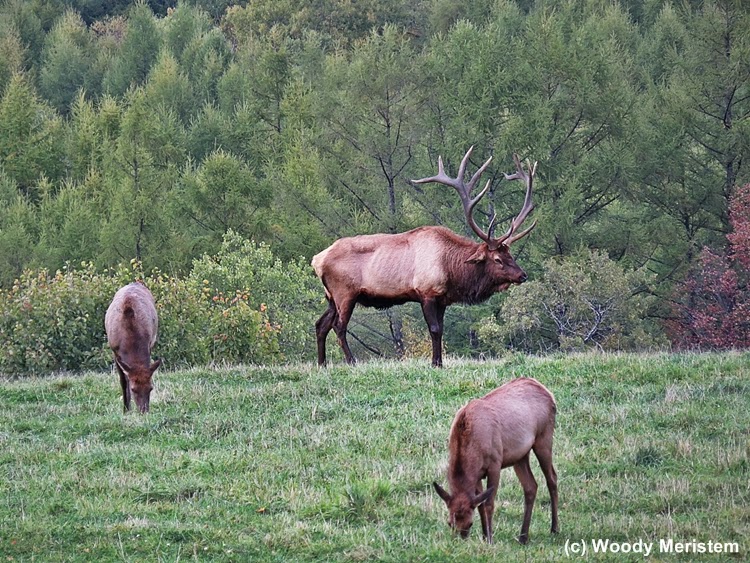 and would bugle occasionally, 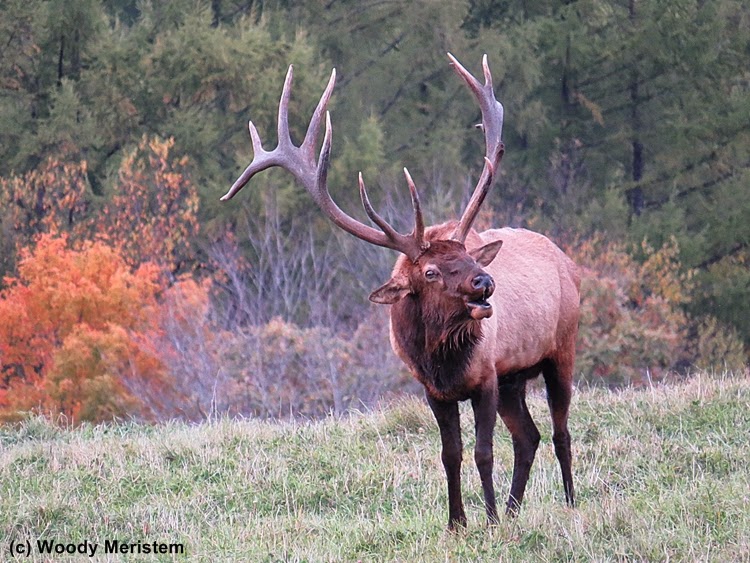 but made no effort to mate with any of the cows.

A younger, but mature, bull that was several hundred yards away was more interested in breeding, was still bugling vigorously and pursuing the cows in his band. 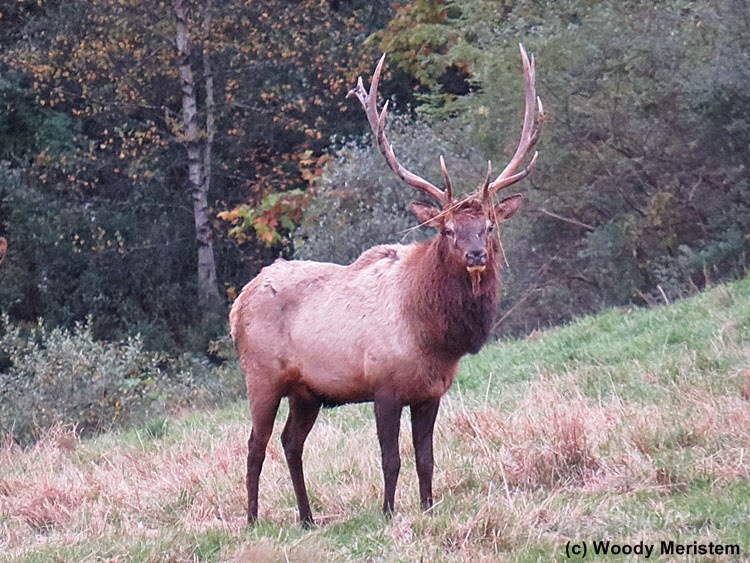 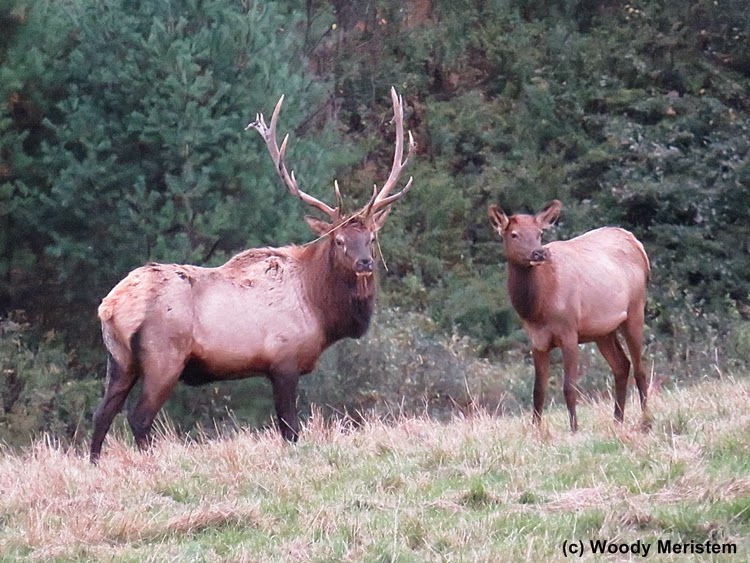 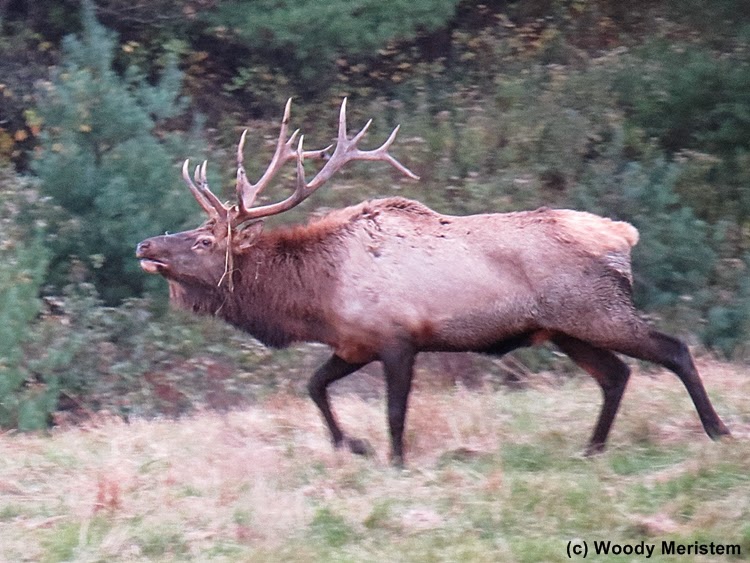 As the light grew dim (almost too dim for photography) on a day that had turned cloudy I headed back to the car for the trip home, another big old bull was continuing to bugle but not chasing any of the nearby cows. 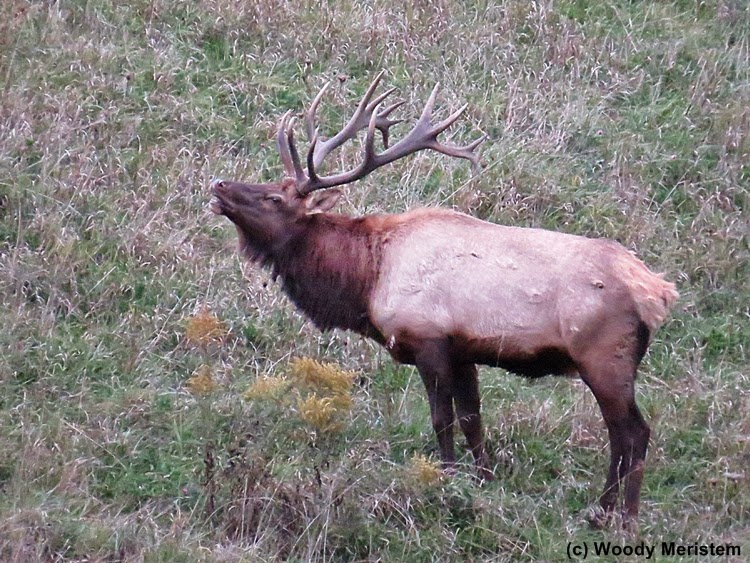 In early November comes elk hunting season for which the Pennsylvania Game Commission has issued 108 licenses. Elk hunting in Pennsylvania has been rather controversial since seasons began in 2001; with some landowners and farmers wanting the population reduced, hunters wanting the opportunity to shoot a trophy and naturalists, elk viewers and photographers wanting the elk to expand their range and an increase in the number of large photogenic bulls.
I’ll return to the elk range in mid-winter to see and photograph the elk again – may they always roam these hills and valleys.
Posted by Woody Meristem at 4:38 AM 5 comments:

As hunting seasons begin and more people are out in the forest, it was time to retrieve my camera traps from the Big Woods. When I checked the memory card that had been in the camera trap overlooking the bear wallow there was a large number of black bear photos. This vernal pool, where the bears come to wallow in the water, is surrounded by a grove of older white oak trees which had a bumper crop of acorns this fall. Bears seeking to put on fat for their winter sleep had been gorging on the acorns and frequently visited the wallow. The camera had gotten bear photos on 12 of 13 consecutive days – a sampling:

Posted by Woody Meristem at 6:40 PM No comments:

On a day in late September I went to Pennsylvania’s elk range in the aptly named Elk County to view and photograph some of the state’s elk herd. There are a number of folks who do the same, several with truly spectacular results. I’ve been spending time seeking and photographing this herd of elk since the mid-1970s when there were less than 70 animals, the few remaining descendants of elk that were released in the area in the 1920s. Now there are about 900 elk in the region, which draw hordes of tourists to the established viewing areas. 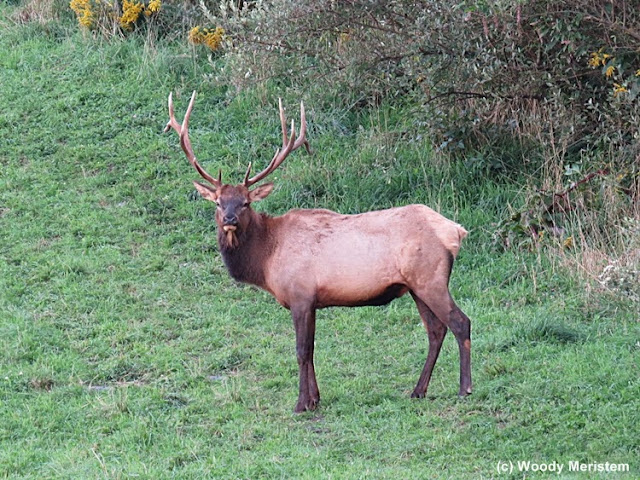 On this morning I got a late start and most of the elk were already in the dense forest where they spend mid-day, so I only saw a few animals. Elk are grazing animals and for most of the year these elk feed in the extensive plots of legumes and grasses that the Pennsylvania Game Commission and the Bureau of Forestry have created in the area. The best viewing and photography opportunities are at some of the food plots far from the established viewing areas, so that’s where I headed late in the afternoon.
By sundown this evening there were over 750 photographs on the camera’s memory card and several videos. Interesting on this day was the bull I call “The Moose” whose left antler is decidedly palmate, but only bears a minimally superficial resemblance to a moose's antlers. He had rounded up a substantial band of cows accompanied by several younger bulls and subsequently lost most of them to another bull
Later, one of the most impressive bulls in the area, also with somewhat atypical antlers,  seemed to be exhausted and had apparently broken an antler tine the previous night  –
Both of these animals are thoroughly habituated to humans, show no fear, and allow a relatively close approach. Unfortunately, because they show no fear of humans, they may not survive the annual elk hunt.