For family, friends, forests and fields may we be ever thankful.


To those of us who live in the United States today is Thanksgiving Day, our friends in Canada celebrated on October 14. In both countries Thanksgiving Day is set not by date, but by the day of the month – in Canada it’s the second Monday in October, in the U.S. it’s the fourth Thursday in November.


In both countries Thanksgiving is a harvest festival exemplified by feasting. Like many people, we have turkey and squash, pies of pumpkin and apples. But it’s the turkey that is so often the symbol and feature of Thanksgiving. So, on this Thanksgiving Day, wild turkeys are featured here – 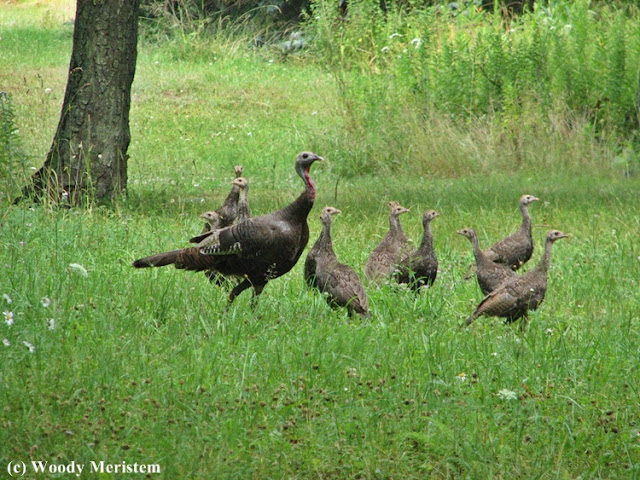 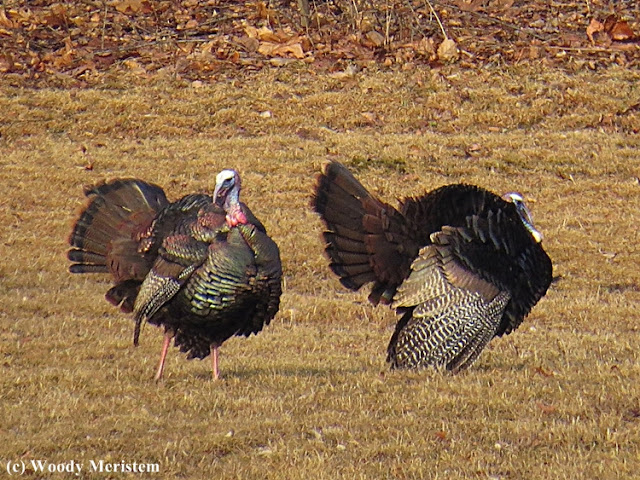 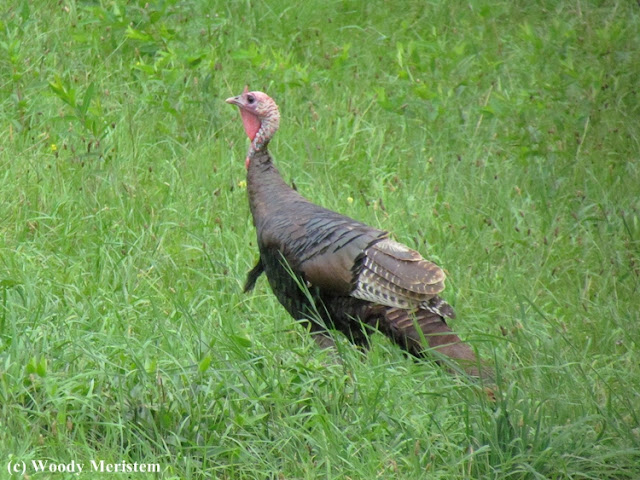 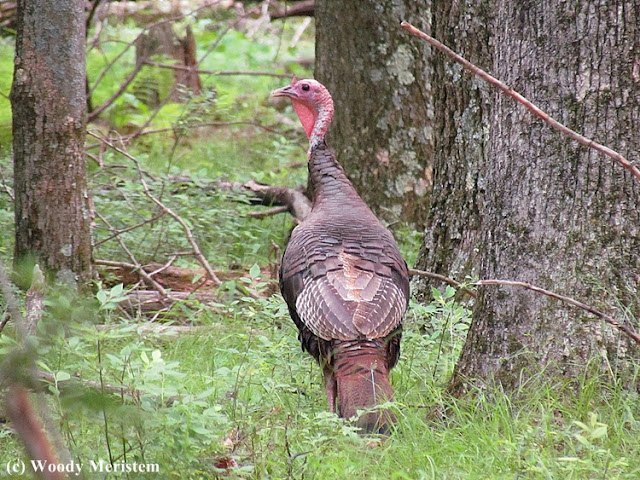 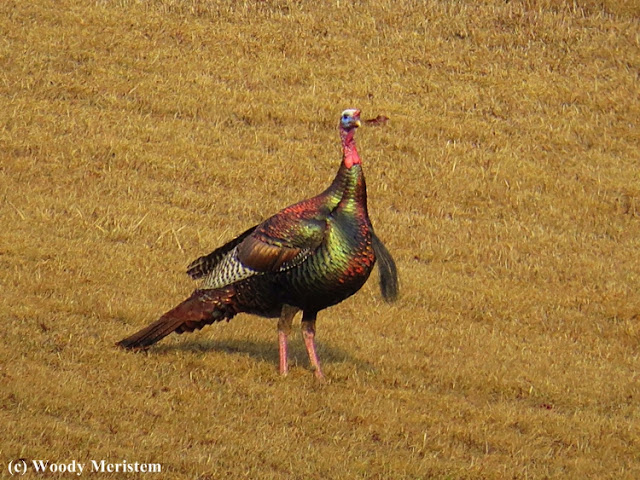 Turkeys are native to the Americas and were unknown in Europe and Asia until early explorers brought them back from their journeys.

Now it's time to enjoy being with our family - and anticipate that roast turkey.

Posted by Woody Meristem at 4:18 AM 3 comments:

Our friends bought an old hill farm when they were married over 50 years ago; at that time it hadn’t been farmed for a number of years. The 1938 aerial photo of the farm shows very few trees other than those in a steep valley along the eastern boundary.


Since active farming ended, trees have grown in a valley on the western part of the property – that valley was the subject of this post.
Although our friends pastured a handful of beef cattle for a few years and cut hay from the fields until 15 years ago, the fields have only been mowed occasionally in recent years.


In the 1938 aerial photo there are a limited number of trees delineating what is now a significant fencerow. It was in that fencerow where I’ve had one or more camera traps at various places over the last few years.

The fencerow is a travel corridor between the wooded valleys to its east and west. 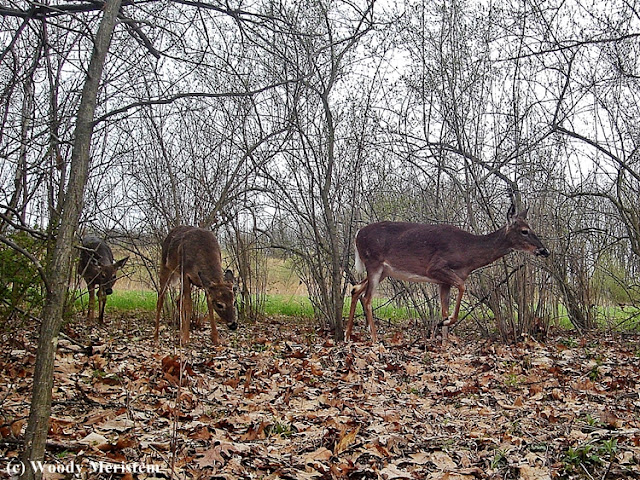 White-tailed deer are frequently caught by the camera traps, second only to the ubiquitous gray squirrels. The second white-tail fawn in the video has an unusual pattern of white spots, with many more spots than most fawns.

Although they are quite capable of doing so, woodchucks seldom climb trees and many people don't realize that they do. Speaking of climbing trees, gray fox are quite cat-like in their ability to climb and often prey on roosting birds at night. No other North American canine is capable of ascending vertical trees although red fox and coyotes often travel along fallen logs.
Posted by Woody Meristem at 4:49 AM 7 comments:

As I drove down a country road there it was, a plant I’d been seeking out for five years, a plant I’ve only seen twice before in our area. The leaves have fallen now but the bright pink and red fruit stood out in the drab landscape on a cloudy day. The plant was a shrub, by far the largest of the three I’ve been fortunate enough to find. It was an eastern wahoo. 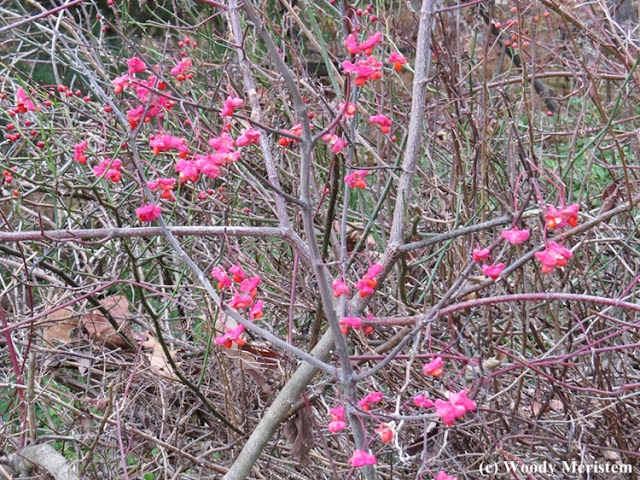 Many years ago I saw a single stem of the plant bearing fruit on one of the nearby State Game Lands. But the spot where it grew was impacted by a tornado in 1985 and the shrub could never be found again, perhaps because white-tailed deer are known to browse the stems.


More recently there was a small cluster of fruit-bearing stems in the roadside hedgerow of an agricultural area. But, those plants also disappeared when the hedgerow was removed.


This time it was a number of large plants growing near the road in an area of abandoned farms gradually reverting to forest. There were 25-30 stems along the top of the roadbank; the tallest almost ten feet in height.


What caught my eye was the abundance of fruit, those colorful, oddly shaped open capsules from which dangled one or more bright reddish-orange berry-like fruits – 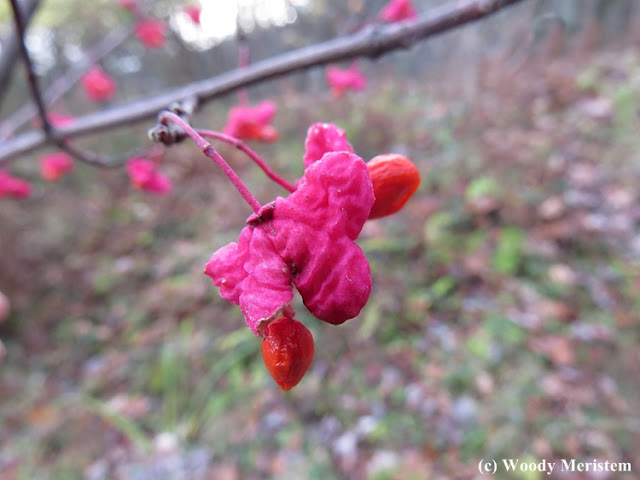 Eastern wahoo is a plant of the Midwestern states with, apparently, a very limited range in Pennsylvania, primarily in the southern and western counties. But, here it was adding to the list of species I’ve photographed in northcentral Pennsylvania; here it was, adding a bit of color to the late fall landscape – 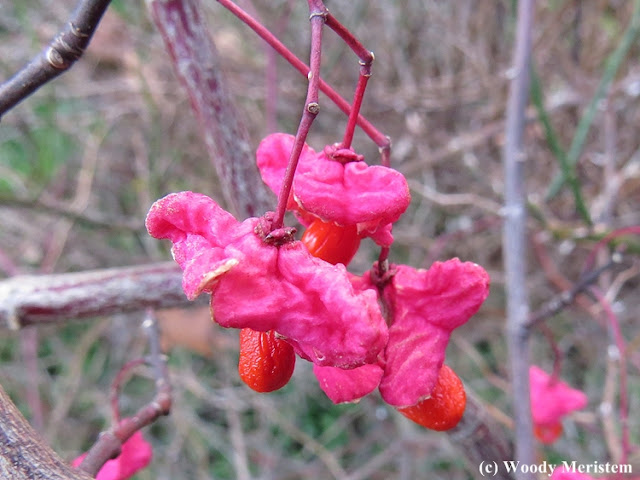 Eastern wahoo has a number of common names; the most colorful being “Hearts Bursting with Love” – how appropriate for a plant that many would love to have growing in their gardens.
Posted by Woody Meristem at 1:59 PM 4 comments: