Years ago the pumpkins we used as fall decorations were thrown in the compost bin where they were soon opened and the interior, including all the seeds, eaten. As many people know, white-tailed deer really enjoy eating pumpkins and it was apparent that deer were the cause of this pumpkin destruction.

White-tailed deer do not have upper incisors and presumably have a fairly difficult time getting through the outer rind on a pumpkin. More recently I’ve saved the deer the trouble of opening the pumpkins by smashing them on a large rock in the yard. 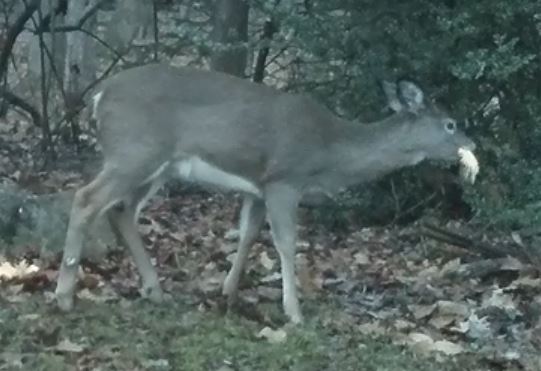 Although the deer occasionally come to eat pumpkin during the day, they usually don’t arrive until after dark and leave before dawn. We were curious about how much time they spent munching away as well as how some pieces of pumpkin wound up far from the rock where they were opened. So a camera trap was mounted on a tree in the yard to watch the goings-on.

In four days the camera took several hundred video clips (of which you've seen but a few) before the pumpkins were completely gone.

From the videos it became apparent that the deer first ate the seeds; they then used their lower incisors to scrape off the soft pulp, much as we use a spoon to scrape the pulp from a pumpkin when making a jack-o-lantern, and ate that. They then did the same with most of the "meat" of the pumpkin, and finally they ate the tough outer rind by shaking the large pieces to tear off smaller pieces. Some pieces of the shaken pumpkins were flung 10-15 feet.

Obviously we humans aren’t the only ones who enjoy pumpkin in the fall – but ours is baked in a crust and topped with whipped cream.

We put our pumpkin in an enclosed compost bin. Noticed something is eating it in there but must be something small to fit through the small cracks. Didn't know that deer liked it.

I love giving the deer the pumpkins!
The big male bashes it with his hoof! They take a bite, hang on, and flip it up. The weight of it bashes it.

Hello,
What a great video, awesome captures of your pumpkin eaters. The males are handsome. Thank you for linking up and sharing your post. Take care, have a happy weekend!

We've seen a few pumpkins at one of the trailheads this week. I guess someone left them for the critters. Good to know....I learned something today! heehee!

Nice video. I'm pretty sure that if you offered a pumpkin pie with whipped cream to a deer, it would eat it too. We camped out long ago and while sleeping, the deer moved in and found where we kept our cherry turnovers. In the morning we found they devoured them all leaving quite a mess behind. One could only laugh and clean it all up.

Hi! I have been following your blog for about a year now and I recently got inspired to make my own, that is similar. Here is the link: https://framinghamwildlifeblog.blogspot.com/
It focuses on the nature and wildlife of massachusetts, where I live.