More from the Bear Wallow

For most of the summer and fall I've had a camera trap that takes videos at a seasonal (vernal) pool in the Big Woods. Results from earlier in the year were posted here and here.

As the water level in the seasonal pool had risen wildlife activity declined and it required wading to check the card and change the batteries. The camera was but an inch or so above the water and only viewing a small area of the pool’s greatly enlarged area.

So the camera was moved to one end of the oblong pool and attached to a small tree well above the water level. After two months of on-and-off rain the water level still hadn’t dropped and wildlife activity hadn’t increased significantly – but deer and bear continued to visit occasionally and the camera captured several videos –


Now it was time to remove the camera before hunting seasons began and more people were in the forest.

When I checked the camera it was twisted around the tree to face away from the pool and the front cover of the security box was gone – but the camera was undamaged except for a tooth mark in the Fresnel lens.
The front cover was discovered beneath the water in the pool, but the padlock was nowhere to be found. I used my alpenstock to retrieve the cover, which was bent and twisted, but wasn’t beyond repair. As for how the lock failed and where it was –

Bill had never seen elk in Pennsylvania, so he and I headed west on a day with a stiff breeze. We’d left early and saw elk before the sun was above the horizon, a small band of cows bedded down in a field with a bull feeding where the field met forest. It was too dark for photos, but Bill did get to see his first Pennsylvania elk. 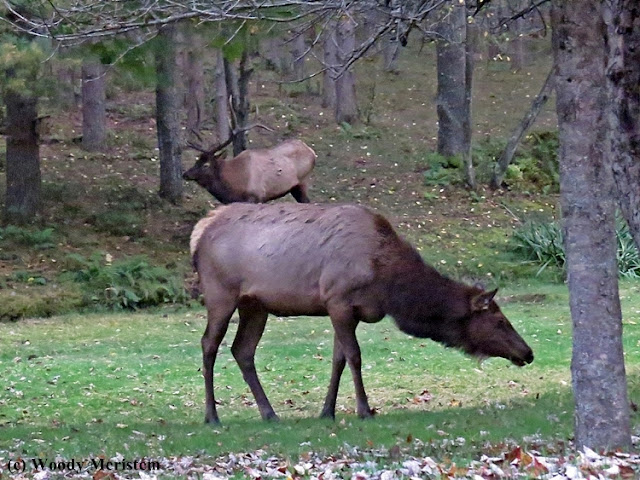 Moments later we got a better look at the bull – 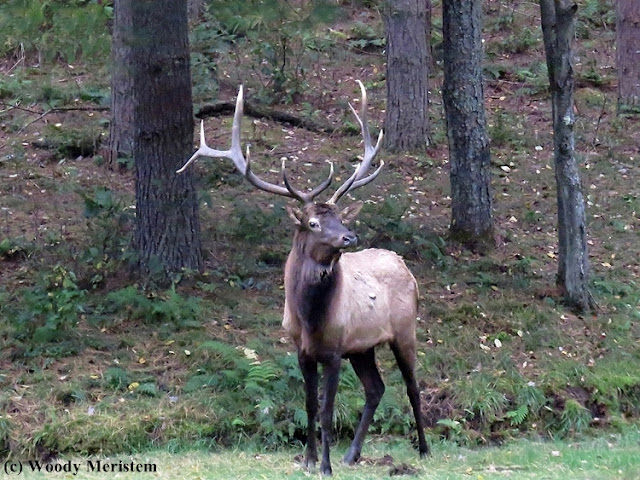 The Woodring Farm is an old hill farm that is now owned by the Pennsylvania Game Commission and managed as elk habitat. (More information on the Woodring Farm is in this post.) Bill and I walked to an upper field on the farm where we (and a number of other elk viewers) found two young bull elk bedded in the field – 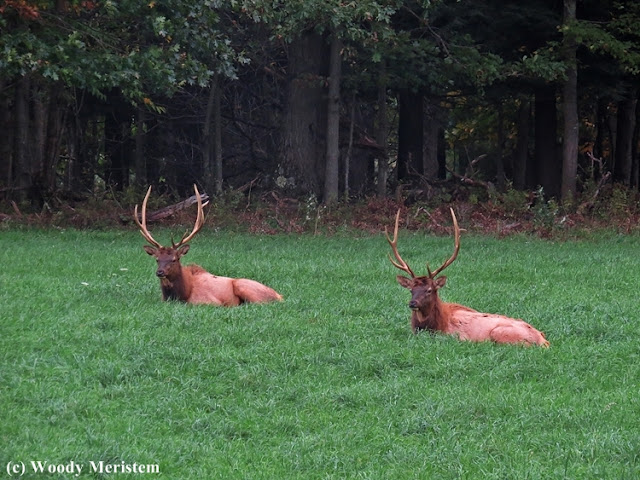 These bulls are habituated to humans; as long as no one enters their flight zone they behave quite naturally – 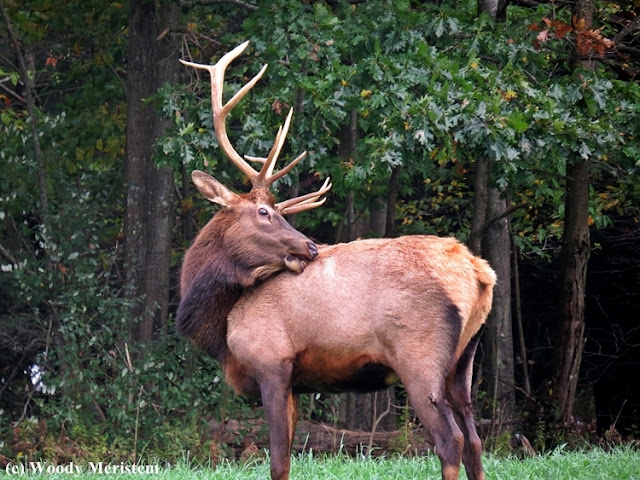 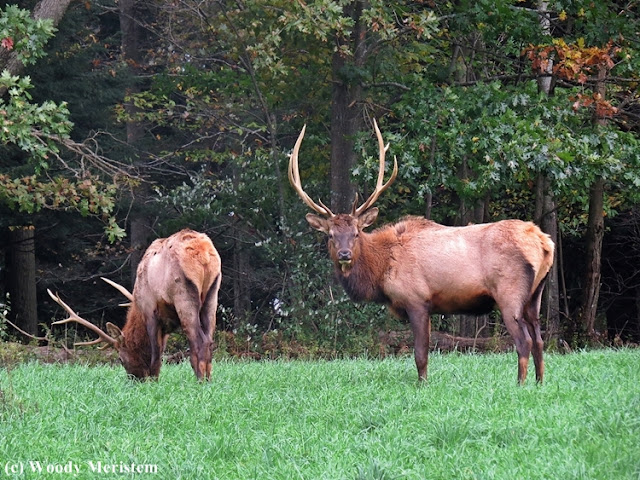 As a few people moved closer, the young bulls alerted but relaxed again as the people left. 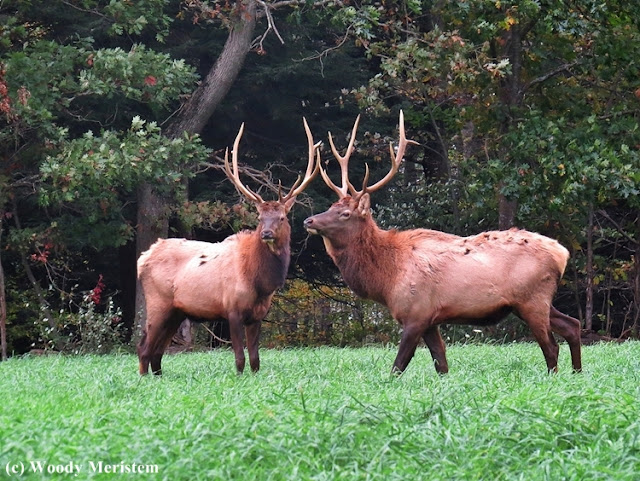 The young bull was apparently startled into flight by the approach of a much larger bull that was said to be in the forest – unfortunately we never saw that large bull.


It was almost dark when we found a band of cows and calves with a bull in attendance. He was larger than the two young bulls we had seen earlier but still not as impressive as some of the bulls that were found in the area in years past. 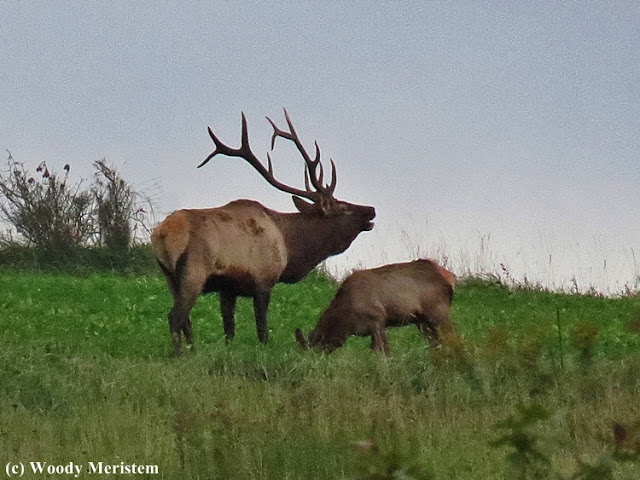 The advent of a hunting season for elk in Pennsylvania and the targeting of the larger/older bulls by those providing guide services for hunters has reduced the opportunities for elk viewers and photographers to enjoy those older animals.


The consensus among elk photographers, especially the “regulars”, is that the low pregnancy rate (50-60%) among elk cows is due to the elimination of what would be the most dominant bulls. Therefore the breeding is being done by inexperienced young bulls that are spending excessive amounts of time trying to exert dominance over their fellows and not enough time attending to receptive females.


There may be another factor, or combination of factors, for the low pregnancy rate of Pennsylvania elk. The Game Commission is trying to determine the reason, but if it is connected to the hunting season we may never know unless hunting is curtailed.
Posted by Woody Meristem at 3:20 AM 6 comments:

It’s fall and beneath some of the smaller American beech in the Big Woods is a black or dark gray mess. 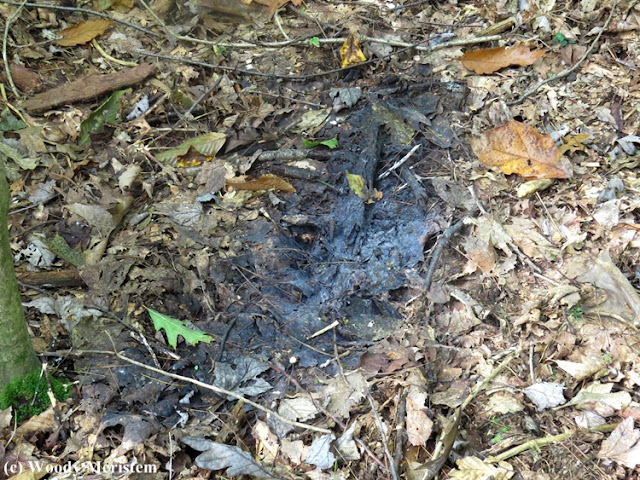 The mess is honeydew, the sugar-filled waste of insects. Large quantities of honeydew drip to the ground and provide food for a sooty mold fungus which covers the honeydew.

That stuff is worth investigating, not necessarily by examining it closely, but by looking up. Above you will find small branches or twigs covered with what, at first glance, looks like snow.

But snow it’s not, instead that “snow” is actually a mass of insects, small white insects. 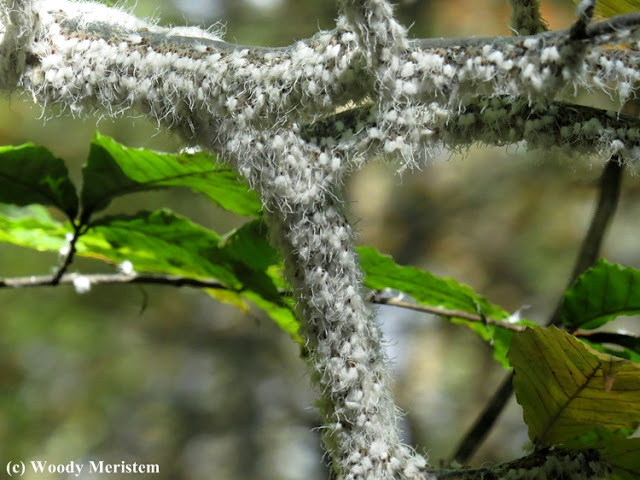 Those are beech blight aphids (Grylloprociphilus imbricator) that feed on the sap of American beech trees by piercing the thin bark on twigs and small branches with their piercing-sucking mouthparts. The common name of “beech blight aphid” is a poor choice of name; beech trees have been dying for decades from what some people call "beech blight" which is actually an insect/fungus combination – but not this one. The beech blight aphid does not kill trees, it doesn't even do significant damage to the trees.

The aphids exude long white waxy strands from their abdomens, those strands make a mass of these insects quite noticeable. 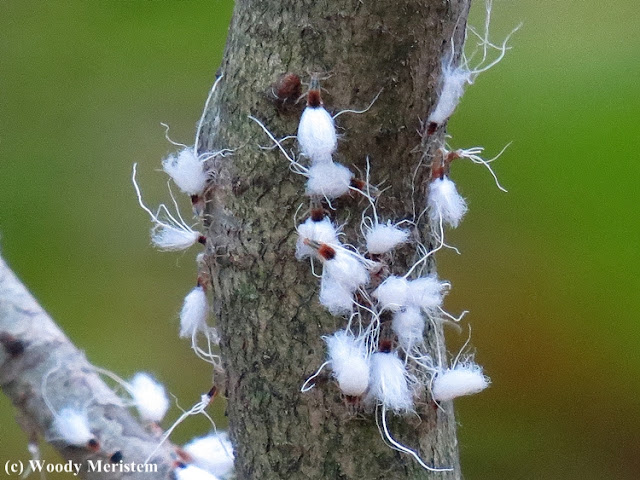 Whenever the aphids are threatened, either by a predator or a photographer, they raise their abdomens and wave from side to side, frequently quite rapidly, shaking the waxy strands. For that reason they’re often called the boogie-woogie aphid –

The aphids don’t rely on the waving to deter the threat, instead it’s used to disperse a warning scent to their fellow aphids. The aphids are quite aggressive, a number of them will swarm the threat and stab it with their piercing/sucking mouthparts which frequently drives off a potential predator. 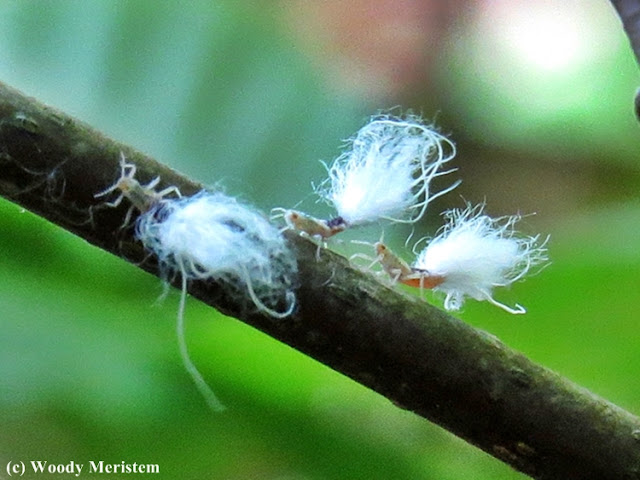 Posted by Woody Meristem at 4:53 AM 7 comments: