The first clue was a feather in a ski track on the old road. The feather could have been easy to ignore because birds lose feathers for many different reasons – 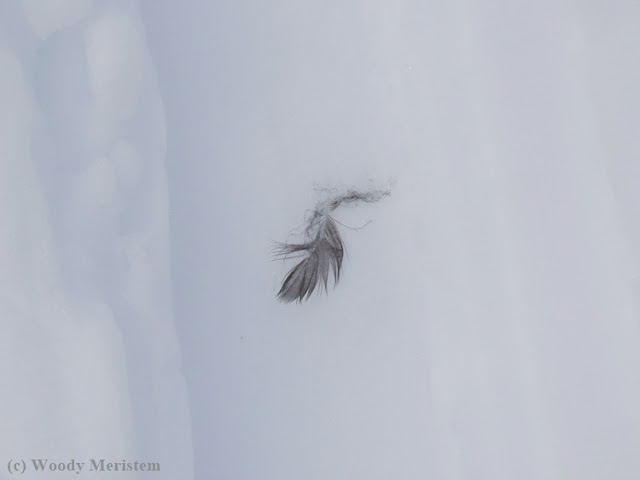 A short distance further along, the road passes an old borrow pit where fill material had been removed in the past; in the middle of the clearing in the Big Woods formed by the borrow pit was a large mass of feathers – 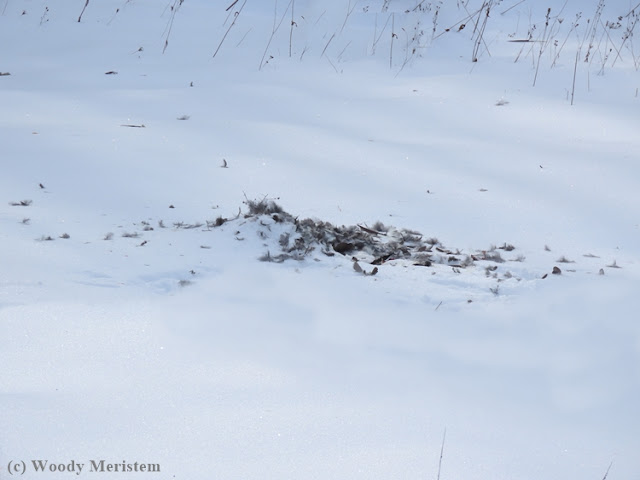 For a life-long nature snooper this called for an investigation. There were no tracks on the snow-covered ground that led to the pile of feathers, at least there weren’t until I walked over to take a better look and left my own tracks there.

Here's a closer look at the feathers which were on and around a slightly elevated mound. The mound is a clue to the killer's identity – 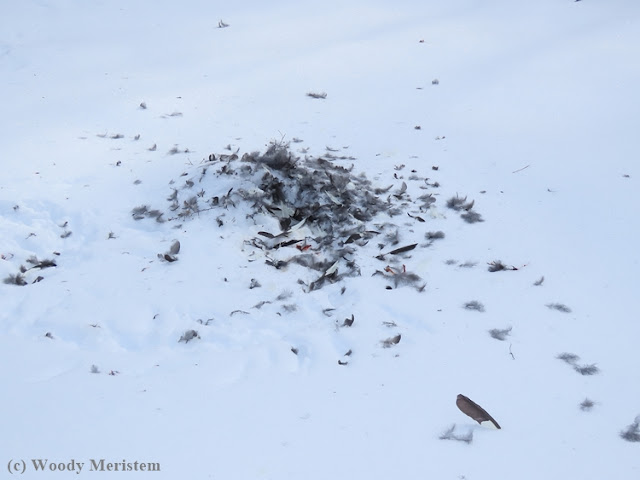 To set the stage a bit:

The ground had been bare in the Big Woods, but beginning the afternoon of the 16th through the morning of the 17th the Big Woods received 22-24 inches of snow. The following days were cold, but the 22nd was much warmer; between the snow compacting, sublimating and melting there was only about nine inches on the ground on the 23rd when I found the feathers.

The feathers were the key to the identity of the deceased, there were some red feathers – 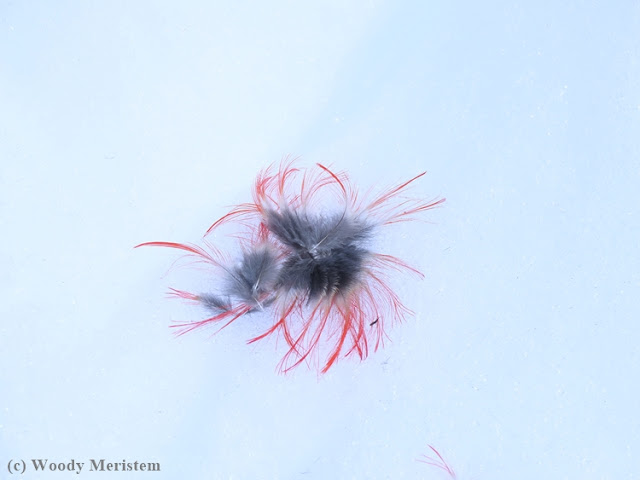 And scattered primary feathers from the wings – 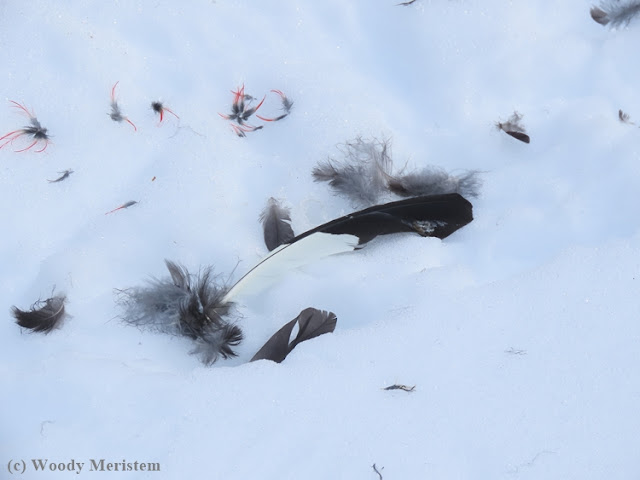 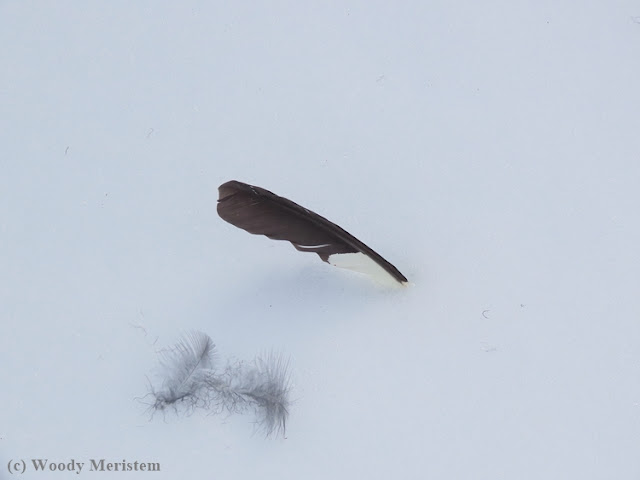 The primary feathers were the key to determining that the deceased was a pileated woodpecker, age and sex undetermined.

A lot of feathers were on top of the snow and apparently none were below the surface. So, the death must have occurred after it stopped snowing on the 17th, but that didn’t tell us much. On the 20th there was a fine dusting of snow, but there was no snow on top of the feathers. The temperature was barely above freezing until the afternoon of the 22nd, when it was partly sunny and in the mid-40s for several hours, a few of the black feathers had sunk a short way into the snow or settled into old depressions. 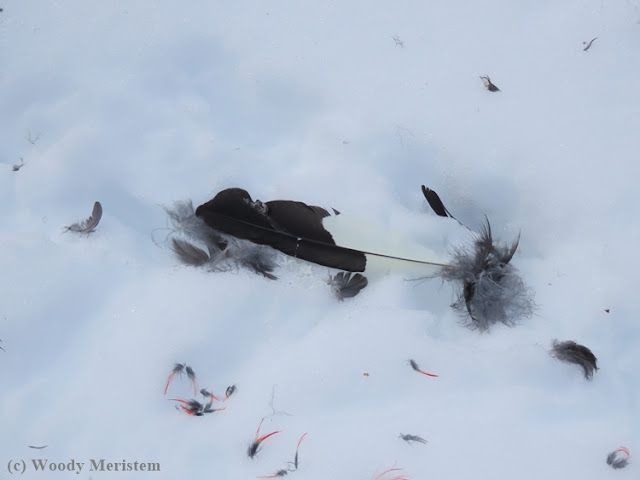 The night of the 22nd was below freezing and the snow had a slight crust into which some of the feathers had lightly frozen. So, it appears that the deed was done early on the 22nd.

Now we’ve determined the identity of the deceased and the date and time of death, it just remains to identify the killer. In several areas around the pile of feathers there were wing marks in the snow – Those wing marks narrow it down to an aerial predator – a hawk or an owl. Pileated woodpeckers aren’t nocturnal; in fact, like all woodpeckers, they spend nights in a tree cavity. That reduces the odds of the killer being an owl as does the large quantity of feathers removed after the woodpecker was killed, owls usually only remove the largest feathers before dining – 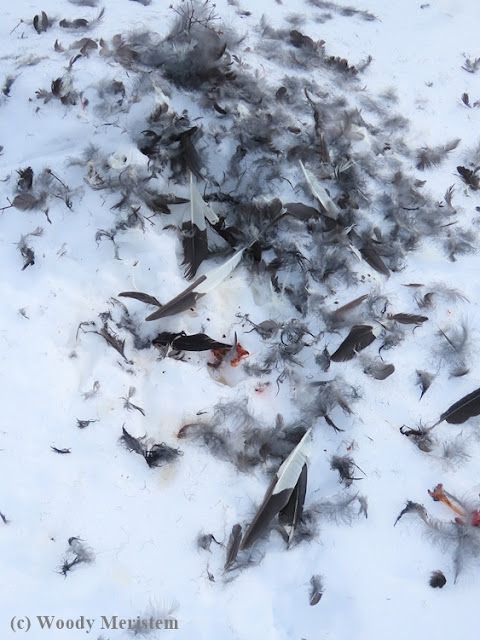 So the killer was almost certainly a hawk that caught the woodpecker as it was flying across the clearing. It probably wasn't a red-tailed hawk nor a red-shouldered hawk since neither is fast or agile enough to easily catch a woodpecker in flight. That leaves us with either a goshawk or perhaps a very large Coopers hawk as the probable killer. Since goshawks have nested in the surrounding forest and the smaller Coopers hawk would be less likely to attack a bird as large as a pileated woodpecker, the deed was probably done by a goshawk. Goshawks, like this immature, are the largest of the bird-eating hawks, the Accipiters – 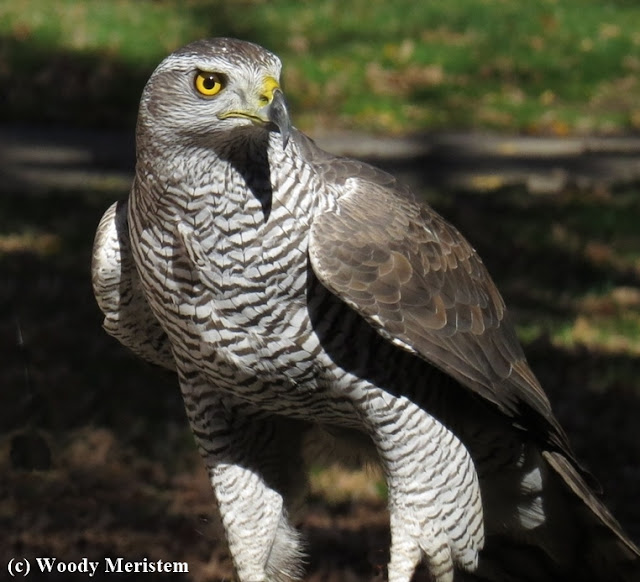 Accipiters are fast and agile and like to carry their prey to an elevated perch (remember the slight mound?). Similarly, the crow-sized pileated woodpecker is the largest of the North American woodpeckers – 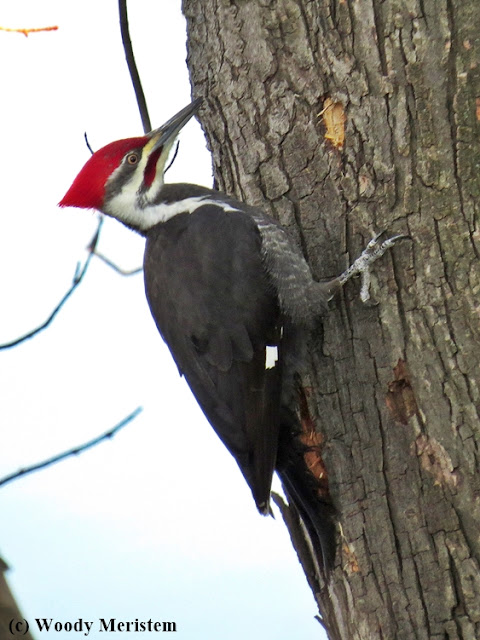 Thus we can deduce the probable identities of the protagonists in this woodland drama. This is not a mystery worthy of Sherlock Holmes nor is it a murder mystery, it’s not even the story of a crime – it’s just how a pileated woodpecker died and a hawk got a meal.

Note – Predators are not “vicious”, “cruel”, “bloodthirsty” or any of the similar adjectives that have been applied to them over the centuries. They are no different than the robin eating the earthworm, the warbler eating the caterpillar nor those of us who enjoy a turkey dinner on Thanksgiving Day. They’re doing what they evolved to do and could no more change how they obtain a meal than we could stop the ocean’s tides.

Northcentral Pennsylvania has no reindeer for Santa, no caribou either, but we do have white-tailed deer. White-tails are major ecological, recreational and economic factors here; and deer hunting is so ingrained that, even in normal times, many schools were closed on the first day of firearms deer season.

Deer hunting season in Pennsylvania is now essentially over. Although there are still opportunities for bow hunters and those who use muzzleloading firearms, by far the greatest number of white-tailed deer to be killed by hunters in 2020 are already in the freezers or at the taxidermists. Most of those hunters would prefer to shoot a buck rather than what is euphemistically called an antlerless deer; that’s almost certainly a desire for a trophy combined with a cultural artifact from the days when only antlered bucks were legal.

Traditional deer season may be over, but there are still lots of deer out there in forest and field – including a lot of bucks. The camera traps out back, on the hill above the house, captured videos of bucks that are still roaming forest and field. Here are some of those bucks in our little corner of the world –

We’ve not seen any of the bucks in the daylight and the only clue we have to their presence is a small tree about 50 feet from the house that a buck soundly thrashed one night. Without the camera traps we wouldn’t know the bucks had been here. They’re here to visit these winsome ladies –

There’s a good chance that most of the bucks have home ranges some distance away and most have returned to their usual haunts or will return there over the next few weeks.

Meanwhile on the Rim

Time flies when you're having fun – and when you're a naturalist any day outdoors can be an enjoyable day, even when it's cold and raining or hot and humid. And if you're a photographer as well, any day outdoors is a chance for a good, rarely a great, photograph. So I spend at least part of each day outdoors wandering forest and field to see what I can see and occasionally doing a bit of research.

Lucky guy? Yes, and for that I feel grateful and somewhat guilty; but the ability to do that is because of decisions I made when I was 17 and 18. Decisions and/or mistakes made as teenagers frequently impact our entire lives for good or ill.

Enough philosophy and reflecting. Meanwhile, on the rim my trail camera went about it's quiet business of recording videos of the birds and mammals that followed the wildlife trail along the rim of the Allegheny Plateau during the summer and fall –

The camera on the rim is in a spot that few humans ever go, it can stay there through hot humid summers, hunting seasons and the cold and snow of winter just quietly doing its thing – taking videos of wildlife.
Posted by Woody Meristem at 12:22 PM 6 comments:

The Sky On His Back

“The bluebird carries the sky on his back.” So wrote Henry David Thoreau, the 19th Century writer, naturalist and philosopher. He was writing about the eastern bluebird that was a common resident of the fencerows and forest edges that were abundant on the 19th century farms that were so familiar to Thoreau. 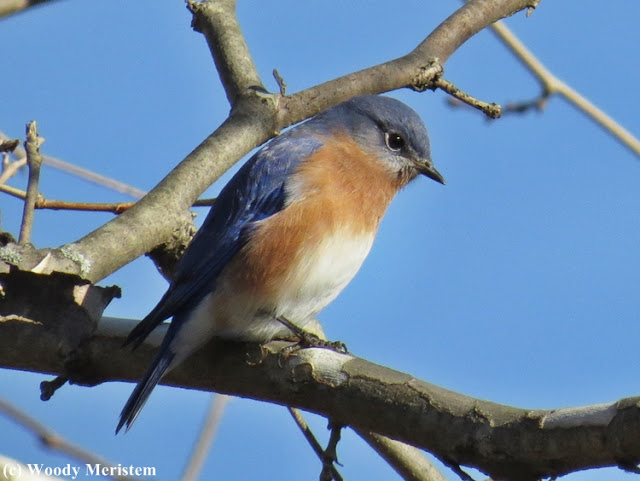 But then came mechanized agriculture and the U.S. Department of Agriculture’s cost-sharing programs of the mid-20th century that reimbursed farmers for most of the cost of removing those fencerows to improve efficiency.


So much for the abundance of bluebirds as their nesting and roosting places in the fencerows, hollow trees and rotten fenceposts were eliminated. 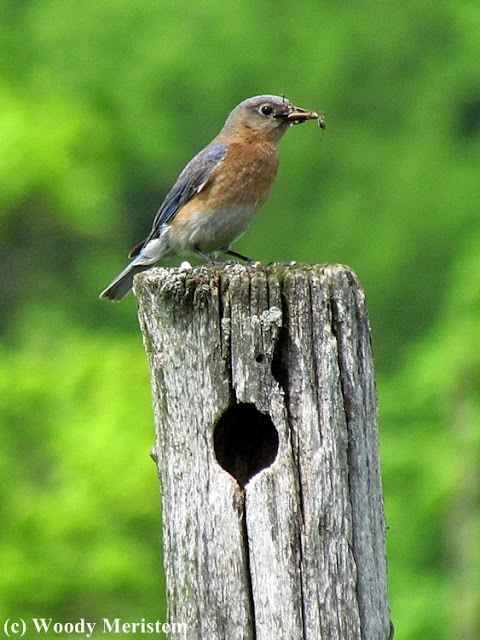 When I was a boy, eastern bluebirds were few and far between and seeing one was a treat of the first magnitude. About that time bluebird trails were being created as landowners and others interested in bluebirds installed large numbers of suitable nest boxes – 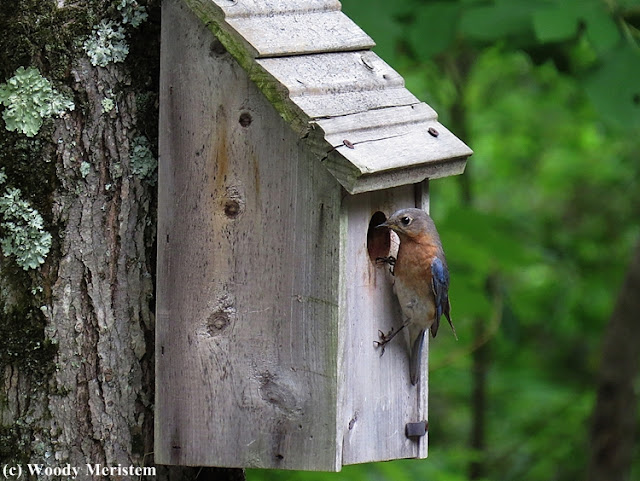 Now, bluebirds are back in appreciable numbers – and much of the increase in numbers is attributable to the folks who installed and maintained those nest boxes – 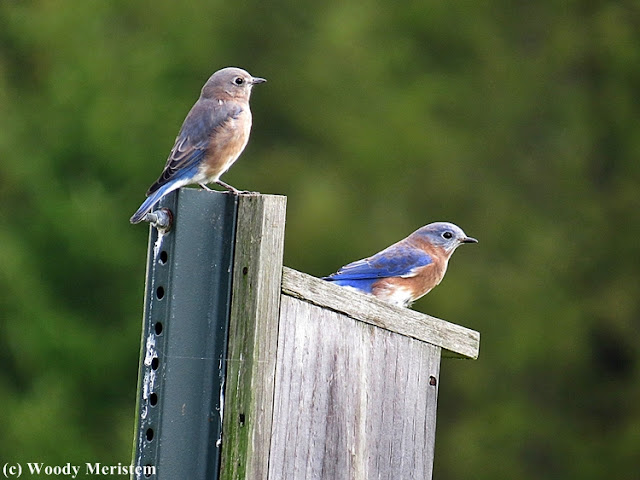 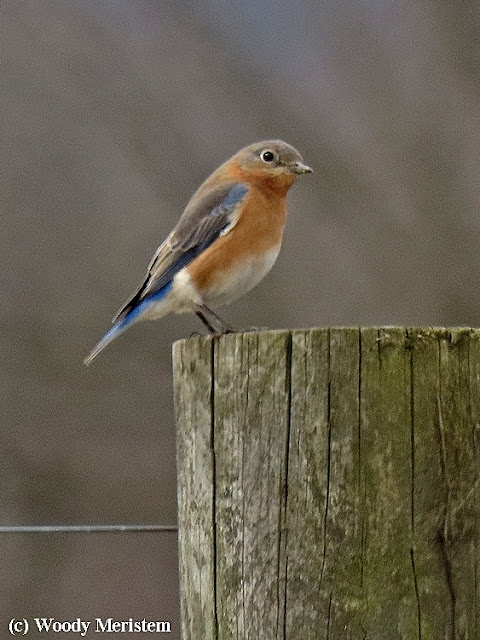 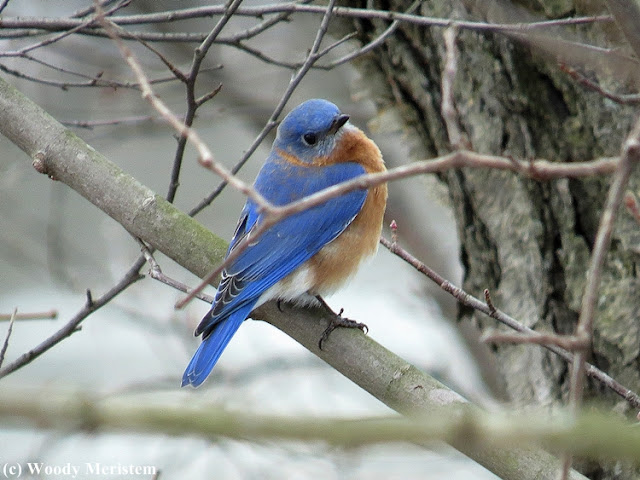 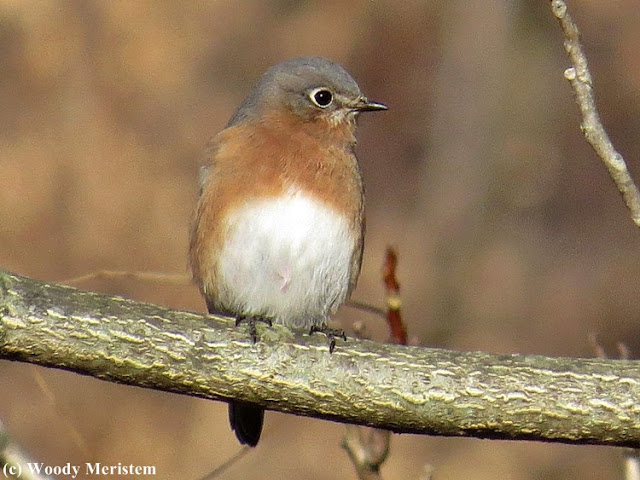 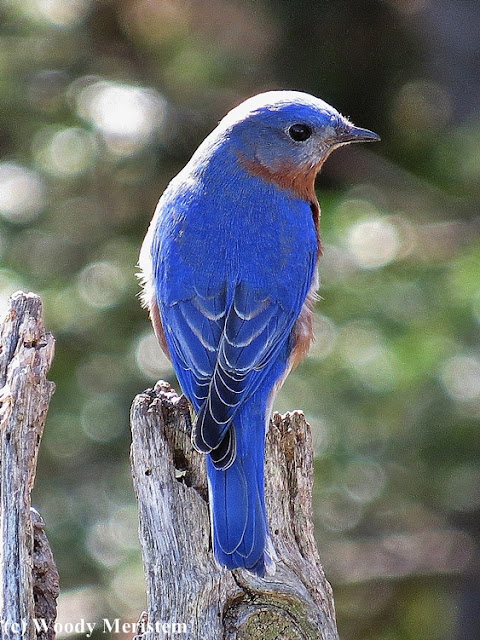 With the warmer winters brought about by the changing climate, many bluebirds are spending the winter in northcentral Pennsylvania where they feed on fruit remaining on trees and shrubs. 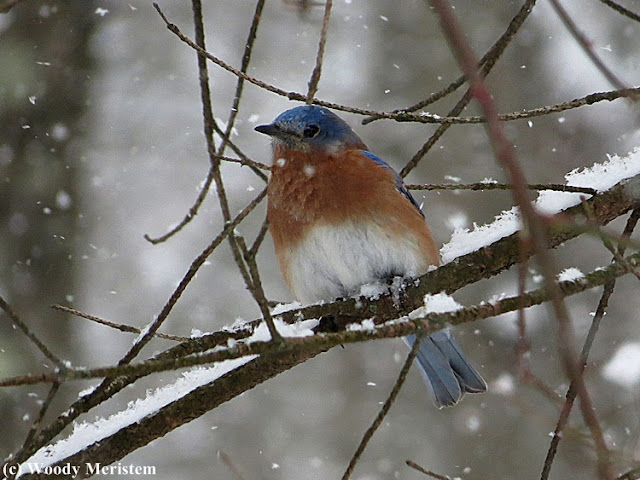 The resurgence of the eastern bluebird population is one of the conservation success stories of the last 60 years.
Posted by Woody Meristem at 11:40 AM 8 comments: