July 2022 in northcentral Pennsylvania was hot and very dry with daily high temperatures in the upper 80s and lower 90s and very little rain. In most places there wasn’t much wildlife activity to be seen, although as many intermittent streams dried up some wildlife was forced to travel in search of water.

The running log straddles an old road that descends a forested hillside from a field reverting to woodland into a small valley with a trickle of a stream.

In early August when the videos from the camera trap at the log were downloaded the numbers and variety of wildlife were both surprising. 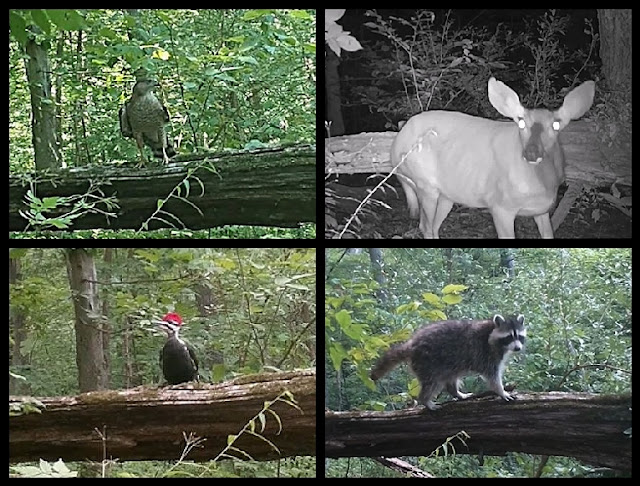 I tend to keep camera traps in each location for several years since a short-term session won’t detect the many species that may use a specific habitat. By the same token, species that appear in the early videos may not ever appear again or might only pass by on rare occasions.

Posted by Woody Meristem at 8:59 AM

Amazing what you find with these long term trailcams!

That is an amazing collection of critters!

Hello,
What an awesome critter post, a nice variety of critters.
Thank you for linking up and sharing your post. Take care, have a happy weekend.

You have the best log for critters and birds! I would have never imagined seeing so much variety. I like that funny porcupine, probably because I've only seen one in the wild years ago!

Stunning. I know just where a camera would be good on my land, if I can find somebody to put it up. The fisher was the one that startled me. I just assumed it was a more northern animal. It gave me the shivers. I've had them walk around my house, as if scoping us out. Had one try to get in through a screen once. I'm glad that lately I don't seem to live in a fisher cat territory.

Unless you're a porcupine, a white-footed mouse or a squirrel you have nothing to fear from a fisher. Anyone who says otherwise is only repeating a myth. Fishers are no larger than a big house cat -- speaking of cats, fishers are NOT a species of cat, they're weasels related to mink and river otters and shouldn't be called "fisher cats".