On maps it's shown as a bog, but it’s not actually a bog. True bogs don’t have an inlet or an outlet through which water flows in or out. Bogs receive only rainfall and surface water and are normally quite acidic – and they lose water through evaporation or the transpiration of the bog’s plants. Bogs are acidic and low in fertility.

Fens, on the other hand, receive groundwater and usually have both an inlet and outlet; since fens’ water is derived from groundwater, they have more available nutrients than bogs; and although they may be acidic, fens are often neutral or basic. While bogs are almost always on level ground, fens are on a slope, although the slope may be extremely slight.

While bogs are home to an interesting variety of vegetation, fens frequently have a very rich array of plants, including orchids.

On a summer day I headed for one of my favorite fens, one that’s not too far away. I parked at an old logging camp and then headed for the fen; first through a thin border of tall white pine, then through thick alders with a groundcover of cinnamon fern where I sank to my knees in water and muck, and finally into the open portion of the fen. 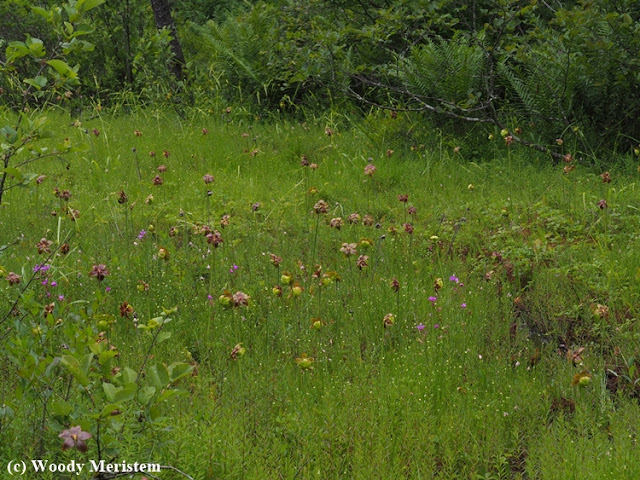 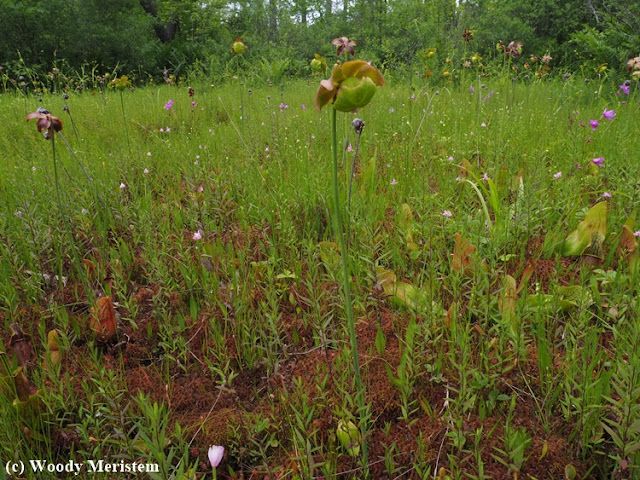 In those photographs you get a glimpse of several of the most interesting plants in this fen. The tall stalks with the reddish top-knot are the flowers of northern pitcher plant – 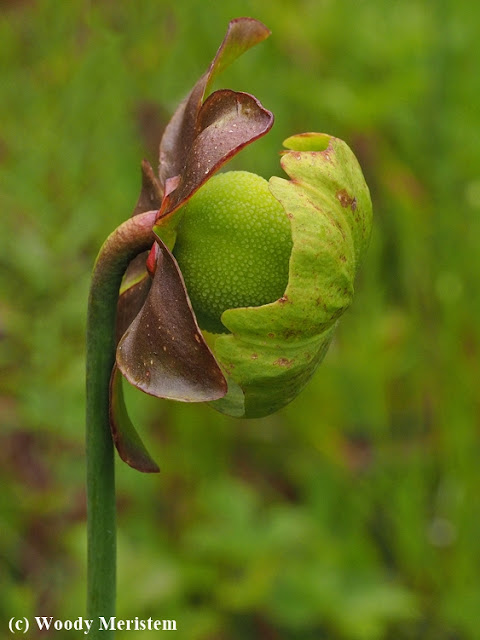 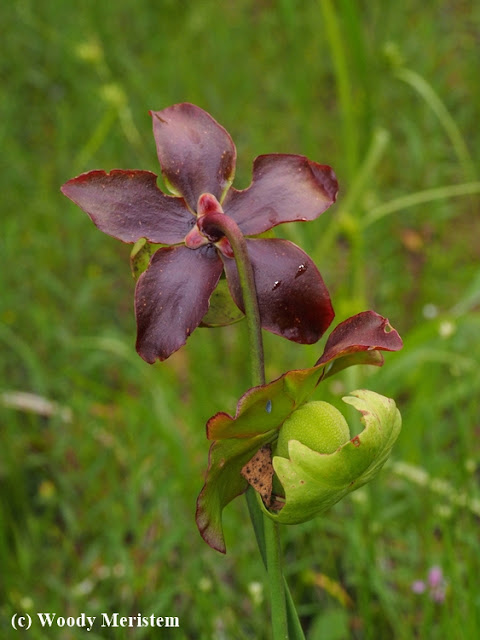 Below those are the pitcher plant’s leaves: tubular vase-like structures filled with fluid – 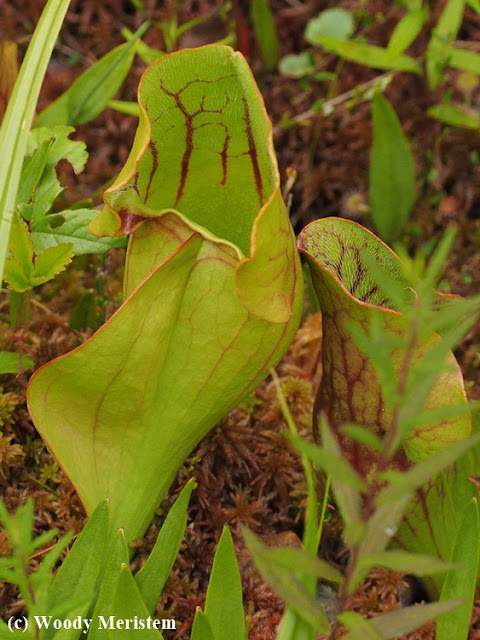 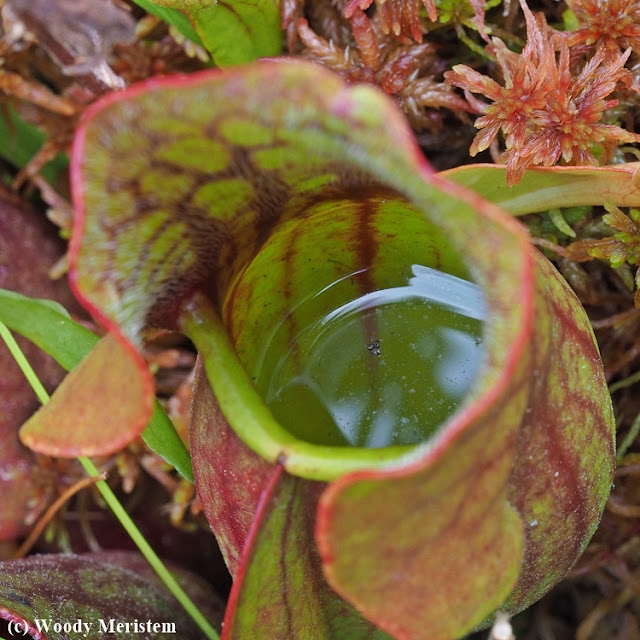 Insects that enter the “pitchers” are trapped by small downward pointing "hairs"and then dissolved, supplying the plant with nutrients lacking in the fen.

The other carnivorous plant in this fen is the tiny round-leaved sundew. Seeing the sundew requires getting on bent knee, looking closely, and there it is – a rosette of small round leaves bearing, on short stalks, droplets of sticky fluid. Insects alighting on the leaves become trapped in the fluid and the leaf curls around to dissolve the insect so the plant can acquire its nutrients – 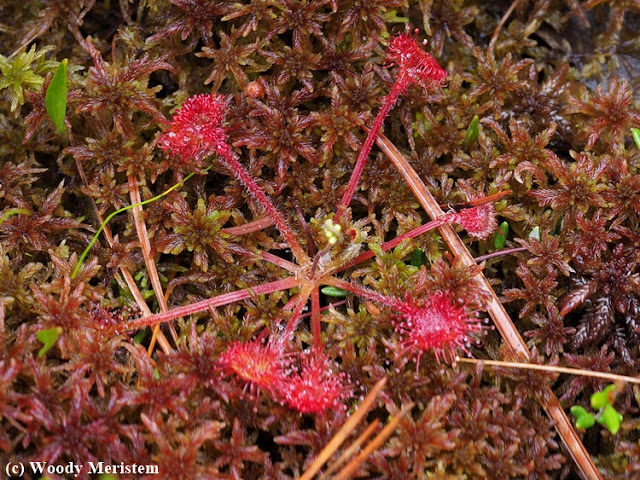 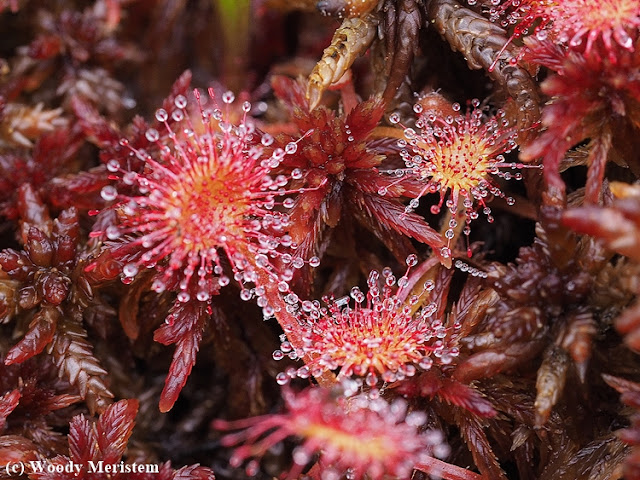 Now for those spots of pink in the first photo – they’re two species of native orchids. The taller, bearing the larger flowers is calopogon, also known as grass pink – 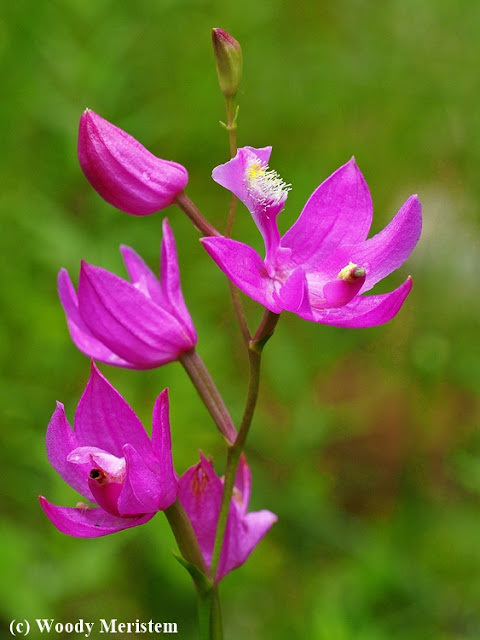 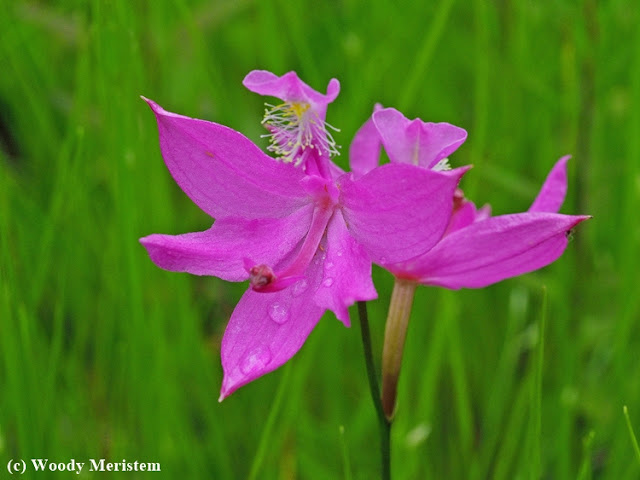 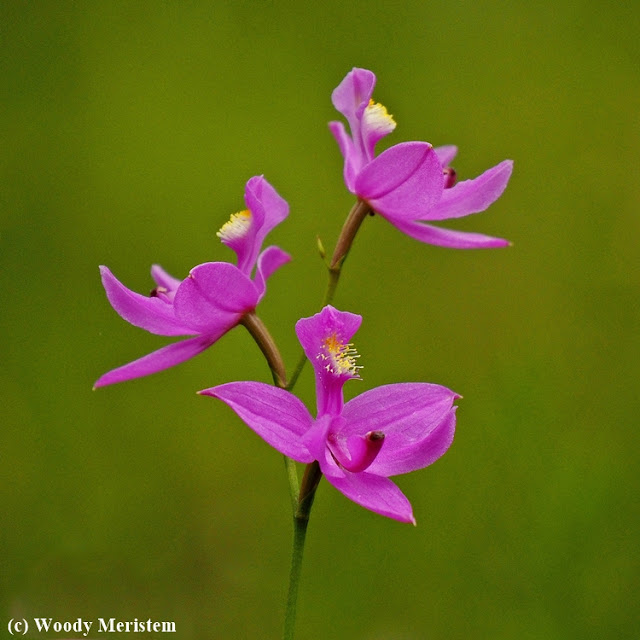 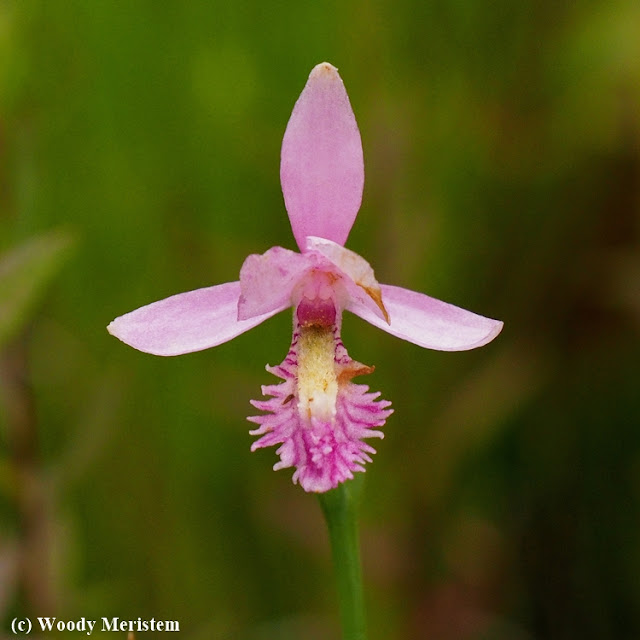 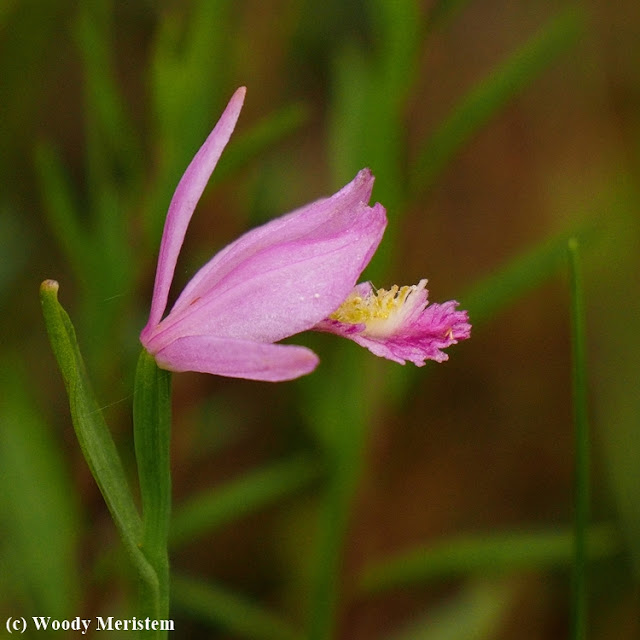 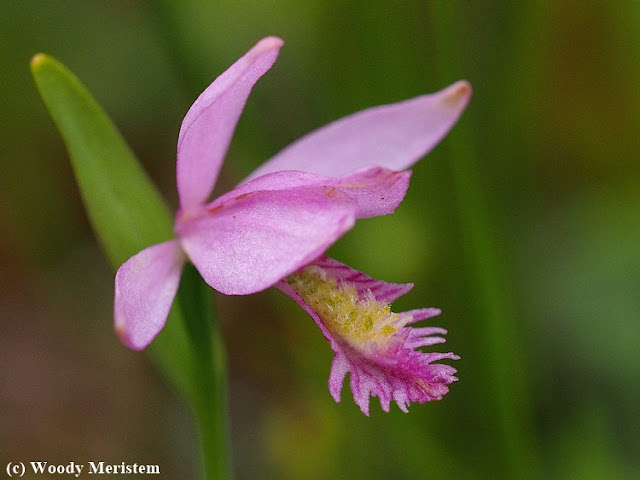 Not in bloom was another plant only found in fens and bogs, the creeping snowberry. Creeping snowberry is related to blueberry and mountain laurel but it doesn’t grow taller than an inch or two – 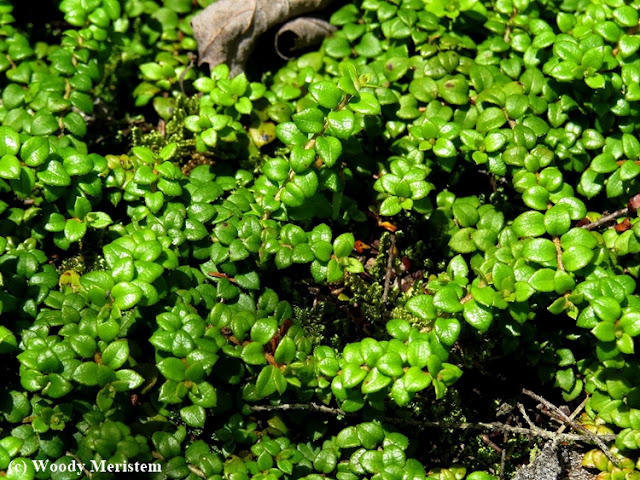 I’d expected to find each of those plants, what I didn't expect and was very pleased to find were several small butterflies visiting the flowers. They turned out to be a species confined to similar sites, known as the bog copper – 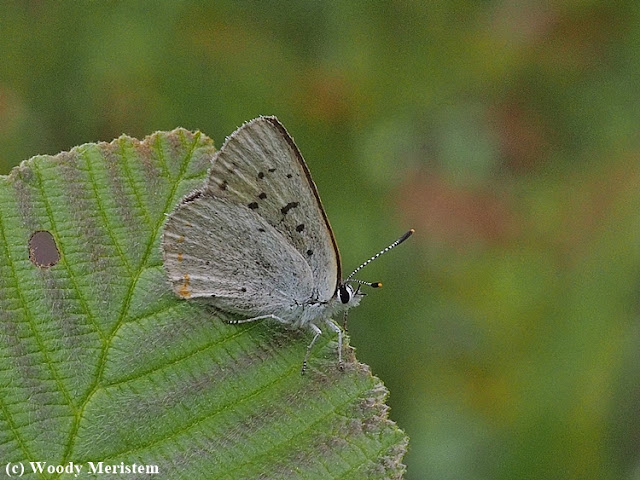 Fens and bogs, as is true with most wetlands, are fragile ecosystems vulnerable to the changes in rainfall and temperature resulting from our changing climate. They’ve also been viewed as mosquito-filled wastelands suitable for filling or draining. One botanically important site I've visited was previously mined for peat and then dammed, inundating most of the area except for a portion that broke loose and created a floating mat.

Posted by Woody Meristem at 8:50 AM

Fascinating! We have a number of intersting fens and bogs here, and I'veexplored several of them.

Educated yet again through your well-crafted words and detailed photos. Thank you, Woody! Kim in PA

How interesting. We have a few places that hold the water here in Florida and then we have marshes that stretch out over a lot of land. I love seeing the flowers there!

Hello, :=) Your nature posts are delightful. Some of those leafhoppers are so colouful, The blue, and green and red ones, are beautiful. I have only seen green Leafhoppers. I am interested in insects, and have one on a recent post that I can't identify. Could you please take a look, and see if you know what it is? Those carnivorous plants are so interesting.
I do hope you can help me with the ID, although I live in Portugal, and not in your
counhtry.