A Great Day It Was

The day began at 4:00am when the alarm went off; by 4:45 I was on the road headed for Pennsylvania’s elk range, sustained by a cup of coffee and a cinnamon raisin bagel. The roads were almost deserted and most of the houses dark.

I passed a cabin with a large lawn where, in all the years I’ve been making this trip, there's never been an elk – lots of deer, but never an elk. But there in the morning twilight was a bull elk with his harem; even though there was barely enough light for photography, it was worth a try – 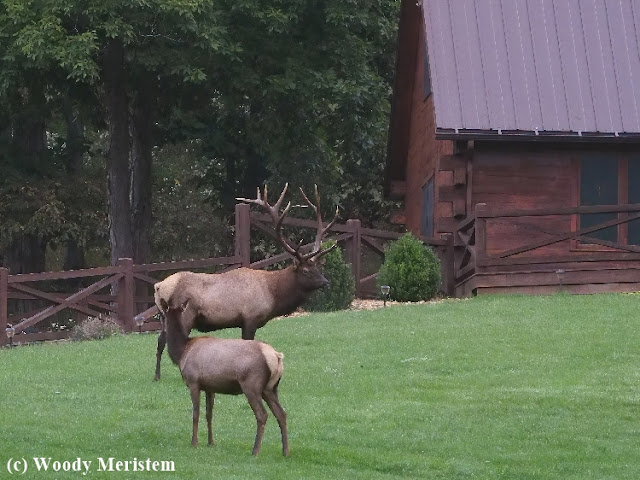 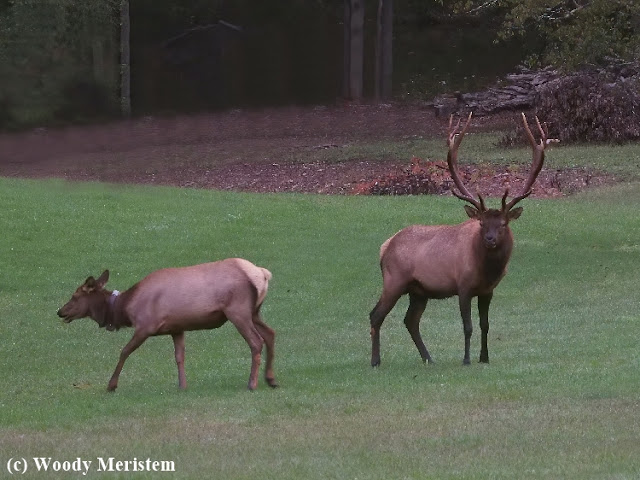 A little way further on there were two young bulls in a field, one with part of a plastic bag stuck on an antler – 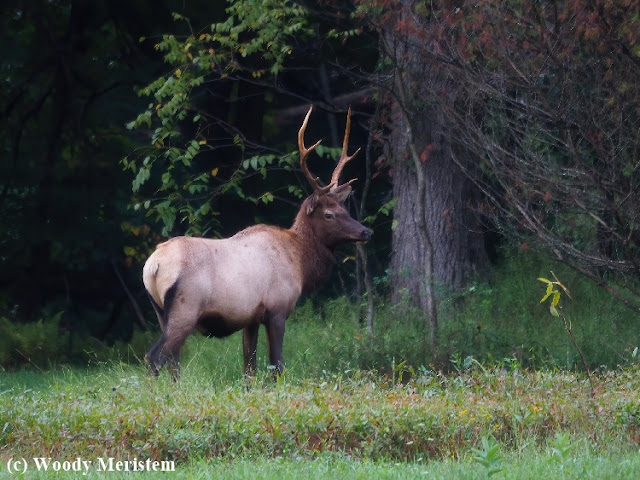 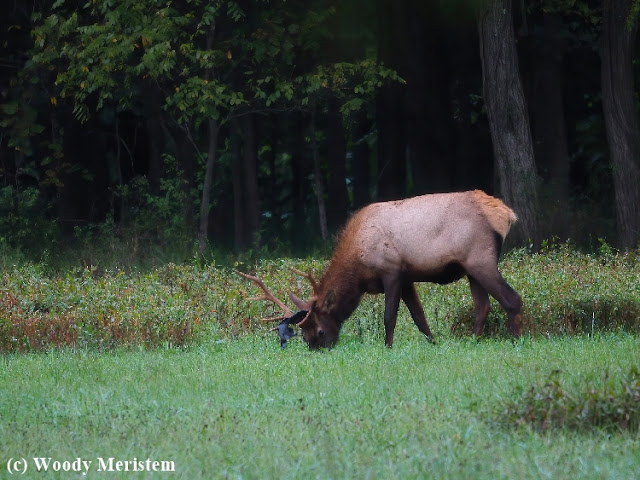 After that the sun rose higher in the sky and the elk retired to the forest to ruminate and rest. But there were still interesting things to be seen as I walked to some of the meadows to look for fresh sign and a spot to spend the evening waiting for elk. A young white-tail buck with antlers still in velvet – 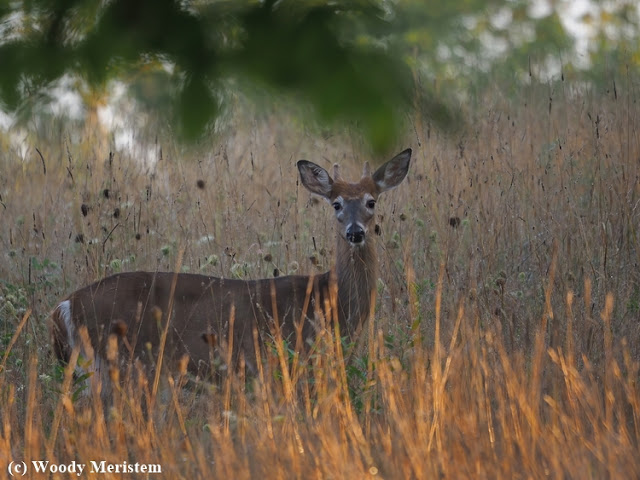 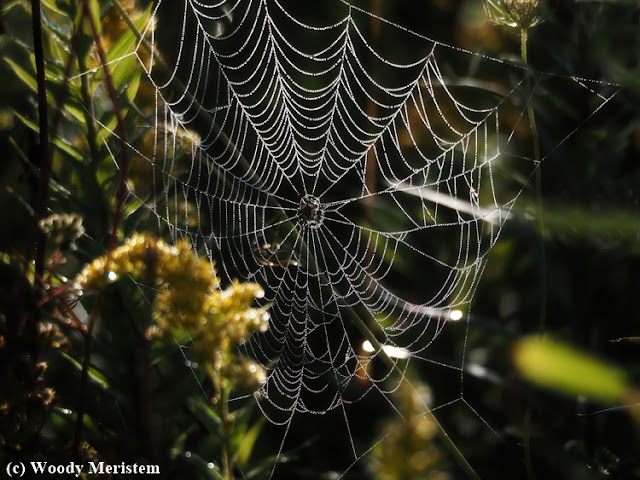 And a banded garden spider - 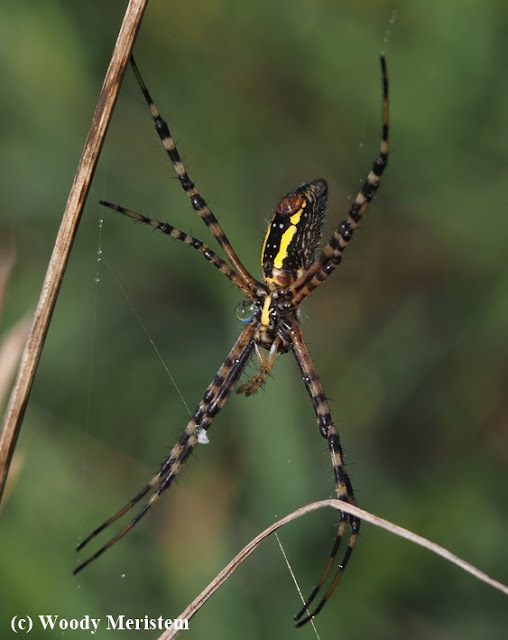 A few mushrooms that I can’t identify with certainty – 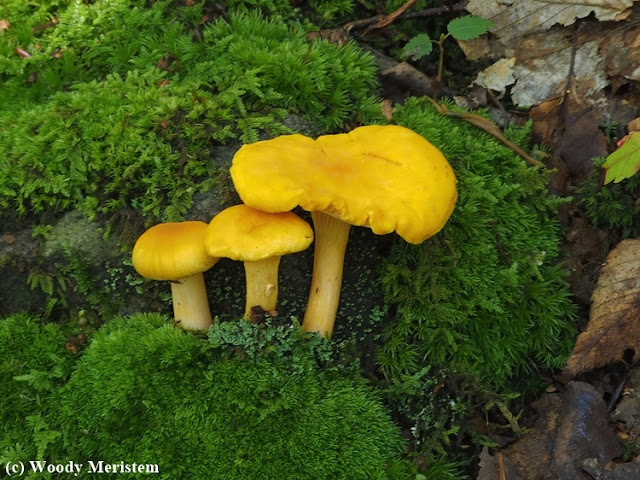 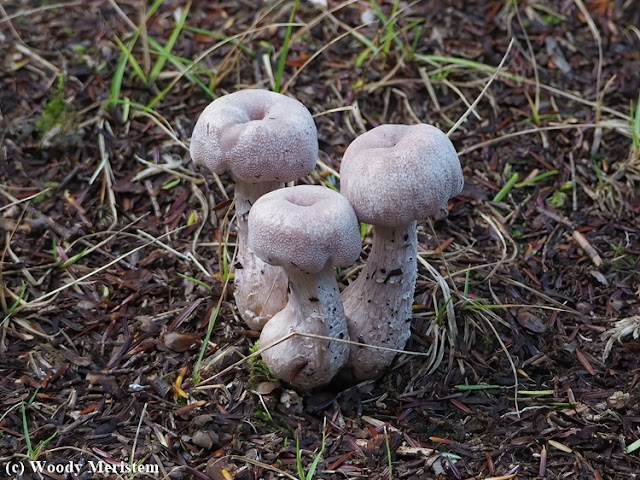 Monarch butterflies headed for Mexico, some already tattered and others in good condition – 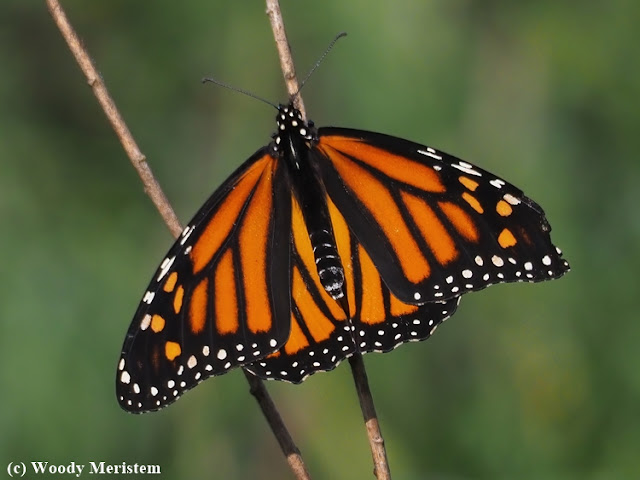 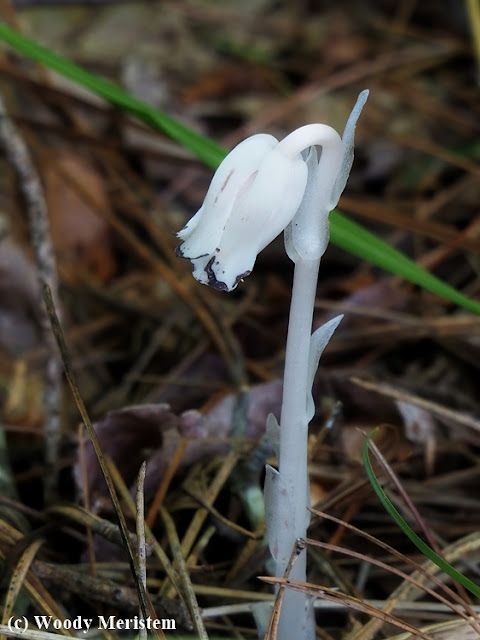 At the edge of one meadow, a flock of turkeys: hens and young of the year – 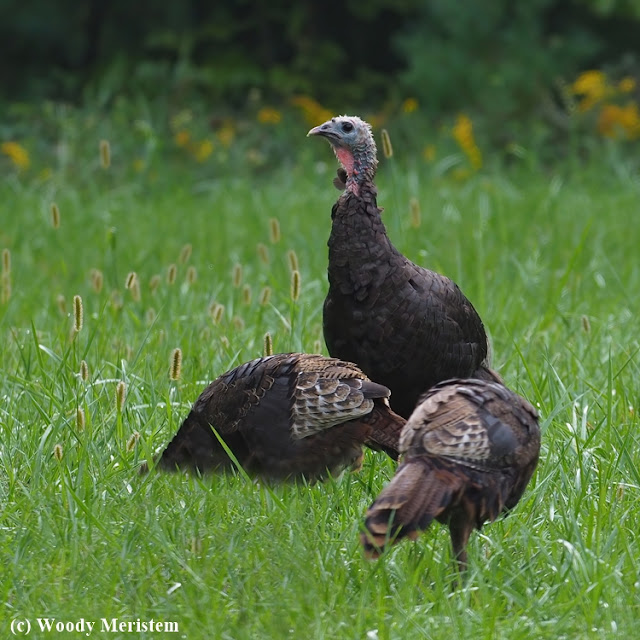 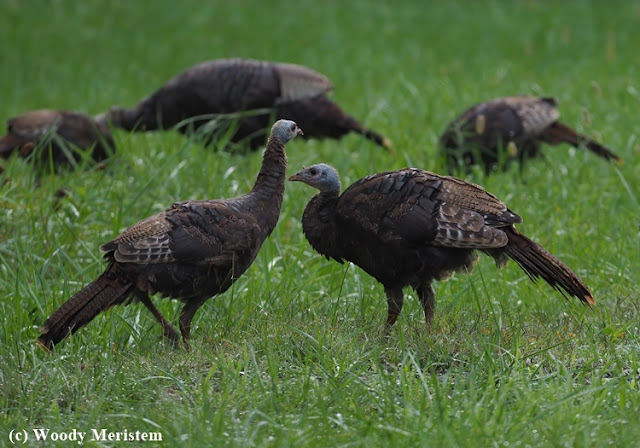 With that it was time for a nap in a shady spot along a stream. Late in the afternoon I headed back to a large meadow where at least three bull elk were bugling from the surrounding woodland. Patience pays and an hour later, with the sun low in the sky, a large bull emerged from the forest and bugled several times – 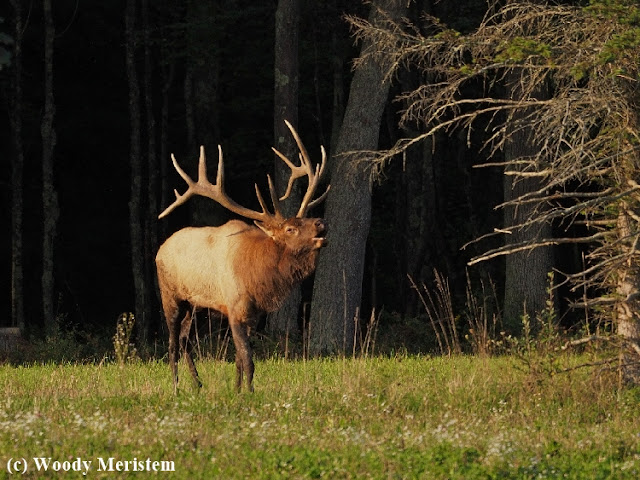 During the rut bull elk frequently wallow in mud to which they've contributed urine, all the better to make them more alluring to the ladies  – 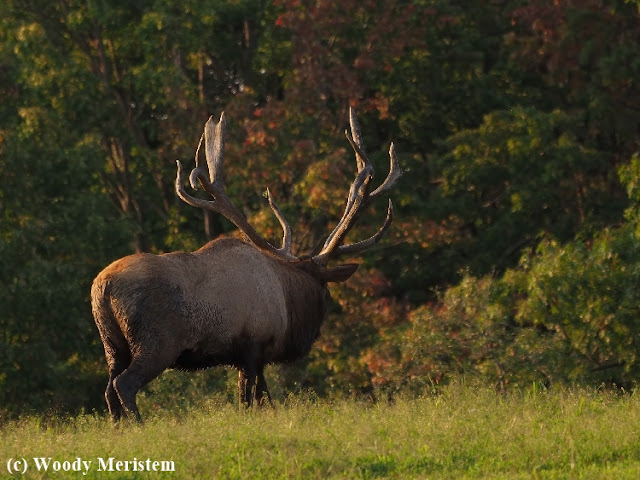 The star of the video stood up and the two bulls ran in parallel, over a small rise where, except for their antlers, they were lost from view and engaged in a short joust – 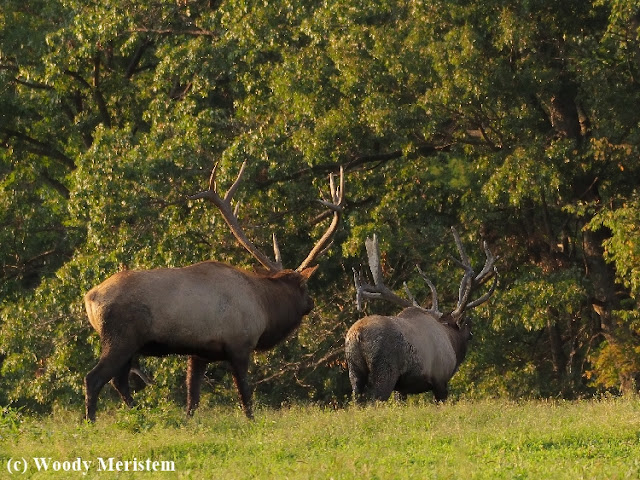 With the light almost too dim for photos it was time to head for home. But wait, there was another bull elk to photograph – one bedded down in short grass beneath an old apple tree – 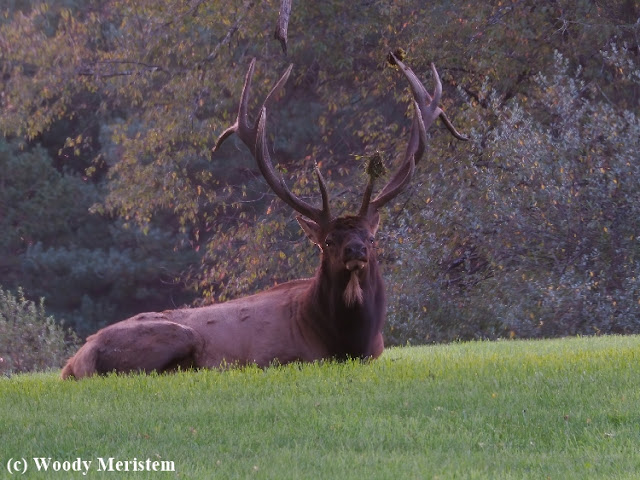 Fifteen miles closer to home was the last elk of the day, a young bull. Just to get a usable photo required the camera to be pushed to its limits and then processing on the computer – here he is – 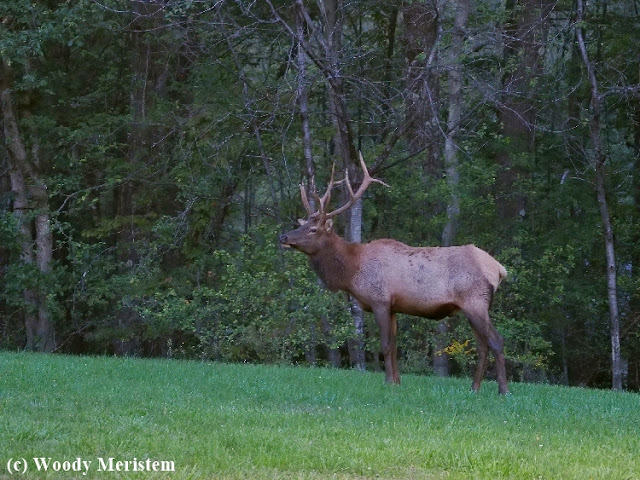 Indeed, a great day it was.

Posted by Woody Meristem at 5:24 AM

Their antler racks are huge. I didn't realize PA had elk. We are headed to Eagle's Mere, PA at the end of the month. I wonder if we will see any.

Wonderful post! Some amazing bull elks! Glad you had such a great day.

These are impressive! Well done.

Hello,
The elk are beautiful critters. Pretty shot of the Monarch. I loved the turkeys too. Great sightings and photos.
Thank you for linking up and sharing your post. Take care, have a great weekend.

I had no idea there were elk in PA (unless I mis-read). They are amazing. The bulls, especially one, are huge. And thank you for adding the video. It was very helpful.

A great day indeed! The Elk are such majestic creatures and how neat to see the wild turkeys too. I know you must have taken a lot of photos and had a wonderful day!