Ruby is a male ruby-throated hummingbird – giving individual human names to wild creatures is not something of which I normally approve, but ... Yeah I know Ruby is usually considered a feminine name, but he doesn’t seem to mind and it’s an appropriate name for a bird of this species.

He was the first hummingbird that visited the feeder hanging outside our kitchen window this spring. From the feeder he’d go to a nearby dead twig to survey his domain. I realize we hold the deed to this property, but several other species also claim the same piece of the world. We don’t mind in the least; they, actually their predecessors, were here first. We hope they don’t mind us too much – although I know some of them would be more comfortable if we, and all other humans, disappeared.

Ruby visited the feeder one evening and then headed to the dead twig to rest and preen before heading back to the feeder. Fortunately the camera was on the tripod awaiting some interesting development, these photos may give you a brief glimpse into the life of a ruby-throated hummingbird. The throat feathers depend on reflected light for their brilliant red color, hence his throat appears black unless the light is just right – 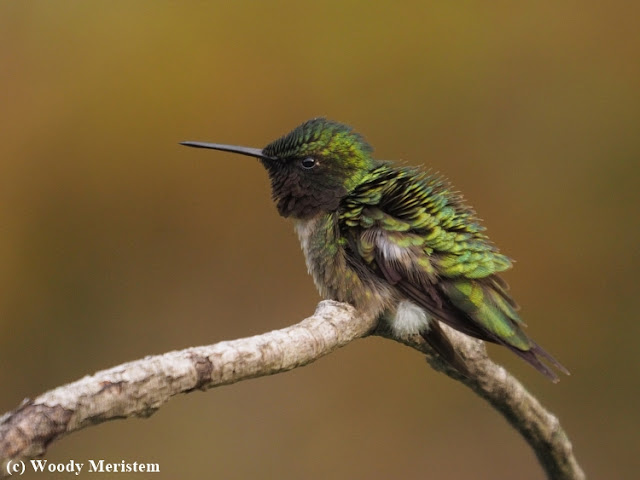 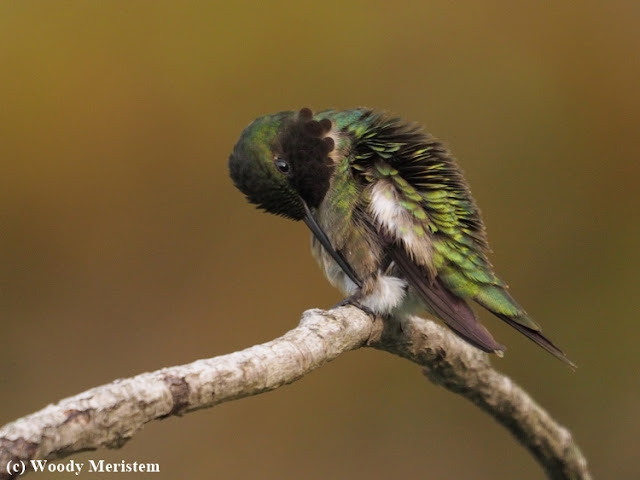 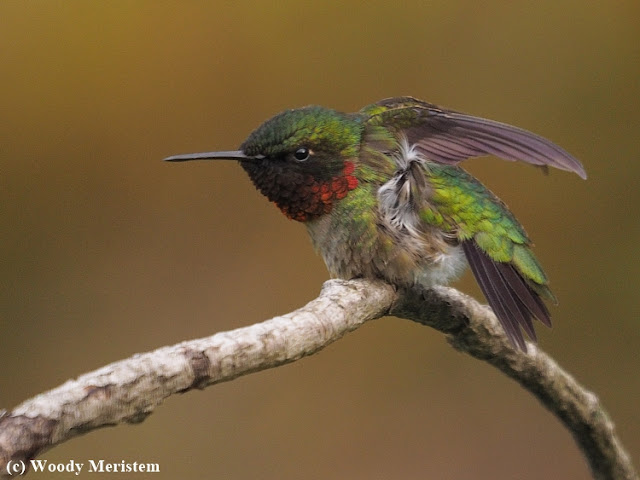 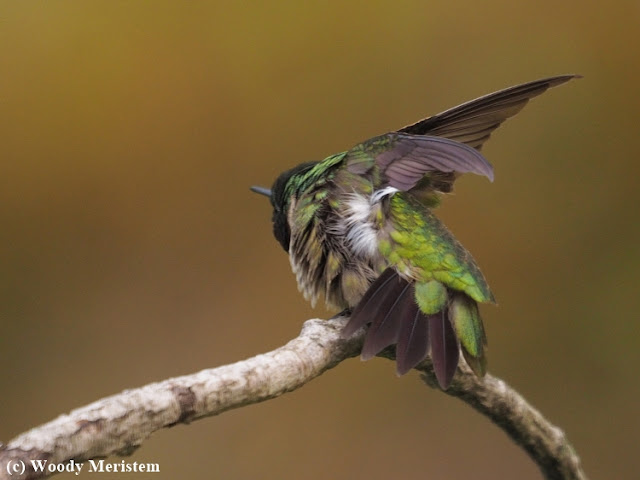 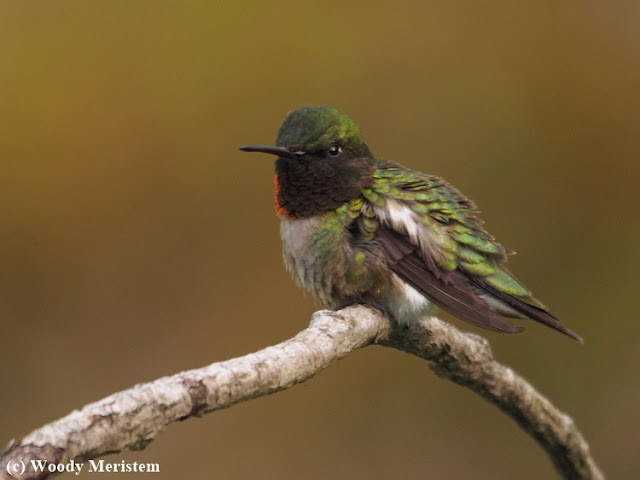 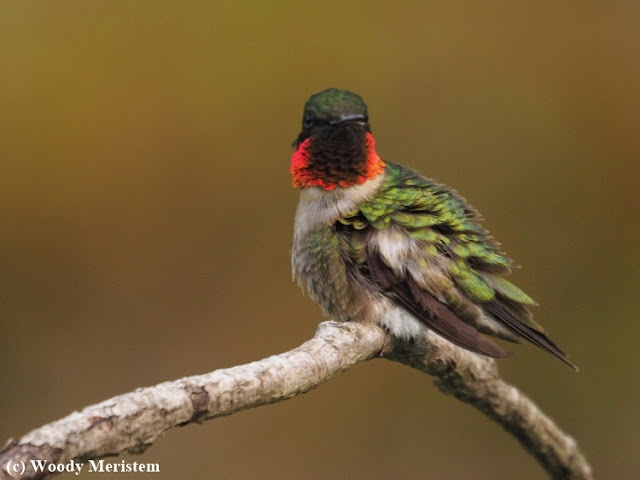 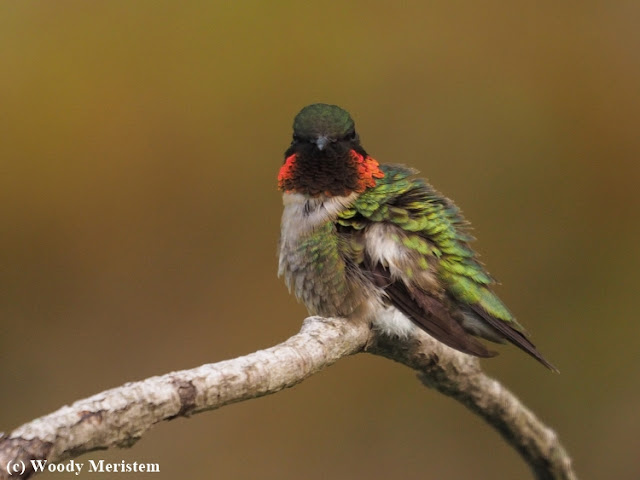 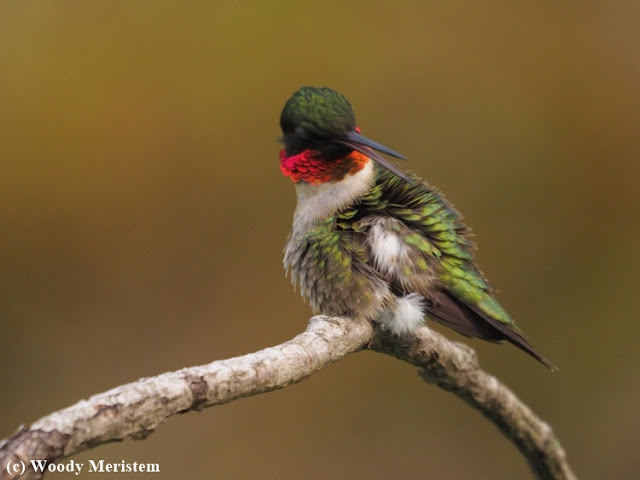 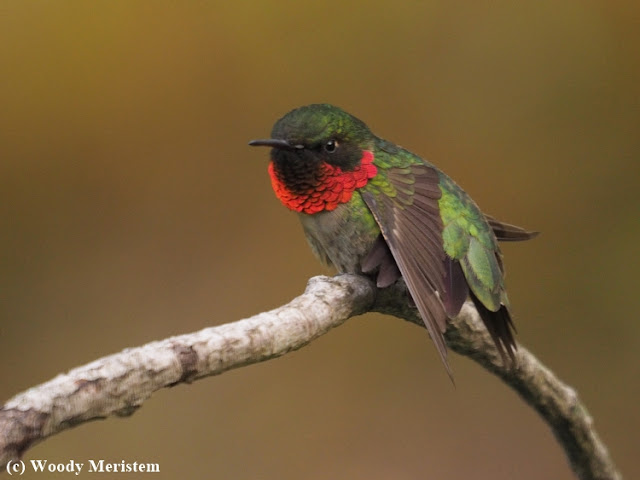 The next day a female ruby-throated hummingbird showed up at the feeder, a mate for Ruby perhaps. Ruby-throats depend on often scarce and widely scattered flowers and so they usually don't graciously share feeders, nor are they faithful to their mates. Ruby may soon begin chasing the female away from his food.
Posted by Woody Meristem at 6:00 AM

What gorgeous photos! Thank you. It's always special for me when a hummer enters the scene.

Great to get such wonderful photos of this gorgeous little bird!

They are lovely wee things!
We name our critters, as we often converse. All the raccoons are Butch! Male or female. We can say, 'Butch is in the backyard!'

We have enjoyed watching the antics of the hummingbird around our feeder. Strange thing happened though. They stopped coming for over a week. Yesterday I decided it was time to replace the sugar water thinking there may be something wrong with the batch I'd put in before. I did see a return of one bird but not the sentry that had been there guarding the feeder.

And Ruby he is! What beautiful colors. I named my fox squirrel Foxy. But I always name my critters and birds! lol I'll have to borrow Ruby for when I see a hummer here...if that's alright!