It’s not the end of In Forest and Field. Instead it’s the end of keeping a camera trap where it had been for five months because the reason to have one there is now gone. Except for some hair, all the remains of the dead white-tail doe have now been eaten or disbursed into the forest ecosystem in which she spent her life.

After the doe’s death she fed a myriad of creatures – eastern coyotes being the largest, the smallest being microscopic life forms, some of which are probably still unknown to science.

Three other posts on this blog highlighted the mammals and birds that gained sustenance from the doe’s body. First came One Dead Deer – Many Diners followed by The Deer Dinner Continues  and then Slim Pickings.

The last videos from the dead deer are here –

Some of the songbirds came to gather hair for their nests, some came, no doubt, to feast on the insects that had fed on the doe’s remains. Most of those insects would have been flies and beetles, but there may have been others. 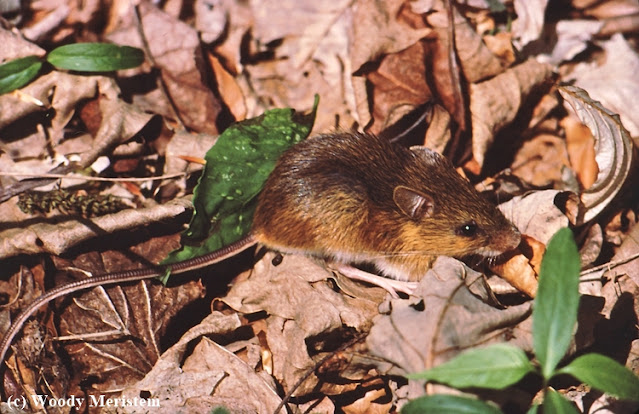 You can never tell what may show up on a camera trap.

I have to admit the title of this entry scared me. I'm glad it wasn't the end of the blog!

All of your camera trap images are so fascinating. I look forward now to what you hope to capture next. And a Woodland Jumping Mouse! Now THAT was quite the capture!

I hope you can find a new spot for your camera! I have enjoyed your videos and slide images.
The mouse is cute! Thank you for linking up and sharing your post. Take care, enjoy your weekend!

Scavengers are amazing! Enjoyed what your camera trap captured all these months.

That's a great video Woody. Thanks so much for sharing! I love visiting here and seeing your videos! :)

It's the circle of life.