When, in January, Bill told us about a dead deer he’d found in their woods I just couldn’t resist putting a camera trap on a tree near the body. The deer was a doe that had made a mistake crossing the road nearby and been struck by a vehicle. The injury hadn’t been immediately fatal and she had gotten into the woods and part way up a short steep hill before she died.

The many, many videos of gray squirrels have been omitted from this video. My apologies to anyone who would like to view 50-100 videos of squirrels – maybe some other time. 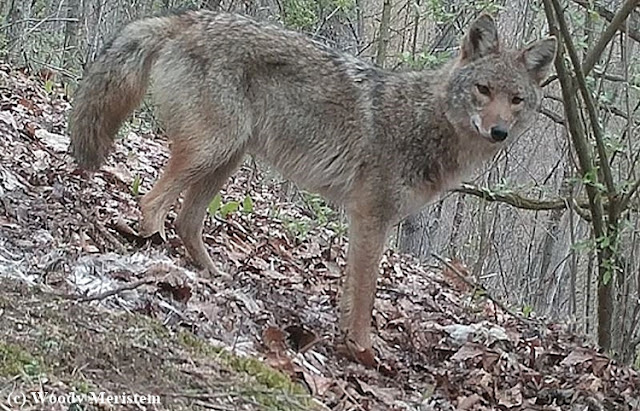 The eastern coyote pair probably has a den nearby and pups to feed so the bones and whatever edibles are on them may now be at the den – wherever that may be. It’s worth finding, but the pups might well be moved as soon as the adults realized someone had been nearby.

Now only a mass of hair and the lower part of a foreleg remain to indicate that a white-tailed deer died on this hillside.

Posted by Woody Meristem at 7:43 AM

Fascinating! Sorry you had to edit out all those squirrel videos!

I enjoyed all the critters and birds. The Grouse is a great capture. The Coyote couple really did enjoy the leftover carcass. I do not mind the squirrels were left out. Great video.
Thank you for linking up and sharing your post. Take care, enjoy your weekend!

It's a good thing to have a dead animal taken care of and this is a good example of the circle of life. More squirrels...maybe next time! heehee!

Nice to see the small ecosystem in action.