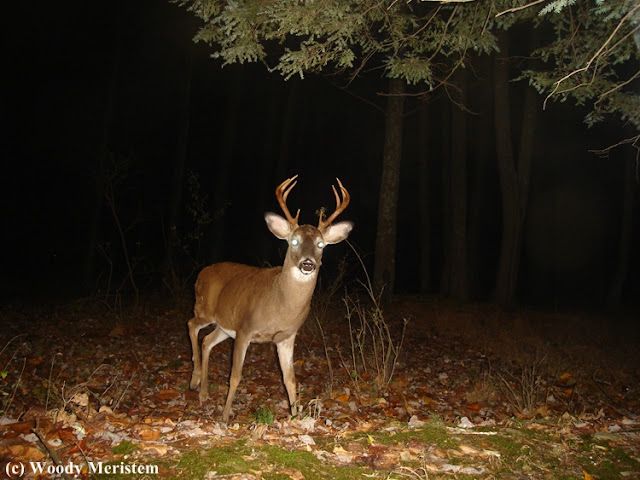 The camera traps on the hill above the house captured videos of bucks that came in search of the does that frequent the area.

The videos were taken at the peak of the rut, only the spike (called 2-point in the video) and the 4-point were around before the rut; then the larger bucks came looking for girlfriends. Those two young bucks were probably 1½ years old and hadn’t dispersed earlier in the year – but they may have dispersed to look for a new home now that the big guys have arrived, the young bucks haven't been caught on camera traps again.


Those big bucks might hang around for a while before most of them gradually make their way back to the home ranges they occupied earlier in the year. Others may find our area more to their liking and stay here.
Posted by Woody Meristem at 5:13 PM

Great video and photo of the buck! Thank you for linking up and sharing your post. Happy Saturday, enjoy your weekend.

Woody Meristem
A life-long naturalist, managing natural and human impacted ecosystems has been my vocation for more than 50 years and I've been photographing those ecosystems almost as long. Husband of a wonderful lady, father of two and grandfather of three, resident of northcentral Pennsylvania.