It’s summertime in elk country and the living is easy – at least relative to much of the year. So far this has been a rather wet summer and the vegetation is lush and growing rapidly. All the meadows and food plots in Pennsylvania’s elk range are still spring green – 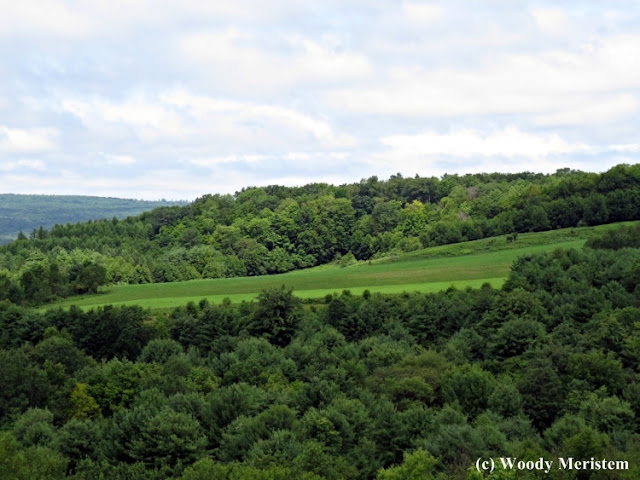 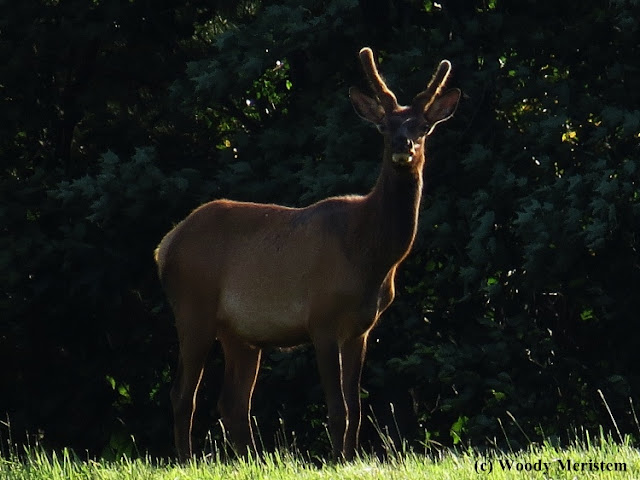 He was soon joined by a cow – 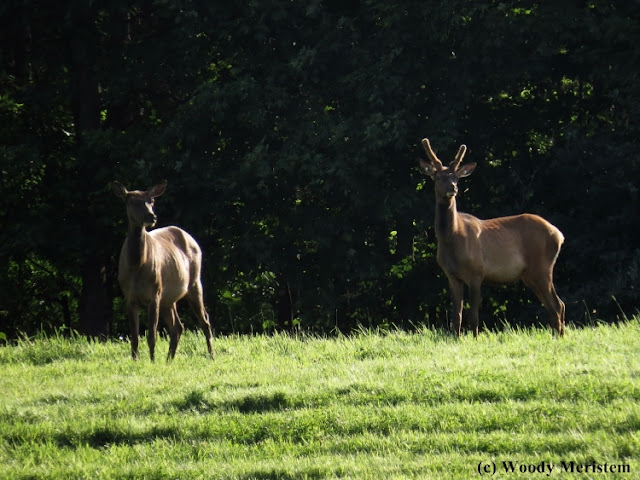 And then by a few more cows, including one that was accompanied by a young calf – 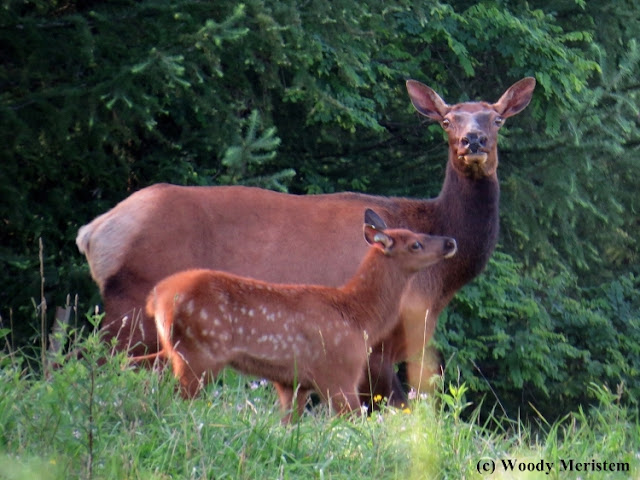 Toward the other end of the large meadow/food plot there were a couple of adult bulls - one quite far away. Their antlers, while still in velvet, were almost full-grown – 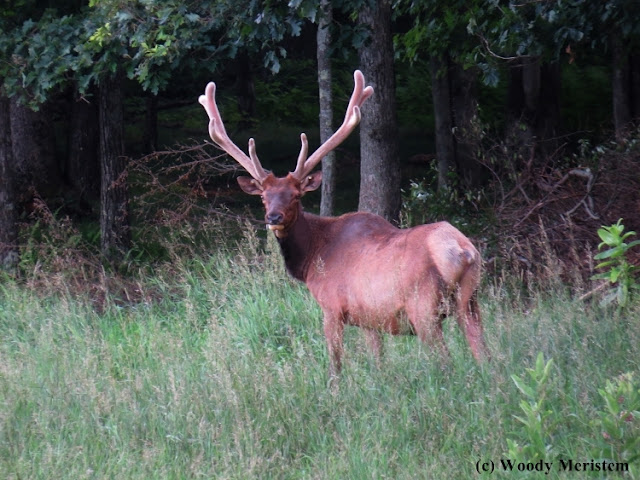 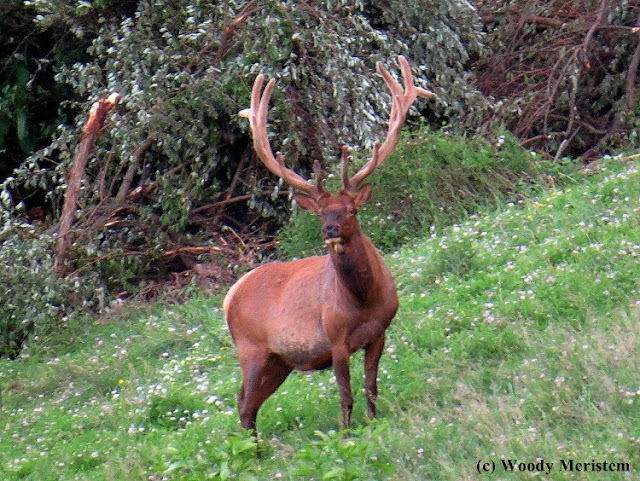 Later in the evening, there were seven bulls feeding in a field close to the road. Thoroughly habituated to humans, they wouldn’t interrupt their feeding as cars stopped and camera shutters clicked – 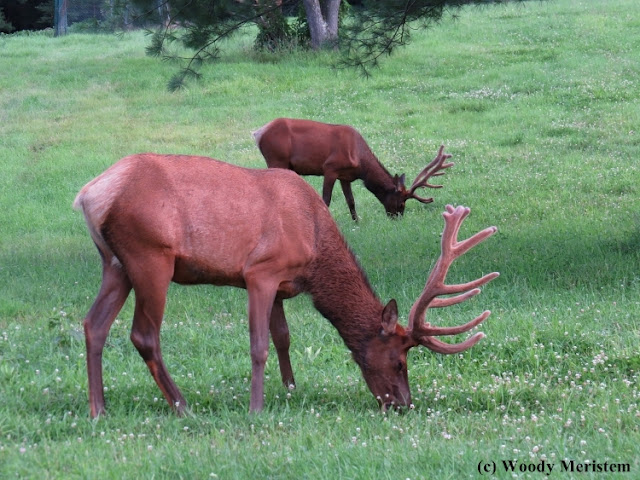 As great as the elk viewing and photography were that day, the real highlights were birds, the singing male grasshopper sparrow I photographed in a large reclaimed strip mine being managed for elk – 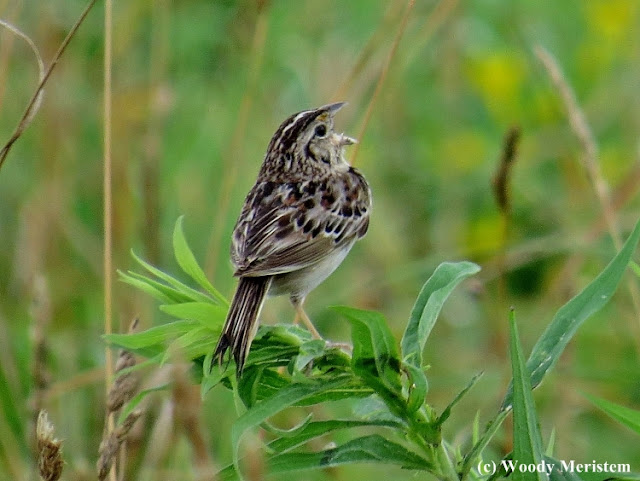 Grasshopper sparrows are birds of the grasslands that are increasingly scarce in northcentral Pennsylvania as former hayfields are planted to corn or soybeans or revert to forest.

Earlier, I managed to photograph a monarch butterfly and a ruby-throated hummingbird momentarily sharing a milkweed blossom. 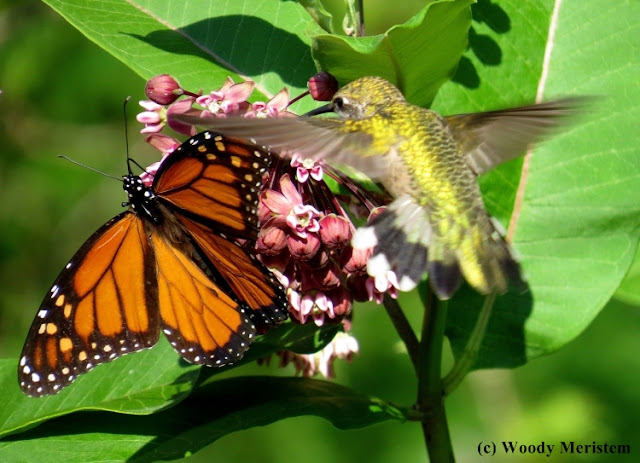 It was a great day to be spending time in the natural world.

Posted by Woody Meristem at 6:00 AM

Looks like it was a good day in the woods! Those Elk are magnificent!

Another blogger sent a private message suggesting I comment on the origin of Pennsylvania's elk herd -- Here 'tis:

The last of Pennsylvania's native elk were killed in the 1860s and 70s. In 1913-1915 145 elk were brought in from Yellowstone and released in a number of locations in the northern and eastern portions of the state; at the same time 22 were purchased from a private game preserve in the Pocono mountains (their ancestral origin is unknown) and released in the eastern part of the state.

Hunting seasons were held from 1923 until 1931 after which no elk were legally killed and the population dropped to something less than 50 animals during the 1950s and 60s. Interestingly, the last of these elk hung on in the same area were the last of the native elk had been found. In the late 1970s the PA Bureau of Forestry and the PA Game Commission began habitat work, reclaiming old strip mines into meadows and herbaceous food plots and regenerating older aspen stands. The herd has increased to somewhere around 1,000 animals and hunting seasons have been reinstituted even though much seemingly suitable habitat remains unoccupied.

The elk are just magnificent !!

I didn't think that you could top that but given the shortage of monarchs in the last few years, capturing one alongside a hummer is just amazing! :)

Wow, awesome sightings of the elk! I love the pretty sparrow shot and the hummer. Great post! Thank you for linking up and sharing your post. Have a happy weekend!

Interesting to see a hummer and butterfly wanting to sip from the same plant! How sad about the grasshopper sparrow's loss of habitat. We humans are destroying so much!

Interesting history on the Penn Elk too.
Wonderful post.

A great day you had. Great to see the Elk, bird and butterfly. Have a wonderful weekend

What a catch, the hummingbird and butterfly at once!
~

Fantastic elk shots! Wonderful! I also loved the grasshopper sparrow and the hummer!